One Reddit user recently won a huge sum of money 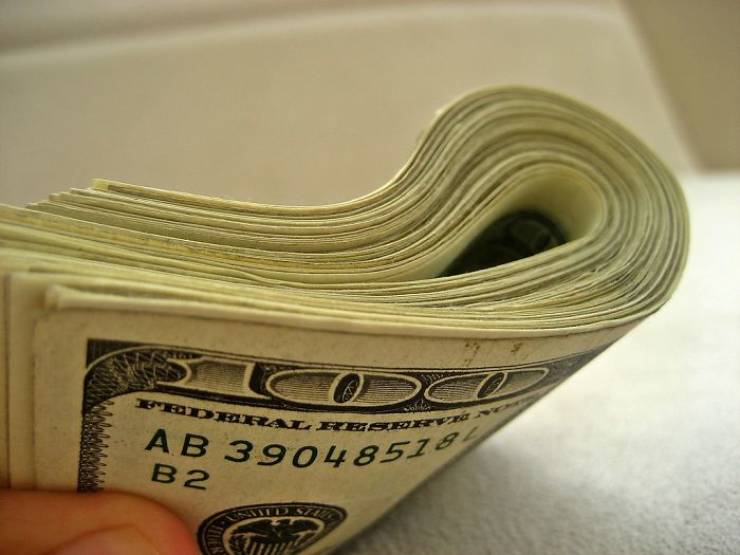 Binkies123 shared his worries that he may have acted like a jerk to his girlfriend with the subreddit ‘Am I the A**hole,’ an online community that helps people stuck in dilemmas figure out whether or not they were on the right side of history in a fight. This subreddit has a very large following: 1.1 million people and counting are members. 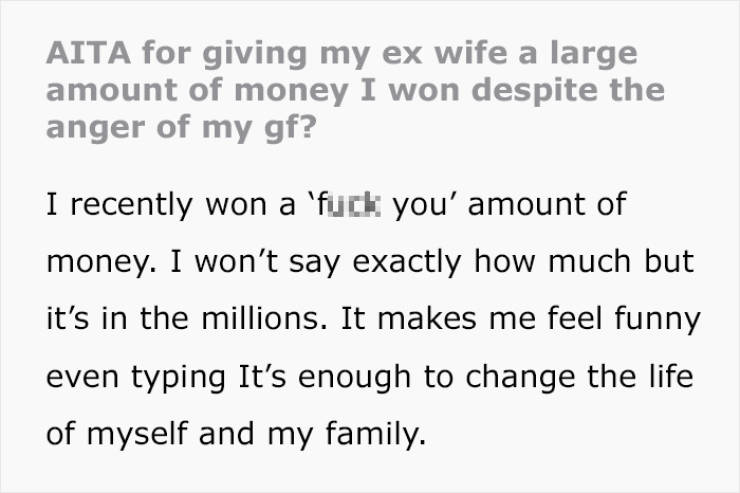 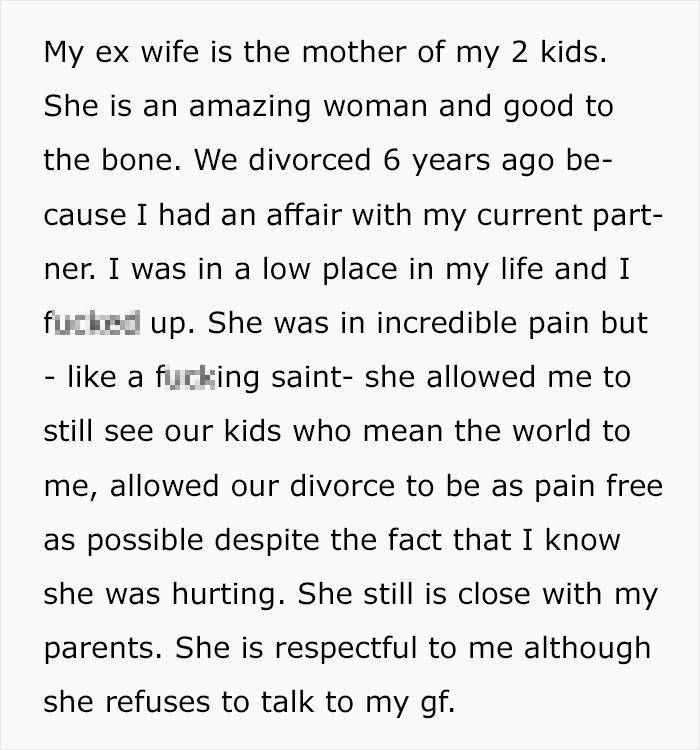 Reddit user Binkies123 explained the whole situation, including how he and his wife got divorced, because he cheated on her with his current girlfriend.

“My ex wife is the mother of my 2 kids. She is an amazing woman and good to the bone. We divorced 6 years ago because I had an affair with my current partner,” Binkies123 wrote online. “I was in a low place in my life and I [messed up]. She was in incredible pain but —  like [an effing saint] — she allowed me to still see our kids who mean the world to me, allowed our divorce to be as pain free as possible despite the fact that I know she was hurting. She still is close with my parents. She is respectful to me although she refuses to talk to my gf.” 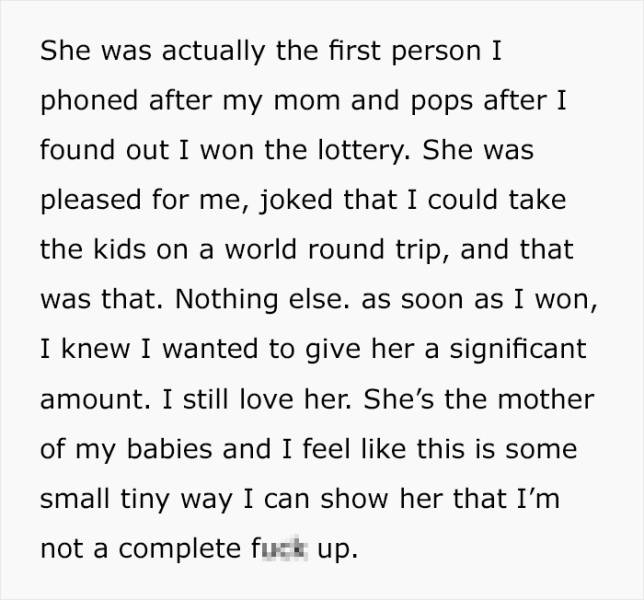 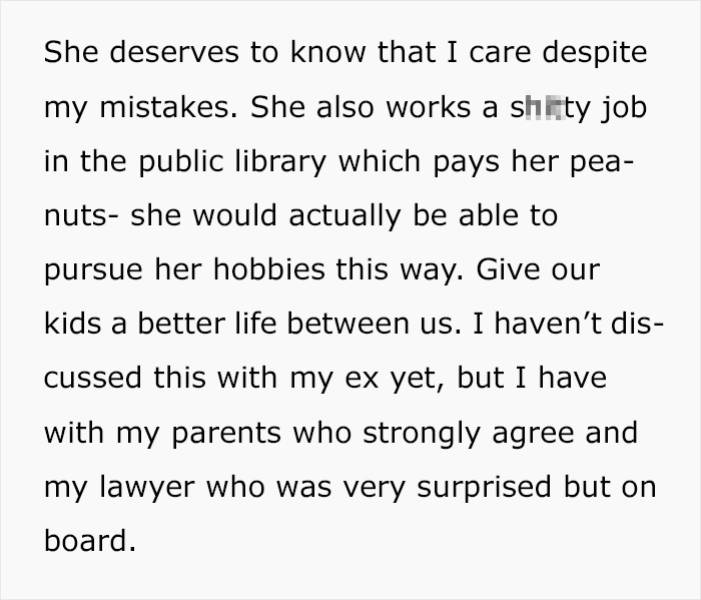 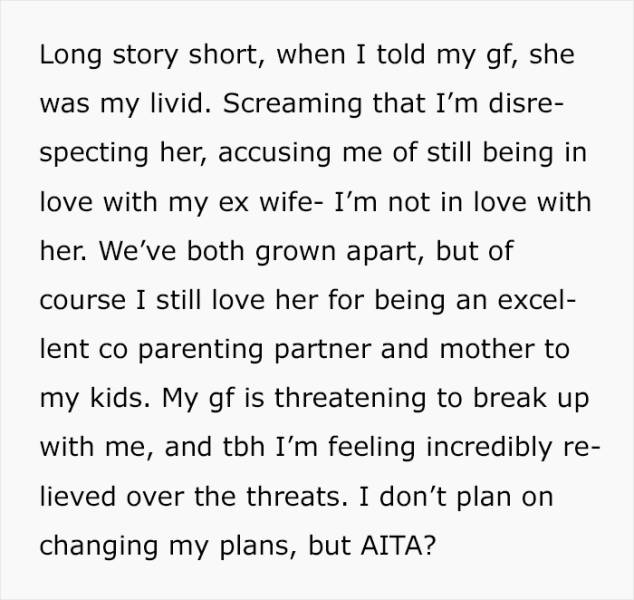 Binkies123 also mentioned that his ex-wife was one of the first people he phoned after finding out he won the lottery. He then decided to give her a large part of his lottery winnings, for her sake and for their kids’ sake.

However, the moment he told his girlfriend what he was planning to do, she went ballistic, “accusing” him of being “in love” with his ex. She even threatened to leave him. Reddit exonerated Binkies123 and declared that he wasn’t a jerk. But what do you think about the situation? Do you believe Binkies123 acted in the right way? Let us know in the comments section below.

While we should all congratulate Binkies123 on being fortunate enough to win the lottery, we really shouldn’t be jealous of him. Why? Because of a study that was done in 1975.

Researchers measured the amounts of happiness lottery winners and catastrophe survivors got from everyday activities like talking with friends, eating breakfast or getting a compliment. As it turns out, the thrill of winning the lottery doesn’t last long. We get used to being rich. Just as we get used to having been badly hurt in an accident. That means that eventually, no matter how good or bad our luck, we all return to our personal happiness baseline: we end up just as happy as we were before winning the lottery or getting into an accident. Perhaps that’s why Binkies123 had no qualms about his plans to give a significant chunk of his money away?

This is what people said about Reddit user Binkies123’s actions 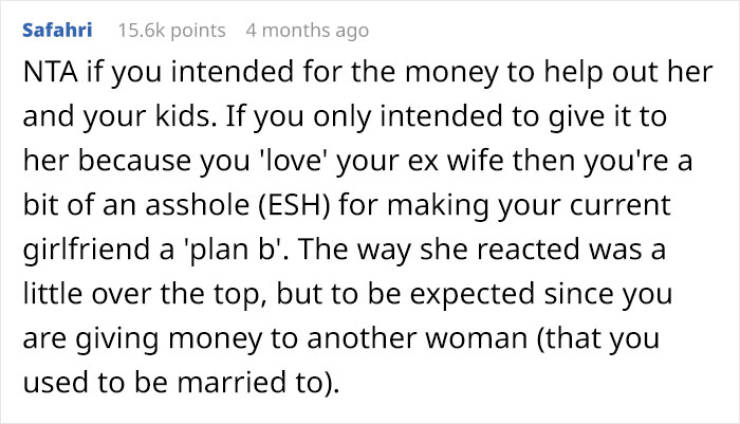 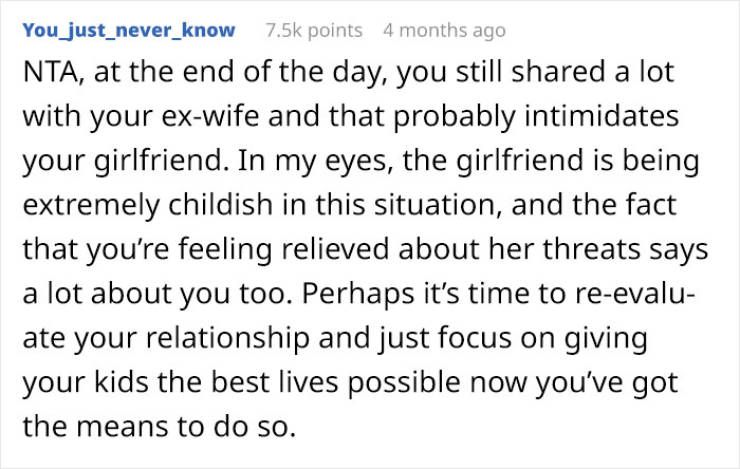 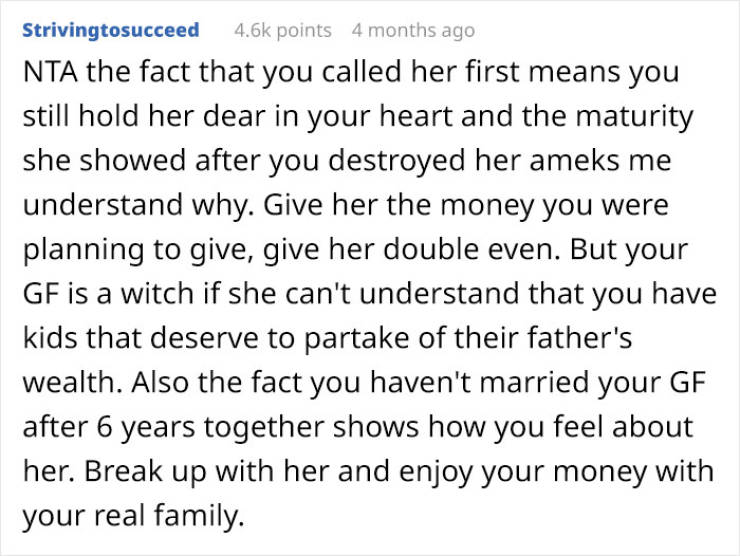 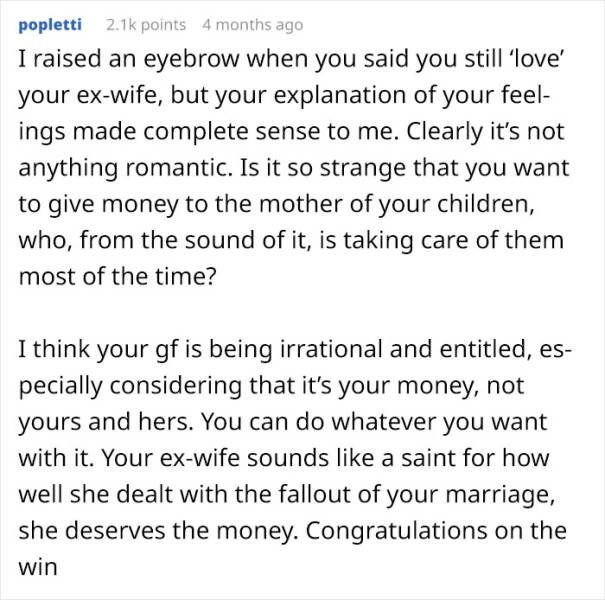 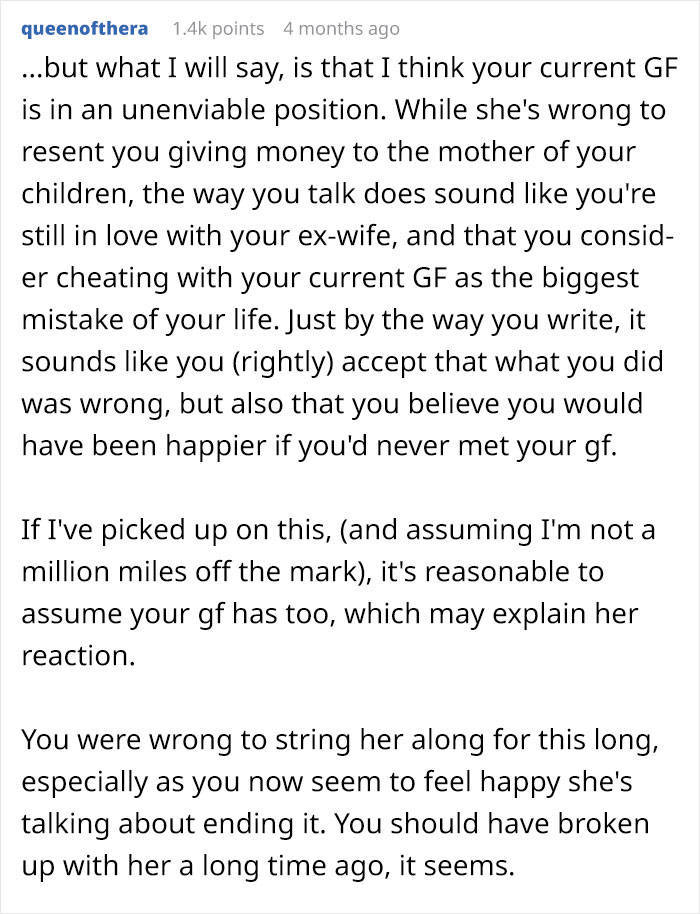 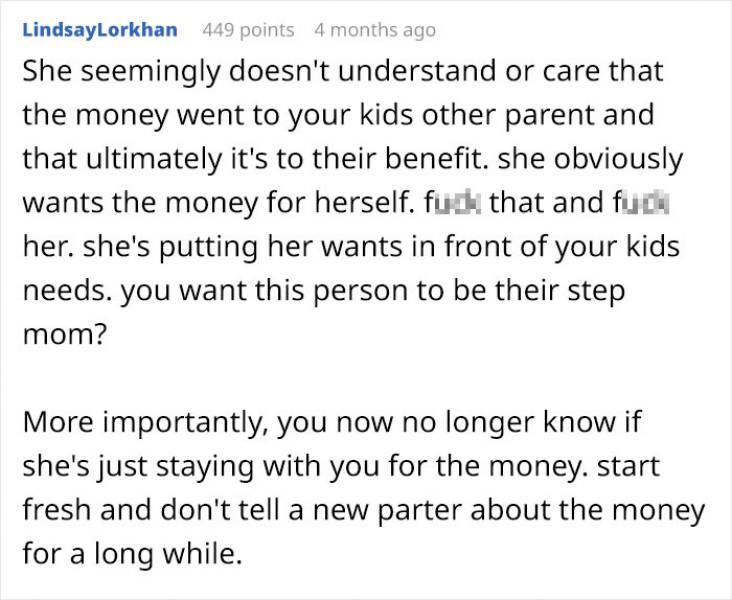 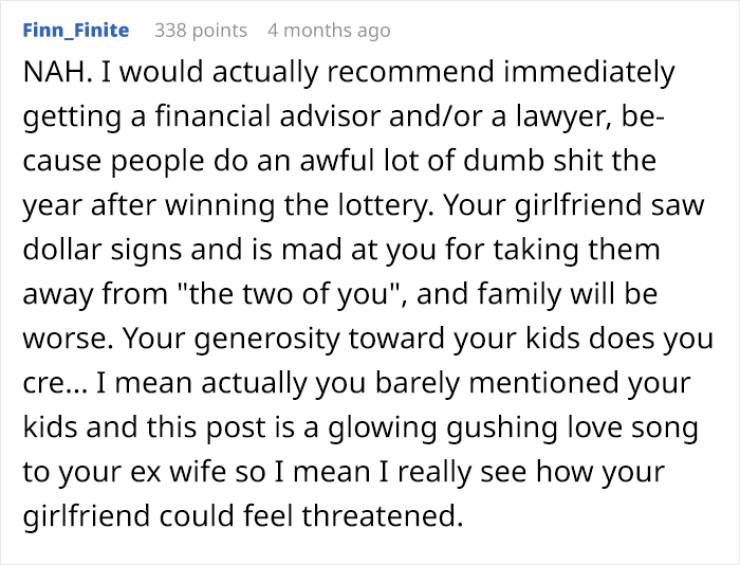 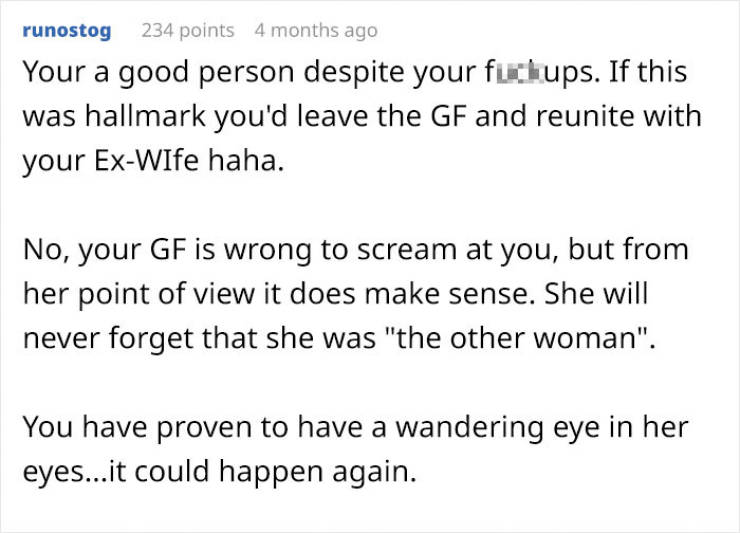 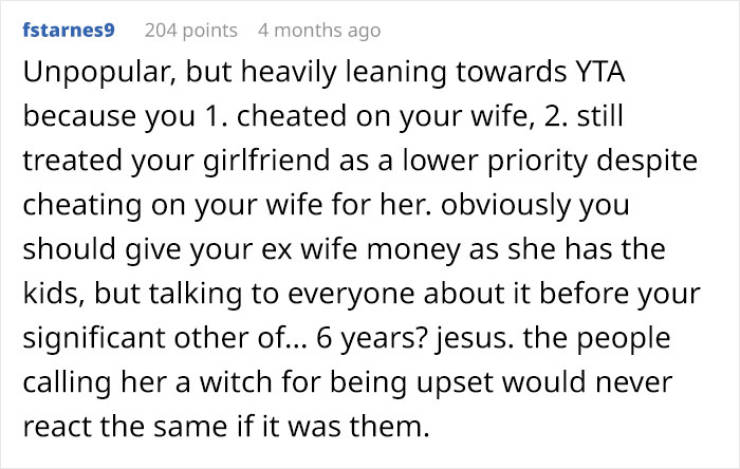 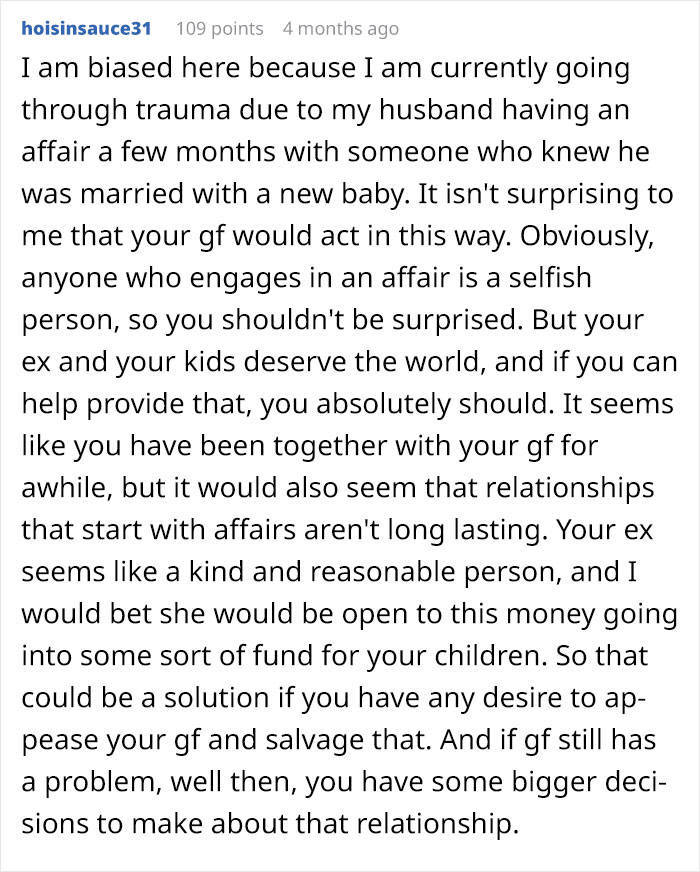 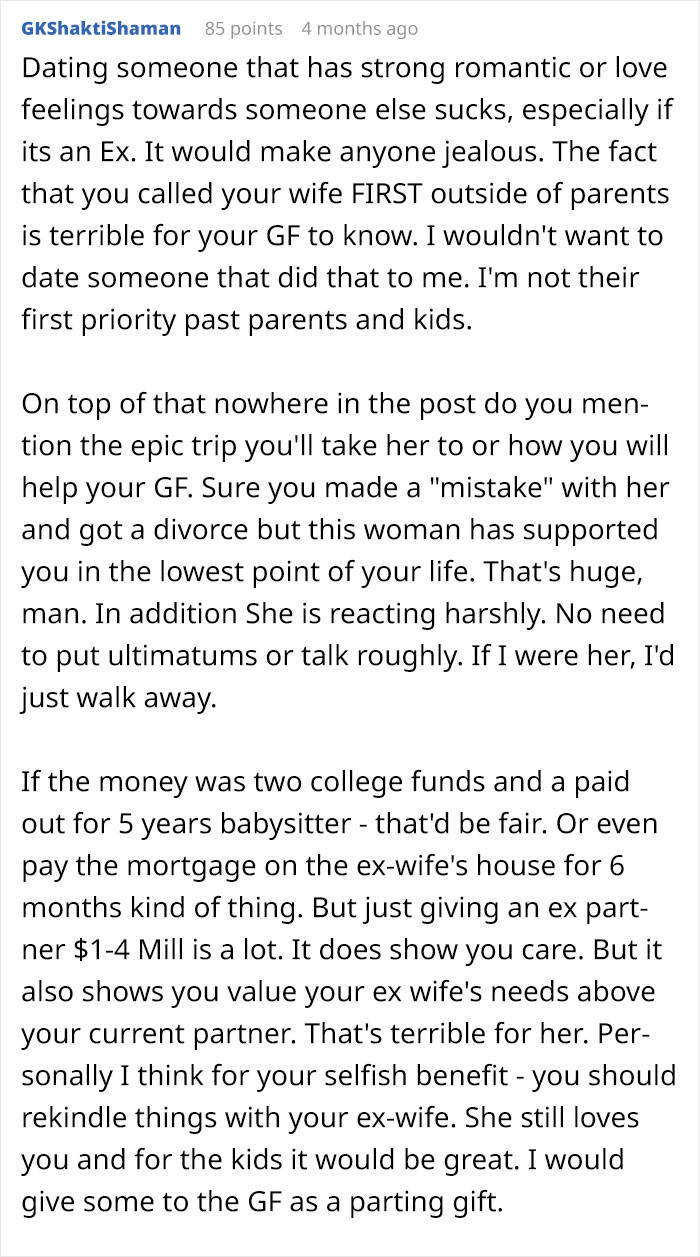 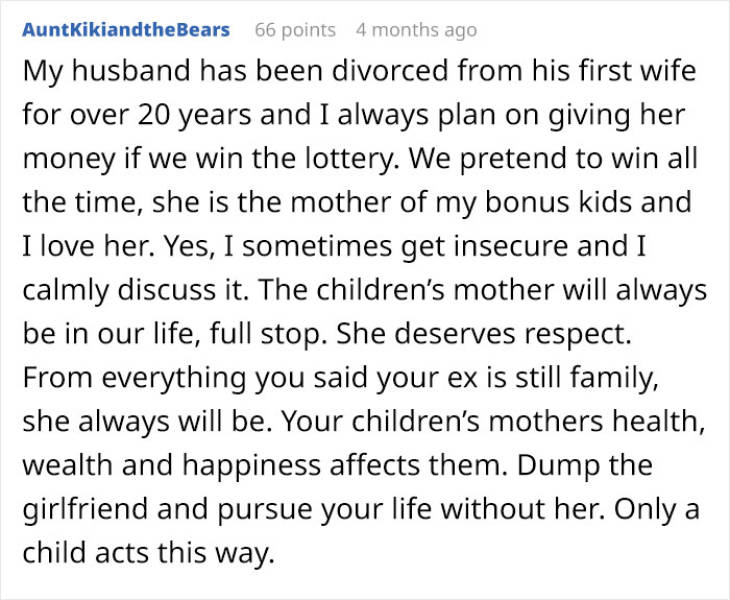 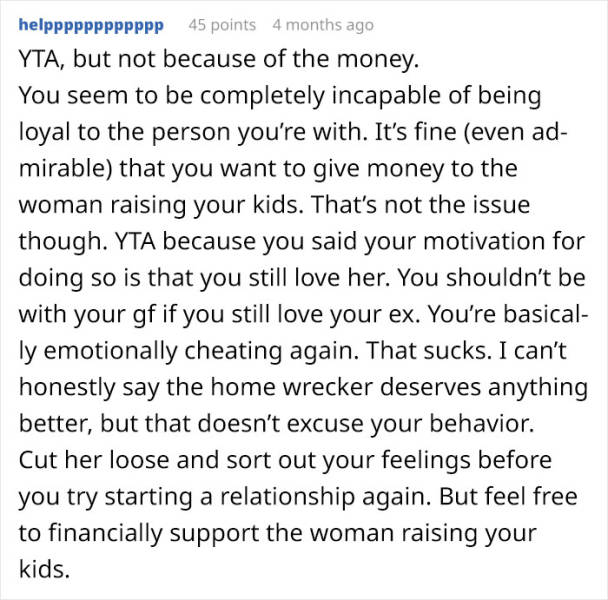 Pants 10 month s ago
these people along with the GF are wrong, its possible to love someone but not be "in love" with them

I love my ex, I'm just not 'in' love with her, as for GF's, I've told my daughter who is 33 that I would never consider marrying someone else ever again and when she asked why I just told her

if I was this guy, I would deep six the GF, buy a modest motor home and travel around the country full time and on school vacations I would call my ex and tell her that I'm in Disney World and there's tickets waiting for her and the kids at the airport

oh and I'd adopt a stray from the pound, maybe 2
Reply
1

Court 10 month s ago
His money, his choice
Reply
1