95% of the population are men. 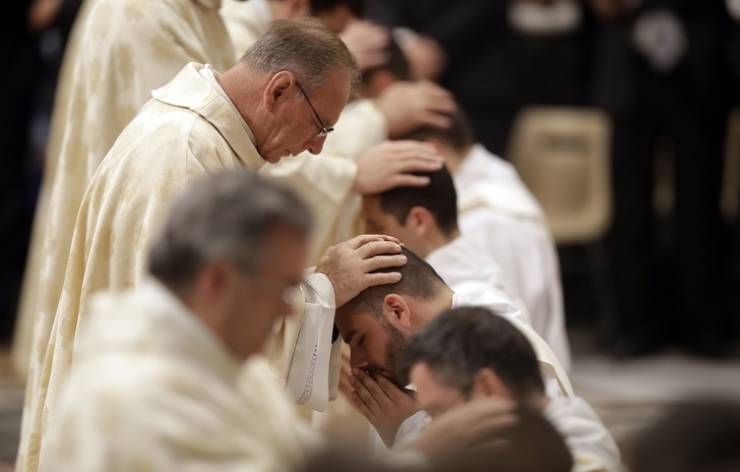 The population of the Vatican consists mostly of ministers of the church and military (Swiss Guards). Accordingly, they are all men, who make up 95% of the citizens. The rest are socialites that consist of the wives and kids of the Swiss Guards.

The Vatican’s citizenship is issued temporarily. 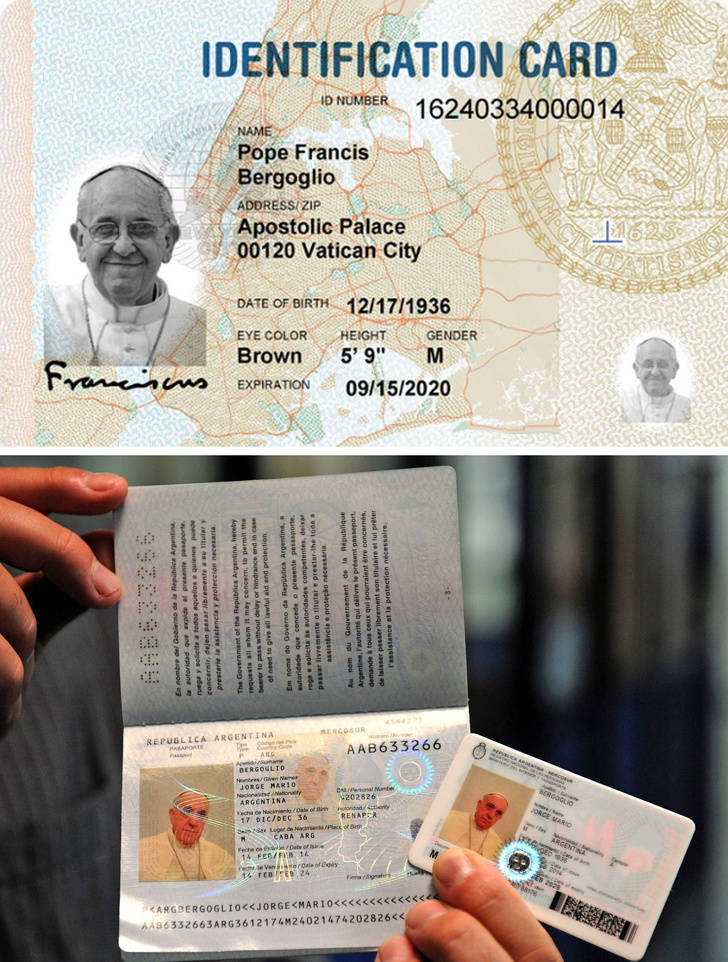 Citizenship can be obtained by state workers and their family members. The passport of a citizen of the Vatican is equivalent to a diplomatic one, and, of course, there are very few of them. Upon completion of the service to the Holy See, citizenship is automatically changed to Italian. It’s forbidden to live on the territory of this enclave after you no longer have citizenship. Children lose their citizenship when they reach the age of 18 or when their parents lose it.

This whole tiny state is under the protection of UNESCO. 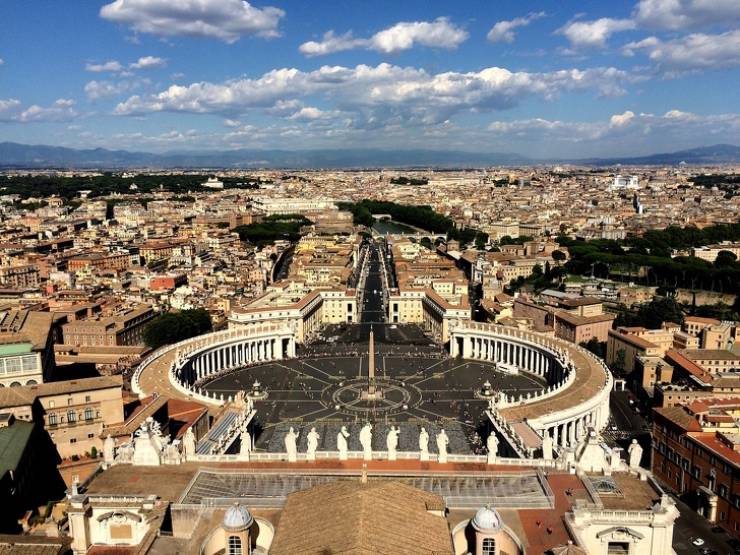 This UNESCO World Heritage Site is huge, but still, Vatican City is the only state where the entire territory is under its protection. And each building is considered a site of interest. 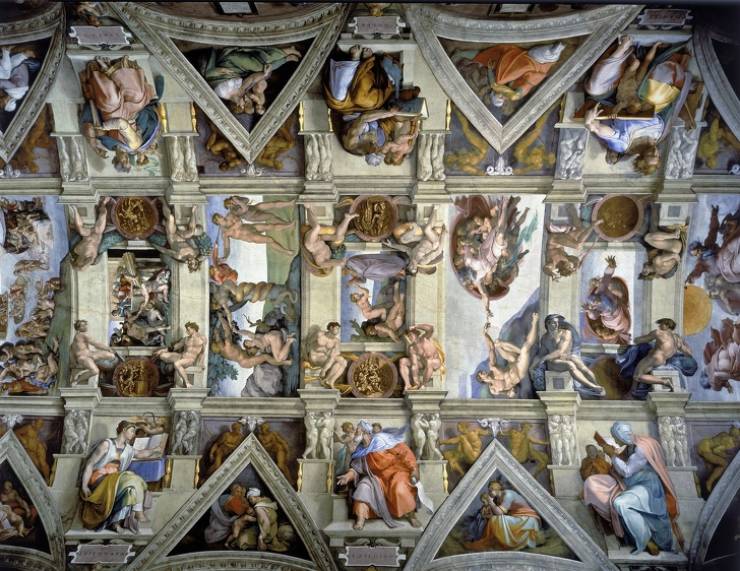 Many tourists come to the Vatican for one main reason — to see the Sistine Chapel. Even avid travelers are amazed at its size and realistic look. One can look at it endlessly and there are special benches around it for this purpose. It is forbidden to take pictures, and you’re only allowed to whisper when you’re inside the building. Special workers make sure that visitors don’t take pictures, but some people still manage to secretly take a photo of the masterpiece. Also, the same workers periodically say “Silence!” in a warning manner.

The position of “mural cleaner” of the Sistine Chapel officially appeared in 1543. The murals used to fall off due to appearance of cracks and saltpetre it has been restored several times. The walls and ceiling were cleaned of candle soot, dust, and exhaust gases. The last restoration was done about 25 years ago and its biggest part was financed by the Japanese company Nippon Television Network Corporation that spent $4.2 million on it. The Chapel is visited by about 10,000 tourists a day.

You can see the Pope lying in front of the alter on Good Friday. 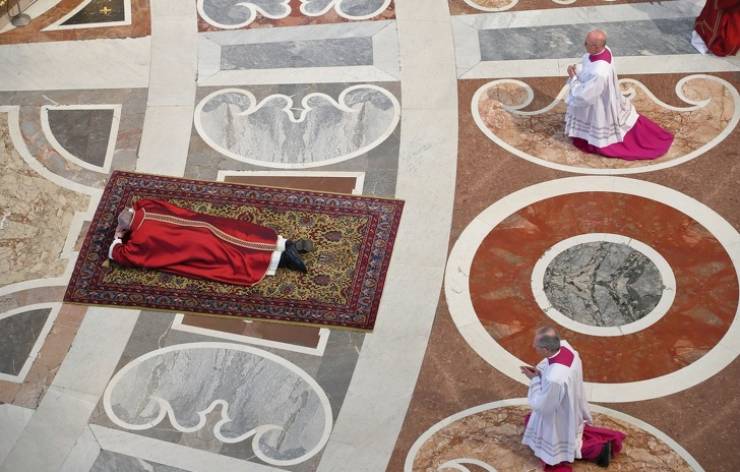 On Good Friday, various church services are held in the state, one of which is called the Passion of Christ. It starts with a ceremony where the Pope, while wearing a red robe, lies in front of the altar with his face down, while priests kneel behind him. At this moment everyone is praying in complete silence and then the prayer for Good Friday is said aloud.

In order for an ordinary woman to be able to live in Vatican City, she needs to marry a member of the Swiss Guard. 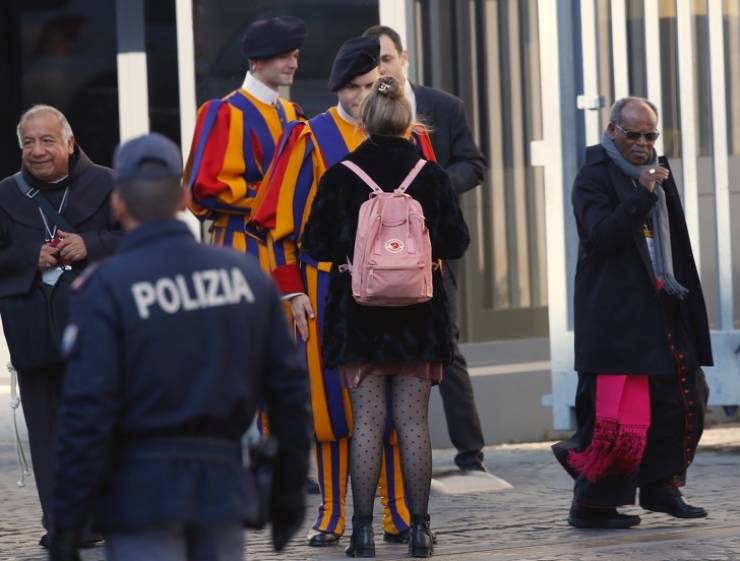 If working within the territory of Vatican City is somehow possible for an ordinary woman (like at a radio station or with a newspaper, for example), staying here to live is almost impossible. However, there is at least one method that could allow a woman to do this — marry a member of the Swiss Guard. But there are a few obstacles here. A member of the Swiss Guard can tie the knot only with special permission and only after receiving the title of a corporal, while the future bride will have to get the Vatican’s permission. There is also one more interesting fact — the Swiss Guard only hires bachelors.

Vatican City is the only state in the world with a zero birth rate. 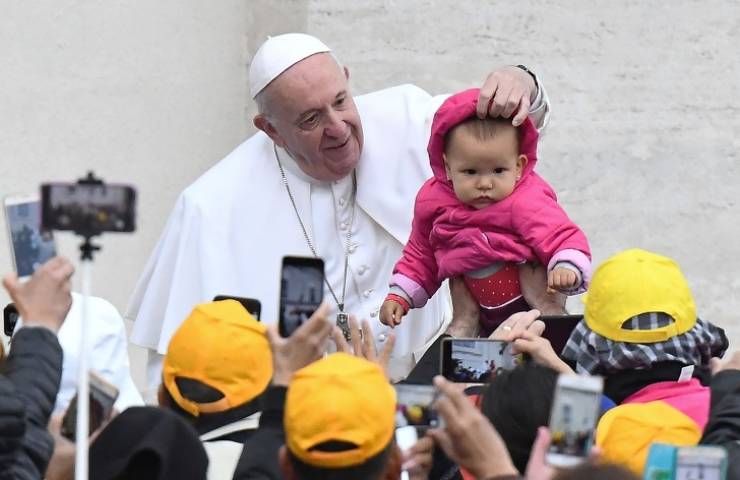 This is explained by the fact that there are no maternity hospitals within the territory of this small state. The babies of this enclave’s citizens are born in Roman hospitals.

The Italian Embassy of the Vatican is located in Italy itself. 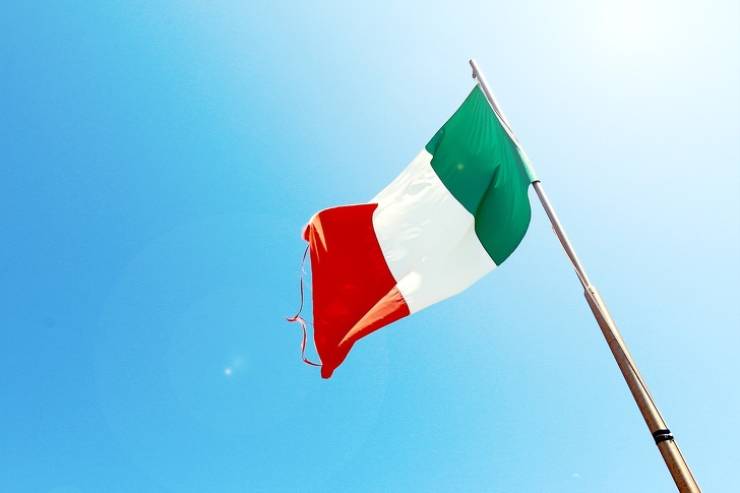 Vatican City’s Italian Embassy is unique because it’s located in the territory of its own country. This is due to the fact that the Vatican’s territory doesn’t allow for the placement foreign representatives. That’s why Italy and the Vatican have set a bunch of agreements, according to which, all embassies accredited to the Holy See are located in Rome.

There is a gas station in the territory of the enclave. 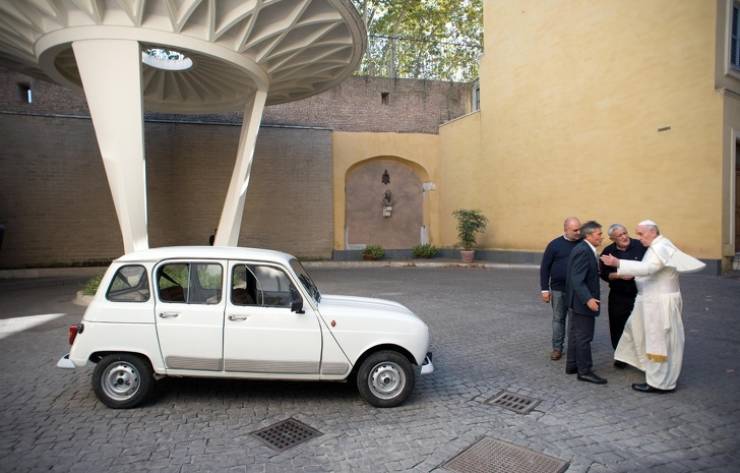 It might not seem surprising that a separate state has its own gas station. However, don’t be too fast when drawing conclusions — this gas station is remarkable for its gas prices. The Vatican’s prices for fuel are lower and many Italians dream about fueling up their vehicles at this station. Unfortunately, it’s impossible because only vehicles with local numbers have the right to fuel up there.

The local postal services are the most popular in the world. 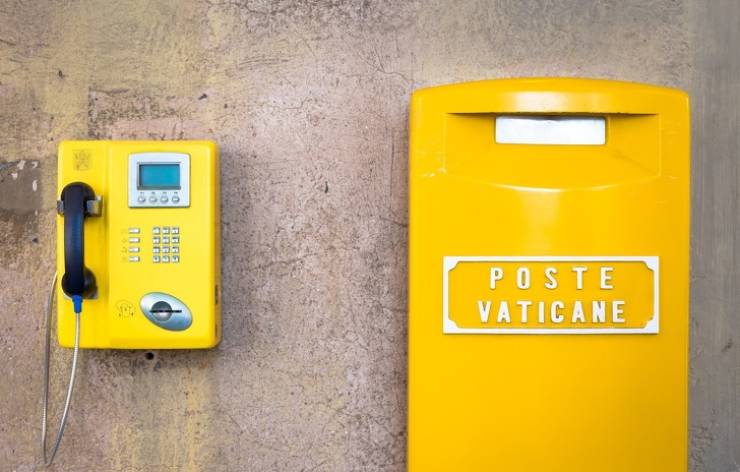 The famous Vatican post has been recognized as one of the best in the world. It works very fast and that’s why some Italians prefer to send their letters from there. The local post ZIP code is the most popular in the world because it has the biggest number of letters sent from it. The post services of the enclave send about 2.5 million letters, 7 million postcards, and about 20,000 packages annually.

The Vatican’s shops are tax-free. 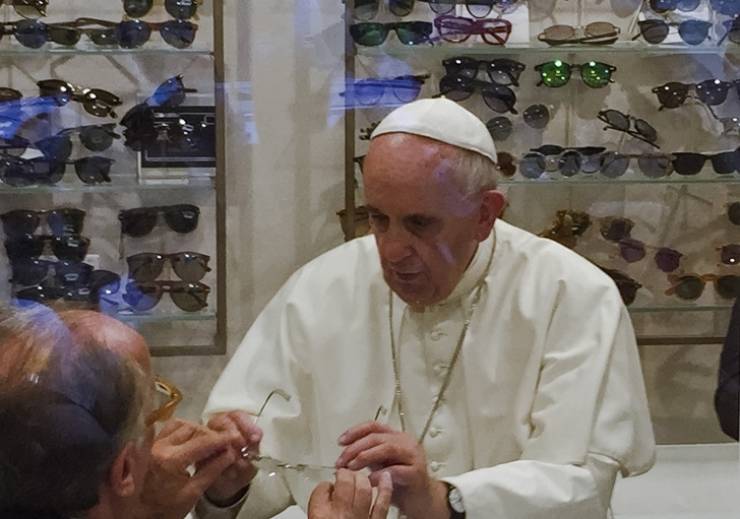 But don’t be in a hurry to start looking for shops when you arrive — unfortunately, it’s impossible for ordinary mortals to even get there. The thing is that the Vatican’s residents have established privileges. The Vatican’s shops are tax-free, that’s why their prices are usually 25% lower. This rule works for products, elite alcohol, brand name clothes, and shoes.

The Vatican’s railway is the shortest in the world. 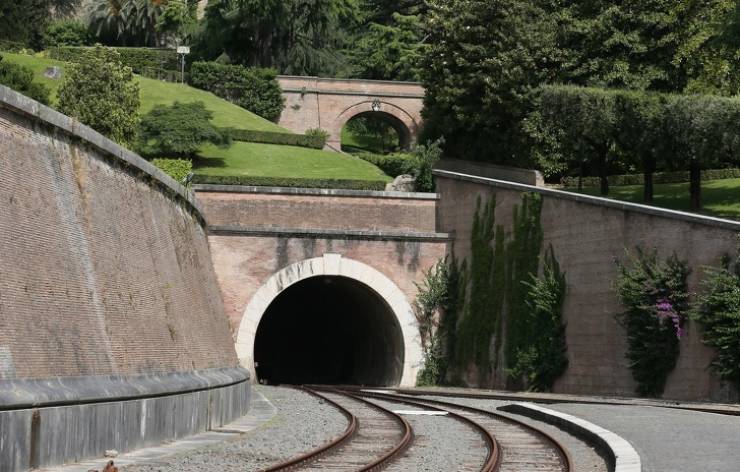 The length of this railway is about 3,000 feet, 1,000 of which go through the territory of Vatican City. Earlier it was used exclusively for the Pope’s trips to Rome, but recently it has been opened to tourists as well.

The Vatican Apostolic Library has over 1 million books. 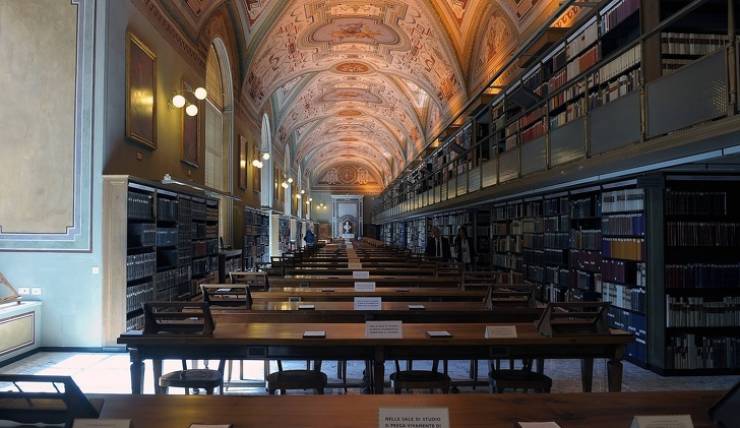 This library was founded in the 15th century by Pope Sixtus IV and it is stilled replenished with new books on a regular basis. Today its collection includes approximately 1.6 million printed books, 150,000 manuscripts, 8,300 incunabula, more than 100,000 engravings and maps, and 300,000 coins and medals. Each year the library is replenished with 6,000 new books.

St. Peter’s Basilica is one of the biggest Christian churches in the world. 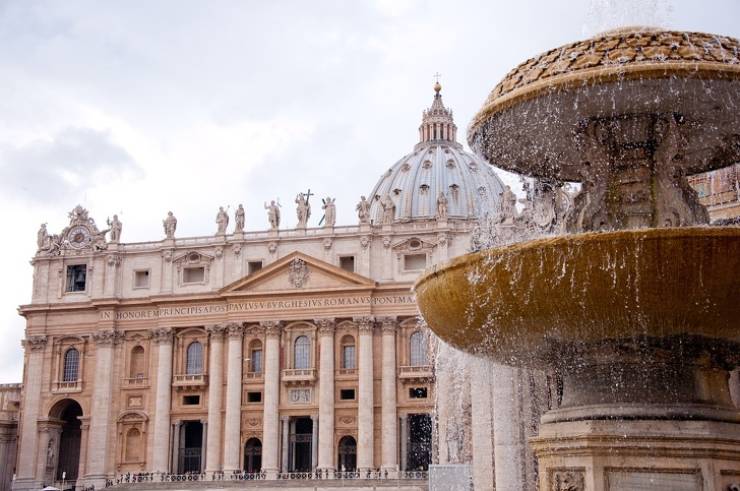 The Roman Catholic Papal Basilica of St. Peter in the Vatican is considered the largest building of the Renaissance. Its construction started in the middle of the 16th century and wasn’t finished until 120 years later. The length of the building is 720 feet, its width is almost 500 feet, the height is 435 feet. The Basilica holds about 15,000 people, while its premises hold 80,000 people. Today it is the second-largest Catholic basilica in the world — it was surpassed by the Basilica of Our Lady of Peace in Côte d’Ivoire in 1989.

Catholics around the world dream about kissing the Pope’s hand. 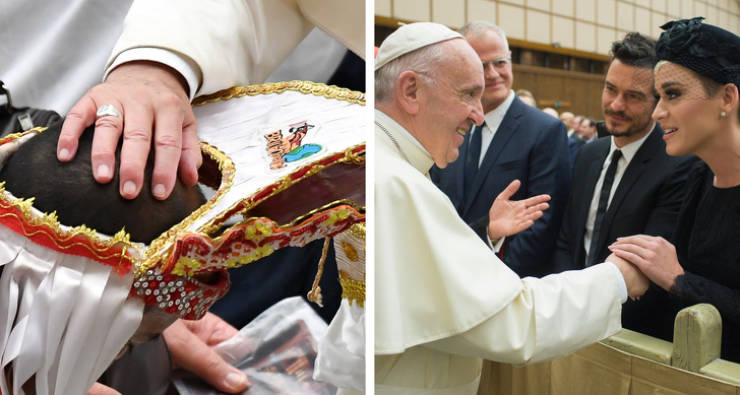 Ever since the Middle Ages, there has been a tradition according to which every visitor to the Pope should kiss his hand as a sign of respect and admiration for him. This is the hand where the pontiff wears the Ring of the Fisherman, as a reminder that he is the heir to the Apostle Peter, who was a fisherman. The ring depicts Peter throwing a fishing net from a boat.

The Pope’s ring is the main symbol of church authority. After the Pope’s death or his abdication, the ring is destroyed in the presence of other cardinals which symbolizes the end of his reign. A new ring is produced for a newly chosen pope, which, as a rule, is made of gold.

Haven 8 month s ago
And the award for the "Biggest Hypocrite Of All Time" goes to... Catholic church!

Give them a round of applause everyone, you made this happen!