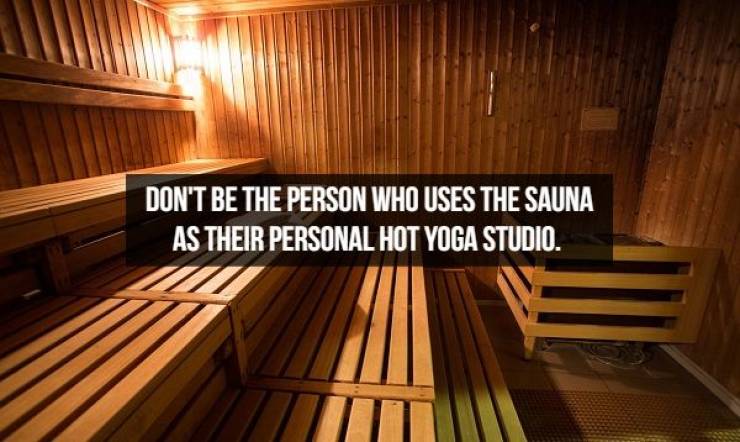 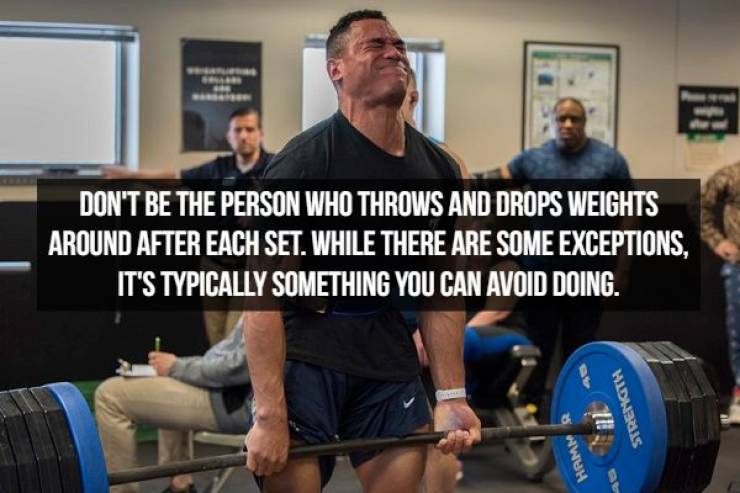 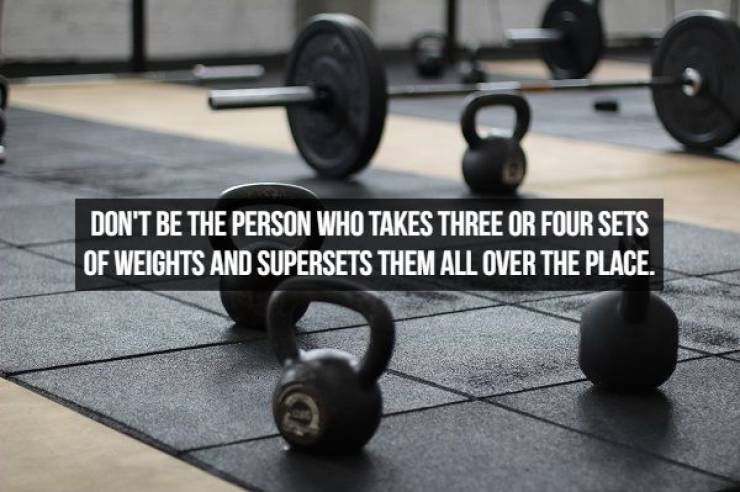 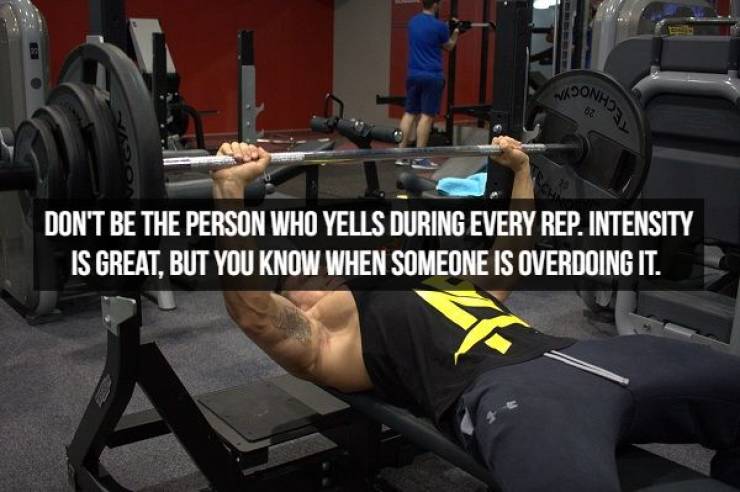 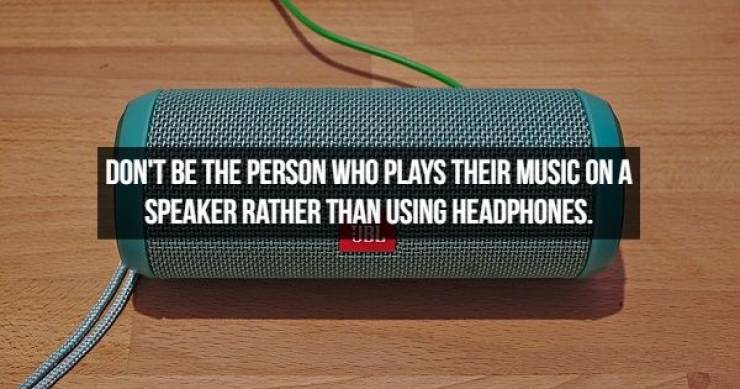 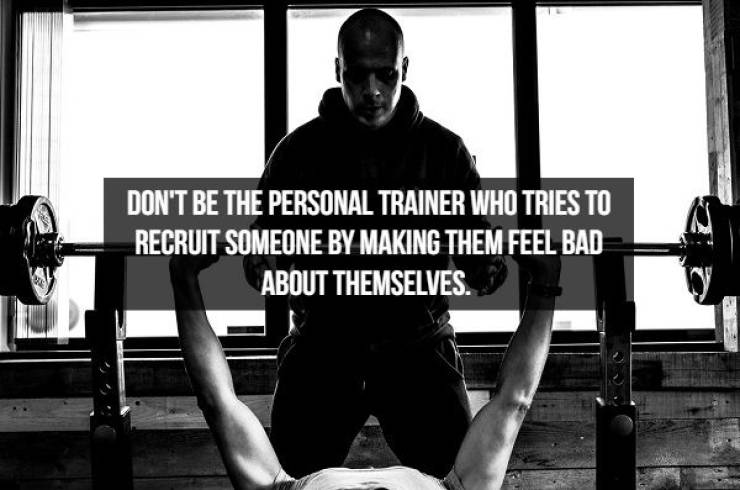 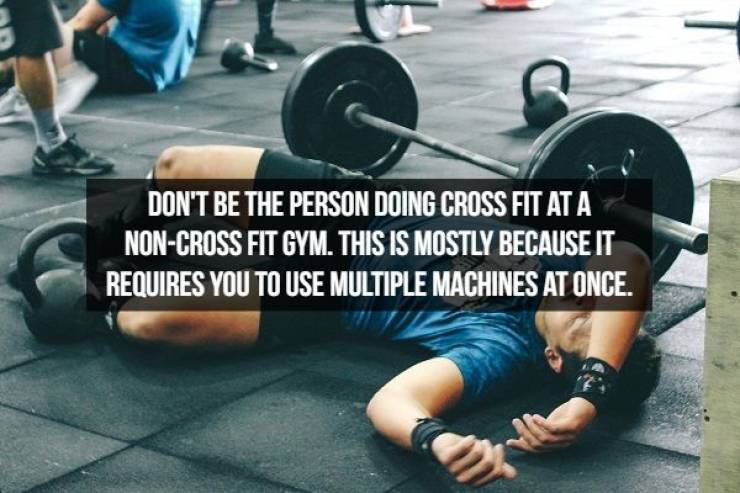 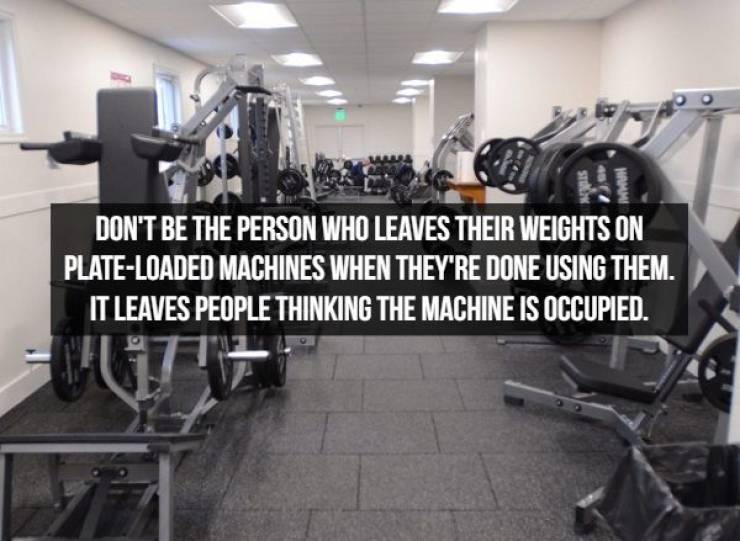 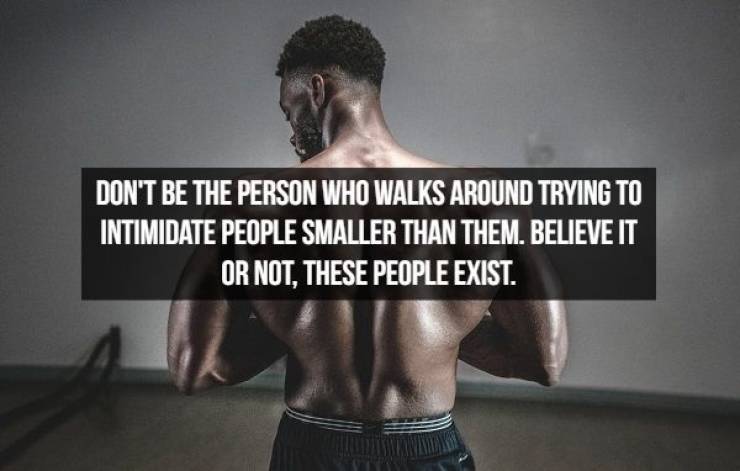 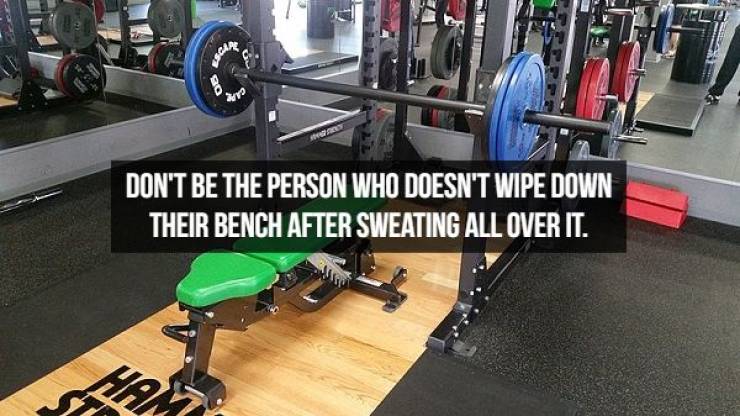 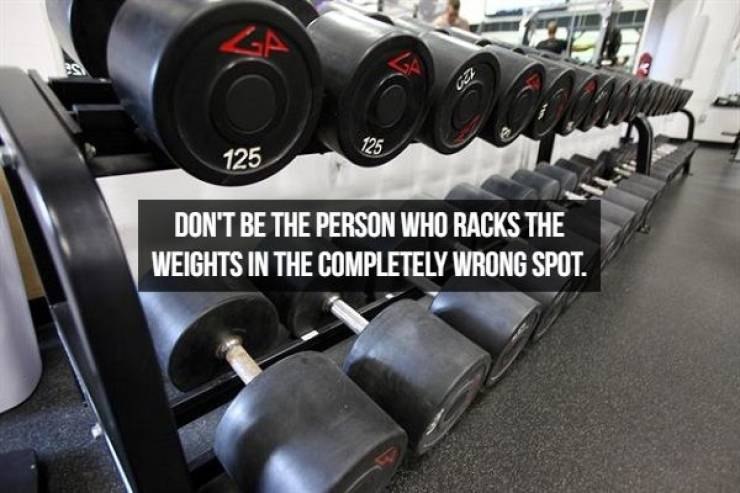 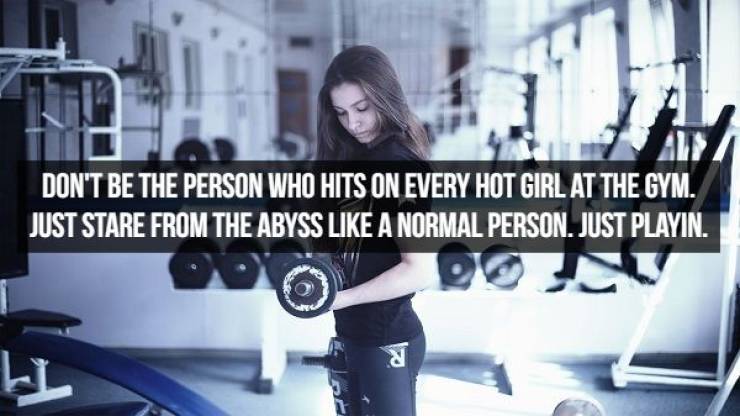 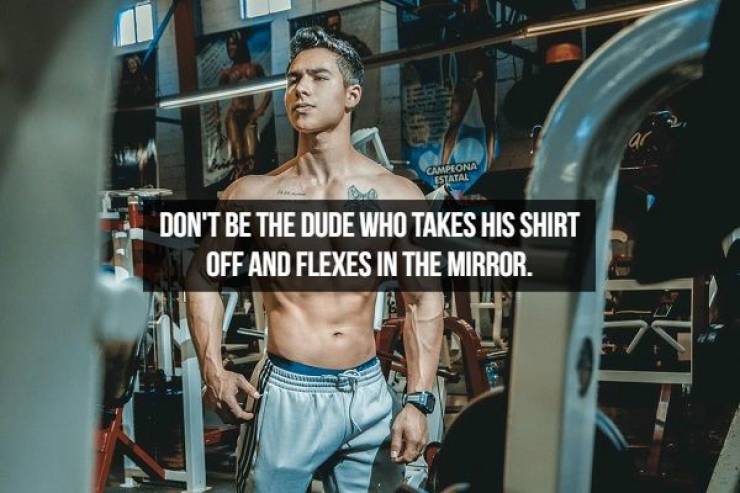 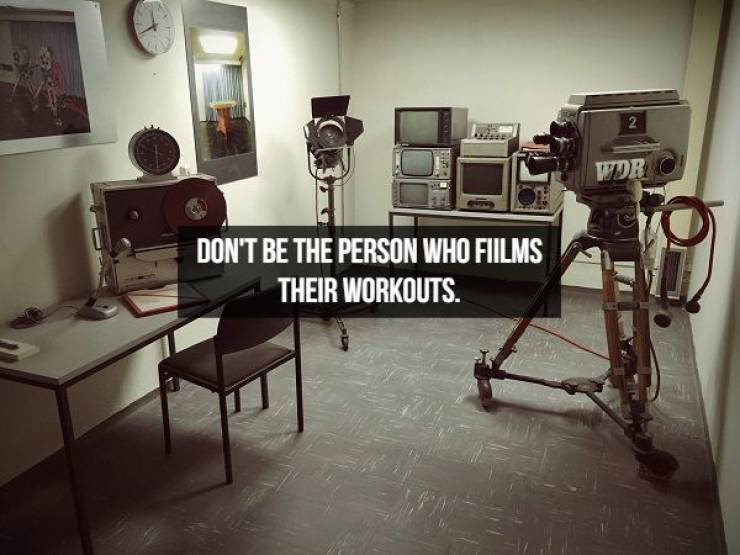 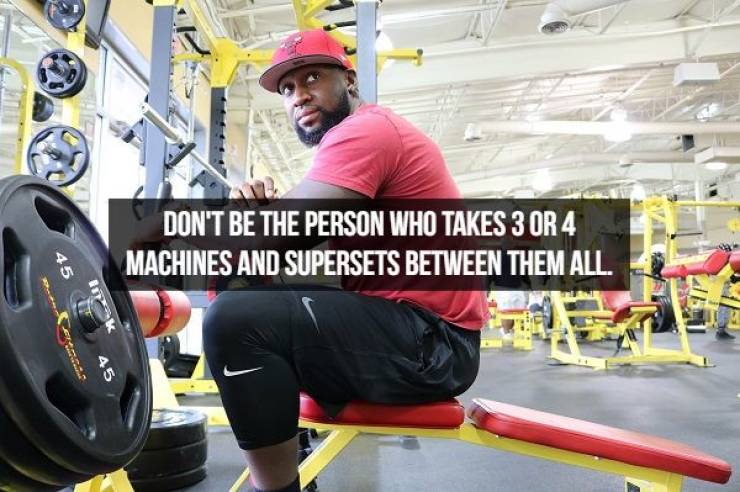 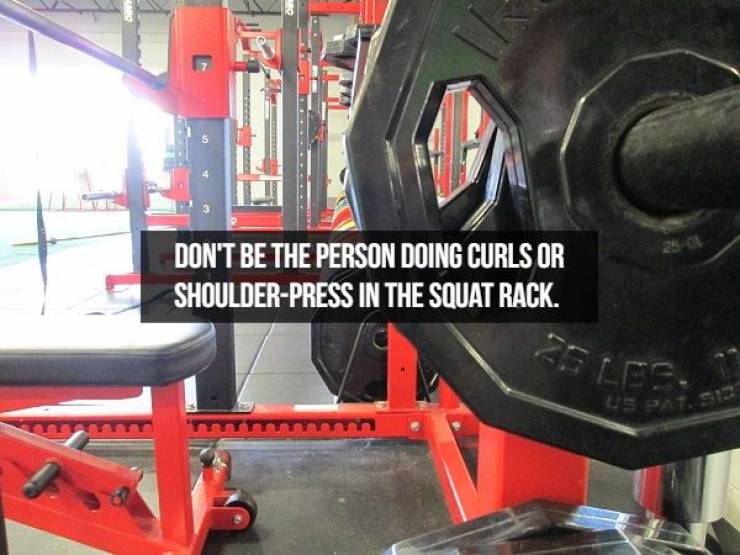 Lastly, don’t be the person who spends too much time being loud and joking around with pals.

Hybrid 8 month s ago
Gyms have become the Macdonald's of exercise. If you have so little imagination that you need to go to a chain corporate gym, you deserve whatever you get. Most people wouldn't know a real gym if they landed in one, so here's a newsflash: power- and olympic-lifters train in specific ways - ways which soccer mom gyms don't understand: you're taught to yell on exertion because it gets your whole body into the lift. Of course there are a few yahoos who just think making noise makes them lift better, but you can tell them by the sound of their voice - if you know what you're listening for. Legitimate lifters are also taught to drop weights at certain points in the training of certain lifts, and of course, when they compete. But soccer moms and posers don't know that, so they bitch about it. Again, some people do it out of ignorance; but you can tell the difference between someone doing multiple sets of cleans, and some poser dropping their dumbbells after a set of biceps curls. ...Gyms nowadays are set up so you aren't going to get a maximum workout. From the equipment to the rules to the decors, which are designed to get you bored and make you want to leave. Also, the reason gyms are so cheap is that they know people will ignore the $10 or $20 dollar auto-withdrawal, and keep allowing their bank accounts to be drained despite never going.
Reply
1

Member 8 month s ago
dont be a meany personal trainer Lol... ever tried anything in your life? it's not like they are military trainers.
Reply
-1

Bookmark 8 month s ago
#11 drives me nuts. I think the people that put them back in the wrong space must be mildly retarded.
Reply
-1

Christmas 8 month s ago
#16 Sure, don't do curls. I disagree with not using it for shoulder press. Having safeties under the bar is actually a good idea.

#16 Sure, don't do curls. I disagree with not using it for shoulder press. Having safeties under the bar is actually a good idea.
Reply