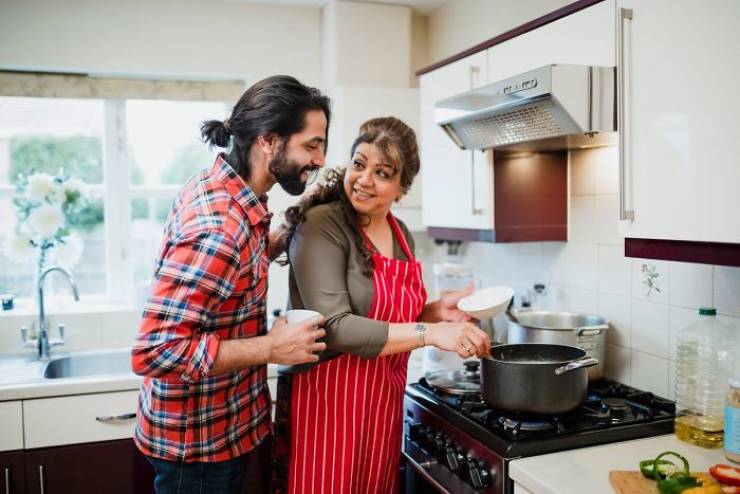 Among the European countries where most ‘youngsters’ stay with their moms and dads the longest are Montenegro, Croatia, Slovakia, and Italy

According to Eurostat’s 2018 data, the average age across the European Union when young people leave their parents’ homes is more than 25 years old. In 2017, Eurostat showed that 35.3 percent of 25 to 34-year-old men were still living at home, compared to 21.7 percent of women of the same age group. The smallest percentage of young people living with their parents was found in Denmark (3.2 percent), Finland (4.7 percent), and Sweden (6 percent). While the highest was in Croatia (59.7 percent), Slovakia (57 percent), and Greece (56.3 percent).

Meanwhile, Statista’s 2018 data shows that the average age when ‘youngsters’ from Montenegro left their family homes was 32.8. Croatians are in second place with an average age of 31.8; Slovakians are third with 30.9; Italians come right after that with 30.1.

“Another key reason is family caregiving needs,” Breen explained why young people live with their parents for longer. “Young people in Canada, Australia, the US, Britain (and in other parts of the world) are actively engaged in providing daily care for family members (including siblings, parents, grandparents, and other family members).”

“Family members are struggling to fill the gaps in healthcare and social welfare systems that do not provide adequate care and support for people with chronic illness, disabilities, mental health struggles, and substance abuse disorders. This is particularly important as populations age. Much of the care for grandparents is now provided by grandchildren, whose contributions to family life may be financial and may also involve caregiving and other forms of household labor.”

“And a third reason is culture. Individualistic notions of people growing up and “going out on their own” are not the norm in many cultures, which emphasize that elders should be looked after by family members and that family well-being is a collective responsibility. This is challenging individualistic notions that the ultimate aim of adult life is to be independent and able to “go it alone”. Immigration trends and movements to recognize and value Indigenous cultures (in Canada, the US, and Australia) are also pieces of this puzzle.”

Europeans end up living in their family homes longer, just like decades ago 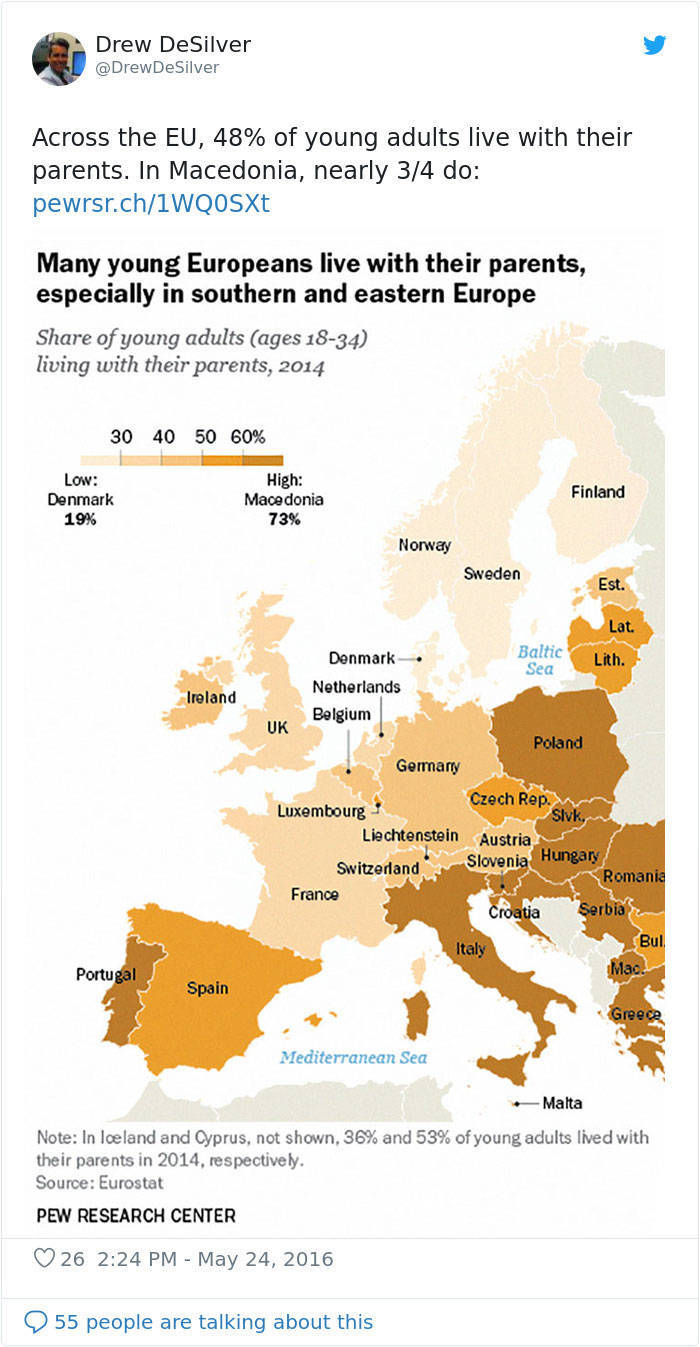 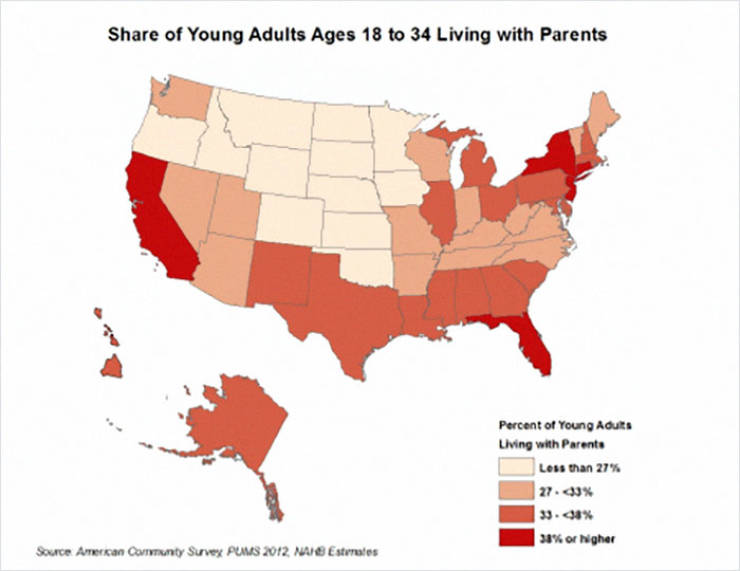 Breen went on to analyze whether living at one’s parents’ home has positive or negative effects: “It really depends on the family.”

“Recently I did some interviews with CBC Canada after news that an upstate NY couple won a lawsuit to kick their 30-year-old son out of the house. Obviously, that seems like an extreme example of family conflict related to an (adult) child living with his parents too long. While the headline is an attention-grabber, the reality is that we do not know what that family may have been struggling with behind the scenes (e.g. mental health issues? addiction?).”

“It is important to highlight that the trend of extended families living together is in part a symptom of the terrible financial struggles that many families face. Many people have no choice but to live with their parents (or their adult children) in order to make ends meet. On the other hand, for some families, these changes might also create opportunities for stronger connections to family and culture and benefits to mental health and well-being.”

Nobody’s judging the people still living with their parents, but by the age that they do move out, those individuals are less like baby birds and more like the gigantic harpy eagles that live in rainforests.

The situation is similar in the United States 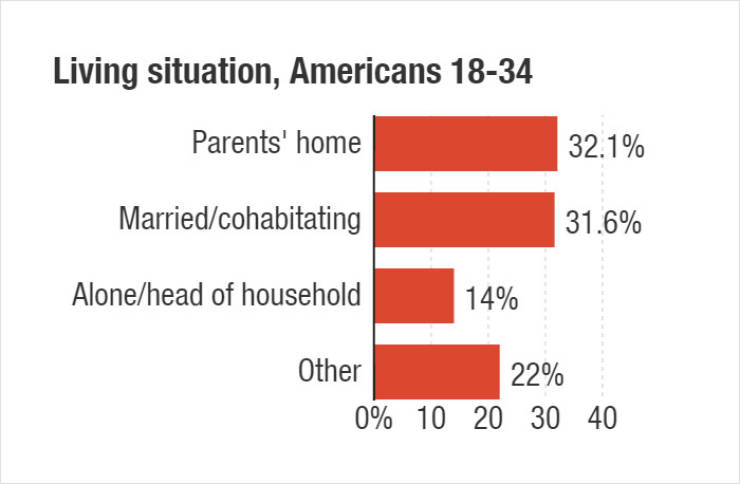 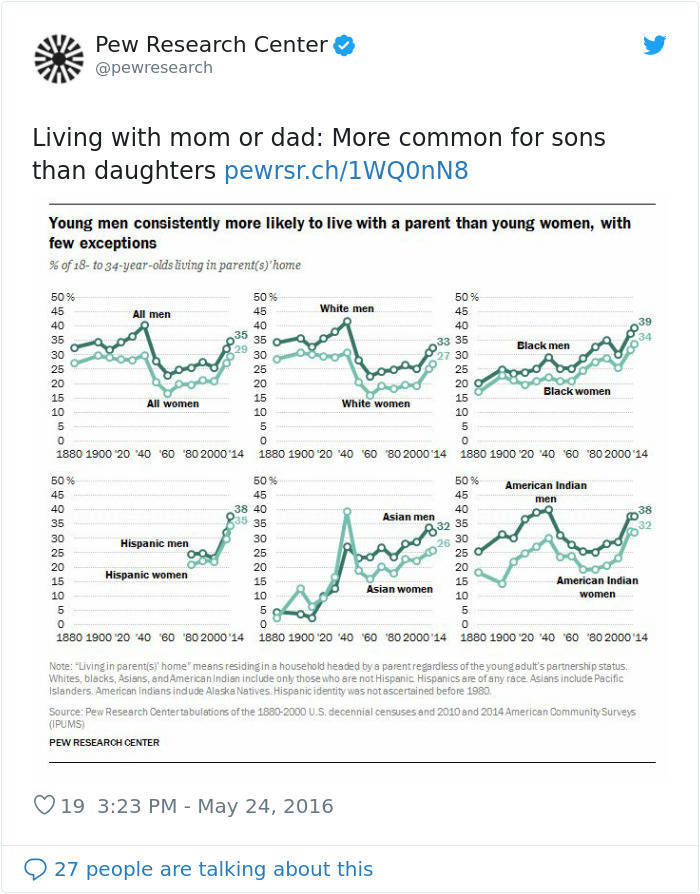 The same is true ‘across the pond,’ in the United States. For example, NBC reports that according to the data that Census collected 1 in 4 Californians between 25 and 33 years of age are still living with their mother and father. Things are no different in Australia, where 43 percent of 20 to 24-year olds haven’t moved out yet, compared to 36 percent back in 1981.

There are serious reasons for this phenomenon, and it’s not just the ‘youngsters’ who have to shoulder the blame. The fact is, financial stability and property affordability both have a lot to do with the decision whether to stay with mom and dad or to fly out of the nest.

The reasons for staying with your parents can be financial, but there are others as well 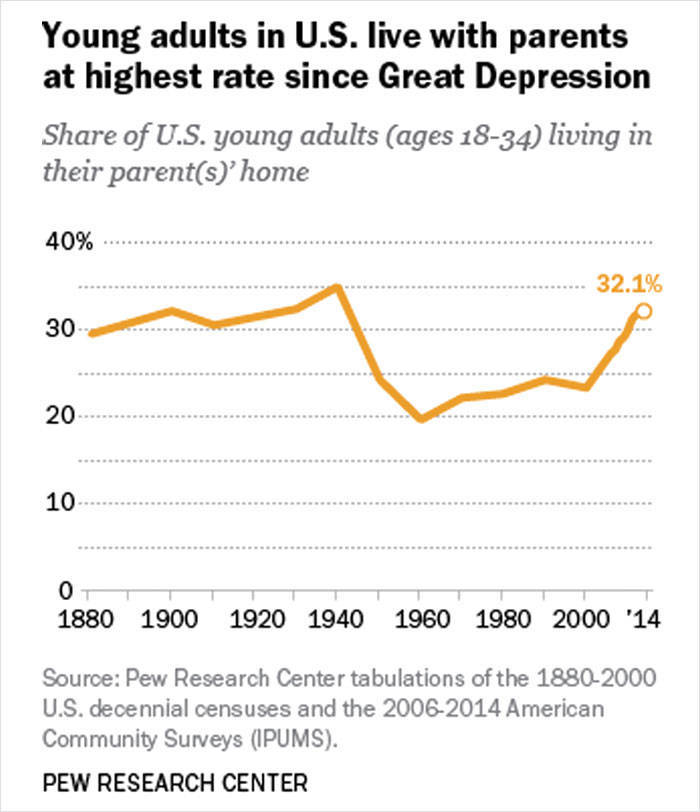 According to The Economist, Brits have it bad: house prices have doubled over the last two decades, and a 27-year-old today is thus half as likely to become a home-owner than 15 years ago. The fact of the matter is, buying a house was far cheaper a generation ago. And even cheaper the further back you go.

Curbed writes that in the United States, in 1959, a teacher would make 5,200 dollars a year, while an average house in California cost 12,788  dollars. That’s an income of 44,493 dollars and a house price of 109,419 dollars when adjusted for today’s dollars. Nowadays, teachers living in San Francisco earn a median salary of 72,340 dollars, but buying a home in the city costs 1.61 million dollars.

There are other reasons why young people are moving out later in life, such as getting into serious relationships later and later in life, which means they’re likely to move out later as well. Focusing on careers and being able to postpone starting a family may have something to do with that. However, another possible explanation could be a change in values, resulting in young people caring more about their families than before.

Life 7 month s ago
Yeah, gender equality my hairy b*lls. 18 yo girls will ALWAYS have a place to live should they choose to, if you know what I'm saying. 18yo boys are broke as a joke and statistically will remain so until their mid 30s. Another mystery solved.
Reply
-2