These Movies Were Not Supposed To Go Big… (12 pics) 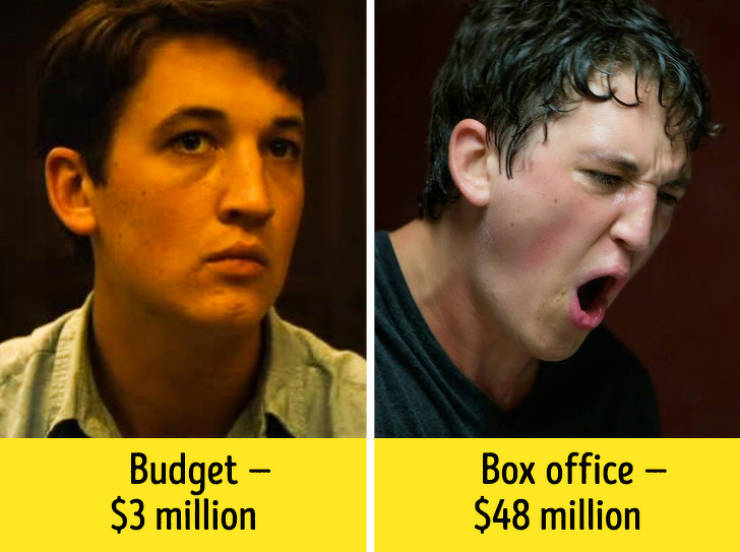 This dramatic film about a determined drummer won 3 Oscars and 1 Golden Globe Award. In the beginning, nobody really believed in Damien Chazelle’s idea. But later, he shot the famous La La Land: a musical thriller that seemed to have zero future. Producers thought that viewers wouldn’t be interested in trying to understand the intricacies of a relationship between a 19-year-old drummer and the head of a jazz band.

But Chazelle decided to make a short film with one of the scenes from his future movie and it was the right decision: he won an award at the Sundance Film Festival! After that, his long-time attempts to turn Whiplash into a full-length film finally worked out. The film turned out to be a real hit and it was even on the list of 10 best films of 2014. The film ended up being way more intense than it was expected to be (after all, it’s about how new talent arises). But the story didn’t feel too sweet which often happens in films like this one. The characters were amazingly charismatic and realistic. 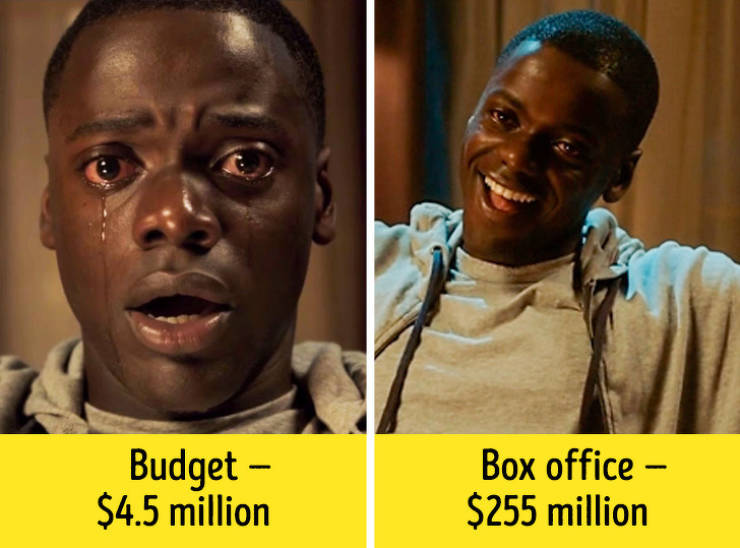 This low-budget satire detective film from an amateur director managed to get a lot of awards, including an Oscar for “Best Script” as well as nominations for “Best Actor” and “Best Director.” Initially, nobody believed in the idea since the story was a mix of different genres: a dark comedy melded with both a thriller and a horror theme. It also touched on inequality issues which is usually categorized as a social drama.

It’s hard to characterize such a film and it wasn’t entirely clear what the target audience would be. For example, action film fans would think that this movie was too long since there was only 1 twist during the entire runtime and it occurred right before the ending. But viewers and the critics not only embraced the mix of genres but they also thought it was a real masterpiece in the thriller category. 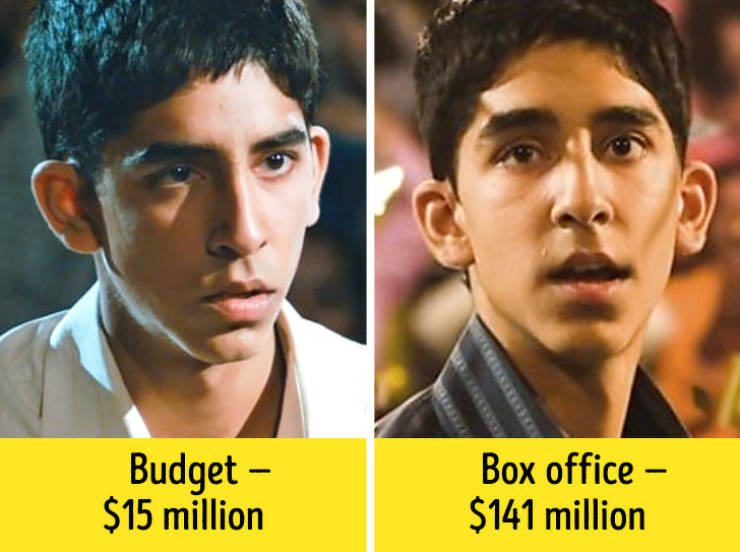 This crime drama is based on a bestselling book written by an Indian writer and diplomat named Vikas Swarup. The book tells the story about a young guy without an education that was lucky enough to take part in a TV quiz where he could win money.

The original idea was quite out there. The director, Danny Boyle, who you might remember from Trainspotting and The Beach, decided to mix Hollywood with Bollywood. It turned out to be a classic tale about a poor but honest man who achieves a lot — it was sort of a Cinderella story. But the film about dreams coming true earned its creators a lot of awards. They won several Oscars, Golden Globes, and an award from the Screen Actors Guild. The creators managed to combine both the drama from the Indian slums and fairy-tale-like wonder that made viewers hopeful about the future. 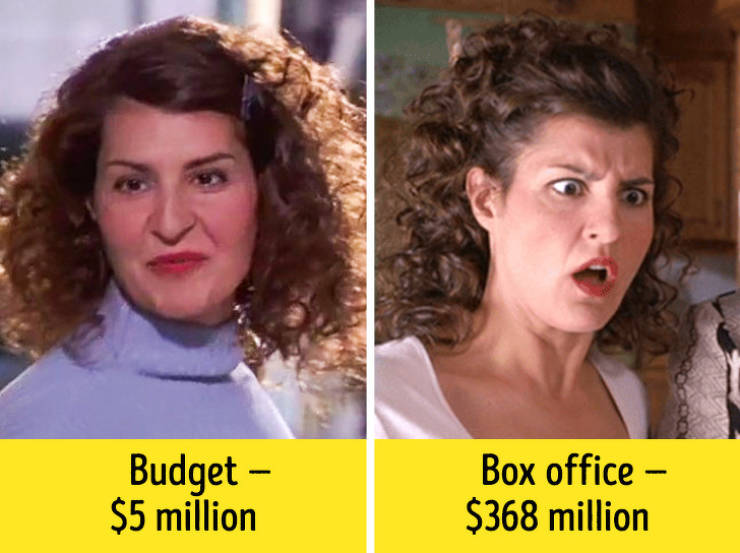 The creators of this film managed to shoot a simple, romantic comedy that turned out to be interesting not only to its target audience but to people who weren’t even Greek. The story itself isn’t very original: all the events revolve around a young Greek girl that falls in love with an American man which comes as a bit of a shock to her big family. So, her new boyfriend is then expected to adapt to the new culture.

The characters in the film are quite cartoonish and the huge wedding at the end wasn’t very detailed. However, all the clichés were compensated with great humor that both viewers and critics loved. Also, no matter where you’re from, a huge wedding with all the accompanying drama is something that everyone has seen at least once in their lives which is what made the movie extremely relatable. This is the secret of the so-called “movie magic” which made the creators of My Big Fat Greek Wedding rich even though the initial budget was pretty small and the plot didn’t have any huge twists. 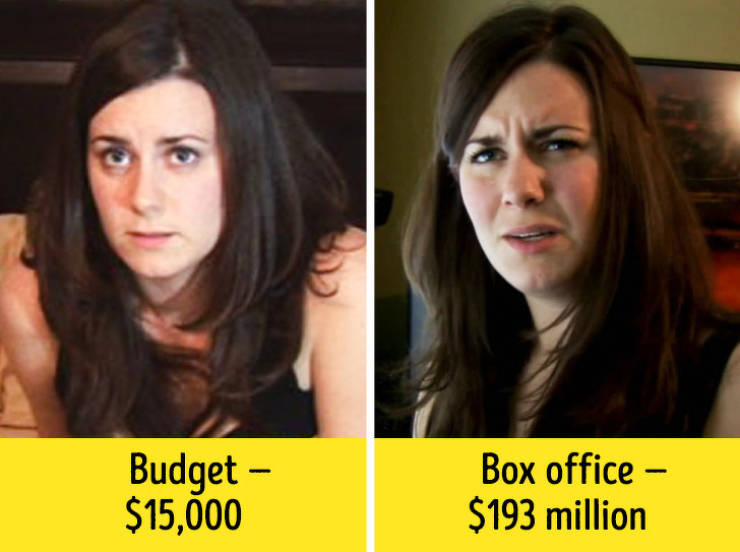 This low-budget horror film was shot in a pseudo-documentary style. Its creators didn’t really hope for huge success, after all, the genre isn’t something a lot of people like. The production was very simple: all the shooting took place in the director’s house and only lasted for 1 week.

But it was the pseudo-documentary style that made Paranormal Activity so thrilling. The seemingly simple horror film earned a ton of money and a lot of respect. As this review says, “Paranormal Activity is one of the scariest movies of all time. YOU WILL BE AFFECTED as it’s hard to ignore the imprint it leaves on your psyche. You know it’s fake, and yet, you can’t shake it. Nightmares are guaranteed.” 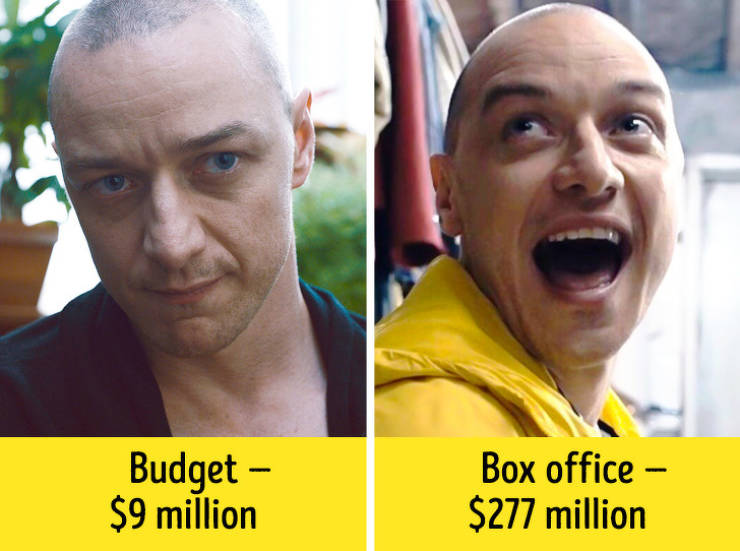 This complicated psychological thriller that had nothing to do with the word “blockbuster” was received incredibly well, worldwide. And it was because true professionals worked on the film. M. Night Shyamalan, who you might know from Stuart Little, The Sixth Sense, and After Earth, directed the film starring actor James McAvoy who already had experience playing a character with a multiple personality disorder from his movie, Filth.

The story is about a character named Billy Milligan and it’s very interesting. The director of the film managed to not only to tell a unique story about a person that had already been covered by many documentaries, but he also was able to reconstruct an intriguing story from a disease. It’s really hard to believe that this hit had such a small budget, isn’t it? 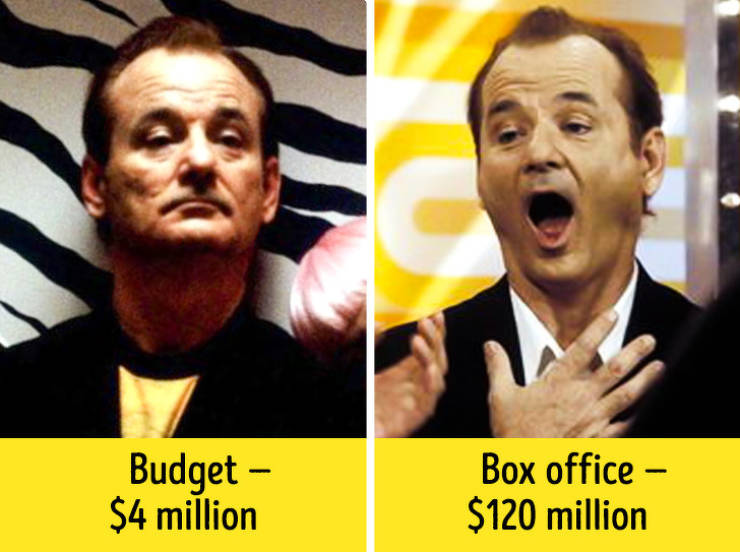 The story of how 2 lonely people met, portrayed by Bill Murray and Scarlett Johansson, absolutely bombed in festivals around the world. In fact, it’s really hard to define the genre of Lost in Translation: it doesn’t have enough funny scenes for a comedy, it’s too realistic for a romantic flick, and it’s not really a drama. However, there’s a whole lot of emotion and moving dialogue.

Despite this, critics said that director Sophia Coppola managed to create a controversial but harmonious movie that had enough room for both humor and serious topics. The reason for its success was that it was able to depict life as it is: the characters don’t look perfect and they don’t try to show love that doesn’t exist. You can see these kinds of people in the street every day and such relationships happen all the time. 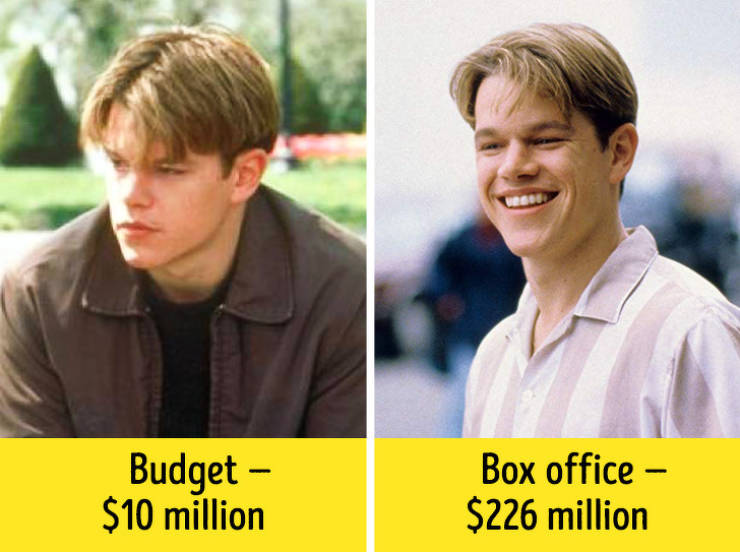 This drama about a talented mathematician was included in IMDb’s top 250 best films and won 9 Oscars. In general, classic Hollywood films always portrayed the “smart guy” as either a crazy genius or a mafia gang member, and because Matt Damon’s character was neither, nobody had really high hopes for the film. But the plot, which implies that being gifted doesn’t mean your problems magically disappear (but often only makes your life harder), was very interesting to movie fans. People rushed to theatres to learn more about the genius, everyday man who rarely left his therapist’s office. 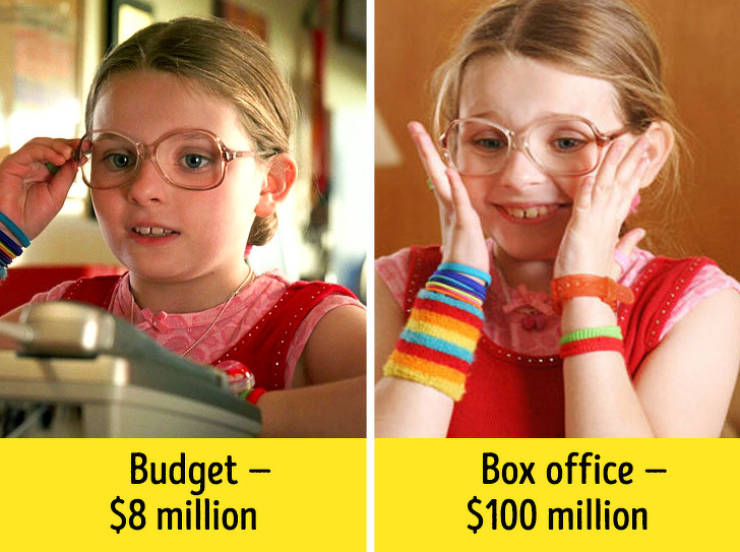 This wasn’t a very promising film because the plot wasn’t very original or new. It’s about an entire family coming together in order to make a girl’s dream come true. The characters and the events were all movie clichés: an angry teenage boy, a person that teaches everyone to be successful in their lives, a road trip, problems with the police, etc. In other words, these scenes were in plenty of other movies.

However, everyone that took part in creating this film was critically acclaimed: the film got awards for best script, best actor, and best soundtrack. The main actress even got a special award in her age category of actors under 10 years old. In general, the film was successful because of 2 factors: the great acting performed by Abigail Breslin and the comical portrayal of a beauty contest. 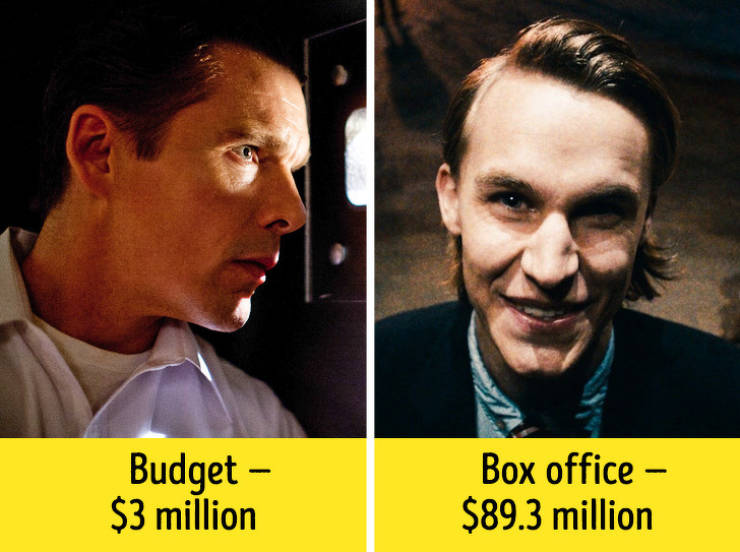 Even though modern viewers aren’t very fond of anti-utopia films, this sci-fi flick starring Ethan Hawke interested movie fans around the world. The director that was inspired by the works of Stanley Kubrick, David Fincher, and the Star Trek franchise managed to tell a gripping story about the terrible consequences of the economic crisis in the US. 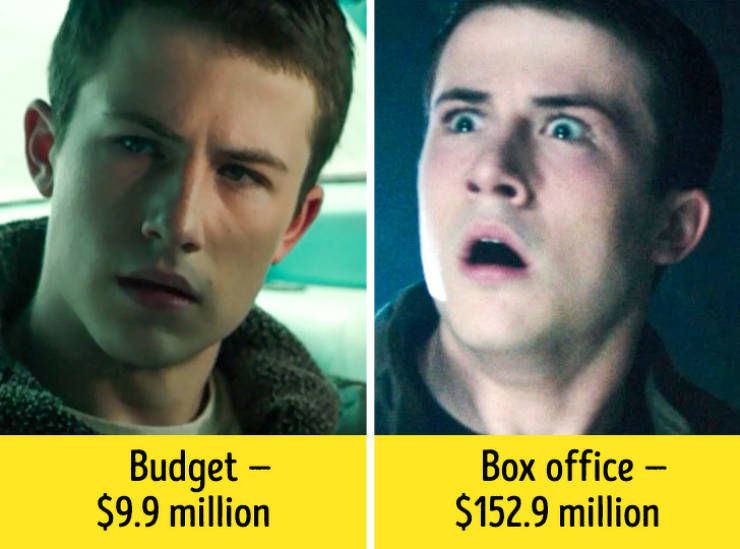 This low-budget thriller turned out to be an unexpected hit and won 3 awards. The director of the film was Federico Alvarez who actually made a reboot of the iconic horror film, The Evil Dead several years ago. The plot of Don’t Breathe violates the laws of the genre: it doesn’t invoke any empathy toward the characters that are in the tight space. Why would we be empathetic toward them if they stole money from a lonely Iraq war veteran?

The film is also full of very ordinary movie elements such as a hero-like nerd, a scared girl, and a mysteriously terrifying house. But all the drawbacks are compensated by the great acting chops of Stephen Lang that could save just about any film. In addition, the events in the film were pretty dynamic. 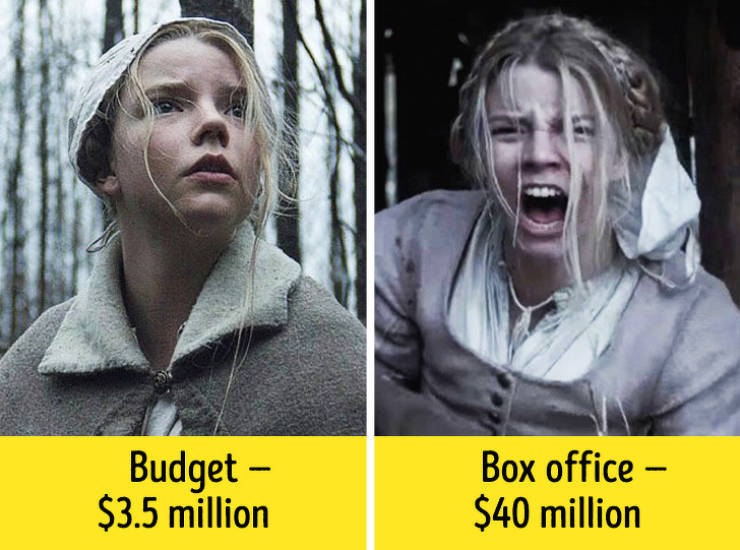 A movie about mysterious events that took place in the US during the 17th century doesn’t seem that exciting. And this low-budget film was the first movie director Robert Eggers ever made. But the Sundance Film Festival really helped with the film’s publicity. The director managed to find an independent film distributor and then he found a bigger worldwide distribution company.

It seems that very low-budget horror films are becoming a global trend these days. It’s worth noting, the creative team was very meticulous about the film. In order to appear more realistic, they used only natural light like candles, for example, and in order to create the costumes, they only used materials that really existed at that time. The tight budget forced the team to learn about the smallest details from this time period since they had to reduce costs as much as possible.

Gorgeous 7 month s ago
Shouldn't "Deep Throat" be somewhere in there as well?
Reply