How Spices Look In Their Natural State (15 pics) 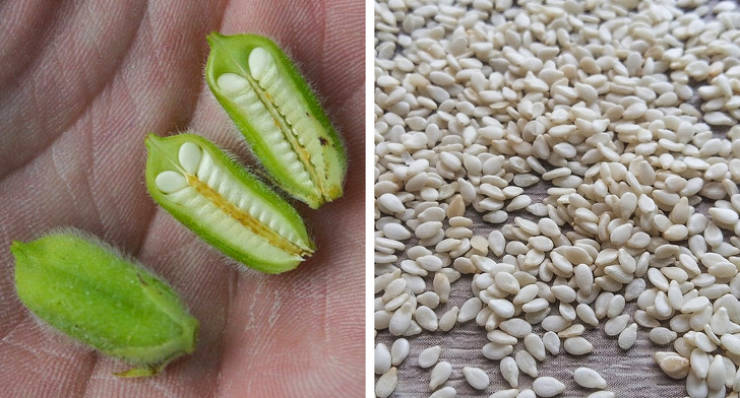 Those tiny fragrant black or white seeds that we often find on pastries or in various dishes, actually grow in pods. The plant, that has lilac or white flowers, can grow up to 9 feet in length. One pod, which is usually very small — about 3 to 5 cm in size, can have up to a hundred seeds. Sesame grows in hot, dry climates, since they are very drought-tolerant plants. The name of this spice in Greek means “thread” or “fiber.” The most valuable part of it are its red stamens. The pestle of the bud needs to be collected quickly, since the flower dies fast, that`s why saffron is known as an exquisite and very expensive spice. 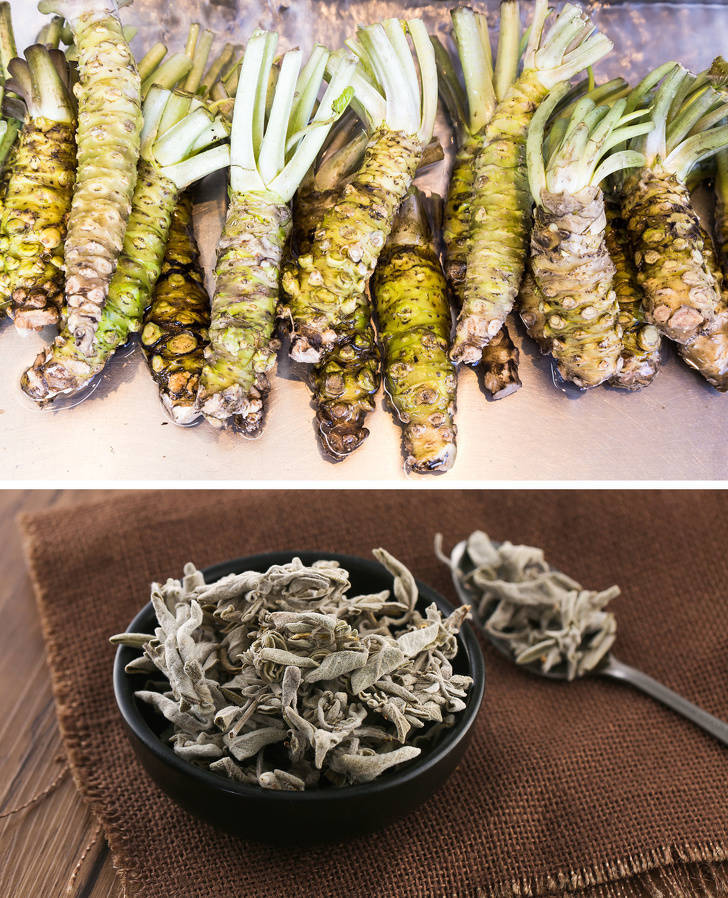 Not all sushi lovers realize that wasabi is a root and that it’s even sometimes called Japanese horseradish. The plant itself has heart-shaped leaves and small white flowers, and the root is grated into pastes and powders. Wasabi likes to grow in dark, wet places, but can also be grown in a garden. 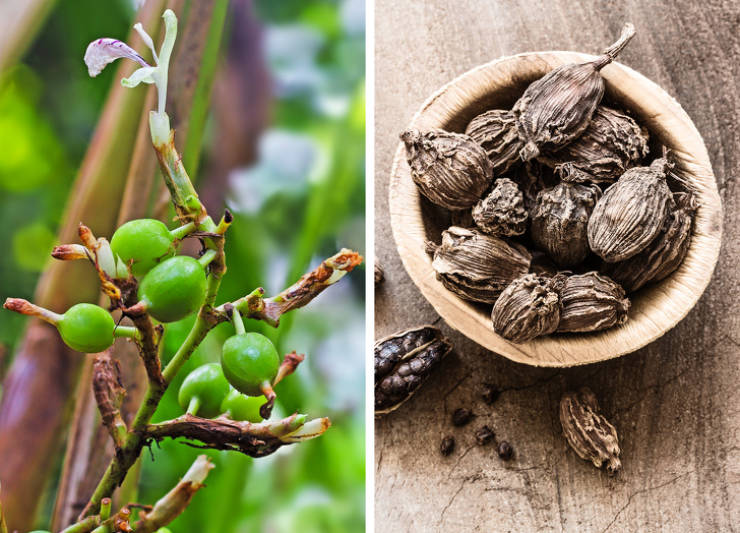 Cardamom is one of the most expensive spices on the market, which is why it`s sometimes called the “Queen of Spices.” The unripe fruits of the plant have a very strong aroma. They need to be collected, dried in the sun, then moistened and re-dried. This results in white trihedral capsules with a length of 1-1.5 cm. 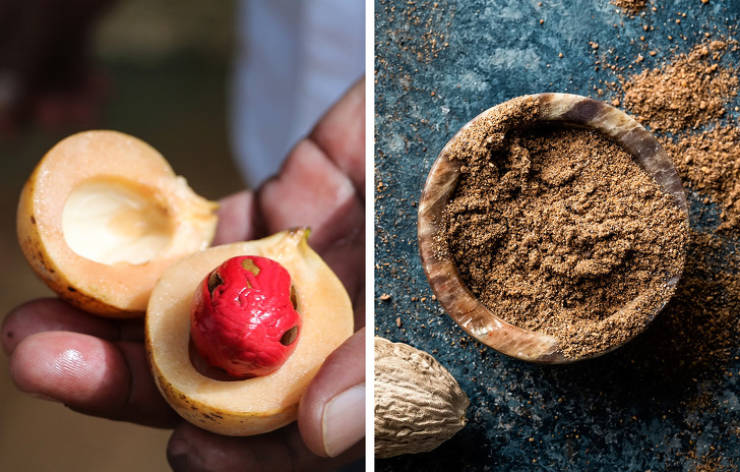 The nutmeg tree itself is really tall, standing around 10-12 m (32-39 ft). The most important part of it are its large fruits that look like peaches. Once fully ripe, they burst in half, so the bone gets exposed — the bones are then collected, dried, and pulverized. 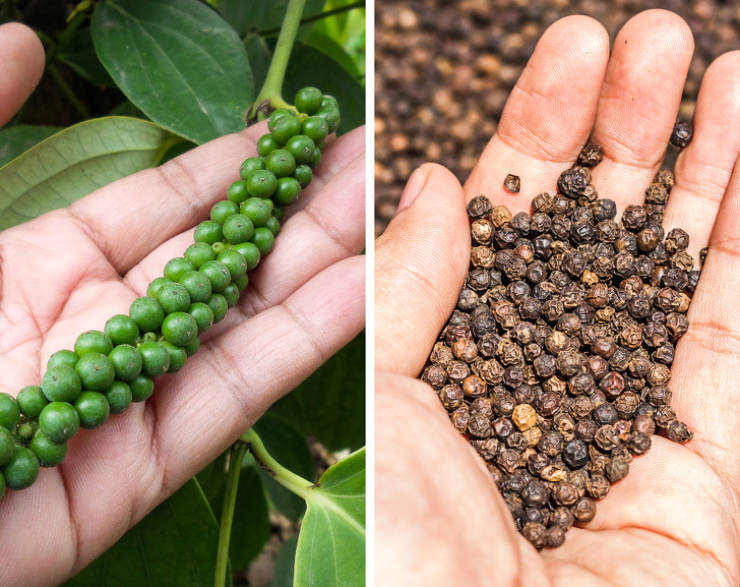 Peppers grow on lianas (woody, climbing plants that grow on trees) in high humidity and stable heat, like in Asia, and its length can reach 15 m (49 ft). Peppers bloom simply, with small white flowers collected in a long spikelet-like shape. The round green fruits are exactly what black pepper looks like when it grows. 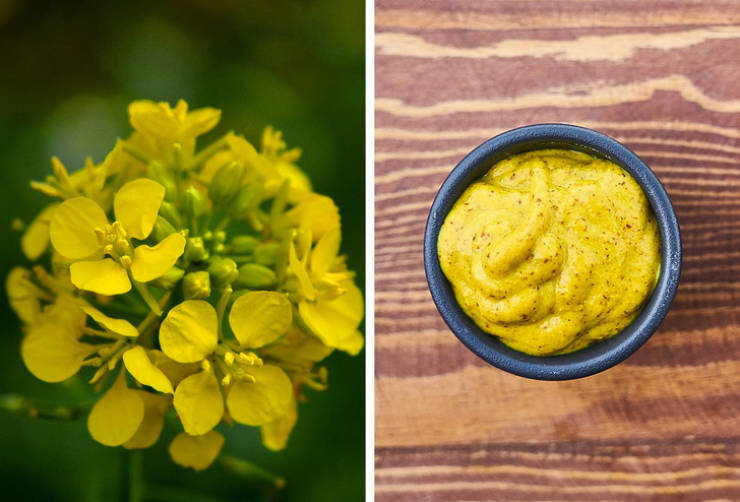 If you’ve ever wondered why mustard has a yellow color, it’s because of these beautiful flowers. The plant grows in fields, and the yellow flowers start blooming in late September—early October. Then their seeds are harvested and dried. They are mostly used in cooking and medicine. 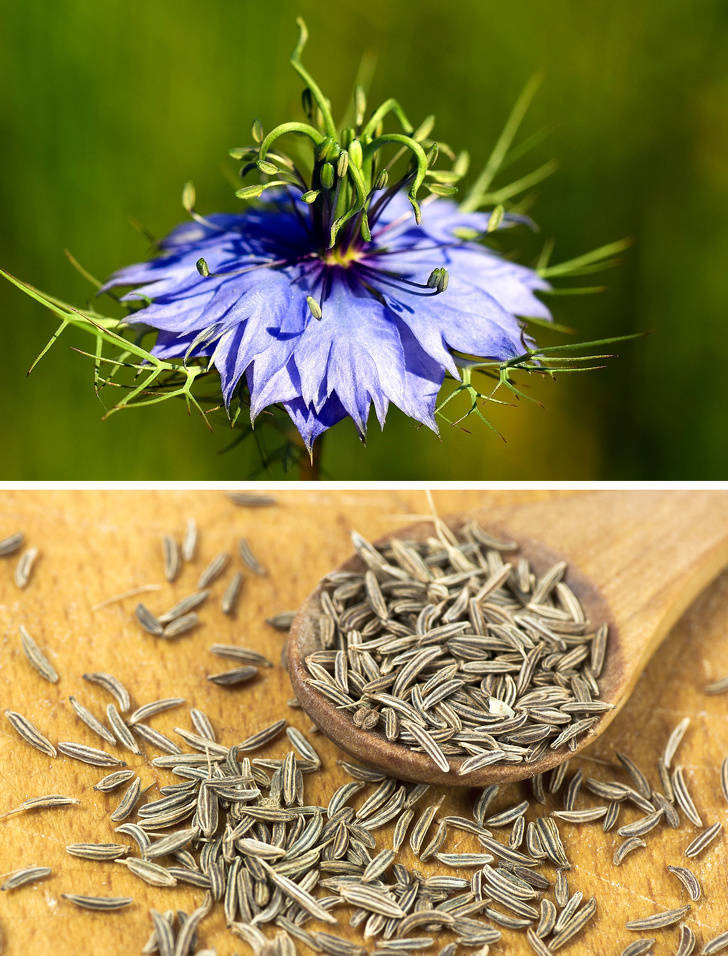 Сumin is a frost-resistant, light-and moisture-loving, flowering plant that is very similar to parsley. The seeds are collected before they are ripe and left to ripen in a dark, dry place. By the way, as a seasoning, you can not only use the seeds, but you can also use the young leaves. They contain minerals, vitamins A and C, and the same essential oil as the seeds. 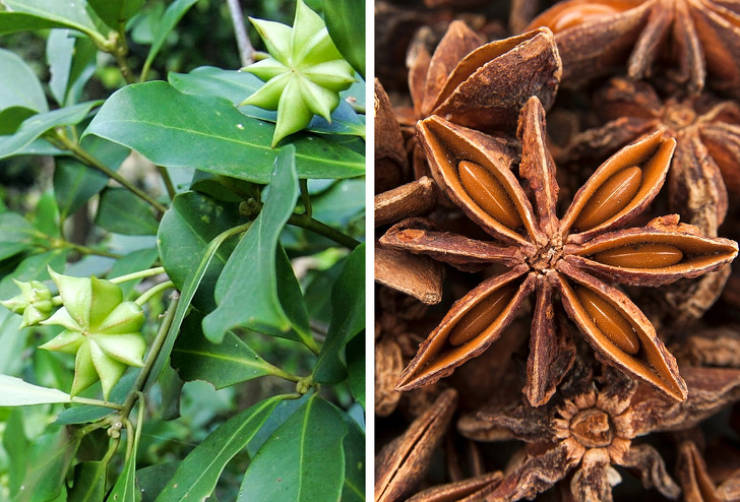 These evergreen shrubs are known for their little stars — the brown rays that hide these fragrant seeds. At the same time, all parts of the shrub, including the roots, have the same pleasant smell. The fruit itself is a number of small pods collected in a bigger star-shaped pod. After the fruit ripens, the capsules burst, and the seeds become visible. 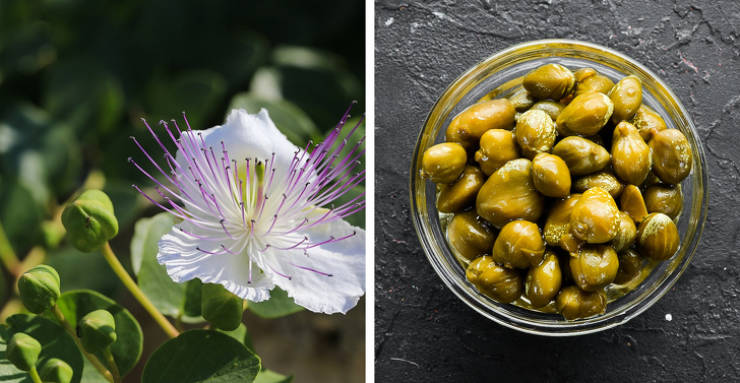 Capers are just flower buds that grow on small bushes with long stems. And during the flowering period, the plant opens up showing beautiful pink or white flowers. Capers are never eaten raw, they are usually pickled or canned in vinegar and salt. 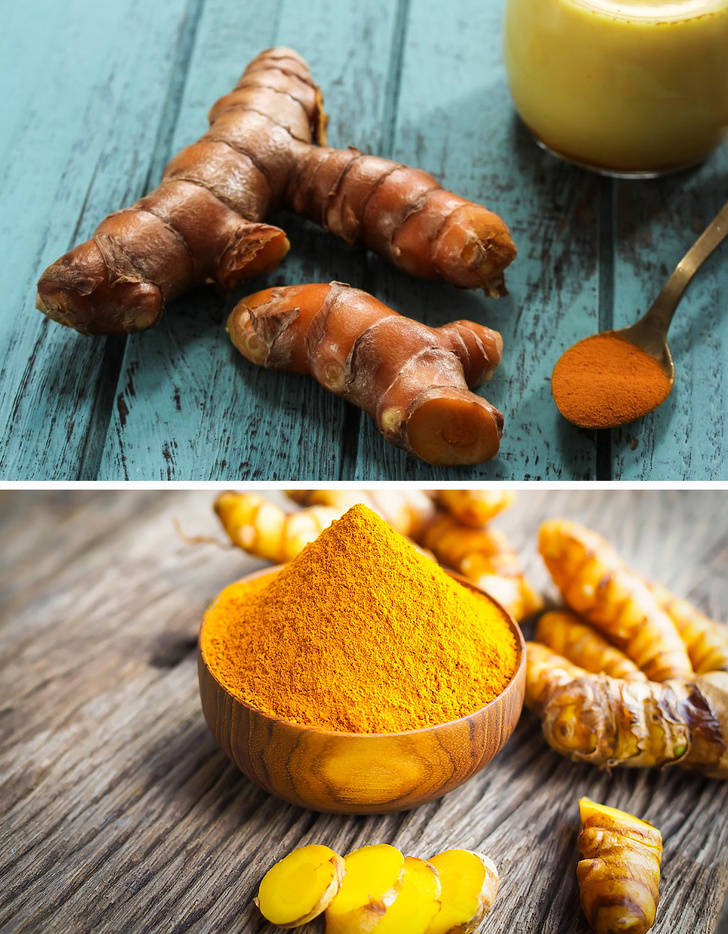 Turmeric is not only a world famous spice, but also a beautiful flowering plant. The main world supplier of turmeric is India. In addition, this spice is actually a root. The root is cleaned from the ground and dipped in boiling water for a minute. This activates the root cells, which begin to secrete an orange stain. After that, the root is dried and ground into a powder. 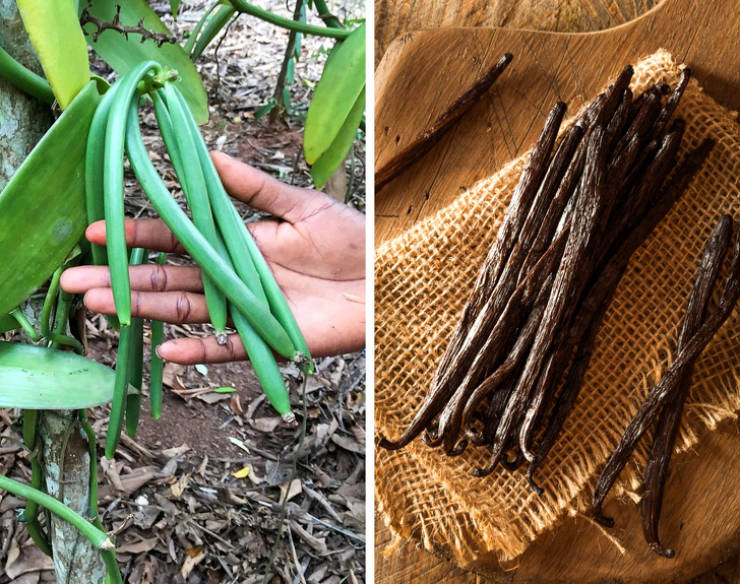 Vanilla grows on perennial vines and actually comes from Central America. From ancient times the indigenous people of Mexico — the Totonaki and the Aztecs — collected vanilla pods and added them to drinks from the chocolate tree, which we now call cocoa. Now vanilla is usually dried and powdered. 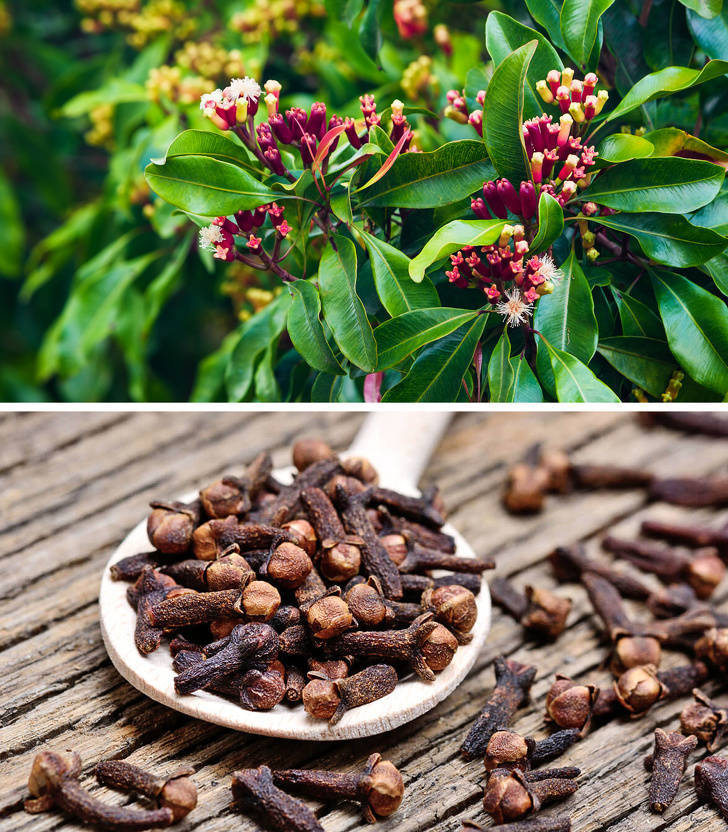 Cloves are dried aromatic flower buds from a tropical clove tree and only the unopened buds are used to make the spice. The tree blooms twice a year, but yields abundant crops, so the price of this spice is low. 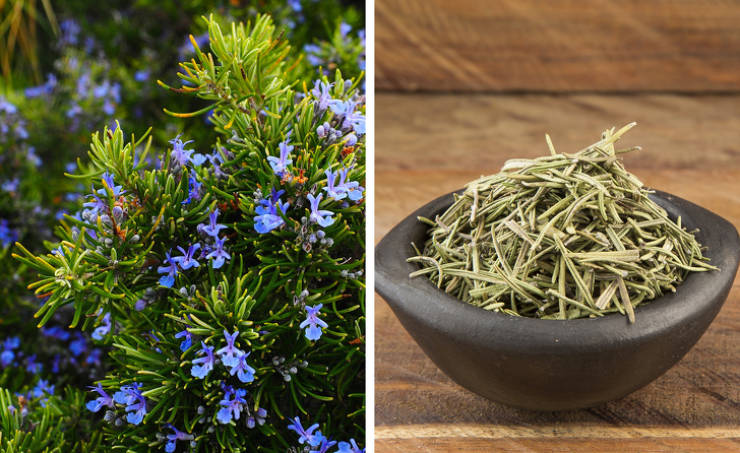 Rosemary is native to the Mediterranean region and translates as “dew of the sea.” It grows on an evergreen woody, perennial bush with needle-like leaves, similar to conifer needles. The seasoning is made of the young buds from a bush — which have to be dried and ground. 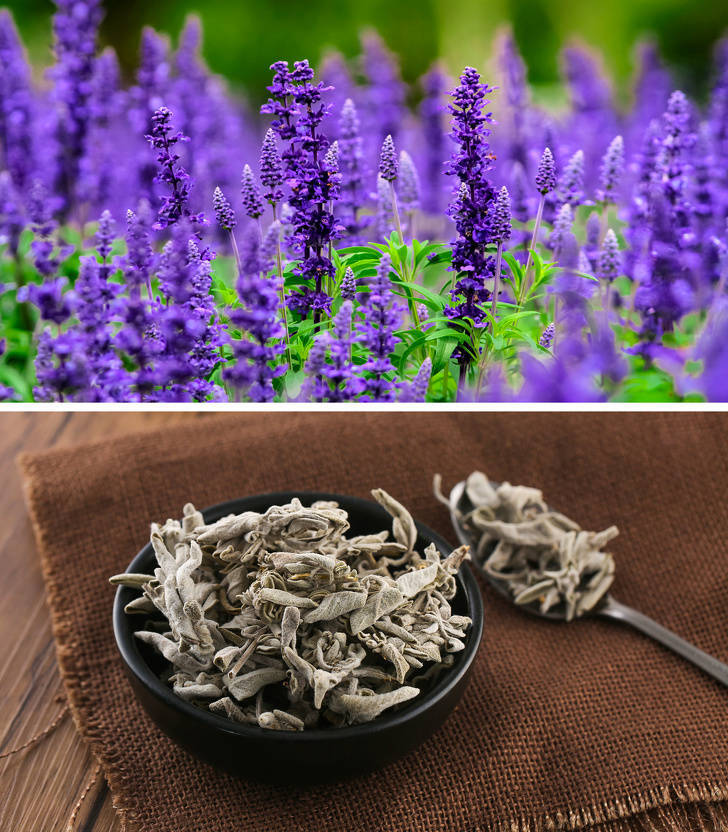 Sage grows in open places, hillsides, and the banks of streams and rivers on shrubs that are 30-40 centimeters tall. It has pretty violet-blue flowers, but it`s the leaves that we use as a spice. Dried sage is actively used not only in cooking, but also in medicine.

ChrisR 6 month s ago
Why is the sage also placed under Wasabi (or vice versa)?
Reply