The latest rendition of “Charlie’s Angels” bombed at the box office - after being granted a $50 million budget from Sony, the film only brought in only $8.6 million at the US box office and suffered some pretty harsh ratings across the board. Elizabeth Banks says it’s men’s fault, so… yeah. 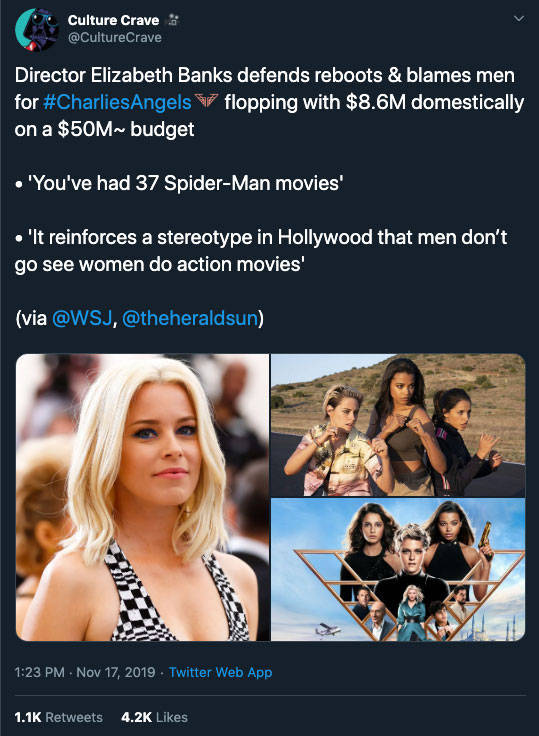 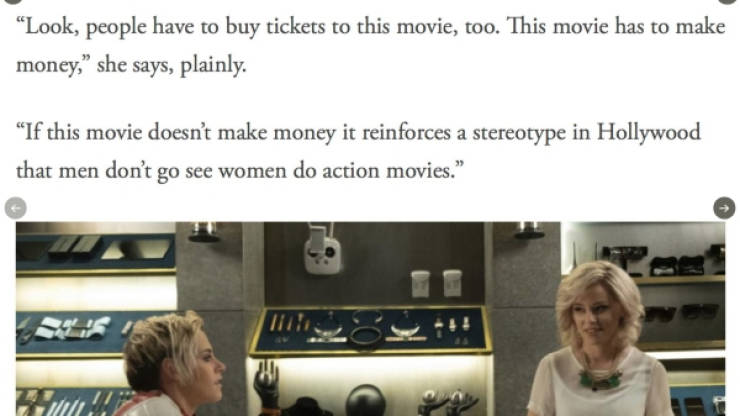 In fact, a week before the movie had even opened, Banks released a statement to Sun magazine citing sexism and that men would be to blame if/when the movie underperformed.

“Look, people have to buy tickets to this movie, too. This movie has to make money. If this movie doesn’t make money it reinforces a stereotype in Hollywood that men don’t go see women do action movies.”

You know you were literally in The Hunger Games, right Elizabeth? 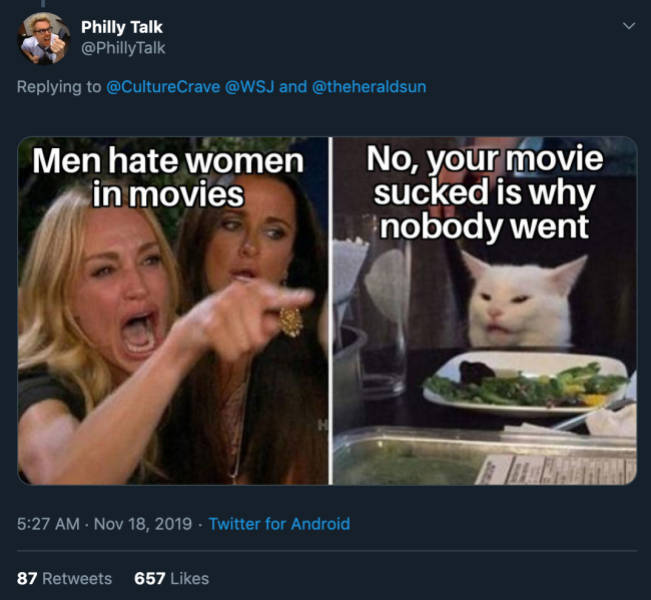 She then doubled-down on her statement by referencing that the success of films starring women, such as Wonder Woman and Captian Marvel, was due to the fact that those films are “comic book” movies.

“They’ll go and see a comic book movie with Wonder Woman and Captain Marvel because that’s a male genre. So even though those are movies about women, they put them in the context of feeding the larger comic book world, so it’s all about, yes, you’re watching a Wonder Woman movie but we’re setting up three other characters or we’re setting up ‘Justice League.’” 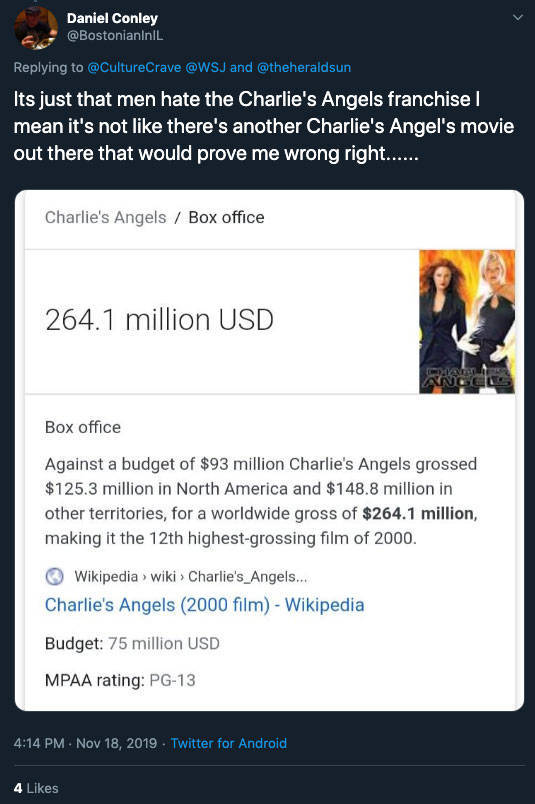 The internet, confused by the tactic of blaming men and not the fact that the movie might just be awful, had some harsh words for Banks. Check them out below. 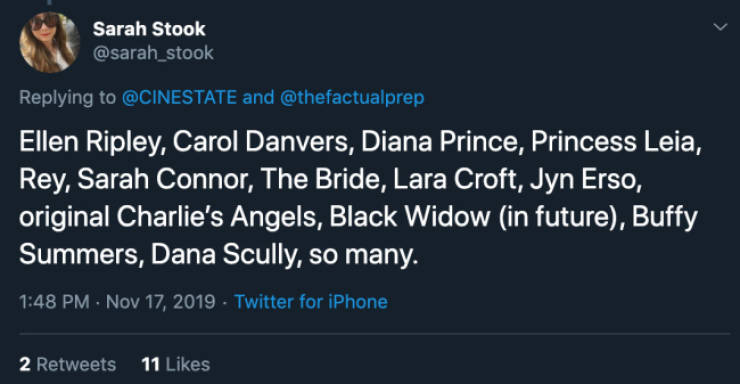 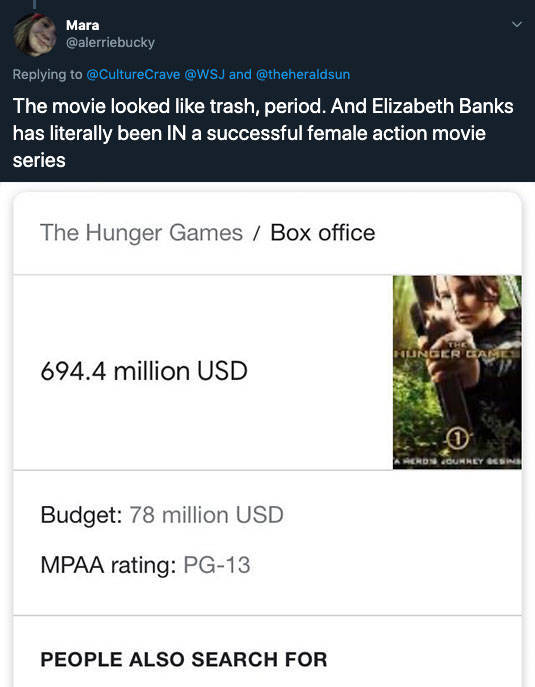 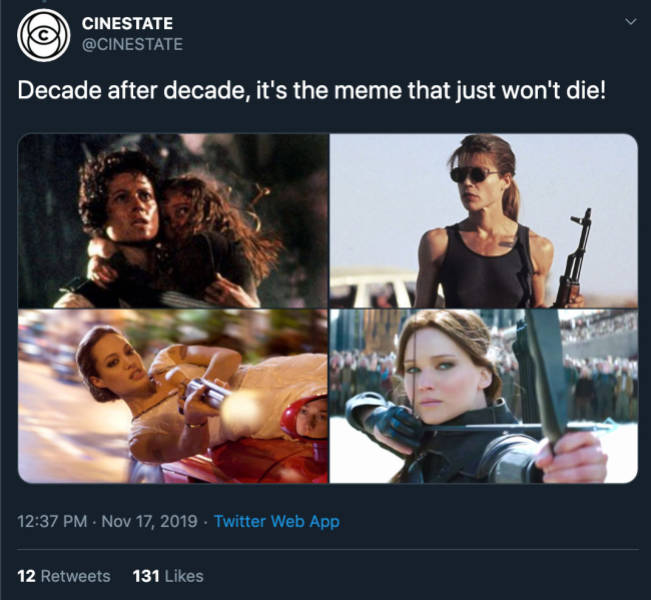 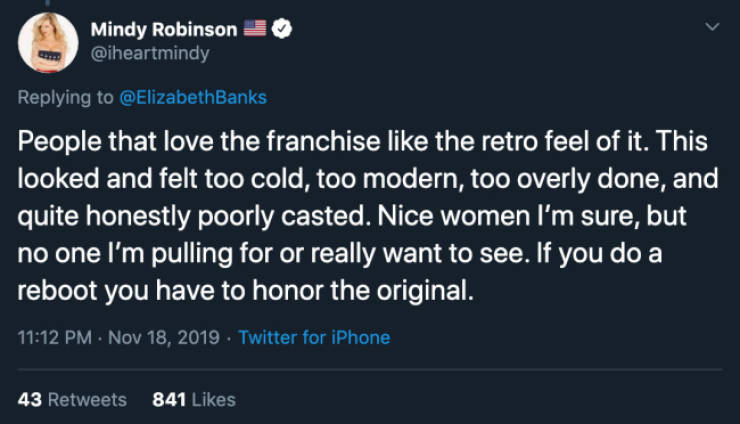 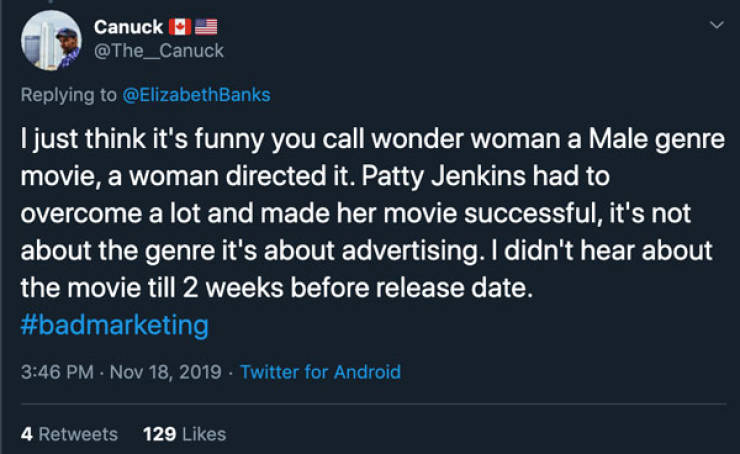 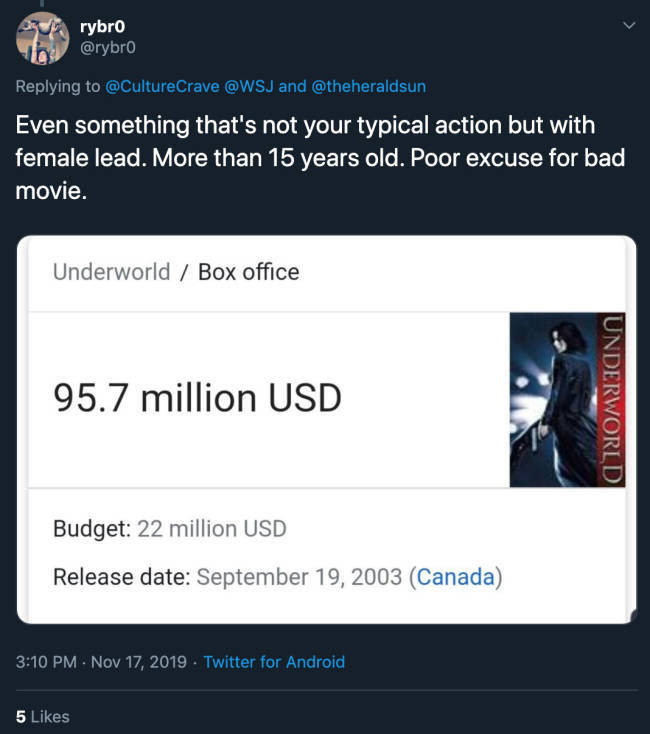 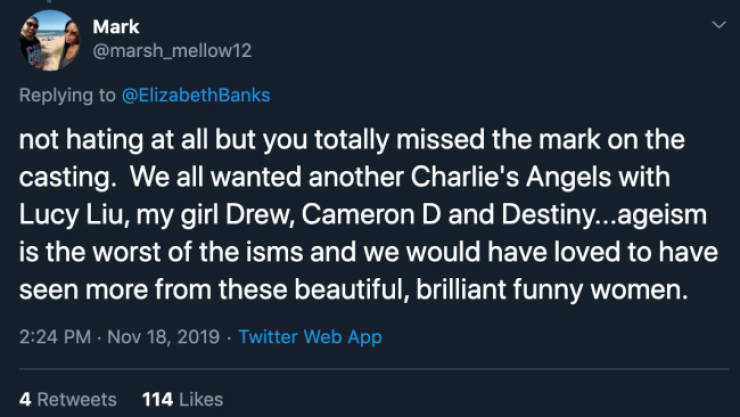 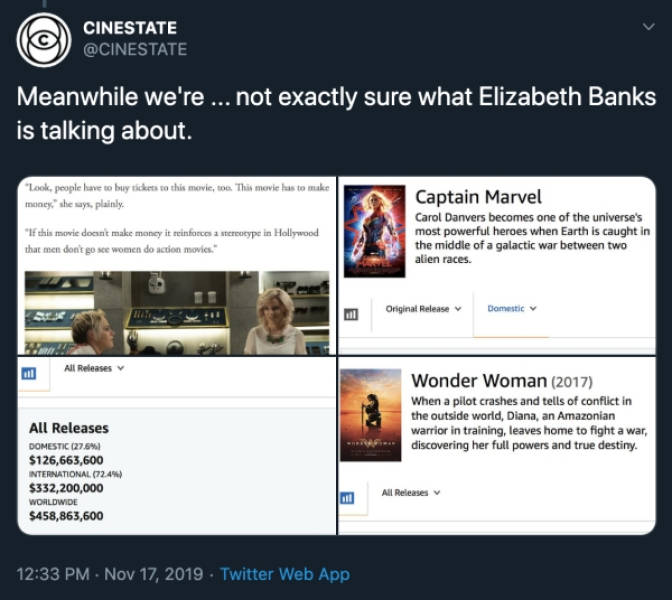 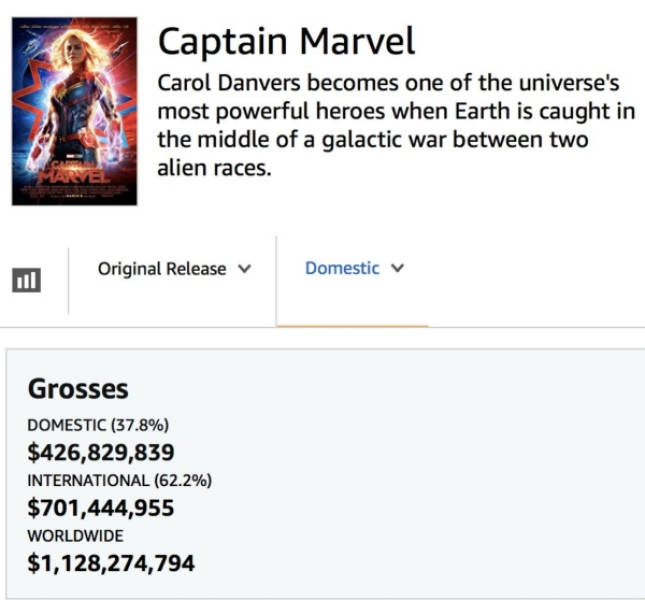 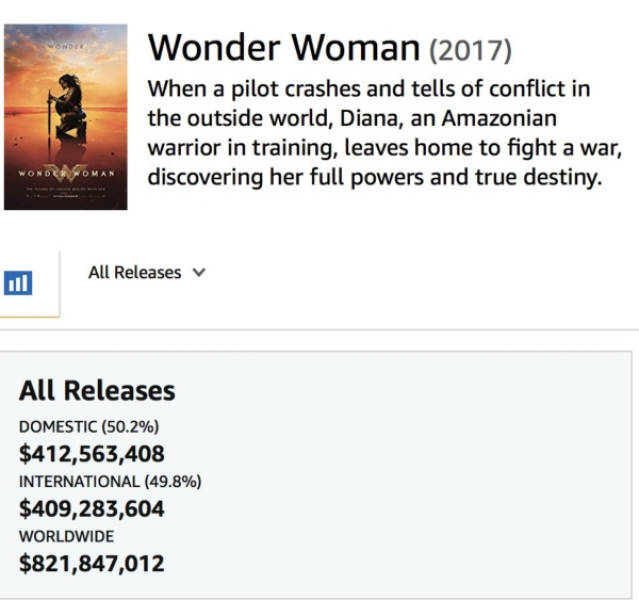 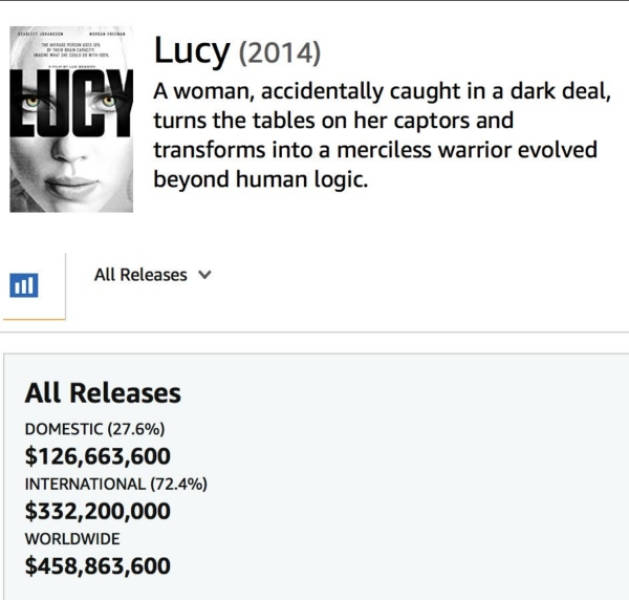 Beer 6 month s ago
While we're at it, let's make the failure of women's sports teams men's fault too:
like the soccer team for example. Never mind the fact that you a take slow, boring game, and make it even slower and more boring; it's men's fault that nobody is going to pay money to be bored out of their minds. But yeah, you should get the same money as, say, the NFL which people pay money for because, well, it's worth the money.

And for you young 'uns out there: 20 years ago we listened to the same garbage when the women's ice hockey team won the olympics: 'we deserve the same money, even though we can't sell a single ticket blah blah blah'. Newsflash: your act is boring; no one likes it; you don't sell tickets. That's why you don't get the money - because you don't generate any. ...And btw: the reason the women won at ice hockey is that other than Canada, no other country in the world had a team of women who could even skate. There were countries, such as China, whose teams literally looked like children wearing skates for the first time. But yeah, you deserve more money. Grow up.

Start your own league; sell your own tickets; and keep all the money. It's that simple. Oh yeah, you tried that. Didn't work. Like the WNBA.
Reply
2

Skier 6 month s ago
Did anyone actually know this film was coming out?
Reply
5

Alive 6 month s ago
Elizabeth Banks would be shocked that billions of people on this planet have never heard of her, and never will.
Reply
3

Valid 6 month s ago
A question then = do the idiots of Hollywood really think that mainstream normal ordinary men or women will WANT to shell out our cash to get preached to of special SJW snowflakes? Get bashed by leftist propaganda? Punched in the nose with somehow-superwomen? Not me. Some people will want that and be glad. I and apparently a very great many people do not.
Reply
10

Wrong 6 month s ago
Missing another point, how about blaming wonen not buying tickets? 3,5 billion on the planets so why just mad at men? Feminist c#nt
Reply
2

A bit confused this success is a reflection of the world's male population?
Reply
0

People 6 month s ago
I did not know about this movie until it failed, and now because of how she acted I will not watch it.
Reply