TL;DR: Ryan Langdon found out that not everyone can inwardly talk to themselves, and his mind was completely blown. He then decided to do some research on the topic… 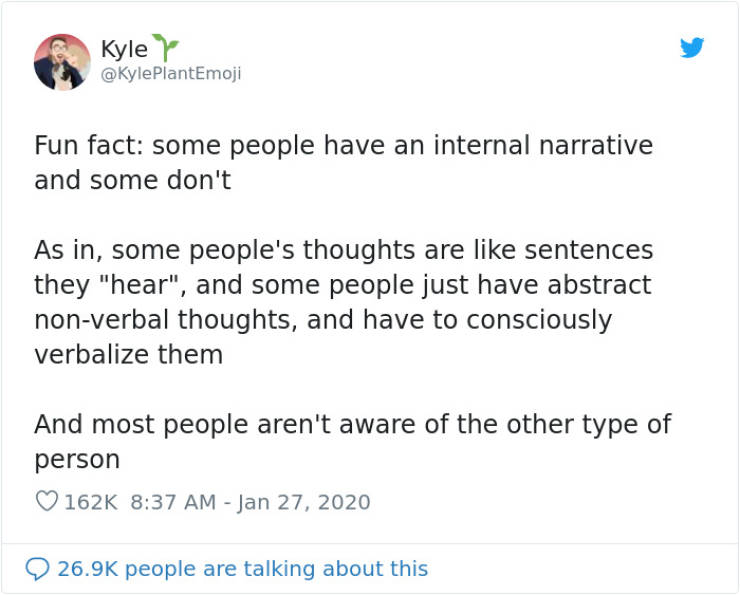 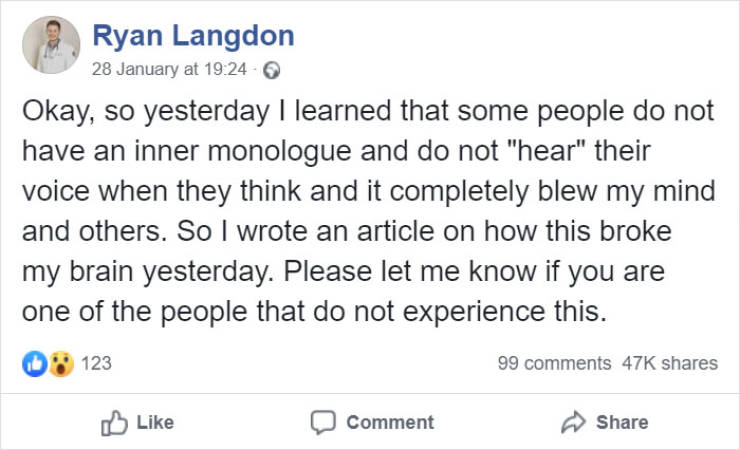 My day was completely ruined yesterday when I stumbled upon a fun fact that absolutely obliterated my mind. I saw this tweet yesterday that said that not everyone has an internal monologue in their head. All my life, I could hear my voice in my head and speak in full sentences as if I was talking out loud. I thought everyone experienced this, so I did not believe that it could be true at that time. Literally the first person I asked was a classmate of mine who said that she can not “hear” her voice in her mind. I asked her if she could have a conversation with herself in her head and she looked at me funny like I was the weird one in this situation. So I began to become more intrigued. Most people I asked said that they have this internal monologue that is running rampant throughout the day. However, every once in a while, someone would say that they don’t experience this. 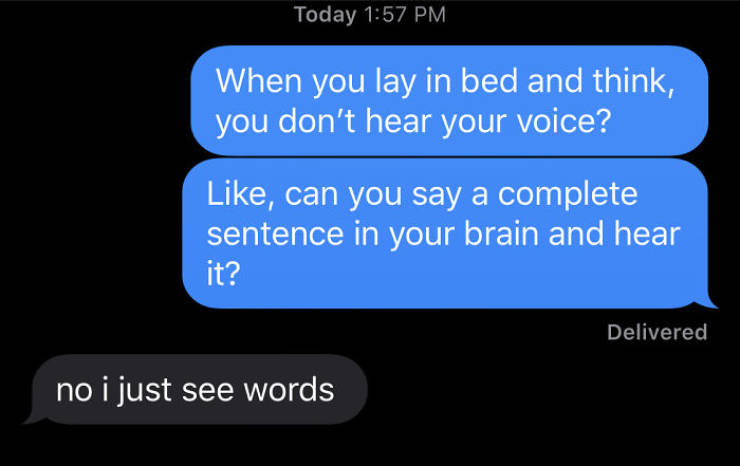 My life began to slowly spiral out of control with millions of questions. How do they get through the day? How do they read? How do they make decisions between choice A and choice B? My friend described it as “concept maps” that she sees in her brain. Another friend says that she literally sees the words in her head if she is trying to think about something. I was taking ibuprofen at this point in the day because my brain was literally unable to comprehend this revelation. How have I made it 25 years in life without realizing that people don’t think like me? 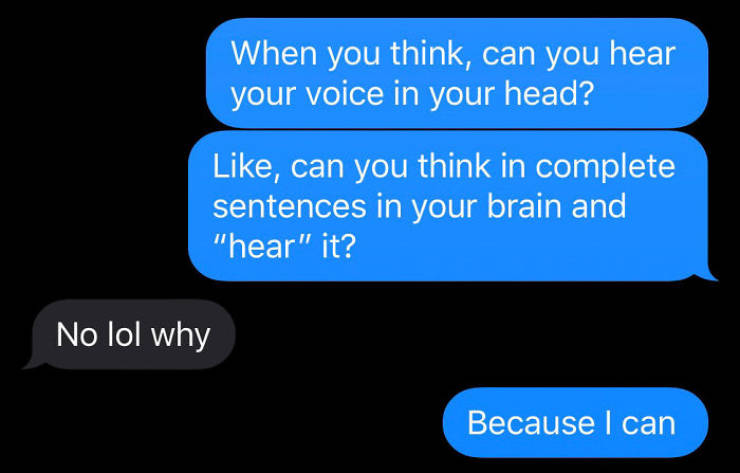 I posted a poll on Instagram to get a more accurate assessment of the situation. Currently, 91 people have responded that they have an internal monologue and 18 people reported that they do not have this. I began asking those people questions about the things that they experience and it is quite different from the majority. I would tell them that I could look at myself in the mirror and have a full-blown telepathic conversation with myself without opening my mouth and they responded as if I had schizophrenia. One person even mentioned that when they do voice-overs in movies of people’s thoughts, they “wished that it was real.” 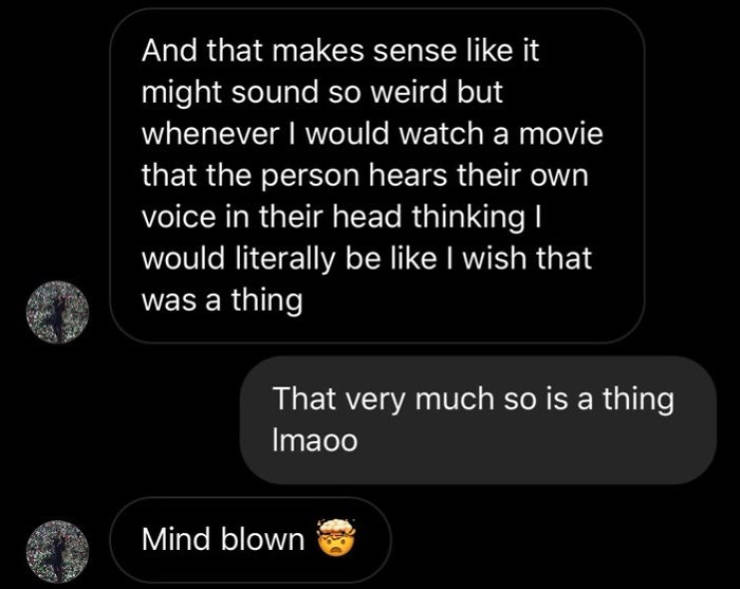 And to their surprise, they did not know that the majority of people do in fact experience that echoey voice in their head that is portrayed in TV and film. Another person said that if they tried to have a conversation with themselves in the mirror, they would have to speak out loud because they can’t physically do it inside of their mind. 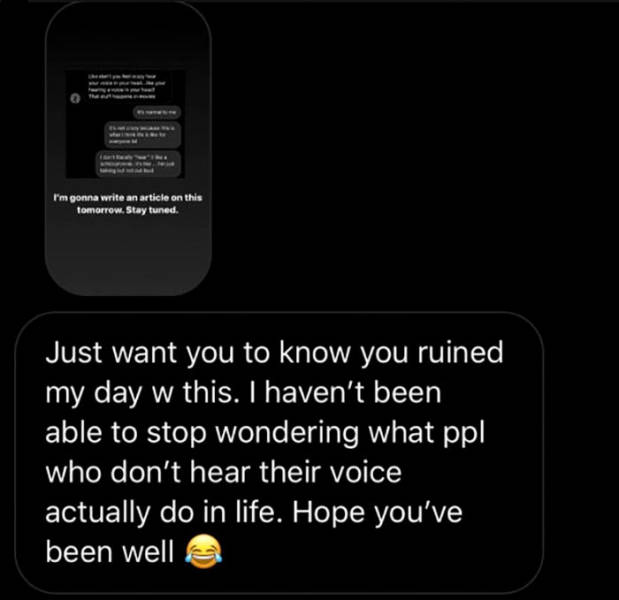 I started posting screenshots of these conversations on my Instagram and my inbox started to flood with people responding to my “investigation.” Many people were reassuring me that I was not crazy about having an internal monologue, while others were as absolutely mind blown as I was. People were telling me that I ruined their day and that they now do not understand anything about life. Maybe you are all just a figment of my imagination, but regardless, yesterday made reality seem even more skewed. How do they think? How does this affect their relationships, jobs, experiences, education? How has this not been mentioned to me before? All of these questions started flooding my mind. Can those people without the internal monologue even formulate these questions in their mind? If they can, how does it happen if they don’t “hear” their voice? I mentioned earlier that I was spiraling out of control. Well, as I write this and as I hear my own voice in my head, I am continuing to fall down the rabbit hole. 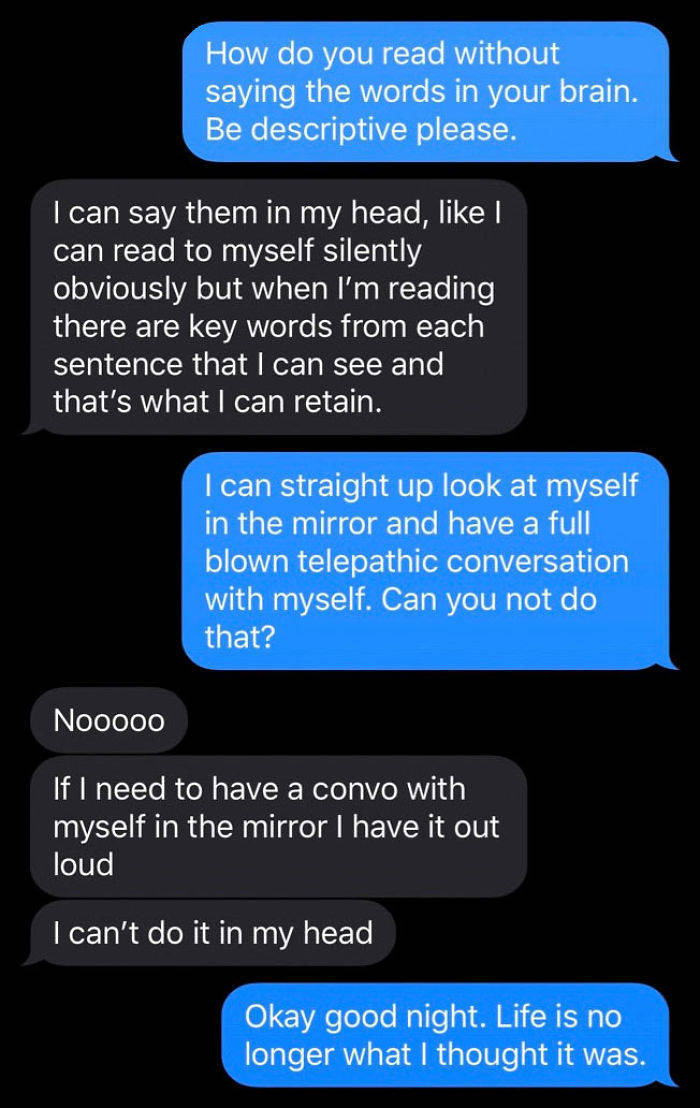 Whether people just have different definitions of their thoughts, or if people literally don’t have an internal monologue, there is one thing that we do know… you will definitely get a headache if you keep thinking about this. Just trying to wrap my head around it is causing irreversible brain damage. I suggest asking people around you what they experience. If you are one of the few that do not have this internal monologue, please enlighten me, because I still do not understand life anymore. Send help.

“Hundreds have DMed me about this topic,” Langdon said. “[Both] the people who could verbalize their thoughts (team neuroverbal) and the ones that couldn’t (team neurovisual).”

So far, the man doesn’t plan to continue his studies. “I hope real scientists take this thing that I made so many people [can become] aware of [it] and make big changes to how we address mental health.” 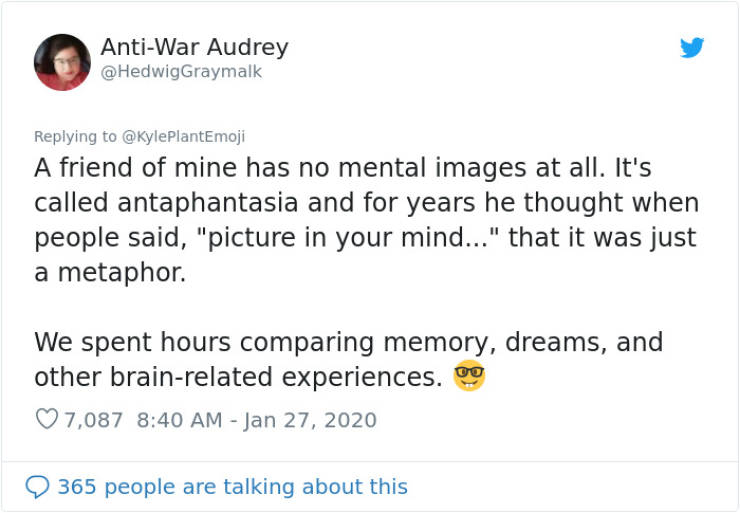 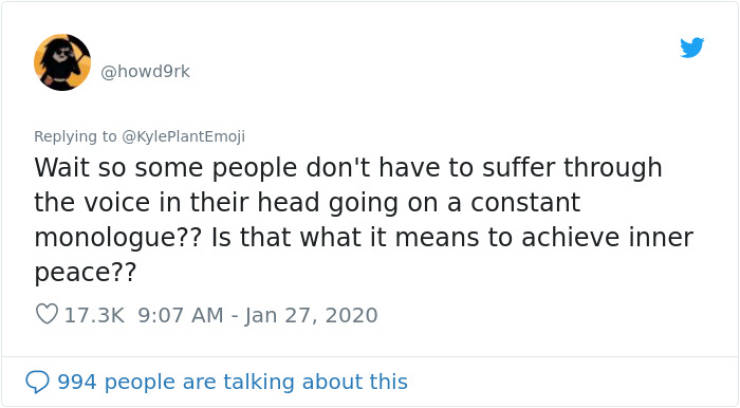 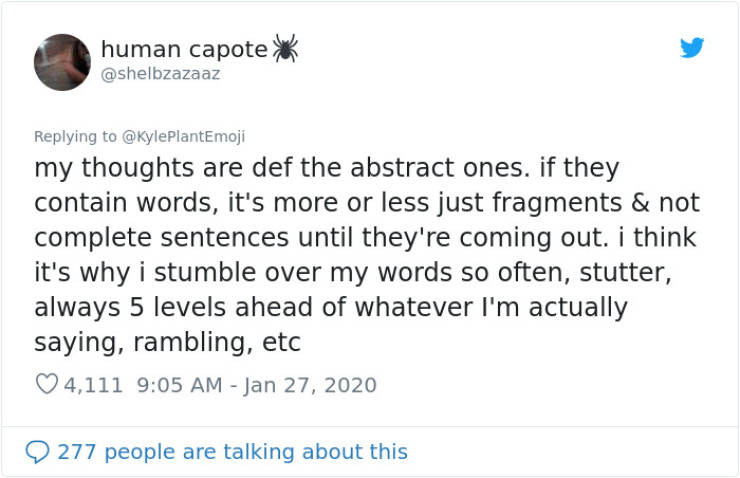 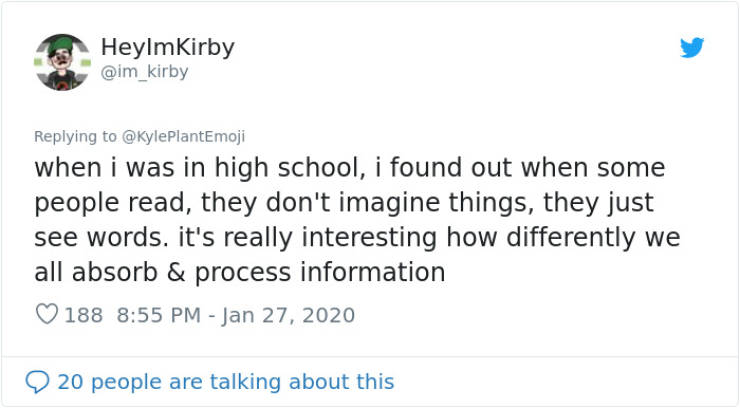 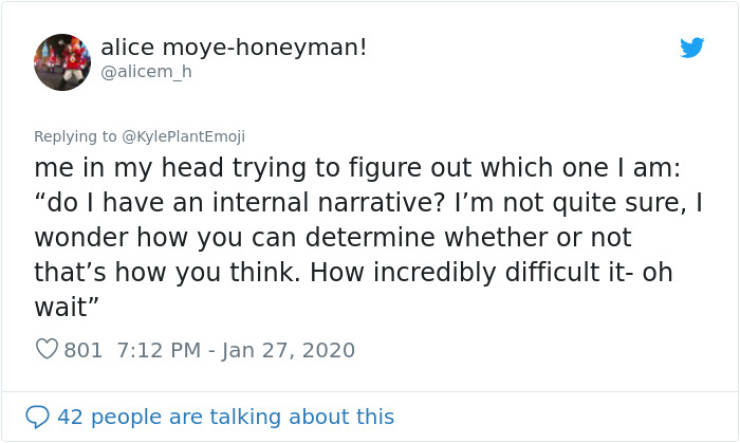 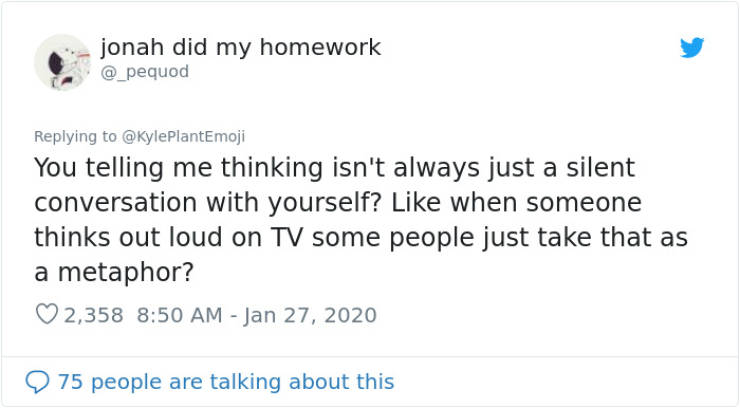 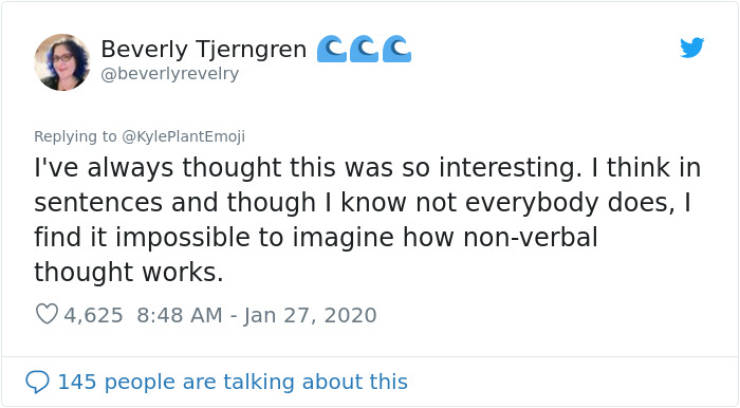 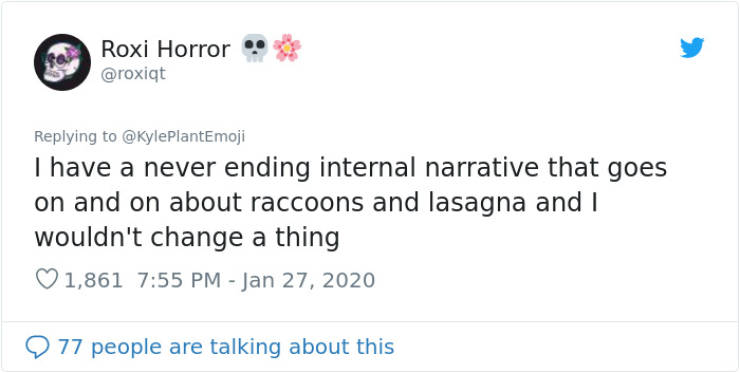 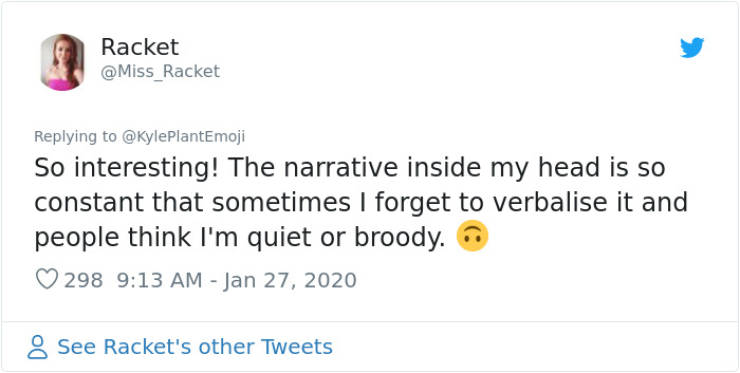 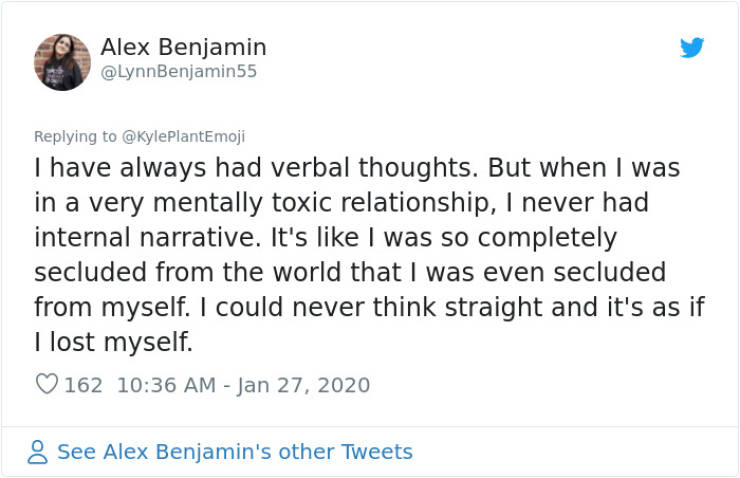 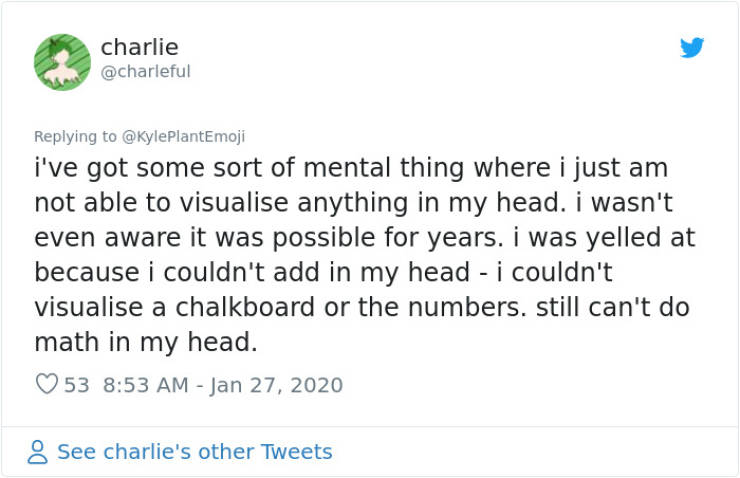 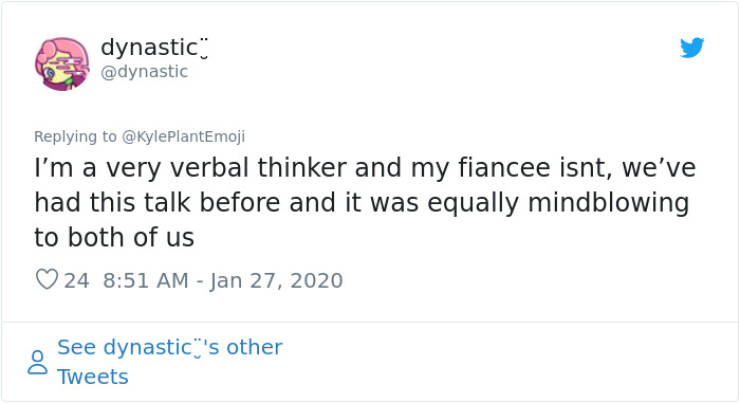 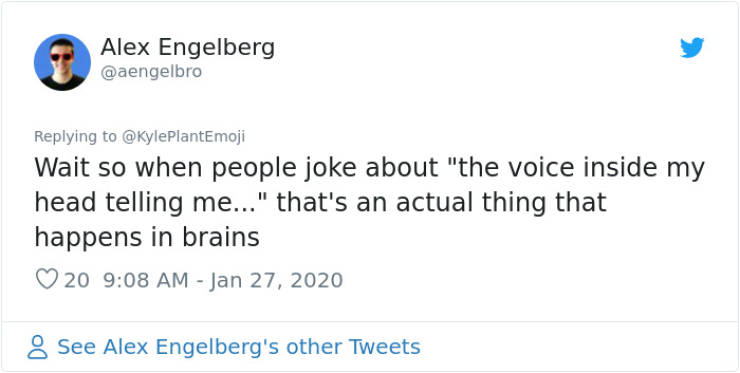 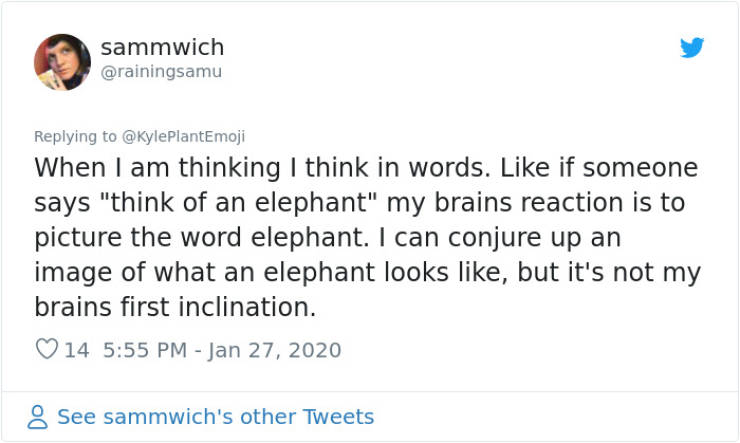 Stage 6 month s ago
And then there are leftists, which don't think at all.

Place 6 month s ago
I have both. I can do it internally or verbally. I rarely remember my dreams though, and they are always in black and white. Never had a dream in color.
Reply