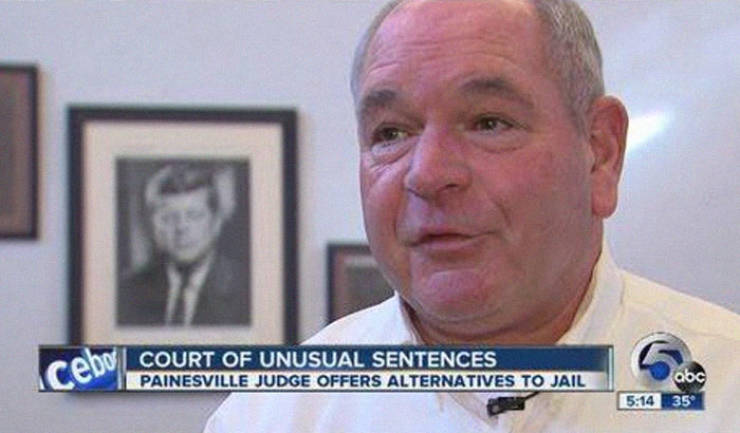 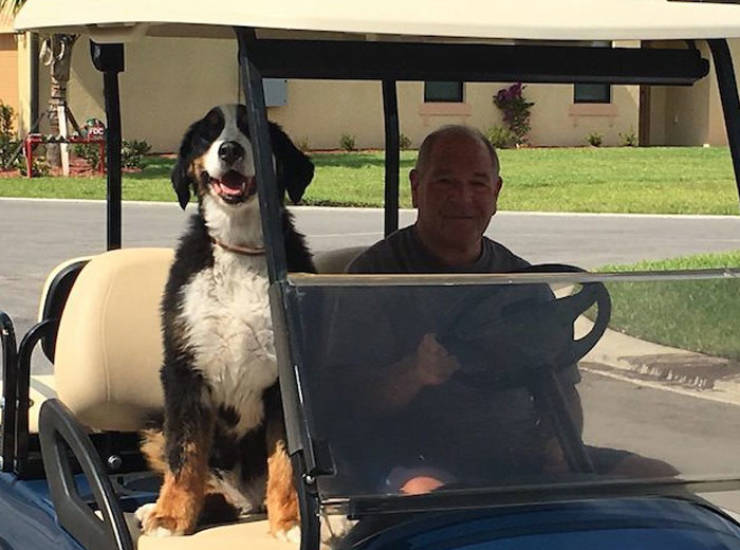 He made one woman, who left 35 kittens in the woods, spend a night in the woods all by herself 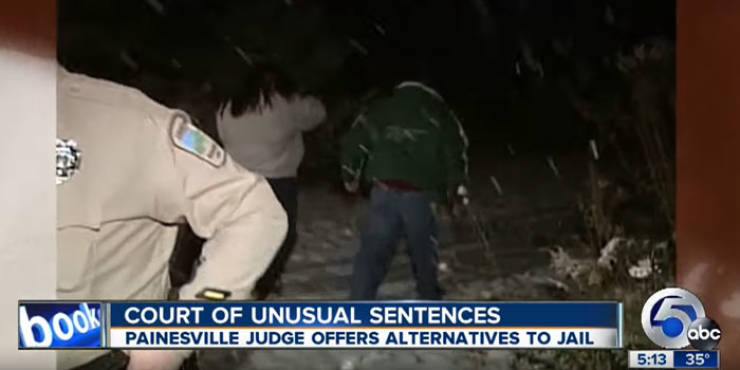 Meanwhile, a woman who kept her dog in filth spent the day in the town dump 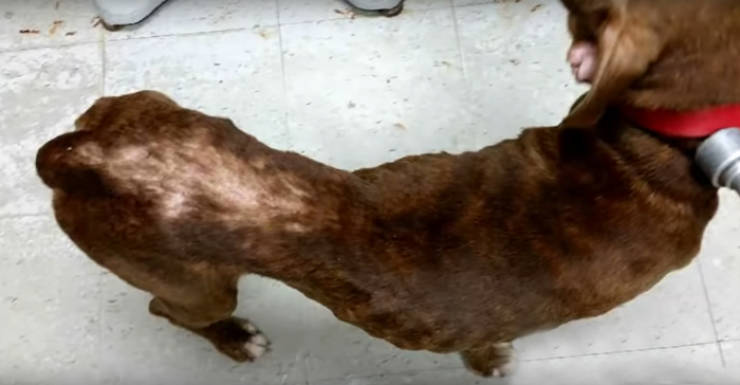 You can hear the judge talking to the defendant right here

But what kinds of punishments did the judge give out? In one case, a woman abandoned 35 kittens (yes, you read that right—35) in the woods. So the judge knew she needed some help understanding that what she did was wrong.

He sentenced her to spend a night in the woods. Here’s what he said to her that time: “How would you like to be dumped off at a metro park late at night, spend the night listening to the coyotes, listening to the raccoons around you in the dark night, and sit out there in the cold not knowing where you’re going to get your next meal, not knowing when you are going to be rescued?”

Meanwhile, the judge sentenced another woman whose dog was living in filth to spend a day at the local dump. “I want you to go down to the county dump, to the landfill, and I want them to find the stinkiest, smelliest, God-awful odor place they can find in that dump and I want you to sit there for eight hours tomorrow, to think about what you did to that dog while you smell the odor. If you puke, you puke.” Now those are some seriously Biblical punishments. 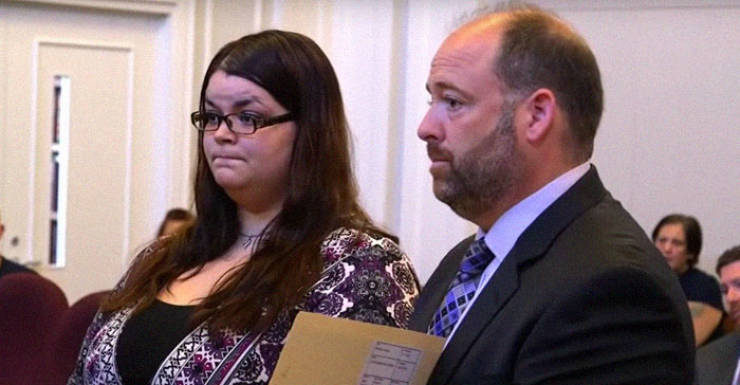 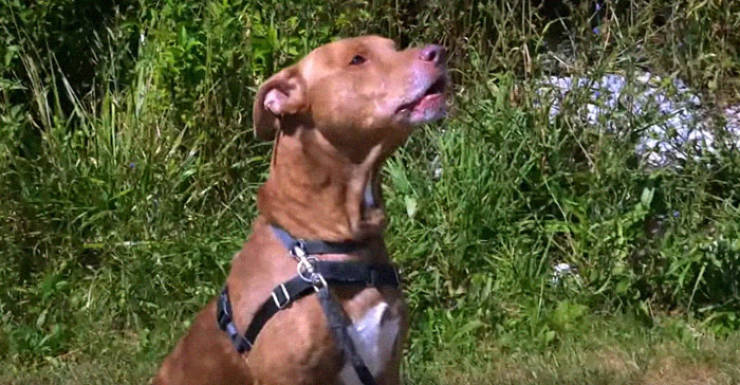 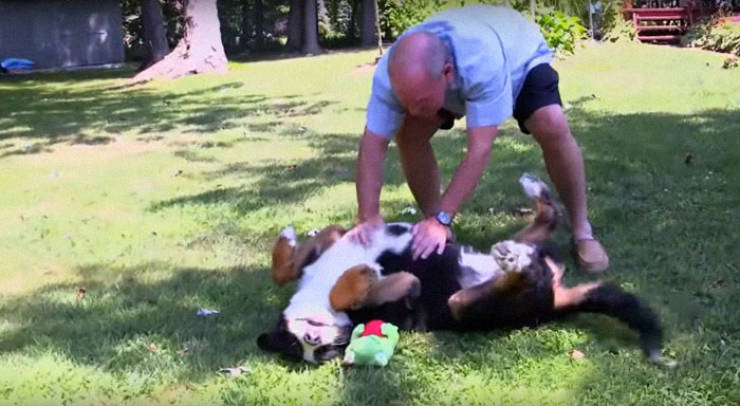 Judge Cicconetti started doling out these punishments when he realized that jail time only leads to offenders repeating their crimes. According to the judge, he always makes sure that the sentence fits the crime. Judge Cicconetti absolutely adores animals. That love for all living things started when he got his very first dog, Herman (he was a Dachshund). Now, the judge has a 10-year-old Bernese mountain doggo named Kasey.

Here are some more of the judge’s unusual sentences:

-A man who committed child abuse was sent to a school in a dog outfit and had to talk about child safety.

-During heavy blizzards, he ordered defendants to clear snow at a retirement home.

-A man caught with a loaded gun was sent to a morgue to see corpses.

-A young man who stole a bicycle spent 10 days riding a bicycle to support a local charity.

-A man who shot a dog was sentenced to donating 40 lbs of dog food on every holiday to the Lake County Animal Shelter.

-Two teenagers who scrawled 666 on a nativity figure of Jesus had to lead a donkey through the streets, with a sign saying: “Sorry for the jackass offense, but he is soooo cute!”

-Teenagers who flattened tires on school buses were ordered to throw a picnic for the primary school children whose outing was canceled due to the prank.

-A man who committed a traffic violation while shouting “pigs” at police officers was made to stand on a street corner with a 350-pound pig and a sign that said “This is not a police officer.”

-An 18-year-old male who stole pornography from an adult book store was ordered to sit outside the store wearing a blindfold and holding a sign that read “See no evil.”

-In January 2008, Cicconetti sentenced a man who stole a red collection kettle holding about $250 from the Salvation Army to spend 24 hours homeless.

-A woman who was convicted of stealing from a church was ordered to spell out the sentence “I stole coins from this church” entirely in coins and apologize to each worshipper as they entered the church.

-A woman who skipped out on a cab fare was ordered to walk 30 miles in 48 hours. Thirty miles was the distance the cab driver had driven her before she skipped out on the fare.

-A woman who pleaded guilty to assault for using pepper spray on a man was given the choice to serve 30 days in jail or serve three days of community service and be shot herself with pepper spray. After agreeing to the latter she was sprayed and found out it was only water.

-A nanny accused of hitting a boy with a belt was compelled to read articles on the consequences of child abuse, and then discuss them in the courtroom in front of the judge, the victim’s mother, and spectators.

Internet users thought that the judge’s sentences were spot-on

Martial 6 month s ago
Wow, someone who actually cares. Humiliation works a lot better to change people than jail or fees.
Reply
0

Push 6 month s ago
Why does this judge remind me of my old favorite 80's movie Doc Hollywood? Good going!
Reply
-1

Journalist 5 month s ago
#3 ... survival rate for the animals admitted to shelters drops to 12%, that's reality, so it goes without saying what has been done is wrong, nevertheless in that particular case dozen kittens had chance to survive vs. only 2, may be 3 in the shelter.
Reply