Not All Movie Posters Are Perfect… (26 pics)

Sex and the City 2 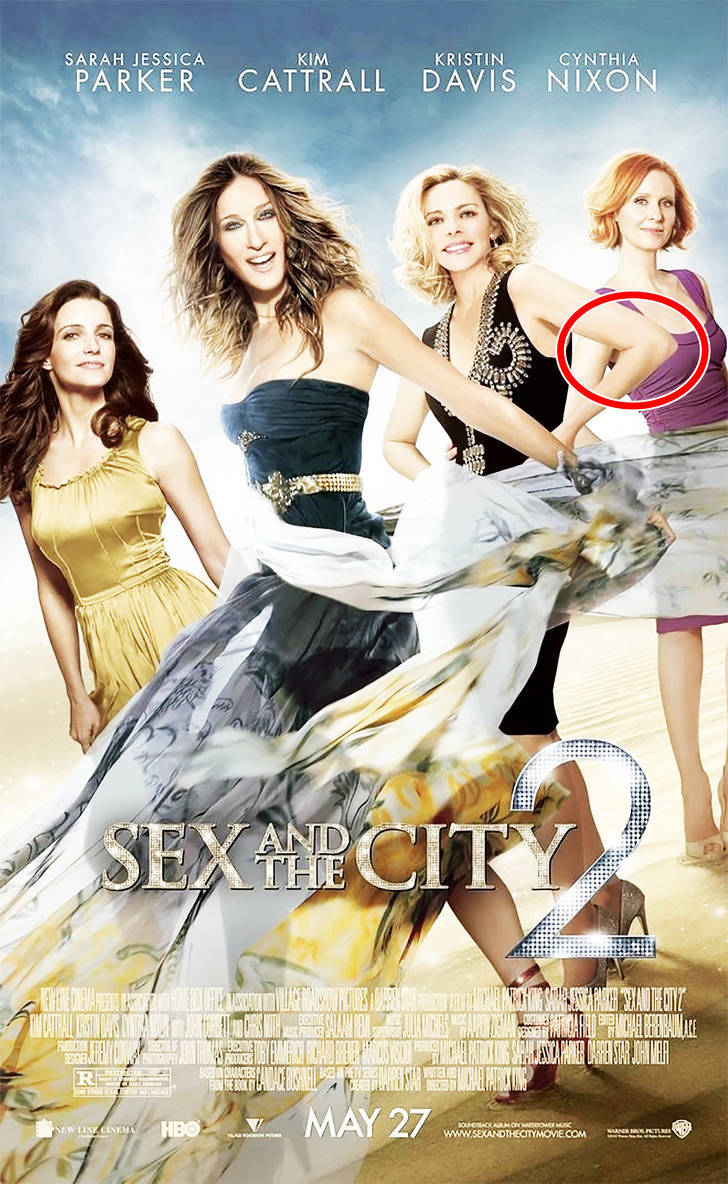 Kim Cattrall’s elbow turned out to be bigger than her neck and her forearm is incredibly long.

Death at a Funeral 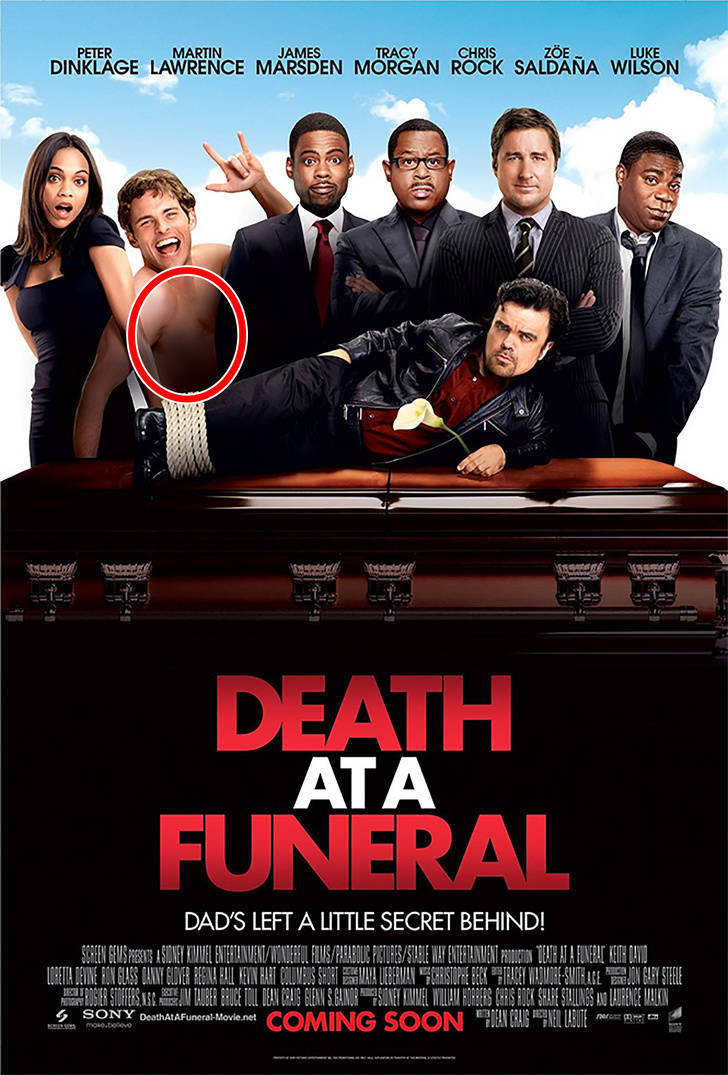 The designers obviously forgot to make everything about the film funny (including the poster) and failed to add something to one of the character’s chests. 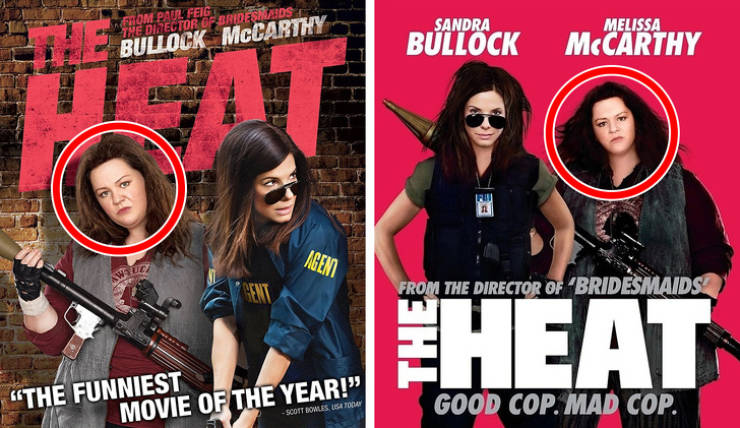 Actress Melissa McCarthy has never been embarrassed about her size but one graphic designer still decided to edit her picture — and we think it was a tad overkill. 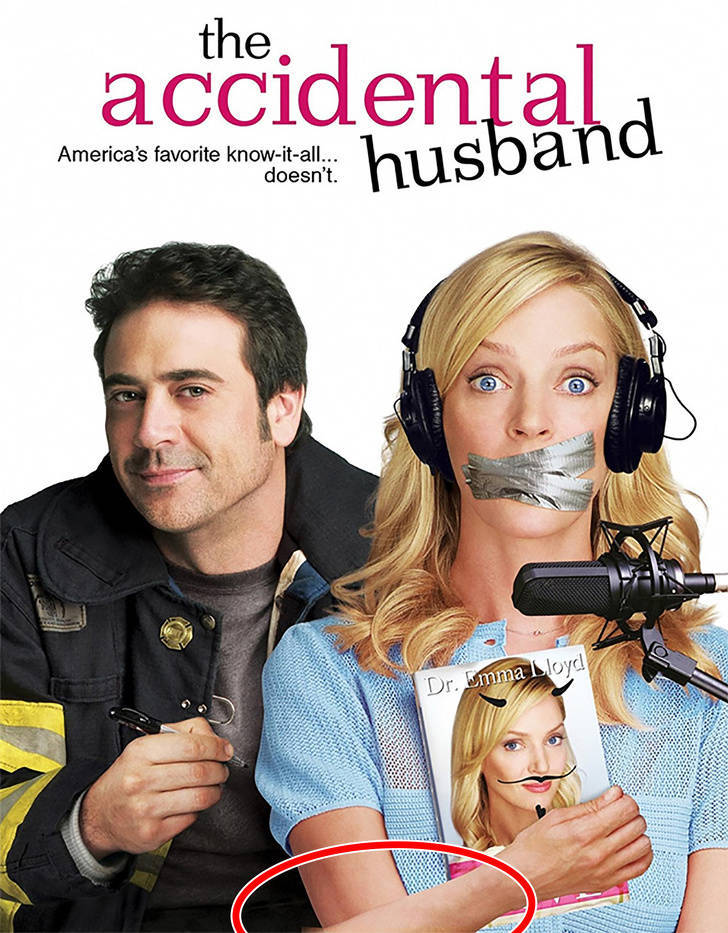 There was probably something really distracting happening while the designer of this poster was working. In the first poster, he never quite figured out where Uma Thurman’s elbow should be. 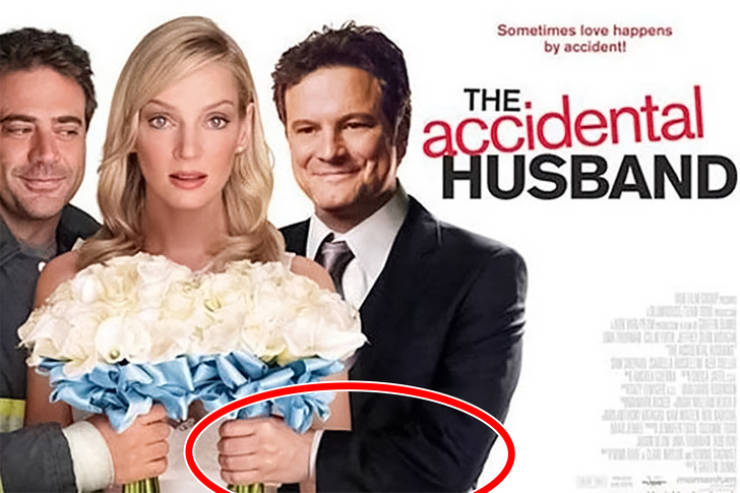 And in this poster, Colin Firth’s arm is really short and his wrist looks incredibly wide. 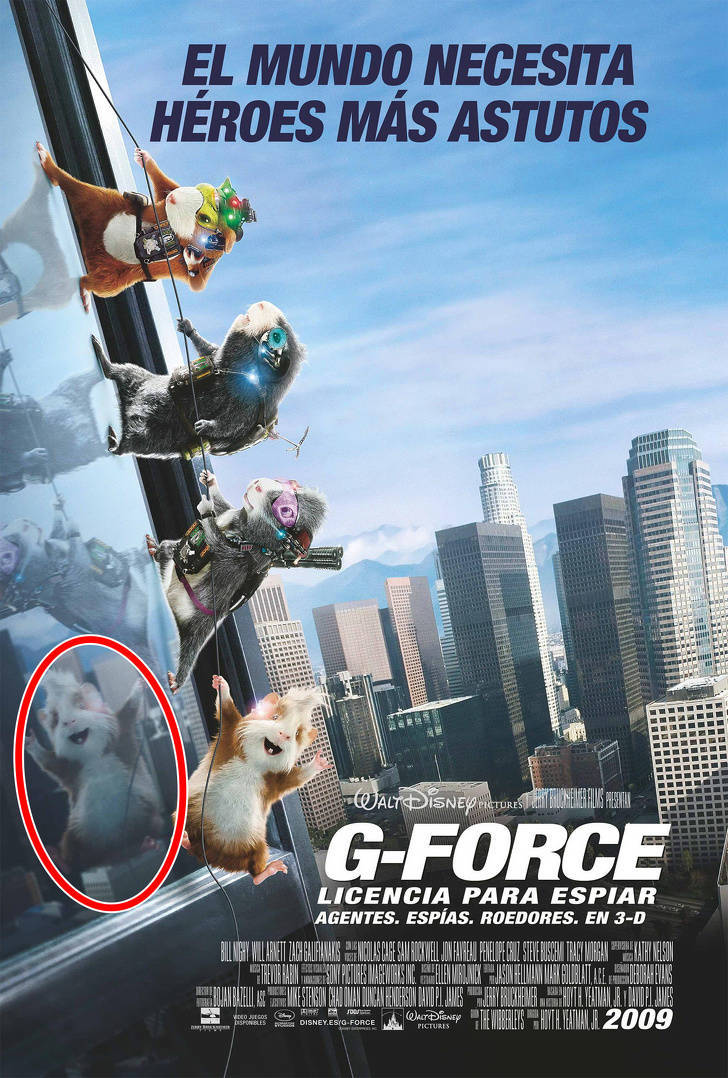 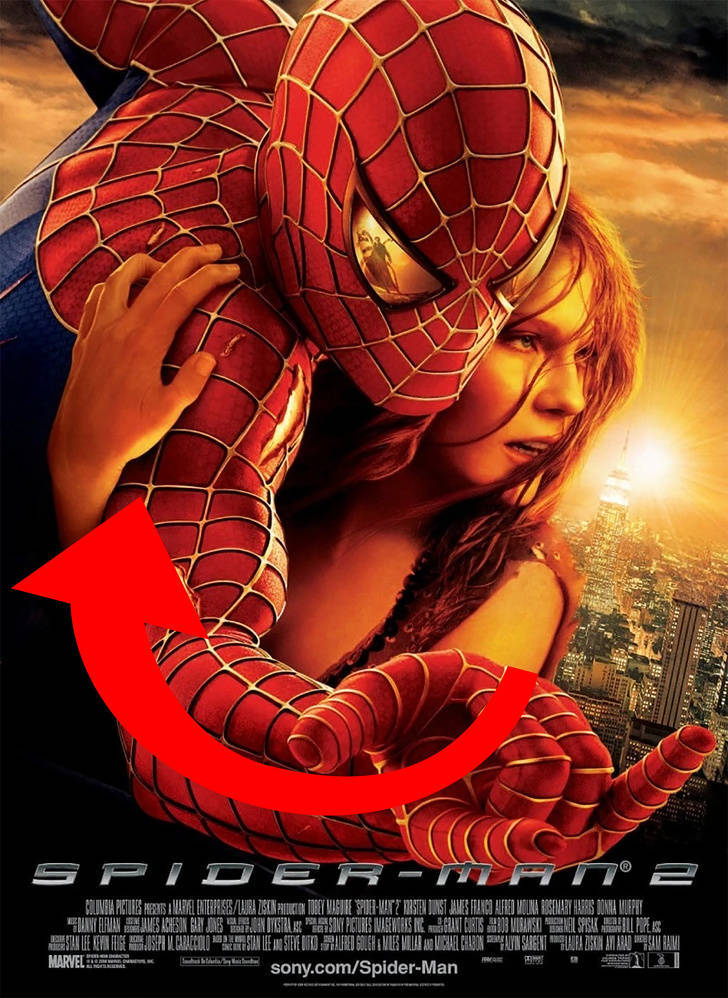 Most likely, the designer of this poster didn’t know much about human anatomy. It’s hard to believe that Kirsten Dunst would be able to hug Spider-Man unless she had a rubber arm that could stretch.

The Amazing Spider-Man 2: Rise of Electro 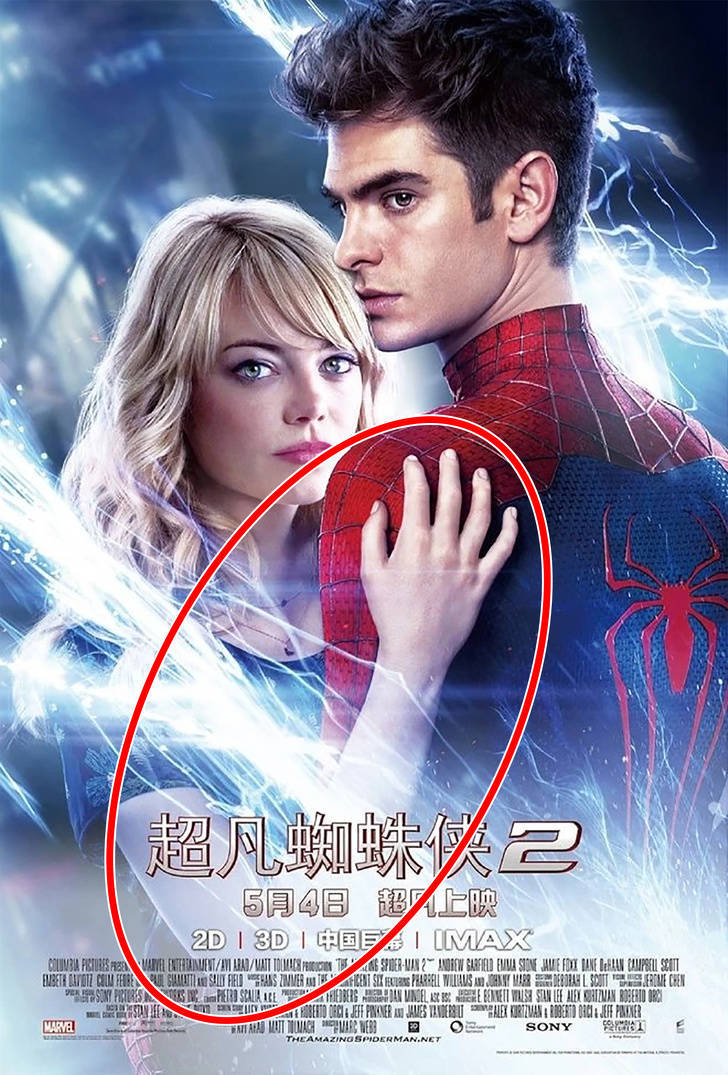 Somehow, another Spider-Man film made our list! And again, the film’s leading actress, Emma Stone, has an arm that’s incredibly long and unrealistic. The hand holding the camera looks as if it belongs to someone else but not to Rober De Niro. Otherwise, it’s hard to imagine how this shot would’ve been taken by a camera at this angle. 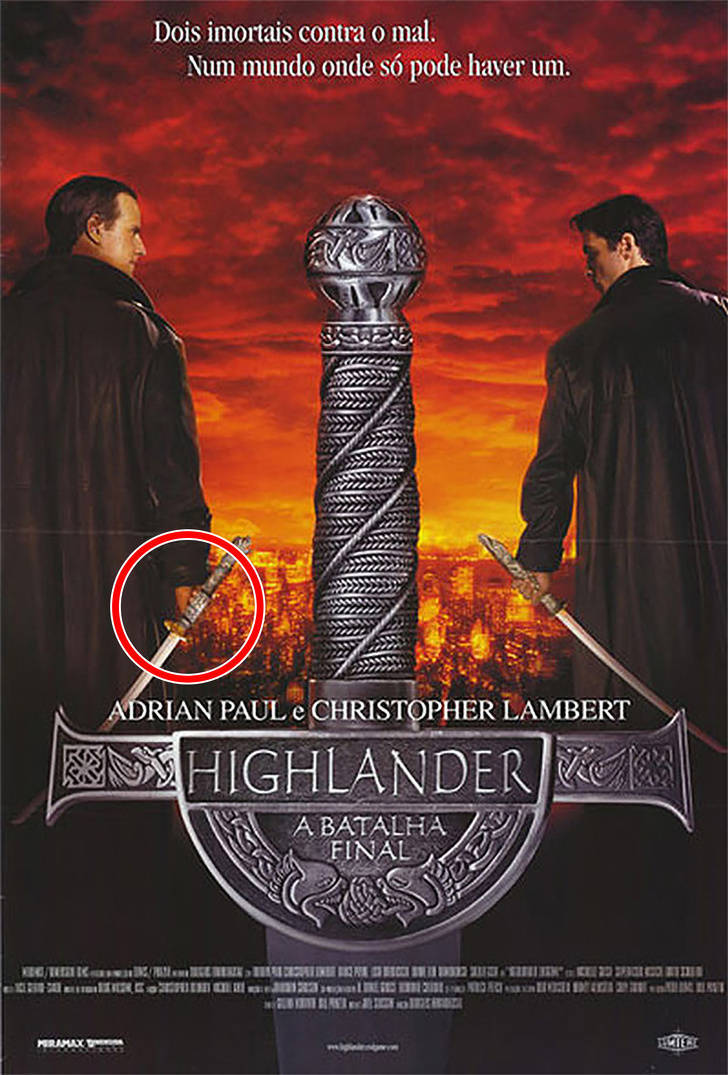 The designer of this poster obviously didn’t care much about their work since they decided to place the sword just above the actor’s hand as if it were just floating there. 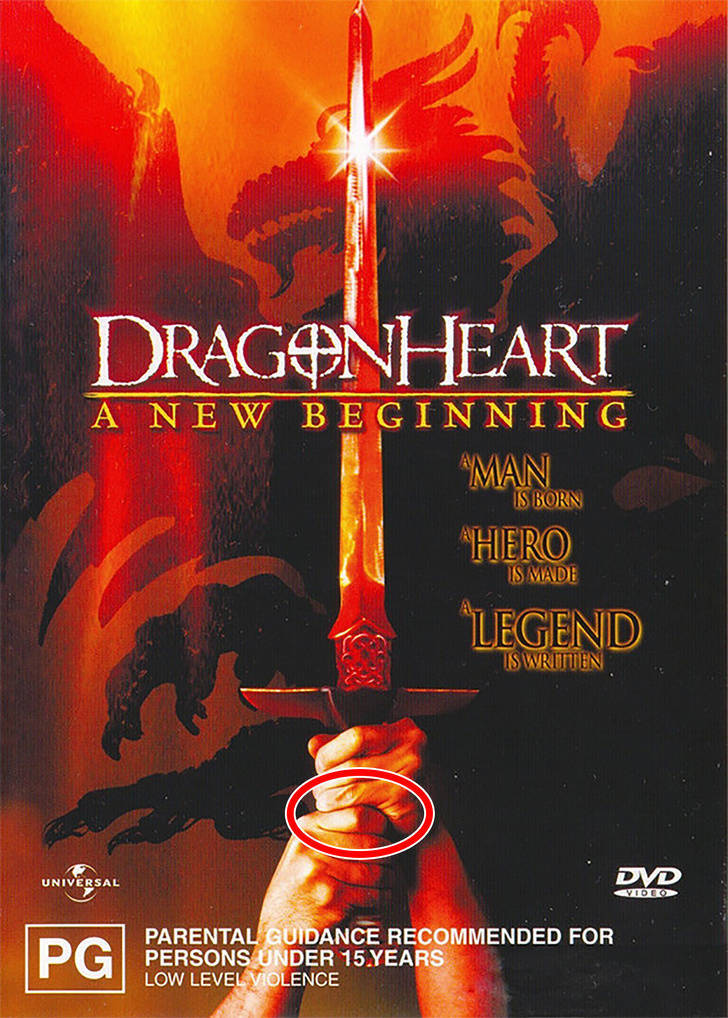 Look closely at this poster and count the number of fingers on the sword. It seems that someone erased one of the fingers and only a knuckle is visible. 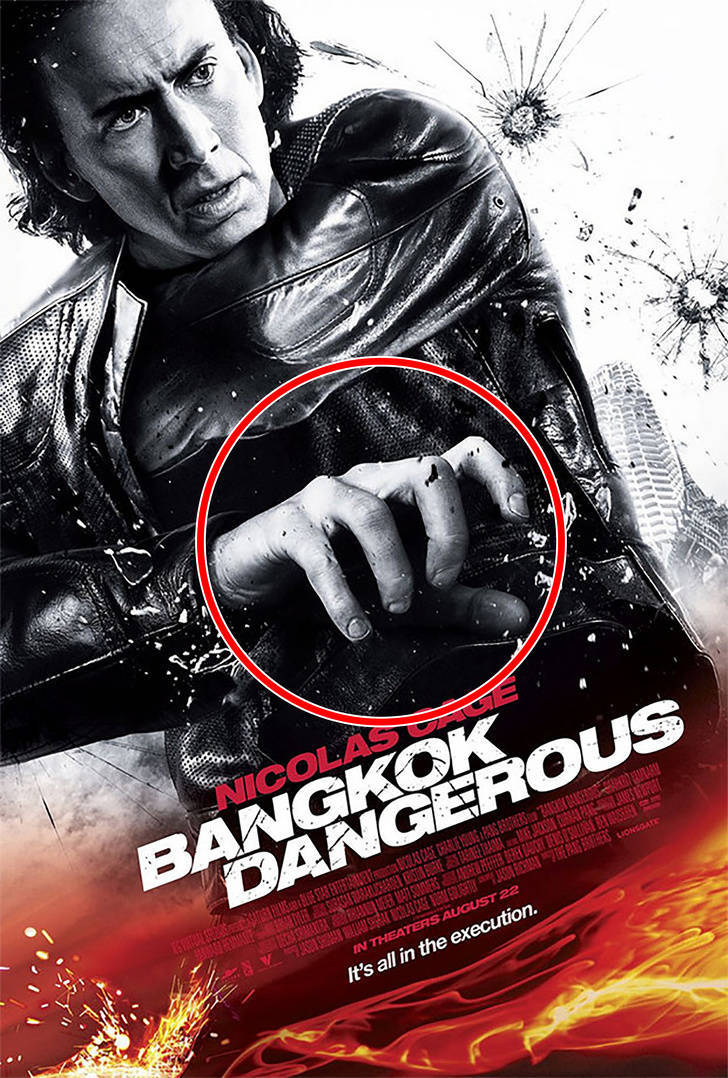 It looks like Nicholas Cage was supposed to be holding something in his hand but the designer forgot about it. Otherwise, why would Cage do this with his hand? 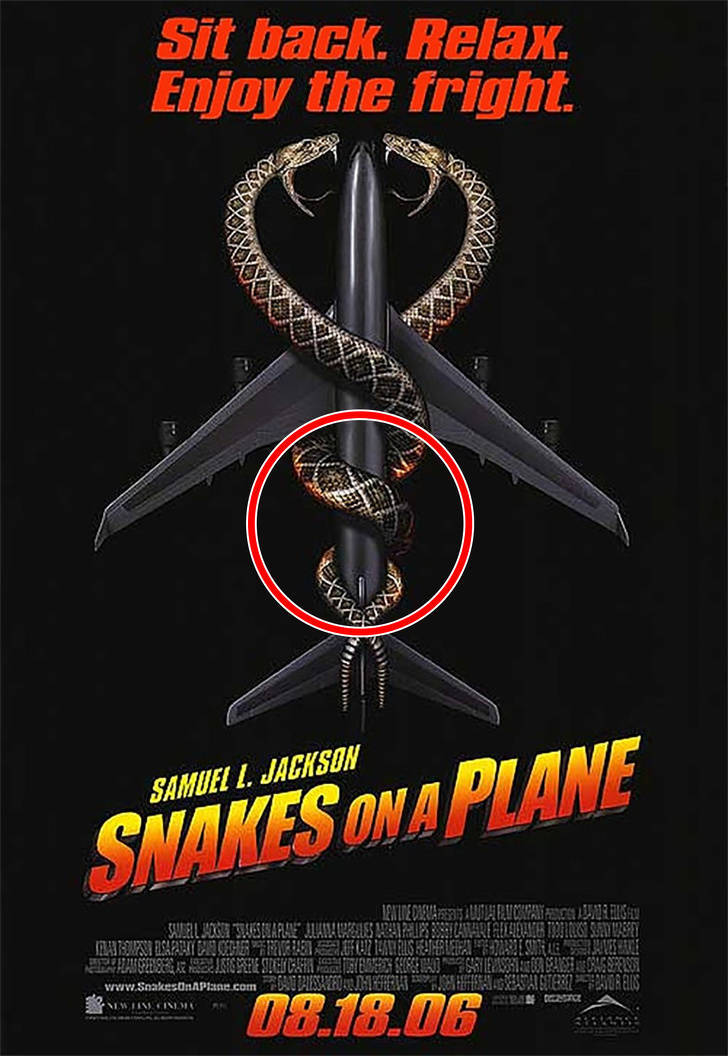 If you look closely, you can see that a part of the snake is gone. 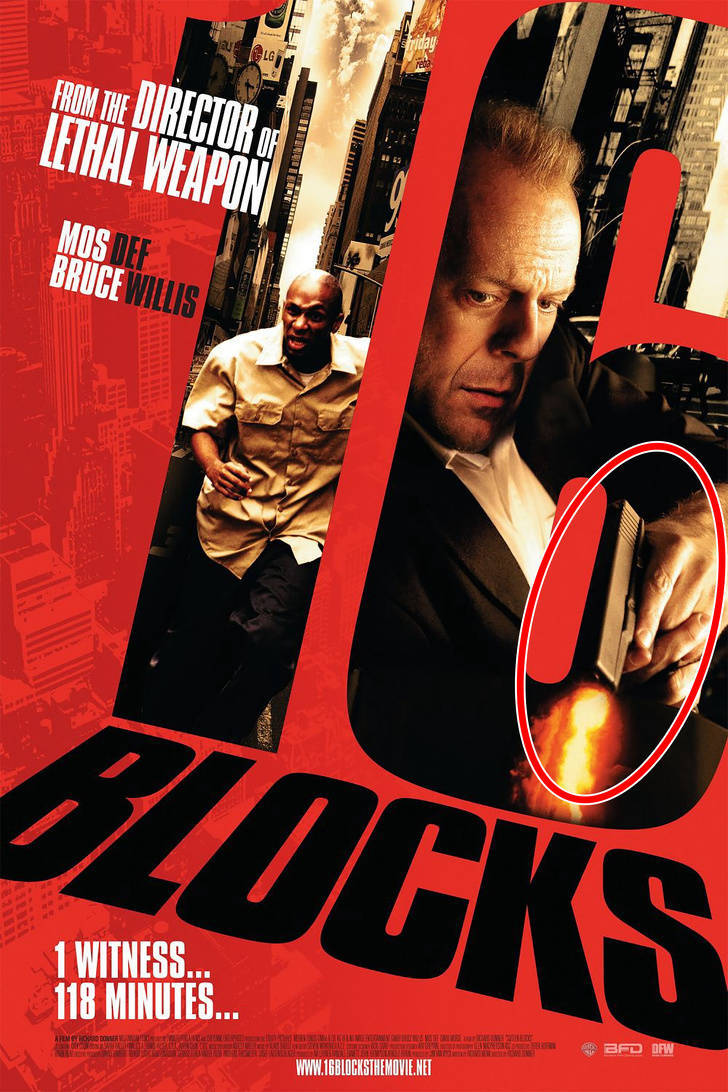 There’s nothing really interesting about this poster other than the fact that Bruce Willis doesn’t have a mustache but his character in the film does. Also, the gun is shooting even though his finger isn’t on the trigger. 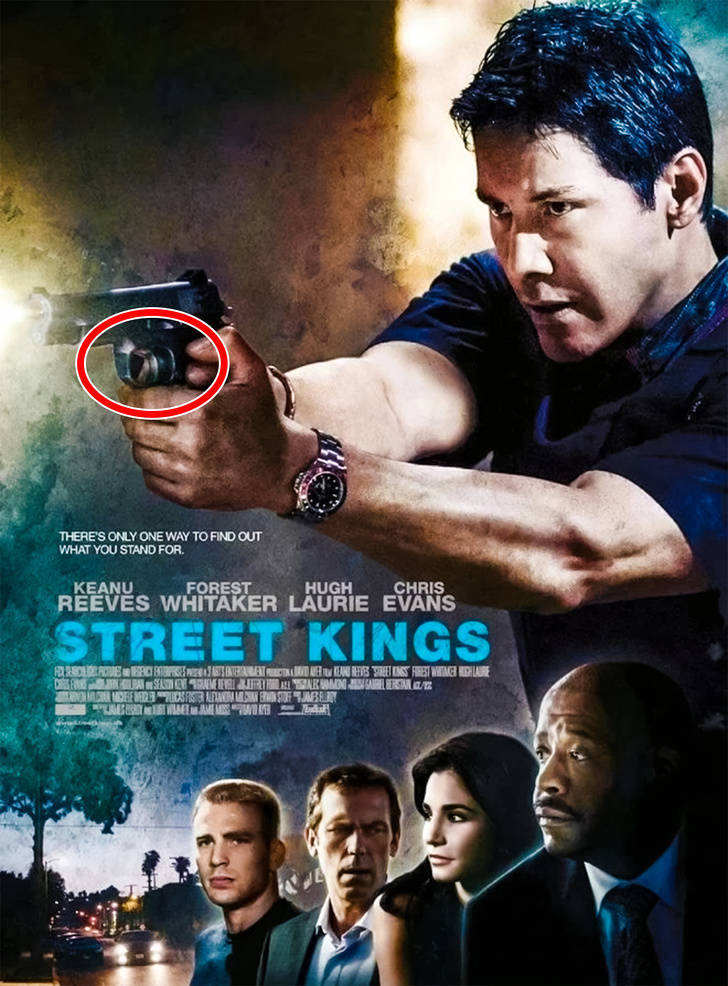 Keanu Reeves can also shoot a gun with the power of his mind as he doesn’t need to pull the trigger to make a shot.

Godzilla: King of the Monsters 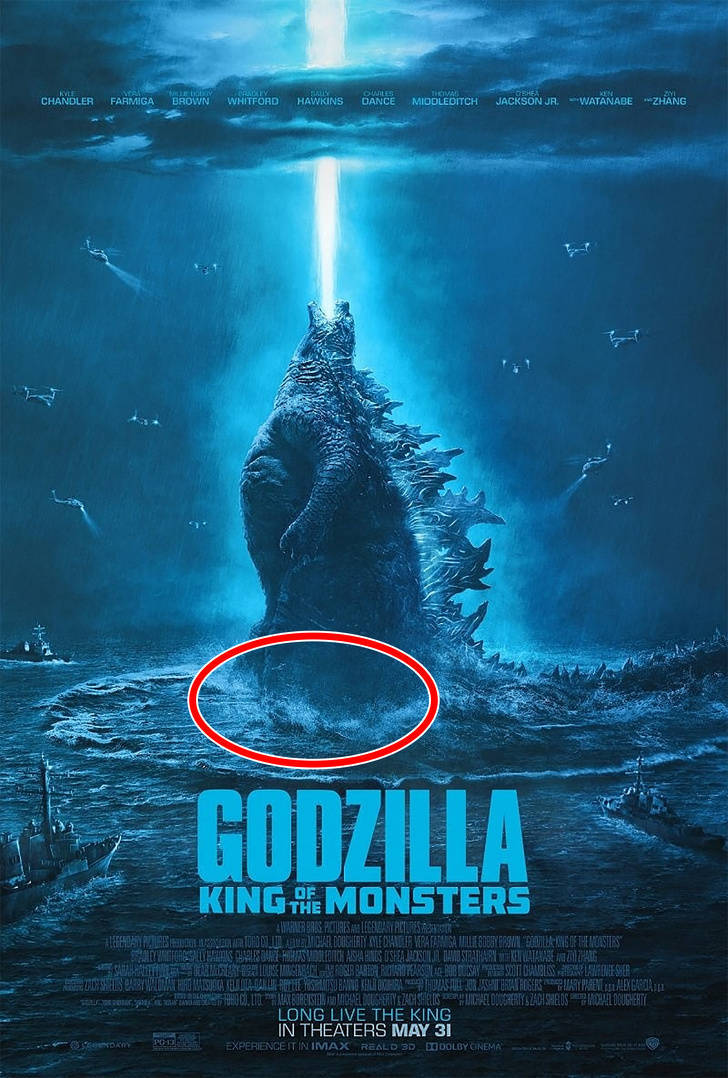 There was a small scandal that took place over this poster. The viewers couldn’t understand how Godzilla could just float in the water. What is the lizard standing on? 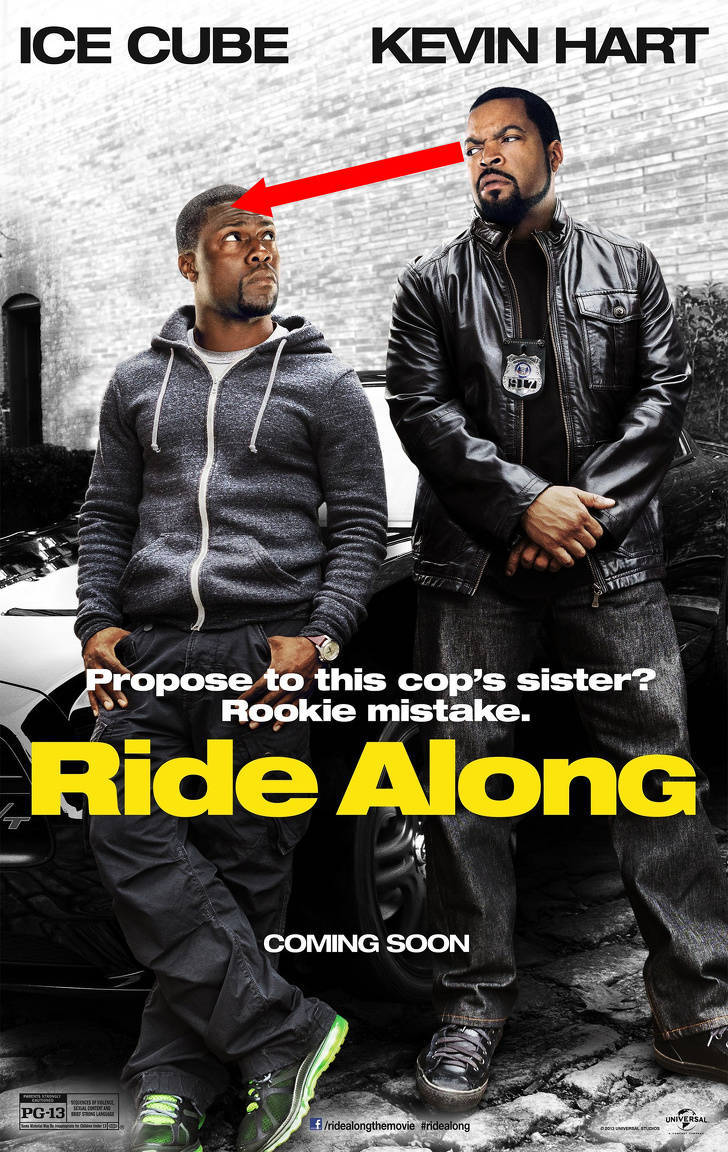 For some reason, the designer decided to place the characters in a way so that Ice Cube could look directly at Kevin Hart’s forehead. Even though in real life they’re almost the same height, the poster gives the impression that one of them is significantly taller than the other. 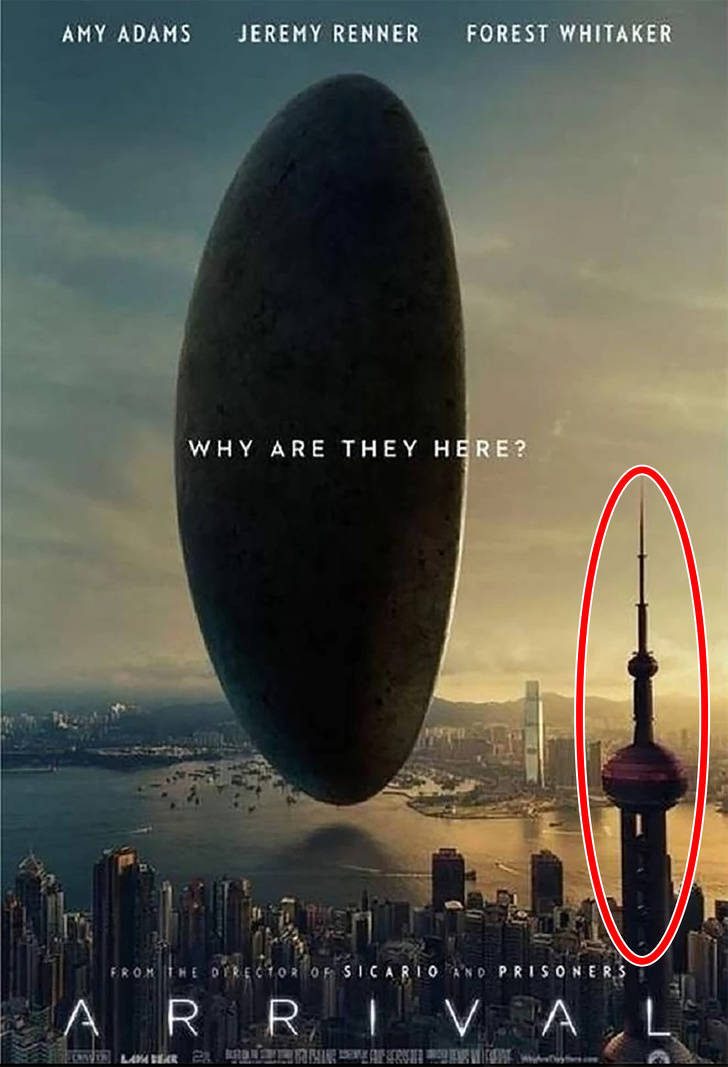 At first sight, the poster looks perfectly normal for an alien movie. But in Hong Kong, you can see the poster doesn’t have the Oriental Pearl Tower because it’s actually in Shanghai. 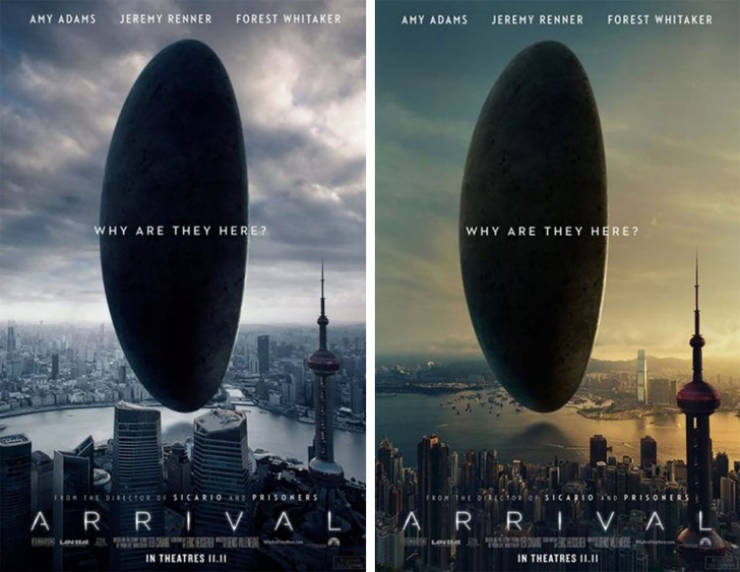 This poster caused such an outcry in Hong Kong that the creators had to change it very quickly. That’s why the designers moved the alien ship to Shanghai. 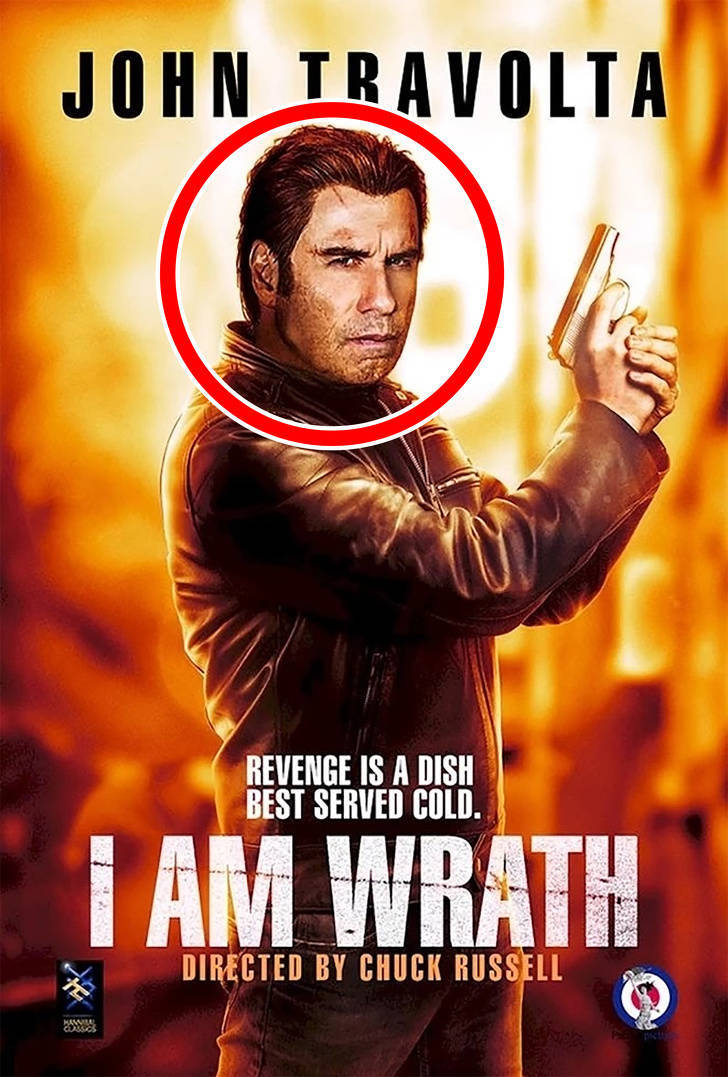 A designer did something weird with John Travolta’s head in this poster. For some reason, it looks disproportionate to his body. 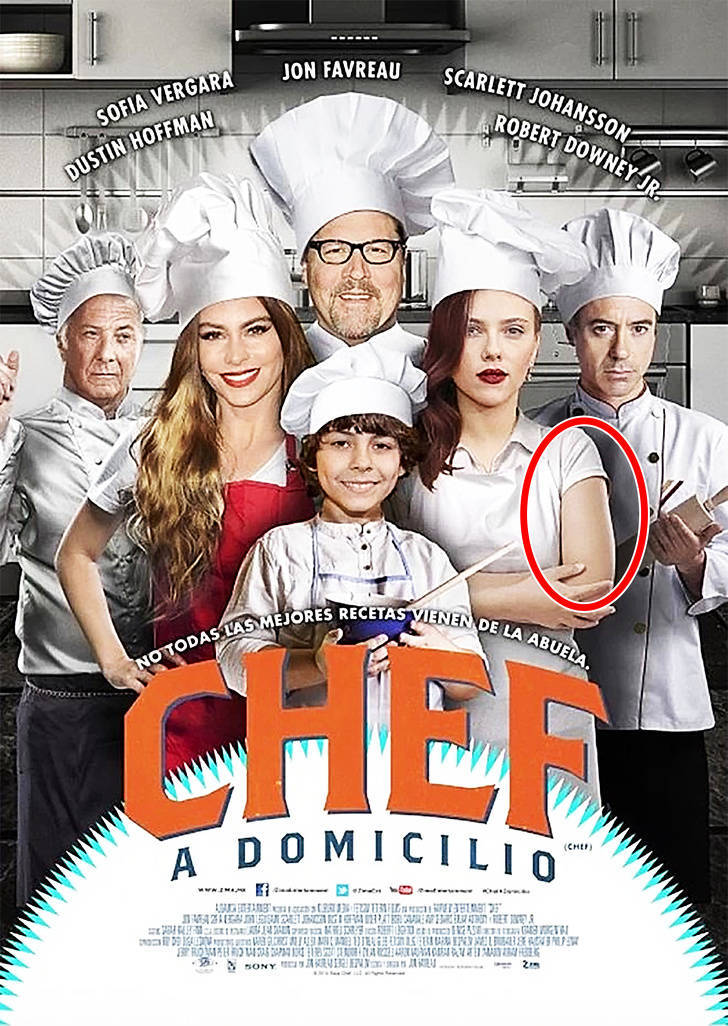 The hands of Scarlett Johansson have a different skin color than her head. And the photo of Sofía Vergara looks as if it was taken on the red carpet and then edited into this poster. Also, her head looks too big compared to her body.

The Greening of Whitney Brown 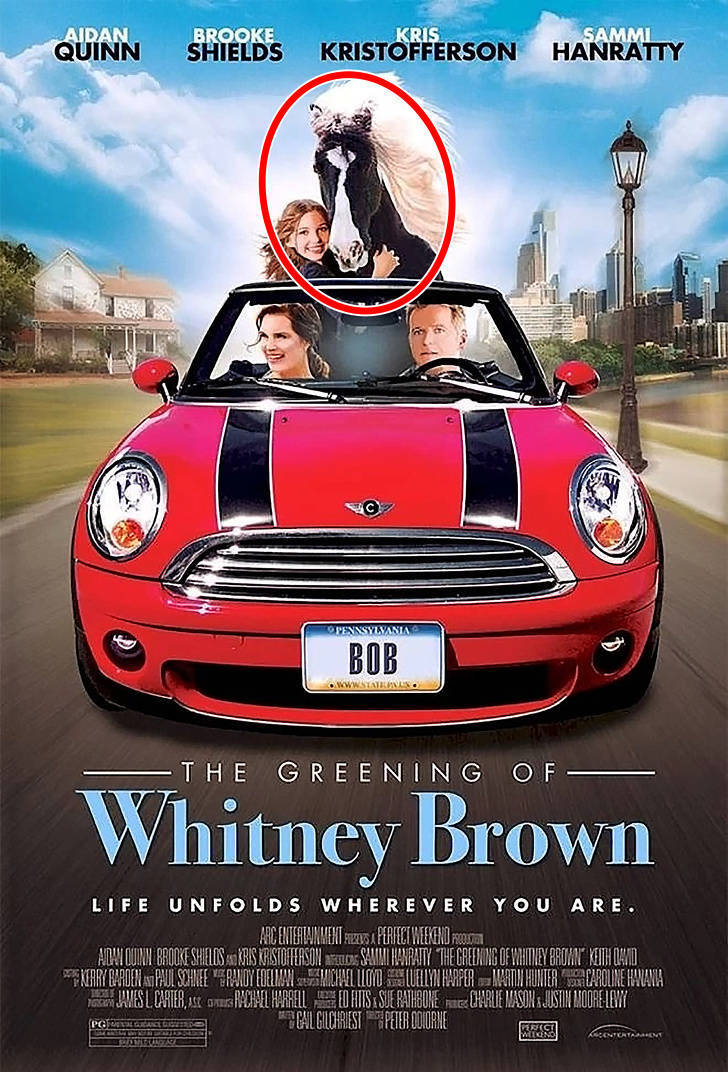 We wish we could’ve seen the face of this designer when he realized it was nearly impossible to put a real horse in the back seat of a Mini Cooper. 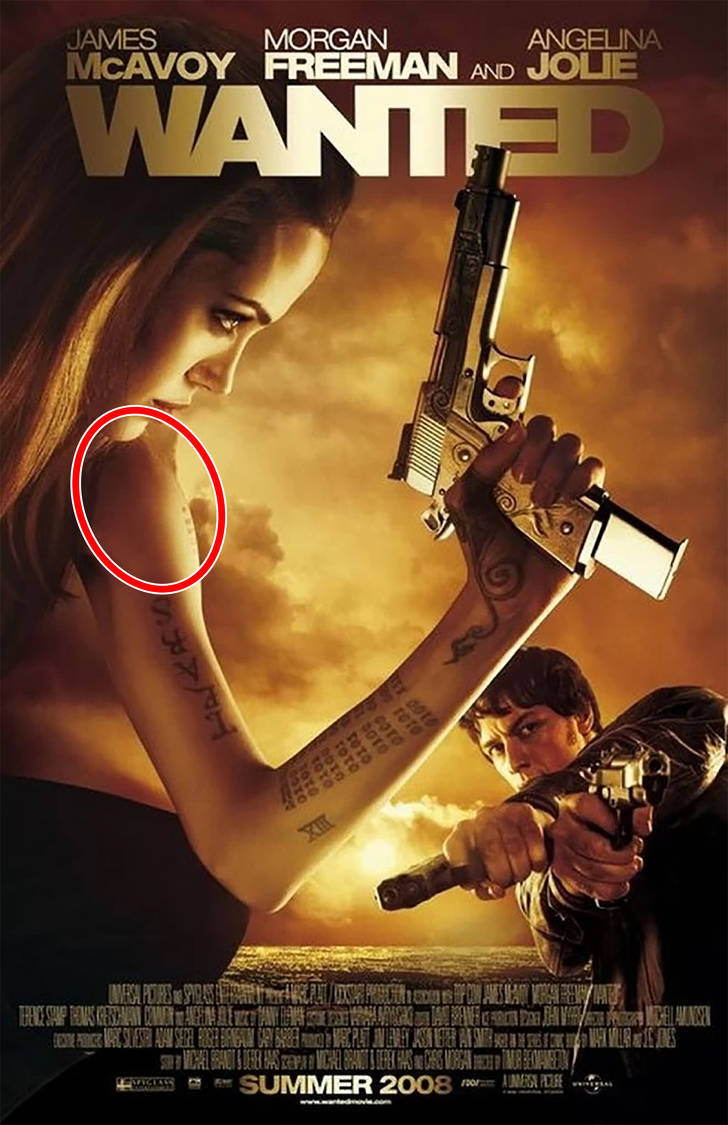 At first sight, the poster looks okay. But if you look closely at Angelina Jolie’s hand, you will see that her shoulder goes right out of her chin and the forearm is too long and unrealistic. 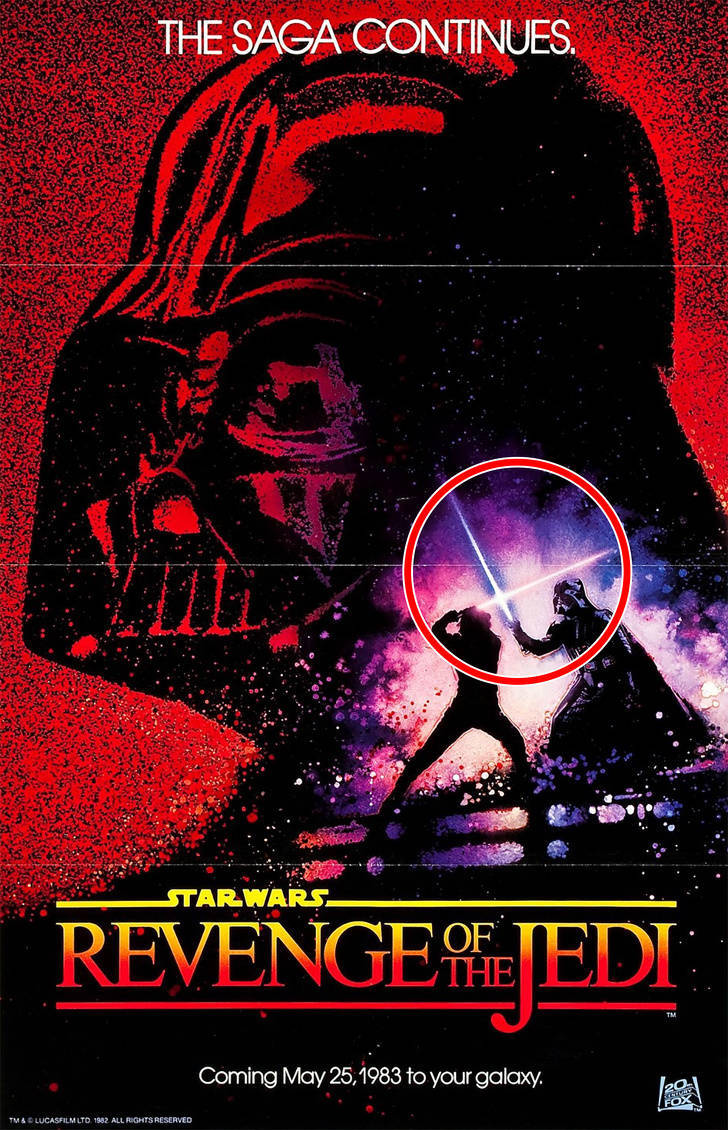 The mistake on this poster is obvious only to a true Star Wars fan. You can see Luke Skywalker and Darth Vader fighting with lightsabers that don’t belong to them. The designer of this poster confused the positions of the weapons and the main characters.

Somehow, the designer here decided that the actress should have 2 right hands. 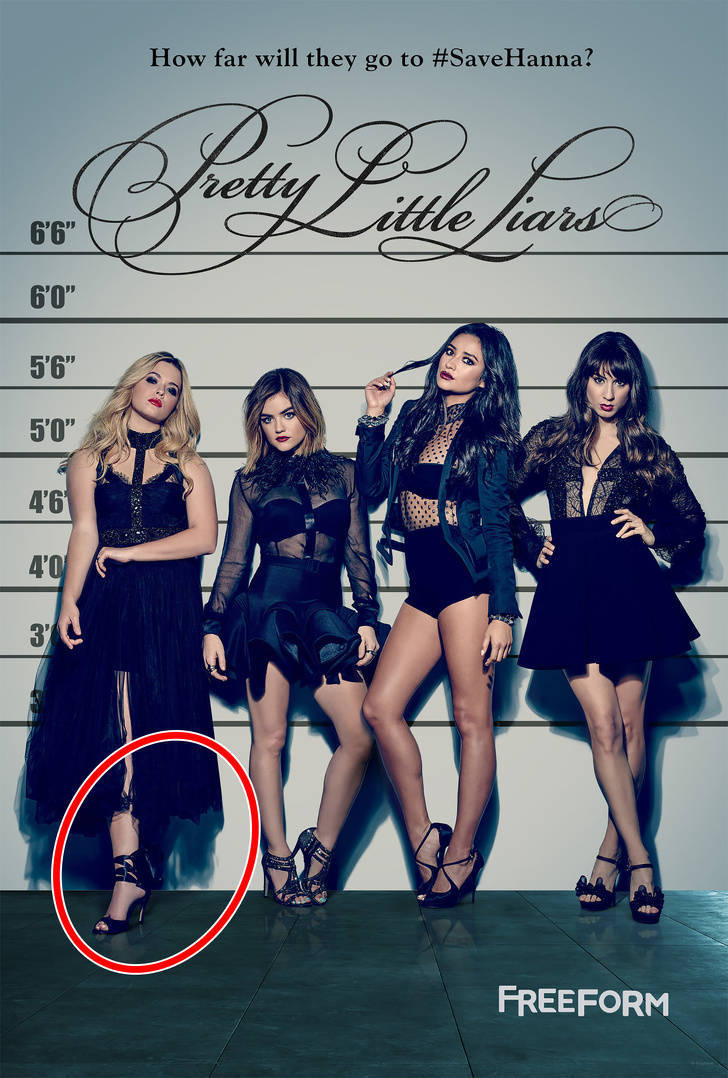 Movie posters aren’t the only things that suffer at the hands of non-attentive designers — posters for popular TV series do too! For example, where did the left leg of the actress on the far left go?

Mission 10 month s ago
#12 looks like a gun was erased from his grip
#16 he could well be using the middle finger on the trigger.
Reply
0

Everyday 9 month s ago
Whomever decided to nit-pick tgese posters keeps commenting on the long forearm thing, but I measured and corrected for dimentional scaling (when something is closer in 3d it IS larger in 2d), and many of them are anotomically correct. Plus the last one with the missing leg... it's behind her other leg dummy, she has her legs crossed like the other ladies, and sometimes the back leg is not visible behind the forefront one.
Reply