“The Twilight Zone” Episodes That Are Still Relevant (11 pics) 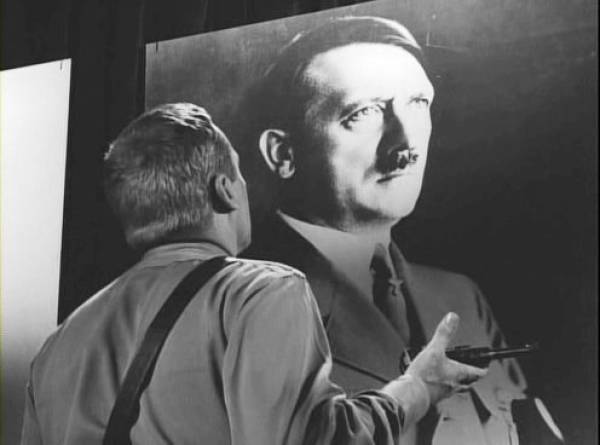 Dennis Hopper stars in this episode, as a second-rate Neo-Nazi who’s trying to bring his fascist movement to fruition in the US. He’s being guided by a shadowy figure, who turns out to be Adolf Hitler, who eventually convinces Hopper’s character to kill.

In his closing monologue, Rod Serling warns that while HItler may be dead, his ideas and the intolerance and cruelty he stood for, haven’t gone away. Bigotry, racism and white supremacy still exist in the world, despite the fact that we know better.

The Monsters are Due on Maple Street 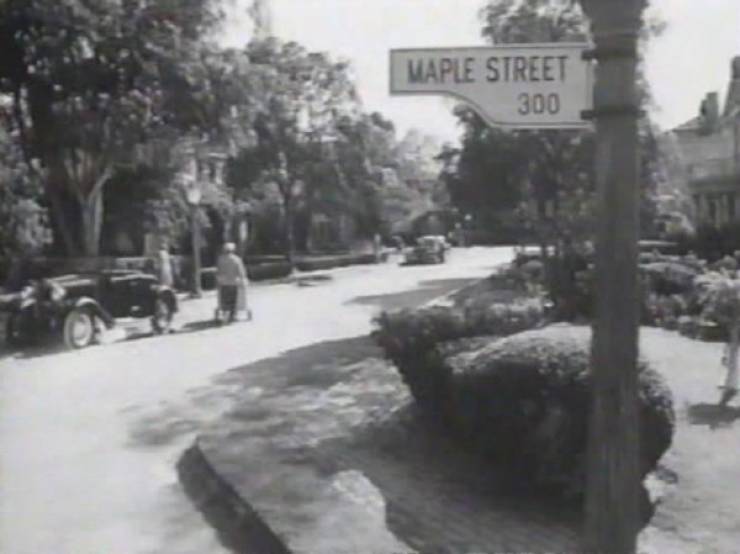 When the electricity and most technology stops working on a quiet street in a generic American town, the residents start to grow suspicious of each other. They believe that there’s been an alien invasion, and they start to accuse each other of various things. The street eventually devolves into an uproar of lawlessness.

The kicker is that the aliens never even made it to the street. They were watching from above and only Maple street was affected. They end the episode commenting that humans tend to find the most dangerous enemy, and it’s usually us.

All they needed was to mess with our sense of order and we started to point fingers and cause our society to break down. It’s pretty familiar.

Eye of the Beholder 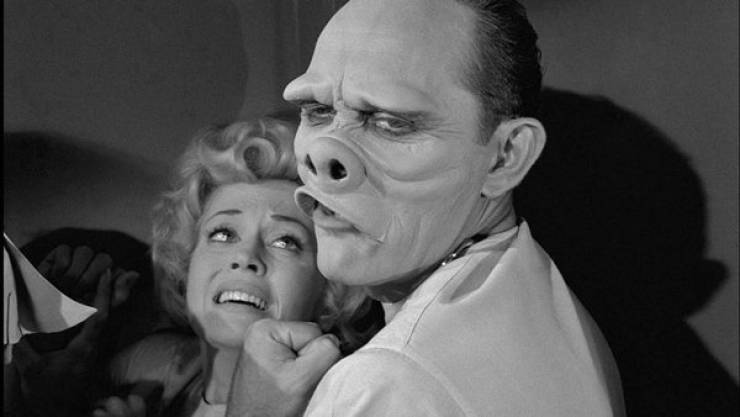 This is easily one of the most famous episodes of the show; a woman goes under the knife to appear normal. Except, she’s already beautiful by our societal standards. She is, however, upset that the surgery didn’t work and she doesn’t look like everybody else. 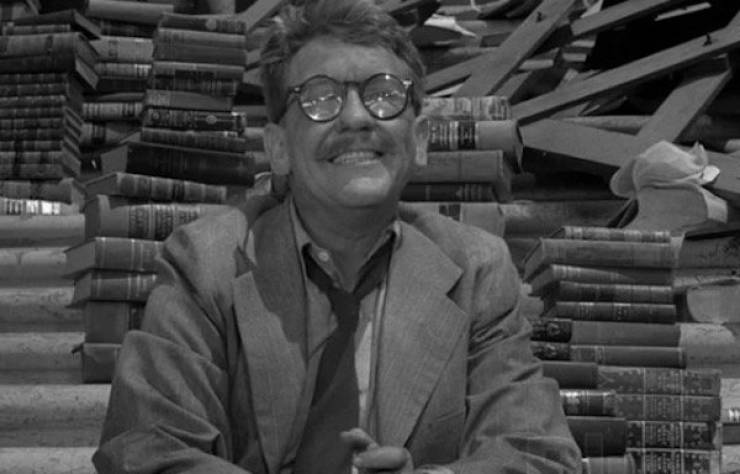 This episode speaks to the binge watcher/reader in me. Burgess Meredith plays a bookworm who takes a lot of shit for his obsession with books. While enjoying his solitary lunch in a bank vault, he unknowingly survives a nuclear blast. Now, it’s just him and a library full of books. At least, until his glasses break and he’s left virtually blind.

To me, this speaks to two lingering contemporary issues. The first is that you might think you have enough time to get to the things you wanna do, but you don’t. And the second is that as much as we hate society and other people, we can’t life without them.

The Brain Centre at Whipple’s 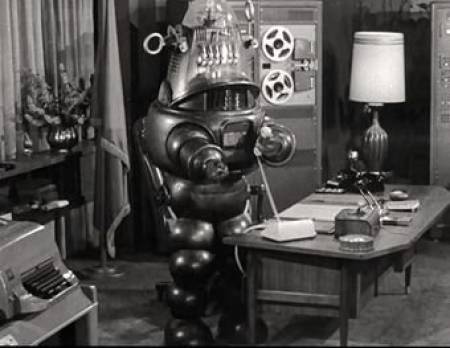 This one is pretty pertinent. We’ve got our evil manager, who’s prided himself on offloading his factory’s workload to robots, and leaving his human workforce without any jobs. But the joke gets turned on him when he’s replaced by a robot.

Between AI, computers, factory robots and the things that Boston Dynamics are working on, this episode is a look into our future. Skynet is coming for us. Someday. This episode is another that looks at the role of beauty in society and conformity. In this tale, everyone undertakes “The Transformation” where they’re made to look perfect. Except, a teenage girl doesn’t want to partake in it, so she’s committed to a hospital and tricked into the procedure. She comes out physically, but also psychologically changed as well.

Makes you wonder how much of their individuality people are willing to sacrifice for social perfection. 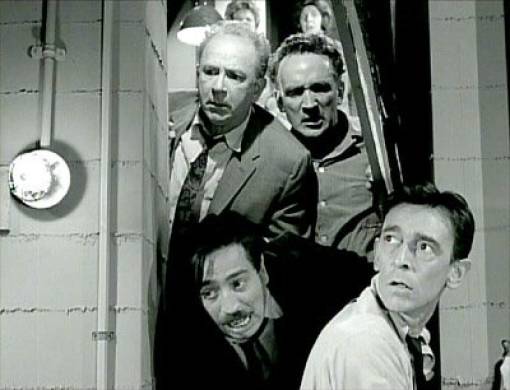 Now, this one hits a little to close to home, in our current climate. This story has a gathering of friends interrupted by the news of a potential alien attack and nuclear fallout. A doctor has a fallout shelter built for his family, and it can only support 3. His neighbours beg to be let in, and eventually build a battering ram to break in. Just as they do, the aliens get identified as satellites and the emergency is called off.

The damage, however, is already done. Relationships were destroyed due to a blind panic. No one realized that in a time of crisis, we should all remain civilized. 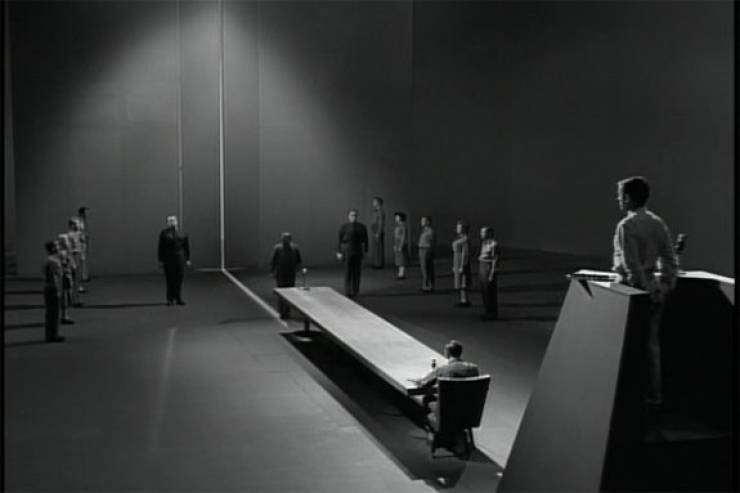 Here, Burgess Meredith is a librarian who is deemed obsolete and sentenced to death for his profession and his belief in God. He’s allowed to chose how he dies, to face his accuser, and if it’s televised. He chooses his method of execution as a bomb, and asks The Chancellor, the man who condemned him, to meet him for an hour. And, he wanted all of this televised. He then locks the door to the room.

After a tense negotiation, The Chancellor panics and invokes the name of God. He’s then released before the bomb explodes, and is deemed obsolete in turn.

The ending narration condemns any state that tramples basic human rights, over the interest of the state/government. 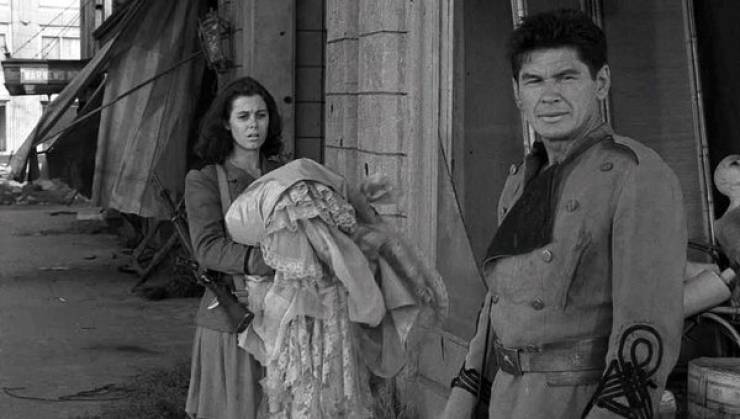 In Two, we meet a female soldier who we assume is Russian, and a male soldier from the opposite side, meeting in a deserted town. They’re initially hostile, but soon change out of their uniforms, realize that there’s no reason to fight anymore, if they’re the only ones left. Then, they leave the town together.

There’s a lesson here to be learned about hating a uniform and their politics, and not caring about the human being underneath. We’re all on the same blue rocket ship, hurtling through the galaxy.

I Am The Night – Color Me Black 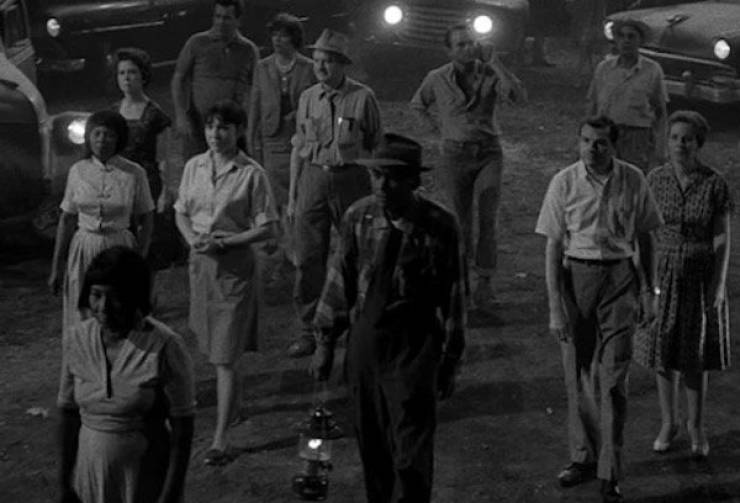 Here, a town is covered in darkness as they prepare to hanged a man accused of killing in self-defence. Everyone is eager to see him die, and when he does, even then, they daylight never comes. A local revered suggests that the towns hatred caused the fog of darkness to appear, and soon, the radio confirms it. The darkness and hatred is consuming the globe. 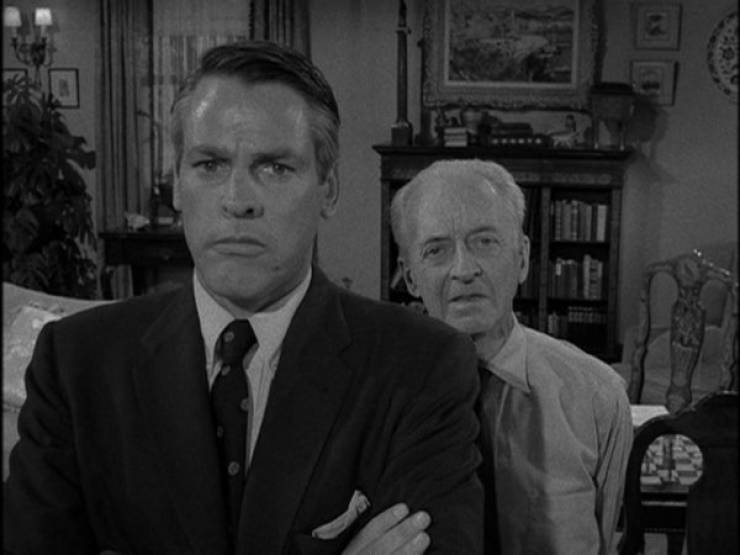 This one is relevant and scary on a different level. The story involves a college history professor who has a knack for making his subject compelling and personal. He knows things that aren’t in history books. It’s soon discovered that he’s immortal, having lived over 2,500 years.

Along the way, however, he’s lived countless lives and groomed thousands of women to become his bride, then left them when they’ve become too old. And after living all those years, he’s never become any wiser. He continuously takes the best years of their lives, for himself and is oblivious to the hurt he causes.

Sounds all too familiar, with all the predatory dudes getting called out in the news.

Bookmark 10 month s ago
One of the best posts Izismile has put up a really long time.
Reply
1

Harmless 10 month s ago
why americans so insecure? in almost every movie or book someone or something always attacks, destroys, kills, invades, abducts or otherwise maul poor yanks... Get real, you are not the center of the universe, neither largest or most significant part of human civilization, to be frank you are parasites who consume more than 50% of planet resources with very questionable if any return for the rest of the world.
Reply
1

Predator 10 month s ago
Harmless; these are morality tales that have little to do with nationality, or whatever politics you're trying to assign to them; and they were made in the 1950's-60's. I've seen plenty of non-american stories with similar themes, so I don't know what you're getting at except wanting to yammer on about something for no good reason.
Reply
-8

ZombieDarwin 10 month s ago
#1 What about black supremacy? Is that okay to fight against, or not? Yellow supremacy? Red supremacy? Brown supremacy? How come we should fight against white supremacy, but not the others? Hmmmmm? You can't tell me that they don't exist, because I've seen examples of each one.

Oh, because this is from Slate.com. Maybe not the biggest group of white haters, but still pretty big. Question asked, question answered.
Reply
-3

Selected 10 month s ago
Harmless, what a stupid comment
Reply
0

Fishermen 10 month s ago
Where but America are people from all over the world doing everything in their power to get here??? There must be one, but for the life of me, I just cannot come up with it!!!
Reply