If You’re Looking For Some Unusual Travel Destinations, Look No Further! (19 pics) 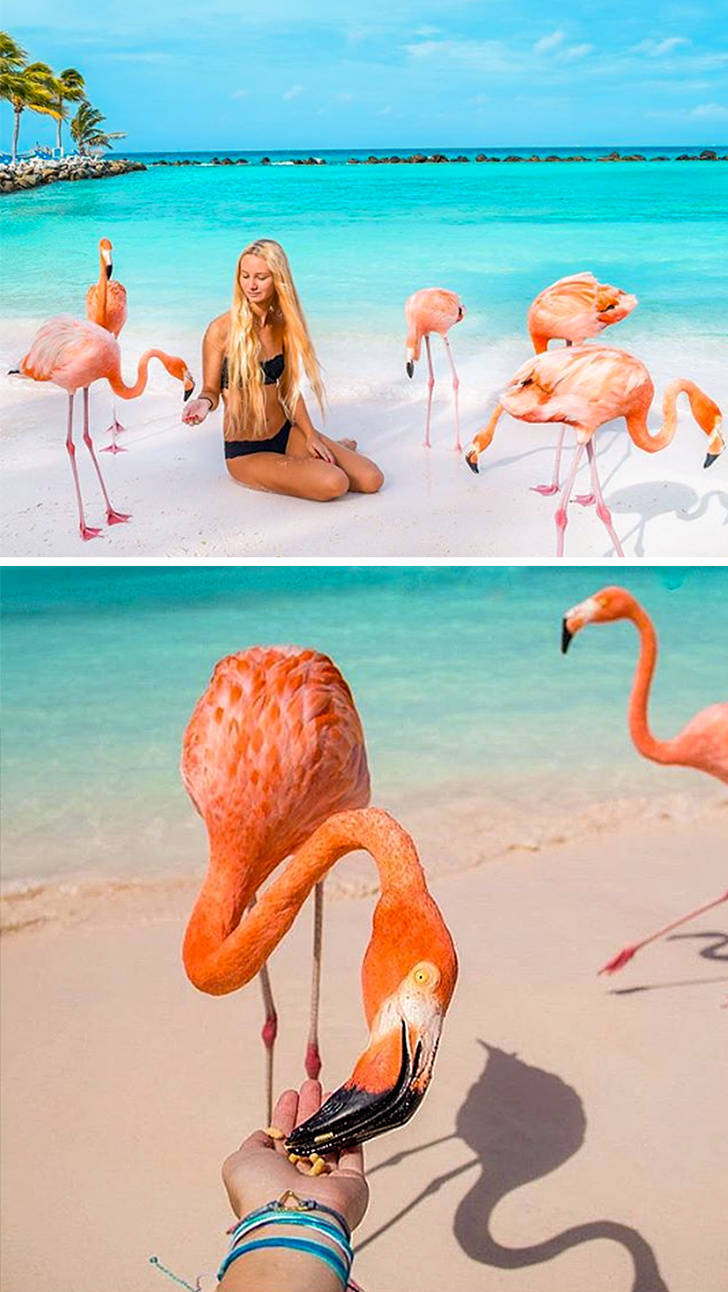 This is paradise — beaches where beautiful flamingos will eat from your hands. They live in Aruba, which is part of the Kingdom of the Netherlands.

By the way, the warmest month in Aruba is September. And the local flamingos don’t migrate here, they live here all year round and they feel quite safe near people, who always give them something tasty to eat. 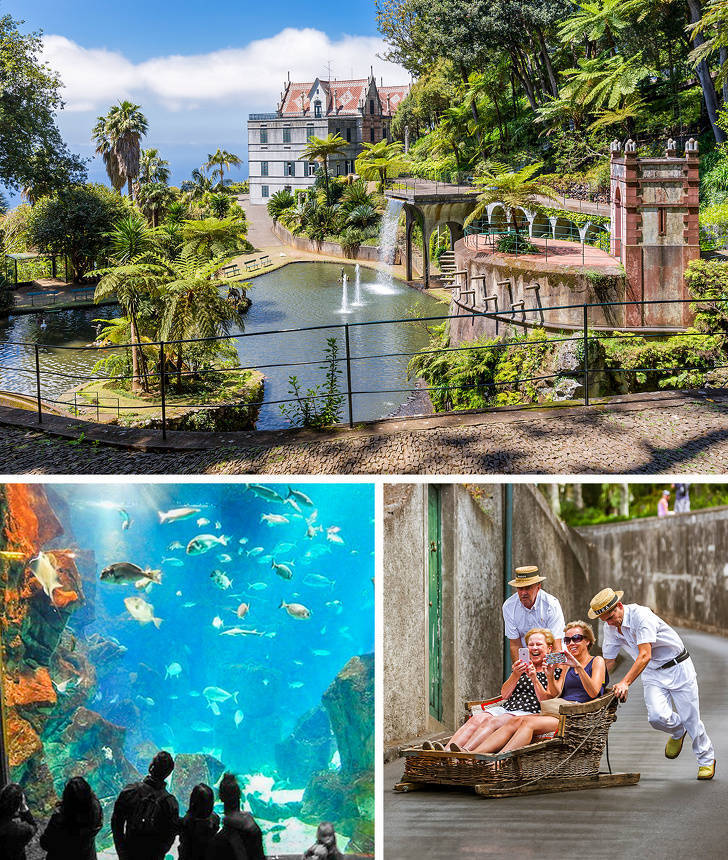 The level of brightness and relaxation in Madeira is through the roof. Yet, every town has its own surprises. For example, in Porto Moniz, there are volcanic pools and an old fort with an aquarium. If you want to find out how the Portuguese lived in the 17th century, you can look at the comfortable houses with triangle roofs in Santana.

And if you take a cable car to Funchal, you can visit the impressive tropical garden of the Monte Palace and slide down a hill in a sleigh. And if you want to see a spectacular view, you have to climb the highest peak of Madeira — Pico Ruivo. 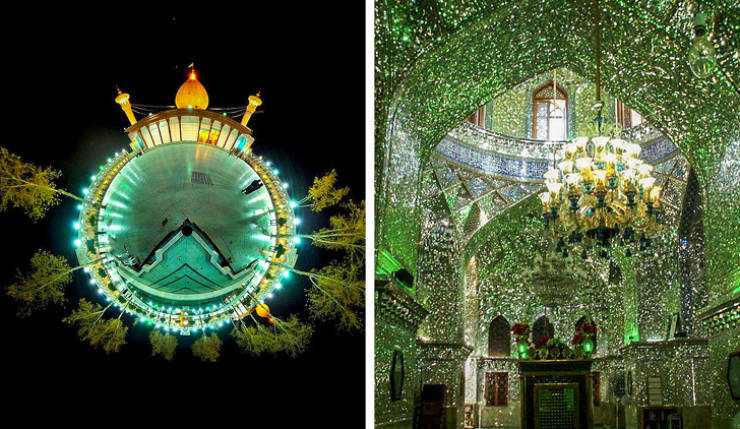 This shiny mausoleum was built in the 14th century during the reign of Queen Tashi Khatun. Shāh-é-Chérāgh is Persian for “King of the Light.” Ayatollah Dastghā’ib continuously saw light from a distance and decided to investigate and find out what the source was. He found that the light was coming from a grave. Inside, there was the body of a warrior in armor with a ring saying “The Pride belongs to God, Ahmad son of Musa.”

Inside the mosque, everything shines with this amazing light. The walls are decorated with a mosaic of mirror glass, ornaments, and silver plates. And there is a pool with fountains and lights at the entrance.

Dune of Pilat in Aquitania, France 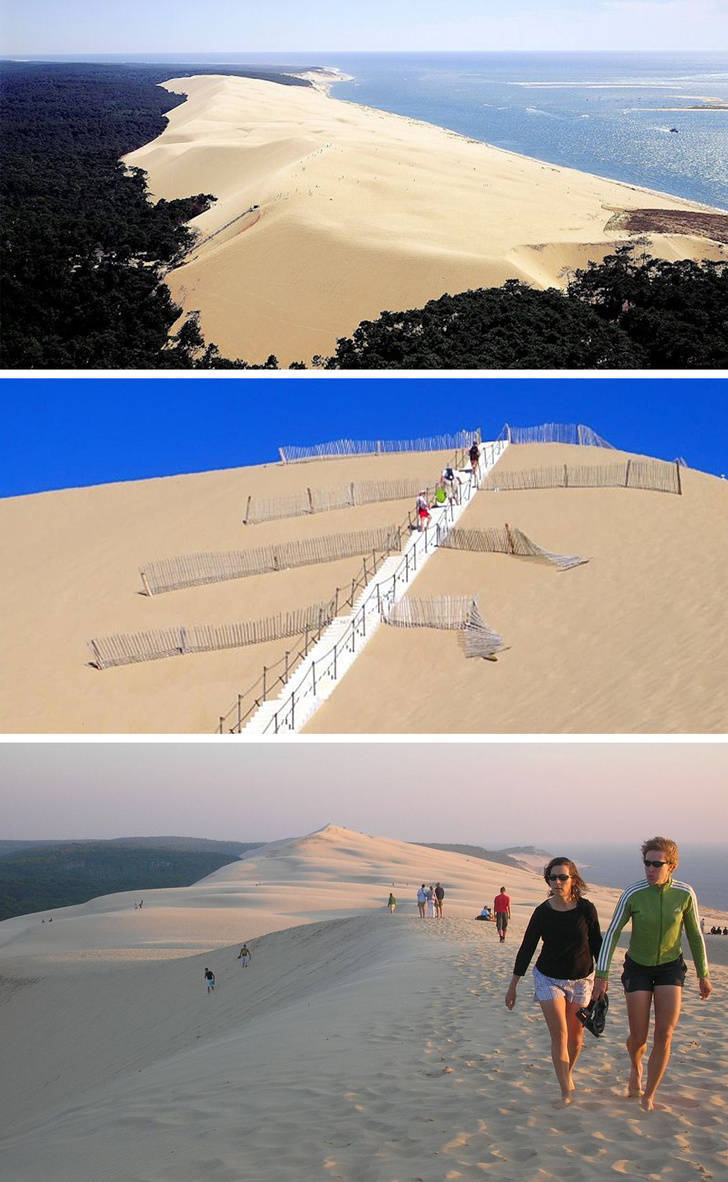 This giant natural masterpiece is Europe’s tallest sand dune. If you ever go to the south-west of France near Arcachon, you can enjoy the sea and be in the desert at the same time. Where did this dune come from? It is said that millions of years ago, the wind and water were eroding the Pyrenees, turning them into sand that the rivers would then take into the sea and the tides would return to the coast that was blocked by forests.

So, inch by inch, the biggest dune in Europe appeared, which is about 2.7km in length from north to south and its height is around 106.60m above sea level. 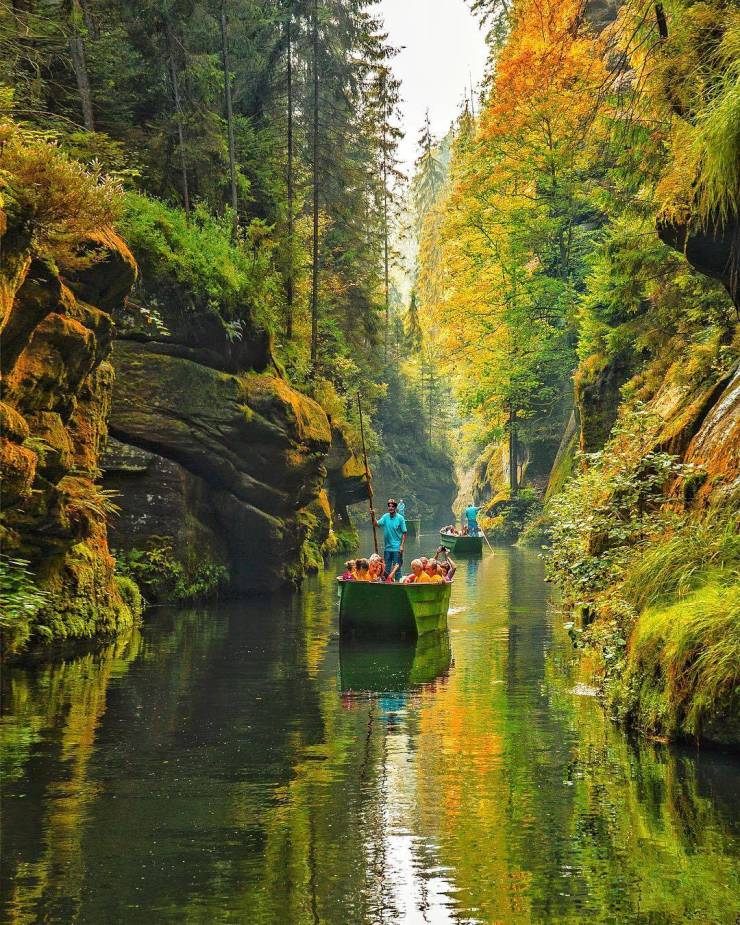 The Bohemian Switzerland National Park is located in the Czech Republic, on the border it shares with Germany. You will enter into a world of cliffs, stone arches with green forests, and transparent water reservoirs. And if you want to see a landscape that looks like it’s straight out of a fairy tale, take a boat to the canyon on Elba. Potbelly Hill was found in 1963, but the excavation didn’t start until 1995. Soon, researchers found other pillars with pictures of hogs, leopards, snakes, bulls, and cranes. Test results showed that this is one of the oldest temple complexes on the planet.

So, Potbelly Hill appeared before the Neolithic Revolution when, according to scientists, people started stockbreeding, agriculture, and writing. Klaus Schmidt, an archaeologist, says that the patterns they found are not just pictures, they are messages from the people of that time. 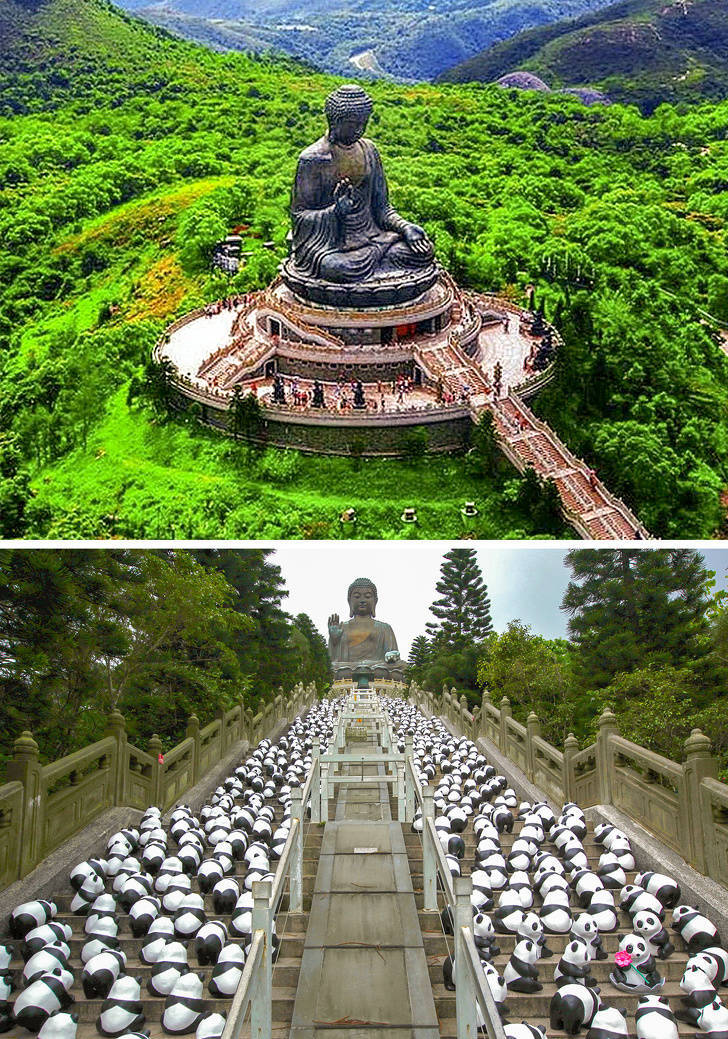 Lantau Island is the greenest place in Hong Kong, with valleys, mountains, and waterfalls. There are also many picturesque trails for walking and riding bicycles, but the most important sight people want to see there is the 112-foot-tall Buddha in Ngong Ping. It is said that this statue is a special symbol of harmony between people, nature, and religion. The view from the top is impressive, and there is a beautiful temple inside.

And also, Lantau has some of the purest beaches where you can walk and swim. 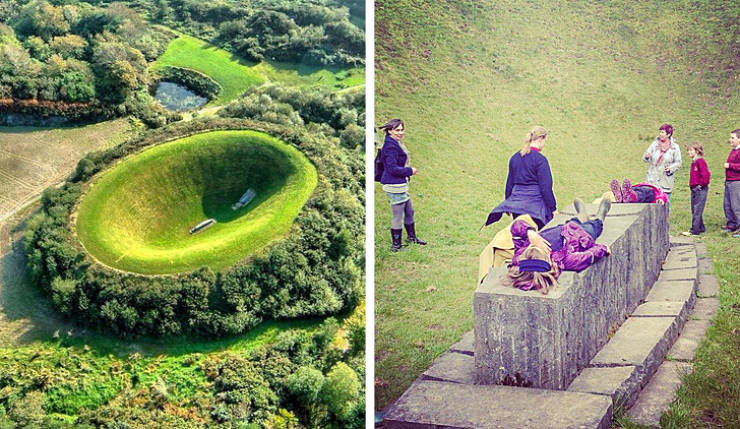 This installation was created by the famous concept artist, James Turrell. You can walk into the center of the crater through a tunnel, the idea is that people walk through a dark tunnel toward the light, as if they are being reborn.

By the way, the crater is located on the Liss Ard Estate in Cork, Ireland, where there are gardens with walking trails and a big lake.

The prince, the ogress, and the mermaid, Thailand 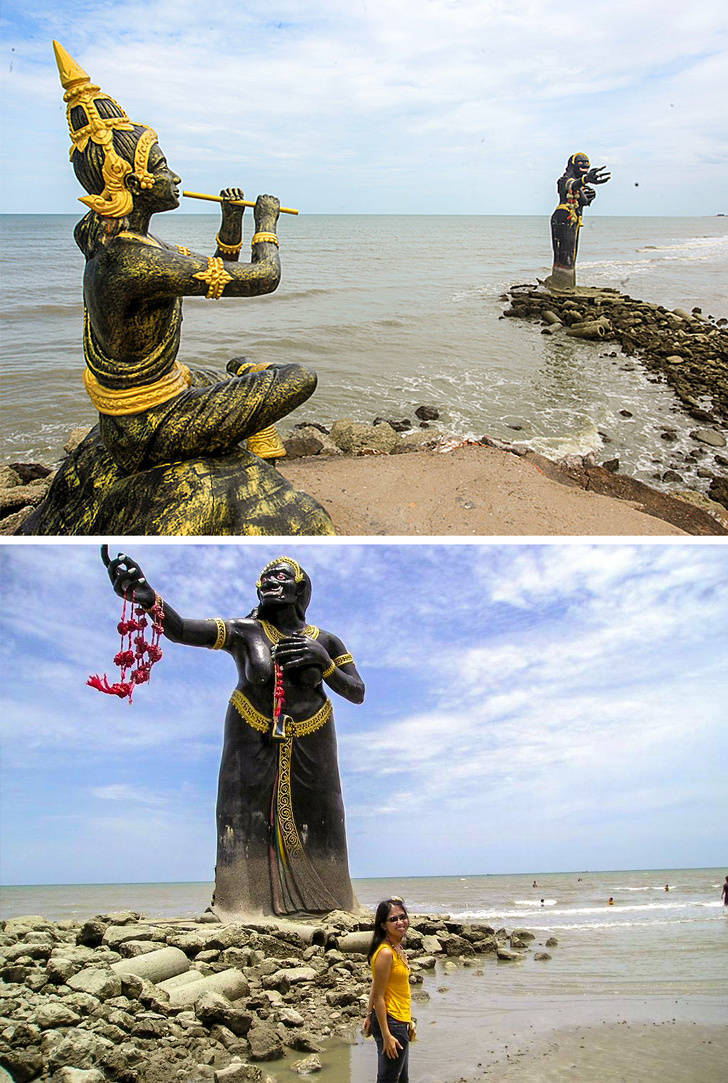 These sculptures on Puek Tian Beach are a reference to the masterpiece epic poem Phra Aphai Mani by Sunthon Phu. Everyone in Thailand knows this legendary poem. It all started when a king sent his sons to study abroad where one of them mastered the martial art of sword fighting and the other one mastered the art playing the magic flute that can put anyone to sleep (or worse). When they returned, the king was angry with both of them for taking up studies in things that didn’t contribute to their skills to take over for him as a ruler, so he expelled both of them from the kingdom. An ogress, disguised as a beautiful maiden, kidnapped one of the princes and they got married and had a son.

Once the prince figured out he was married to an ogress, he escaped with his son with the help of a mermaid family. The woman chased the mermaid and the prince. But then, the prince used the flute to put the ogress to sleep forever, after having a child together, he left the mermaid, and started traveling, meeting new women, getting married, and having new children. Sunthon Phu spent more than 20 years writing this poem about these events, finishing it in 1844. 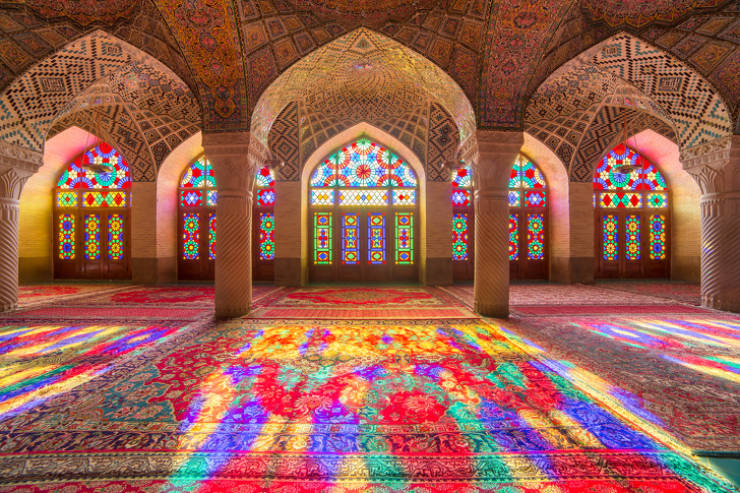 The stained glass of the Nasir-ol-molk Mosque takes us back into a fairytale, having been built during the Qajar dynasty.

It is often called the Pink Mosque because there are so many roses that cover the ceiling and the walls. 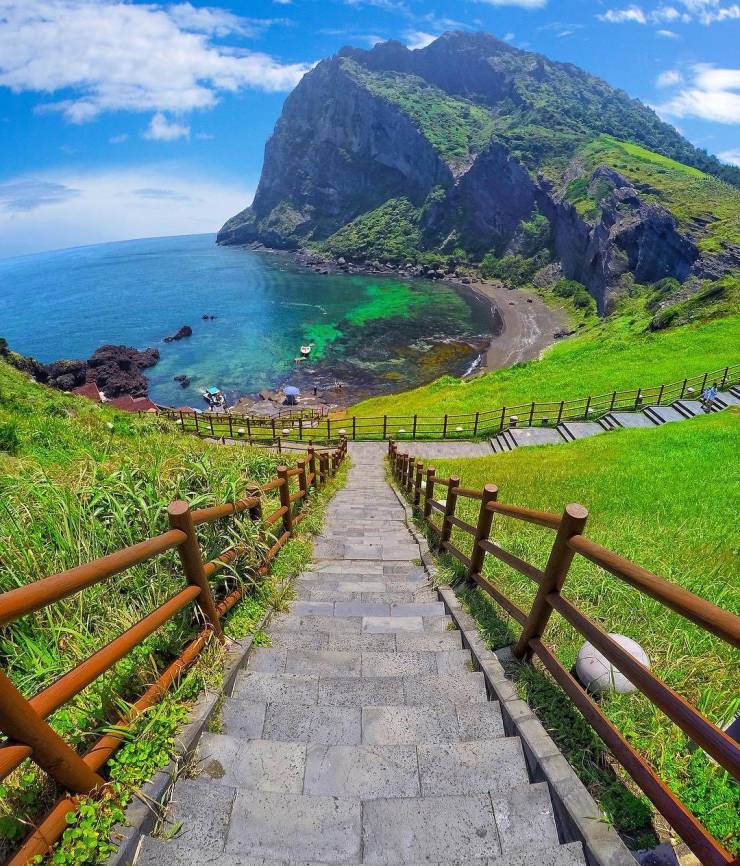 This dormant volcano is one of the most important natural sights in South Korea and you can see it from any point on the island. The last eruption happened in 1007. The territory around it is a national park with spectacular views. 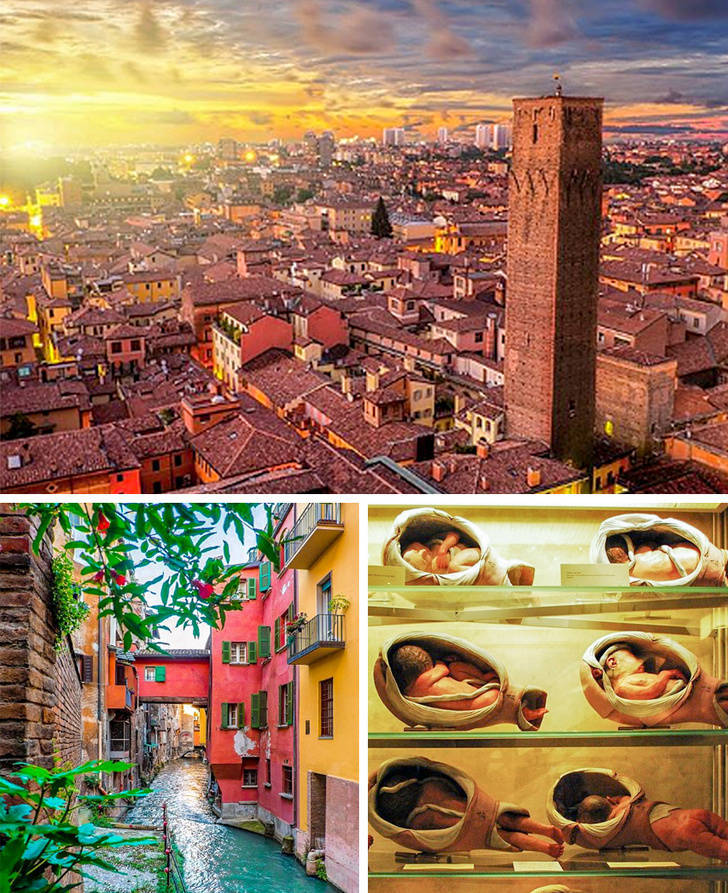 Bologna offers a lot of different kinds of experiences. It is the capital of science and cooking. You can find a romantic canal on expected places, the 13th or 14th largest European church San Petronio Basilica, the museum of toy soldiers Museo Nazionale Del Soldatino Mario Massaccesi, and also the obstetrics school in Palazzo Poggi where you can find wax figures showing the process of birth, in detail.

And of course, the biggest sight in Bologna is the oldest university in Europe (it was opened in 1088) where Nicolaus Copernicus studied.

Hotel in wine barrels, the Netherlands 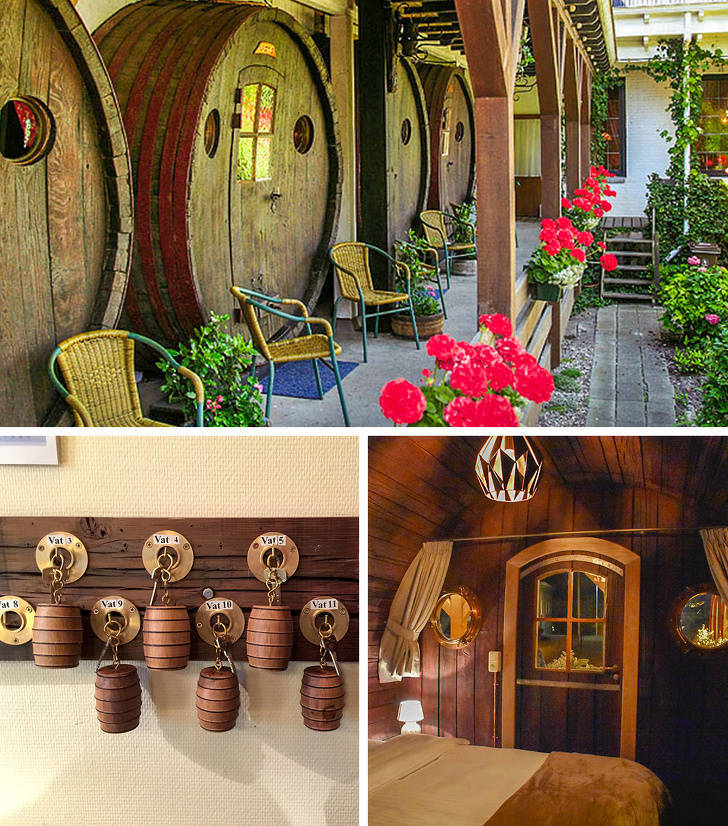 If you’ve ever wanted to feel like an Ancient Greek philosopher or you just love wine barrels, this is the right place for you. 12 huge barrels were brought here and turned into comfortable rooms with a view of the harbor and garden.

The pools in the Hearst Castle, California, US 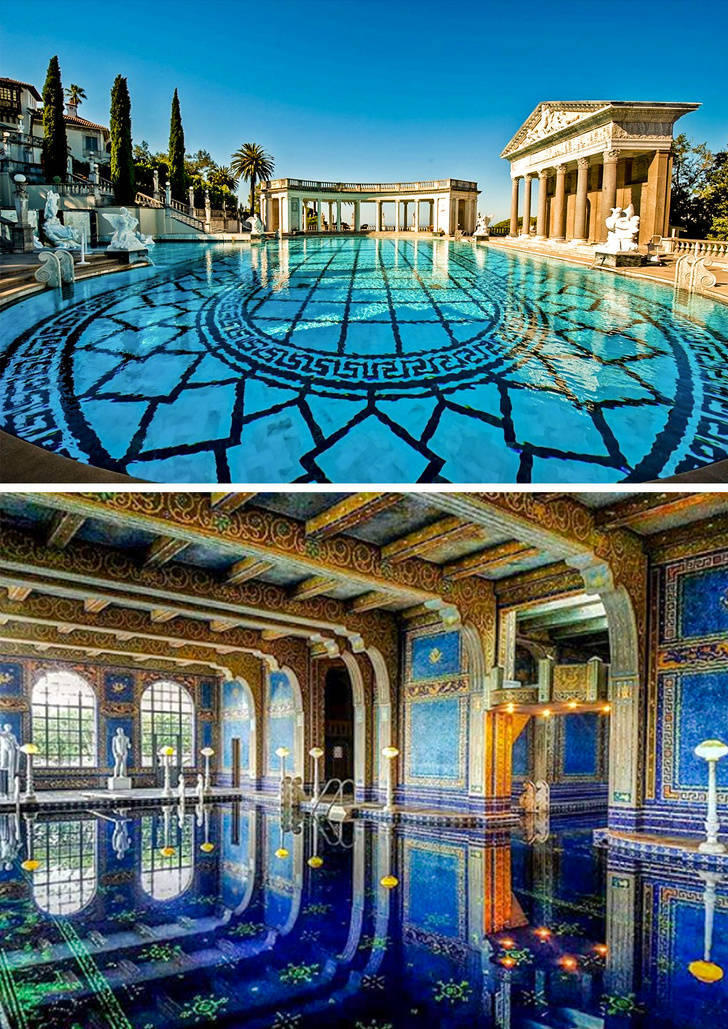 This amazing castle in California was built by William Randolph Hearst, an American newspaper publisher from the 20th century. He owned several beautiful libraries, an exotic zoo, guest houses, stables for Arabian stallions, a wine cellar, a medieval-style banquet hall, a runway for planes, and 2 pools.

The open pool was called Neptune, and the closed one looks like Ancient Roman thermal baths.

The set of the comedy film Popeye with Robin Williams, Malta 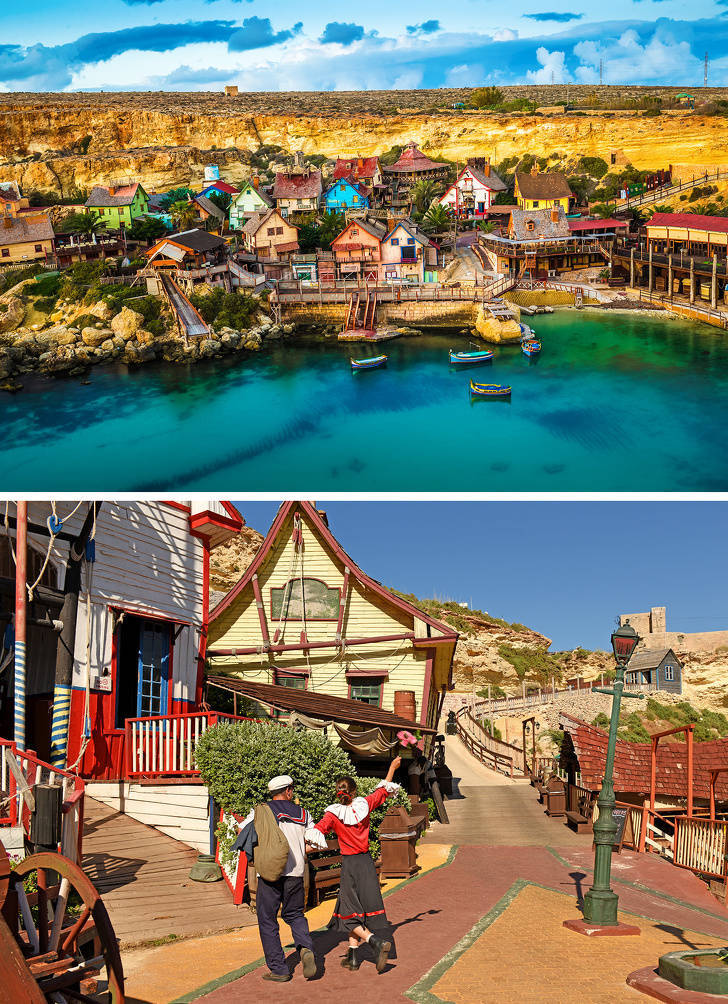 More than 20 wooden constructions were built in Mellieħa, using logs from the Netherlands covered with tiles from Canada for shooting the film. When the movie was finished, the local people decided to use this as their chance and turned the set into a theme park. Then, they found funny actors, so the Popeye village would come to life. 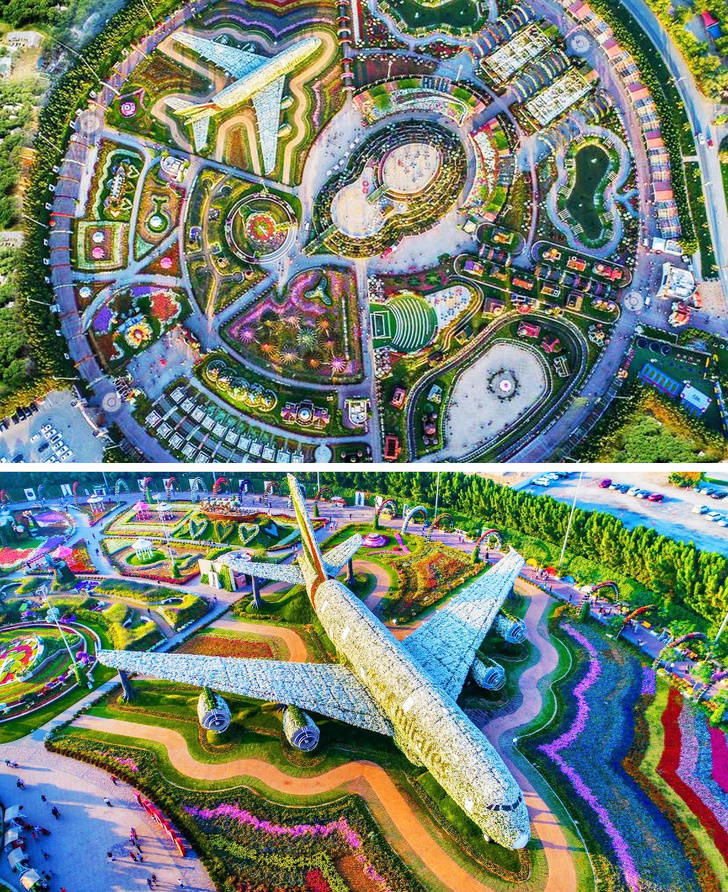 This might sound crazy, but the biggest flower park on Earth was created in an infertile desert. They were able to grow plants that never existed in the United Arab Emirates before. Special systems constructed for drip irrigation support the bright colors of the park.

Another interesting fact that makes this place even more romantic is that it was first opened on Valentine’s Day. 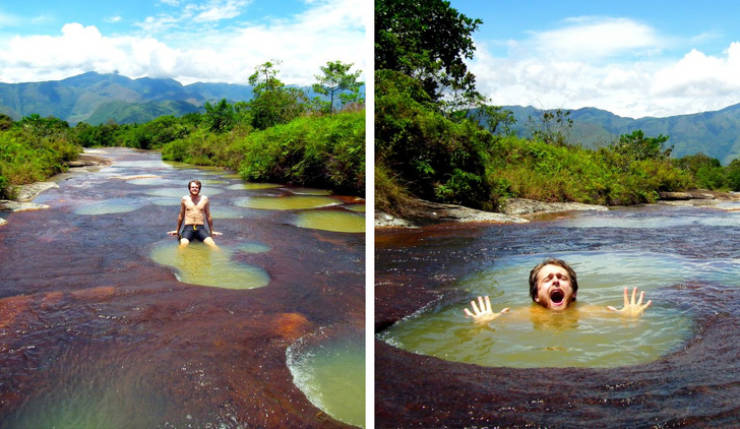 The Caño Cristales River is a natural masterpiece. This “Crystal River” is famous for its amazing diversity of colors thanks to the different kinds of seaweed that grow there. It is also called the river of 5 colors. It also contains some incredible natural “Jacuzzis” — deep open holes where you can relax after a long walk. 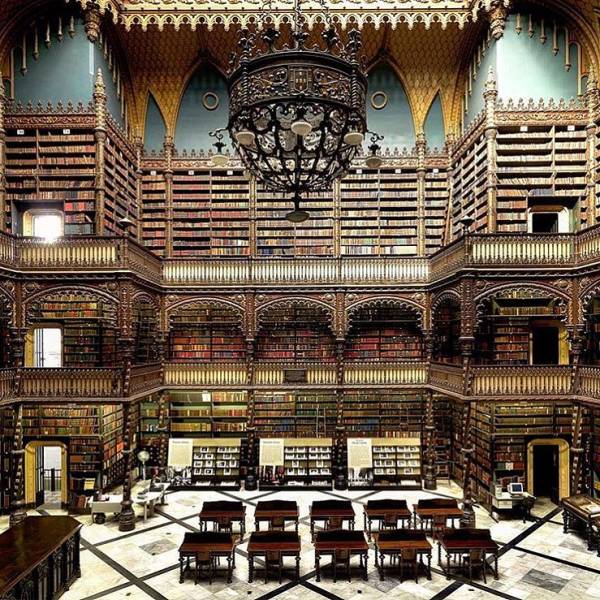 The Portuguese library in Rio de Janeiro was established in 1810. The interior of the hall was made in a mix between art nouveau and neoclassical style and the book collection takes up 3 floors. The full collection includes more than 9 million items. 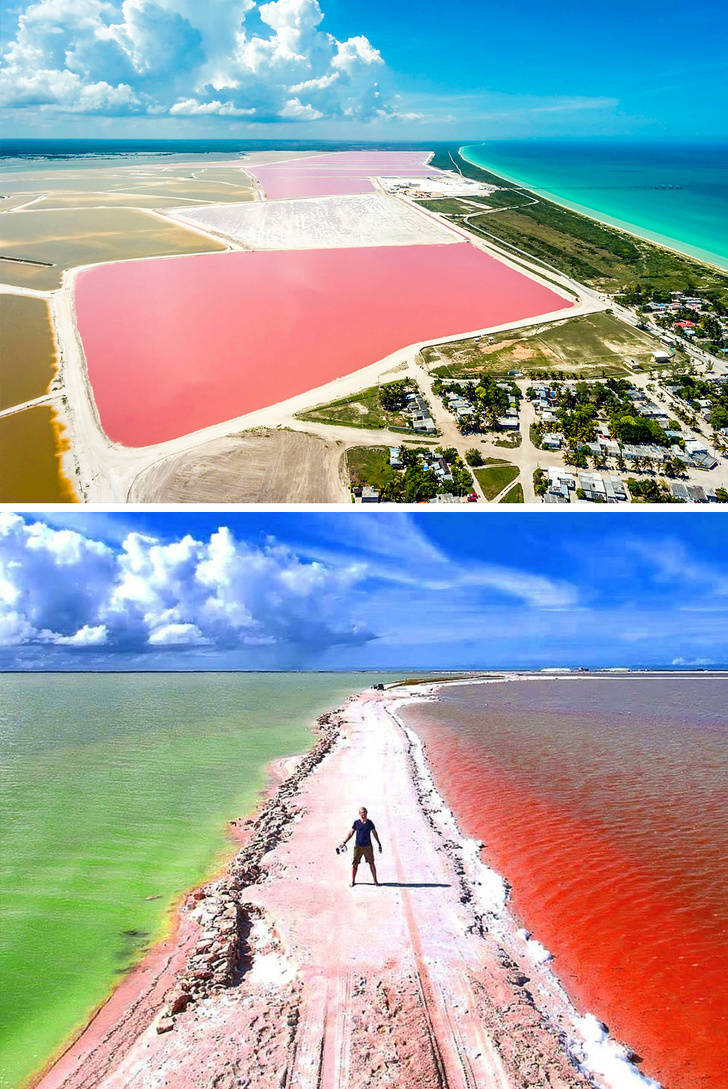 The view of the fishermen village, Las Coloradas, on Mexico’s Yucatan peninsula is fascinating. The azure waters of the gulf and the Rio Lagartos Lagunas combined with the pink lake and the contrast of the salt mining sites look like a bright patchwork quilt. The reason why this lake has these colors is that there are red plankton and Brine shrimp that create these special pigments.

This region near the laguna was also designated as the Ría Lagartos Biosphere Reserve by UNESCO in 2004 since there are many different birds here, including flamingos. 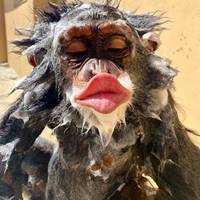