“My mother told my father no three times. On the third time he got wasted at a local bar and basically started pouring his heart out to any one who’d listen. Mind you, it’s a very small village in the Italian alps and my father barely spoke Italian and no one in the village spoke English, including my mother. Word got back to my mom about this sad American at the bar so she went to find him and she told him she’d marry him.

‘My mum actually said no to my dad’s proposal when they were younger. Not because they weren’t in love, but because she wasn’t sure if it was something she actually wanted to do, rather than something that society expected of her or whatever…

They still stayed together and had kids (hence why you’re reading this now!). And then when my dad was terminally ill a few years ago my mum plucked up the courage and asked him.

Just to get her back after all those years he said no- before taking her up on the offer a few days later.

He died a happy man.”

“We met in her home country of Germany while I was traveling. I knew I was in love. We dated long distance for a while. Me flying to Europe. Her flying to the US. I suggested marriage so we could be together. She said no a few times. I didn’t press. But I was patient and not being pushy. I knew she was worth the wait. Then it hit her that’s how we could be together. If we got married, we could live in a country together. The difficulties of being born on a different patch of dirt. A few years later, I’m still married to my best friend and living with her in Germany. Not all no’s stay no. Life goes on.”

“My dad proposed to a woman who said no. My dad was a violent alcoholic and she said she couldn’t be with him unless he got clean. Took him a little while, but he did it. He wound up meeting my mom through a match maker and they’ve been married 25 years.

If that woman never said no to him, he never would have gotten clean. It was the lowest point in his life. But it all brought him to my mom who makes him happier than ever.”

“We lived together for another six years until she changed her mind and told me that I should ask again. We were engaged for over a year and got married in 1991. We are still married, have three children, and are both still very much in love.”

‘I asked her right out of high school, but she wasn’t ready. We stayed together, went to college at the same school, spent the first year in separate dorms, then moved in together. Got married a few years later. Our 20th is coming up.”

“I spoke to her about it beforehand, and she seemed really Keen on the idea. So I decided to propose about a week after in front of all our friends she was so shocked she picked me up off my knee and shoed me away. Most of our friends were confused, because everyone knew it was going to happen, and she said she was excited for it.

She said yes after apologizing profusely and just this year we celebrated our 9th anniversary.”

“My mother turned my father down, but didn’t outright break up with him. She just wasn’t sure about the marriage idea; she valued her independence and was nervous about commitment.

No hard feelings, though. He called up the next day when she’d had more time to think about it, and she said yes after all.

“We’d been dating for a year and a half, and I was due to move out on orders (was in the Army). She suggests we get married, I said no way…I was going off to school (Army-type) for six months, then a year on a deployment to the Middle East…it just wouldn’t work.

She was calm, and then said “You think I’ll be a burden to all of that, but I’ll actually be a help”. While just seconds earlier all I could think of was what a pain in the ass it would be to get married and leave, and now it (for whatever reason) seemed perfectly reasonable that she was right. We got married a week later at the courthouse. I was 22.

Last month we had a nice socially-distant dinner party for our 29th anniversary with our two amazing kids and a few friends.

“She had said she wasn’t really a fan of marriage, so I thought proposing non-marriage might be well received, and I wanted us to be together for the rest of our lives. So I asked her not to marry me.

She said no. We have been married for 10 years.”

“I was the person who said no.

We had only known each other for 3 months and he was smitten, I was more cautious. I said no, I like you but it’s way too soon. He asked when would be enough time, I said maybe a year.

He proposed again at midnight, one year after we first met, I said yes and we have been together 8 years now. I know a year was still not a long time, but we had a long engagement and didn’t get married for another 2.5 years.”

“My Mum and Dad had been dating for a few months when my Mum proposed to my Dad. He said no, not until he gets a proper job and can provide. A month later, he’d secured a job. They celebrated 32 years of marriage last month!”

“I asked a woman after almost 6 years together. She said no, and added that maybe it was time for us to go our separate ways. Wow. Shock. But life has to go on. About a year later I met a different girl and we were engaged within a year. We were both ready for marriage. That was 16 years ago. We’ve got three terrific kids, two boys that are exceptional athletes and a girl whose a brainy little nerd. “

“We were living together. I asked, she said “No, I love you but I need to think about it. I don’t think I’m ready yet. Can you give me some time and ask later?”. A few months go by, I ask again, same response. A few more months, same deal. A couple more weeks and then she says “hey, what do you think of us getting married?”. I replied: That’s an excellent idea, why didn’t I think of that?

Our 39th anniversary is next month.”

“We continued to date for a few more years, I proposed again, and she said yes that time. We now have 2 children and have been a couple for 11 years :)” 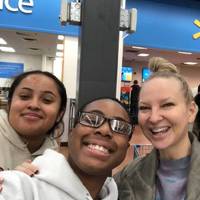 Chauncey 1 month ago
Ours was the opposite. We met (through a blind date) and married 2 months later. She passed away, too young, after 33 years together.
Reply