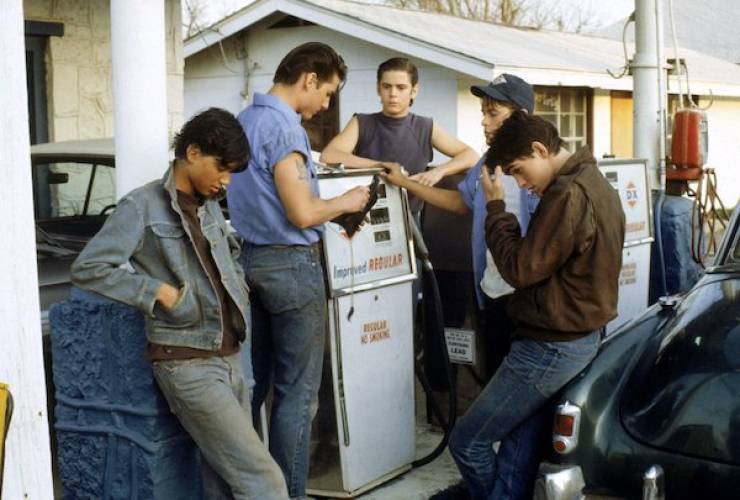 S.E. Hinton is the author of the 1965 novel upon which the movie is based. During filming, she spent much of her time on set working closely with the actors and became known as the “Greasers den mother.”

Since most of the actors were teenage boys staying in a hotel without adult supervision, there was a lot of chaos that went on off-set. Actor Leif Garrett described the debauchery as “mini-rumbles.”

During filming, all of the actors stayed at Tulsa Excelsior. Those who played the Socs had nice rooms with views on the 18th floor, while those who played Greasers stayed closer to the ground floor in order to create distance between the groups. The Socs were also given leather bound scripts while the Greasers were given ratty paper ones. 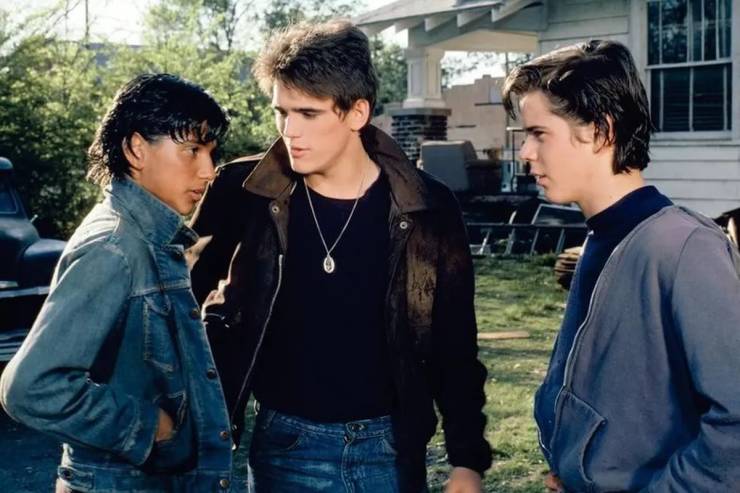 Director Francis Ford Coppola wanted to shoot many more of the scenes found in S.E. Hinton’s novel. However, pressure from the studio meant scenes had to be cut but a DVD version called “The Complete Novel” was released that is 22 minutes longer. 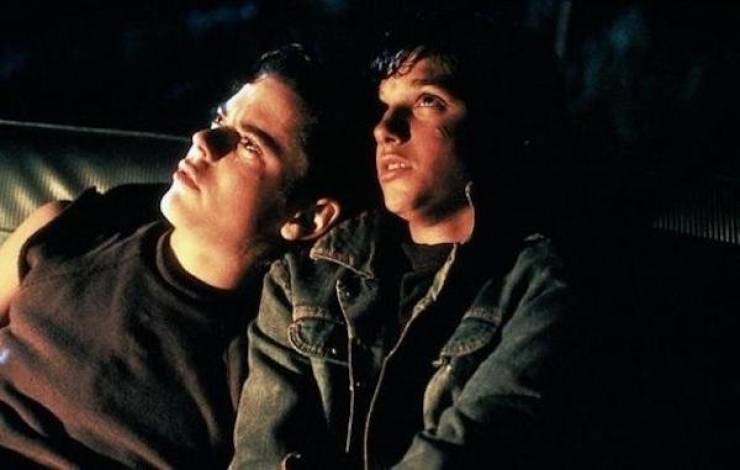 Francis Ford Coppola had never heard of The Outsiders until a middle school class in California read the book and petitioned him to make a movie out of it. The book is still read in classrooms across the country almost 50 years later.

The director wanted the actors to be familiar with the house that was used for filming, so C. Thomas Howell, Patrick Swayze and Rob Lowe all spent a night in the house together in character and even cooked a meal.

This was a breakthrough film for many of the actors. Ralph Macchio’s next movie would be The Karate Kid while Tom Cruise would then go on to do Risky Business right after filming ended. 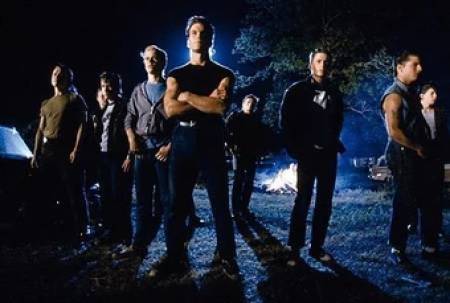 During the big rumble scene, a stunt double slipped and actually punched C. Thomas Howell in the face. Instead of the big scene he prepared for, Matt Dillon ended up dragging him off to the side. 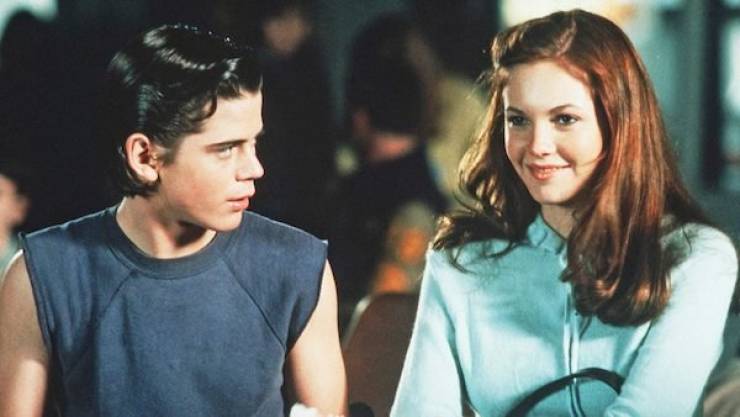 The drive-in scene was filmed at around 3 a.m. when it was near freezing outside. C. Thomas Howell wasn’t allowed to wear a jacket and had to stay in Ponyboy’s sleeveless shirt the whole time.

When Dally falls out of his chair at the movies, it was a complete accident. You can see C. Thomas Howell laugh briefly. 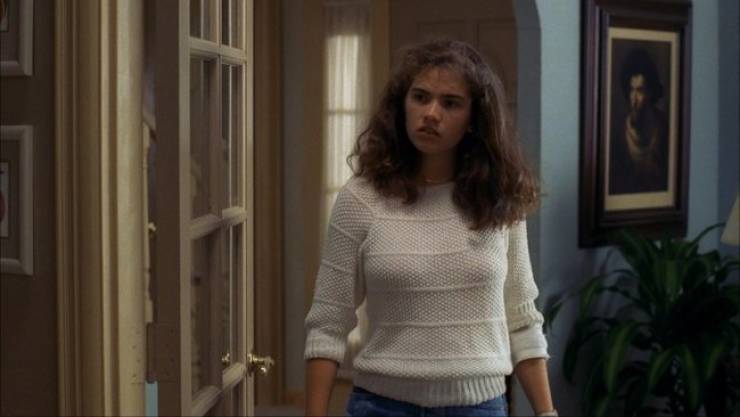 A Tulsa teenager working as a copy clerk saw an ad for extras on The Outsiders set and shot several scenes that ended up being cut. This was Heather Langenkamp, who became the star of the Nightmare on Elm Street series. 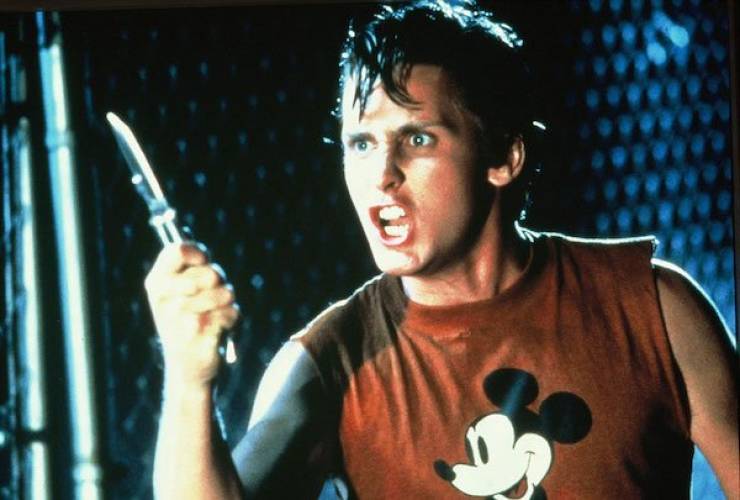 After filming the fountain scene, six of the boys decided to reenact the scene in their hotel’s fountain that night. The hotel removed the fountain just a few weeks after the incident. 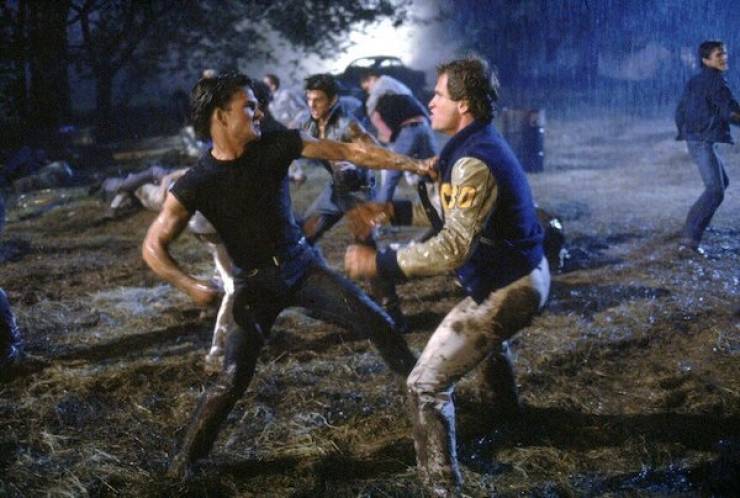 The actors who played the Greasers and the Socs had lots of competitions off camera, including flag-football games. 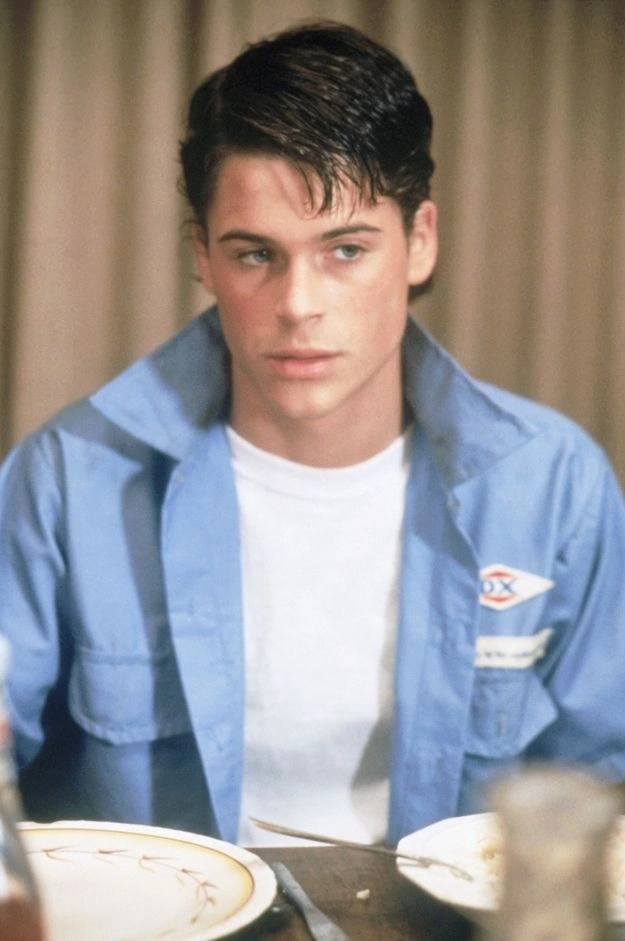 Tom Cruise auditioned for the roles of Sodapop Curtis, Darrel Curtis, Randy Anderson, and Dally Winston before he was cast as Steve Randle. 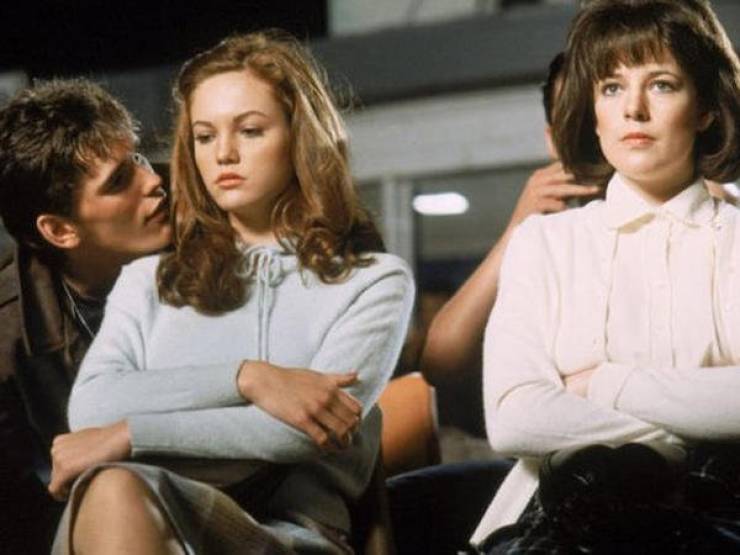 The scene when Dally harasses Cherry was shot early on during filming and got the two off on the wrong foot. Diane Lane later blamed it on her “adolescent insecurities” and the two are on good terms now.

Author S.E. Hilton wrote The Outsiders at age 15 and finished it at just 16 years old.

On the way to the rumble, Tom Cruise actually does a backflip off of the car. Patrick Swayze coached him on the stunt but right before filming he told author S.E. Hinton that he was nervous and ate too much at lunch. She had him drink raw eggs until he threw up and then did the scene. 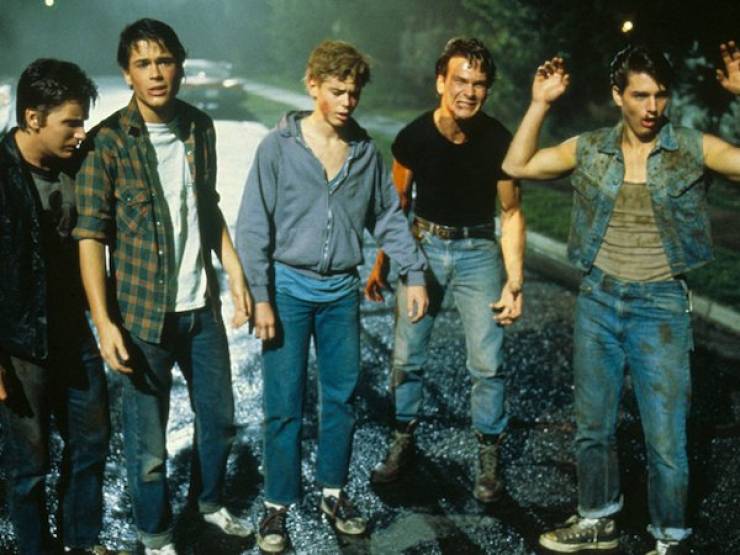 Also during the rumble scene, Tom Cruise accidentally got punched in the jaw and needed dental work the following day. 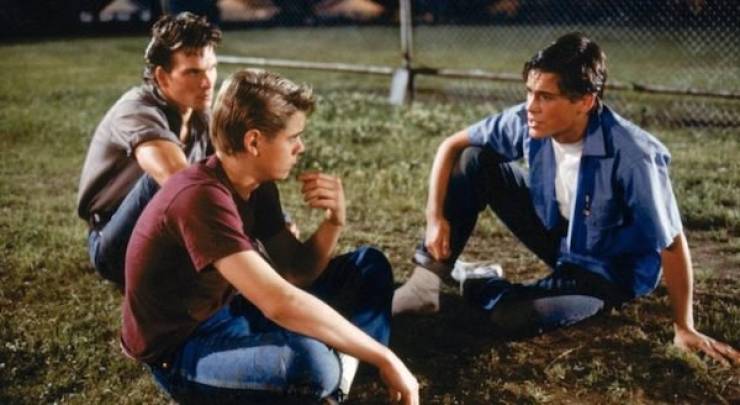 Rob Lowe turned eighteen while filming. The other young actors played pranks on him all day, including saran wrapping his toilet and filling his hotel room with fire extinguisher foam. 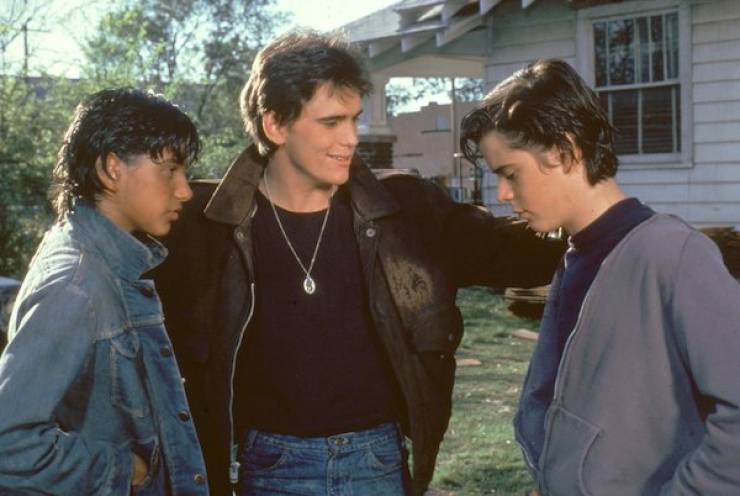 Nicolas Cage auditioned for the roles of Darrel and Dallas. He did some method acting and locked himself in a room for two weeks while he drank beer and stared at a picture of Charles Bronson. Francis Ford Coppola turned him down but said he should audition for the part of Two-Bit. Cage was fed up and chose to walk away completely.

Almost all of the actors were in their teens during filming, except Ralph Macchio and Leif Garrett, who were both 20 years old at the time. The oldest was Patrick Swayze, who was 29 then. 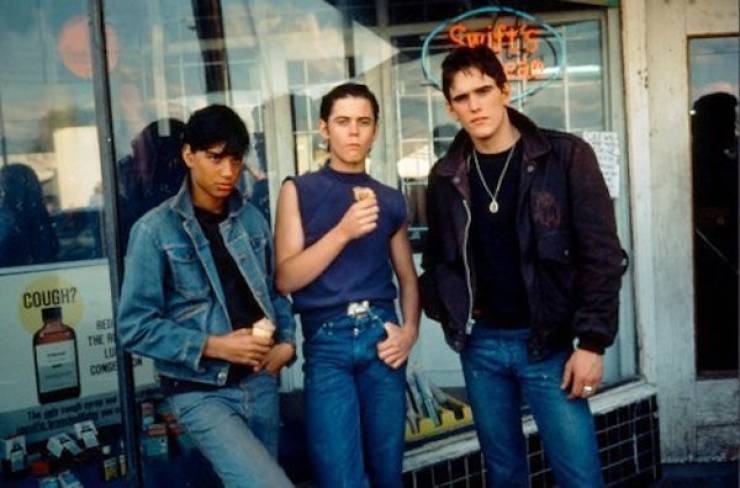 In a 2016 interview author S.E. Hinton said:
“I have so many incredible memories of that time, it was just magical to see everything come together, and we had had a lot of fun (probably too much) on-set with the boys, many who were just getting their acting careers started, and yes, I am in contact with all of the actors and Francis Ford Coppola.” 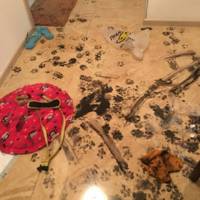 Marv 1 year ago
I loved this book as a child.
Reply