These Characters Were Meant To Be Played By Other People! (15 PICS)

Filmmakers initially wanted Rachel McAdams to play Andy. They wanted the main role to be portrayed by a popular and famous actress. The star of The Notebook and Mean Girls had an advantage over Hathaway, who at that moment was only famous for family movies like The Princess Diaries and Ella Enchanted. However, after McAdams turned down the offer several times, explaining that she wanted to stay away from mainstream roles for a bit, the role finally went to Anne. 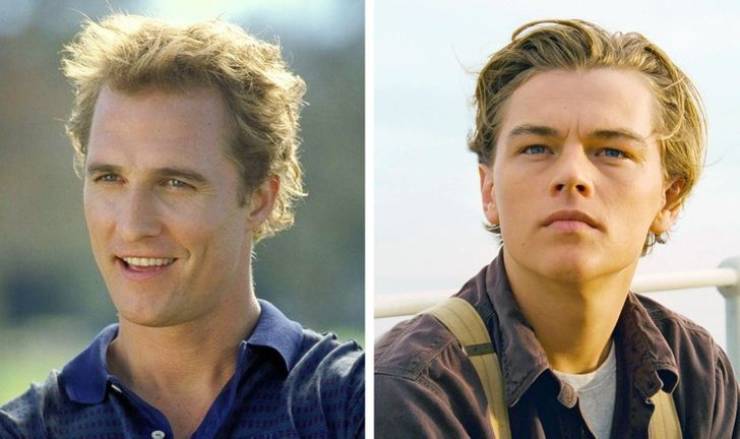 That’s right, the The Wolf of Wall Street co-stars once went up against each other over the role of Jack. It’s known that, before DiCaprio appeared, McConaughey had already auditioned and was absolutely sure that he would get the role. However, during Leonardo’s audition, James Cameron noticed how attractive the young actor was to the opposite sex: everyone — from the female accountants to the security service workers — gathered in the room to watch him. This magnetism played a decisive role in the selection of the protagonist. 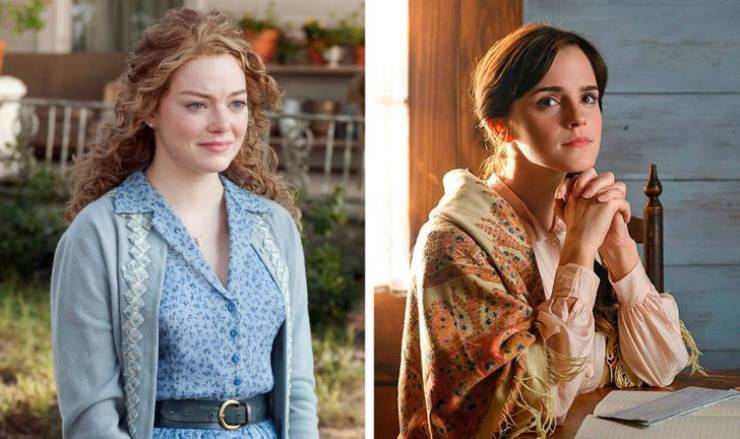 Lady Bird screenwriter and director Greta Gerwig had her heart set on Emma Stone for this role from the beginning of production. However, the actress was unable to take on the part because of promotional obligations for the 20th Century Fox film The Favourite, in which she played one of the lead roles. That’s why Sony Pictures Entertainment quickly found a replacement, hiring Harry Potter star Emma Watson. 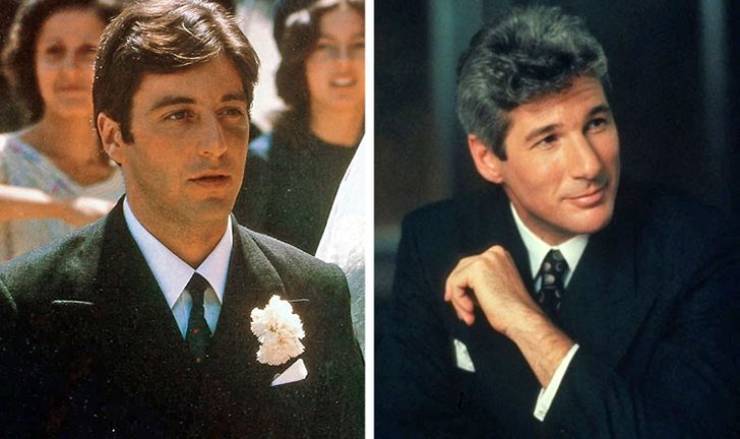 The casting process for this movie turned out to be quite difficult and long. Garry Marshall, the director, had several candidates for the role of Edward. Al Pacino was one of them. Unlike the others, before turning down the role, he auditioned alongside Julia Roberts. Richard Gere also initially refused the role, but Julia managed to convince him to play Edward after meeting with him. 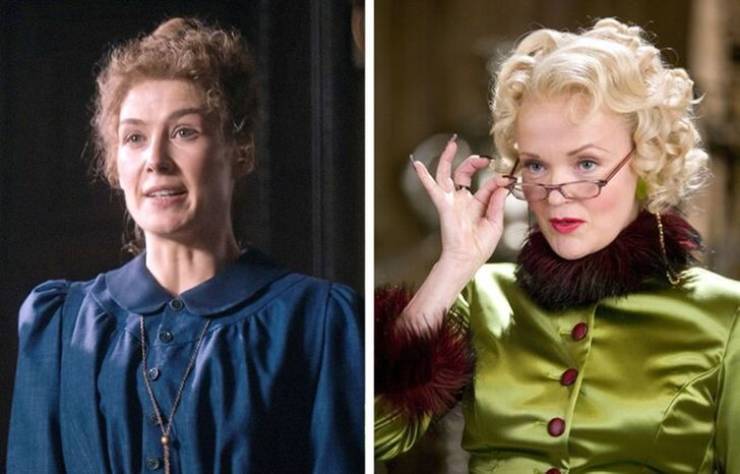 At first, Rosamund Pike was enthusiastic about the offer to play a character from the cult film series. But when the star found out that she would have to sign a contract for 2 movies at once, she had to turn down the role. Pike honestly admitted that fulfilling such obligations was too difficult for her, especially considering that it was a supporting role. It’s a shame, it would’ve been interesting to see her playing such an unusual character for her.

Nicolas Cage as Joel (Eternal Sunshine of the Spotless Mind)
6 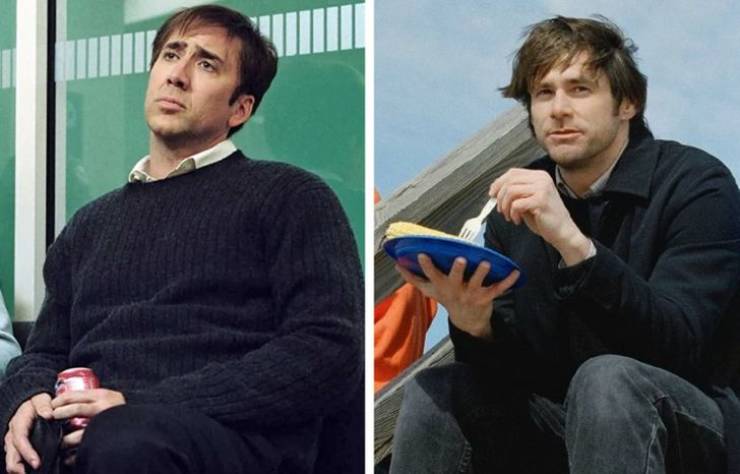 Before Jim Carrey got his hands on the script and expressed interest in the project, the film’s producers were considering his close friend Nicolas Cage for the role of Joel. However, Cage was unavailable because of his increased demand among independent directors after starring in the film Leaving Las Vegas. 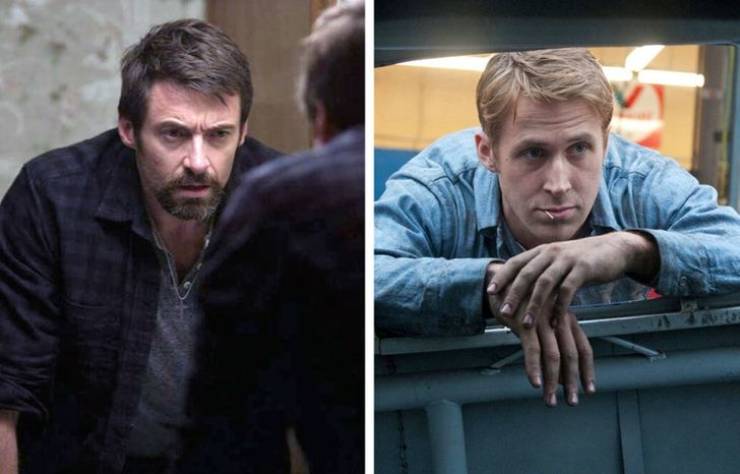 The film adaptation of Drive was announced in early 2008. At the time, Neil Marshall was listed as the film producer and Hugh Jackman was the main star. But by February 2010, everything had changed dramatically. Marshall was replaced by Mark Platt, who in turn contacted actors from his own talent pool.

Ryan Gosling was his favorite. Interestingly, before that, Gosling had already refused to act in several action movies, as he disliked films that focus more on tricks than on the characters. But the Drive plot piqued his interest, so he accepted the role from Platt two days after receiving the proposal. 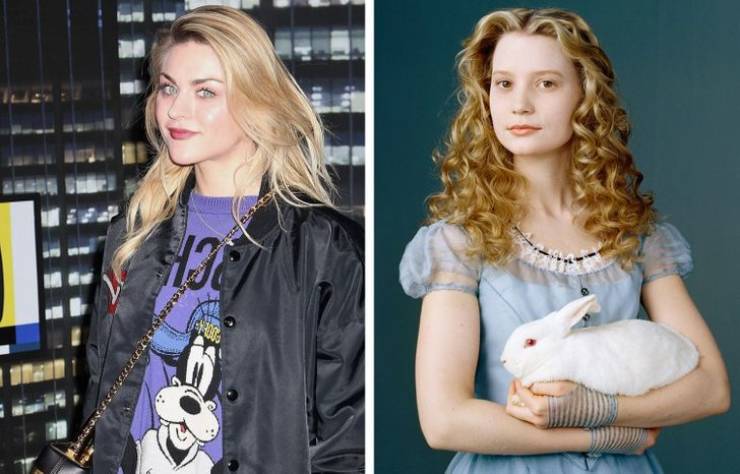 Tim Burton, the film’s director, believed that the daughter of Kurt Cobain and Courtney Love would be a perfect fit for the role of Alice. However, at that time, Frances chose to go to college and refused to participate in the movie.

Jim Carrey as Jack Sparrow (Pirates of the Caribbean)
9 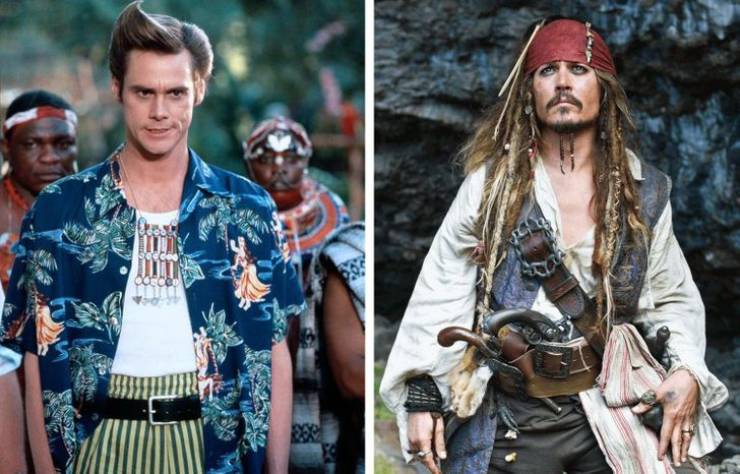 Many well-known actors were considered for the role of charismatic Captain Jack Sparrow. The scriptwriter himself wanted him to be played by Hugh Jackman, but the studio had its eyes set on Matthew McConaughey because of his resemblance to Bert Lancaster. Later, however, Jim Carrey was offered the role, but the actor had to turn it down due to filming Bruce Almighty.

In the end, Walt Disney Pictures hired Johnny Depp, who at the time was interested in starring in a family movie. 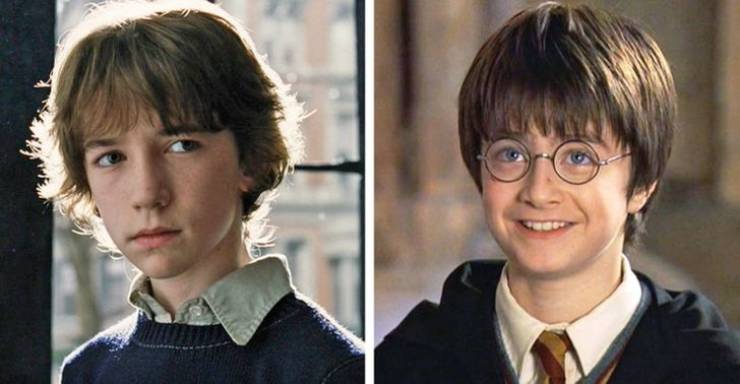 Few people know that Harry Potter was literally one step away from having a different face. The role of “The Boy Who Lived” almost went to Liam Aiken, best known for his role in the movie Stepmom, but he lost it a day later. The fact is, the producers wanted a British actor to play the role of the young wizard.

In an interview, Gosling and McAdams admitted that Britney Spears, with whom Ryan had already worked on The Mickey Mouse Club, had originally auditioned for the role of Allie. Rachel was, in a way, the last in line, but she ultimately passed the selection process. Later on, in the midst of filming, the actress was again on the verge of losing the role.

Gosling asked the director to find a replacement for McAdams due to him not getting along with her and not feeling anything when interacting with the actress on set. However, they hit it off soon after and things started going smoothly.

Will Poulter as Pennywise (It)
12

The film was originally going to be directed by Carey Fukunaga, who wanted to see Will Poulter play the role of the macabre Pennywise. But sometime after he left the project in 2015 due to creative differences, Poulter also withdrew from the film. It is assumed that he did it out of solidarity, or he was kicked out.

However, Andrés Muschietti, the new director, refuted these assumptions in an interview. He stated that he was also interested in collaborating with Poulter, but the actor expressed doubts about being a good fit for such a dark role. 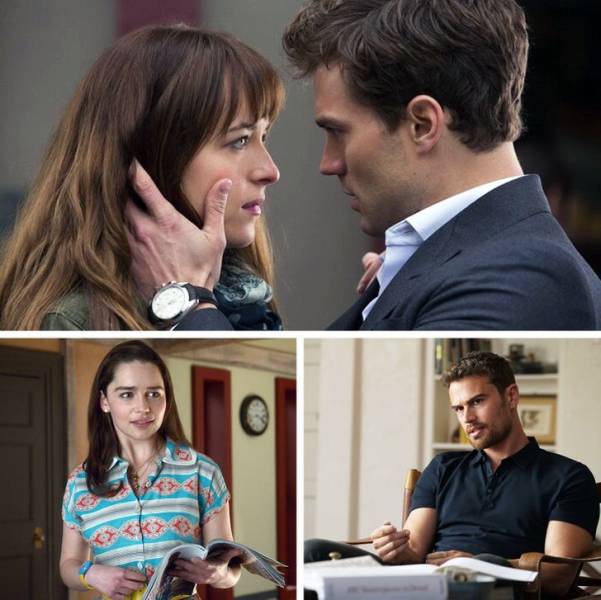 Many actors tried themselves for the role of this famous on-screen couple. Among the contenders for the role of Christian were actors such as Alexander Skarsgård, Christian Cook, and Theo James (who had already had a successful role in Divergent). Initially, the film’s director had cast Emilia Clarke for the role of Ana, and the actress herself was also keen on working with the team, but she was very scared by the abundance of on-screen nudity and explicit scenes.

In an interview, she confessed that “the last time that I was naked on camera on [Game of Thrones] was a long time ago, and yet it is the only question that I ever get asked,” and said that those scenes have affected her reputation. That’s why agreeing to a similar role again seemed impossible to her.

Not many people are aware that the star of the comedy series Saved by the Bell, Tiffani Amber Thiessen, auditioned for the role of Rachel Green and almost got it. The only obstacle to her final approval was her age. At the time the first episode of Friends came out, Tiffani was only 20 years old. Even Jennifer Aniston, at 25, was the youngest of the cast.

From the beginning, Tim Roth was one of the main candidates for the role of Professor Severus Snape. Everyone liked the actor: the writer J.K. Rowling herself, the director, and the cast. However, in the end, he dropped out of the project to work with Tim Burton on Planet of the Apes. However, the actor does not regret his decision and assures that Alan Rickman did his job perfectly.