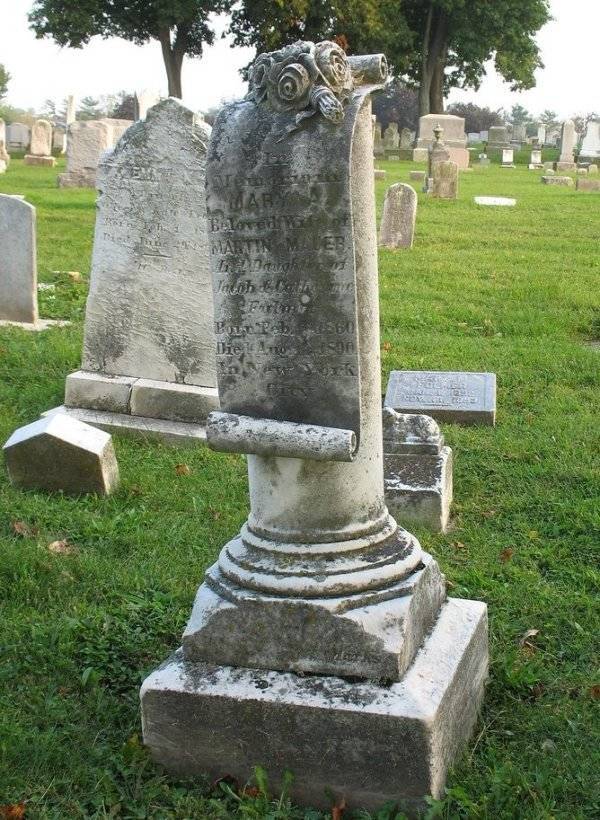 A scroll engraved on a tombstone with both ends rolled up can indicate that part of life has already unfolded while the future remains uncertain. 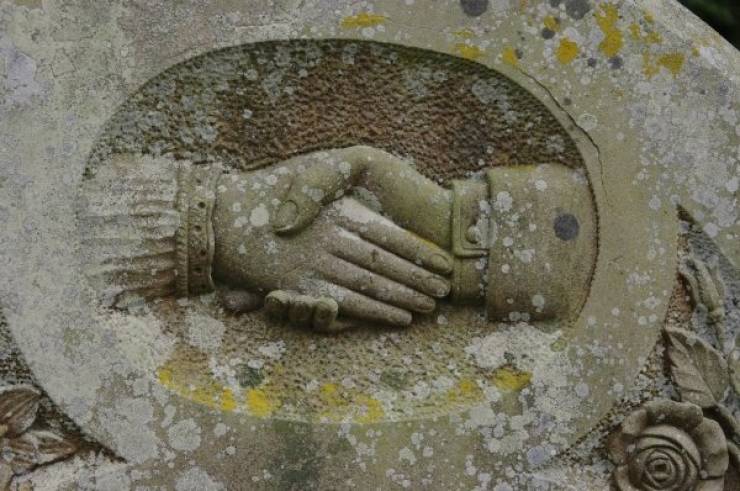 Depending on the position of the thumbs, clasped hands can represent shaking hands or holding hands. A handshake can mean a greeting to eternal life. If clasped hands have different cuffs, it could indicate a bond between the deceased and a spouse or relative. 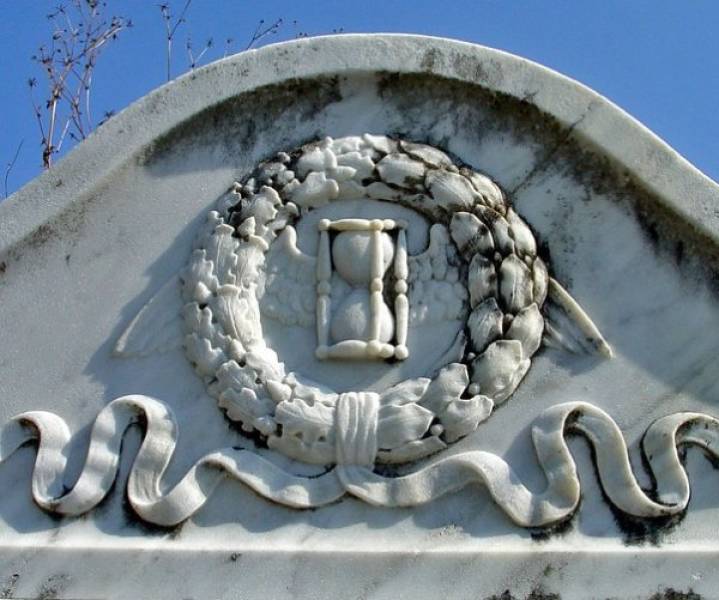 The hourglass can symbolize the march of time. An hourglass on its end may mean the deceased died suddenly, while a winged hourglass communicates how quickly time flies. It may also be construed as a message to the living — time is short, so don’t waste it. 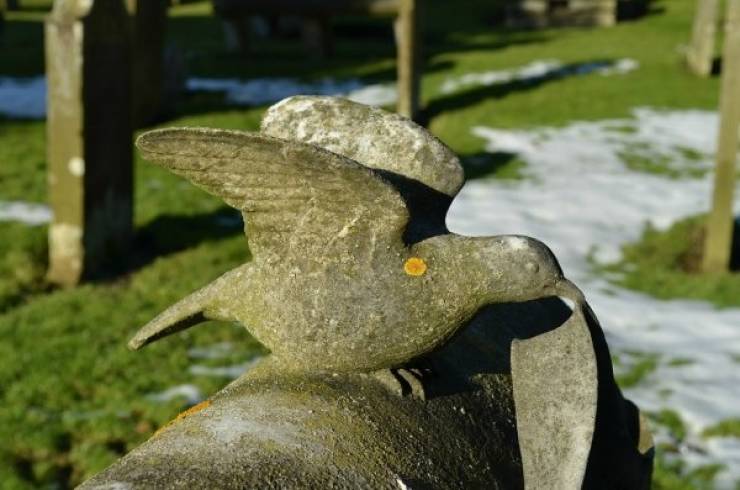 The dove often represents a tie between the deceased and Christianity, but depending on how the dove is positioned could change its meaning. If it’s flying upward, the soul is ascending to heaven. If it’s flying down, it represents the Holy Spirit arriving at the baptism of Jesus Christ. If it’s holding an olive branch in its mouth, it refers to an ancient Greek belief that olive branches could ward off evil spirits. 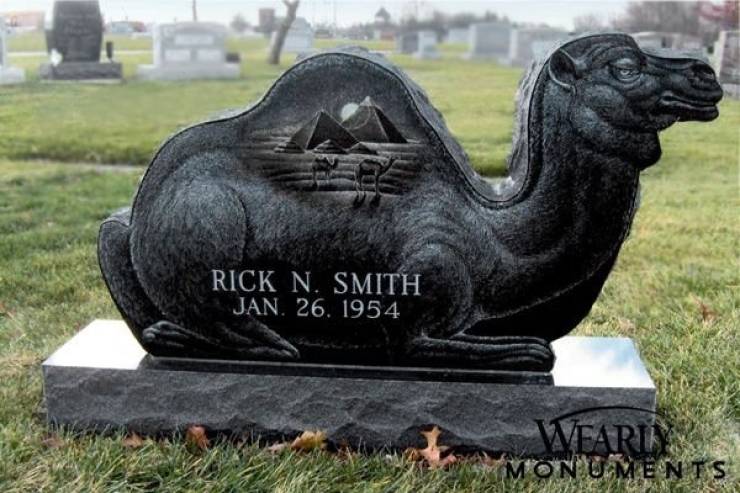 The camel usually signifies the Imperial Camel Corps that occupied desert regions during World War I, but can also represent a long journey or skilled guide. 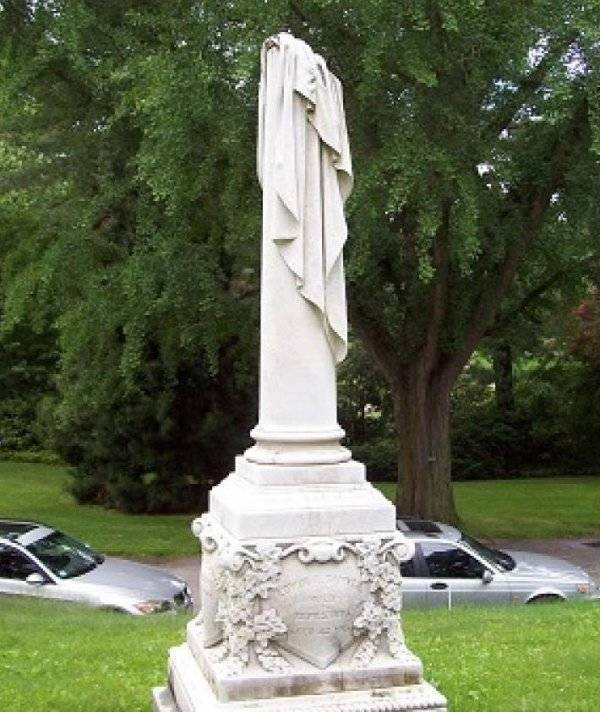 The broken column represents a life that was cut short. 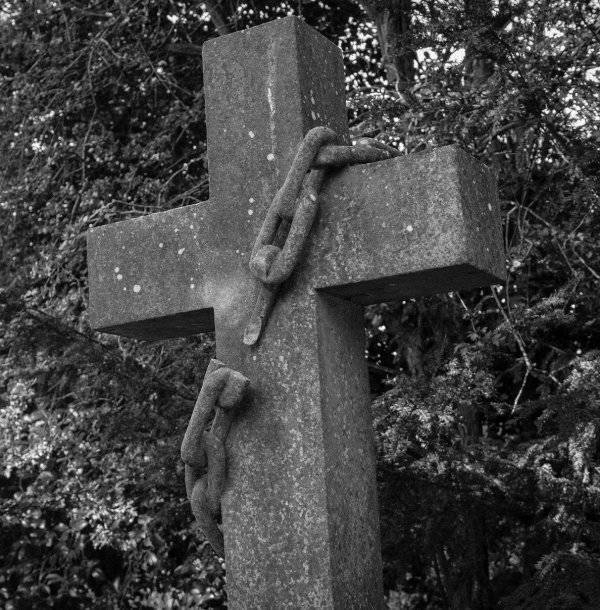 In the medieval ages, a chain was often used as a metaphor for what kept the soul in the body. The broken chain found on tombstones represents the soul being freed from its physical shell. If the chain is unbroken and if it features the letters FLT (for Friendship, Love, and Truth), it probably means the deceased belonged to the Independent Order of Odd Fellows. 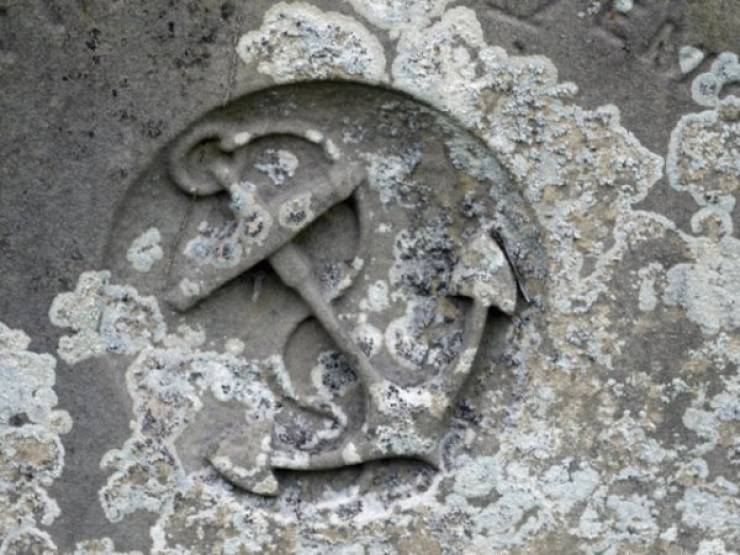 Unsurprisingly, anchors are used to represent someone who served in the Navy. The anchor is also a symbol of hope and the end of the physical life’s journey. 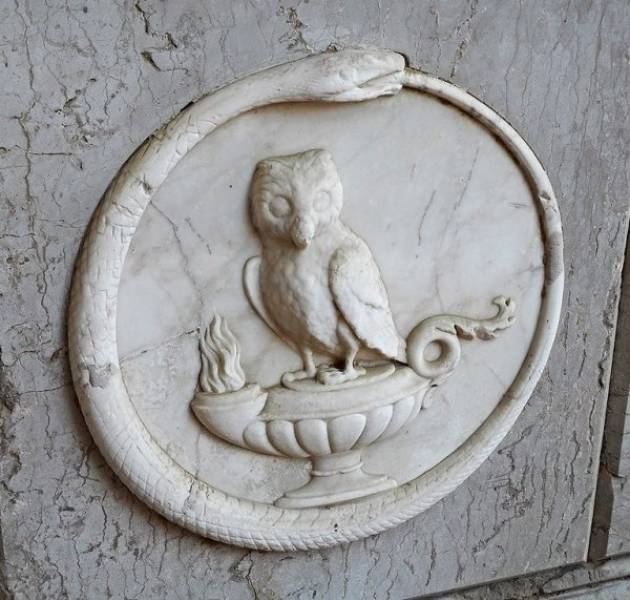 The oil lamp represents a love of learning and knowledge. It can also refer to how the spirit is immortal. 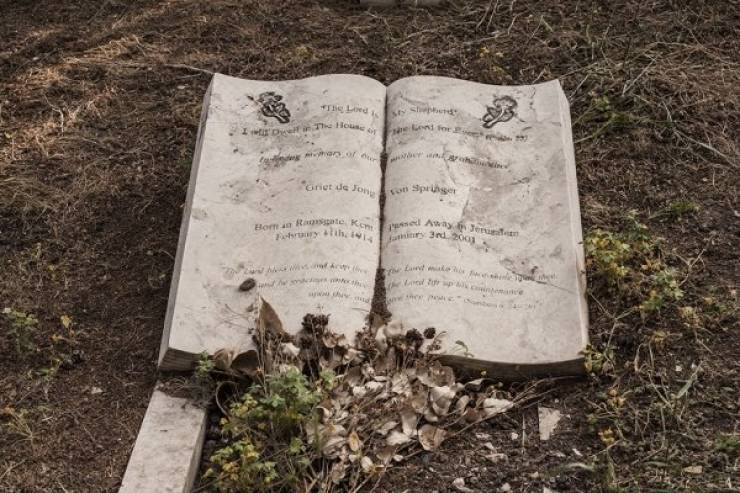 A book on a tombstone usually refers to a sacred text such as the bible. If a book is found with a dog-eared corner, it could indicate the person’s life ended prematurely and before their “book” was finished. 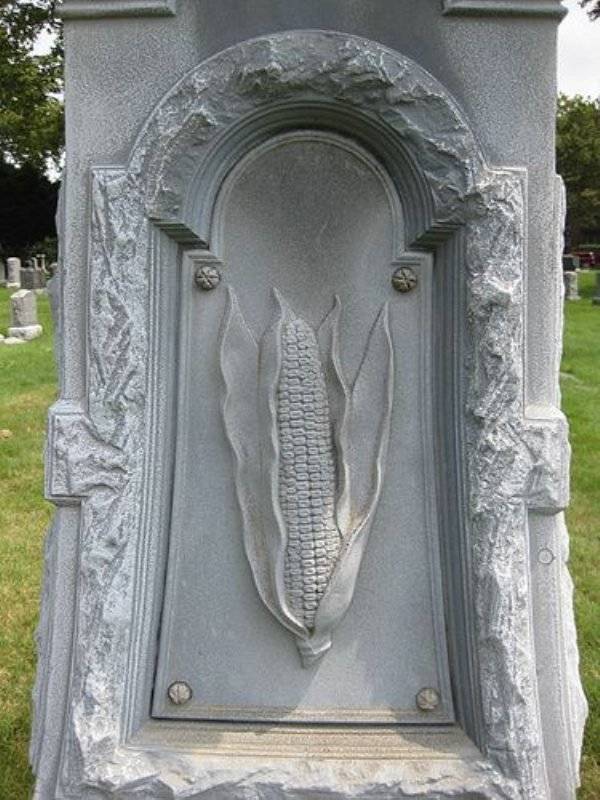 It used to be a custom to send corn instead of floral arrangements to a farmer’s family, so corn is usually placed on tombstones of farmers. Corn can also symbolize transition and rebirth. 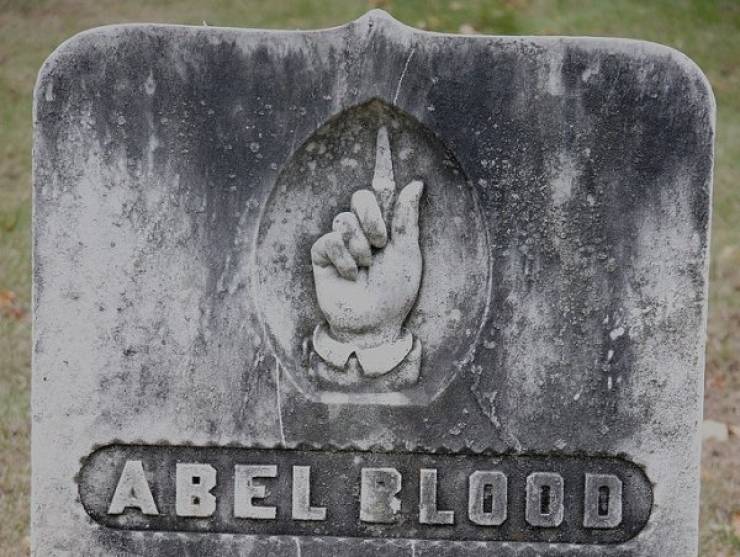 This symbol can be interpreted in many ways, but the most common is that the finger is indicating the person has left the land of the living and ascended. 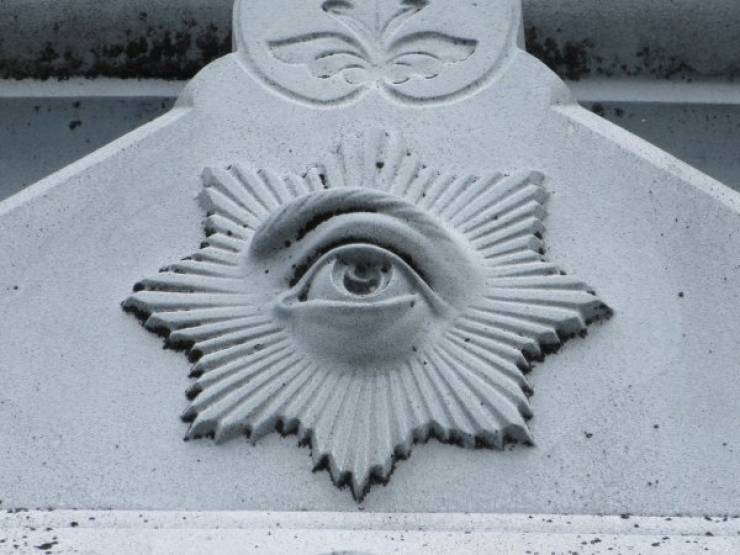 Often surrounded in a burst of sunlight or a triangle, the eye typically represents the all-seeing eye of God and is often found on the tombstones of Freemasons. 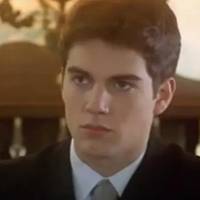 Vessie 1 year ago
Holy god ... I am a stonemason. I created gravestones for a living. And whoever imagined that stuff needs to go back to astrology. Never heard a single thing from this list in my whole professional life.
Reply
-3 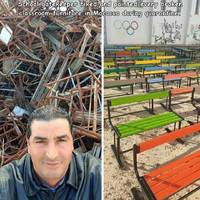 It sounds like you're not very good at your job, eh?
Reply
0 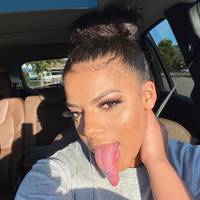 Iggy 1 year ago
#9 To me it seems there is a whole [email protected]#kton of imagery going on. The wisdom of the owl? Ouroboros (snake eating it's own tail) signifying eternal destruction and rebirth.
Reply