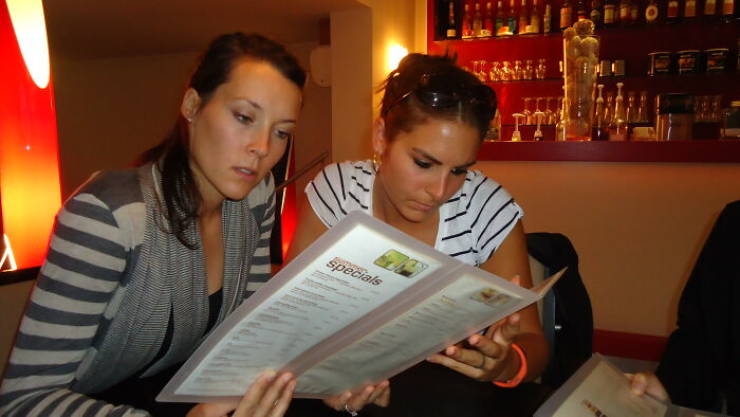 "If a restaurant has a HUGE menu...it's all frozen" 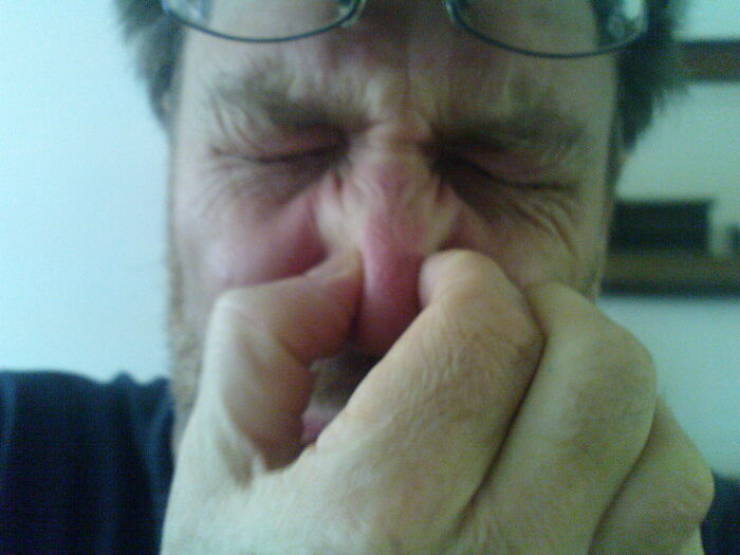 "The first thing they told us in culinary school when you're learning food safety is: If you enter a seafood restaurant and smell fish, leave" 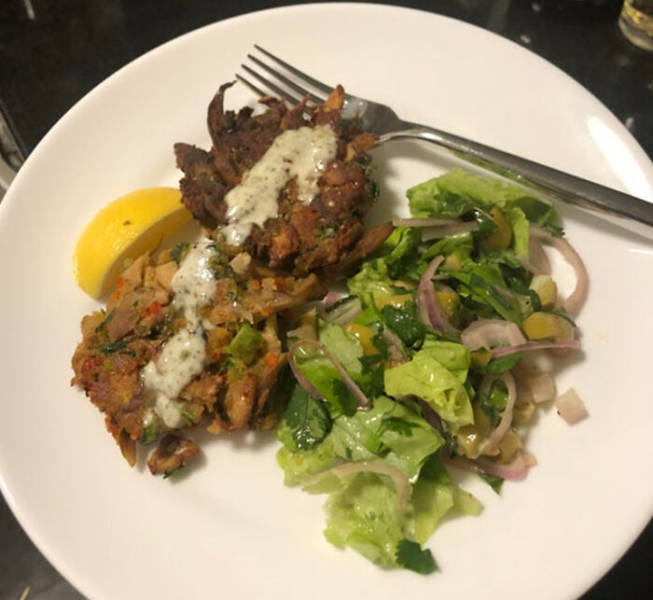 "In culinary school, every single chef instructor says the same thing: If it's misspelled on the menu, that's on purpose. It's so they don't have to sell you the real thing. A prime example is 'krab cakes" 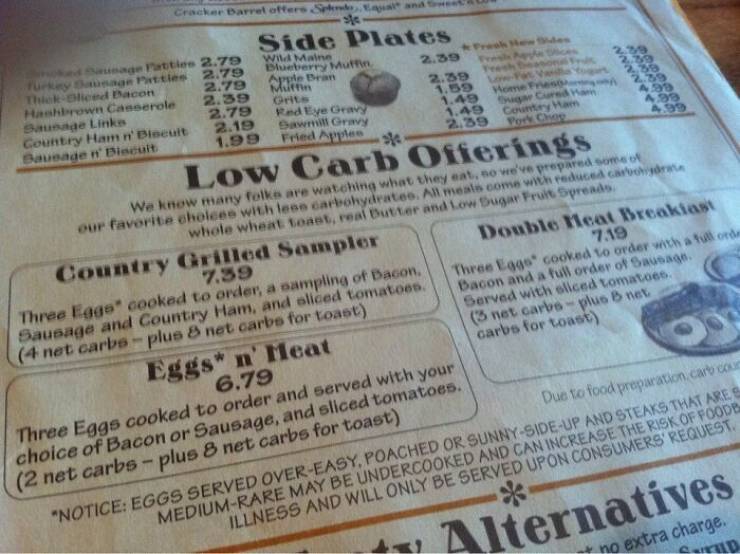 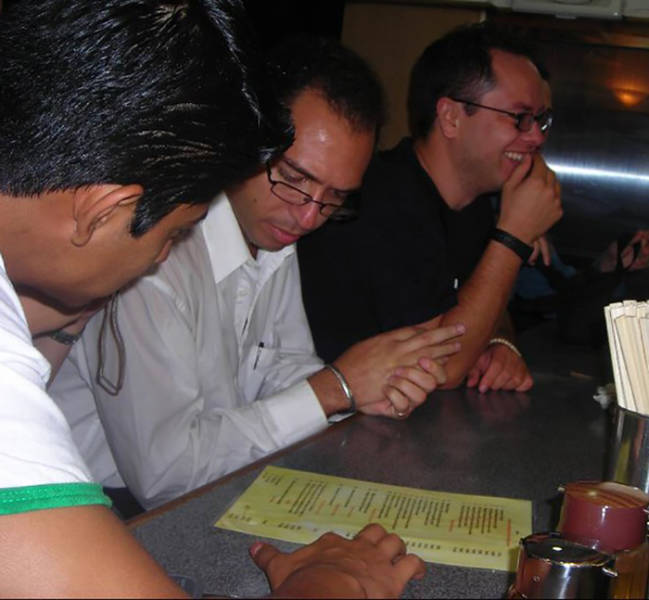 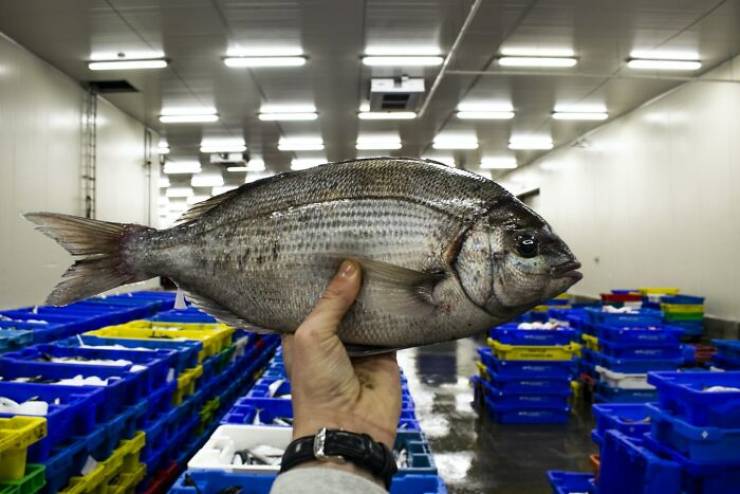 "'Catch of the day' restaurants better have a lake or an ocean within a 50-mile radius. If they are advertising fresh-caught Alaskan salmon and you aren't in Alaska, chances are that [thing] is not fresh" 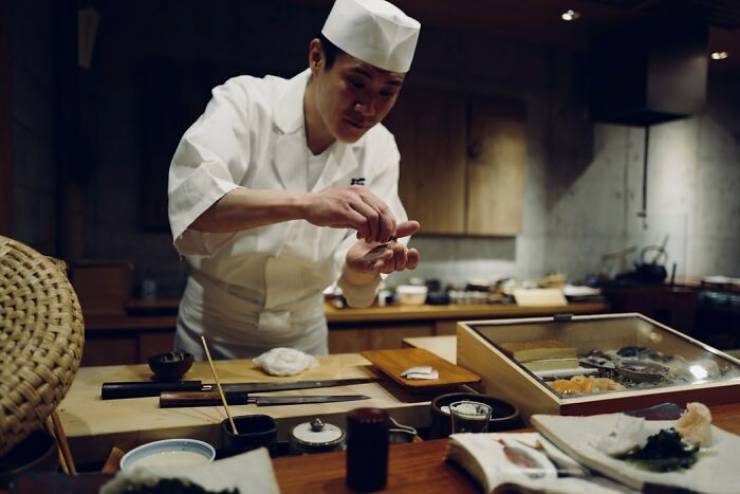 "We have a sushi place me where the chef gives you free samples of future dishes. This usually means they take pride in their work and want to see peoples reactions before committing it to the menu." 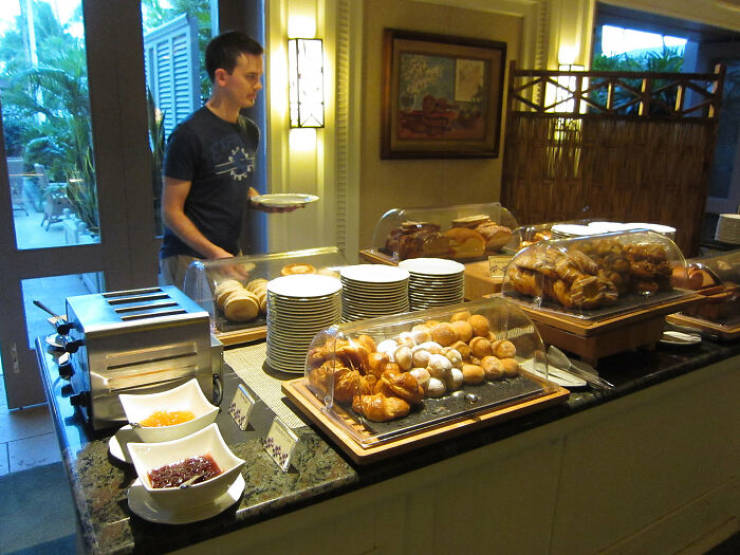 "No matter how well managed a buffet is, it can never be sanitary. It is not reasonably possible to run a sanitary buffet business" 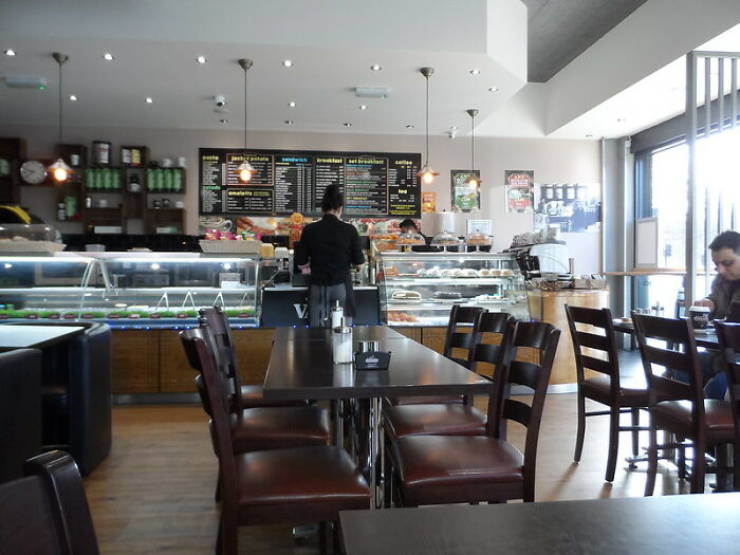 "If the area is busy but the restaurant is empty, that’s usually a bad sign." 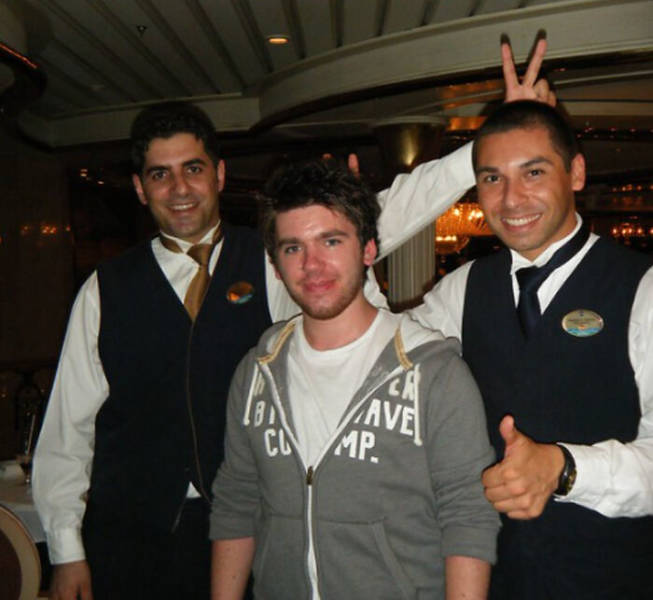 "I always look for how the staff interact with each other. If they all seem to enjoy being there, and coordinate well, more often than not it's because everything is running smoothly and they have a good system, which usually means they know what they're doing and you can expect good food" 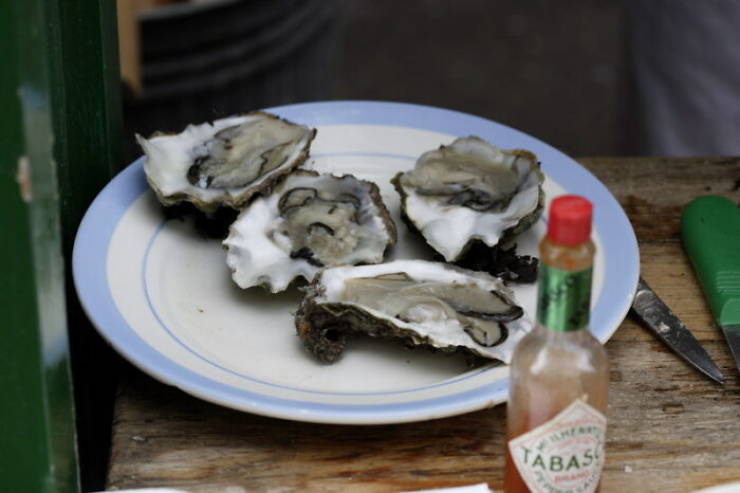 "Ask where your oysters come from. If they don’t know, you don’t want them. Same for most seafood." 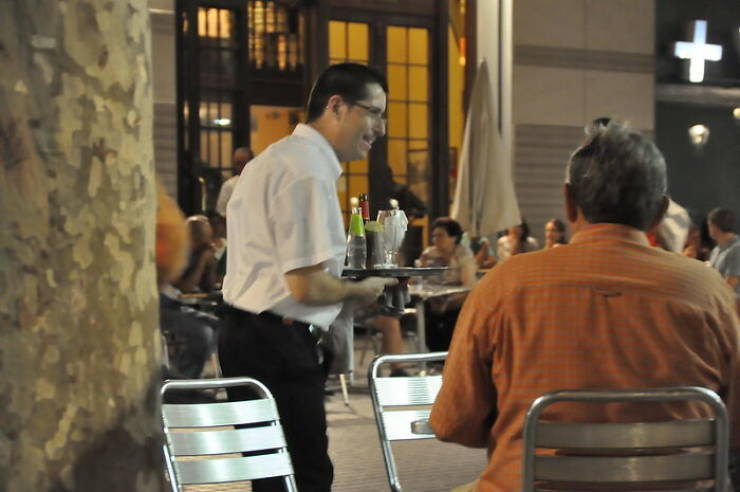 "If employees try to argue with you about food quality in order to dissuade you from sending something under cooked back, just leave. It means they have a cook who can't take criticism and your chances at getting a sneezer are greatly increased." 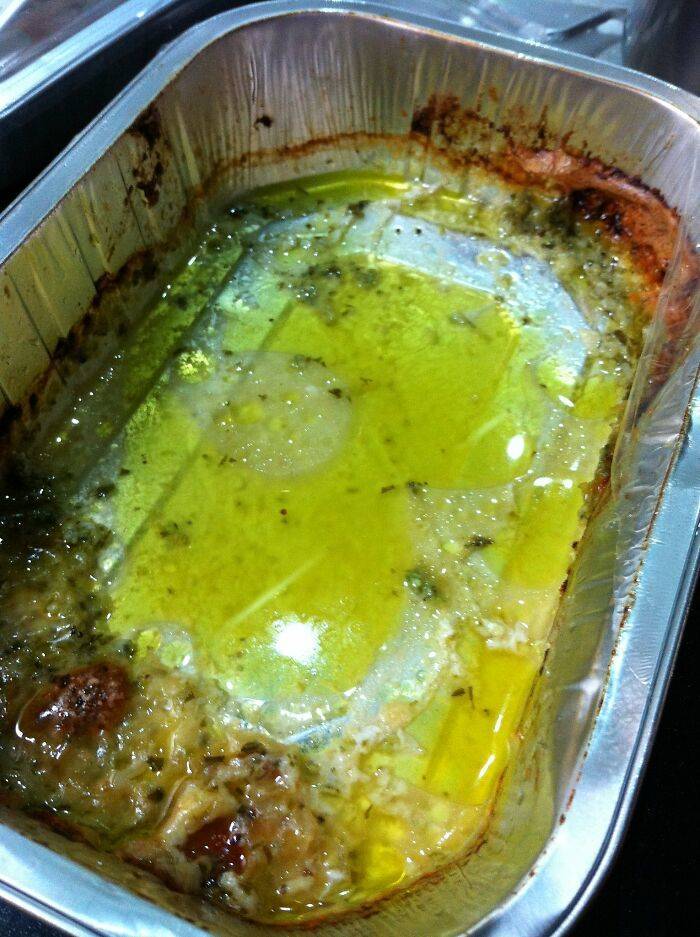 "This is late but I clean kitchen exhaust systems. If you walk in a restaurant and can smell grease walk out. That means the place isn’t clean. From the exhaust system to cooking equipment.

We clean some places where grease drips off the hoods onto cooking surfaces." 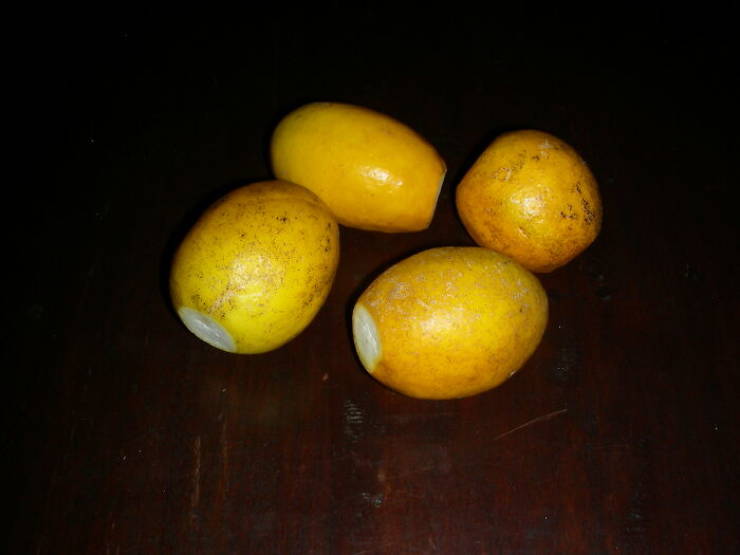 "Most often, lemons for water are really gross and dirty" 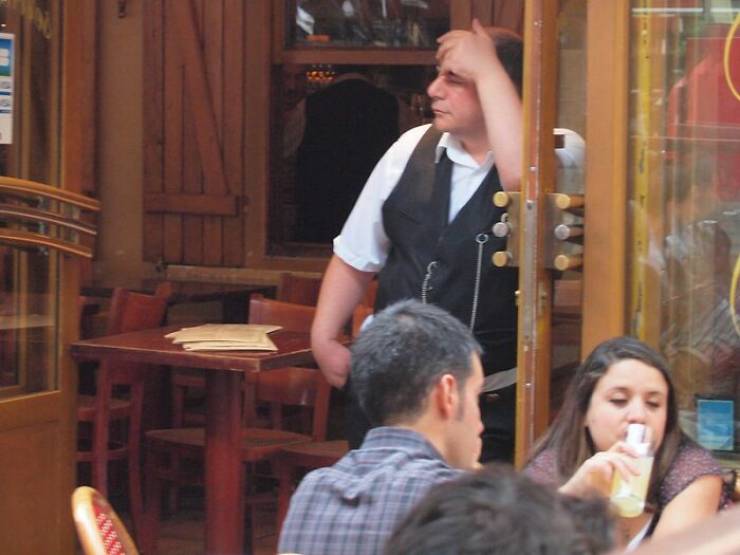 "Watch the wait staff. If the majority of them seem disgruntled or upset, things probably aren't great. They probably don't care about your food if they aren't being treated fairly." "Pastry chef here. As much as people say avoid specials, I can't speak for everyone but at least in desserts/breakfast pastries, if you see something new its worth trying. Chances are it's something the chef has been working on for weeks on their own time, there's a lot of love and effort put into it.

Also, the standby if the menu is a book, it's probably not great.

The biggest thing to keep an eye on though imo is the staff. If there's pissed off people, get out as fast as you can obviously. If everyone is kinda apathetic and not talking to each other much, get out. That's also a [email protected]#tty environment, everyone is probably really passive aggressive, and that's going to show. If people seem genuinely good with being there even if it's busy or if there's playful ragging going on, that's where you want to be. The better the staff gets along, the better everthing in the place runs." 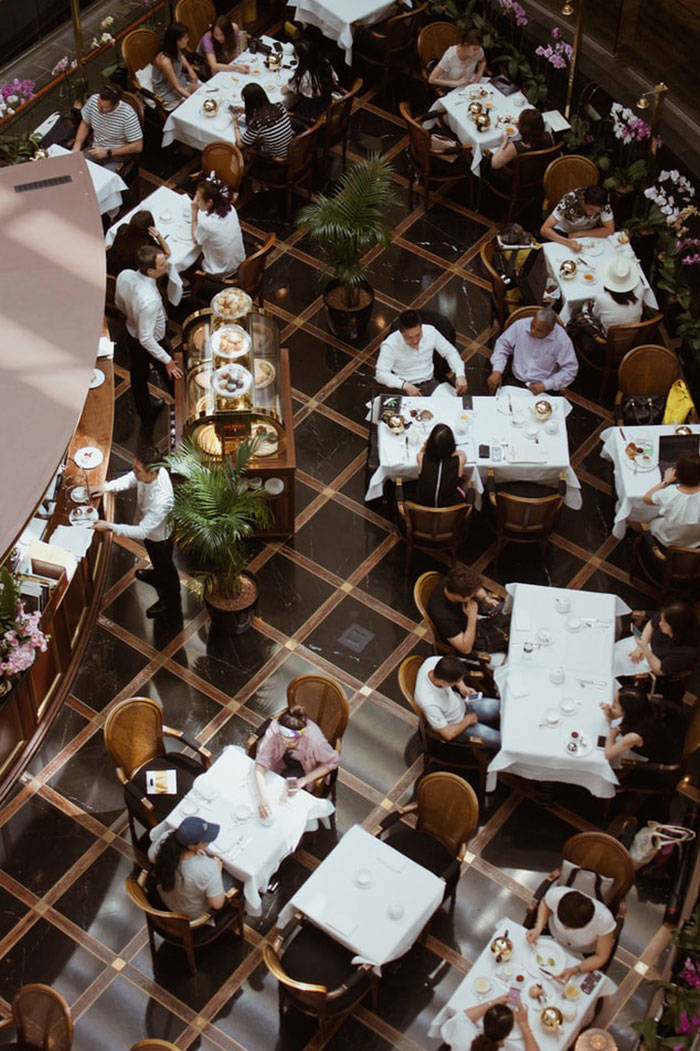 "When my boss (the owner) used to host and people would complain to her about the hour wait on Saturday night at 7pm and then threaten to leave, she would tell them, "If the restaurant you choose does not have a wait on a Saturday night, you may not want to eat there." And then turn her biggest [email protected]#t-eating grin on them" 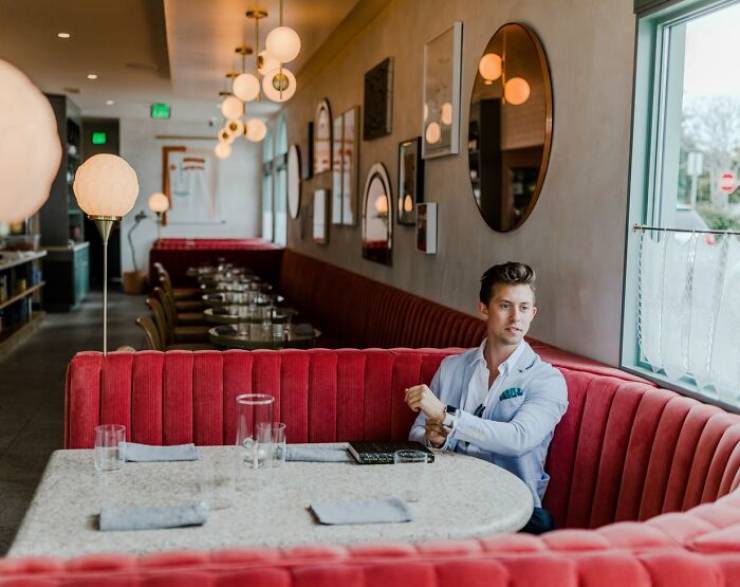 "Pro tip: Look up the health inspector reports for your county." 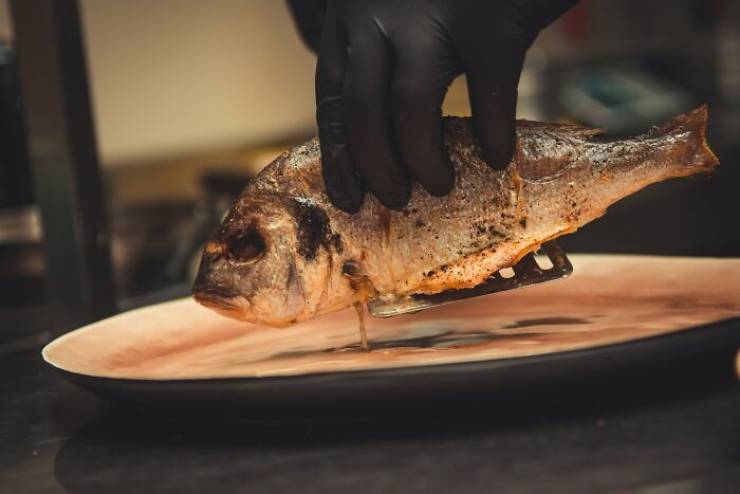 "Don’t order fish on Sundays. Most places get their fish deliveries on a Monday and on a Thursday. Fish goes off fairly quickly, and on a Sunday it’s really not great" 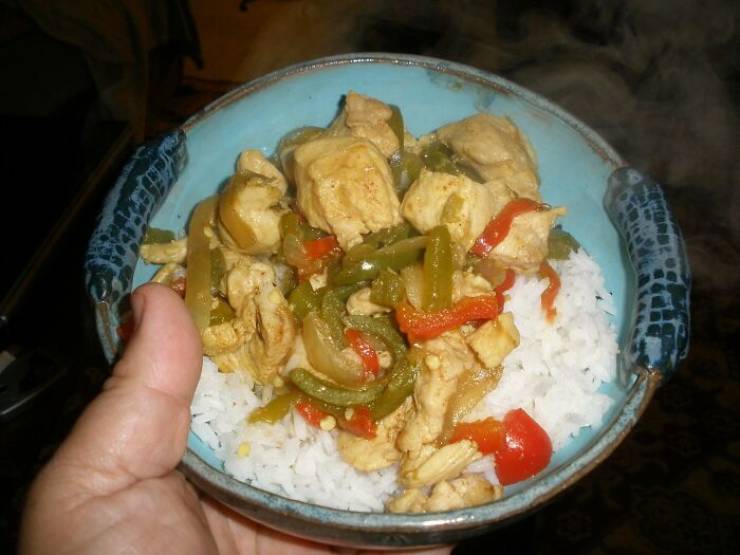 "Used to work in a fancy kitchen. Any place that is charging more than $25 for a chicken entree is a goddamn scam." 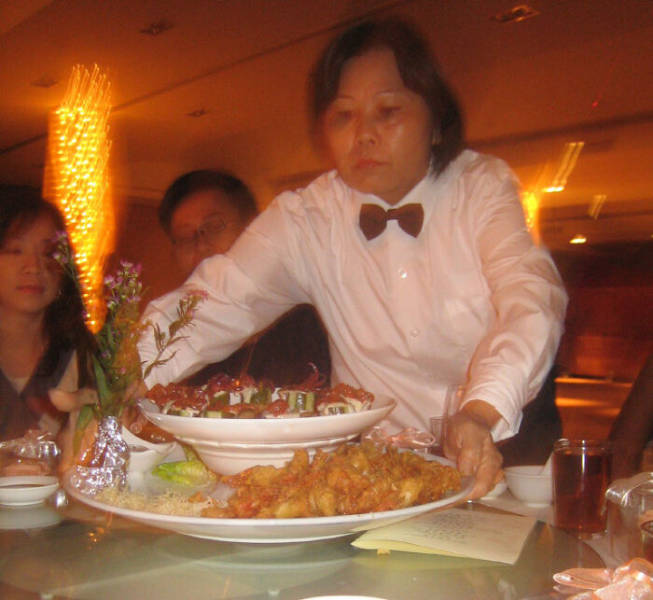 "If you order a meal that should take a long time to cook and it comes out very quickly, it’s been pre-cooked" 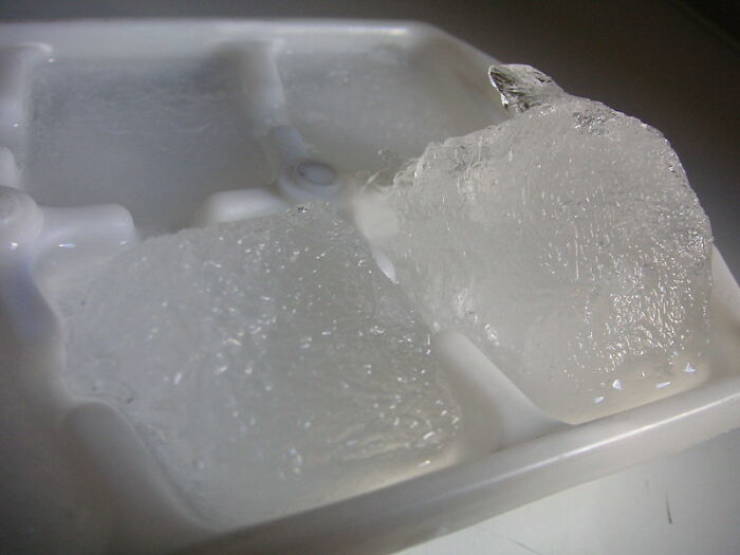 "I have a family member who’s worked in multiple different restaurants, and they always advise me never to get drinks with ice because too many places don’t keep their ice machines cleaned because it’s so often overlooked compared to other kitchen equipment"

"Easy way to tell if Mexican food will be good. If the salsa is bad, then the food is likely bad.

Mexican places that take pride in their salsa take the same pride in their food. If you get the watery, tomato sauce with chips then more than likely the food will be uninspiring." 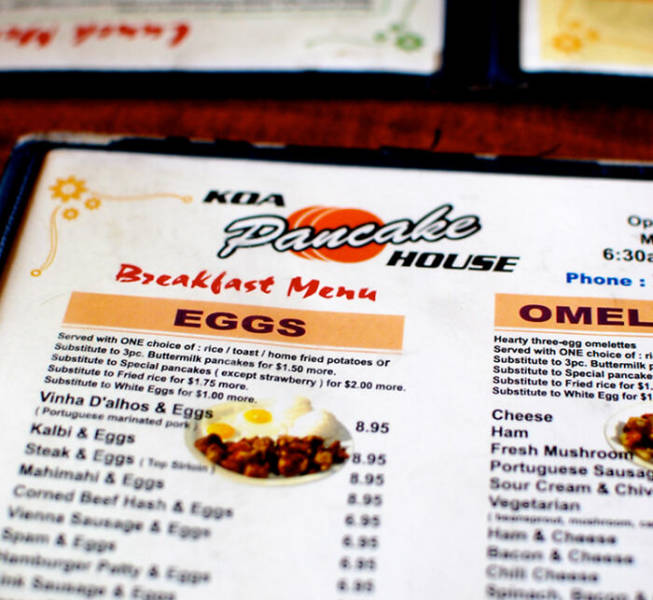 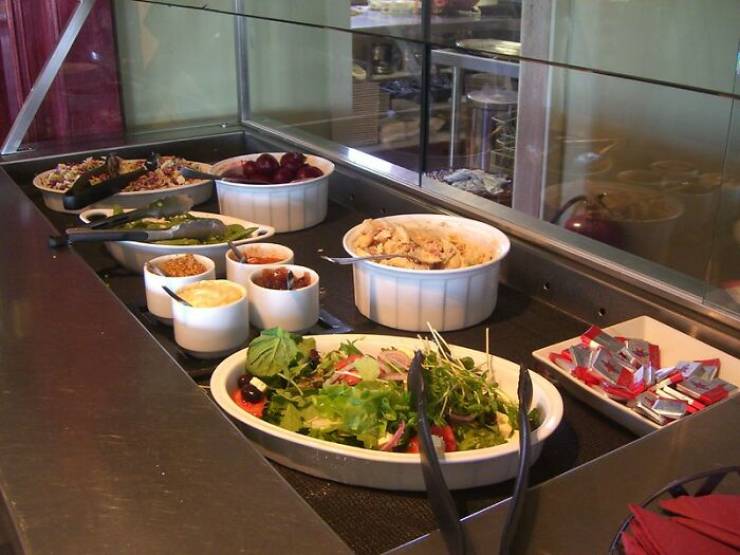 "Stay away from buffets and salad bars. A lot of the time it is the same stuff that just gets refilled over and over. Super gross." 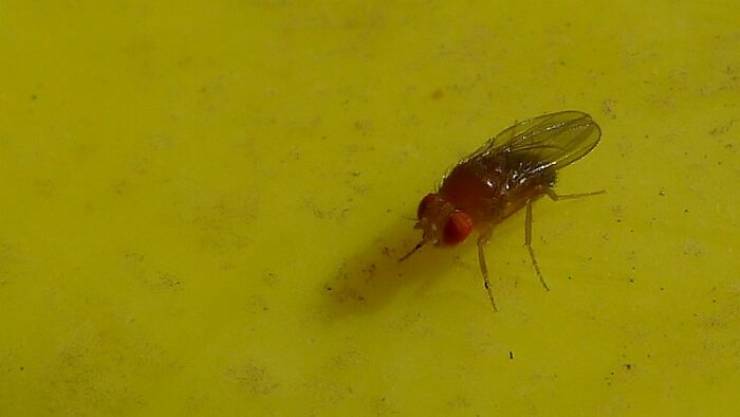 "Seeing fruit flies. Fruit flies are an indication of a dirty kitchen" 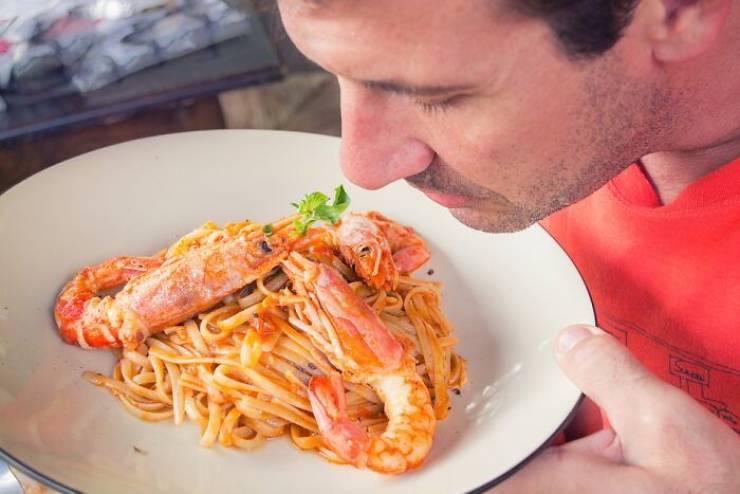 "How does the place actually smell? Does it smell like good food? Then it likely is. But if it smells like perfume or something sterile? That could be a sign that they are trying to hide something unpleasant" 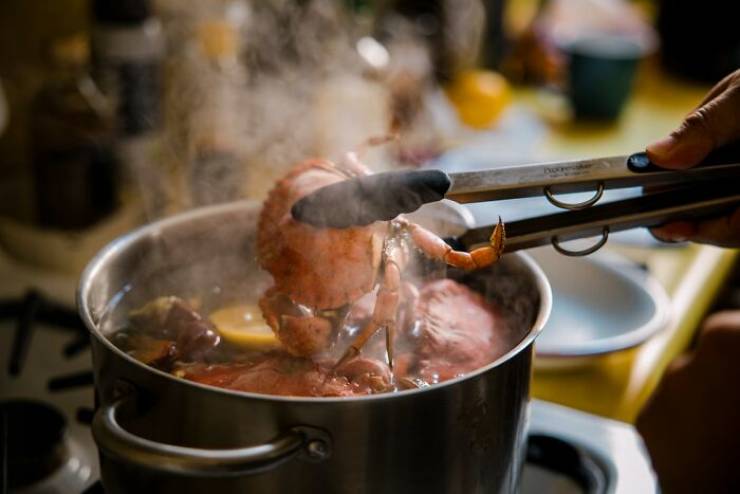 "Never order the bouillabaisse/cioppino/seafood stew if it's being run as a special. That means the chef has a lot of old seafood to get rid of and is putting it all in a flavorful broth to hide the taste"

"I recently went to a new-ish barbecue place.

I knew the moment I opened the menu it was going to be awful.

The place had at least 120 things on the menu that run the gamut from burgers to Lobster Thermidor. When you see that, you know it's going to be terrible. It means they're trying to do everything rather than focusing on a smaller range of things and doing it very well.

As I suspected, it was terrible." 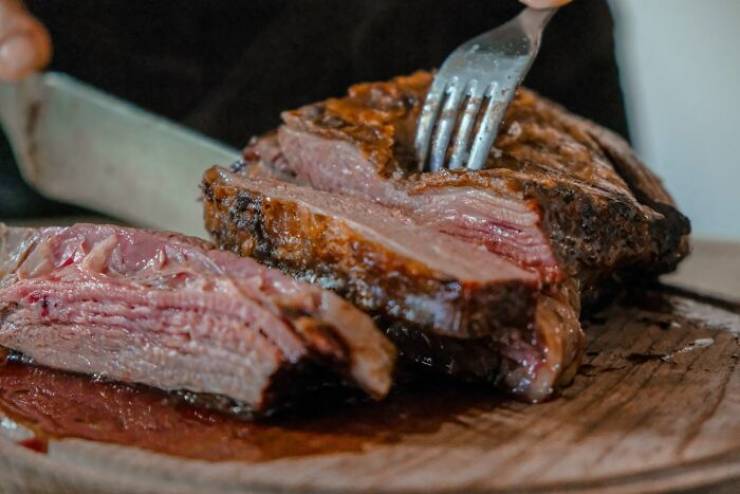