"The eyeball is the fastest healing part on your body."

"They are also the largest cell in the human body. The sperm is the smallest."

"30% of body waste is excreted via skin"

"The average human erection has roughly about 130ml of blood in it, while the average rabbit has about 126ml in its entire body. So, there is more blood in a boner than in a bunny."

"The average adult has 22 square feet of skin. Perfect size for a nice rug."

"When you cry and your nose becomes runny, it’s actually your tears."

"You will sooner die from lack of sleep than lack of food.

You can live, depending on your current body fat and health level, for months without food. Estimates are you that you will die for lack of sleep within 2 weeks"

"Every minute you shed over 30,000 dead skin cells off your body"

"You can poop out of your mouth if your intestines get backed up enough. It’s like vomit, doesn’t look like actual poop per se, but it’s still [email protected]#king disgusting."

"A human body can be drained of blood in 8.6 seconds, given adequate vacuuming systems."

"Humans have, on average, just as many hairs on their body as chimpanzees, human hair is just a lot shorter and finer."

"Swallowing has a cooldown" 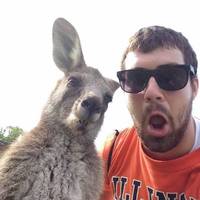 Order 12 month s ago
Didn't we see all of these recently?
Reply