People Share Their Stories About Great Encounters With Celebrities (15 GIFS)

“I once met Carrie Fisher at a book signing. When it was my turn, she kindly said, ‘Hello’ and all I could blurt out was ‘I love you!’ She hilariously replied, ‘I know’ (like in the Star Wars films). Carrie then told me she liked my Empire Strikes Back shirt, and I couldn’t help but just stand there and cry of happiness. Nicest woman in the galaxy!”

“I remember seeing Keanu Reeves in New York a long time ago when I was a young (and probably very annoying) pre-teen. I yelled out, ‘Yo, Neo!’ and then I mimicked the bullet-dodge motion from The Matrix. He looked back at me, laughed, and mirrored the same move in acknowledgement.

It’s such a great memory because I feel like anyone would have been justified in getting annoyed and shrugging a kid off, but instead, he was a good sport and humored me. I’ll never forget it.”

“Jim Carrey gave me a ride to the gas station after my car ran out of gas in Bel Air. I told him I was a huge fan of Ace Ventura, and I could mimic his laugh from the movie — we both had our heads out the window cackling away. He bought my gas and drove me back to my car — it was one of the greatest moments of my life.”

“Samuel L. Jackson was hands down one of the kindest and sweetest people I have ever encountered. In the ’90s, he ran a celebrity golf tournament a few times — when I was 12, I remember asking him if I could I bother him for an autograph.

His response — word for word — has stayed with me every day since: ‘Sweetie, don’t ever apologize for wanting to talk to me or ask for my autograph — I wouldn’t have a job if it wasn’t for you!’ He gave me a sweet smile and hug (with an autograph, of course). I’m 36 now, and still feel like he’s one of the most gentle and true spirits I have ever come across.”

“I went to Hawaii for my first major vacation in 2004 and ran into Adam Sandler on vacation with his wife. We couldn’t decide if it was him or not (we wanted to give him his space and privacy), but he walked over and introduced himself to us. His wife complimented my James Bond–inspired bathing suit, and they talked with us for a solid 15 minutes or so (this was right after 50 First Dates came out, and he was so humble when I told him how much I loved the movie).

He was genuinely kind, hilarious, and incredibly down-to-earth (he wore an Old Navy outfit just like everybody else). He made us laugh pretty hard when he pointed out David Spade, but warned us not to bother him because he’s ‘an @$$hole.'”

“I used to be a supervisor at a major theme park in the VIP department, so seeing celebrities was a pretty normal thing. One day, Paul McCartney came to the park and I went out to meet him along with my tour guides. He was very pleasant and shook my hand, and then we escorted him into the park.

Once inside, the guides took him to the rides and I stayed in the office to do paperwork — about four hours later, the group came back to the lobby to leave. Paul said goodbye to the guides who were with him and handed them gratuity — then he saw me and handed me a $50 bill, saying, ‘Here, have a drink on me, mate.’ I saw him for a total of 10 minutes the whole day — I actually still have the $50 bill. I don’t think I’ll ever spend it.”

“I had the pleasure of meeting Jennifer Hudson (well, I was actually hired to do a home inspection for her). Even though I’d just started learning how to play the ukulele, I asked her if she wouldn’t mind singing if I played her a song, and I was floored when she agreed to it.

She was so sweet and humble, and was gracious enough to do a duet with me — it still gives me goosebumps thinking about how extremely talented she was. I was completely gobsmacked at how amazing her voice really was, which paled in comparison to how incredibly nice she was.”

“I met Meghan Markle during her Royals trip through New Zealand — when she and I locked eyes, she bypassed everyone else to speak to me. She asked me who I was, and she let me ramble on about how much of an inspiration she is to me as a feminist and biracial actor.

She told me to keep going after my acting dreams and said, ‘Don’t give it five days — give it five years.’ We said goodbye and when I started crying from feeling overwhelmed, she walked back and held my hand and told me not to cry. It was the best damn day of my life.”

“I met Angelina Jolie when she was filming Girl, Interrupted (they were filming across the street from the daycare/after-school program I went to). One day, she came over during a break and brought us tons of new toys, games, clothes, and snacks. I will never forget how genuinely kind and warm and lovely she was to all of us.

I was a little bit older than most of the other kids (I was 12), and Angelina took the time to talk to me. She asked what I was interested in, and I said I loved reading classic experimental fiction — she came back the next day before she left town to give me a copy of The Sheltering Sky. She wasn’t super famous at the time, and she was just the sweetest and funniest person — I still have the book.”

“I met Jason Momoa at a convention. I was in a wheelchair, and he was in the elevator. I wheeled in and looked up in shock, and he grinned at me and said, ‘I’m not that guy, I’m just a good cosplayer.’ He got quiet for a moment and then laughed really hard.

When my floor came up, even though it wasn’t his floor, he insisted on helping me out. I squeaked out a request for a picture and aimed the camera at him — he said, ‘Hell no, sweetie, you’re getting in this one,’ and tossed my camera to his friend. He was so sweet — also huge. H-U-G-E.”

“I served Renée Zellweger once when I was honestly having a really [email protected]#tty day. She had three kids in tow, she was dressed in yoga pants and a T-shirt — nothing about her screamed ‘celebrity,’ and I was focused on other stuff. I messed up on her order twice, and she honestly couldn’t have been nicer about it (‘Oh, no problem! Just bring it when you can’).

She went out of her way to make small talk, the kids all thanked me after the meal was over, and she gave me a hug on the way out and an amazing tip for subpar service. I only found out who she was when I went to run her credit card and it said ‘R K Zellweger.’ She was a total dream.”

“When I was 8 years old, I was in New York City and went to the Disney store with my parents. I walked upstairs and guess who I saw: Raven-Symoné! I shyly approached her and asked for a picture and she said, ‘Of course, sweetheart! I love your outfit, by the way!’ I walked away singing the That’s So Raven theme song, and she sang it along with me!”

“I went to a Britney Spears concert in Las Vegas and my friend happened to know someone who worked with Britney, so we got the chance to meet her before the show! When I finally got to see her she was incredibly shy and quiet, and just before I left, Britney said, ‘You’re really pretty!’ I could have just DIED right then and there.”

"About 14 years ago, my friends and I went to a concert with Snoop Dogg. After the show, one of my friends went along to a club where there was an afterparty. She wasn't dressed for 'da club' and was wearing dirty old sneakers and jeans. The bouncer wouldn't let her in, but Snoop was there and turned to the bouncer, saying, 'Nah, man, she's wit me' and let her in.'"

“My cousin caddied for Michael Jordan at a charity golf tournament — he was around 14 years old at the time, when baggy Dickie pants were all the rage. By hole #9, my cousin was sweating in the Midwest heat.

And as they passed the Pro Shop to proceed to hole #10, MJ stopped and handed my cousin his credit card, saying, ‘It’s hot outside and [you’re] sweating. Run inside and get yourself some shorts.’ My cousin quickly got a pair of shorts and caddied the rest of the round, and MJ tipped him $600.” 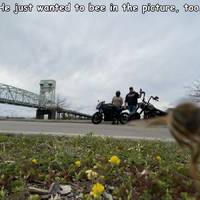 Saul 9 month s ago
I've met quite a number of famous folks in my day but honestly nothing to write home about~!
Reply