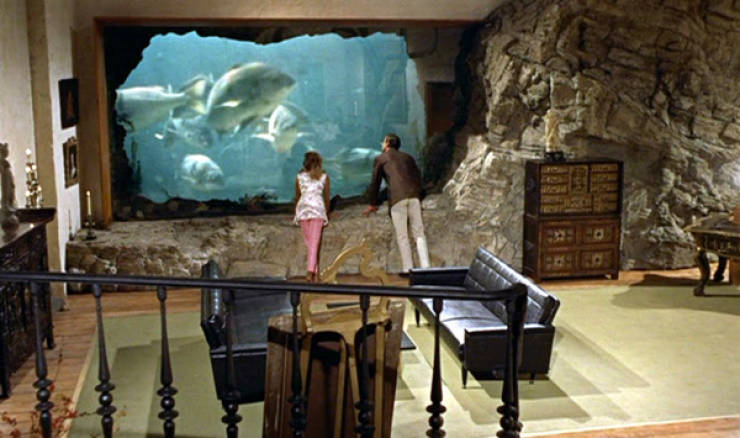 "The aquarium in Dr No (1962) was fake. To create it, the production team projected some stock footage of fish onto a screen. However, they only had footage of small fish, so they maximised it. In-universe, the villain explains that the glass of his aquarium has a “magnifying effect”."

"The self-lacing Nike shoes from Back to the Future Part II (1989) were modified so the laces exited the bottom of the shoe. Michael J. Fox stood on a platform, and a stagehand underneath pulled the laces to make the effect." 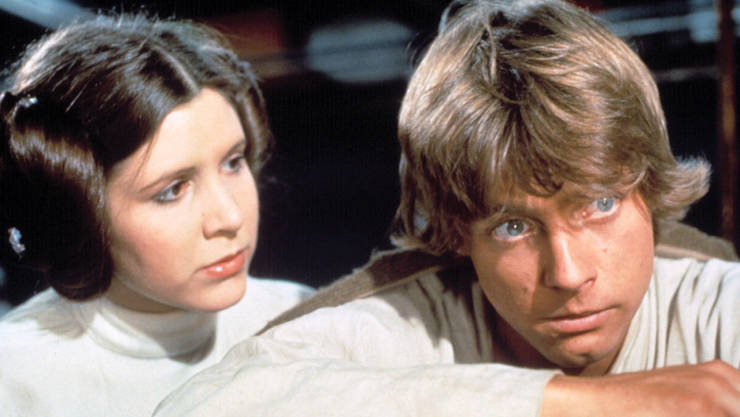 "In Star Wars: Episode IV – A New Hope (1977), all the wide shots of Luke flying across Tatooine in his speeder were achieved by placing a mirror underneath a version of the prop with a motor and wheels." 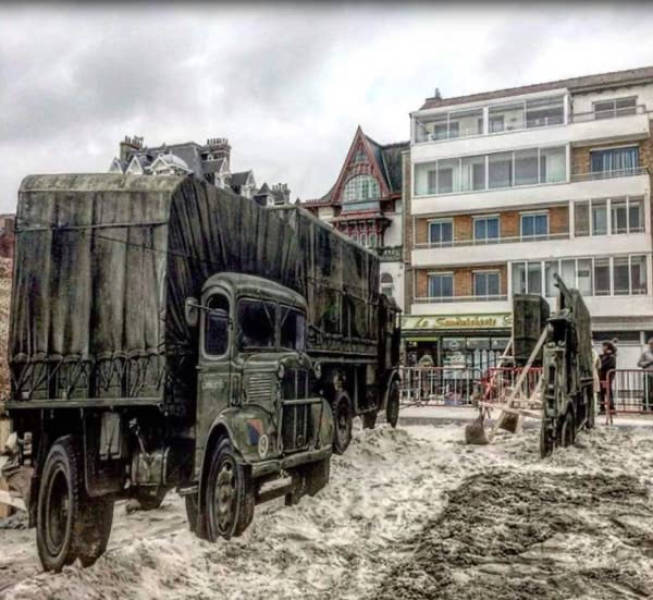 "In Dunkirk (2017), they tried to use as little CGI as possible, so they used forced perspective flats to decorate scenes." 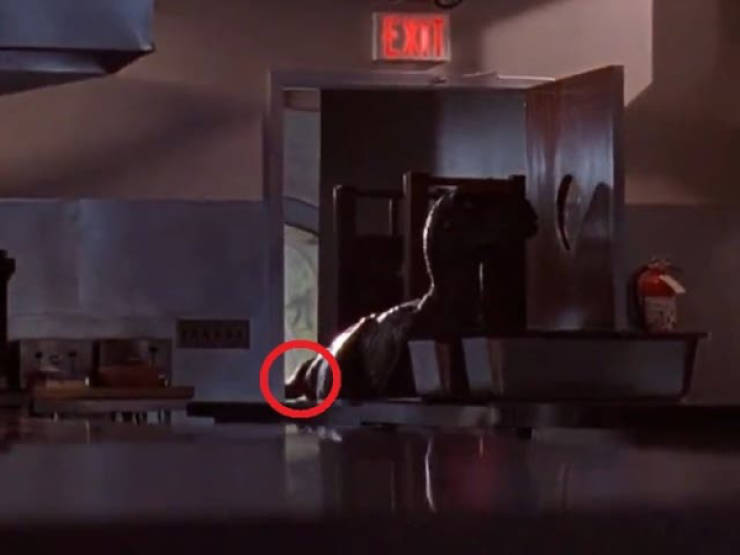 "In Jurassic Park(1993), there is a scene where the raptor opens the door to the kitchen and you can spot an operator grab the raptor’s tail."

"In “Indiana Jones and the Temple of Doom” the sound effect used as the Sacrificial Pit is opened is the same sound used as Darth Vader’s lightsaber ignition in The Empire Strikes Back." 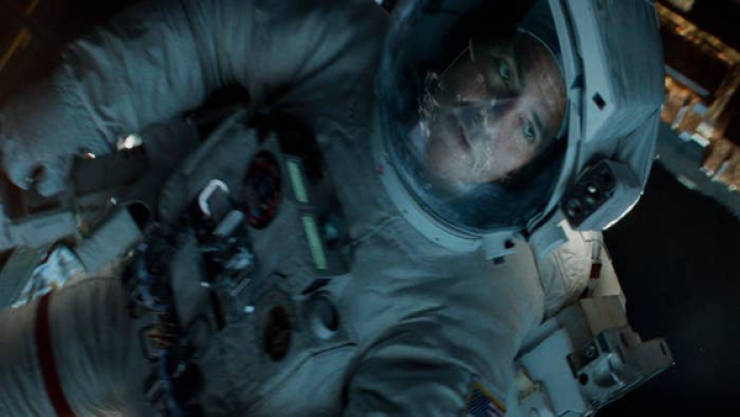 "In Gravity (2013), as Kowalski flies very close to the camera, astronauts holding a movie camera and boom mic appear to be reflected in his helmet visor. This is an in-joke by the movie’s director, Alfonso Cuarón. The ‘reflections’ were added with CGI to make it look like the scene was actually filmed in space." 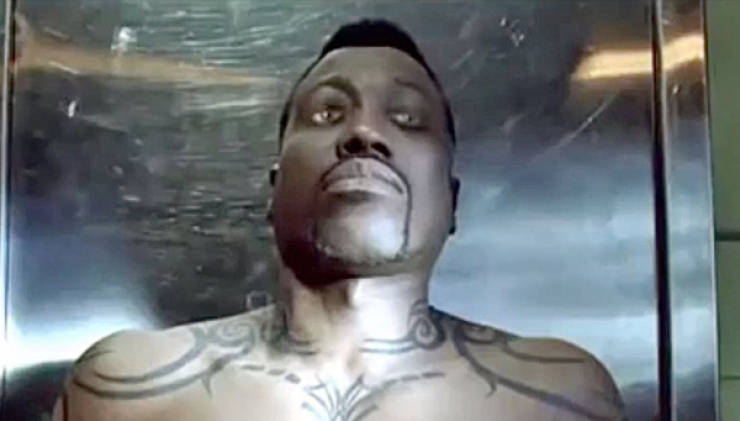 "In Blade:Trinity, Wesley Snipes had difficulties with the production team and at one point was even unwilling to open his eyes for the camera. Leading to this morgue scene where they had to CGI open eyes for him."

"The hotel fight scene in Inception (2010) was done with similar camera trickery as the ceiling dance in Royal Wedding (1951)." 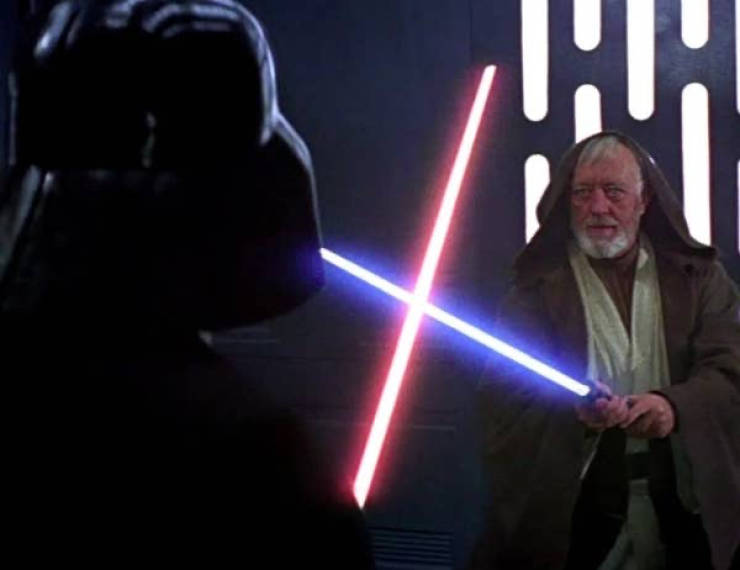 "For the first Star Wars movie, Star Wars: Episode IV – A New Hope (1977), our immediately recognizable lightsaber sound was discovered by mistake. While carrying a tape recorder with a broken mic cable where the shielding had come off, the sound was recorded as someone walked by a television. The sound is the electrical feedback from the television’s tube."

"In Captain Marvel (2019), when Monica Rambeau is changing the color of Carol Danvers’ suit, she first chooses a combination of red and gold, which are the same colors as DC’s Shazam, who was previously known as Captain Marvel." 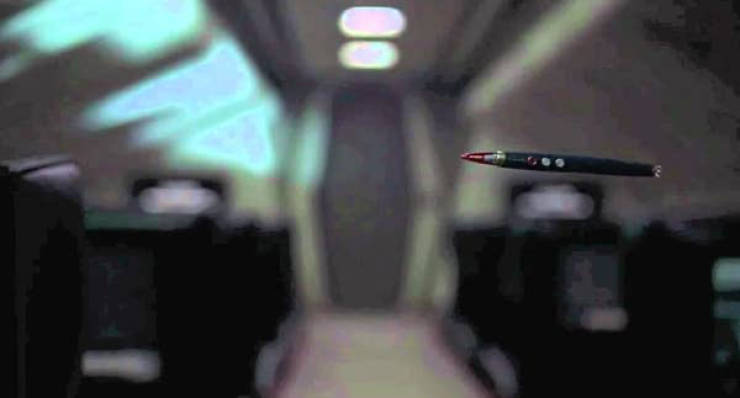 "In 2001: A Space Odyssey (1968), director Stanley Kubrick made a floating pen using a plexiglass in which he taped the pen with a double-face tape. For 1968, it was something impressive to do without any special effect." 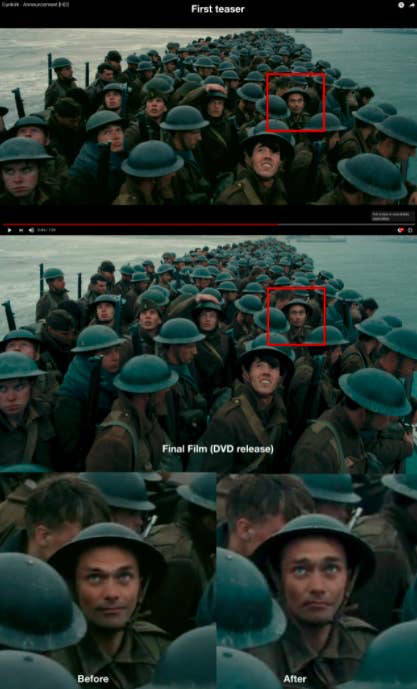 "The infamous smiling extra from the Dunkirk (2017) teaser was CGI-ed to look serious/scared in the final film." 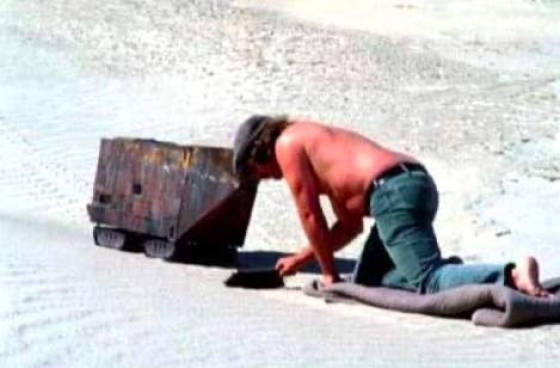 "The Sandcrawler in Star Wars: Episode IV – A New Hope (1977) was in fact only 2 feet long, but clever camerawork created the giant scale." 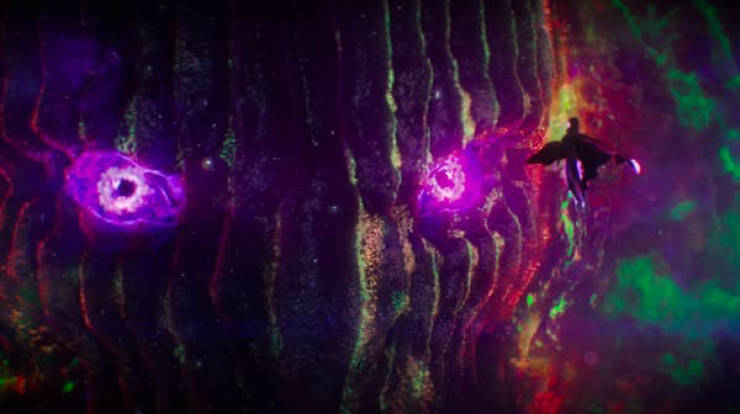 "In Doctor Strange (2016), Benedict Cumberbatch played the protagonist and also the main antagonist, Dormammu. He provided both the voice and the performance capture for the CGI face of Dormammu." 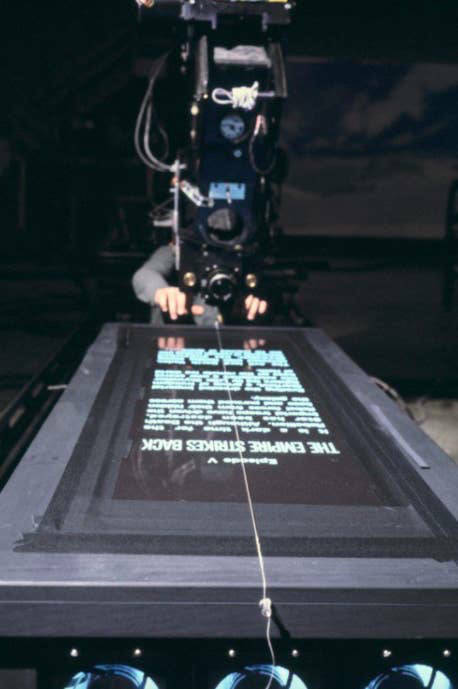 "For the famous Star Wars opening crawl in the original trilogy, they used a camera moving along a physical model slightly tilted. It was difficult and time-consuming to get a smooth scrolling effect, and they needed one for each language (German, French, Spanish, etc.)."

"In Blade Runner (1982), Ridley Scott and Jordan Cronenweth achieved the famous ‘shining eyes’ effect by using a technique invented by ‘Fritz Lang’ known as the ‘Schüfftan Process’: Light is bounced into the actors’ eyes off a piece of half-mirrored glass mounted at a 45-degree angle to the camera." 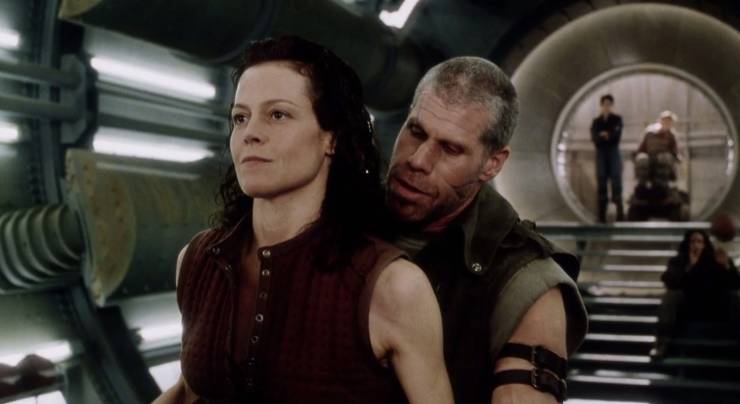 "In Alien: Resurrection (1997), Sigourney Weaver practiced for two weeks for the basketball scene and made the shot in one take. No camera tricks or CGI were used in the shot." 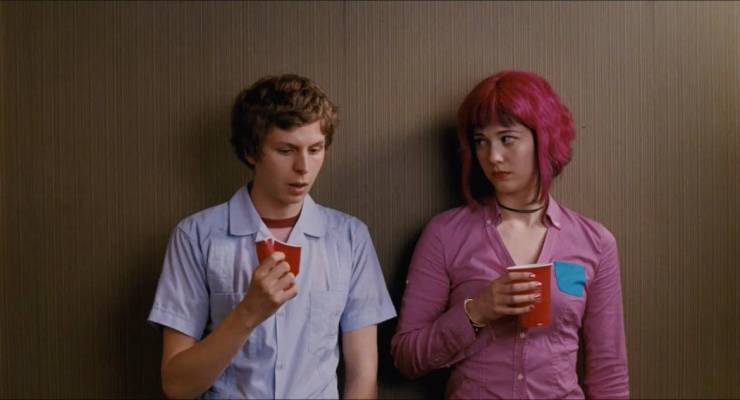 "In Scott Pilgrim vs. the World (2010), the scene where Scott throws a parcel over his shoulder into a bin is real. In a film with so much CGI and SFX, director Edgar Wright wanted the throw to be real for the authenticity. It took him 33 takes." 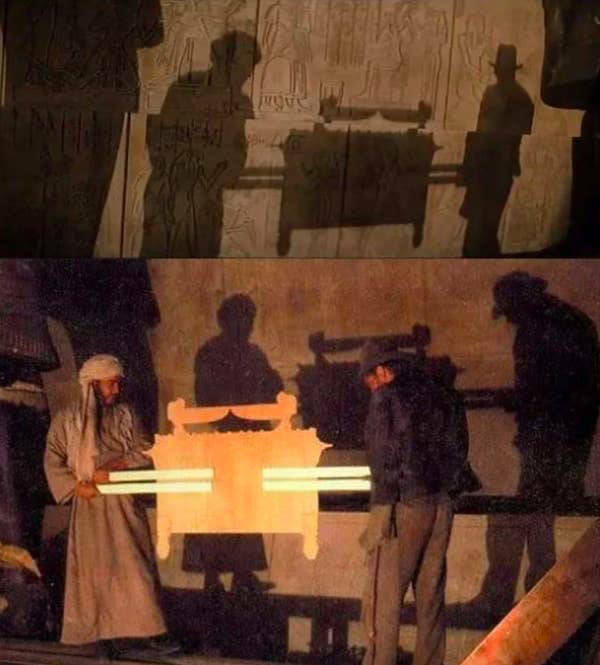 "Have you ever wondered how the shadow of the ark was made in Raiders of the Lost Ark (1981)? It makes you laugh how such a simple thing leads to the final climax with some of the best visual effects ever made."

"For the entire final scene in Iron Man 3 (2013), a CGI Robert Downey Jr. was constructed by face-capture and VFX, imposed onto a body double, because Downey Jr. was injured in shooting." 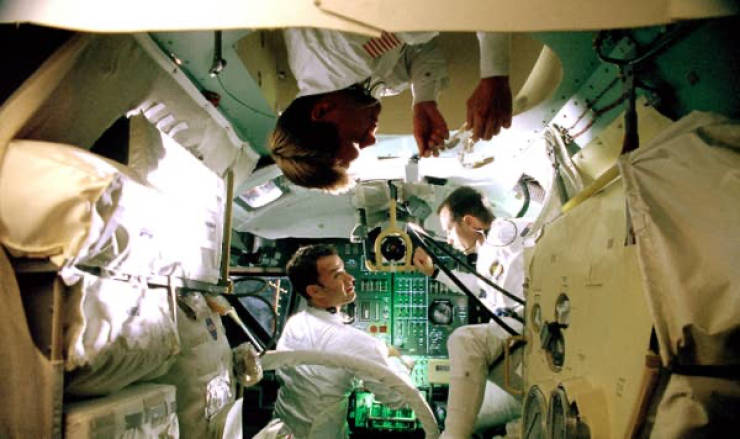 "To film certain scenes for Apollo 13, cast and crew ended up being weightless for a total of nearly four hours, through 612 flight parabolas. That is more time being weightless than the majority of astronauts do before going into space." 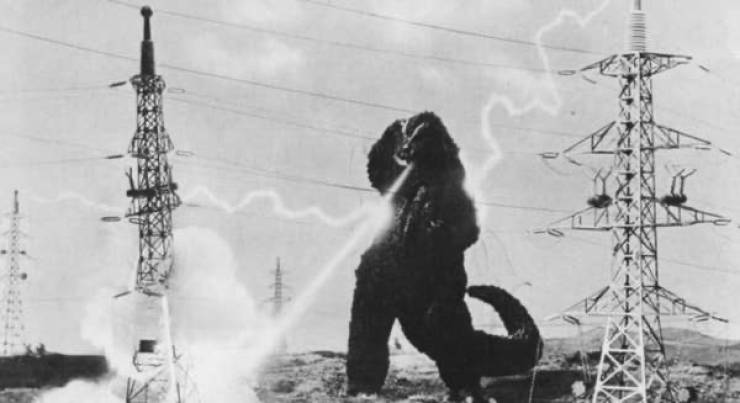 "In Godzilla (1954), the electrical towers that Godzilla melts with his radioactive breath were actually made of wax. The special effects crew melted them by blowing hot air on them, as well as shining hot studio lights on them for the white-hot effect."

"The waterfalls on the planet Naboo in Star Wars: Episode I –The Phantom Menace (1999) were created by filming a stream of salt, rather than using water or CGI." 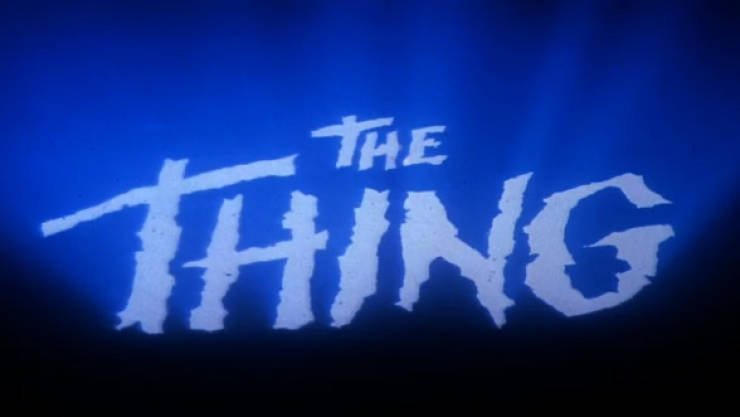 "In The Thing (1982), the title effects sequence was made using an animation cell with “The Thing” written on it placed behind a smoke filled fish tank which was then covered with a plastic garbage bag. The burning effect was created once the bag ingited."

"In Hot Fuzz, the editors missed a scene during a car chase, and you can see the green screen behind Simon Pegg and Nick Frost." 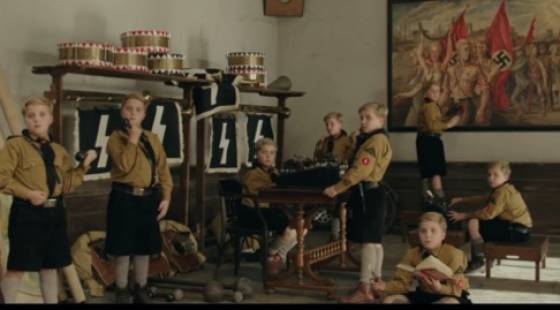 "In Jojo Rabbit (2019), the Hitler Youth clones were played by the younger identical twin brothers of Roman Griffin Davis (who played Jojo) in order to streamline the CGI process." 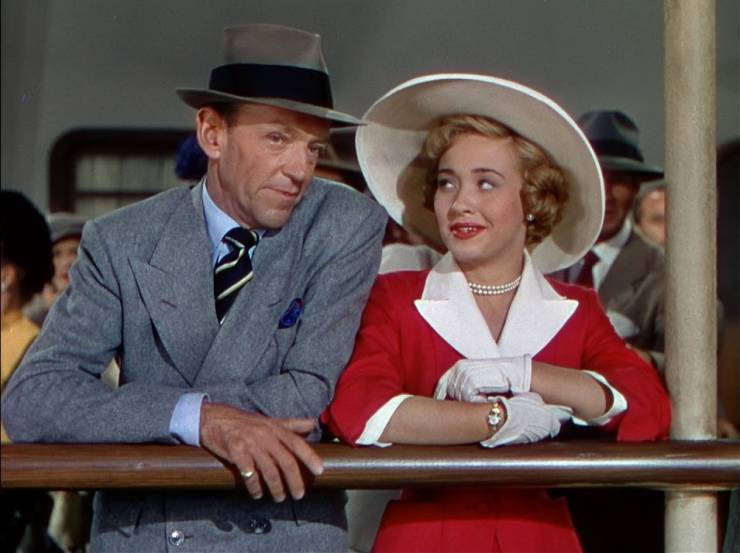