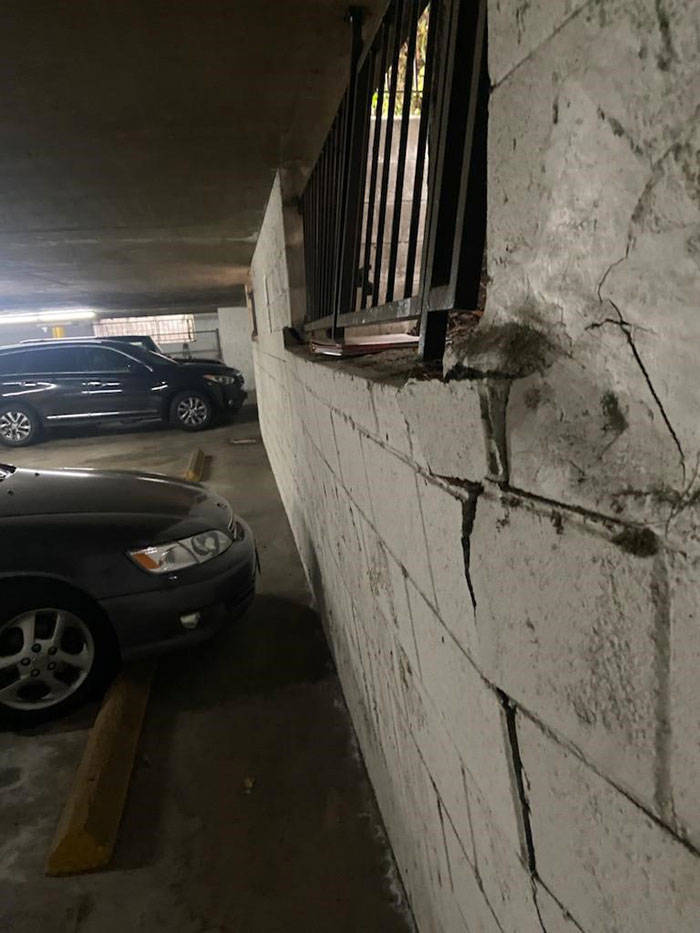 "I don't know about you but I would want to park the furthest away from this wall..." 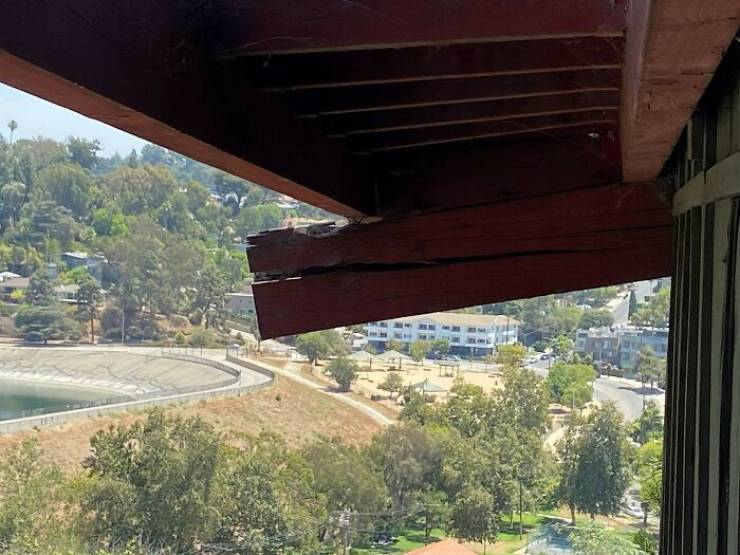 "Anyone want to step foot on this balcony?" 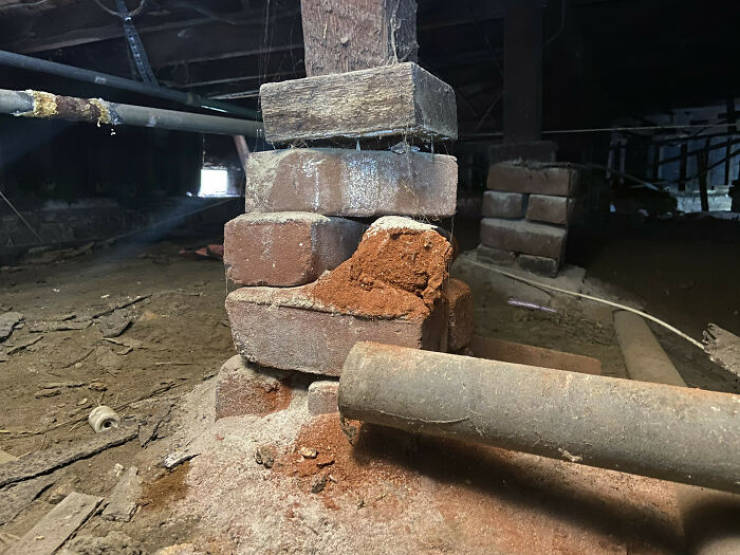 "The brick and mortar piers are literally turning into dust. Not something you want holding up your entire house." 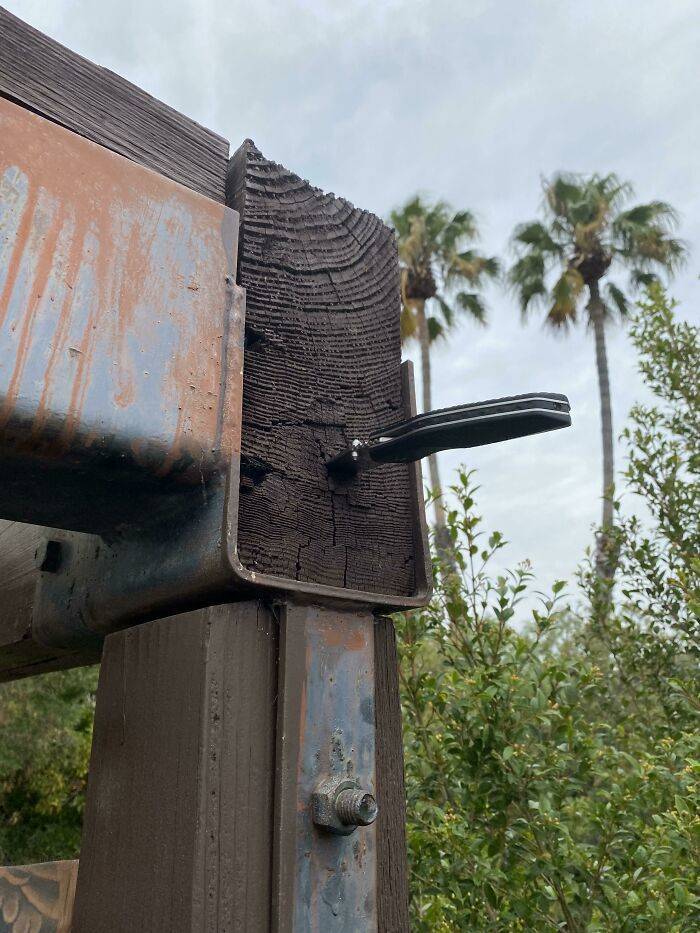 ""How do you know if your wood is rotting?" This is how." 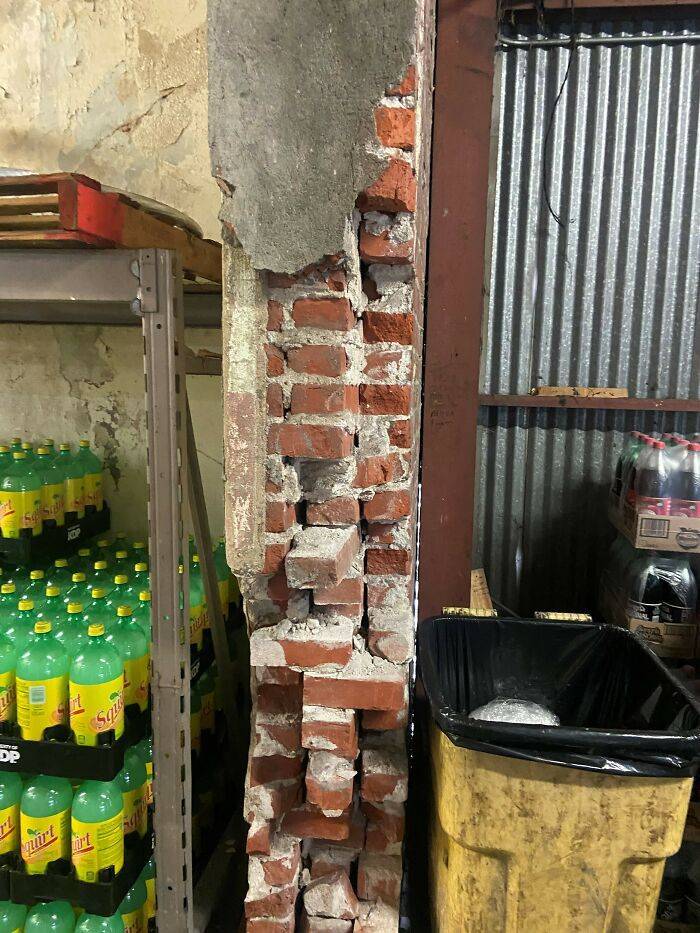 "I guess they wanted an open floor plan? They took the brick wall separating the two rooms down. No permits, no contractor, just a man and his trusty hammer."

"You are looking at the worst framing rot that we have ever come across on an inspection.

You can't even touch this wall without the whole thing falling apart. Just look at the insulation around it!

You know it's really bad when the studs begin to look like fractured vertebrae." 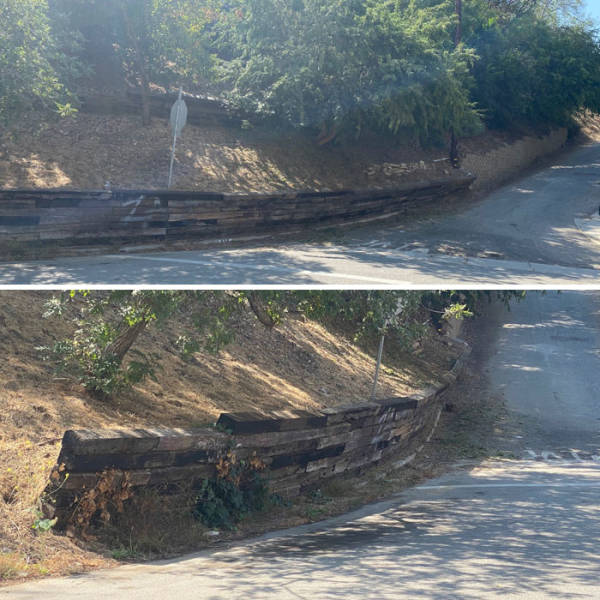 "Another failing railroad tie "retaining wall" that should be replaced soon. You can see how far it has begun to lean towards the street." 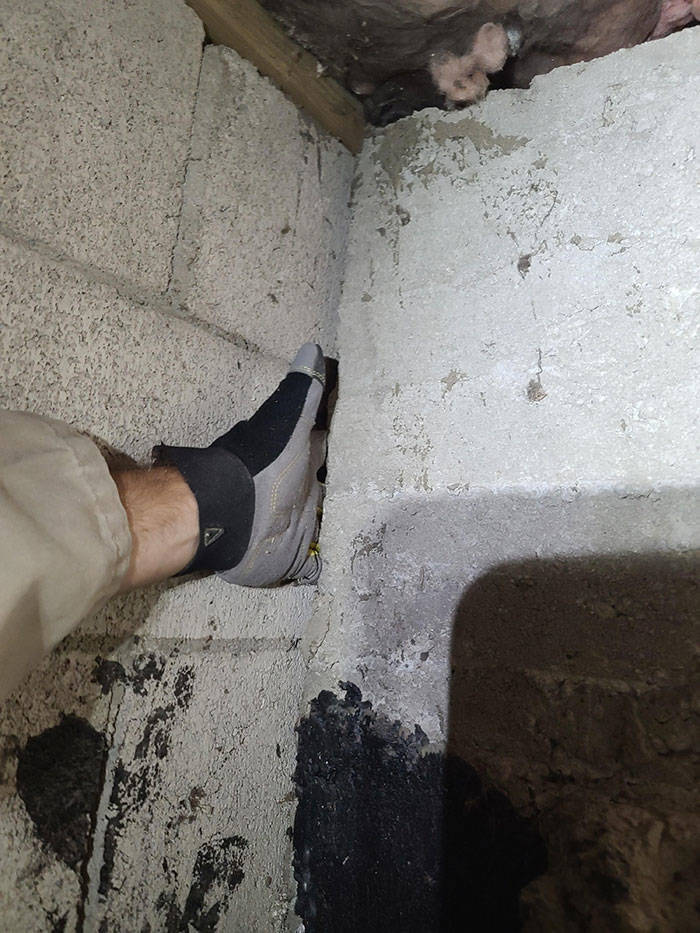 "There should not be a space here. Never good news when you see stem walls separating at the corner." 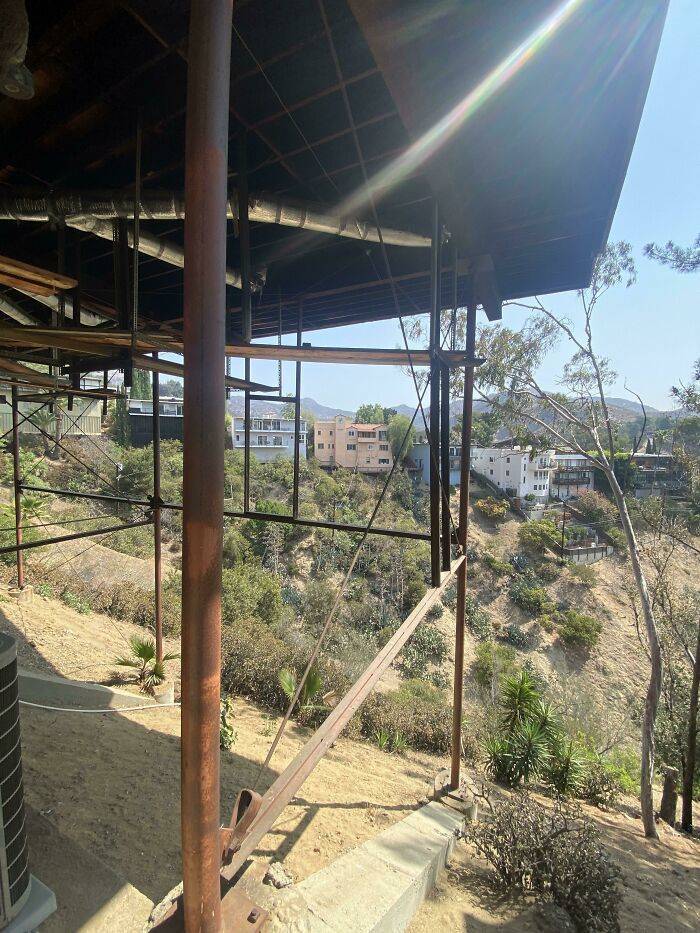 "This is a pretty wicked stilt home we inspected this past week. Retrofitting these for earthquakes is one of our many specialties." 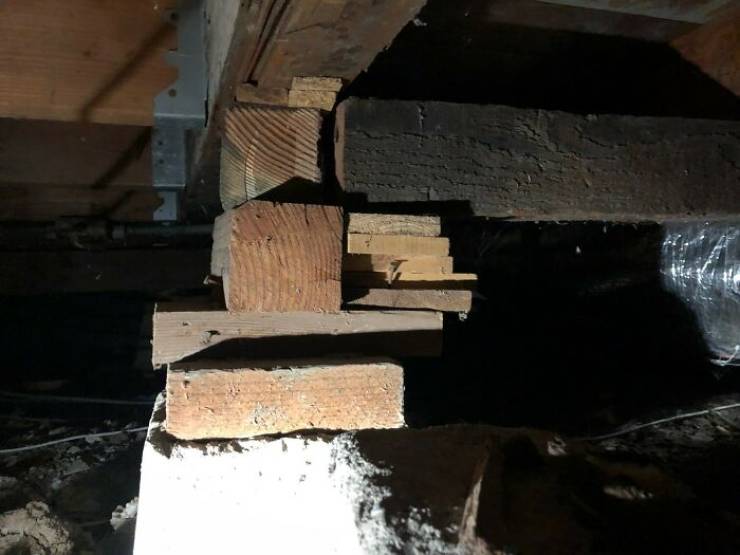 "I think one more shim should do the job." 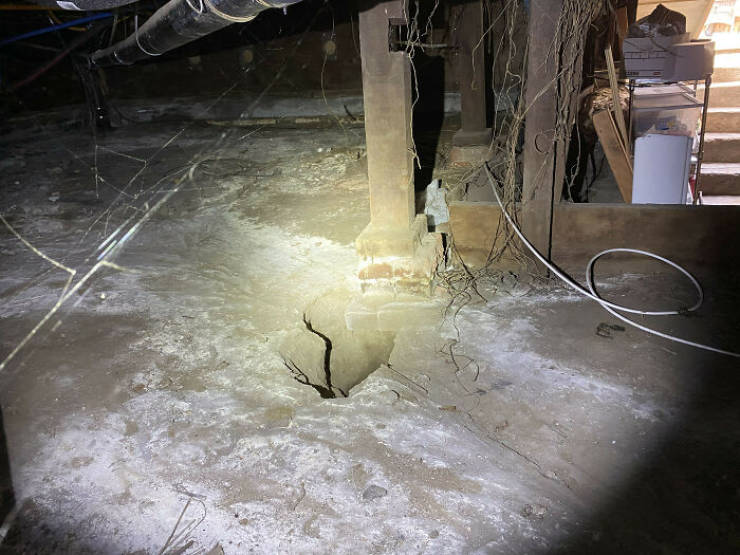 "Here is a brick pier that's sitting dangerously close to a big hole in the ground. Something tells me the homeowner will start to feel some dipping in the floors soon!" 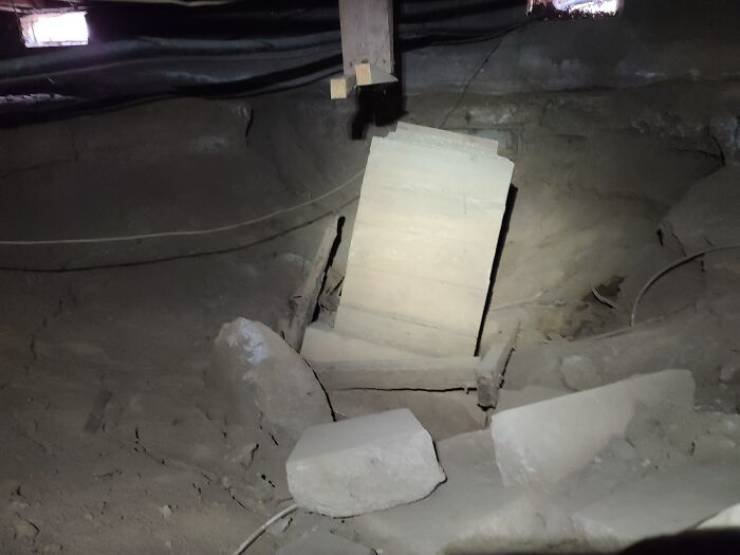 "Here's a concrete pier practicing for its role as the Leaning Tower of Pisa." 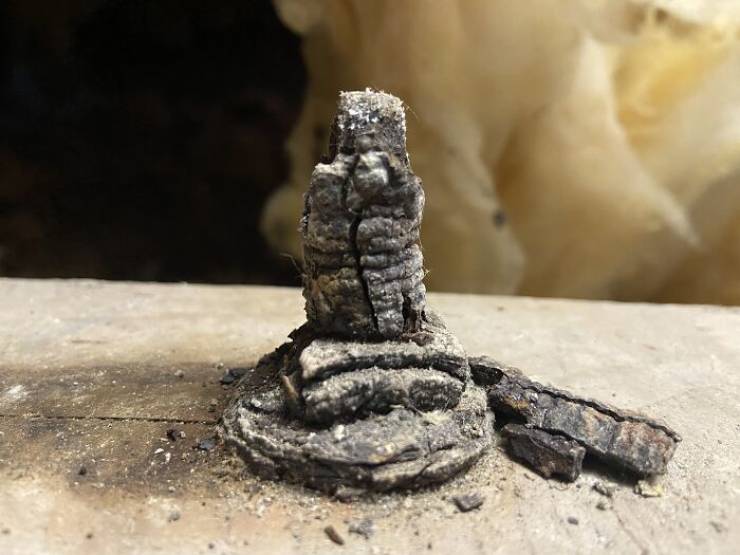 "We weren't able to perform a proper torque test on this bolt... but something tells me we didn't have to." 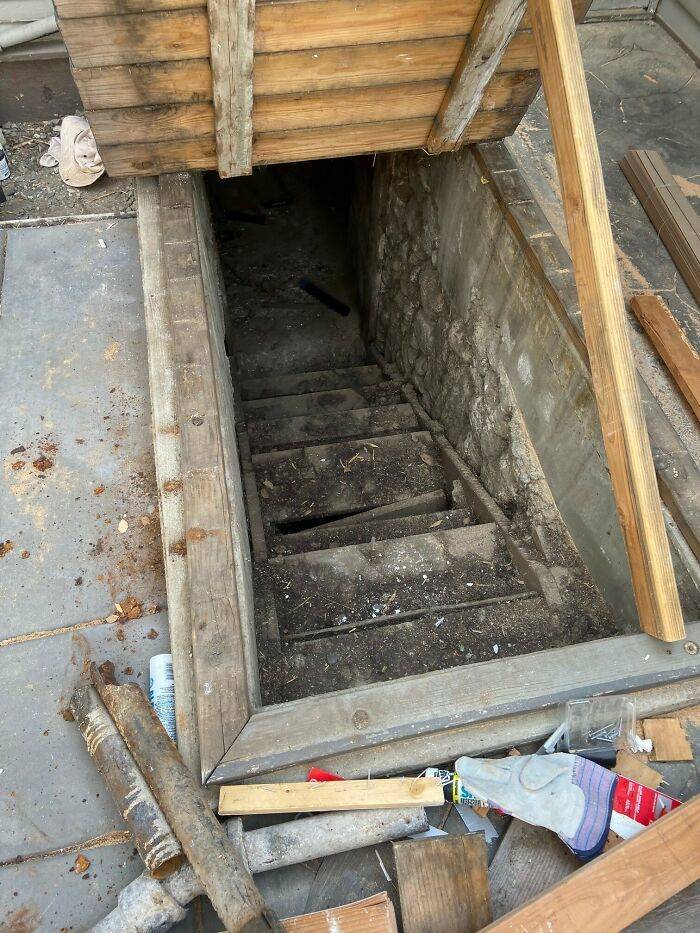 "It's always nice when I don't have to crawl into a crawlspace but, these stairs are pretty frightening." 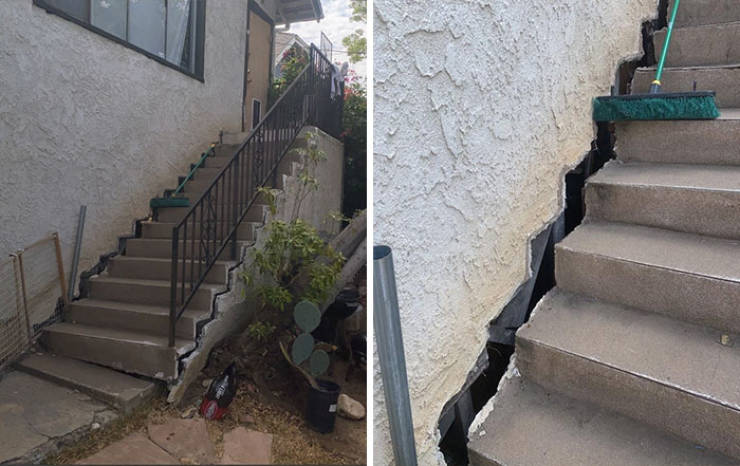 "Whole lotta issues with this...

Just slightly separating from the structure..." 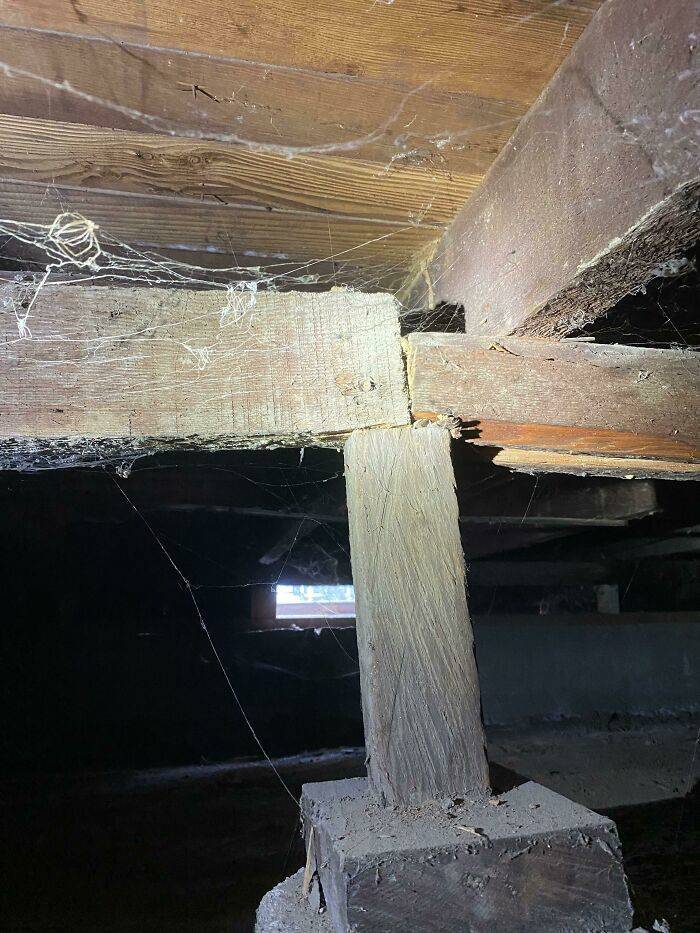 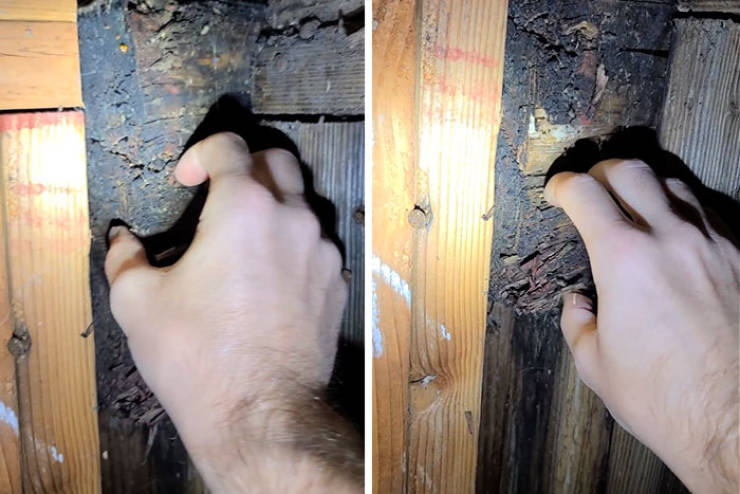 "These photos are from a home we inspected that was built in 2009. You would think that because it's newer construction the home would be a good shape. Well, this should give you a better understanding of how damaging water leaks can be if they go undetected. Nearly the entire subfloor is rotted from water damage and multiple joists are hanging down from rot.

It took less than a decade for this to occur, so not all homes with significant damage are 100 years old.

Large puddles of water had to be avoided during the crawl as well. (Image 3)

Here you can see two joists hanging down after snapping in half from water damage. (Image 4)

This is probably the nastiest of all the damage. That is not paint. It's possible that the entire subfloor needs to be replaced. (Image 5)" 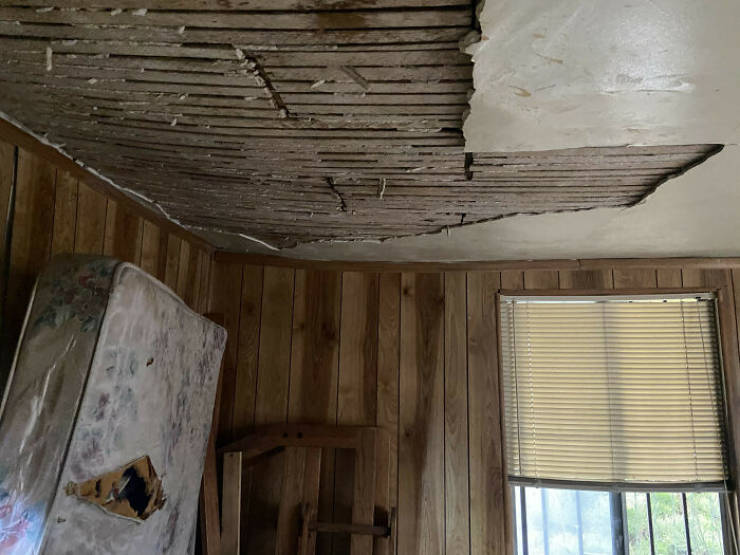 "The old lathe and plaster ceilings are sagging, looking like it's about to collapse." 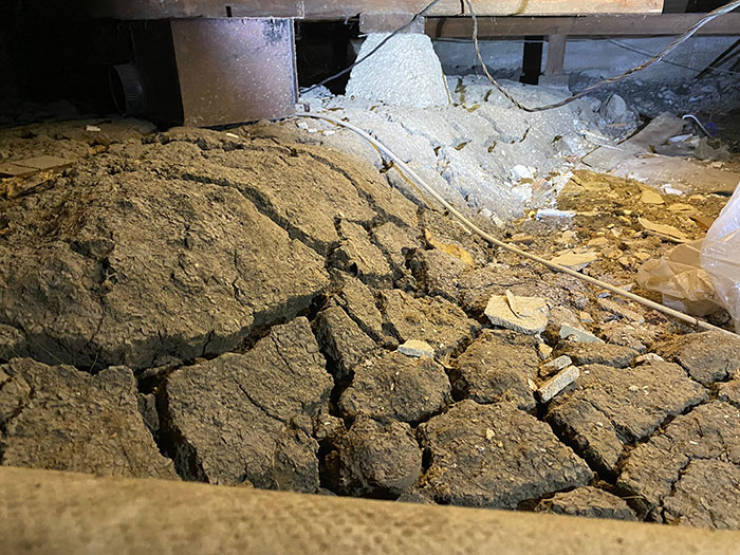 "Here we have some expansive soil, clearly affecting the foundation already." 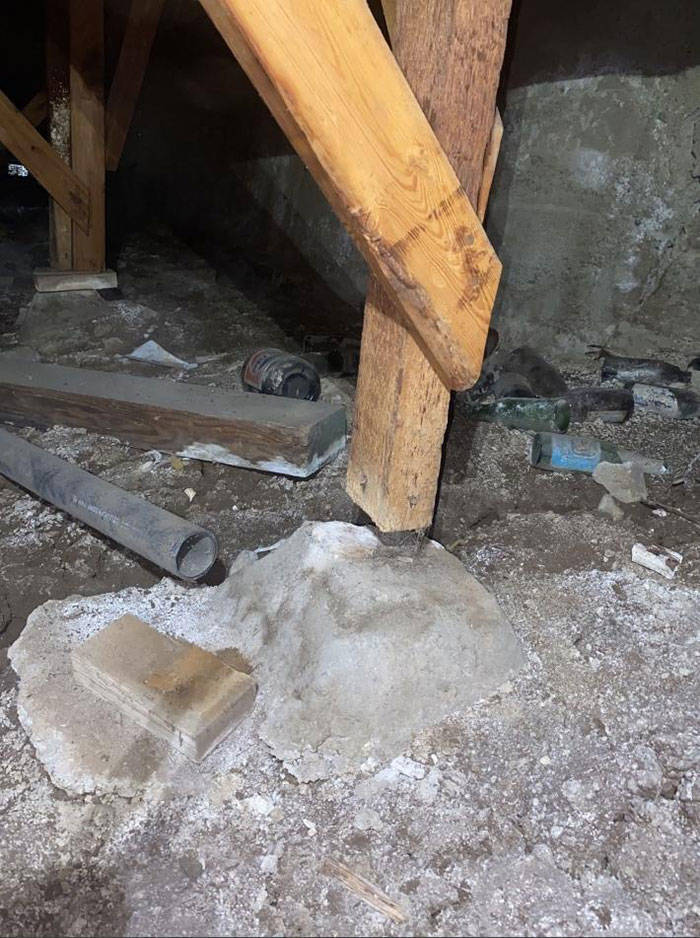 "And for my next trick I will levitate this post..."

"These photos are of severe spall damage underneath an old concrete structure in Los Angeles. This kind of structural flaw occurs after water penetrates the concrete, causing the steel to rust and expand. This breaks apart the concrete and reduces the strength of the area or possibly the entire structure.

We shared these because we wanted owners and managers of these types of buildings to be able to recognize the potential damages that could compromise their structures.

Recently we have been inundated with calls from building owners who are fearful that their buildings could collapse like the condos in Miami. The issues seen in these photos are similar to what was discovered in Miami, among other things.

Whether it's in the ceilings, walls, floors, or columns, and either in the interior or exterior of the structure, these are all signs of significant structural flaws and should always be approached promptly with properly engineered solutions." 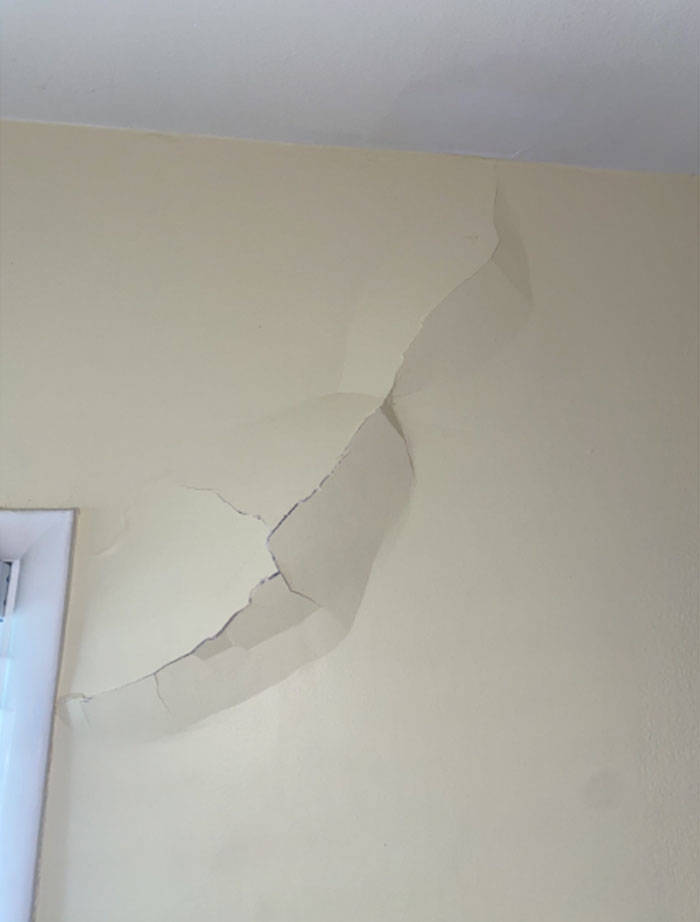 "A customer called us in because of this crack running off the corner of their door, which is never a good sign and points in the direction of foundation problems." 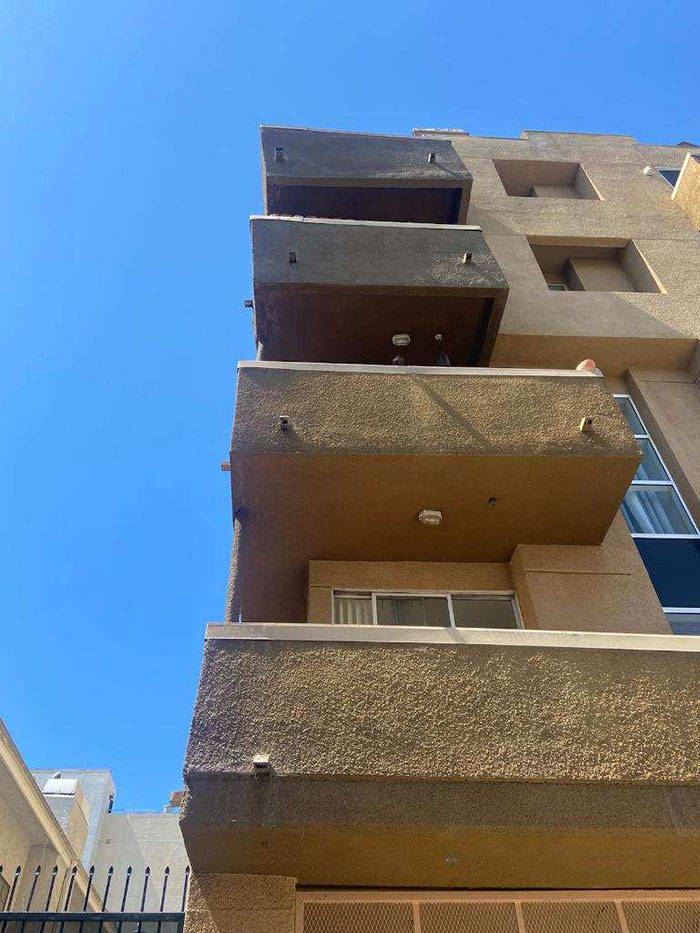 "These balconies have seen better days. As you can see, the wood framing of these balconies is experiencing some deflection. This is why The Balcony Bill exists. The Balcony Bill, formerly known as California Senate Bill 721, was signed into law back in 2018. This bill requires the inspection and possible repairs on all balconies, decks, and stairs that rely in whole or in substantial part on wood structural support in multi-family residential buildings with three or more dwelling units." 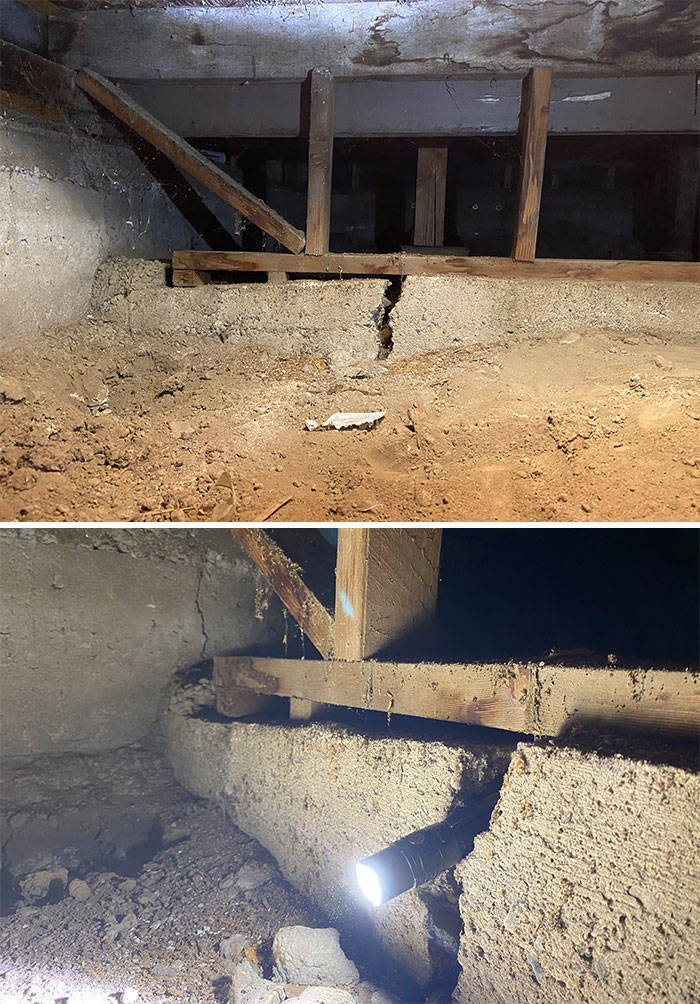 "This is what no steel in the concrete and moving soil will do to your foundation.

Someone placed a few shims in there to level it all out." 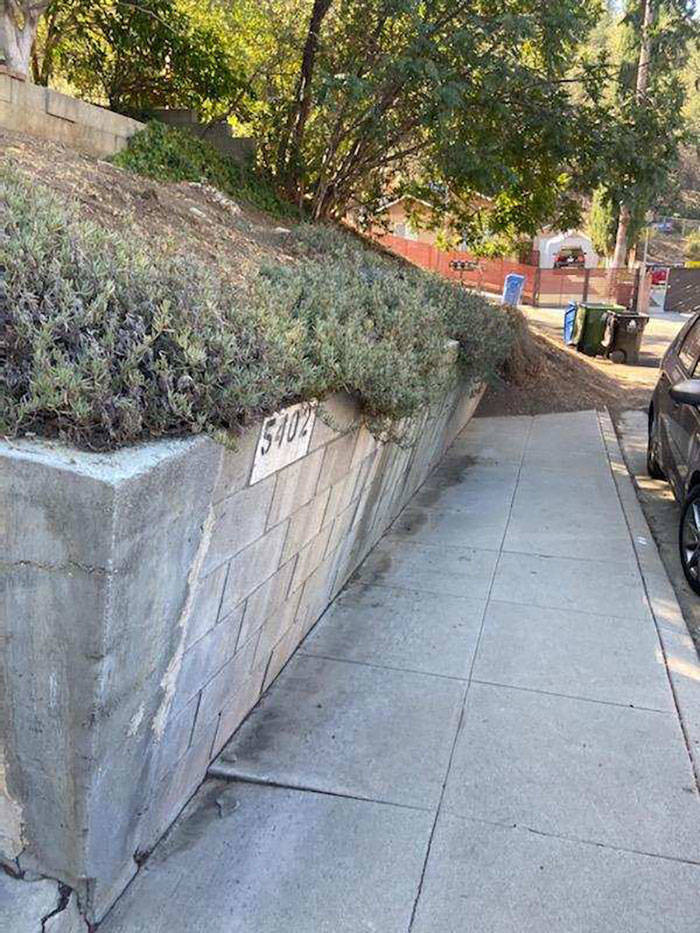 "This failing retaining wall won't last much longer. Some movement over the years has taken place and has caused the wall to lean into the sidewalk." 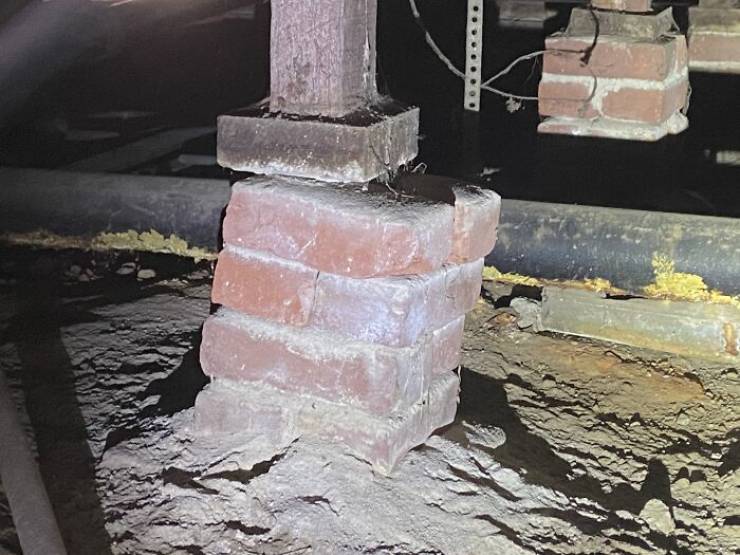 "Some of the piers weren't even in contact with the posts." 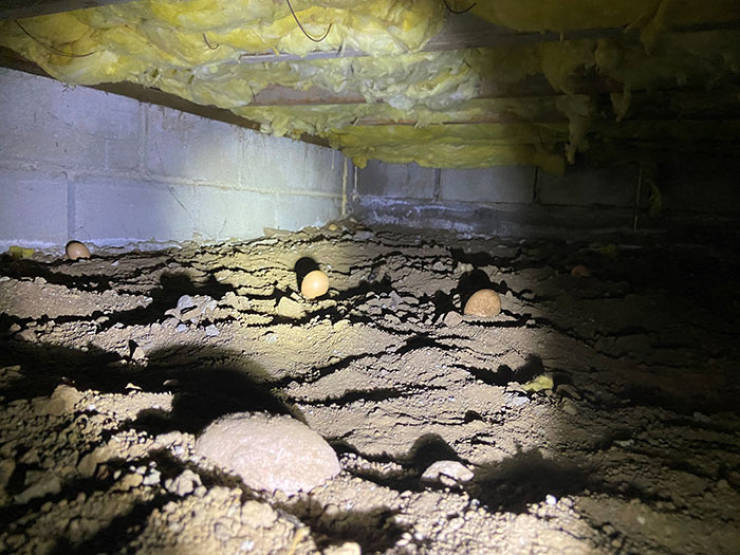 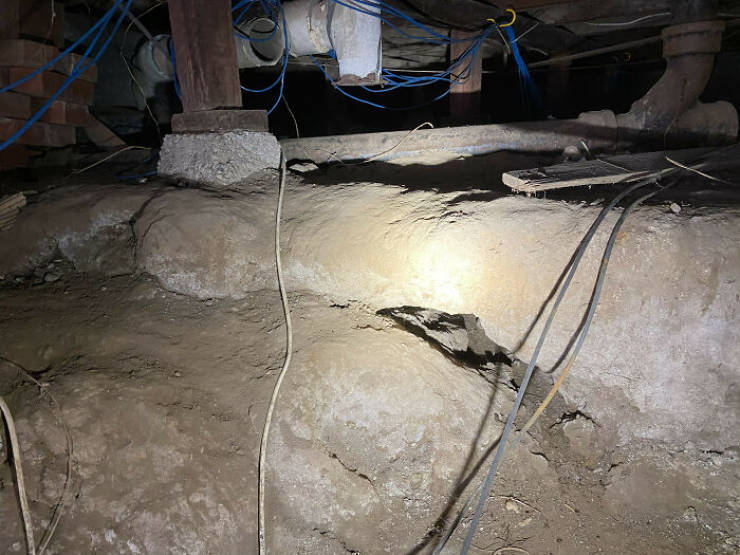 "There appears to be a cave system leading down underneath this home's foundation."

"Here is yet another brick foundation we inspected this past week. We want to get as many of these replaced, or at the very least, sistered before the next major earthquake in LA.

The external foundation walls of this building are bowing, and many of the bricks are falling out of place. (Image 2)

Not only that, but the framing is in really bad shape and a lot of it needs to be replaced as well. (Image 3)" 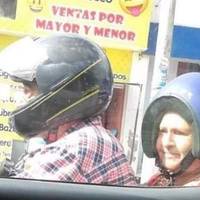 Andrea 1 year ago
In Mumbai India, a merchant rented an entire ground floor of an aparment complex. the building is 7 floors, concrete & blockwork. He simply removed all the walls and some pillars in the ground floor. Whole building collapsed, killing several people.
Reply
2 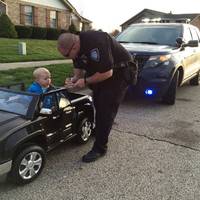