When Red Flags Are Obvious On The First Date… (18 GIFS)

"Not mine but I had to pick up my friend from the side of the road because her date picked her up, then pulled over on the side of the freeway to “see what was in the forest”. She got out of there and never heard from him again."

"We were playing mini golf and he was losing so he screamed, all red faced, and hit the ground multiple times with his golf club. He asked me out a second time and I said no. He claims he didn’t know what he did wrong."

"When his wife had some very ugly things to say right before our date.

He told me they were separated and in the process of a divorce. They were very much still together."

"For me it was when she mentioned that she was not single but did, in fact, have a husband but it is okay because he has been in jail for about 5 years and will not be released for at least six months."

"Not my date; just one I witnessed while sitting in a cafe with my laptop working. They both (maybe 25) look normal and sit down with a coffee. He buys and she seems happy enough.

He then proceeds to talk like a non-stop firehose for the next hour. I am not exaggerating if she didn’t get to inject 8 consecutive syllables in at any point. It was a verbal brain dump of his entire fairly tepid life.

This was a situation where more than one stranger looked at me with their back to the couple and made faces or mouthed something like “Holy [email protected]#t.”"

"He showed up to my house three hours later and stood outside my door for an hour and a half, trying to coerce my roommate to let him in, saying he had forgotten something inside. She didn’t as I was asleep and she thought it was dodgy.

I never told him where I lived."

"She had a litter box with a great pyramid of cat [email protected]#t in it. The smell punched me in the face. I immediately turned around and got in my car. I have a cat too, but I take care of her. That’s just nasty."

"The restaurant had closed & it was clear the staff wanted to go home. I had been trying to leave since 10 minutes before they closed to be a courteous person, but he was not budging. It just gave me the ick"

"A guy got mad that I walked on the other side of a tree from the side he walked on. Like we were walking down the sidewalk, a tree was in the way, he went to the left of it and I went to the right of it. He was mad I didn’t go left with him. I asked why he didn’t come to the right with me if it was so important that we be on the same side. He did not like that response and I ended the date briefly thereafter."

"Her car was full of garbage up to the windows."

"Went out with a guy I met on match on a Saturday night. I knew he was a widower and during the date I asked him when his wife had passed. He said Monday."

"It was the coldest day of winter, and the guy wanted me to take off my coat so he could make sure I wasn’t fat."

"He took my phone off of me and when I wouldn’t give him the passcode I had to physically wrestle it off of him.

First date. I wish I was joking."

"At the risk of outing myself, I was the one who showed the red flag.

Took a girl on a date and completely forgot her name to the point where I had to eventually ask her. We never spoke again after that."

"Canceling the date to go out on a date with someone else…. To the same location." 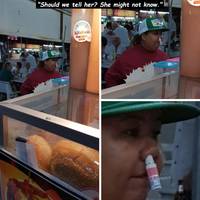 Bertha 5 month s ago
These cases can't be real... 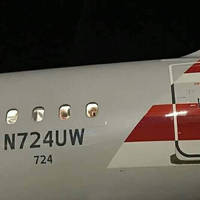 Penny 5 month s ago
Bertha, Wtf yes they can. I've experienced a couple of very similar situations. Why tf would you say they can't be real?
Reply
-1 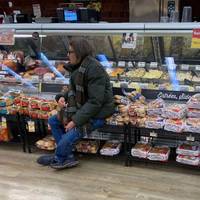