One of the bridesmaids in the movie about Queen Victoria is Princess Beatrice (and they do look alike). 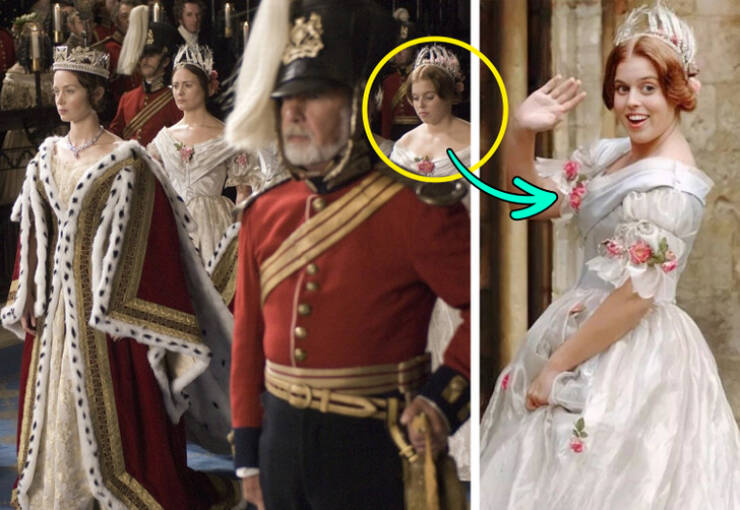 In The Young Queen, she appears in the role of Princess Beatrice. Not only is she a member of royalty making a film debut, but she is also said to bear a physical resemblance to Queen Victoria, the film’s main character.

The dreams of 13 Going on 30’s main character came true, and several elements prove it. 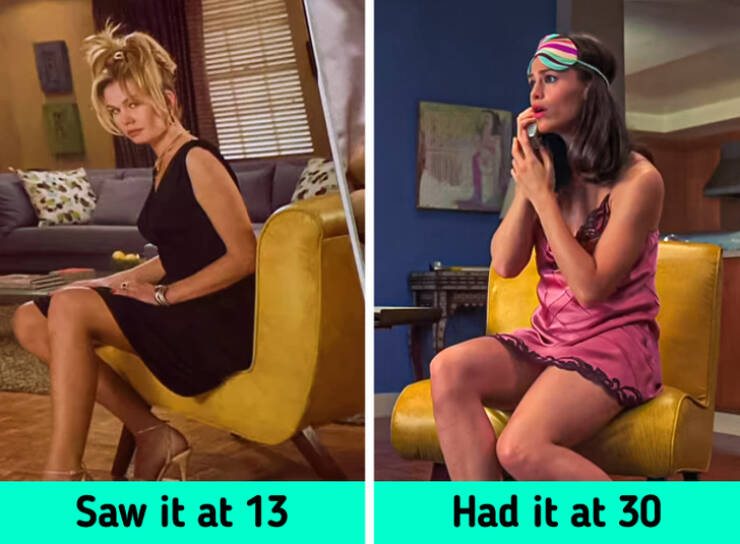 In one of the movie’s first scenes, the 13-year-old protagonist looks at a magazine with the keywords of what she wants to be in her adulthood: “30, flirtatious and prosperous”. Later, not only does the magazine’s message come true, but the same magazine inspires the decor of Jenna’s apartment when she’s 30.

There’s a reference to Pretty Woman in The Princess’s Diaries. 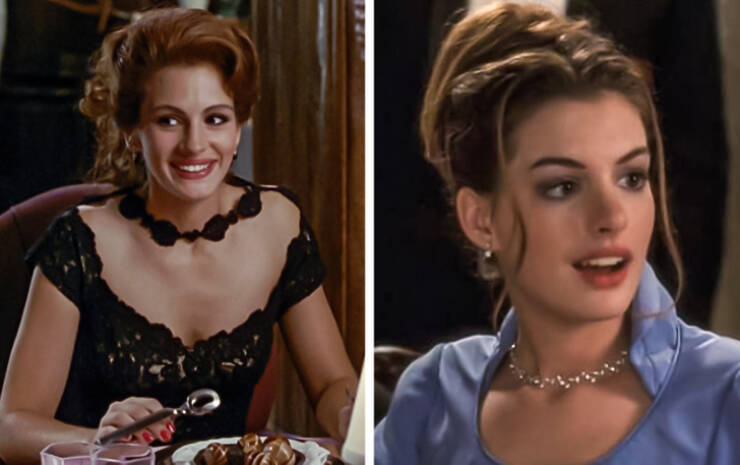 In Pretty Woman, there’s a scene where Vivian (Julia Roberts) goes to dinner at an elegant restaurant. When she accidentally knocks over a snail, a waiter covers her sheer clumsiness by saying, “It happens all the time.” Mia (Anne Hathaway) in The Princess Diaries hears the exact phrase from the same waiter (Allan Kent) when she breaks a glass.

La La Land has a reference to a classic film. 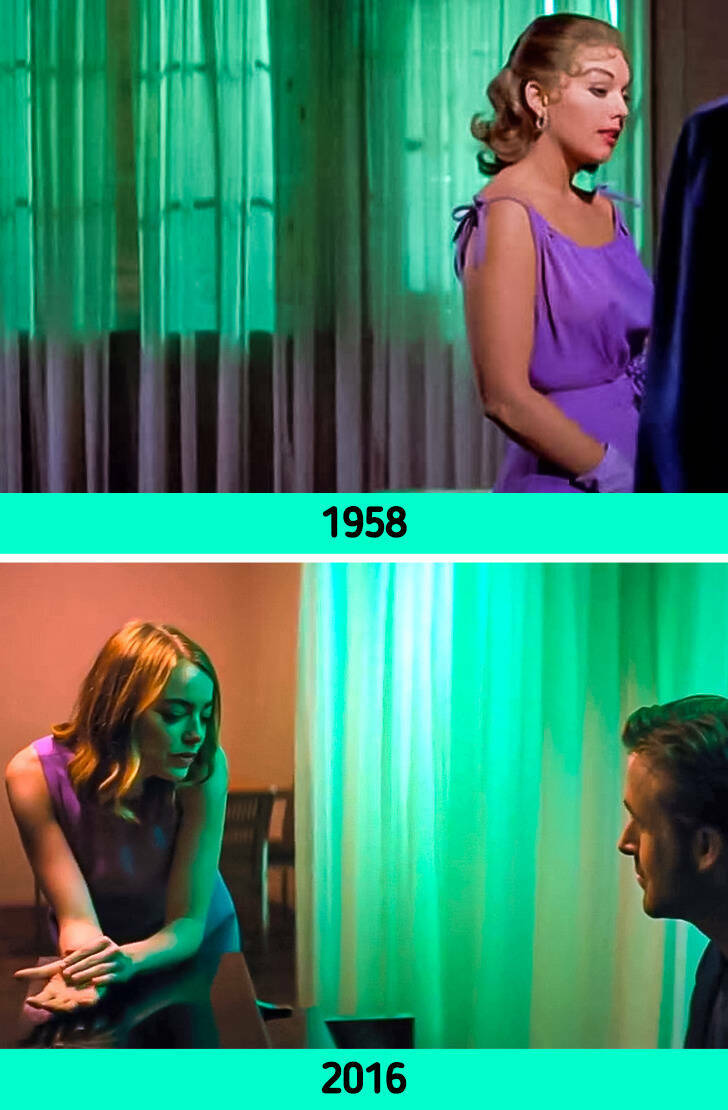 The scene in which the leads sing City of Stars in the apartment under a dim green light was created after director Damien Chazelle watched Alfred Hitchcock’s Vertigo the night before. Even at the last minute, he decided that Emma should wear a purple dress like Novak’s in that cinema classic.

The book “M.J.” reads may have a special connection to Peter Parker. 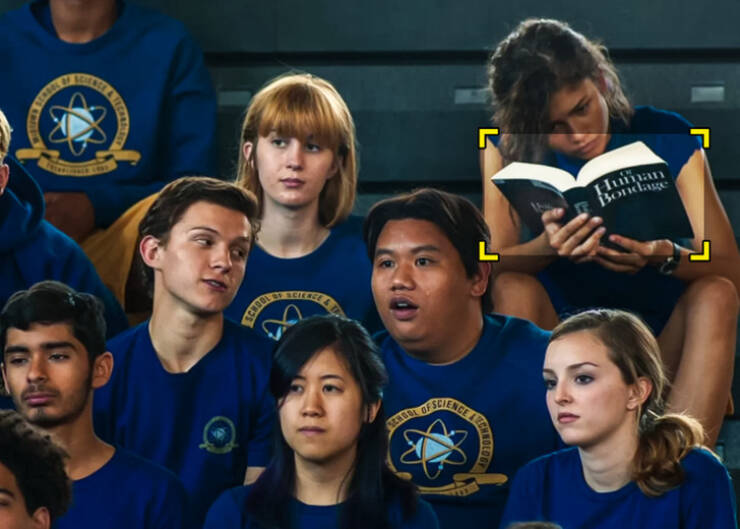 The book MJ reads in Spider-Man: Homecoming, Of Human Bondage (1915) by W. Somerset Maugham tells the story of an orphaned boy who is sent to live with his aunt and uncle, just as Peter Parker is.

One of the extras in Titanic is a historical consultant who helped the director. 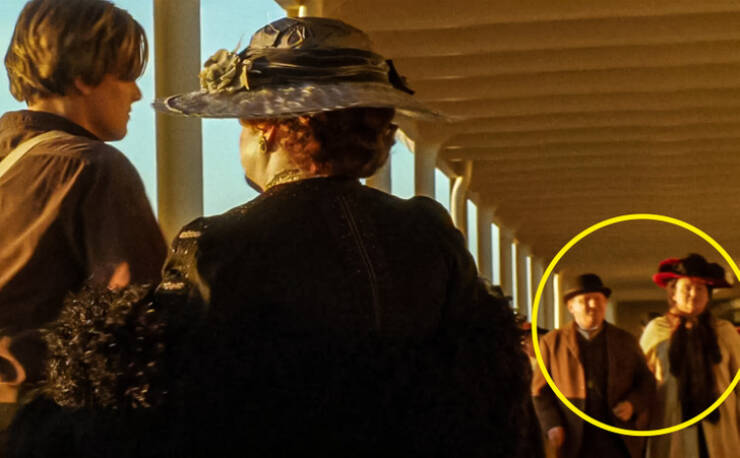 Historian Edward Kamuda, as a member of the Titanic Historical Society, served as a consultant on the historical facts in the film and appeared briefly as an extra in the scene where Jack and Margaret are walking on deck.

The shadow on her face reveals her true identity. 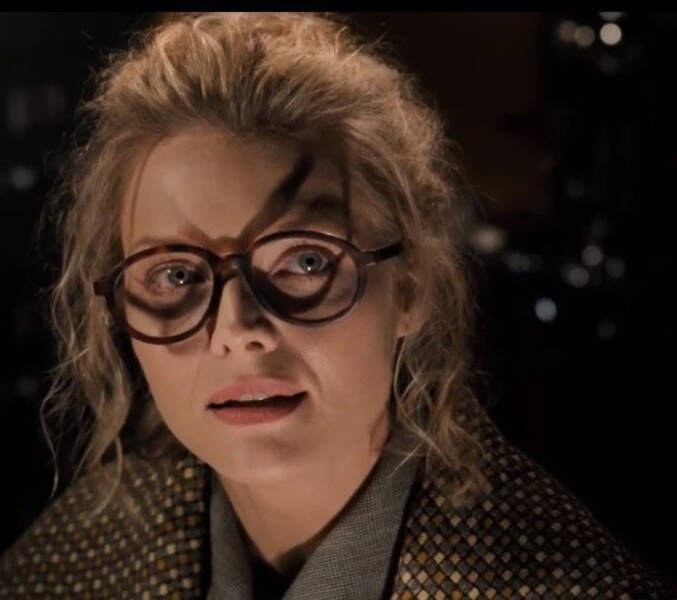 In Batman Returns (1992), the shadow of Selina’s glasses (played by Michelle Pfeiffer) cast the mask of Catwoman on her face.

Some costumes in The Conjuring match. 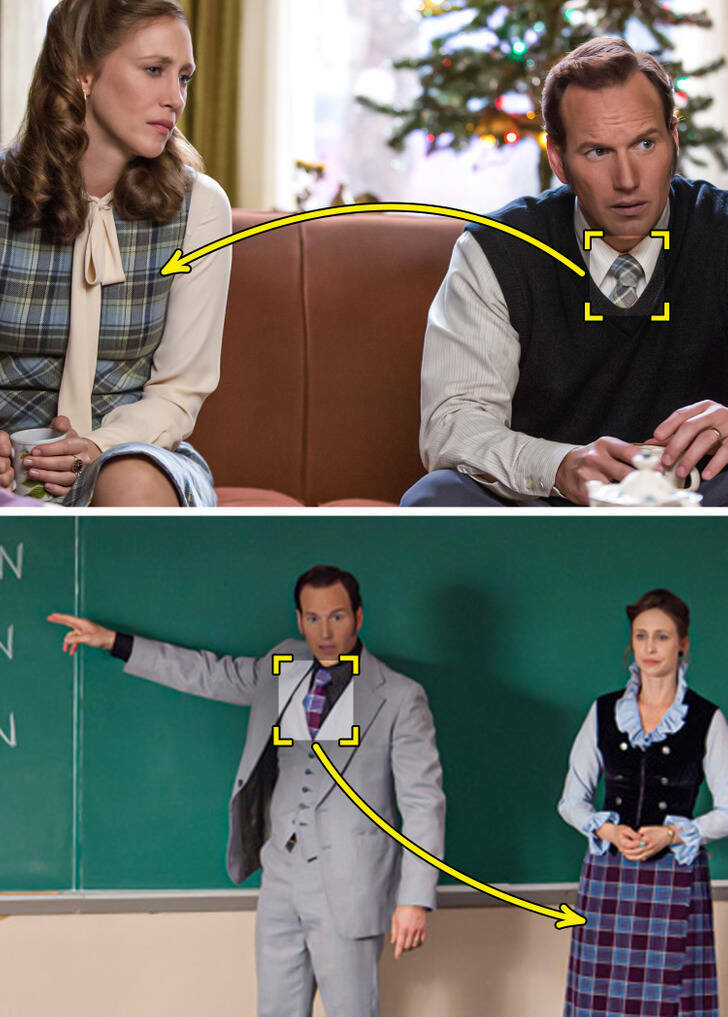 In The Conjuring, costumes worn by the couple Ed and Lorraine Warren have the same tone and pattern. For example, Ed’s tie and Lorraine’s skirt. Maybe they’re meant to reflect the connection that the couple had.

At the beginning of Pride and Prejudice, Elizabeth reads the end of the story. 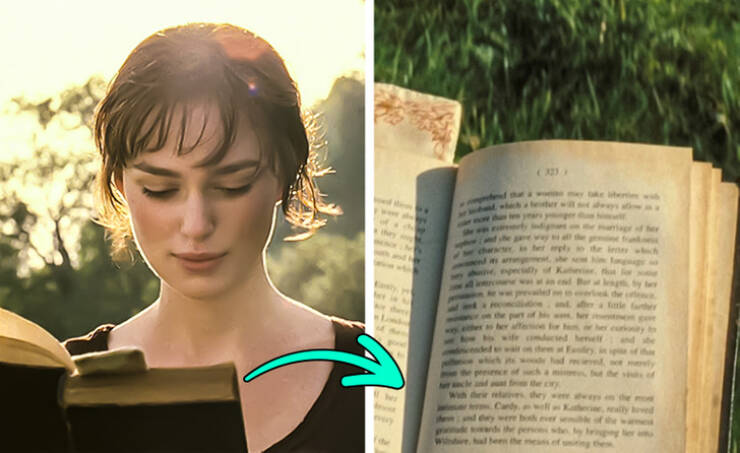 If you take a closer look at one of the movie’s first scenes, you can see the protagonist walking and reading the last chapter of the book on which the story is based. However, the characters and places in the book have different names. So in a way, Elizabeth’s character was reading her own ending at the beginning of the film. 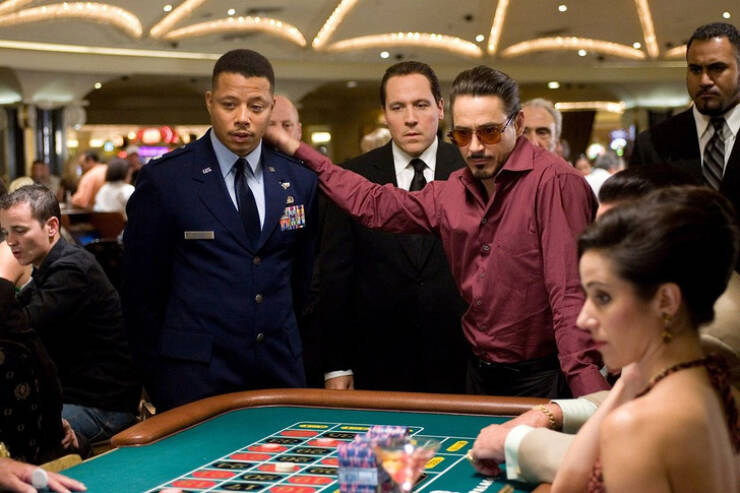 The music that plays in one of the scenes of Iron Man (2008), where we see the superhero in a casino, is actually a version of the opening song of the 1966 Iron Man cartoon.

They are related and wear the same t-shirt. 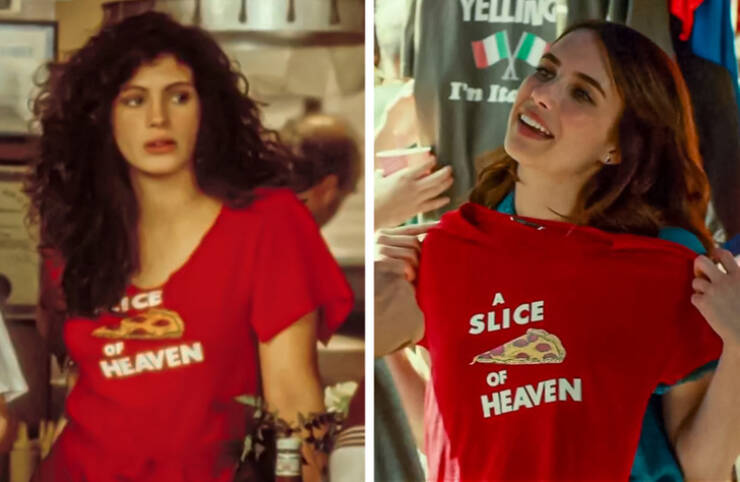 In Little Italy, actress Emma Roberts wore the same shirt as her aunt Julia Roberts in Mystic Pizza (1988). In addition, both films were directed by the same director: Donald Petrie.

You can find the same painting in different films. 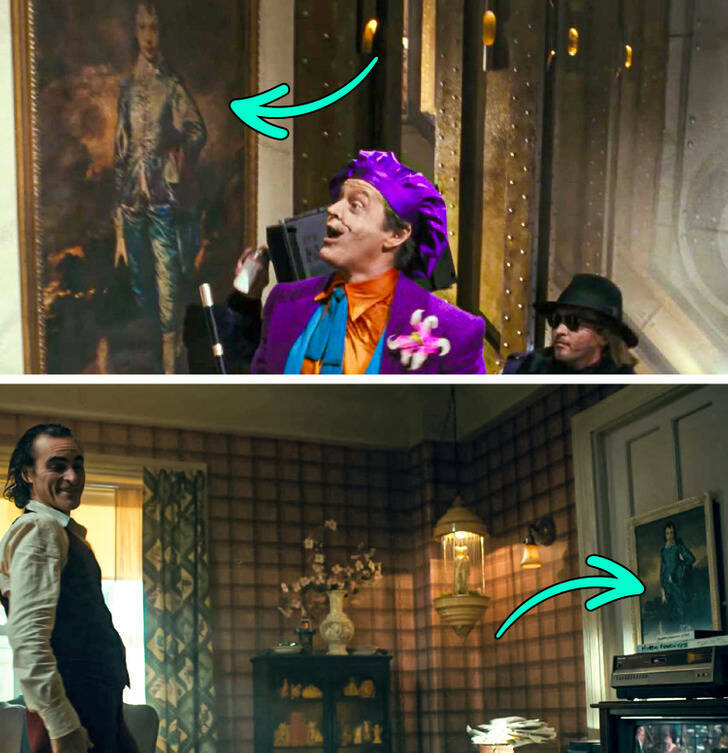 In Batman (1989), Jack Nicholson’s Joker looks at a painting. The same painting later appears as part of the room decor in Joker (2019).

Gargantua is a scientific recreation of a black hole. 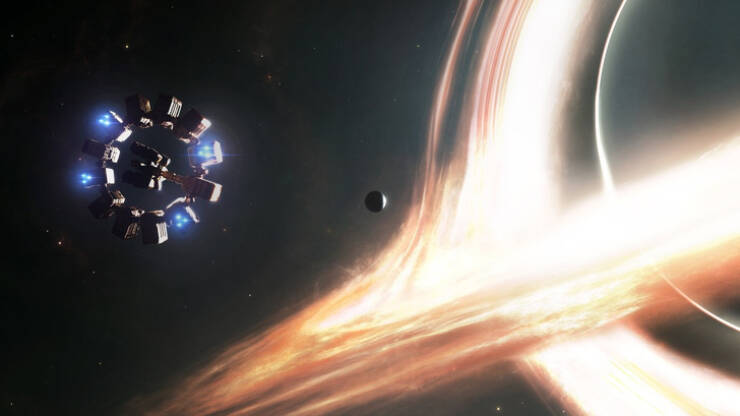 Creating Gargantua, the black hole of Interestellar, required scientists to work on calculations for an entire year. Thousands of computers and a team of 30 people worked for months on equations to make that happen. They also made several computer simulations. 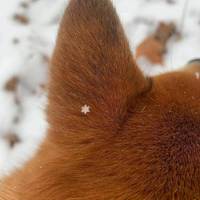 Woody 1 month ago
#12 That's the Blue Boy. It was a common print in southern California to represent luxery. The original was located in Huntington Gardens mansion when I was a kid.
Reply