The CIA is notoriously private about its operations and weapons but they opened up about some of the declassified spy tools currently on display at the CIA’s public inaccessible museum. As expected, most of the gadgets are pretty impressive. 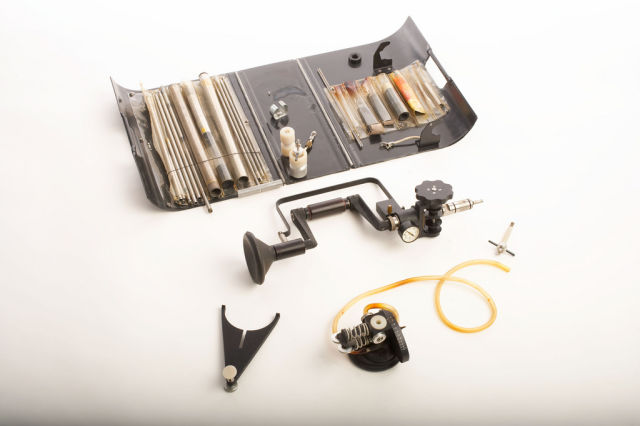 The CIA used the “Belly Buster” drill during the late 1950s and early 1960s to drill holes into masonry in order to implant listening devices. After assembly, the base of the drill was held firmly against the stomach, while the handle was cranked manually. The kit came with several drill bits and accessories. 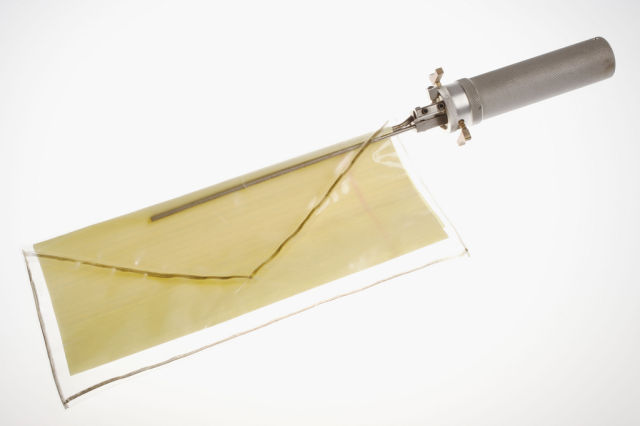 Special devices were used in World War II to retrieve letters from envelopes without disturbing their seals. The pincer-like device was inserted into the unsealed gap at the top of the envelope flap, then turned to wind up the letter and extract it from the envelope. 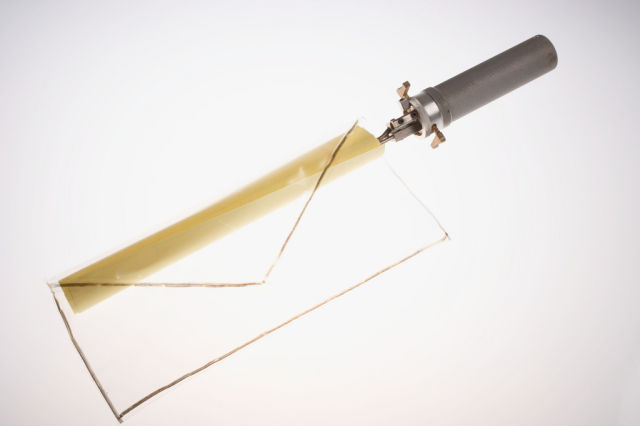 Here's a view showing the letter rolled up around the pincer for easy removal from the envelope. 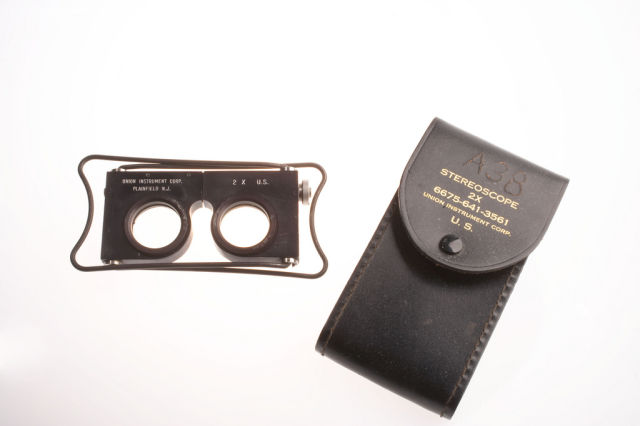 The stereoscope, used during World War II, helped Allied photo analyzers examine images of enemy territory taken by airplane-mounted cameras. It allowed them to view the film in 3-D. 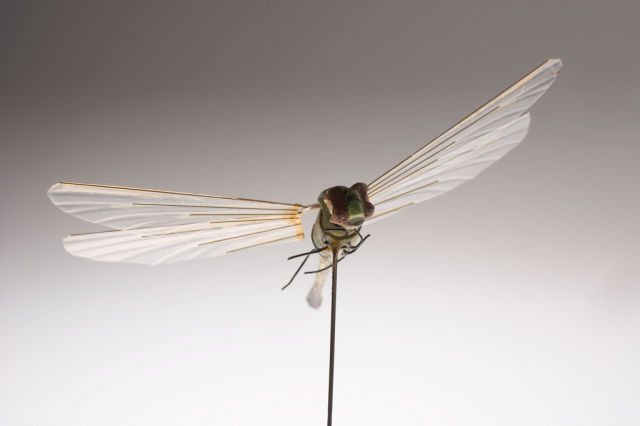 Developed by the CIA’s Office of Research and Development in the 1970s, this micro Unmanned Aerial Vehicle (UAV) was the first insect-sized aerial vehicle (Insectothopter) developed to explore intelligence collection via miniature devices. 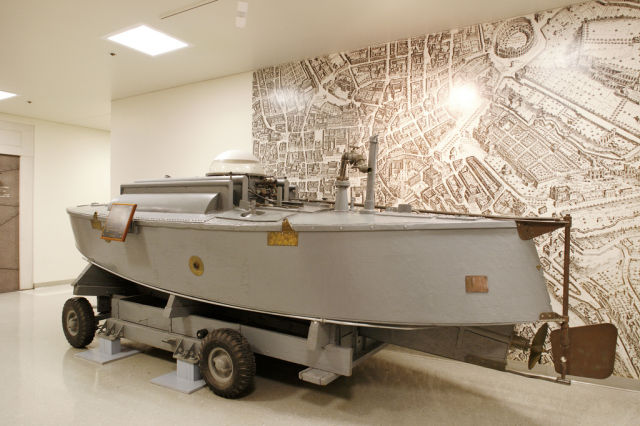 The CIA designed this two-man semi-submersible in the 1950s. It carried no weapons, provided cramped quarters, and required a "mother ship" for transport and recovery, but it could slip into regions that normal ships could not. 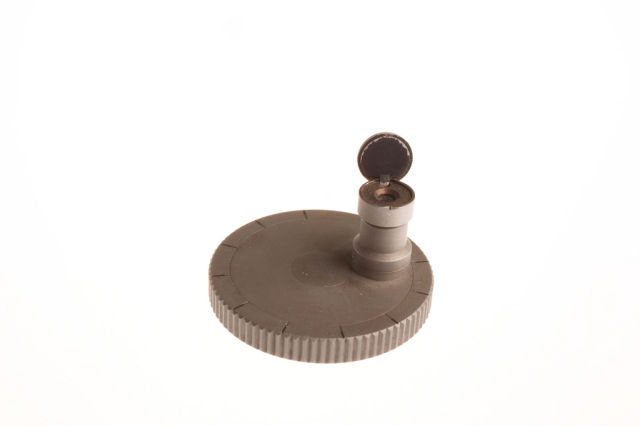 Transferring secret documents during the Cold War was aided by this microdot camera that could photograph and reduce whole pages of information onto a tiny piece of film the size of a sentence period. The film could then be embedded into otherwise banal correspondence as punctuation at the end of a sentence. Microdots were also hidden in rings, hollow coins and other items. The recipient would read the microdot with a special viewer. 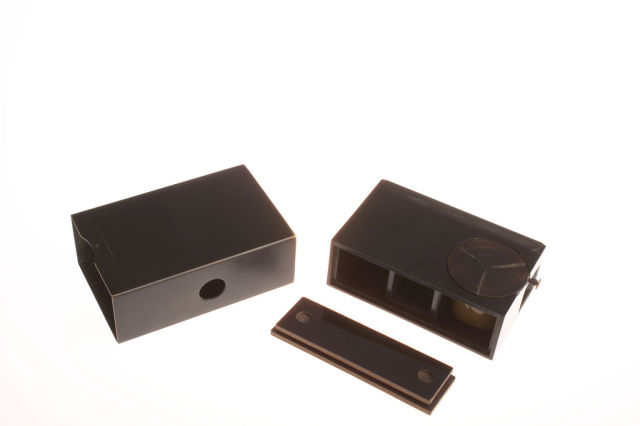 The Eastman Kodak Company developed and manufactured this camera for the Office of Strategic Services (OSS). Made in the shape of matchboxes that were used at the time, it could be disguised by adding matchbox labels in various languages and styles that were relevant to the country in which it was to be used. 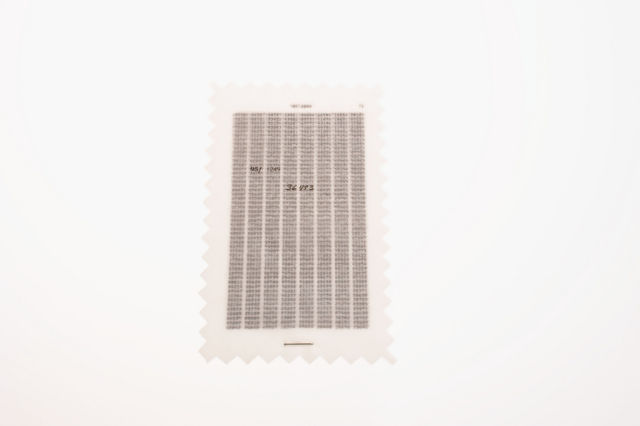 One-time pads (OTP) were issued in matching sets of two for encoding: one set was for the encoder and one for the decoder. No two pages were alike. Each sheet contained a random key in the form of five-digit groups. Once a sheet was used to encode a message, it was torn off the pad and destroyed. Because the codes were used only once, they were virtually unbreakable. 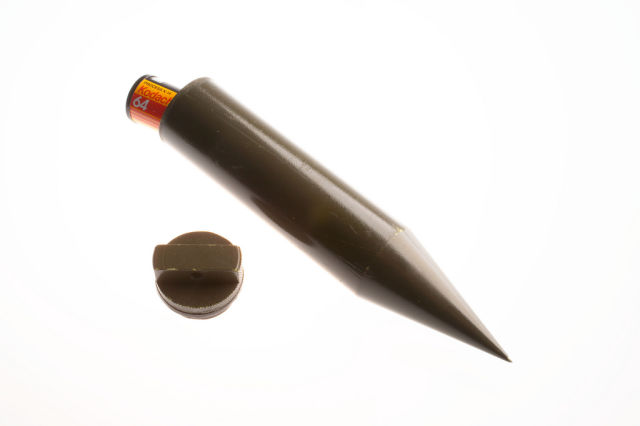 Used to facilitate secure communication between an agent and his/her handler, the spike, containing documents or film, could be pushed into the ground by the agent at a pre-arranged spot and later retrieved by a handler. 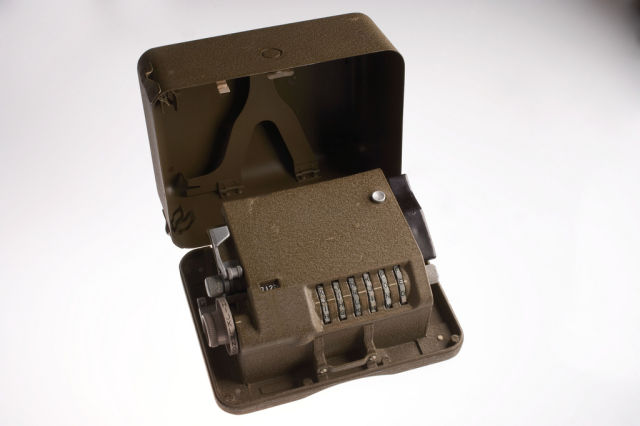 A mechanical cipher device designed by Boris Hagelin that was widely used by the U.S. Army during World War II. Compact and portable, it used a series of rotors to encode and decode secret military messages. 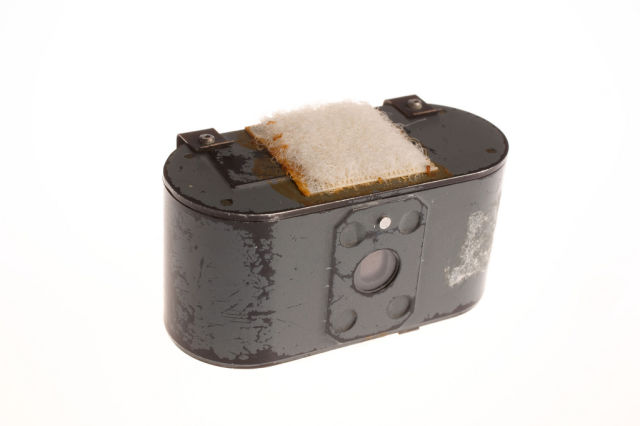 The CIA’s Office of Research and Development created this camera that was small and light enough to be fitted to a pigeon. Photos taken from the bird in flight could be captured within hundreds of feet of the target, producing much more detailed pictures than other image-capturing methods. 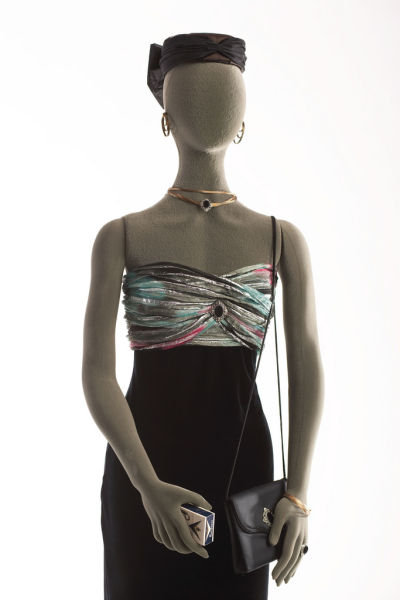 For the female mole attending a black-tie affair, surveillance equipment didn't have to be dowdy. This "couture" outfit from the Office of Technical Readiness allowed spies to munch on canapes and dance a waltz while still snapping surreptitious pics and recording cocktail chatter.

Code in a Compact 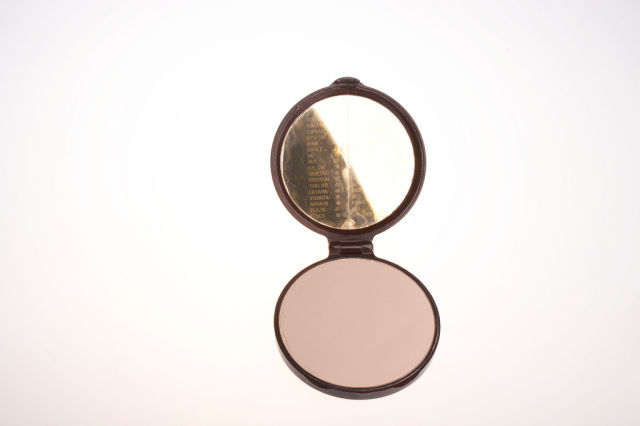 A female agent could powder her nose while sneaking a surreptitious peak at code hidden in the mirror of this handy dual-use compact. When tipped at a certain angle, the code was visible in the mirror. 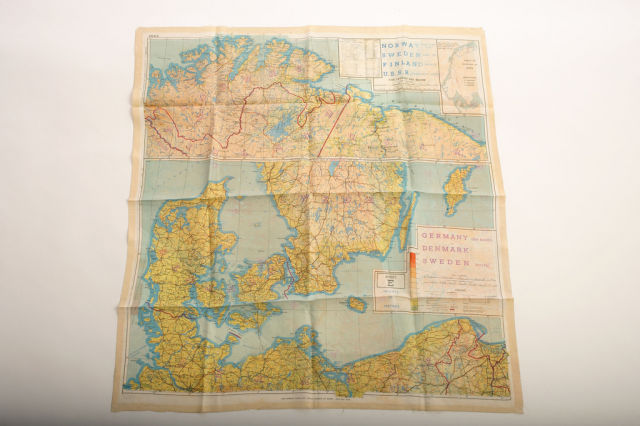 Printed on silk, this escape map could be folded compactly for concealment (or worn smartly as a scarf) and wouldn't rustle when opened and closed. It was printed with waterproof dyes so the colors wouldn't run if an agent had to make a sudden water-borne escape. 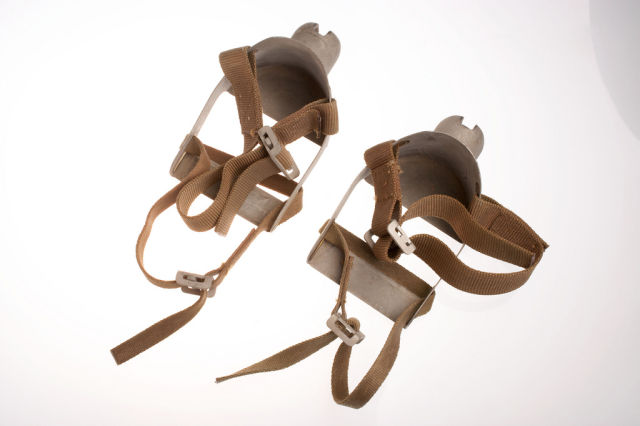 These "spurs," worn on airplanes, strapped over boot heels and were each attached to a ball connected to a cable beneath the plane seat. If the pilot had to pull the "D" ring (ejection handle) in an emergency, the cables would snap the wearer's feet back under the seat to ensure a smooth and safe ejection from the aircraft. 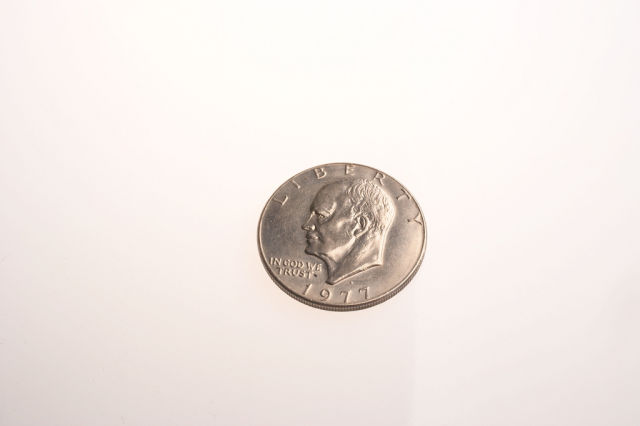 This Eisenhower silver dollar, hollow on the inside, could be used to conceal messages or film. 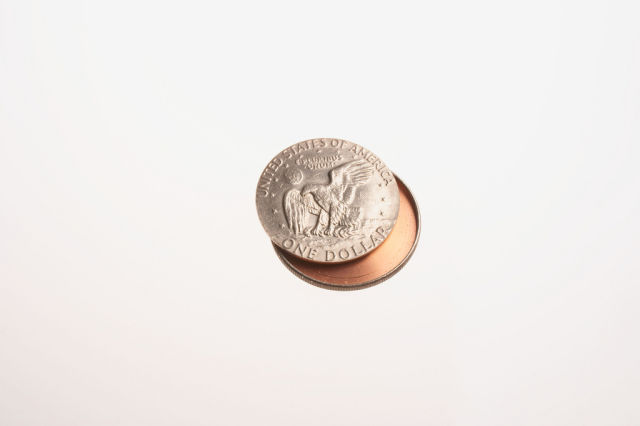 A view of the inside of the silver dollar, which could be used to conceal secret messages or film. 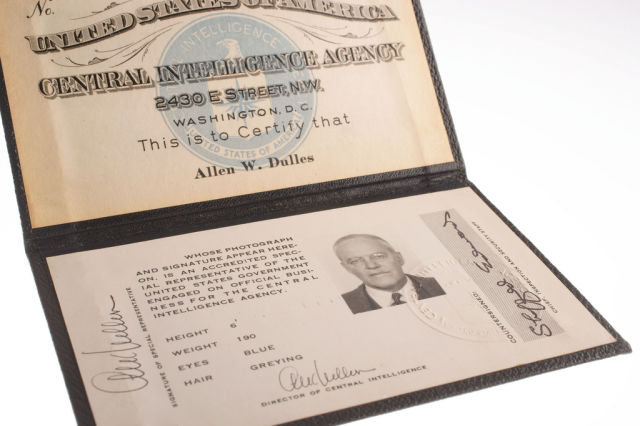 Greying hair apparently is a side-effect of being a U.S. president and a CIA director. But Allen W. Dulles earned his over a long career - the longest a CIA director ever served. Dulles joined the Office of Strategic Services (OSS) during WWII, during which he directed intelligence operations from Switzerland. In 1951, he joined the newly created Central Intelligence Agency and became its director in 1953. He retired in 1961. 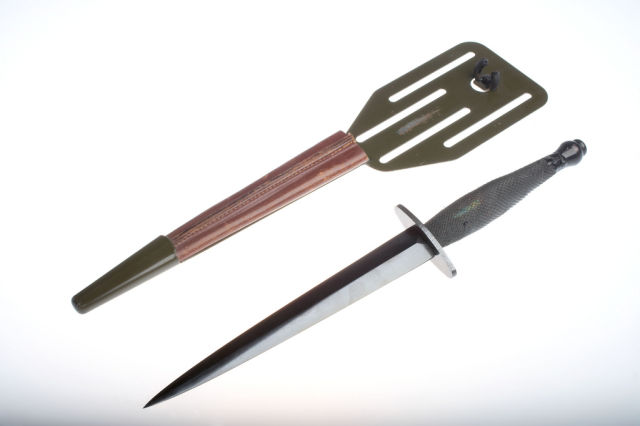 Introduced in 1941, the knife is named after its British designers, Captains W.E. Fairbairn and E.A. Sykes. Here pictured with its sheath (at left), the weapon was crafted to strike at the most vulnerable parts of an opponent’s body. 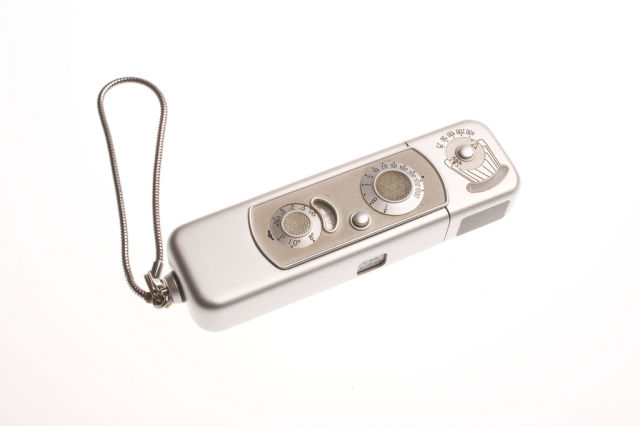 Walter Zapp, a Latvian engineer, developed a portable camera in 1937 that would fit easily into the palm of a hand and take high-quality pictures. Originally made from steel in Riga, it was considered a marvel of technology and became the world’s most widely used spy camera. 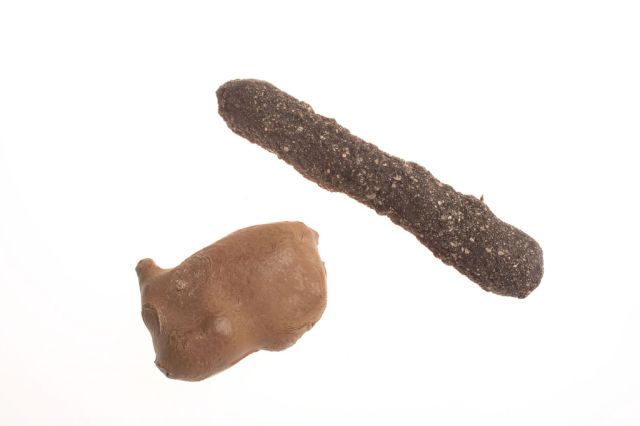 This Cold War-Era intrusion-detection system was designed to blend in with the terrain and could detect movement of people, animals or objects up to 300 meters away. The device operated on tiny power cells and had a built-in antenna. Its transmitter would relay data from the device by means of coded pulses. 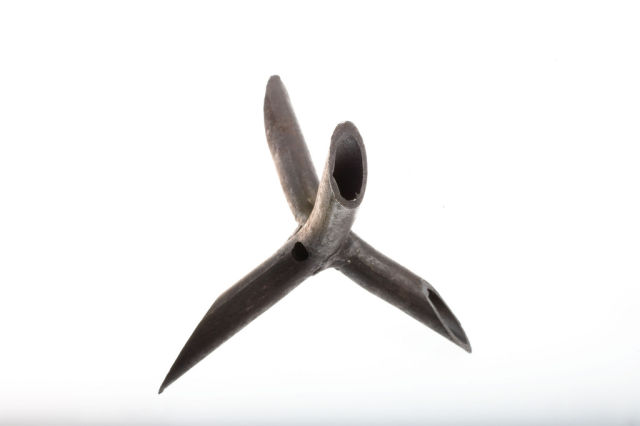 No matter how the caltrop tire spike was tossed on a roadway or airport runway, it would land with a tire-puncturing prong facing upward. 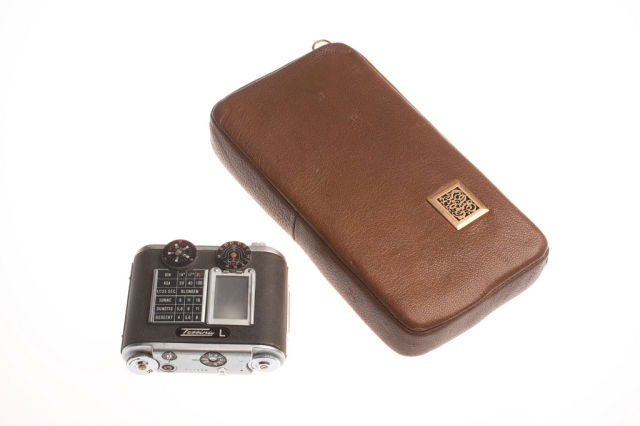 A miniature 35mm film camera manufactured in Switzerland was concealed in this modified tobacco pouch. A spring-wound mechanism advanced the film between exposures.

5 9 year s ago
the "3 invisible dicks" used by #4 is extremely disrepectful.
Reply
0

Billybob 9 year s ago
This is way more heplufl than anything else I've looked at.
Reply
0

robert.cavender.9 7 year s ago
Along time ago, when my boys were small children, we were driving across Cape Canveral (Nasa - Air Force ). I made a joke about a dragonfly paralleing our car. I told them we were watched by Nasa survallence. We probably were.
Reply
X
>
1/1
<