It is amazing how much civil servants and bureaucrats make in different countries. Some of them make as little as $11 per month. Usually, these people have extremely large families. 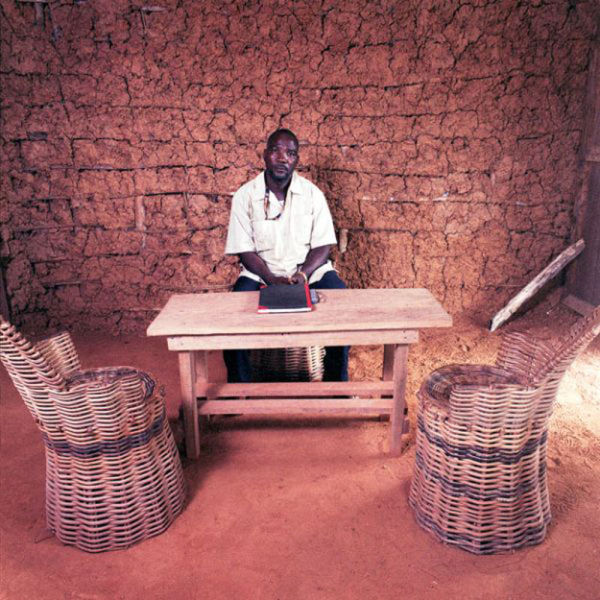 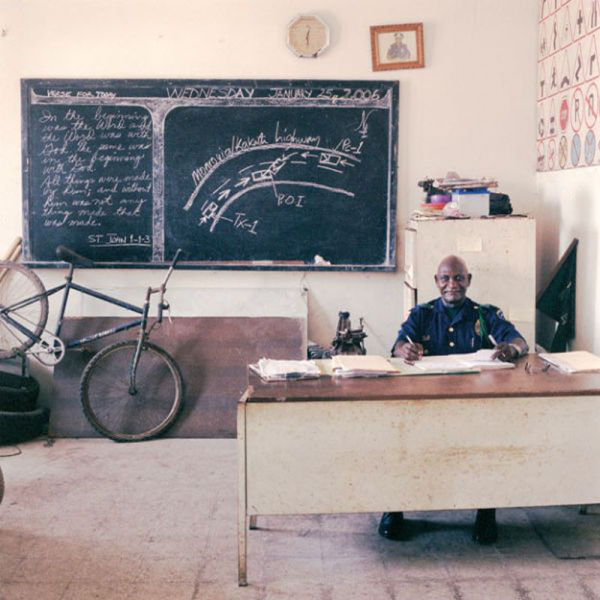 Liberia, bureaucracy, 2006. Liberia-04/2006 [Mon., AD (b. 1940)]. Major Adolph Dalaney (b. 1940) works in the Reconstruction Room of the Traffic Police at the Liberia National Police Headquarters in the capital Monrovia. Monthly salary: barely 1,000 Liberian dollars (US$ 18, euro 17). Traffic accident victims at times are willing to pay a little extra if Dalaney"s department quickly draws up a favorable report to present to a judge. 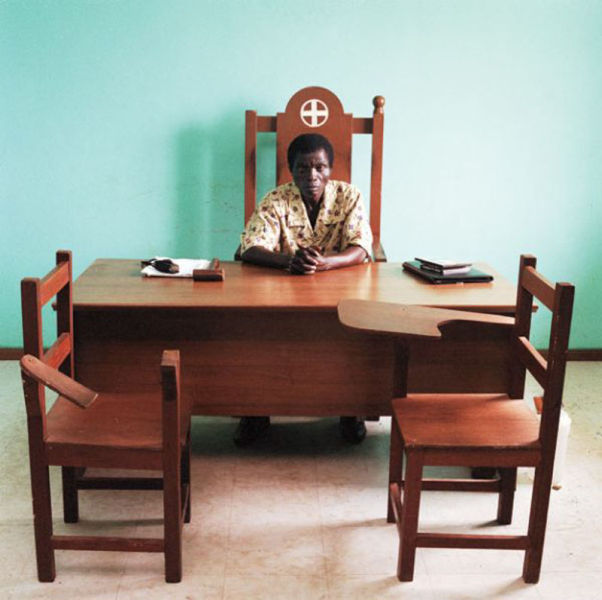 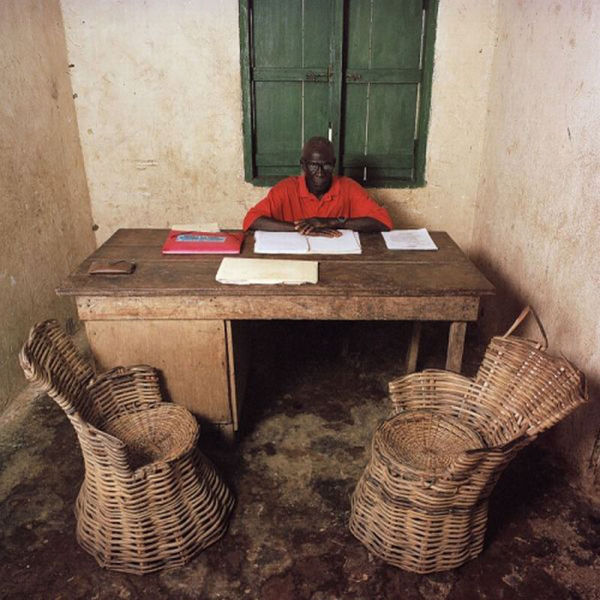 Liberia, bureaucracy, 2006. Henry Gray (1940), acting commissioner for Gbaepo district, Kanweaken, River Gee County. During the Civil War, the office was completely looted and destroyed: only one wall remained. Gray has 11 personnel, of whom only 4 are paid. The rest are volunteers. He has no budget and over two years salary owing. Yesterday, he went to the capital Fishtown to collect last two months salary, two times 975 Liberian dollars (2x US$ 17, 2x euro 16). All he got was 600 dollars (US$ 11, euro 10). Gray is father to 34 children (sic), 13 of them depending, and has 18 grandchildren. 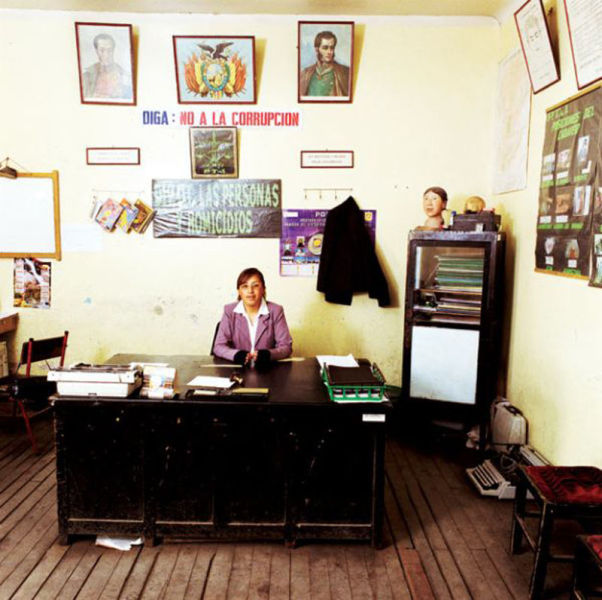 Bolivia, bureaucracy (police), 2005. Marlene Abigahit Choque (1982), detective at the the Homicide Department of the Potosi police. The department has only broken typewriters, no computer, no copy machine, not even telephone. It shares a car with the Vice Squad: "If there is no petrol in the car, we have to buy it from our own money. If the car is gone, we take the bus. We have to pay the tickets ourselves." The head on the cupboard to the right is used to make witnesses of murder cases show where the bullets went in or out.Monthly salary: 920 bolivianos (euro 102, US$ 114). 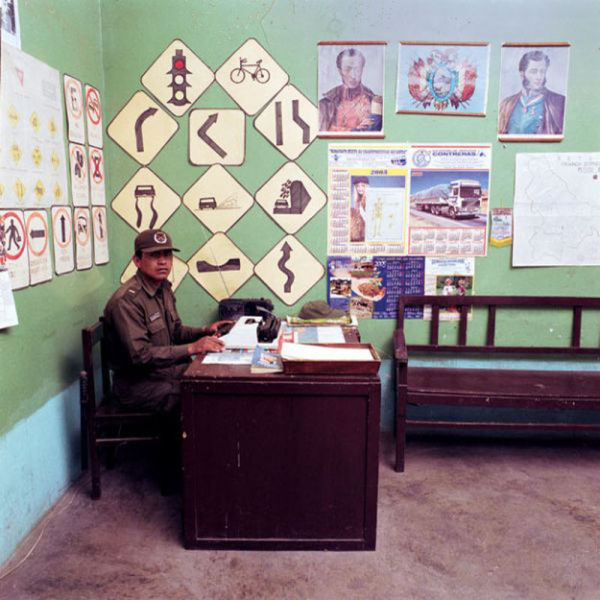 Bolivia, bureaucracy (police), 2005. Josué Galarza Mendez (1969) is police constable in Betanzos, Potosi department. The police post has 5 men, among other things responsible for safety on the main road from Potosi to Sucre. And they try to solve thefts and burglaries. The bureau has one motorbike. The typewriter is Mendez’s private property. In emergencies, he uses his own mobile phone. Policemen have only truncheons for weapon. Whoever has a gun, has paid that himself. His monthly salary: 977 bolivianos ( euro 109, US$ 122). 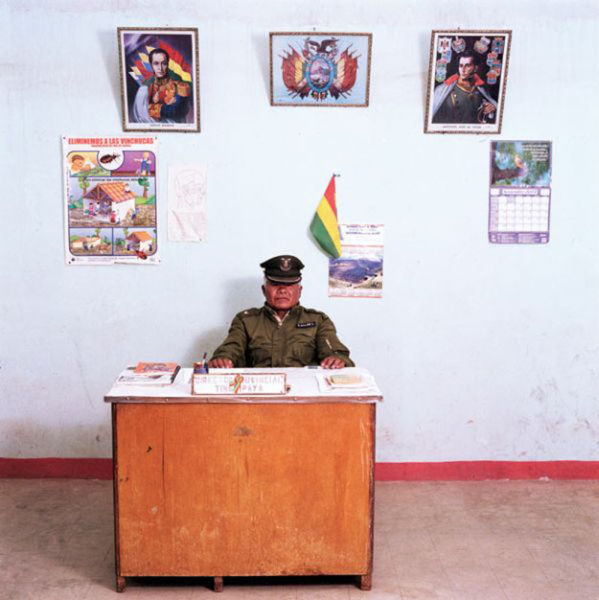 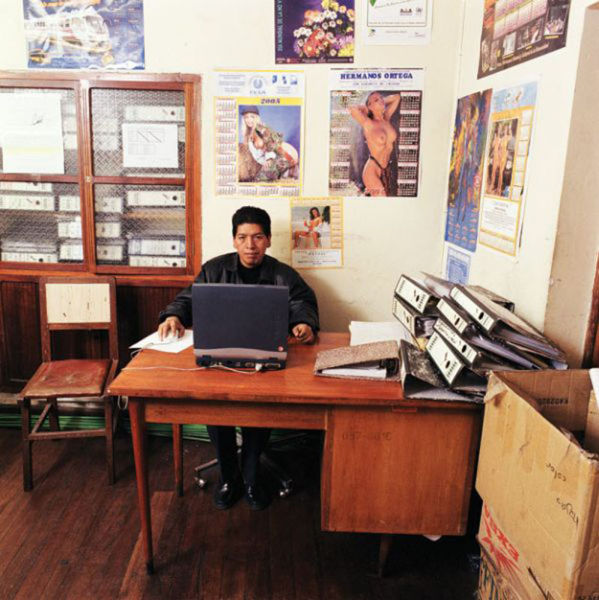 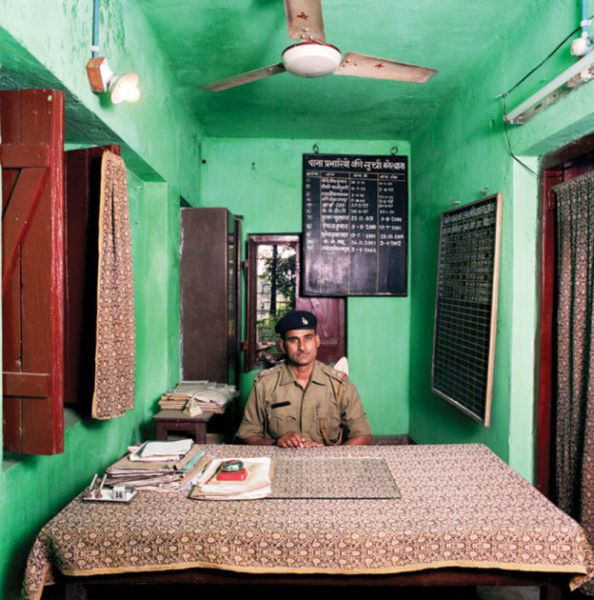 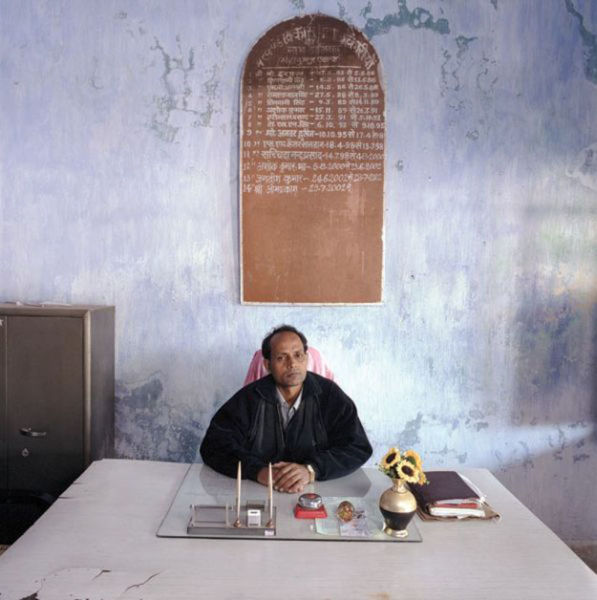 India, Bihar, Bureaucracy, 2003. India-28/2003 [Mak, OP (1963)]. Om Prakash (1963) is Block Development Officer (BDO) in Makhdumpur Block (200.000 inhabitants), district Jahanabad, Bihar. Prakash has 45 subordinates and is responsable for public order and the development of his block. As the highest civil servant in Makhdumpur, he has a towel on his chair. The plate behind him contains the names of his predecessors. Monthly salary: 12,000 rupees (euro 240, US$ 263). 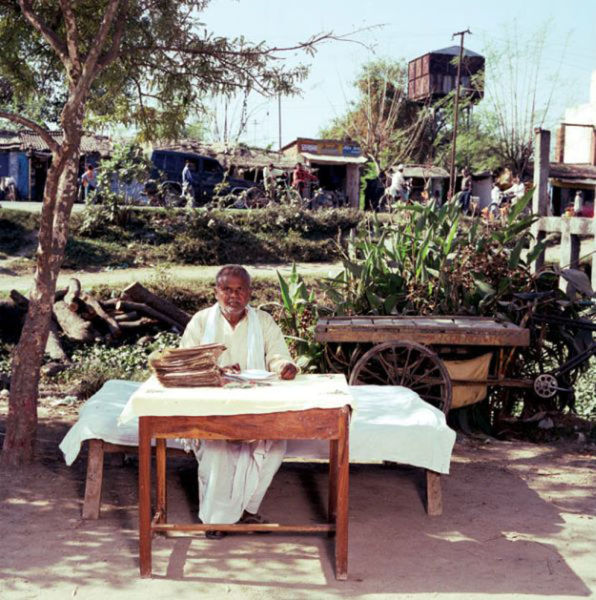 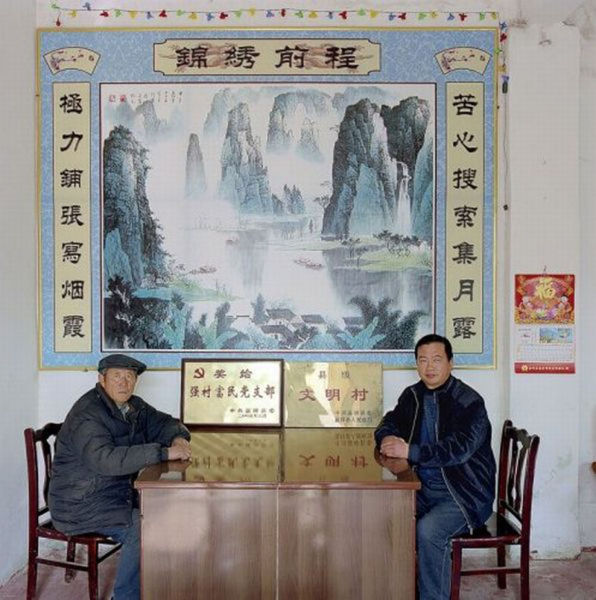 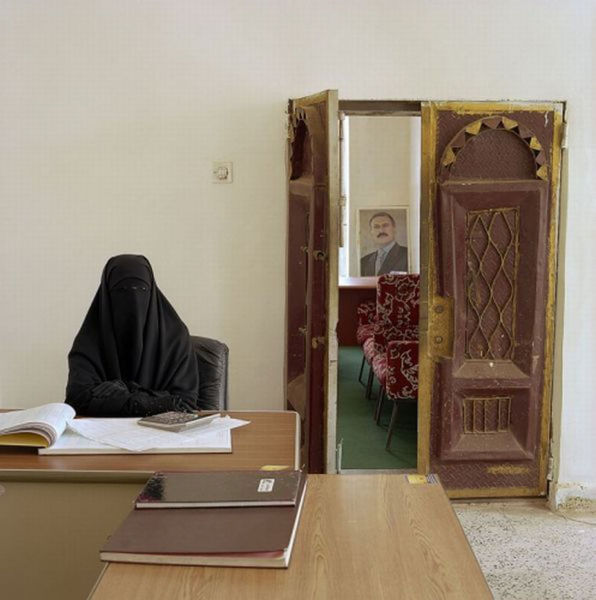 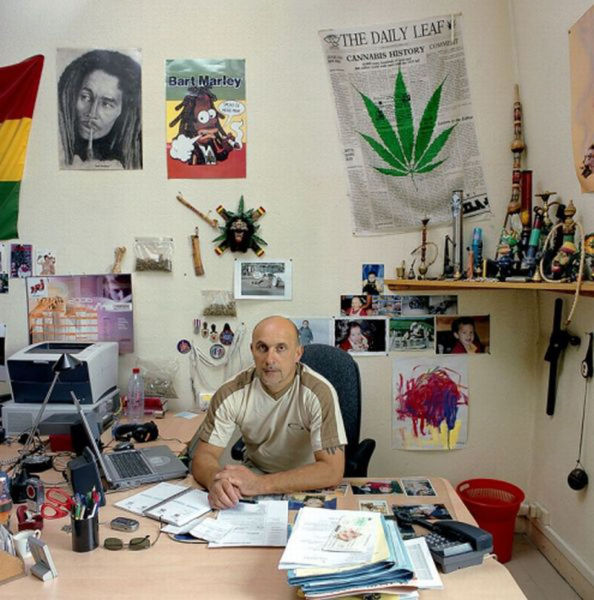 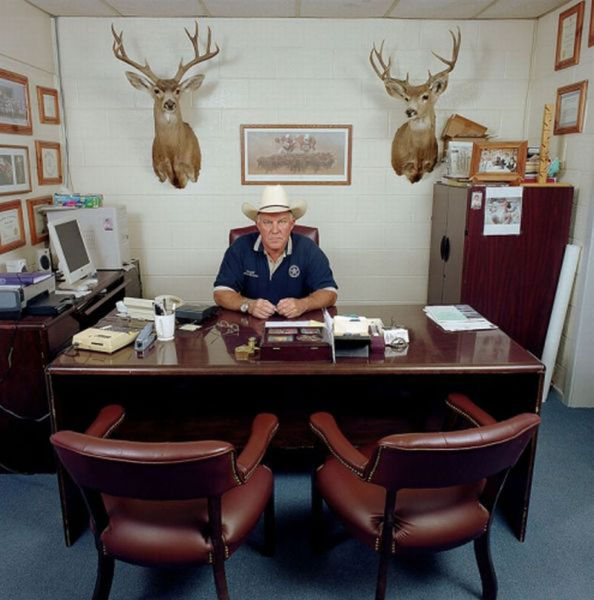 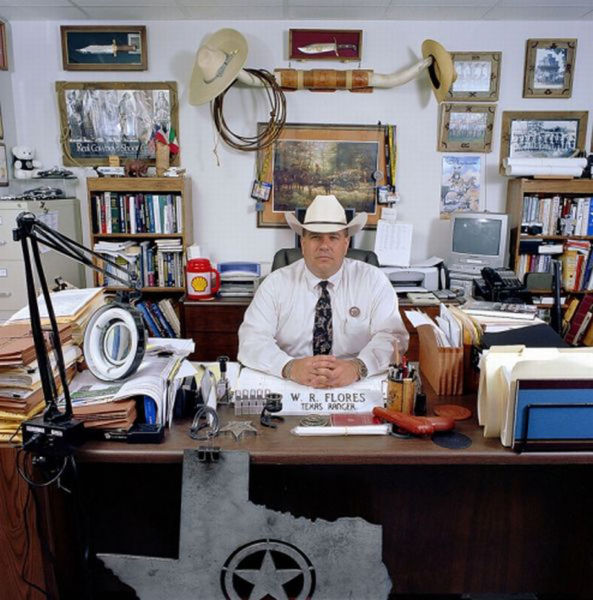 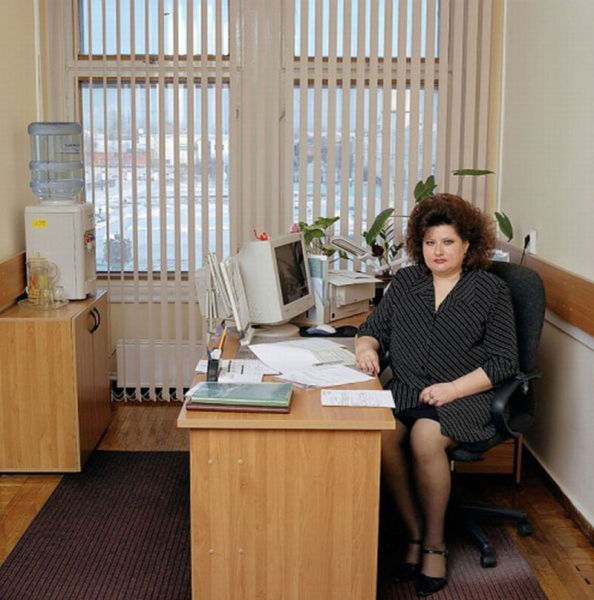 Russia, bureaucracy, Siberia, province Tomsk, 2004. Russia-19/2004 [Tom., MNB (b. 1962)]. Marina Nikolayevna Berezina (b. 1962), a former singer and choir director, is now the secretary to the head of the financial department of Tomsk province"s Facility Services. She does not want to reveal her monthly salary.

Mr. Ree 9 year s ago
So, are we supposed to feel sorry for the workers in poor countries?
Maybe if the men in Liberia had only enough children that they could care for, they wouldn't live in such a shithole. 34 children? That's ridiculous. His balls should have been removed after the first child was born. He has 18 grandchildren. His irresponsibility is being perpetuated.
Bolivia? The major export of that shithole country is illegal drugs. Fuck them if they can't pay their workers. Fuck 'em anyhow.
#17 - yea, he looks like a redneck douchebag, but look at the paperwork all over his office. He's obviously carrying a hell of a lot more of a workload than the goons in the first several photos.
When the scumbags in these 3rd world countries start acting like humans instead of like animals, maybe they will get more help and understanding from those of us that are humans.
Reply
0

iziwhaat 9 year s ago
Haha really Mr. Ree, thats how you feel? Acting like humans instead of animals and calling Bolivia a shithole wow. Do you know who has the demand for those illegal drugs? Your country. Do you know who funds and supplies those illegal drug traffickers with weapons? Your country. Do you know why those guys cant get paid? Because those are government jobs, and their leaders are too busy scheming with your government than to aid the police fund wars against the drugs. Im sure if #6 was getting paid 5,000 a month the department would have some papers and horns and not f-ing road signs.

The fact that old rabbit man from #4 has so many children is of little importance to his poverty. If he was getting paid the same as that fat cow in the crowded office those 34 kids and 18 grandkids would be fatter i can promise you that. Plus, my Grandfather had 22 kids, i dont even know how many grandkids, and lived in a huge compound house with 2 other families but I can assure you me and my family are now wealthier than you and yours.
And for your "redneck douchebag" im sure those papers make it look like a workload doesnt it? In my opinion those are unsolved crimes sitting right there in front of him. If he'd spend less time shooting buffalo as sport and more time going through those papers there would be a much smaller stack next to him. And do you not think #3 might want a few papers around him, maybe with his student and faculties names and if they had a phone maybe some digits too?
The thing is you need to not be so ignorant. Situations are hard on all in the world but ignorance and comments like "When the scumbags in these 3rd world countries start acting like humans instead of like animals, maybe they will get more help and understanding from those of us that are humans." doesnt belong anywhere. Do those dogs and cats people spend more a day on than Daddy of 34 gets a month act like humans more than he does? Is that why people help their pets and show more understanding to them?
Reply
0

eatshitanddie 9 year s ago
iziwhaat - if you're so fucking rich, why don't you donate some money and time to paying those worker's salaries instead of arguing like a dumbass on the internet?
Reply
0

responsibility 9 year s ago
Many Lecture in my country get Monthly salary less than all of them... :(
Reply
0

iziwhaat 9 year s ago
who says I dont eatshit?
Reply
0

Asparuch 9 year s ago
Bolivia looks like a nice country to live.
Reply
0

black_tiger 9 year s ago
In most of these countries, they can somehow survive.
if all the world was poor, the rate of crimes will decrease.

The problem if part of them (let us say 15%) went to other country that gives X10 salaries. They will send money to their homes so their families lives like kings. Having a group of rich ppl in a poor community will raise the prices (even a little but don’t forget how hard was the surviving before adding this little).
Prices NEVER goes down, so more ppl will try to go where the 15% went. Most of them will not be qualified to offer something special that insider ppl can not offer but they will go for somthing like: cheap costs, less rights (including safety), no union headache or even claiming to have a special talent/certificates/knowledge (which mostly a lie only to get the job not to get the job DONE).at the end rich country/ppl lose & poor country/ppl gain.

every time a foreigner enter USA for a job, another person (amercian or not) lose his own. job market is not unlimited resource. especially in these years.

mikito 9 year s ago
The article was very interesting and also the photos were very good.
If you know the name of the photographers, please send the mail to the following address.
[email protected]
Best regards
Mikito
Reply
X
>
1/1
<