Here Are The Absolute Best Prisons On Earth (25 pics)

Last time we talked about the world's worst prisons . Today it's about the most comfortable, lavish and cushiest prisons where even you wouldn't mind to go once in a while.

Justice Center Leoben, Austria: If you just have to commit a non-violent crime, like, let's say, dog theft, Leoben, Austria, is the place to go. In the Justice Center at Leoben, each prisoner is given a single cell, with a private bathroom, and kitchenette, plus a television. That's better than most apartments in Los Angeles. The weight room, basketball court, and outdoor recreation area add to the list of perks and amenities. 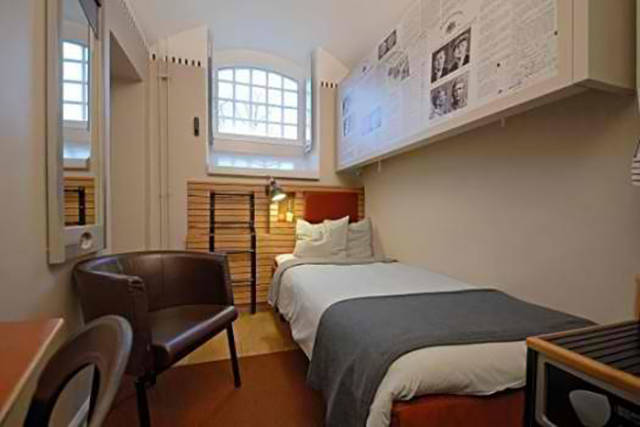 Aranjuez Prison, Spain: If you're a family man, you definitely want to be arrested in Spain. Aranjuez Prison is the premiere prison for families. Mainly because children can stay with their incarcerated parents as long as mom or dad is present at morning and evening roll call. Think of it like an Oz themed sleepover. Or not. 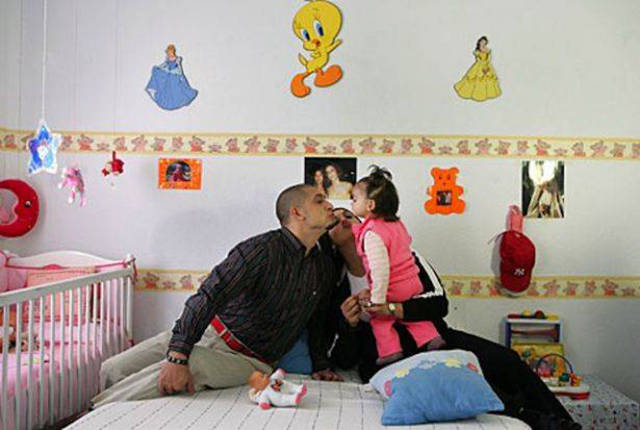 Bastoy Prison, Norway: This minimum security prison is located on Bastoy Island in the middle of the Oslofjord. It houses slightly over 100 inmates who live in small cottages and work on the prison farm. Sunbathing, in addition to tennis, fishing, and horseback riding are the preferred pastimes of the prisoners. 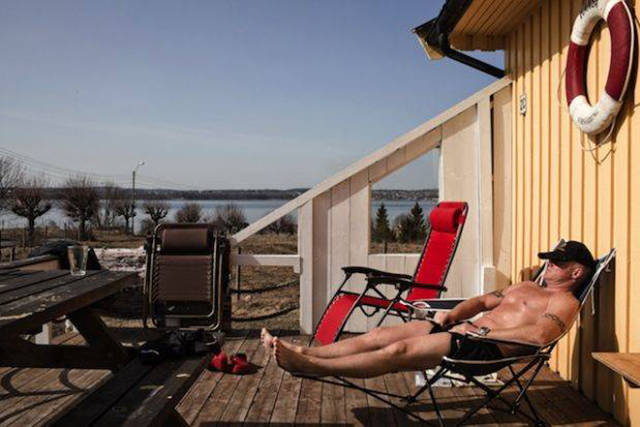 Sollentuna Prison, Sweden: This top-of-the-line prison in Sollentuna includes cells with comfortable mattresses and private bathrooms. After prisoners hit the weight room, they can cook dinner in the state of the art kitchen before kicking back and watching TV on the couch. Sweden’s prison authorities are quick to point out that every square inch of the prison can be seen on a security camera. Finally we can gain insight into shower time in the European prison system! 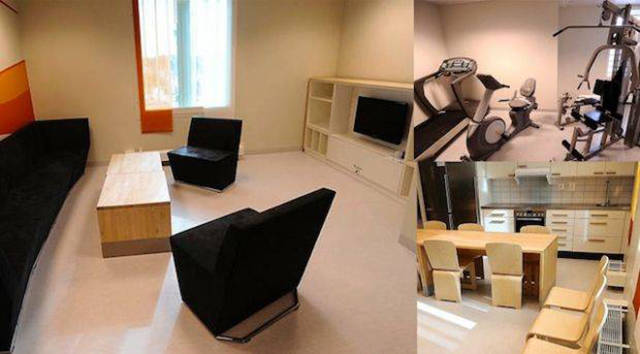 Otago Corrections Facility, New Zealand: Otago corrections facility has a single entrance, an electrical fence, and it X-rays all visitors - in addition to employing everything from cell phone jammers and microwave sensors. While it seems like a prison meant for Bond villains, Otago provides comfortable rooms, and rehabilitates prisoners by teaching them job skills in light engineering, dairy farming, and cooking. 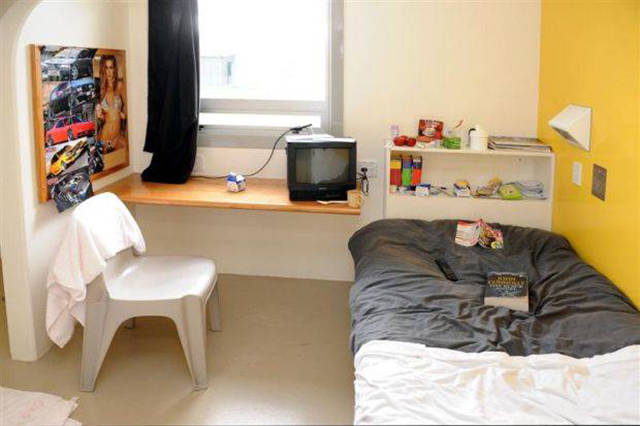 Richmond City Jail, Virginia: Richmond City Jail is slowly revolutionizing its prisoners through family-oriented activities like father/daughter dances. No one wants these events (that will definitely scar their children for life) to be cancelled, so inmates are well-behaved and compliant. 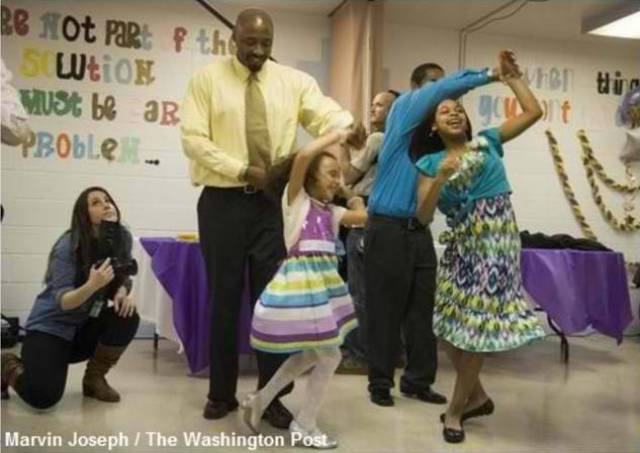 Champ-Dollon Prison, Switzerland: Champ-Dollon Prison had its problems with overcrowding, disease and riots. In fact, it was denounced as the most overcrowded and disease-ridden detention center in all of Europe. Responding to negative reviews from the anti-torture committee of the Council of Europe in 2008, Switzerland called for a change. In 2011 the Geneva prison had more than $40 million pumped into a new wing and refurbishments. 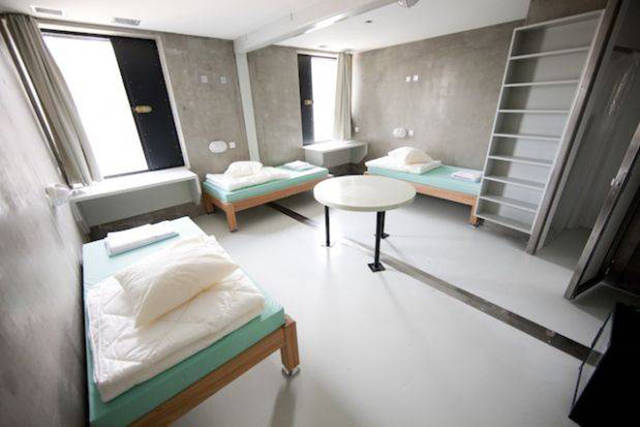 Yankton Federal Prison Camp, South Dakota: Yankton was a college campus once upon a time, so prisoners enjoy bright, airy spaces and dorm rooms converted into libraries and activity centers. Those with good behavior can also volunteer off-site for groups like Habitat for Humanity. The big draw to this prison (other than the feeling that you're in an '80s slobs vs. snobs movie) is the community garden. 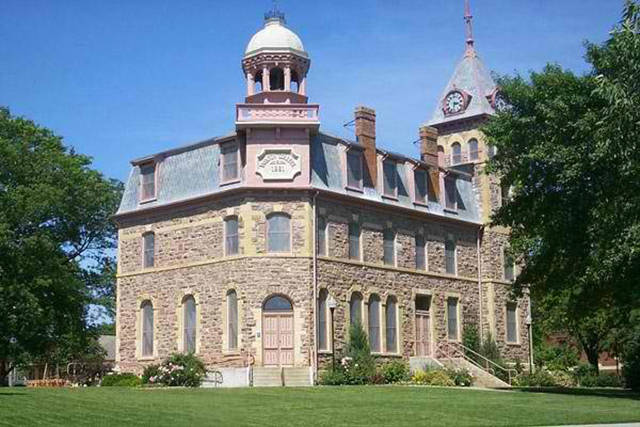 Her Majesty’s Prison Send, England: This women’s prison in Surrey is where you go if you've got connections, BABY! The prisoners at HMP have a remarkable amount of freedom, including the ability to take beauty treatment/cosmetician classes and college courses, in case they'd like to re-enter polite society one day. 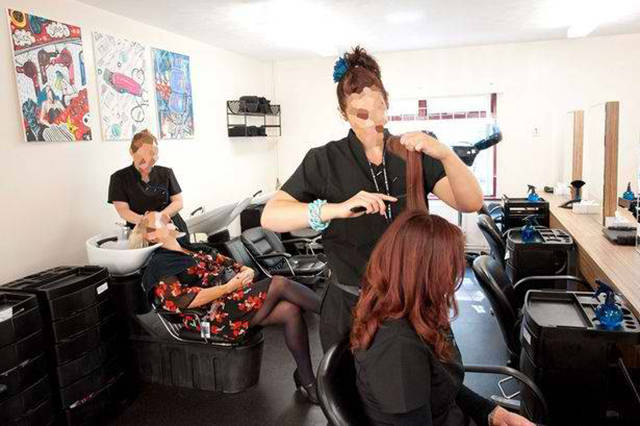 JVA Fuhlsbuettel Prison, Germany: JVA Fuhlbuettel is Hamburg’s luxury prison for long-serving inmates. Renovated and reopened in 2011, the spacious cells include a bed, couch, and the disgusting sounding combination shower and toilet. Prisoners have laundry machines and a small conference room for reenacting their favorite episodes of The Office, or whatever. 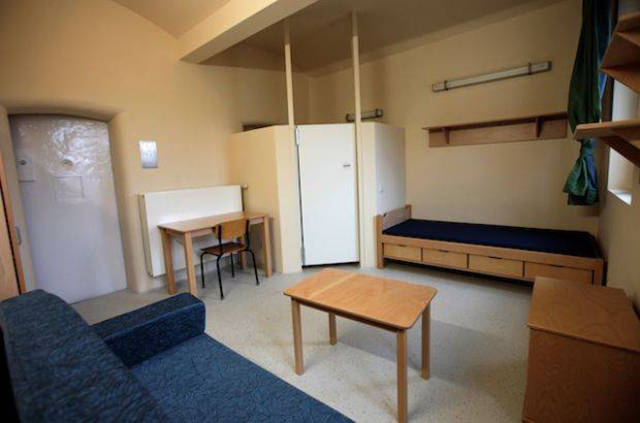 Suomenlinna Prison, Finland: One of the world’s only “open prisons,” Suomenlinna exists with no cells or locked doors at all. Prisoners live in shared houses with private rooms and are allowed to work construction around various parts of the island. Do you think they also offer writing retreats? 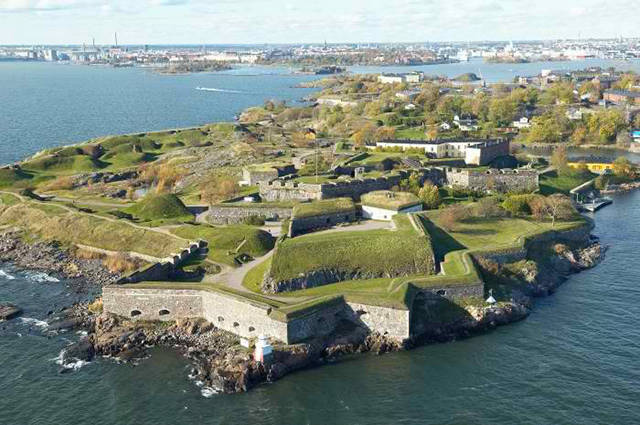 Morgantown Federal Correctional Institution, West Virginia: One of the many "camp feds" dedicated to making sure white collar criminals don't have too rough of a stay after defrauding a bank (or whatever they do). The prison offers classes and even associate’s degrees in things like computer technology and business management. If you aren’t well-educated before you go in, you will be by the time you leave!

Halden Prison, Norway: If you're a murderer who's also an aspiring musician or rock climber, your best bet for accomplishing all of your life goals in one place is to commit a crime in Norway and get sent to Halden Prison. Even if rock climbing or recording music isn't your jam, you can spend time in the library, or get into cooking in their state of the art kitchen. The world is yours! 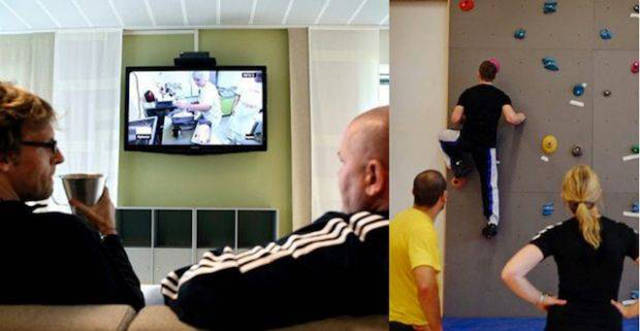 Her Majesty’s Prison Wandsworth, England: With two gyms and a sports hall, there are plenty of ways to pass the time at Wandsworth. Facilities include a rest area, refreshments and a children's play area. The centre also provides information on a selection of support agencies, such as the Prisoners' Families & Friends Service. Inmates have even banded together to form an award-winning radio program called "Radio Wanno." 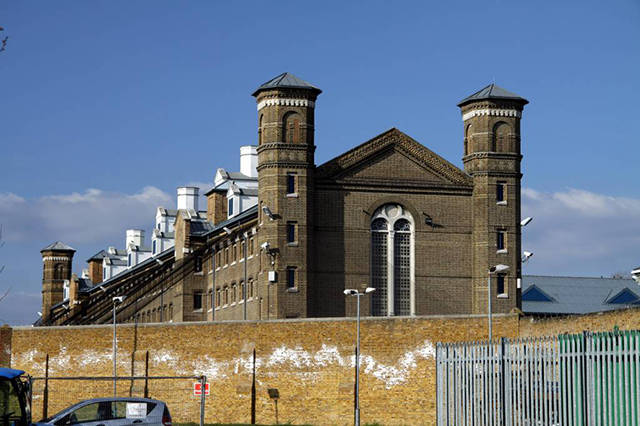 Mahanoy State Correctional Institution, Pennsylvania: The nonviolent offenders of Mahanoy enjoy everything from lounge furniture to outdoor football fields, and they might even be getting iPads soon. 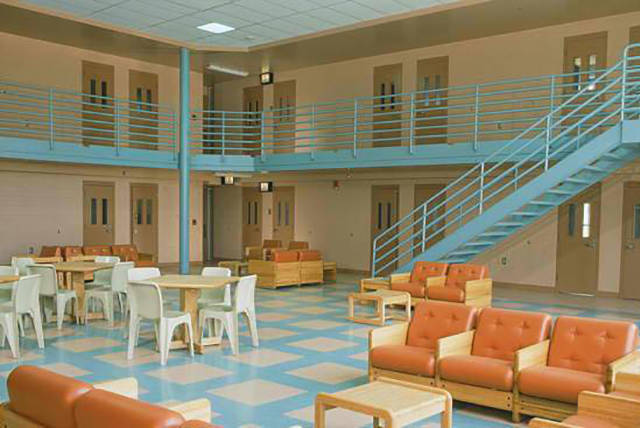 Pondok Bambu Prison, Indonesia: Pondok Bambu Prison in Indonesia is a stellar example of inmate comfort through prison corruption. The pictured cell is that of Artalyta Suryani, who was convicted of bribing a prosecutor in a high profile case. Notable amenities included an air conditioner, refrigerator, and karaoke machine. We hope that that the prisoner in the cell next to her has the hookup on some ear plugs. 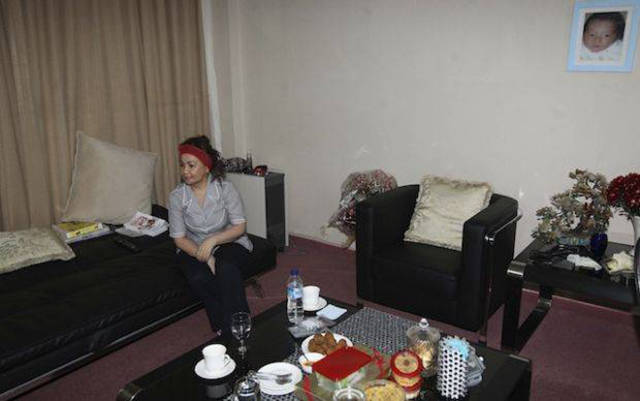 HMP Addiewell, Scotland: Addiewell is a learning prison based in Southern Scotland, where inmates are given 40 hours a week of purposeful activity aimed at building job skills to allow for a transition back to civilian life. Despite the opportunities present at Addiewill, the prison is still considered a "powder keg." 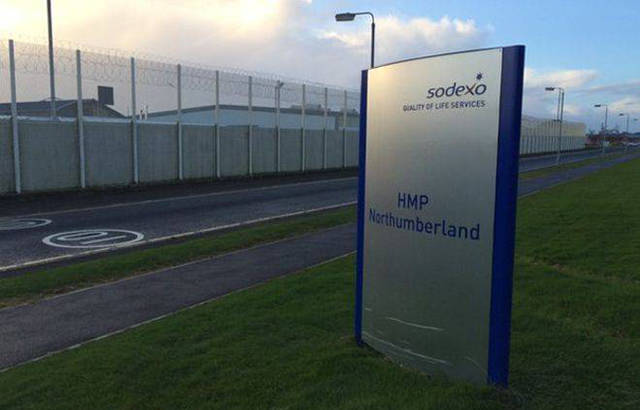 Cordillera Jail , Chile: Yes, there are armed guards outside Cordillera Jail, but that’s only because the convicts don't want YOU getting all up their swanky prison. Well, at least until 2013, when the riff-raff of Chile decided that they didn't want to pay for a set of luxury condos for the criminal elite. 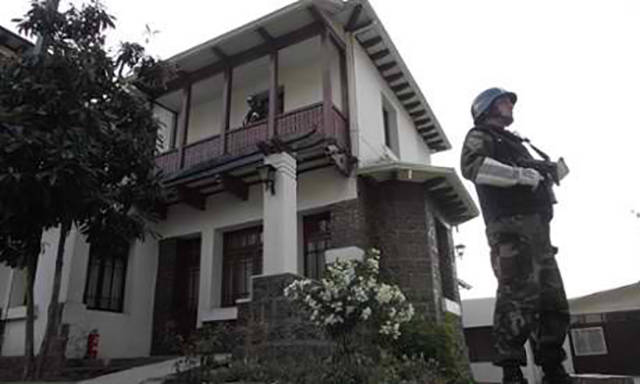 Federal Correctional Complex, Butner: Home to white collar criminals like Bernie Madoff, you won’t find any shivs in the quiet corridors of Butner, especially if you can swing entry into its minimum-security campus. Fancy a game of prison tennis? 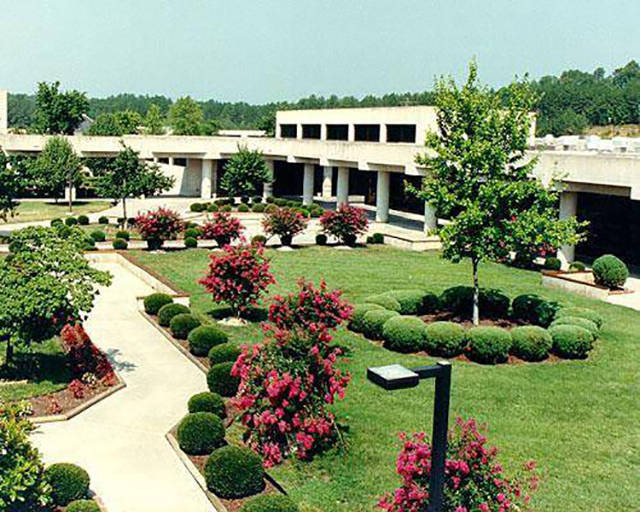 Dublin Federal Correctional Institution, California: Dublin is a prison with culture. Solar panels decorate the roofs, the library is stocked with classics, and civilized prisoners are allowed to work off-site with supervision. It's like Brooklyn, but with fewer scarves.

Her Majesty’s Prison Forest Bank, Manchester: A recent expose of Forest Bank revealed that prisoners were being provided up to five “luxury meals” a day, with menus offering almost a hundred choices in meats, drinks, desserts, et cetera. The public was outraged. The prisoners were mostly fat. 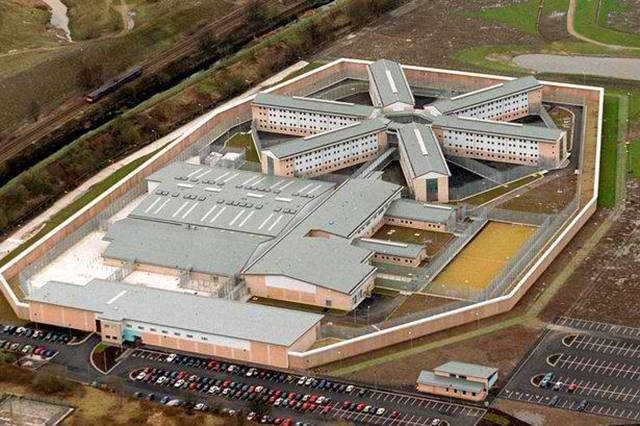 Alexander Maconochie Centre, Australia: This multimillion dollar prison was constructed with comfort in mind, so it should come as no surprise that the cells are open and luminous and that the library is teeming with books. The Centre was designed with environmental principles in mind and includes initiatives such as below ground fresh water storage, grey water recycling for toilet flushing and irrigation, solar hot water and high grade building insulation. And it's the first prison in Australia to meet human rights obligations. Congratulations for doing the bare minimum Australia! 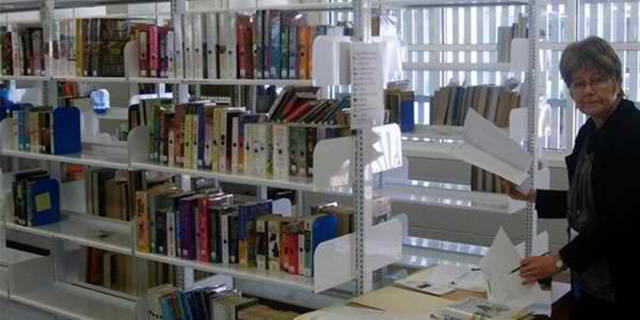 San Pedro Prison, Bolivia: San Pedro isn't the fanciest of the prisons on this list, but it's definitely different than your usual incarceration experience. Inmates at the prison have jobs inside the community, buy or rent their accommodation, and often live with their families. Tourism is popular, and savvy inmates can move up into cushier accommodations. Stabbings are somewhat commonplace, but look at that paint job! 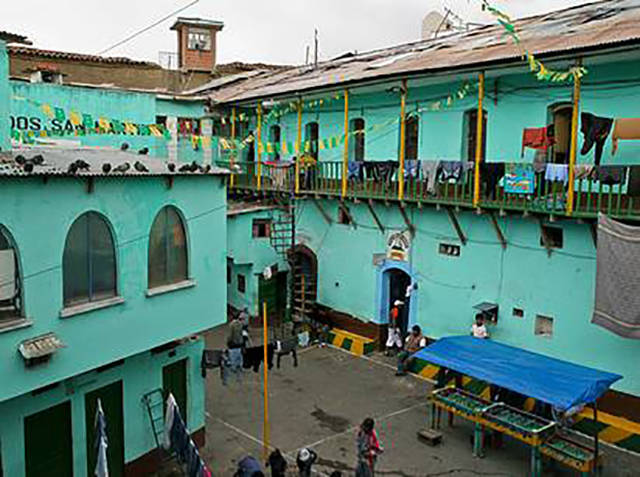 Qincheng Prison, China: Orchards and fish ponds stretch across the grounds of this luxury prison. Most inmates are high-ranking government officials who can expect to serve their time eating fresh fruit, watching HDTV and admiring the misty hills outside 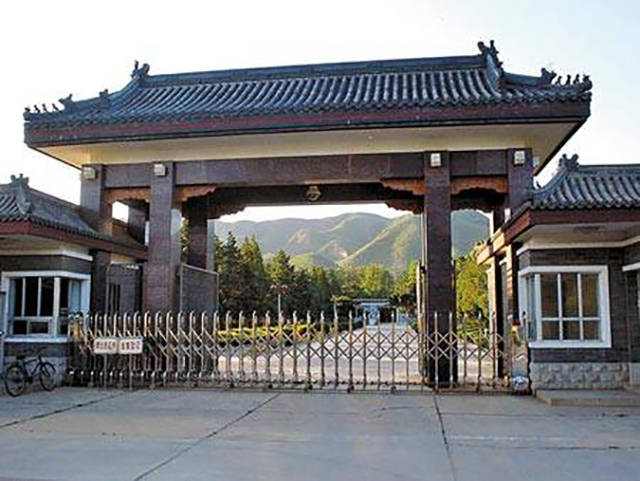 Sala Prison, Morocco.: While regular prisoners serve their time in squalor, the elite prisoners of Sala can expect to enjoy “Abu Dhabi suites” with comfortable accommodation and even luxury service from the staff. 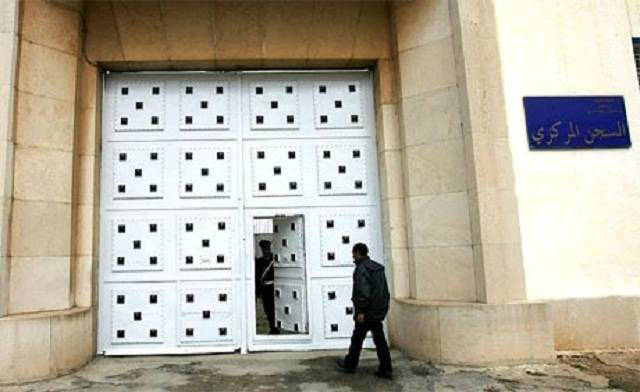 Boston 1 year ago
Know what? I don't want to go into prison for what ever reason. Therefore I am not a criminal. I do not care how 'cushy' the prison is.
Reply
0

Million 1 year ago
But the one thing they don't have is freedom. That's outside the prison.
Reply
X
>
1/1
<