So What Is The Answer To This Math Equation?! (21 pics) 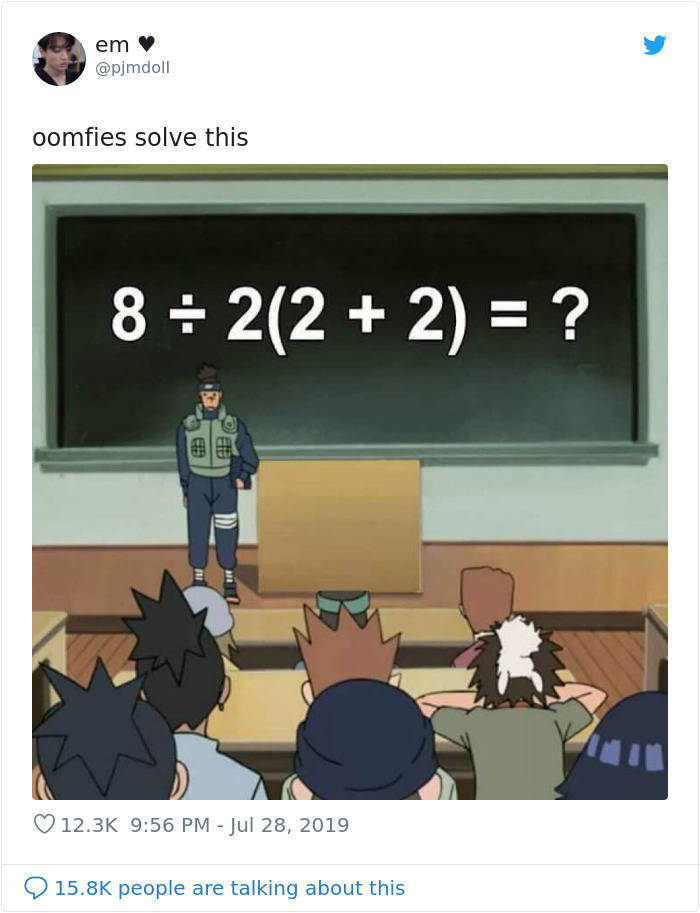 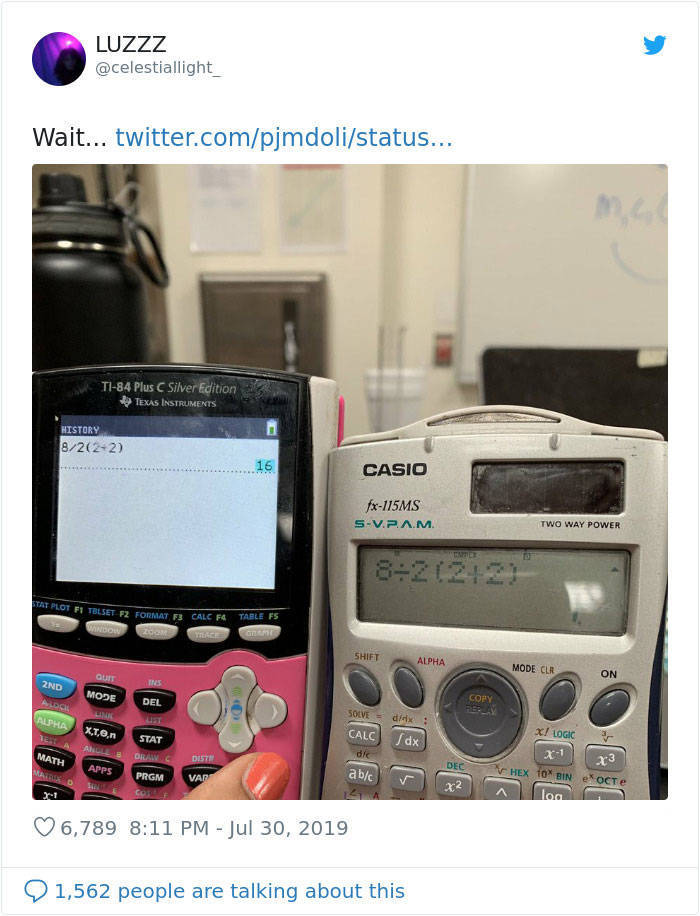 Odds are that you got one of two answers: you either belong to the huge swathe of internet users who got 1 or you’re one of the people whose answer is 16. The internet is raging with amateur and professional mathematicians debating what the real answer is. There may have been some arguments over who’s right. And some shouting. Maybe even some shoving.

Some internet users used calculators to show everyone that the answer was 16. Others referred to their ‘maths degrees’ as an appeal of authority to demonstrate that the answer was 1. Others still took this equation business a bit more seriously than you would expect, and suggested that both answers were correct… depending on what rules you use to figure out the answer.

The reason why there’s a lack of consensus regarding this equation is a fairly simple one. Different people are using different rules about what order everything should be calculated in. Whether, after adding 2 and 2 together in the brackets, you should divide 8 by 2 first or multiply what’s in the brackets by 2, instead. This sounds like a basic disagreement, but people got very heated over this. 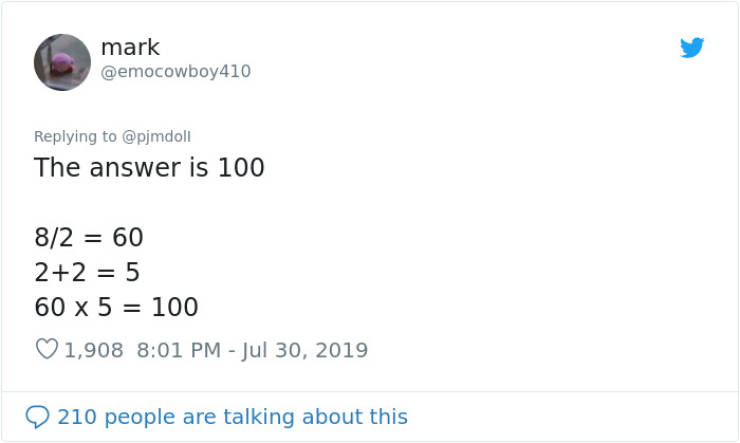 Robert Glenn Howard, a social psychologist at the University of Wisconsin–Madison, told Slate that such equations are the same as riddles and games, and people get heated over such things because Facebook and other forums are a place for discussion: “People are already primed to engage in pretty intense deliberations, and that can bleed over into the way they play games.”

“Humans have used riddles as a form of play since ancient times,” Howard explained. “And sometimes people can get competitive and wrapped up in it.”

Just in case you were wondering, the answer to the equation is 16. No, wait. Never mind. Yep. Definitely 16. Definitely. 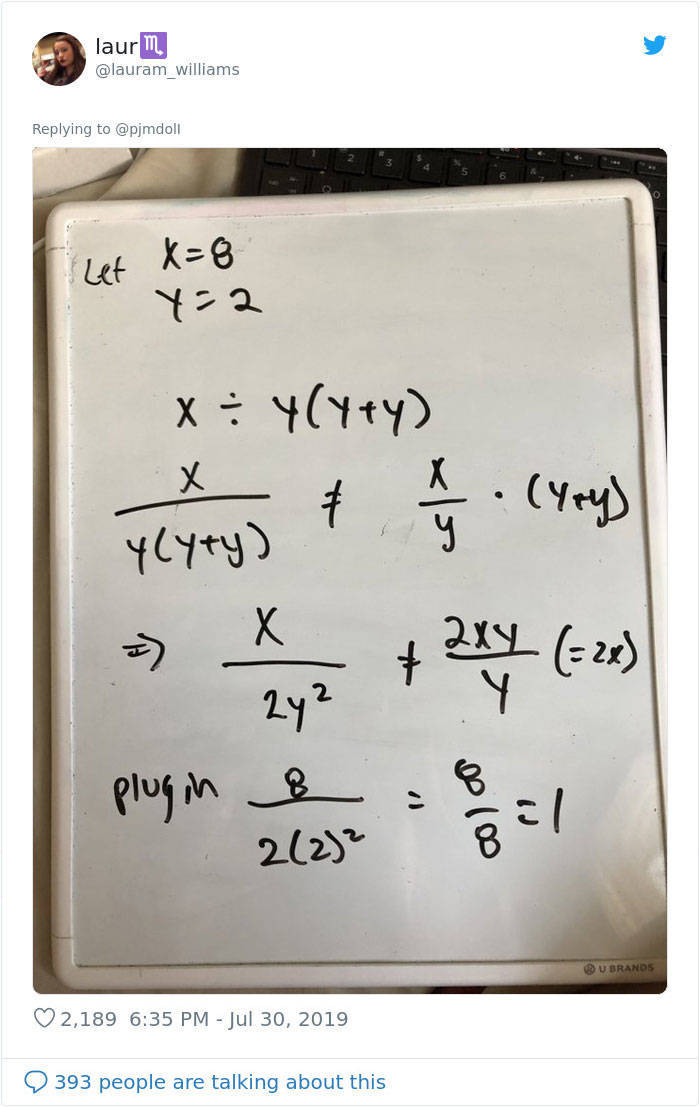 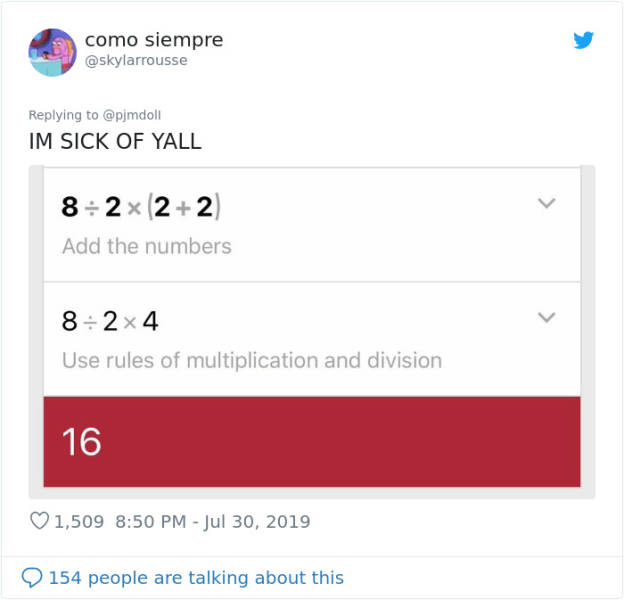 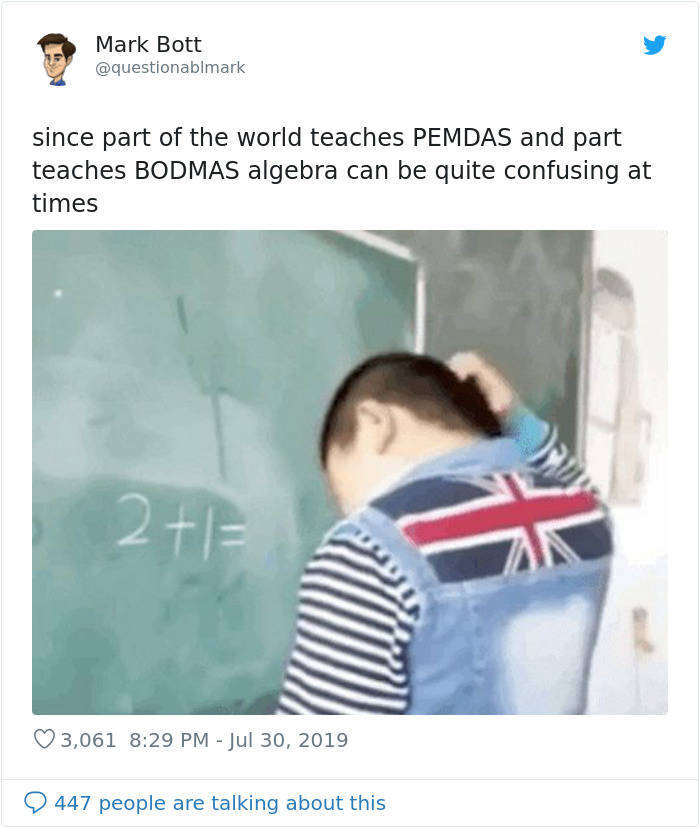 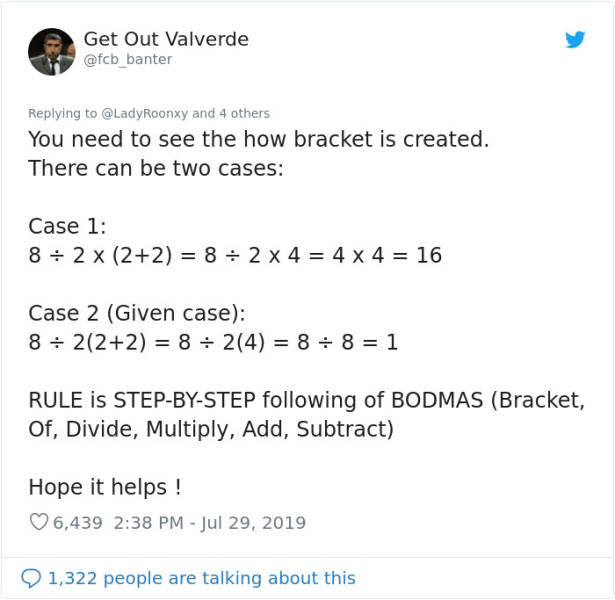 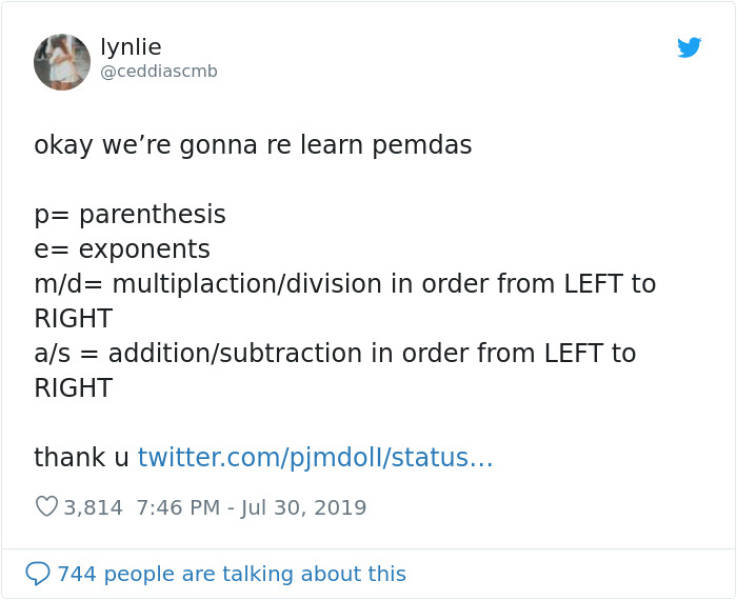 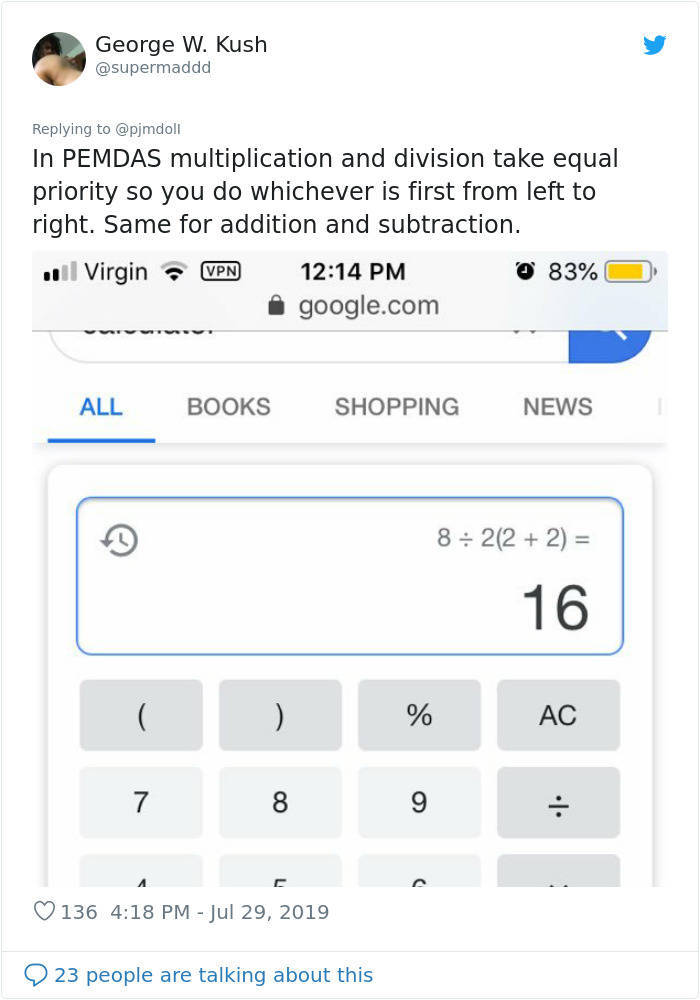 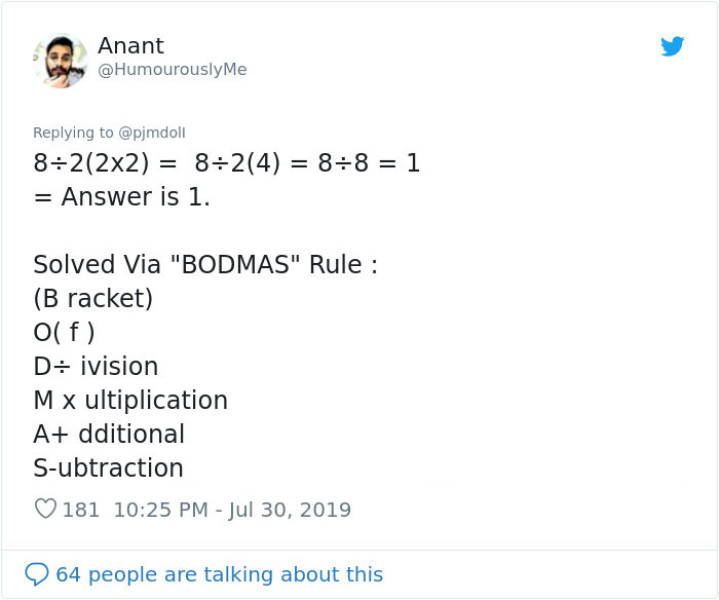 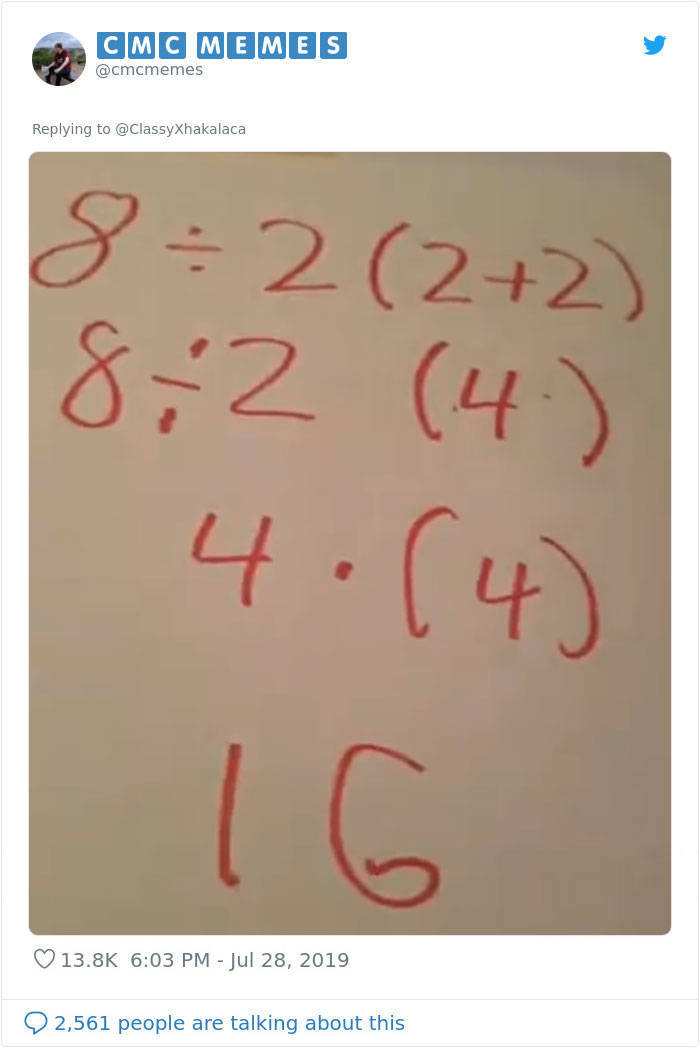 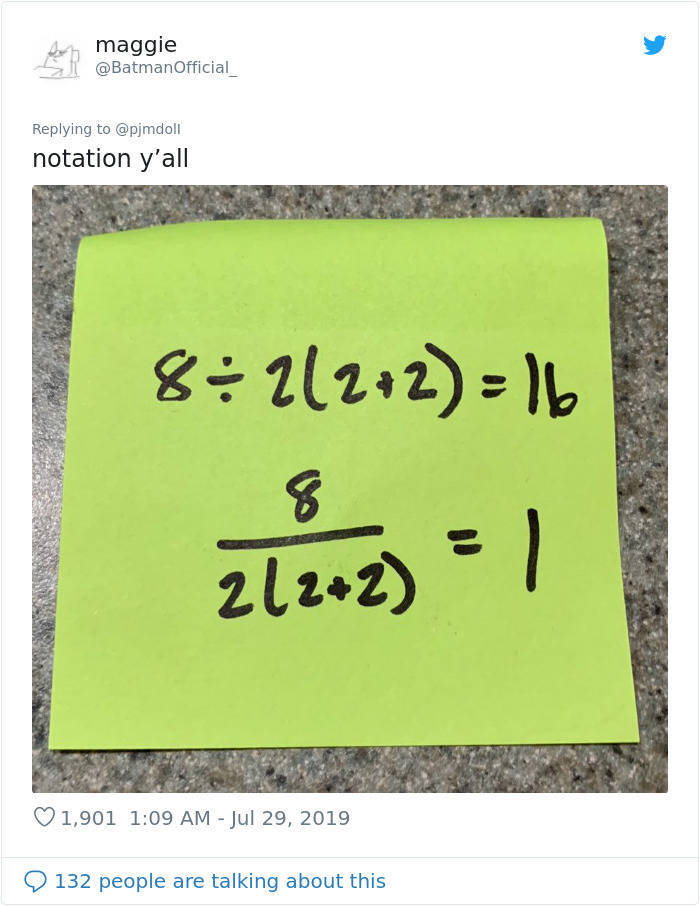 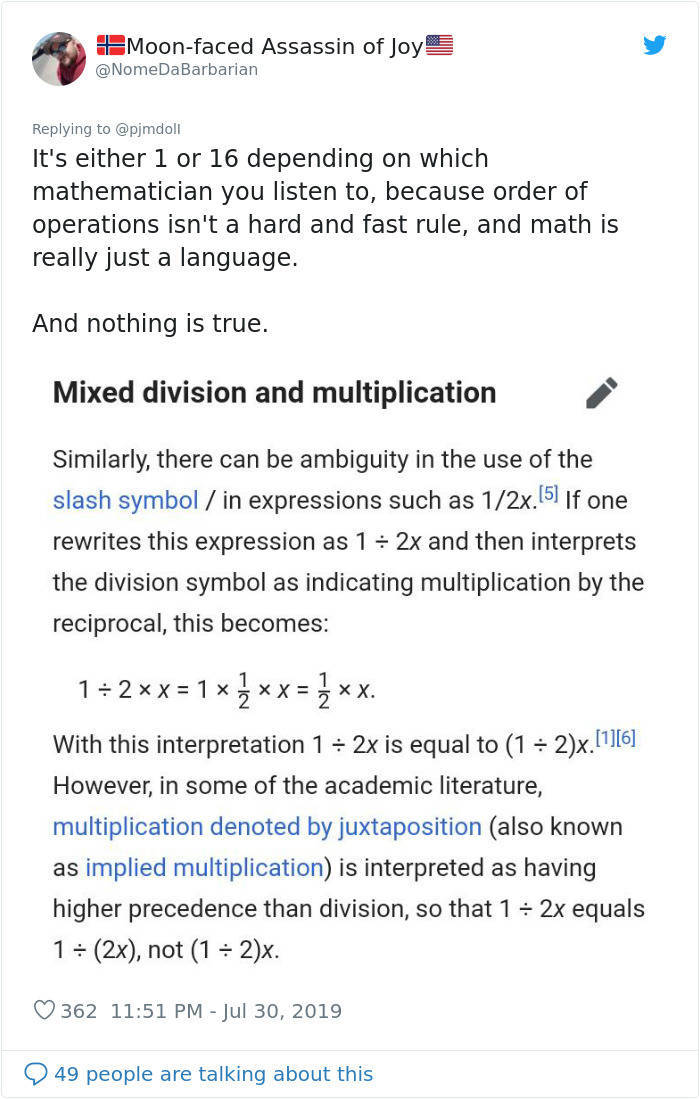 August 1 year ago
The answer is 1. When you advance far enough in math you get to chaos theory, quantum physics and swarm dynamics. Then you discover that everything you learned is wrong. (Start with the cat in the box) We as humans are defined because we use the decimal system, our way of calculating value, time and distance.

Mushroom 1 year ago
Depends of rules. If 2(2+2) actually means 2∙(2+2) then 16, if not then 1.
It simple examle, in math there are much more undefined example like matrices, which one you use row-oriented or column-oriented matrix by subscription they looks indentical it can be ether row oriented or column oriented:
|2 4 3|
|6 7 8|
|9 8 2|
Same about ∙ it can be scalar multiplication or dot product in geometry.
Good math article always define operation subscription before writing formula.
Reply
0

Forget 1 year ago
16 is only the correct answer when you treat the equation as:
(8÷2)(2+2)
... which it appears that some calculators are doing.