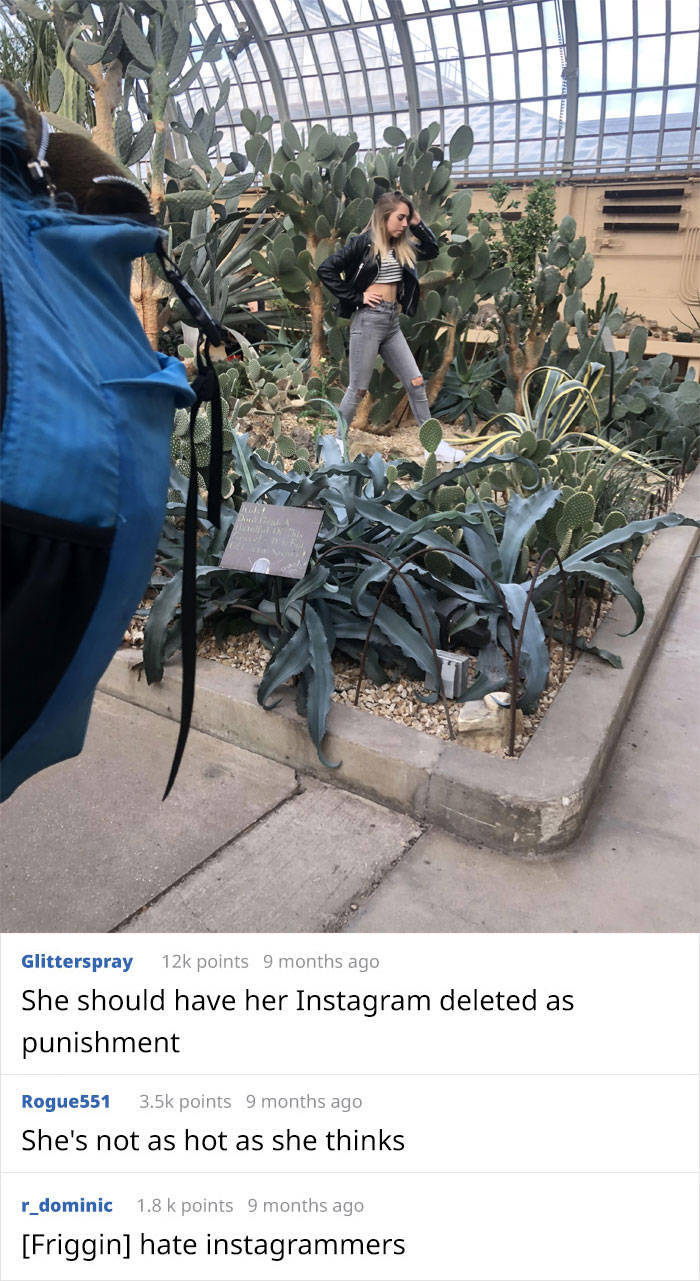 This woman, in her quest to show off to maximum effect on her social media, stomped all over the plants in this Conservatory despite staff repeatedly asking her to stop.

According to Rainy_Day_May, who uploaded the pic on Reddit, "She was asked by multiple people to stop and ignored everyone. Security eventually came and escorted her and her photographer out of the building. Both were asked to not return."

When You Come To Auschwitz Museum Remember You Are At The Site Where Over 1 Million People Were Killed. Respect Their Memory. There Are Better Places To Learn How To Walk On A Balance Beam Than The Site Which Symbolizes Deportation Of Hundreds Of Thousands To Their Deaths

People that choose to visit Auschwitz could go to pay their respects, learn about the true extent of human barbarism and come away deeply affected; using the knowledge and empathy gained from the experience to become a more caring person.

Or, they could disrespect and disregard the gravity of the site, learning nothing while looking for photo opportunities to impress their Instagram followers with.

The Auschwitz Museum urges people to do the former - using the site as a background for your selfies is disrespectful and unnecessary.

Instagram Model Compares Her Life To Rice Workers, Gets Called Out For Being Insensitive

Instagrammer Natalie Schlater has 12K followers and 652 posts under her belt, but this particular one caused a lot of heat online.

At first glance, this picture of Schlater in a bikini in front of a rice farm looks a lot like her other uploads. But it’s the caption that stands out. “Thinking about how different my life is from the man picking in the rice field every morning,” it read.

People immediately thought Natalie came across as a shallow, entitled person but the woman herself said it the whole thing was a big misunderstanding.

Perhaps if these influencers didn't feel the need to accompany these 'deep and meaningful' thoughts with pictures of their [email protected]#es, people might not find them quite so ridiculous? 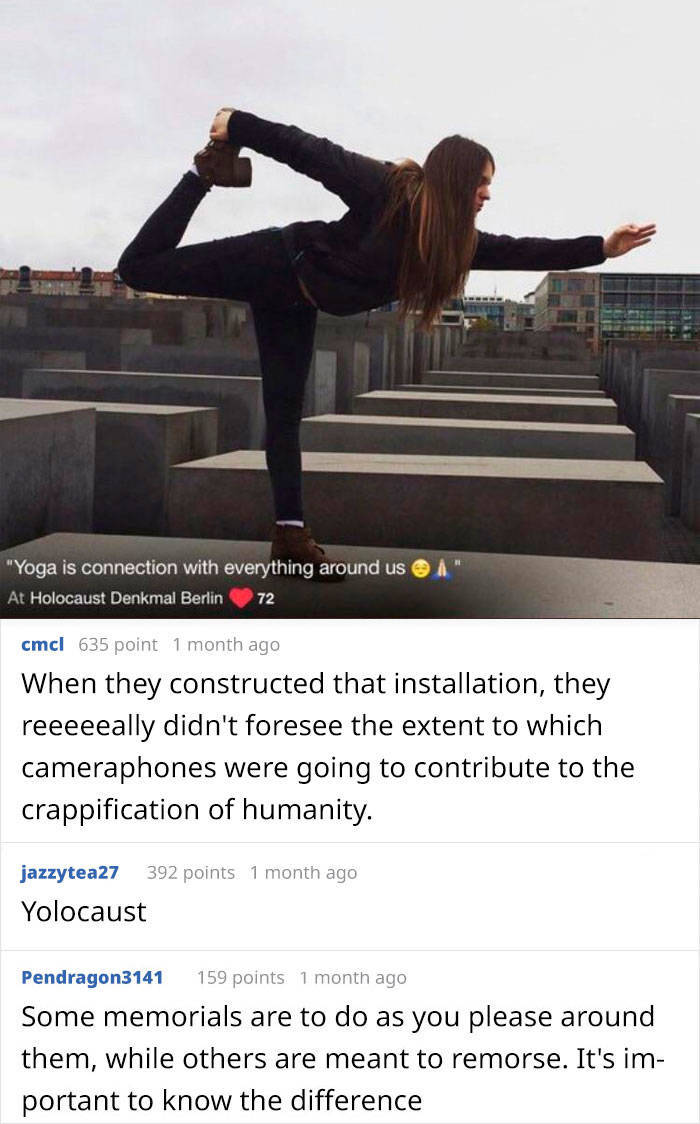 Similar to Auschwitz, these somber memorial sites are there to remind us of the horrors of our past; they are places of learning, reflection and introspection.

Visiting these places and making them all about yourself is not only extremely narcissistic, but disrespectful to the memory of those who were affected by tragedy.

This woman was called out on the subreddit r/trashy for striking a yoga pose on a Holocaust memorial in Berlin, where comments were divided on the intention of the artist who created the memorial. 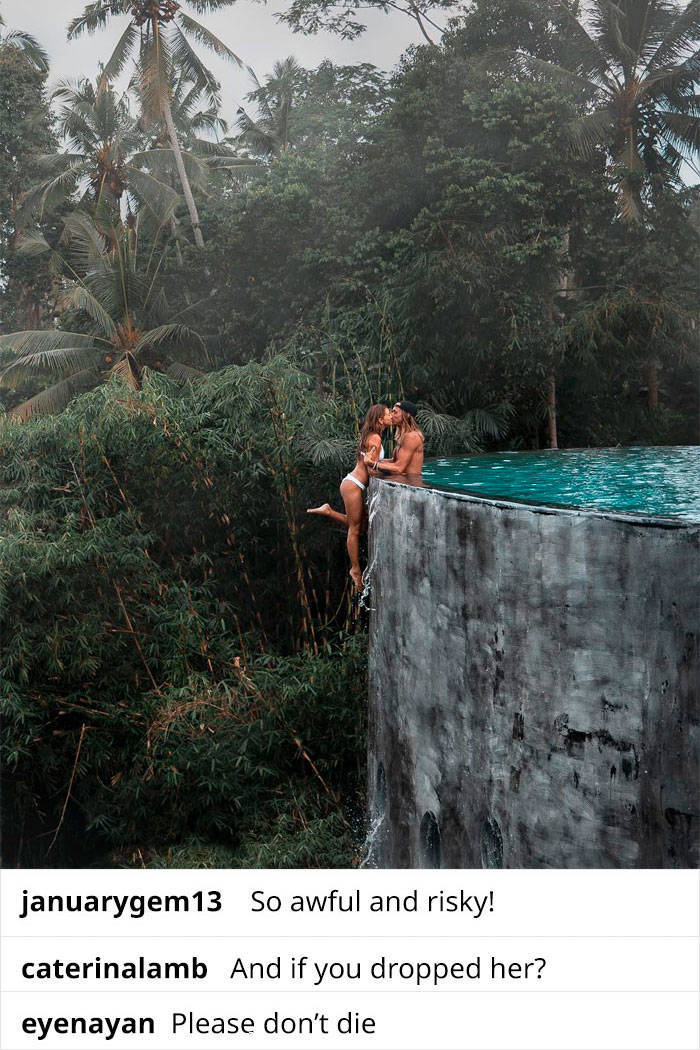 Kelly and Kody, also known as ‘positravelty’, are 'adventurers' who spend their time travelling (AKA looking for photo locations) to share their images on Instagram.

This photo was criticized by some of their followers, however. It depicts the pair kissing while Kelly hangs over the side of an infinity pool, with a steep drop beneath her.

Why? Because apparently it shows trust and Kody's manly, popeye-like strength. The problem with dangerous shots like this is that influencers tend to all follow each other, and a 'trend' shot like this one is sure to lead to an accident at some stage.

This Vigilante Shames Influencers For Bad Behavior In National Parks

It's one thing making yourself look stupid with your complete lack of tact or self-awareness, but something else entirely when you damage the environment while doing so.

The Instagram account Our Public Lands Hate You is part of a trend of shaming irresponsible behavior on America’s public lands. The account's vigilant exposure of misbehaving influencers has so far lead to some of them losing deals with brands, as well as investigations from the National Park Service.

"I started this account about a year ago after a backcountry hike in Idaho where I noticed a ton of disrespect towards our public lands including people carving their names into trees, camping in off limits areas, having fires where they weren't allowed, leaving campfires burning unattended, shortcutting switchbacks, and other behavior that degrades our public lands, Steve, the man behind the account, told.

"After seeing the results of that disrespectful behavior, I decided to create an IG account to share the damage that I was seeing and vent my frustration in the hopes of bringing awareness to the issue and getting people to be more aware of the impact of their actions. The reason I choose IG as my platform was because I had noticed an increase in the number of "influencers" using our public lands as a backdrop to advertise products, services, and themselves, and much of the content these influencers were sharing featured illegal and/or environmentally harmful content."

"I believe that rather that influencing people toward good behavior, many influencers are only thinking about how they can create the most visually appealing content that will garner the most likes and make them the most money. Anything relating good stewardship of the land they are using to create their content appears to have become an afterthought for the vast majority of influencers. I also think that many influencers believe the rules don't apply to them for some reason."

"With over 58,000 followers, the goal of the account is twofold. First, we provide educational content using good and bad examples to SHOW people how to become between stewards of their public lands and provide visuals about what good behavior and harmful behavior looks like. Second, we reshare harmful and illegal content, primarily from large influencer accounts, that is publicly posted to social media so that that everyone can see what these influencers are promoting, and leave respectful, educational comments if they see fit. If influencers are not capable of holding themselves accountable for the respectful treatment of our public lands, then all of us, the people that own those public lands, have a right to voice our opinions and let these influencers know how we feel about their actions."

Instagrammer Called Out For Faking Her Trip To Paris

WIth its bevy of filters and editing tools, most Instagram photos are already far from the actual reality. For some influencers though, the fakery doesn't go far enough, and they resort to photoshopping to engineer an even more absurdly false version of their lives.

Swedish influencer Johanna Olsson got in hot water for trying to fool her followers during a trip to Paris, which, she assures everyone, did actually happen.

"I wanted to talk a little bit about the pictures I posted in Paris. So, I did one picture, shot it and didn’t think it looked that nice… so I took a different background and put the background into it," she explained in an Instagram story.

"And when I put it up nobody noticed so I thought, this is good. So I admit it wasn’t my finest Photoshop skills. Now in Sweden this thing has gone crazy and TV shows want me to come on and talk about my ‘fake travelling’."

"It’s a bit ridiculous I think. There are a lot of influencers out there that use Photoshop in birds, rainbows or crazy skies and I could do that but I don’t like that. I just wanted to make that clear that I was in Paris, but I did Photoshop the background, but I’m not going to take them down because it’s a collaboration and they’re nice pictures – it’s a good outfit!" 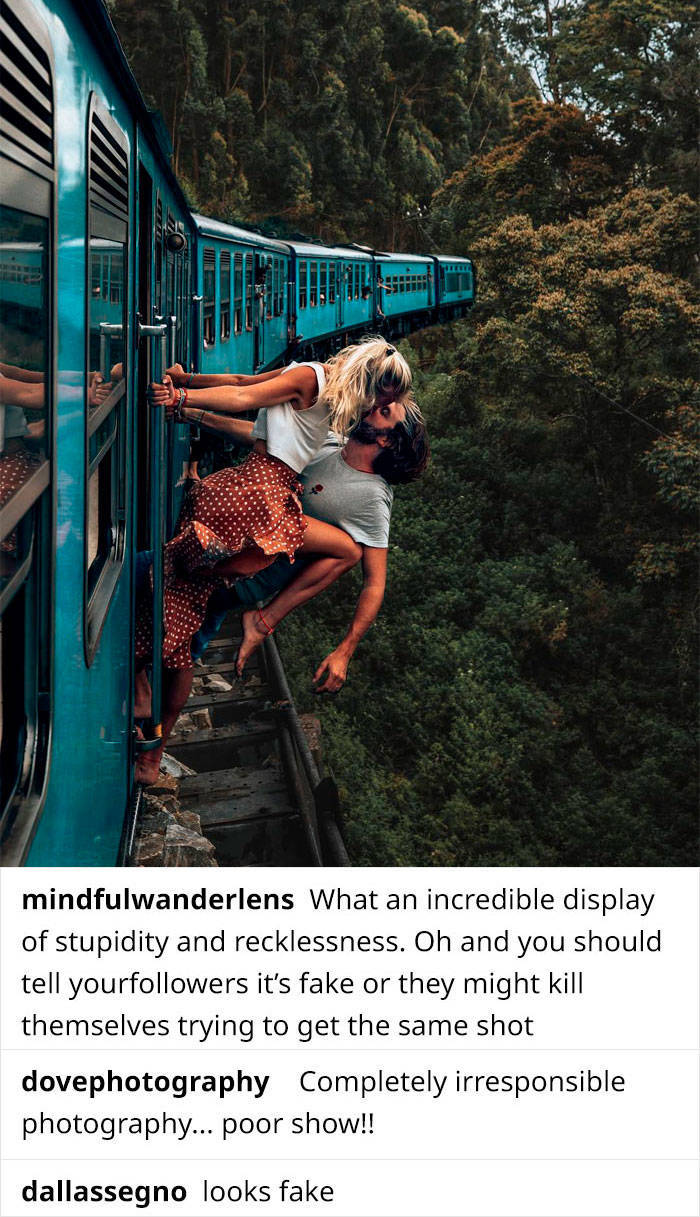 This is another example of influencers following each other. Someone first took a pic of themselves hanging off one of the 'blue trains' in Sri Lanka a few years back and now the trains are full of Westerners all hanging out trying to capture the very same shot.

Belgian couple Camille and Jean, known as ‘backpackdiariez’ on Instagram, just had to take the unoriginal idea a step further and up the risk factor. Their kiss over a bridge prompted people to question why, and urge others not to copy this dangerous pose.

What the Sri Lankans must think, with their trains suddenly full of camera wielding, seemingly suicidal Westerners trying to capture the same shot, is anyone's guess.

Hbo ‘Chernobyl’ Creator Calls Out Influencers After These Pictures

On the back of the success of HBO’s Chernobyl, influencers have been flocking to Pripyat to pose for photos, giving little historical context about what actually occurred there but pulling plenty of the usual vapid, cliched poses that we’ve come to expect from these people.

How do you express remorse and condolences after a terrible tragedy? Personally, if I don't have contact with those personally affected, I keep my thoughts to myself.

These people saw the opportunity not only to show the world how sincere and caring they, but also to crowbar in another photo of themselves and their athletic bodies - just to add to the gravity of the situation.

Because nothing screams solidarity in grief more than smiley, sexy photos of oneself, does it?

With so many influencers out there clamouring for attention, each claiming to be special, you have to go a long way to stand out.

This girl, influencer and model Sarah McDaniel, decided to claim that she had Heterochromia, a condition that creates a difference in the colors of the iris or skin.

McDaniel was called out by infamous exposer Celebface, who posted a childhood photo that showed McDaniel with matching brown irises.

“Expectation: A poor girl with different-colored eyes,” Celebface wrote. “Reality: An ordinary liar who had eye color surgery and tells everyone about her ‘real’ heterochromia now.”

McDaniel's estranged father apparently confirmed the lie, when commenting on one of her Instagram posts.

I guess this is a way to help pay for that expensive wedding... Not exactly a picture of romance but at least this doesn't harm anyone or anything beyond the bride's dignity, which surely took an absolute battering. I mean, a cheap and nasty energy drink? At least if you are going to sell out on your wedding day, you could choose a classier product.

Each to their own I guess?

ChrisR 9 month s ago
They are simple click wh*res, nothing more. They should become real wh*res instead and actually accomplish something useful.

So: Stop following these so called "influencers" and start following an artist or a designer instead. Then you'll see less things to remind you of whatever you don't like about yourself and more things making you realize what humans can actually create. Maybe you'll even be inspired to create something yourself.
Reply
1

Gun 9 month s ago
At 20 something, you only influence the air around you; the real influencers you find them in the history books.
Reply
4

salamoon 9 month s ago
i'm sick and tired from all those influencers and instagrammers.... nobody cares about your staged life, FFS!