This Is Why Some Countries Hate Tourists (20 pics)

The so-called “duckbill” sandstone formation was one of Oregon’s icons, protected by a fence to keep away people because it was unstable. However, this didn’t stop some vandals from climbing over the fence and pushing and pulling on the rock formation. Eventually, they knocked the rock down. Allegedly, the group of people did this because one of their friends had broken their leg because of the “duckbill”. The rock formation was also known as “Pedestal Rock” and “that Pacific Northwest rock.”

Tourists picked all the lotus flowers in the Longqiao Cultural and Ecological Park which is located in Sichuan, China. The park was supposed to reopen soon, but had to stay closed after the tourists’ actions. Summer blossom season started in June and ever since then, Chinese tourists have been breaking into the park to pick the flowers. However, some tourists did more than that: they also went fishing by the stream and destroyed the park fences. Since March, the fences were mended five times so far. A park representative stated that they “cannot control the tourists.” 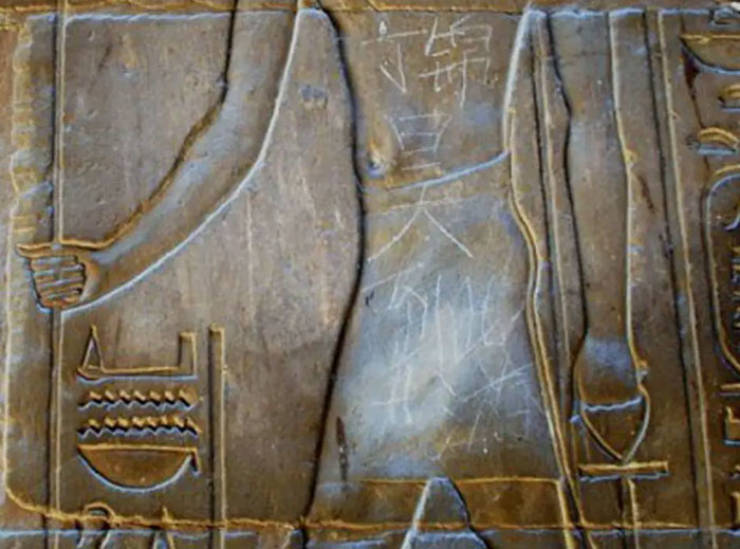 A 15-year-old Chinese teenager from Nanjing named Ding Jinhao scratched his name into Ancient Egyptian artwork at the Temple of Luxor, on the East bank of the Nile. Internet users quickly found the culprit, eventually forcing the boy’s parents to apologize for what he did. The teenager wrote: “Ding Jinhao was here” in Mandarin on the 3,500-year-old artwork. 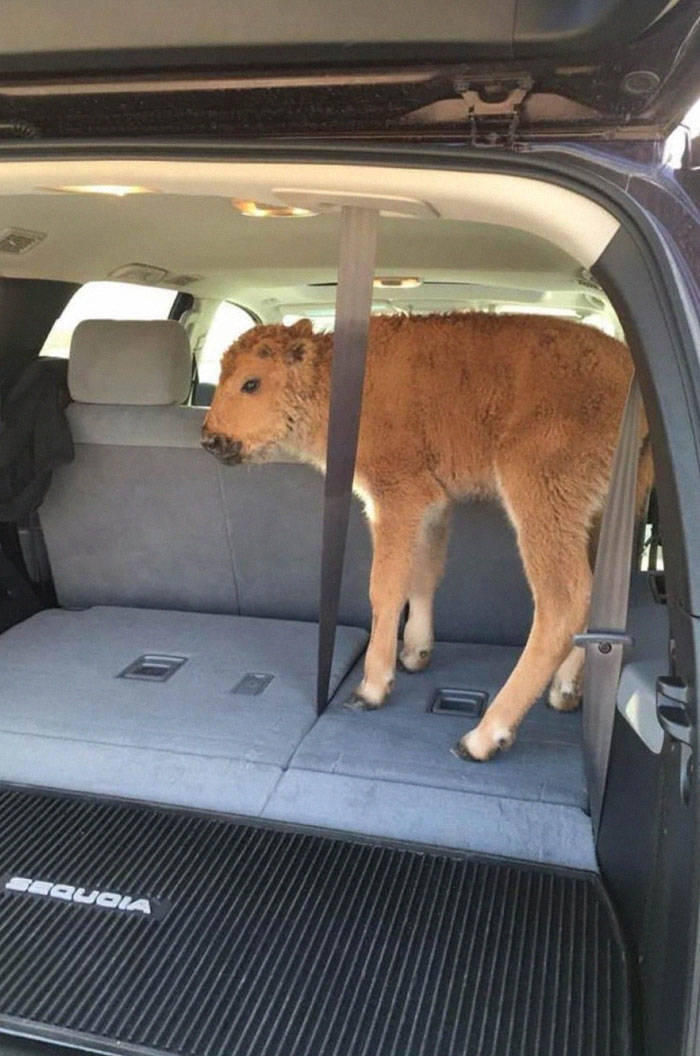 Two tourists thought they were doing a good deed when in fact they were dooming an animal. The pair found a bison calf near a road in Yellowstone National Park and put it into their car so it would be warm. This act sealed the baby bison’s fate: it was no longer clear where it came from and which bison was its mother, meaning it couldn’t be reunited with its herd. What’s more, it started approaching people and cars on the road, creating dangerous situations. The bison had to be euthanized because two tourists couldn’t leave wildlife alone like they should have.

Tourist Knocked Down The Saint Michael Statue While Trying To Take A Selfie (Lisbon, Portugal) 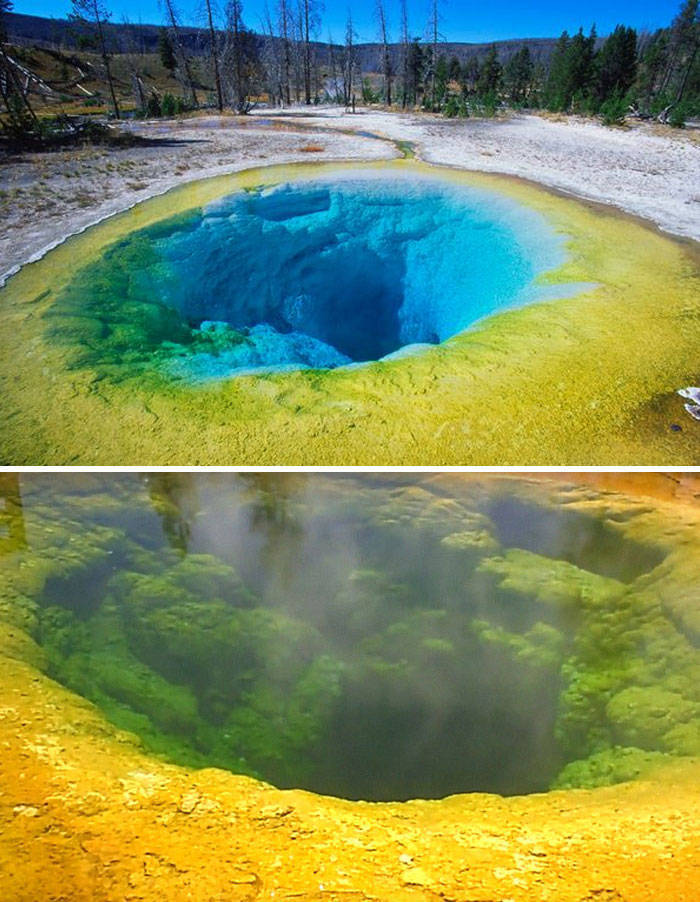 A hot spring pool found in Yellowstone National Park, Wyoming, changed color from crystal blue to yellow-green because tourists kept on throwing coins and rocks into it. The pool is known as Morning Glory, and has recently been nicknamed “Fading Glory” due to how much it has changed. Tourists throw in coins and rocks because they hope that good luck will then follow them. The debris stuck in the pool’s vents has slowed down the water’s circulation, dropping the temperature and allowing the proliferation of bacteria that produce the unusual pigmentation.

Man Climbed Onto The Pedestal The Statue Sits Upon, Attempted To Take A Selfie And Knocked The Statue Over 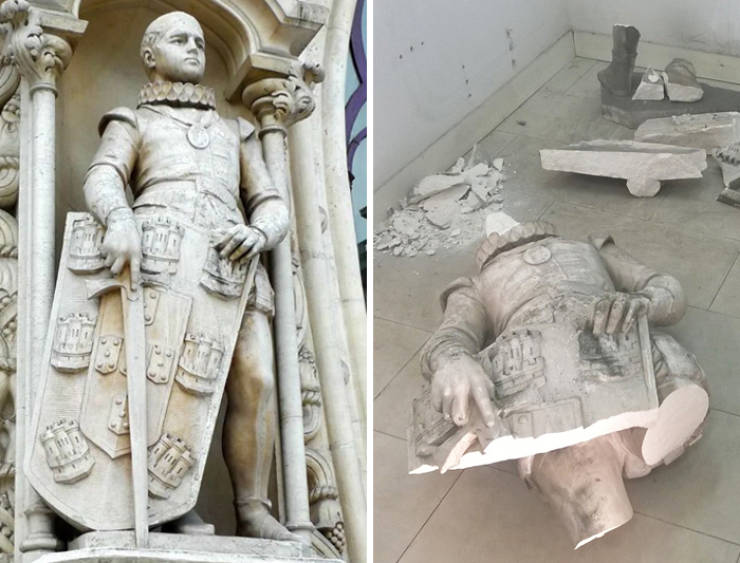 One more victim of tourists who wanted to take selfies was the nearly 130-year-old Dom Sebastiao statue in Lisbon, Portugal. A person climbed onto the pedestal because they wanted to take an impressive photo, but things ended badly. Very badly. The tourist knocked the statue over and broke it into pieces. Police officers arrested the perpetrator after they tried to run away.

Tourists Destroy Beautiful Azalea Trees In Bloom In China: Some Even Use Branches For Barbecue 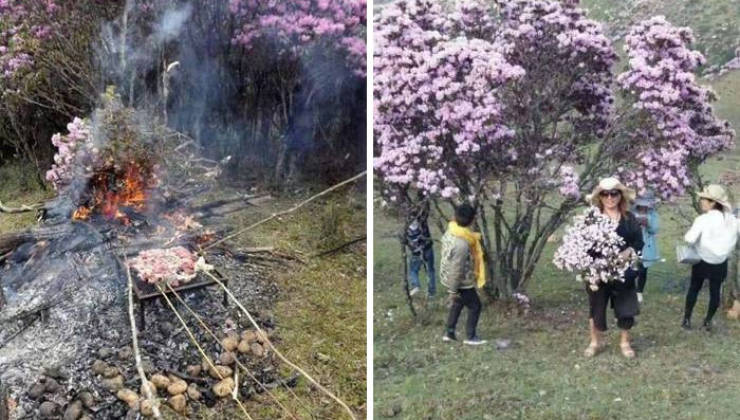 Spring symbolizes rebirth, but this doesn’t give anyone a license to destroy nature for their own pleasure. The Liangshan Yi Autonomous Prefecture in China always draws in tourists who want to enjoy the blooming azalea trees. However, not all tourists are happy with just looking. Some of them broke off branches from the beautiful trees, others picked flowers, while there were even some who pulled trees up with their roots. All of this was for the sake of some pretty photos. One group of vandals even used some branches to start a barbecue.

The Beach Near My House After The Tourists Left 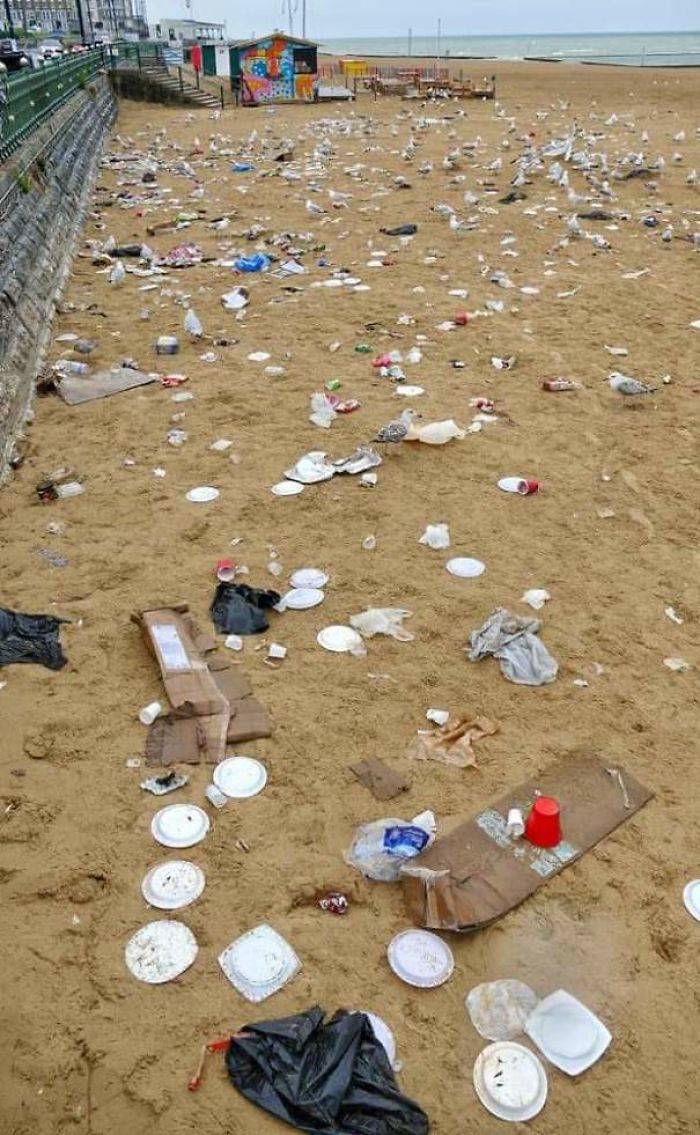 Recently, Margate beach in United Kingdom was covered with empty bottles, paper plates and other dirty "leftovers." According to the BBC, Thanet District Council cleaned up the litter and is trying to identify those responsible.

"We love to see people enjoying our beautiful sandy beaches but the mess that was left on Saturday was shocking and heartbreaking to see," Bob Bayford, the council leader said.

"There were a number of groups on the beach on Saturday and permission had been granted for a 500-person event, at the Nayland Rock end." 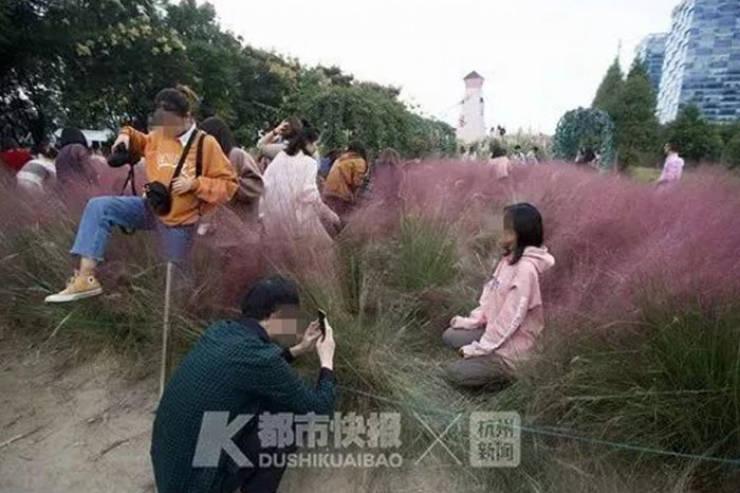 South China Morning Post reported that a field of pink, cloud-like grass flowers in a park in eastern China had to be cut down on Sunday after it was trampled by selfie-taking tourists. These flowers bloom for about two months every autumn, but those in the Binjiang riverside park in the city of Hangzhou were completely destroyed. Photos published by various Chinese media outlets show tourists ignoring rope barriers and flattening the 10-acre area.

Tourists Destroy Natural Wonder By Carving ‘Send Nudes’ Into It 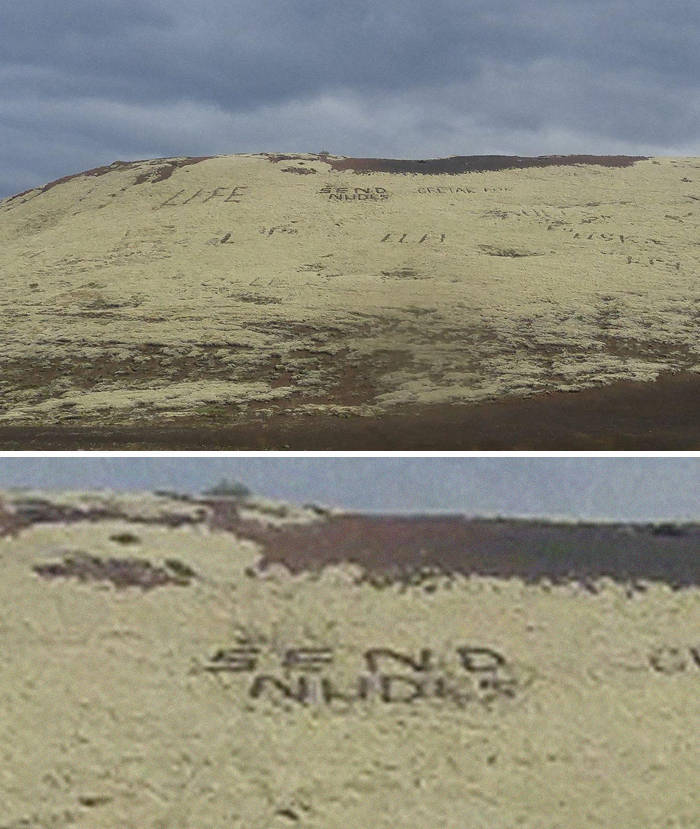 One of Iceland’s famous moss-covered hills was vandalized. Tourists carved in the words “send nudes” into the hill in South Iceland, which means the moss could take many years to regrow. This is far from the only time that tourists targeted this hill — there are more words (and names) carved into the hill. A local tour guide Gunnar Birgisson told the media that an Icelander started the trend when he wrote his name on the hill many years ago. 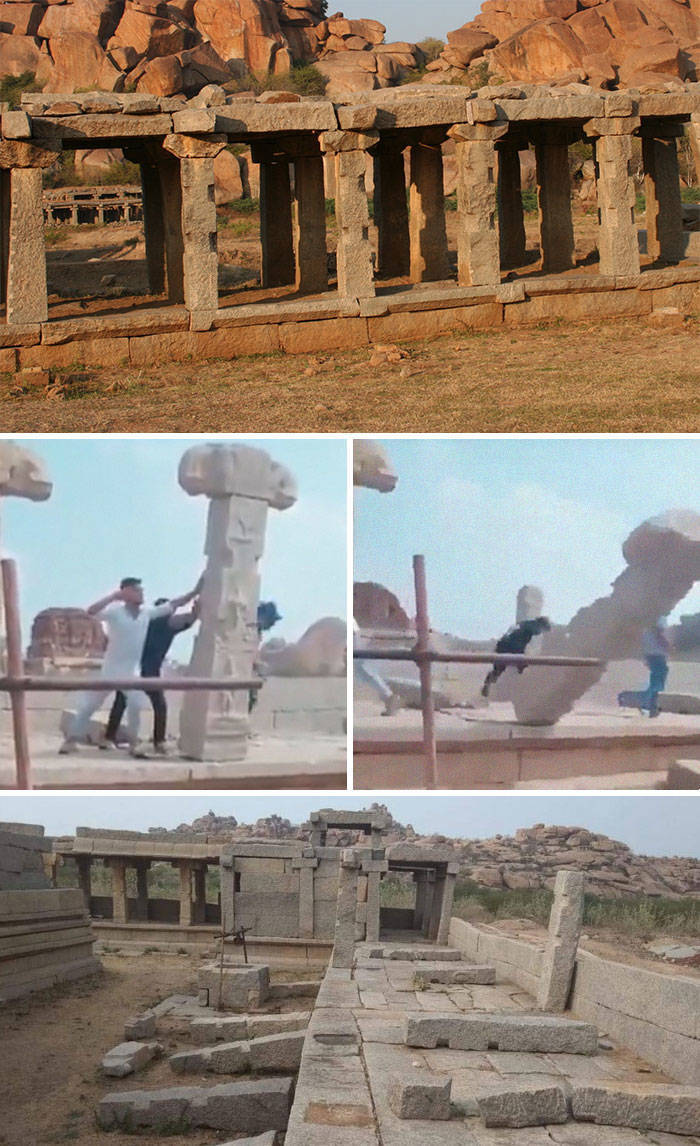 After a few vandals were caught on camera destroying the pillars of the Vishnu temple at the UNESCO world heritage site in Hampi, India, the locals started demanding strict action against them. Roughly a week after the video surfaced, Karnataka police have arrested four people.

All of them confessed to the vandalism. "They were excited [about] seeing the monuments in Hampi," Ballari SP Arun Rangarajan said. "They claim to have toppled the pillar in sheer excitement. They had no idea how historically significant Hampi is."

"All four have been [receiving death threats] since the video went viral."

Hampi is a UNESCO World Heritage Site located in east-central Karnataka, India. It became the centre of the Hindu Vijayanagara Empire capital in the 14th century. By 1500 CE, it was the world's second-largest medieval-era city (surpassed only by Beijing), attracting traders all the way from Persia and Portugal.

Hampi's ruins are spread over 4,100 hectares (16 sq mi) and UNESCO described it as an "austere, grandiose site" of more than 1,600 surviving remains of the last great Hindu kingdom in South India. 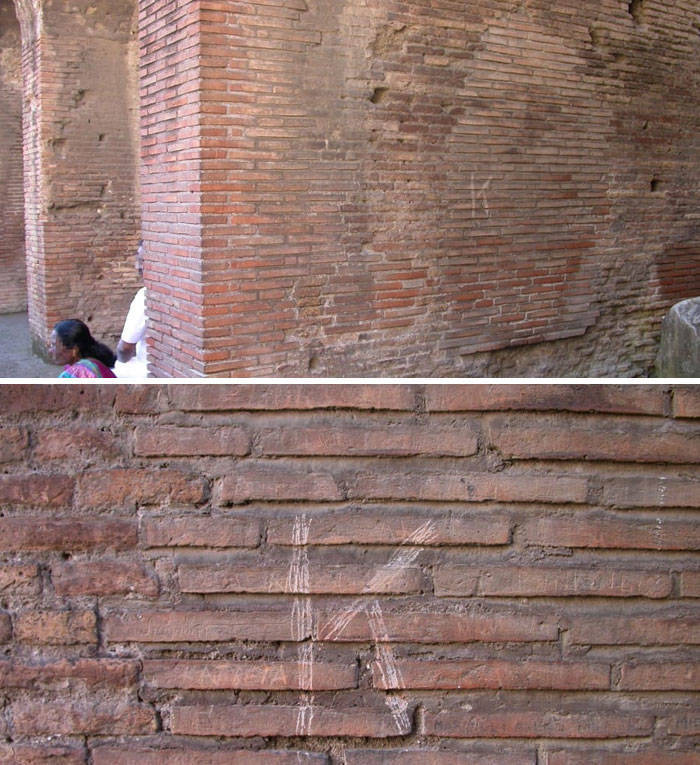 CNN reported that authorities in Rome have slapped a 20,000 euros ($24,800) fine on a Russian tourist who carved his name into one of the city's most famous historic landmarks. The 42-year-old man was apprehended after a guard at the Colosseum saw him scratch the letter "K" in a section of brickwork. The graffiti was found on a ground floor section of the nearly-2,000 year-old structure where restoration work was taking place.

"The damage to the monument is notable," site superintendent Mariarosaria Barbera said. "The incision cut out part of the surface of the structure and compromises its conservation and image." 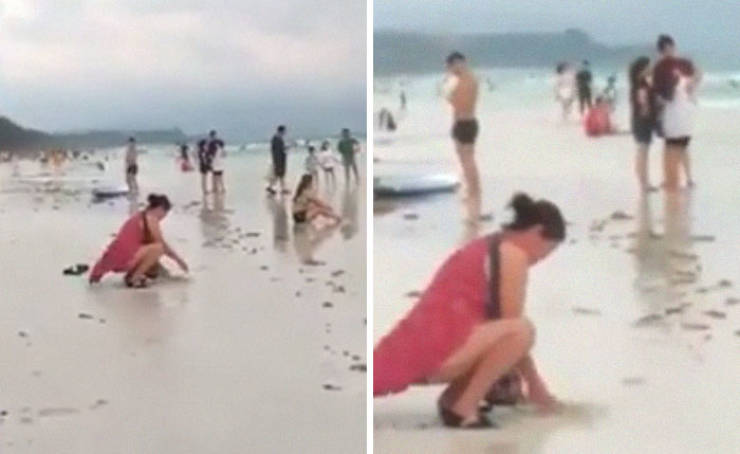 A viral video of tourists burying a soiled diaper in the beach in the Philippines prompted local authorities to close the area for water quality tests. After determining that the water quality remained safe, the Boracay Interagency Task Force reopened the area later in the day.

"This is an unfortunate incident pero [but] we will not tolerate those who violate the law whether foreigner or local. [Everyone should follow the law],” Tourism Secretary Berna Romulo-Puyat told CNN Philippines. She said that authorities will work on aggressively informing tourists about beach rules and regulations.

In April 2018, the world-famous Boracay island underwent a six-month closure and rehabilitation after President Rodrigo Duterte called the island a “cesspool.” 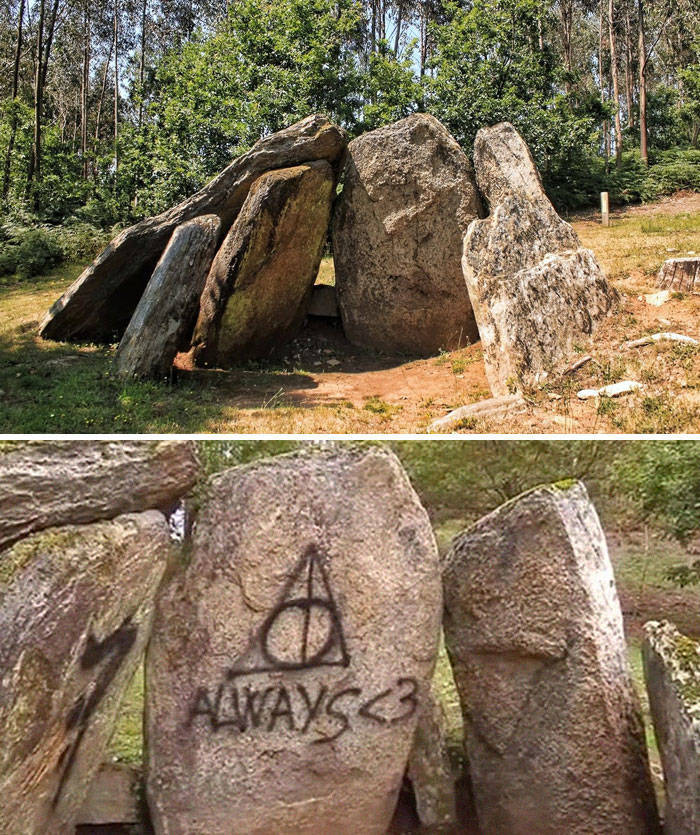 According to The Olive Press, a 'Deathly Hallows' symbol appeared on the La Casa dos Mouros dolmen in Vigo, Galicia. Despite it being a protected site, Mayor Oscar Dominguez didn't want to give the vandal any credit: "Maybe JK Rowling dropped by to promote her latest spin-off,” he joked. "Either way, it is clear that the graffiti was carried out by an amateur in the world of magic."

Selfies aren’t harmless. Locals living in the city of Cremona, Italy, can certainly attest to that. One of the crowning jewels of Cremona is the well-known “Two Hercules” statue. Unfortunately, two tourists broke the marble crown that sits atop the coat-of-arms, flanked by a pair of figures. The incident happened when the tourists climbed on the statue and were taking a selfie. The duo at fault are still to be located. 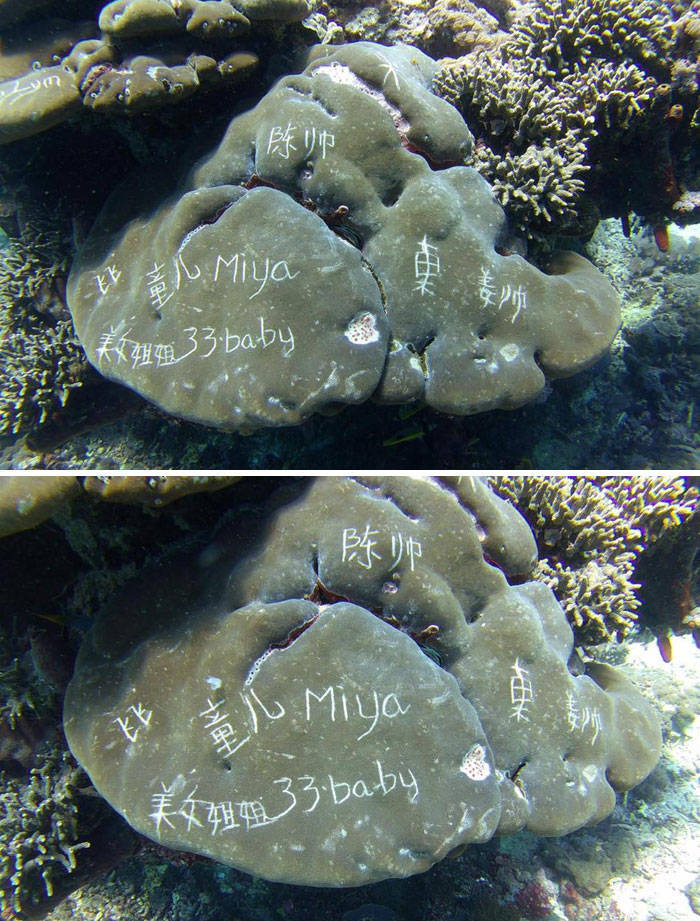 When dive centre OK Divers posted photos of a coral that has been intentionally defaced with words and names etched into it, people were absolutely outraged. As the post went viral, the divers used the opportunity to send an important message: "Like many of you, we believe that their dive guide should have known better than to let them do this," OK Divers said. "Nonetheless, the diver has come forward, they are truly sorry. Even though it won't help the coral, we appreciate their honesty and believe they have learned a lesson they will never forget ... [we ask you to] think of what we all can do to prevent such things from happening and how we can protect the precious underwater world." 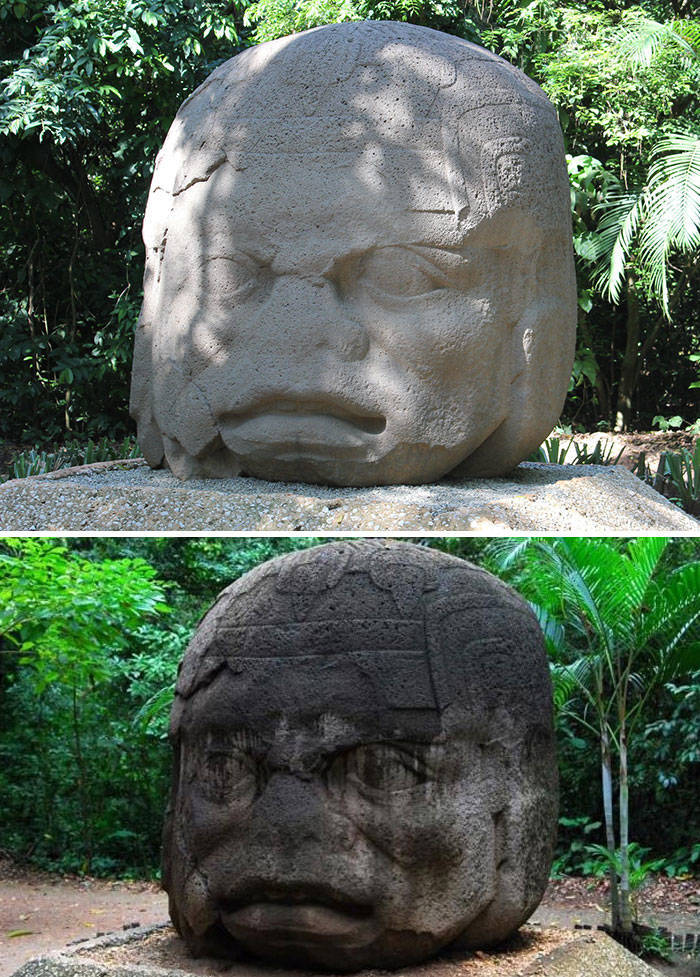 Two tourists from Indonesia vandalized a grand total of 15 sculptures in the La Venta Museum and Park in Tabasco, Mexico. The pair sprayed liquid oil on the archaeological pieces, one of which was the giant Olmec head (pictured), also known as the “The Old Warrior.” What makes things even worse is the fact that the sculptures that were damaged by the tourists dated back to 1,000 BC. 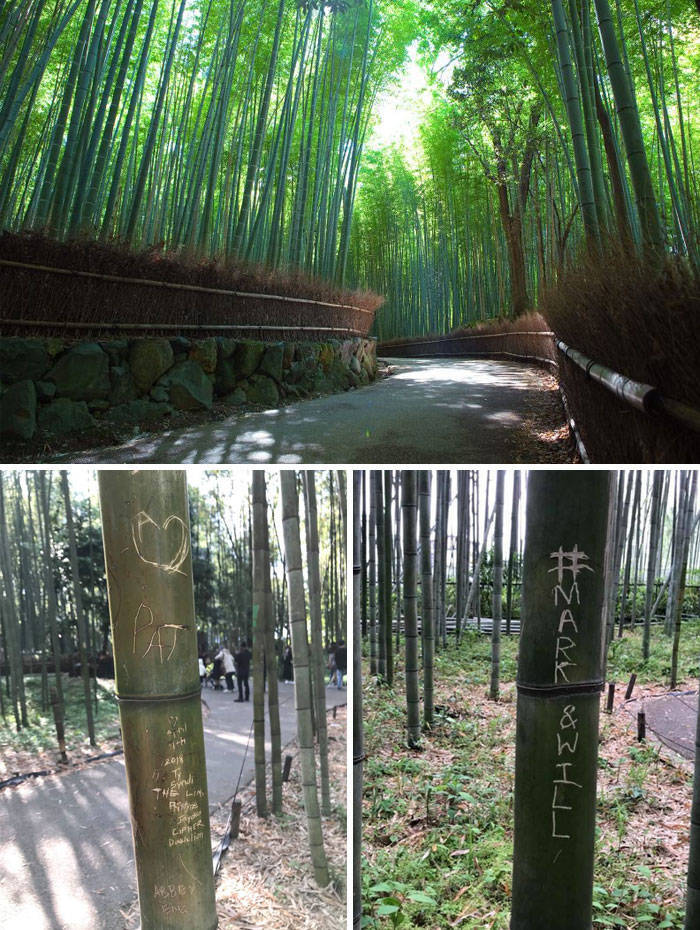 A bamboo forest in Kyoto, Japan, started “crying” after inconsiderate tourists carved graffiti on the trees. The forest has been attracting tourists from all over the world with its breathtaking serenity, but at least 100 bamboo trees have been vandalized with English, Chinese, Korean, and Japanese writings. While maintenance staff has managed to conceal the damages with some green tape, it was reported that the affected trees will eventually be cut down.

Tourists Allegedly Vandalize A Mosque In South Of Morocco 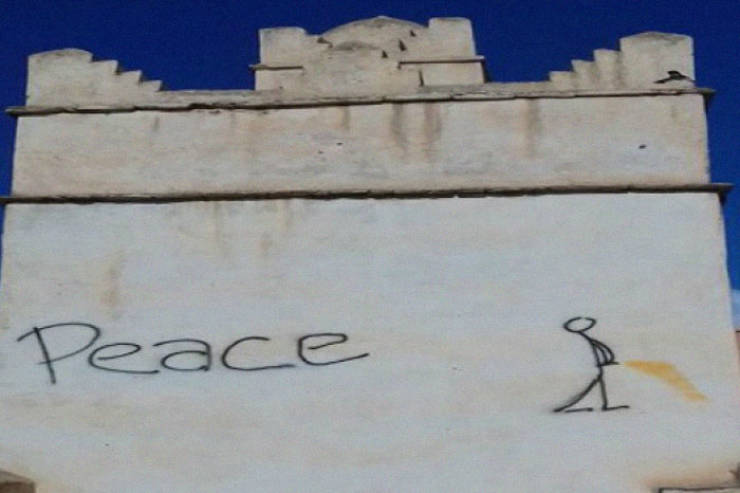 Local news website Tiznit37 reported that tourists who spent nearly a week in a resort called Boutbouqalt desecrated a mosque by leaving offensive insults and drawings on its walls. After this incident went viral, residents of Arbaa Ait Ahmed called the act “savagery,” demanding that the authorities intervene. The police were reported to have opened an investigation.

Golden 1 year ago
Were race is stated or shown in the picture, they are all Asian
Reply
14

Gorgeous 1 year ago
mostly chinese tourists that have no regard for anything but themselves.
Reply
0

Funny 1 year ago
I hate racism and Chinese people.
Reply
3

Star 1 year ago
All I can add is that I hope at least a few of these people are rotting away in foreign flea infested prisons, preferably after being severely caned.
Reply