Fred and Daphne were never in a relationship

Most people figured that Fred and Daphne were dating because they’d always team up when the gang would split up. Then they’d disappear for some supposed shenanigans.

In reality, the creators thought they were the most boring characters, so they chose to focus on Shaggy, Scooby and Velma. They cool ones.

Velma’s recurring bit about her glasses was an improvisation

This running gag was hilarious and had Velma crawling around saying “My glasses! I can’t see without my glasses!”

The credit for this bit goes to the original voice of Velma; Nicole Jaffe. She lost her glasses during an early table read, and said that in Velma’s voice. The writers loved it, and wrote it into practically every episode. 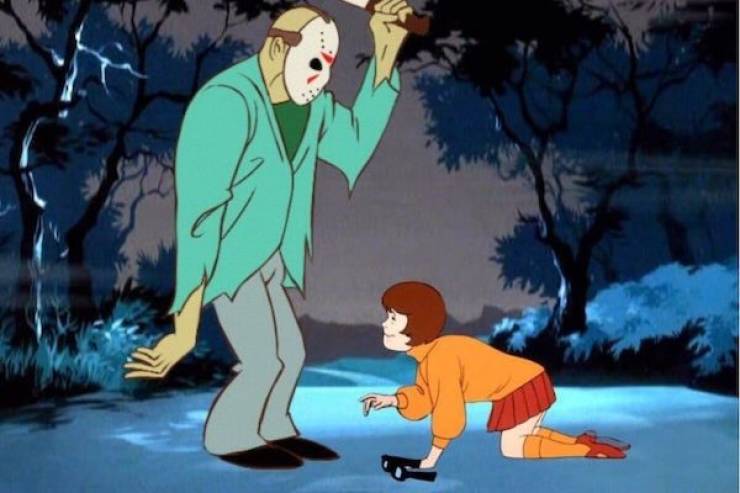 Legendary radio DJ Casey Kasem was the voice of Shaggy from 1969 to 1997, then from 2002 to 2009. For the first part of his tenure as the voice of Shaggy, he had no issues with the character. Then, in 1997, the producers asked Kasem to voice Shaggy for a Burger King commercial, and he refused. In reality, he was a devout vegan.

He asked the producers to make Shaggy a vegan too, and when they refused, he quit. 5 years later, they came to a compromise and had Shaggy switch to vegetarianism, and Kasem came back. 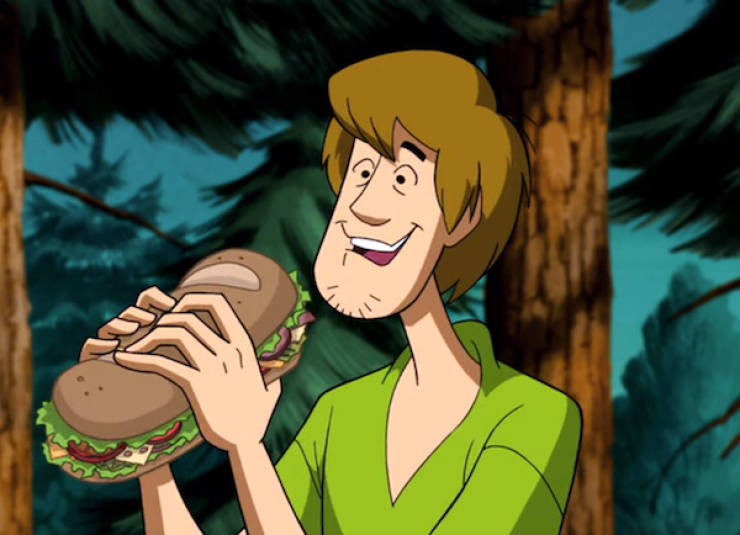 Scooby got his name from a Frank Sinatra song

Originally, Scooby’s name was set to be “Too Much,” but the executives realized that the name sucked.

According to one producer, he was listening to Sinatra’s “Stranger’s in the Night” and loved the part where he sang doo-be-doo-be-doo.” From there he got his full name – Scoobert Doo.

While many people have painted their vans to look like the iconic mystery machine, one woman took it too far. Sharon Turman was wanted for a parole violation in 2016, and when the cops came calling, she took her machine on the run.

Ended up endangering many lives during the car chase, so the cops had to call it off and she actually got away. 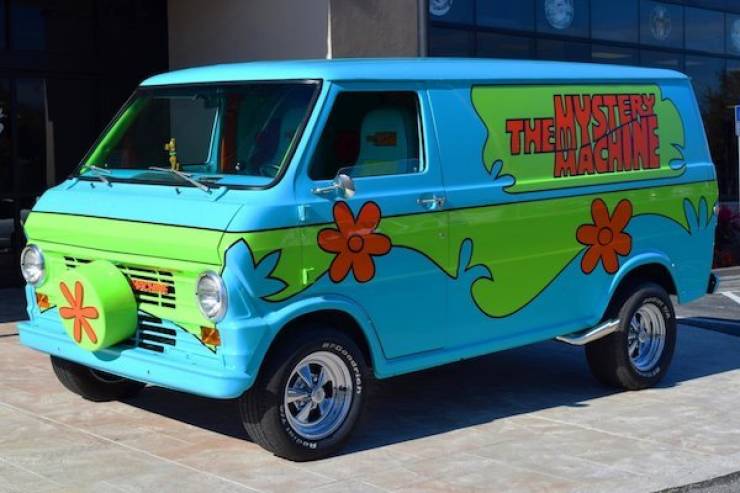 The producers consider Scrappy Doo a huge mistake too

We all make mistakes, and when it comes to showbiz, it always has to do with someone thinking a new character will revitalize a show. Back in 1979, they decided to get rid of Fred, Daphne and Velma, and added in Scrappy; Scooby’s nephew.

He was universally hated by all the fans, and they brought Daphne back in 1983, and the rest of the gang shortly after. Scrappy then went on to become the villain in the first live action movie.

There was a good reason for all the elaborate traps

Half the reason why audiences loved the show, was because it was an action-packed half hour of fun. In fact, most of the top cartoons in the 60’s and 70’s were full of action and violence, which incited parents to write strongly-worded letters and shows got cancelled.

Keeping that in mind, the Scooby gang never resorted to violence, but silly traps and shenanigans to catch the bad guys. Their creativity kept the show going. 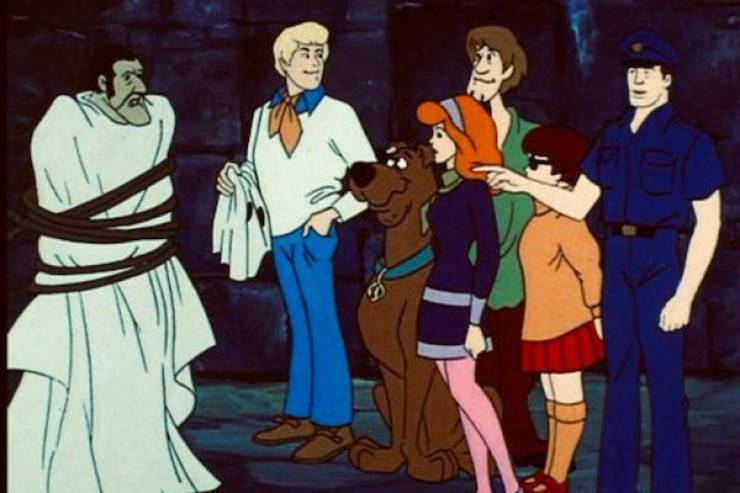 The live-action movie was meant to be much, much darker

But once the cast was signed on, the producers got cold feet and rewrote the movie as a family friendly affair. Plus, Hanna-Barbara likely put their foot down too, to ensure the movie lived up to the show’s legacy.

Considering the original screenwriter was James Gunn, this makes sense. 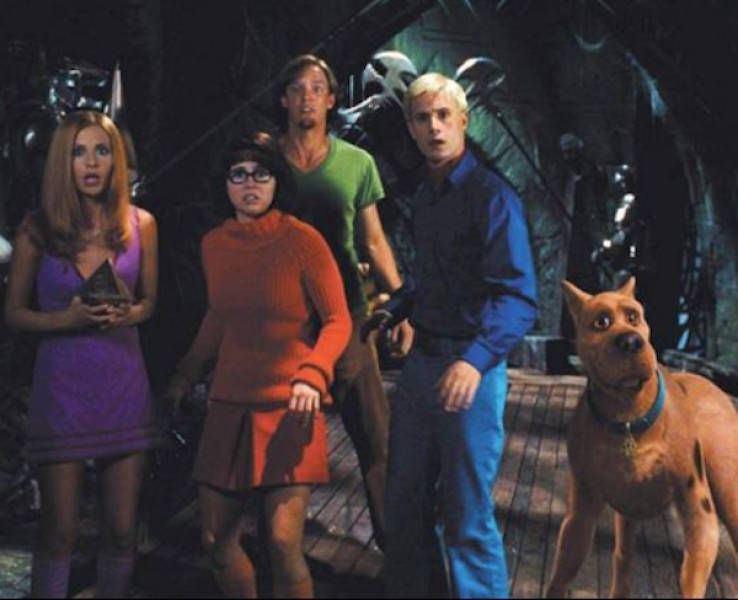 The truth behind Shaggy and his ‘addiction’

The biggest question about the show is whether or not the writers meant to make Shaggy a stoner or not. I mean, don’t forget that he was created in 1969: the summer of love.

While most people think that his hippie vibes, attacks of the munchies and the hallucinogenic qualities of the Scooby Snacks meant that both he and Scoobs were high all the time, but that was never the case. It’s just the way he was written, but he was never really smoking marijuana behind the scenes.

There isn’t a specific reason why the character himself talks that way, but the speech pattern with the rolling R’s in front, is called “Rhotic Replacement.” Some people actually have this speech impediment in real life. 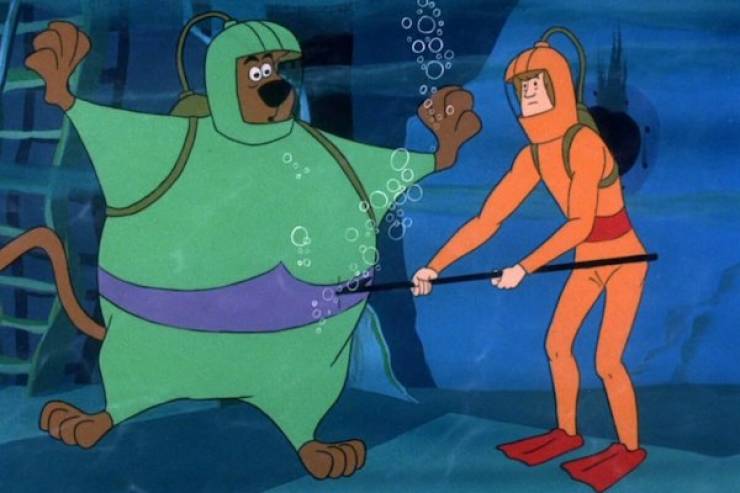 There’s a post-apocalyptic version of the gang out there

Not even the Scooby gang can escape the trend of dark and gritty reboots. There’s a monthly comic from DC called Scooby Apocalypse.

In it, Daphne is the lead scientist who’s created Scooby as an experiment gone wrong. Shaggy ends up being Scooby’s trainer, while Scooby is a hyper-intelligent dog who can communicate with humans. Fred and Daphne are a reporter and cameraman who are recruited to the cause. 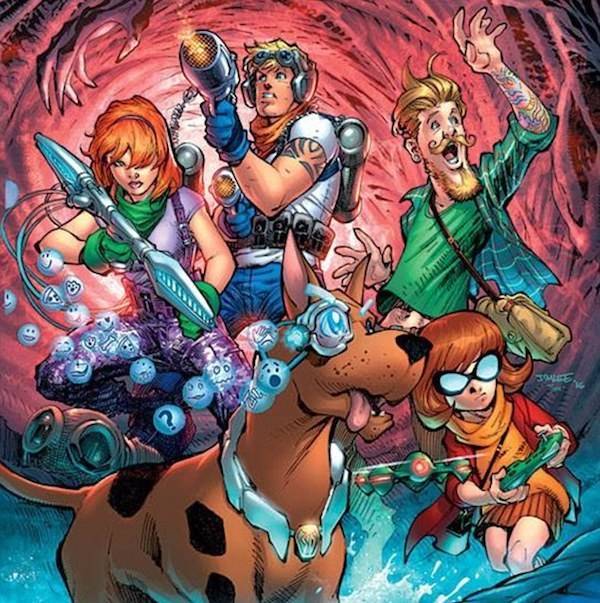 Velma’s not a lesbian

Most people think that since Fred’s got Daphne and Shaggy’s got Scooby, that Velma’s alone because she’s gay. She’s definitely not.

The writers even put Shaggy and Velma together in Scooby Doo: Mystery Incorporated! but still, fans just said that he was her beard.

I always thought Velma was the hottest one too.

The gang was originally a rock band

Before they settled on the premise of a group of teenagers in a funky van, the original plan was a rock band that solved mysteries between gigs. The original pitch even had an extra character.

Going by the original names of Geoff, Mike, Kelly, Linda and WW, they also had a bongo playing dog named Too Much. Thankfully, the network thought that wasn’t a good idea, so they axed the idea and asked Hanna-Barbara to start from scratch. 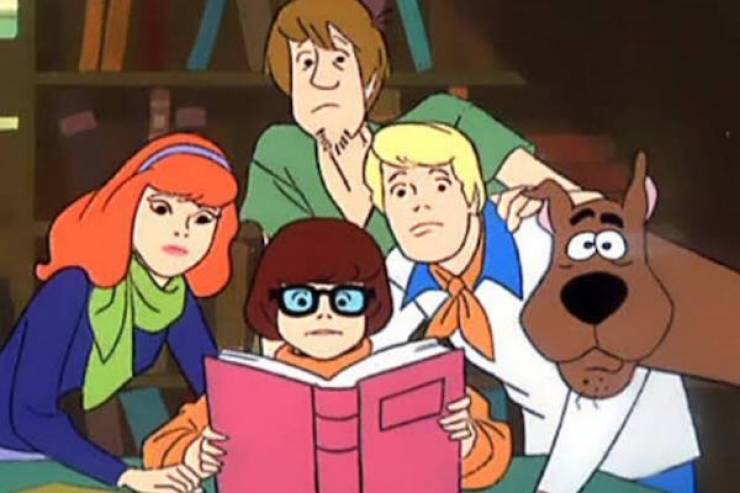 The voice of Fred has been the same guy all along

Despite the iteration of the show, one thing’s always been constant – Fred’s. Frank Welker has been the voice of Fred for over 50 years, and he doesn’t plan on stopping anytime soon.

In case you know the name, pick any favourite cartoon from your childhood. Guaranteed in in it. 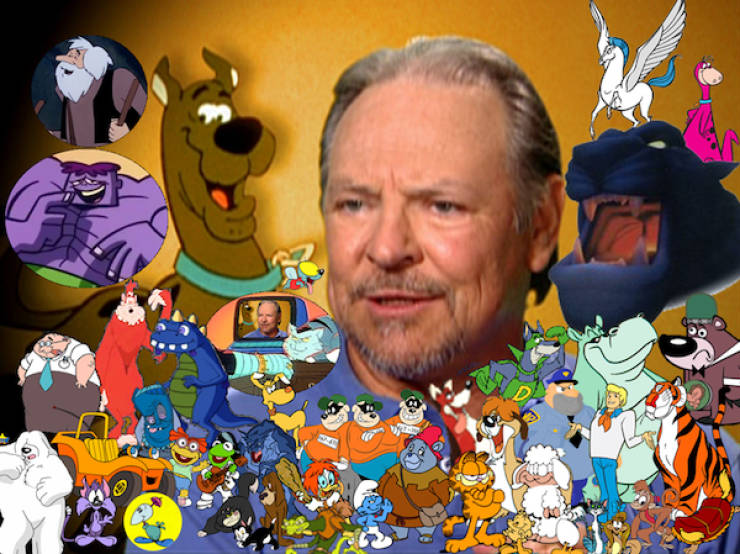 Theory that the show takes place during an economic downturn

There’s a conspiracy theory that suggests that the reason behind all the abandoned hotels, amusement parks and run down islands, is that there’s economic issues.

Hence, why normal people are always trying to make money through nefarious ways like dressing up as monsters. According to the writers, this isn’t true.

Scooby has a strange family His entire family

tree’s never been completely listed, but so far we know of his nephews Scrappy-Doo and Yabba-Doo (a wild west crime fighter) and his siblings Skippy-Doo and 80’s pop star Dooby-Doo. 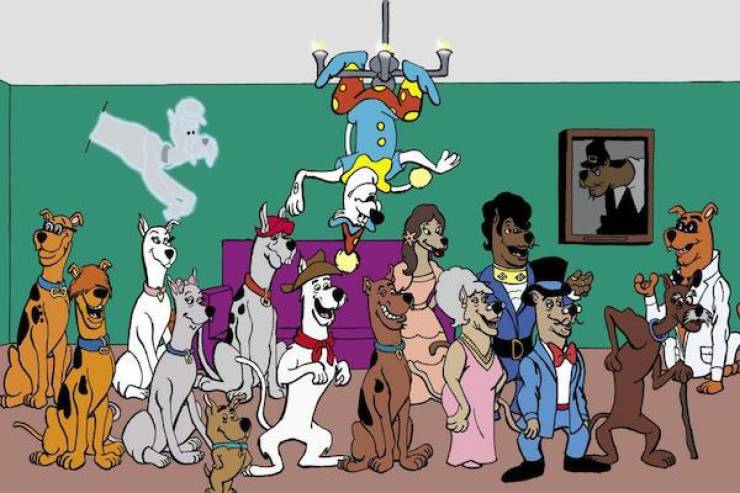 There’s a reason why Scooby and Astro sound the same

Both of the iconic dogs from Hanna-Barbara were voiced by tv legend Don Messick. He was the voice of Scooby from 1969 until his death in 1985. 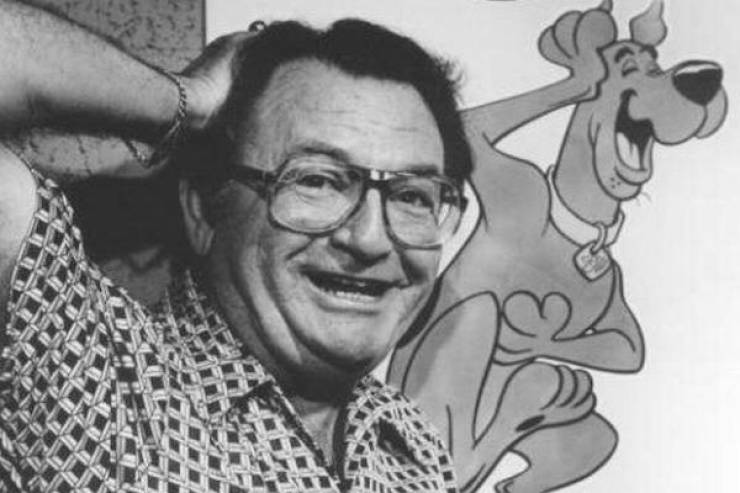 Doesn’t matter the incarnation or if it was live action or cartoon, only Shaggy and Scooby have been in every single episode, spin-off, reboot and movie.

There was a completely different cast for the first planned movie

As early as the 1990’s, there was a plan to make a movie with Jim Carey as Shaggy and Sara Gilbert as Velma. Kevin Smith was supposed to direct. Sadly, the plan fell apart.

A few years later, another pitch had Mike Myers and Janeane Garofalo lined up, but that fizzed out too.

The show has a famous scientist as a fan

I’m sure plenty of famous people are fans, but astronomer and cosmologist Carl Sagan loved the show, because it talked the paranormal and ghost hunting.

He said the skeptical nature of the show was perfect. It taught kids to question what they know and to look for rational proof. 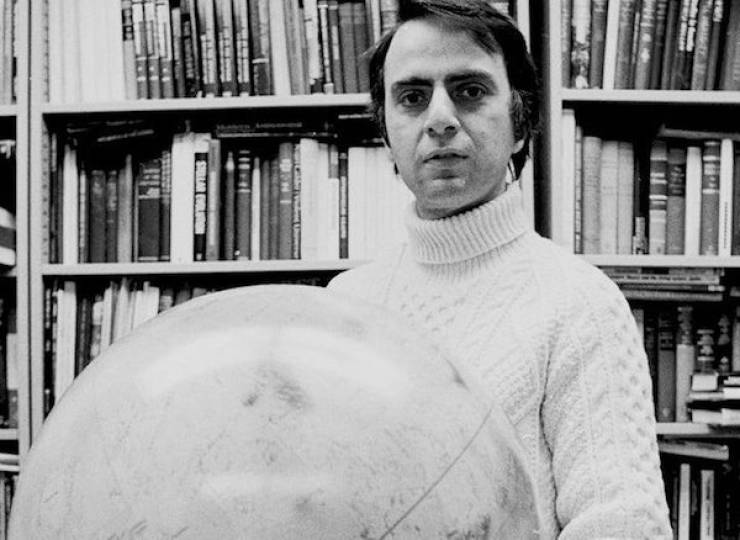 Scooby Doo is a record breaker

It’s had over 12 iterations, it’s constantly reinventing itself for the times and remains relevant today, despite not winning many awards over the years.

It’s still the longest running animated franchise of all time though. 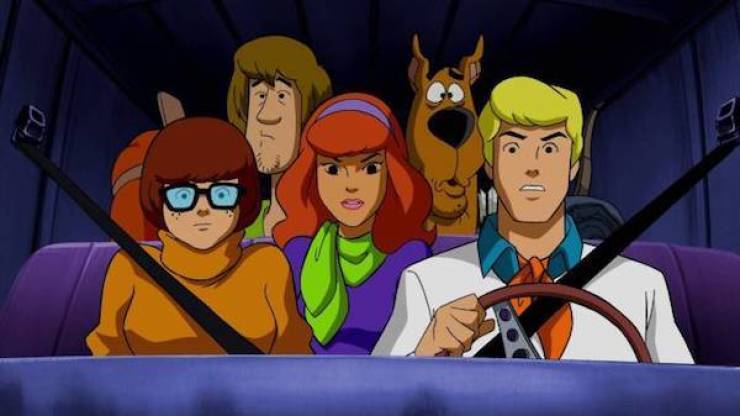