Do These People Go Too Far With Their Emotional Support Pets? (18 pics)

Daniel the Duck is a certified emotional support animal, who helps his owner Carla Fitzgerald battle the post traumatic stress disorder. “Everyone just took notice of him and fell in love,” Fitzgerald told ABC News. “I mean, he’s an adorable, funny and sweet little guy. He was very well behaved at the airport and during the flight.”

Pony On An Flight

Flirty The Mini Service Horse (a.k.a. Flirty) is a miniature horse who is a service animal. She is a very small miniature horse, standing only 27 inches tall and weighing just over 130 lbs, who loves attention and helping her disabled owner/handler, Abrea Hensley. Abrea is allergic to dogs and has post-traumatic stress disorder, so she takes Flirty everywhere she goes. The little mare reminds Hensley to take her medication and provides support when she becomes overwhelmed

'Emotional Support' Pig Kicked Off Flight For Being Disruptive

Woman has been kicked off her plane for bringing a 70-pound pig on board for 'emotional support'. She made it to the plane and was sitting with the pig on her lap, however, before long, the pig was reported as being 'out of control' and disruptive. So the passenger was asked to get off.

Emotional Support Peacock, Trying To Board A Flight From Newark To L.a

This woman brought along her emotional support peacock for her flight to L.A. from Newark Airport. It didn’t go well. Despite being warned three times that Dexter the peacock would not be allowed to travel with her, conceptual artist Ventiko showed up at the airport anyway. Dexter was promptly turned away by United Airlines

Easter the turkey was Jodie Smalley's support animal. Smalley found it 'as a shivering chick standing in the road on Easter Day', hence the name. “Easter came to me as a tiny poult at an emotionally difficult time in my life being in a mentally abusive and failing marriage,” Smalley explained

Woman Removed From Flight To Cleveland With Emotional Support Squirrel: 'You Will Not Take My Baby'

A passenger was removed from a Frontier Airlines flight when she attempted to fly with her “emotional support” squirrel and then refused to get off the plane when she was told no, according to the airline. A Frontier spokesman said in a statement that the passenger had alerted the airline that she would be bringing an emotional-support animal on the flight but did not mention it would be a rodent. “Rodents, including squirrels, are not allowed on Frontier flights,” the statement read. “ 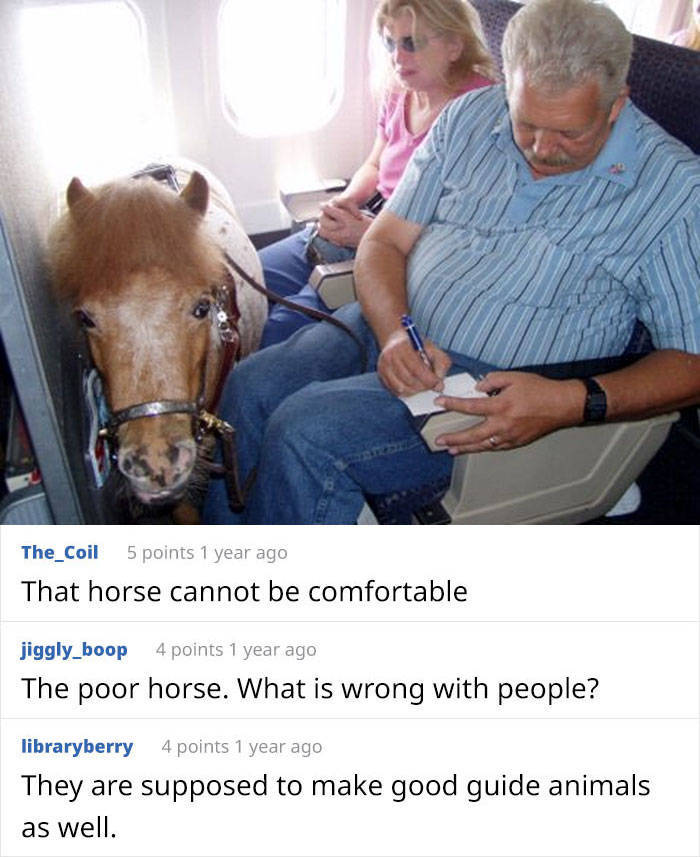 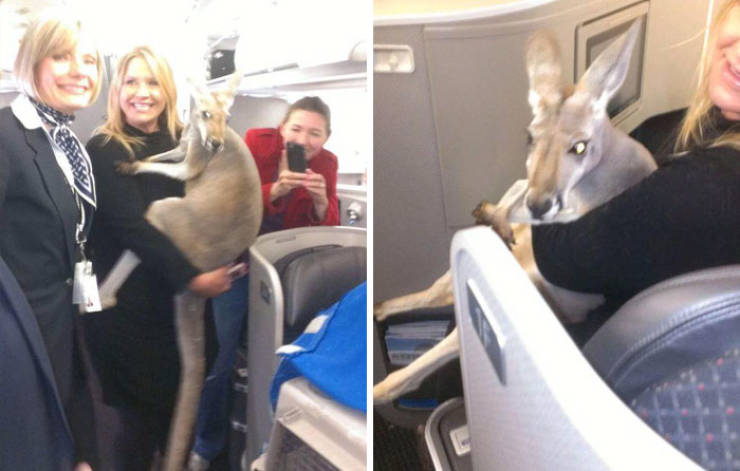 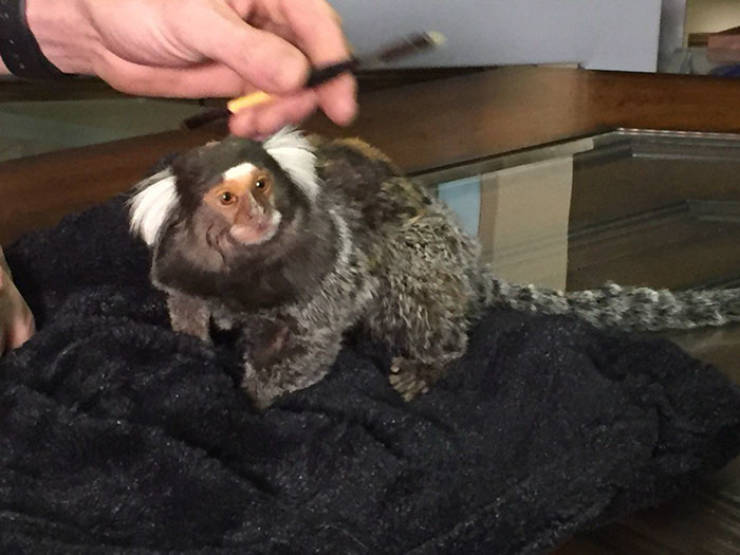 Marmoset Gizmo got through TSA screening and boarded a Frontier Airlines flight from Columbus, Ohio to Las Vegas. Gizmo's owner, Jason Ellis, didn't warn other passengers or crew about his emotional support pet, so their surprise when Gizmo started poking its head out of Ellis's shirt was understandable. Gizmo was never loose on flight and stuck to owner's shirt the entire time. 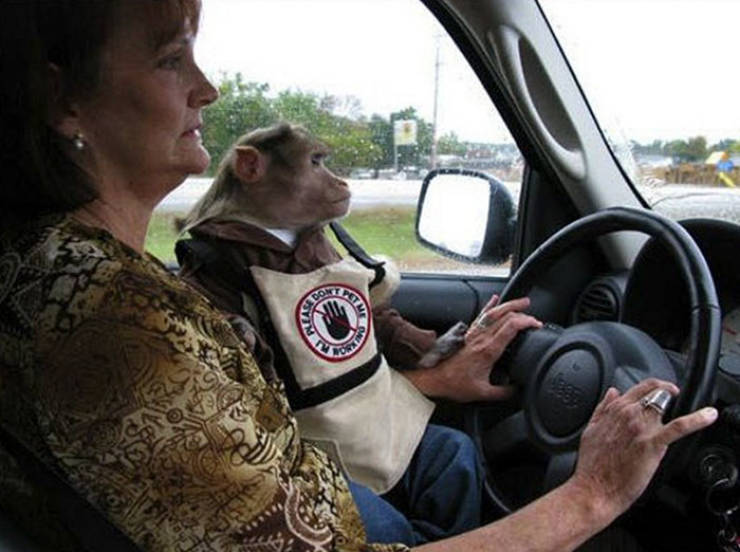 Richard, a bonnet macaque monkey, belongs to Debby Rose, who suffers from agoraphobia, the fear of places and situations that causes panic, helplessness, or embarrassment. She brings her monkey everywhere and will even drive with him in the front seat.

This emotional support turkey was spotted at San Francisco Airport.

The turkey was seen going through security sometime last week by KTVU journalist Frank Somerville, who shared the story to his Facebook page.

According to the post, the turkey is an emotional support animal for a woman who lost her husband. The woman takes the turkey everywhere with her, and it even sleeps with her at night. 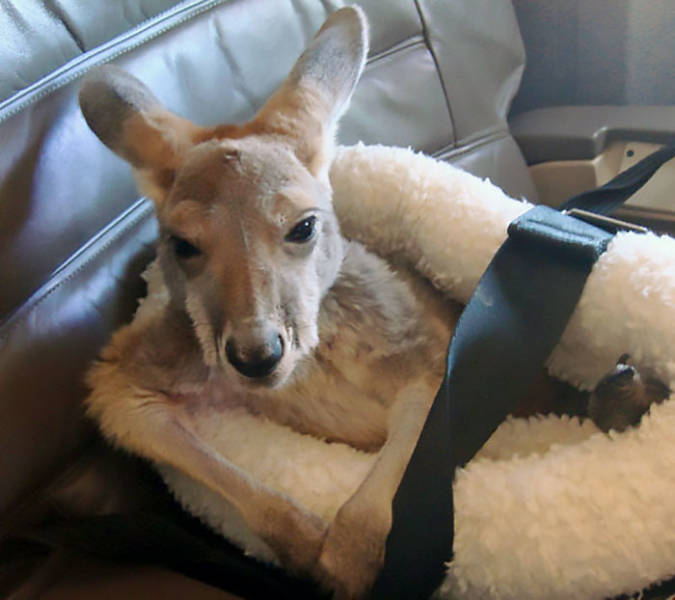 "A customer tried to bring a baby kangaroo on the plane as a service animal," a retired airline customer service agent with 18 years of experience told Business Insider.

We've Got Cock!! Emotional Support Rooster For. The. Win 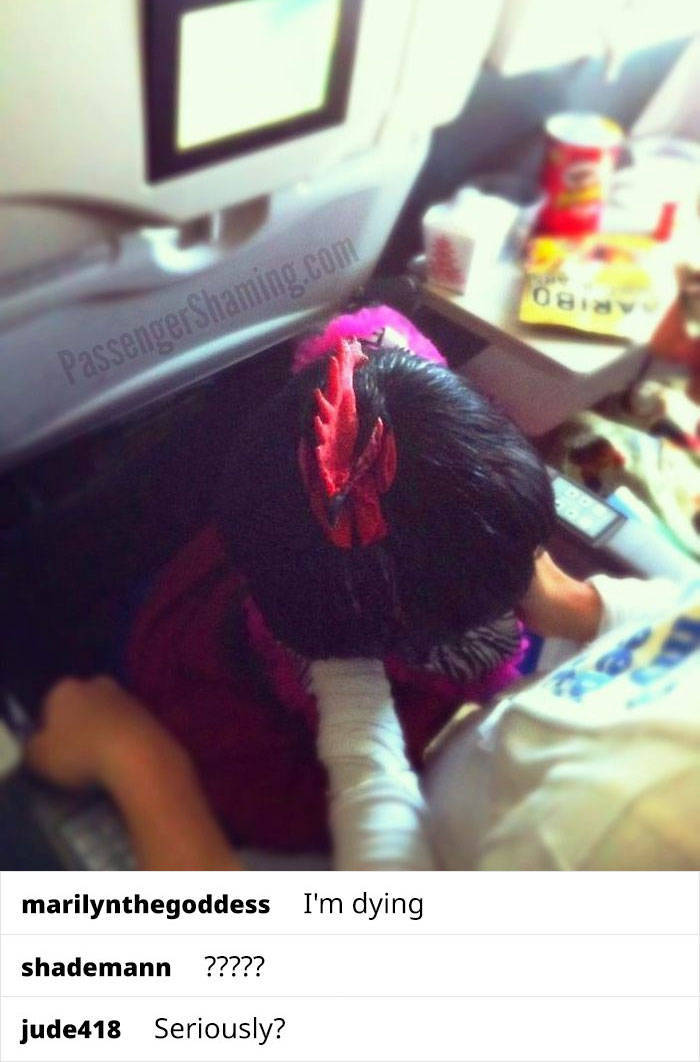 The Traveler Assured Us There Was No “Fowl” Play Afoot And That This Was Simply Her Service Duck. Our Officers At Charleston (Chs) Were Overheard Saying That This Duck Was Pretty Chill. Not Lame At All… 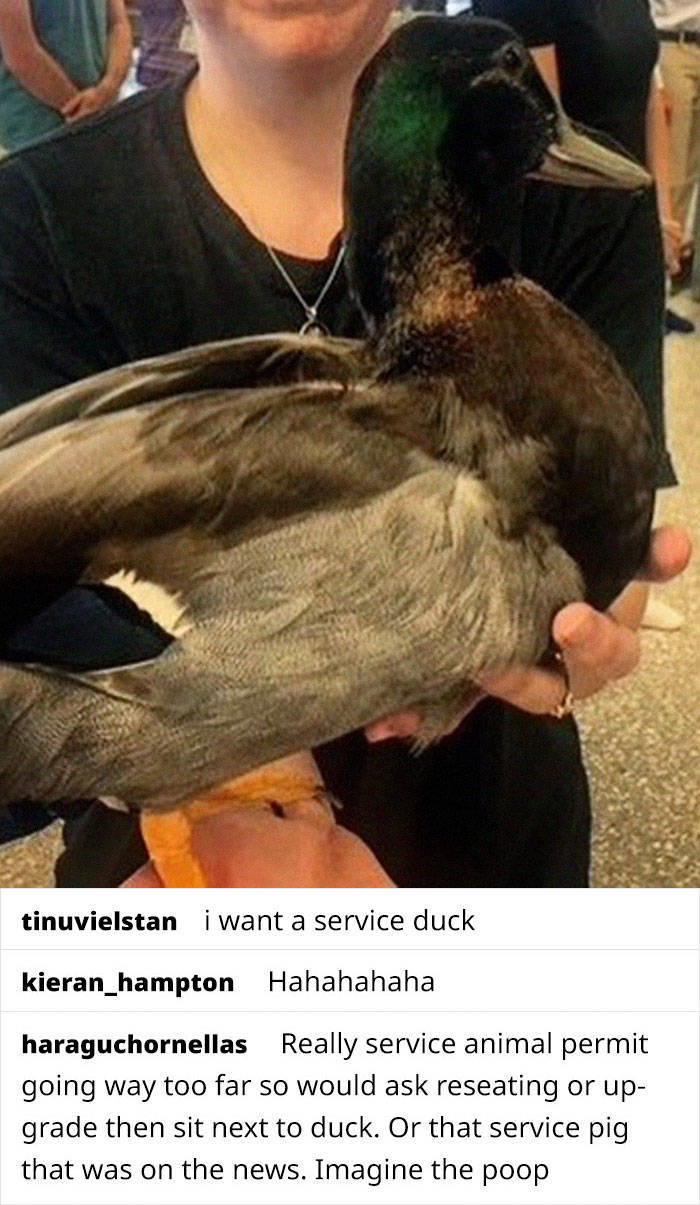 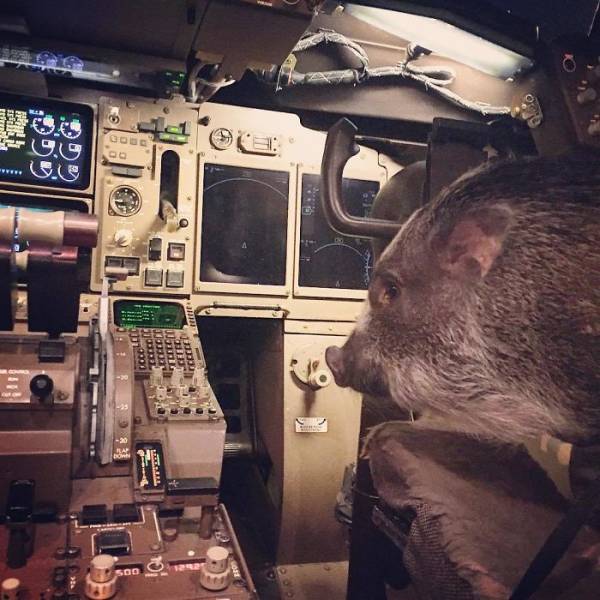 Hamlet the Beach Hog is the emotional support animal of Megan Peabody who loves flying, but suffers from anxiety. According to Peabody, having her hog on board makes her feel "more comfortable and provides a lovely distraction." 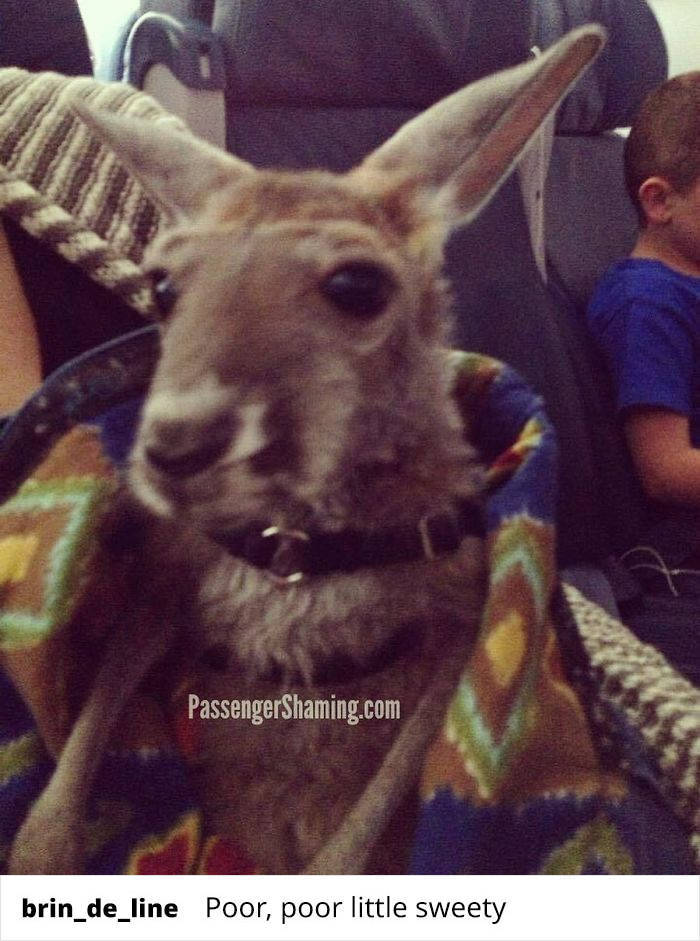 Belen Aldecosea said she contacted Spirit airlines twice to confirm that her emotional support hamster can fly with her. But the animal was refused entry upon arrival, and an employee suggested she flush her pet down the toilet

Skier 8 month s ago
I am allergic to animals and I can say it distresses me when people bring such animals on a plane. A service animal I can deal with, but claiming needing a pet for emotional support on a plane is ridiculous. I recall a story of an emotional support dog biting another passengers face. It is getting ridiculous as I am starting to see people bring their pets into the grocery store now.
Reply
2

Concern 8 month s ago
Attention wh*res. Lived next door in an indoor condo to an out of control therapy pig that squealed bloody murder day and night. Dumba$$ owner never put it on a leash, it didn’t obey him, and it attacked dogs. He spent all day in a downstairs bar next to the door to the condo building and he left the pig loose outside all day. I had to pass by with my dog daily. Every time I would have to run or pick up my dog for the safety of the pig, who would chase us. I told him repeatedly that my dog, a bull terrier, WILL attack his pig if he keeps letting it chase us. Of course it finally happened. My dog did exactly what I warned him about, and I was made the bad guy for having a “viscous” dog, even though she was always leashed and obeying the rules. Such bullsh*t.

Real service animals go through rigorous training. An emotional support animal requires none and can be completely unfit to be around people and other animals. These people are taking advantage and they will cause bans on emotional support animals. They will create laws requiring expensive training because of these idiots and those who actually need them might be denied.
Reply