Even Great Movies Can Have Bloopers In Them (15 pics)

Newborn “actors” often cause a lot of trouble, so instead of using them, dummies are often implemented. Most directors use animated dummies that can move their limbs but the creators of American Sniper decided to use a regular doll. In the scene where Bradley Cooper’s character takes his newborn daughter, the actor had to make the doll look alive by moving it with his own fingers. It is very noticeable but the scene couldn’t be reshot. In the end, the scene with the baby caused a lot of jokes on the Internet. 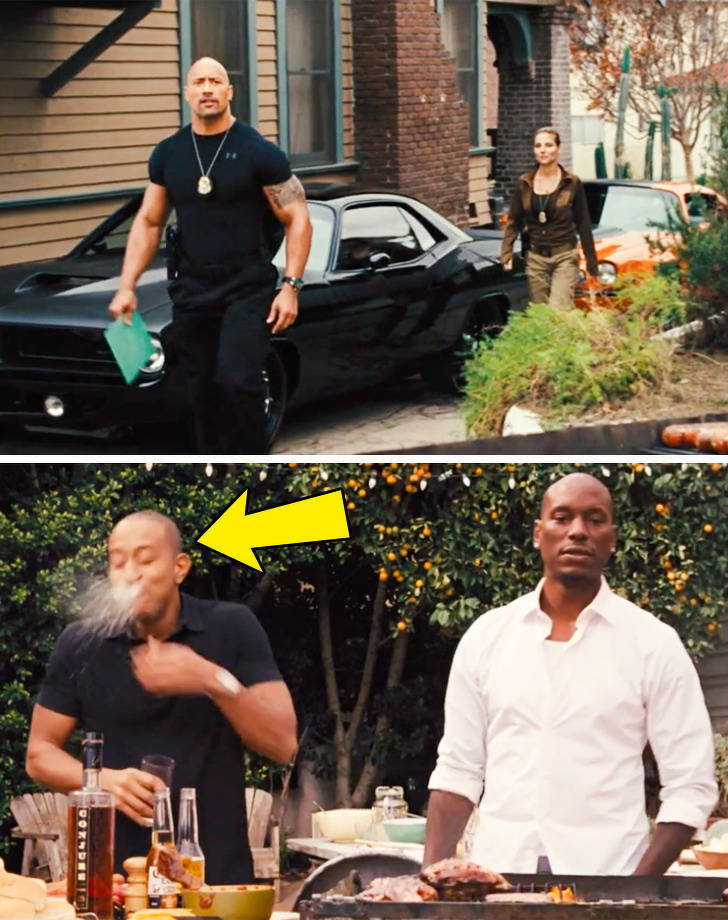 When Hobbs appears at the barbecue in the film, Roman says, “Hey, Mia, better hide your baby oil.” And Dwayne Johnson’s character says, “You’d better hide that big forehead.” Nobody expected that line from him and actor Chris Bridges literally burst out laughing spilling his drink and Tyrese Gibson didn’t even know what to do. It all looked so funny that the scene was left in the film.

Guardians of the Galaxy
3 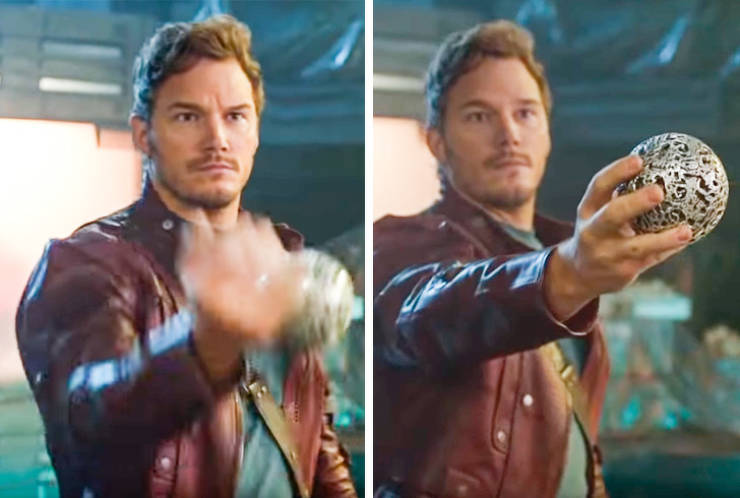 Chris Pratt actually dropped the sphere with the Infinity Stone accidentally but continued to act in the scene. The creators of the film thought that the scene looked very natural as if it had been planned, and it was all done in the Star Lord’s character. 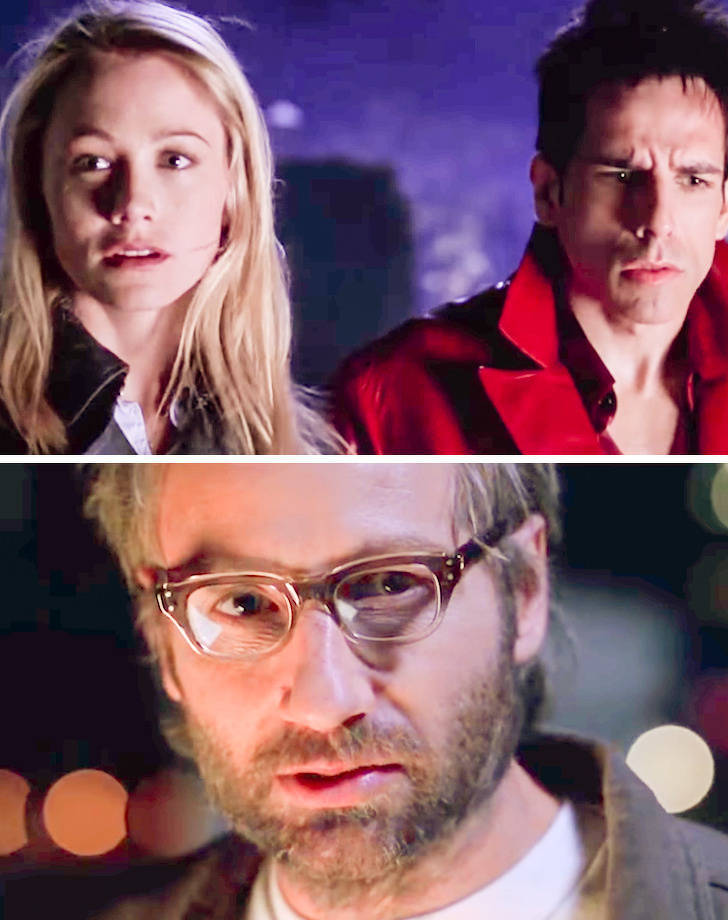 In the cemetery scene, where David Duchovny’s character talks about how the fashion industry was behind all the big political murders of the past 100 years, Ben Stiller’s character asks, “Why men-models?” Duchovny explains but Zoolander asks again, “But why men-models?” It turned out that Ben Stiller just forgot his next line and just repeated the previous one. Duchovny decided to improvise and said, “Are you joking? I’ve just explained it.” The funny scene was kept in the film.

The Amazing Spider-Man 2: Rise of Electro
5 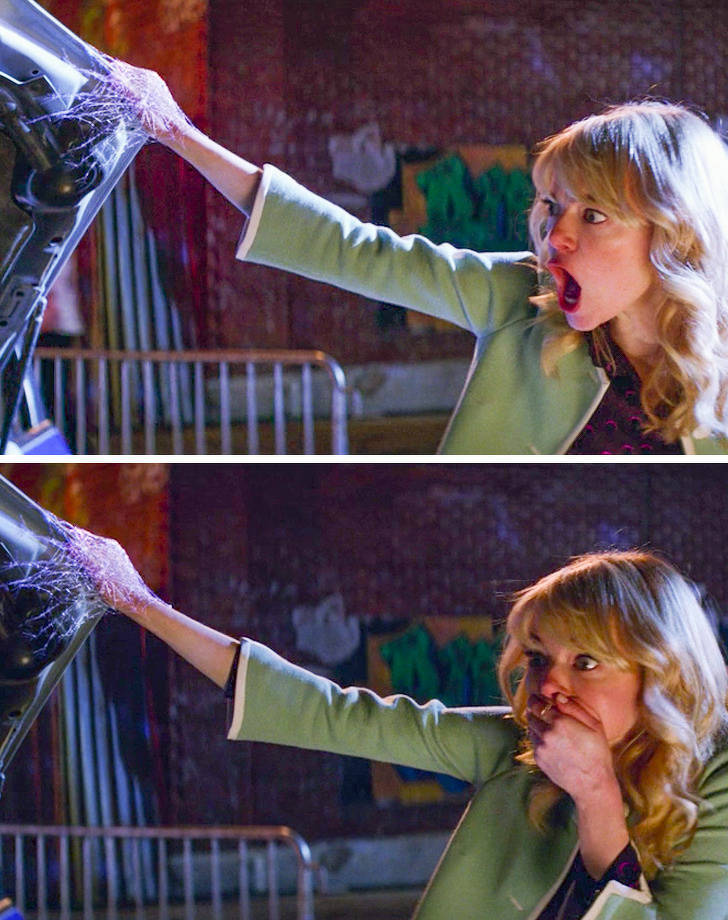 When Spider-Man leaves after “tying” Gwen to the car, she calls him by his name in public, revealing his identity. It wasn’t in the script and actress Emma Stone just made a mistake and automatically closed her mouth with her hand. 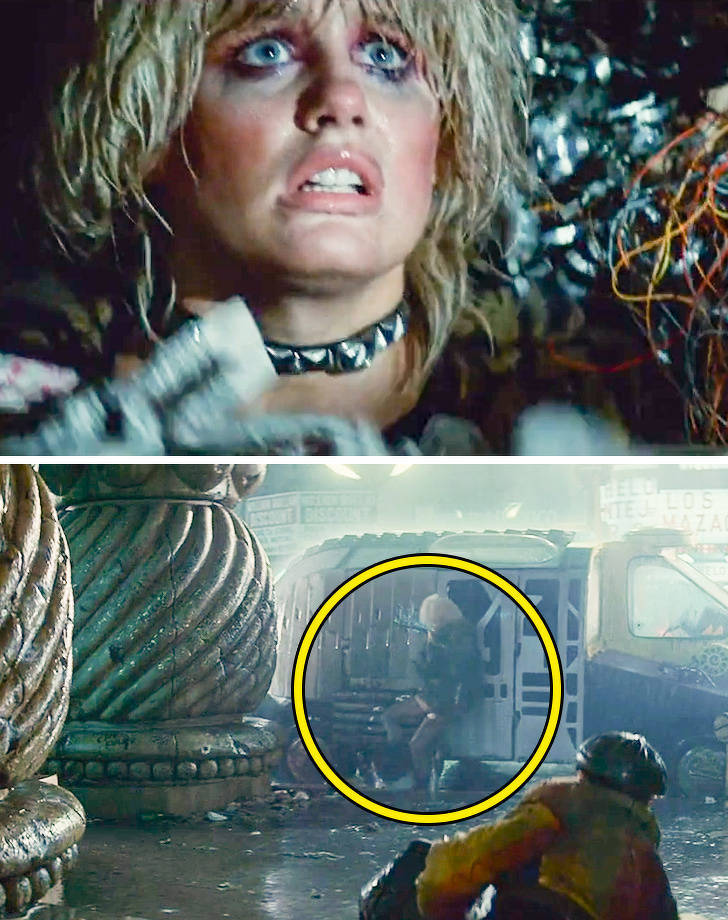 The scene where Daryl Hannah’s character runs away in a panic, slips, and breaks the window of the van with her elbow may have looked planned but it was an accident. The actress slipped by mistake and was later taken to the hospital with a broken elbow.

The Lord of the Rings: The Two Towers
7 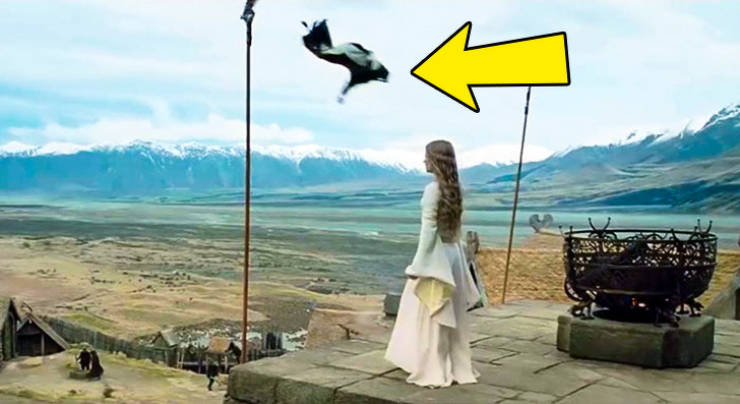 In the scene where Éowyn looks far away, you can see the flag fall off the post and fly away. The incident wasn’t planned but it was so metaphoric and looked so fitting, it was decided to leave it be. 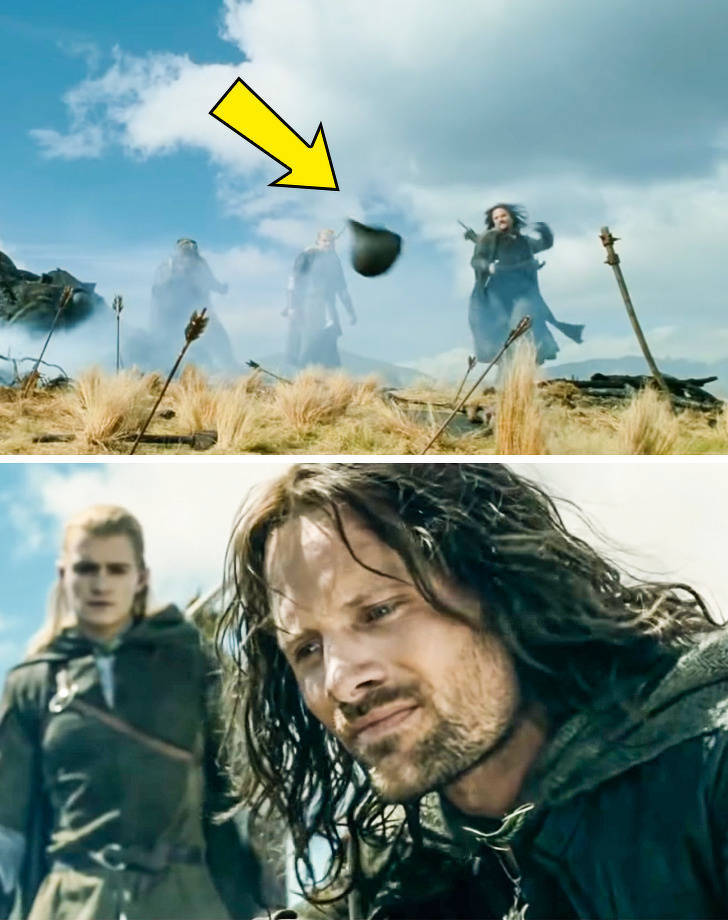 While shooting the fire scene, Viggo Mortensen was supposed to kick a heavy ork helmet. The actor kicked it so hard that he broke his toes and screamed in pain. The episode was so real and director Peter Jackson was so impressed with the fact that Viggo continued to act despite the serious injury that he had, that he decided to keep this scene in the film. 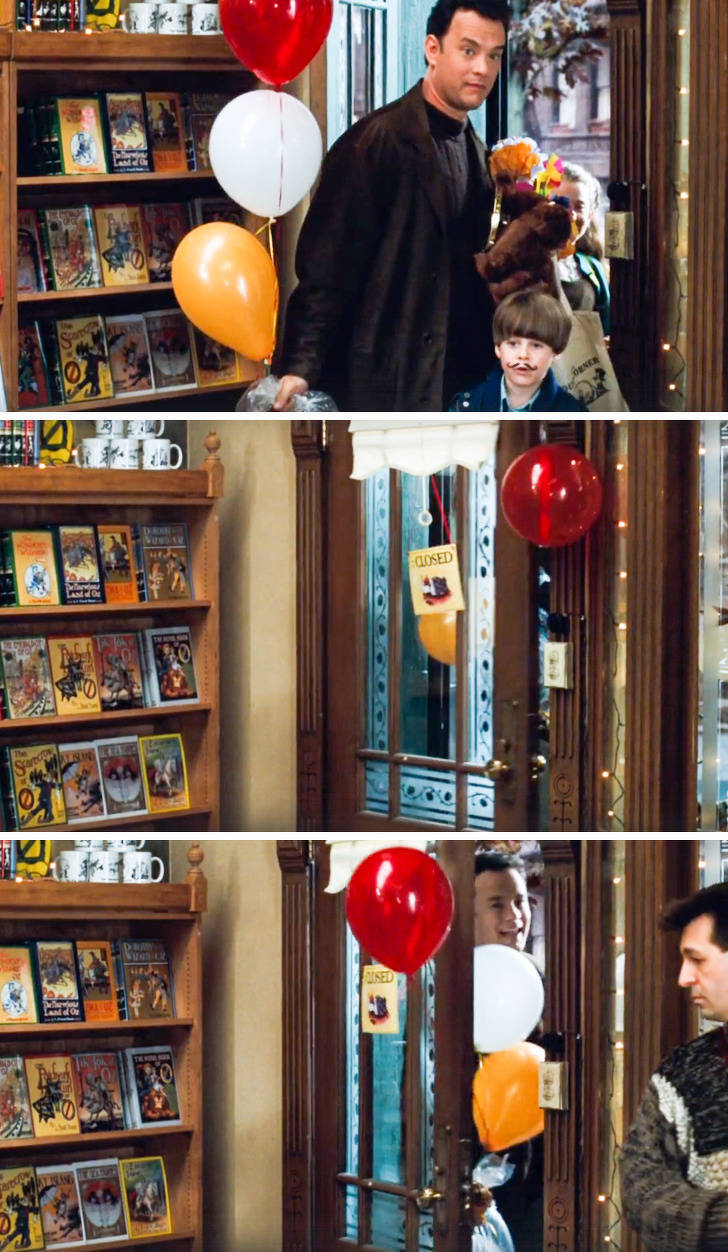 When Joe leaves the bookstore holding balloons in his hands and a goldfish in a bag, one of the balloons gets stuck in the doors. This wasn’t planned and Tom Hanks says, “It’s great it wasn’t the fish!” Even though it wasn’t planned, the scene was really funny and it was left in the film. 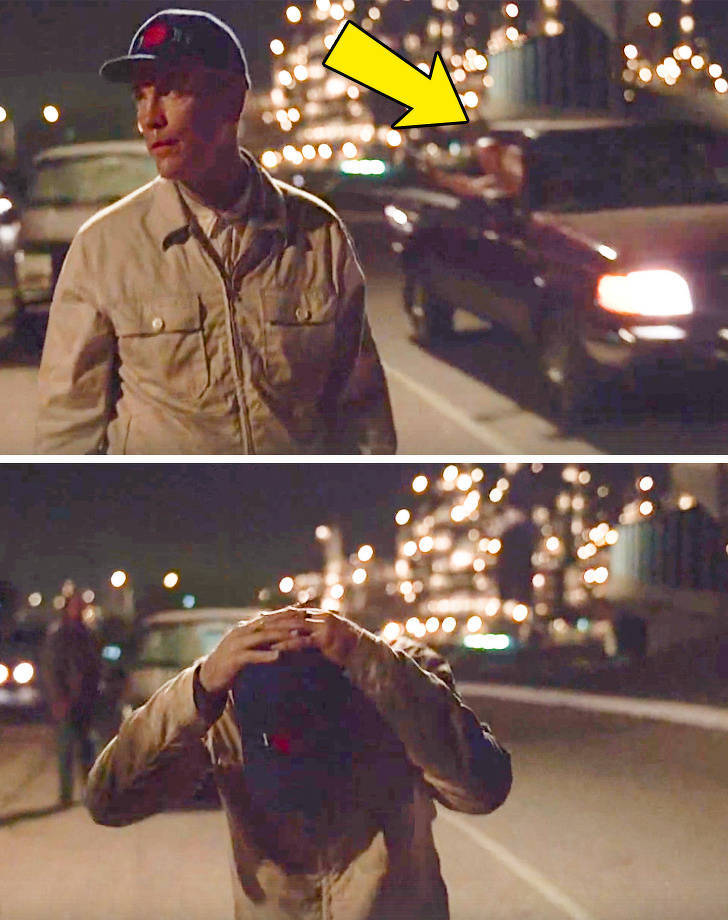 The scene where a guy from a passing car throws a beer can at the head of the main character wasn’t scripted. One of the extras drank and made a mistake, so John Malkovich’s reaction was very natural. Director Spike Jonze liked the scene so much that he kept it in the final cut of the film. 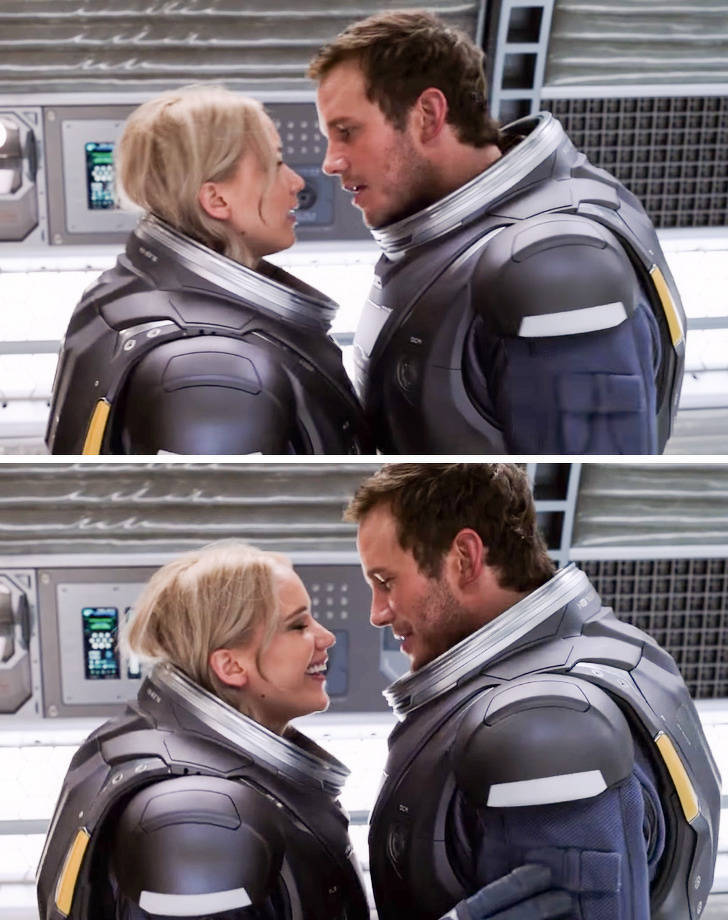 When the main characters were supposed to kiss after walking in space, Jennifer Lawrence and Chris Pratt bumped into each other with their spacesuits and burst out laughing which made the moment as non-romantic as possible. 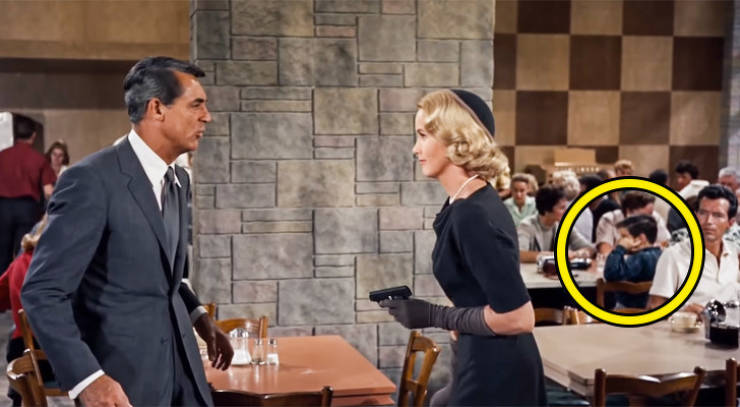 In the scene where Eve Kendall shoots at Thornhill in the cafe, you can see the boy in the back closing his ears with his fingers before the shot happens. The blooper was probably missed during editing and you can see the scene in the finished film.

Raiders of the Lost Ark
13 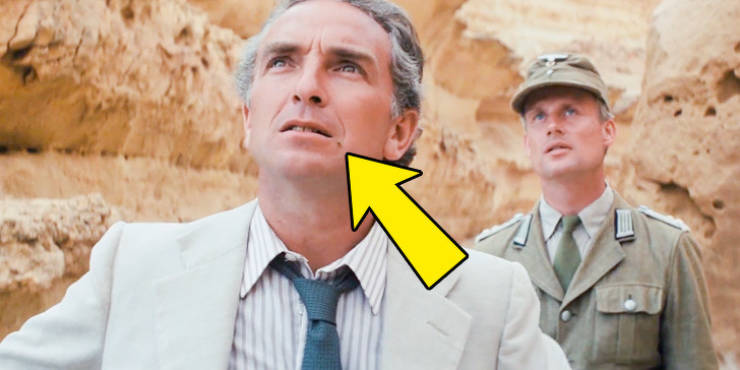 In the scene where Indy threatens to explode the Ark, you can see that a fly gets into Belloq’s mouth. A second later, it gets out, so the scene was left alone. However, viewers didn’t see this, so many people assumed that the actor just swallowed the fly. 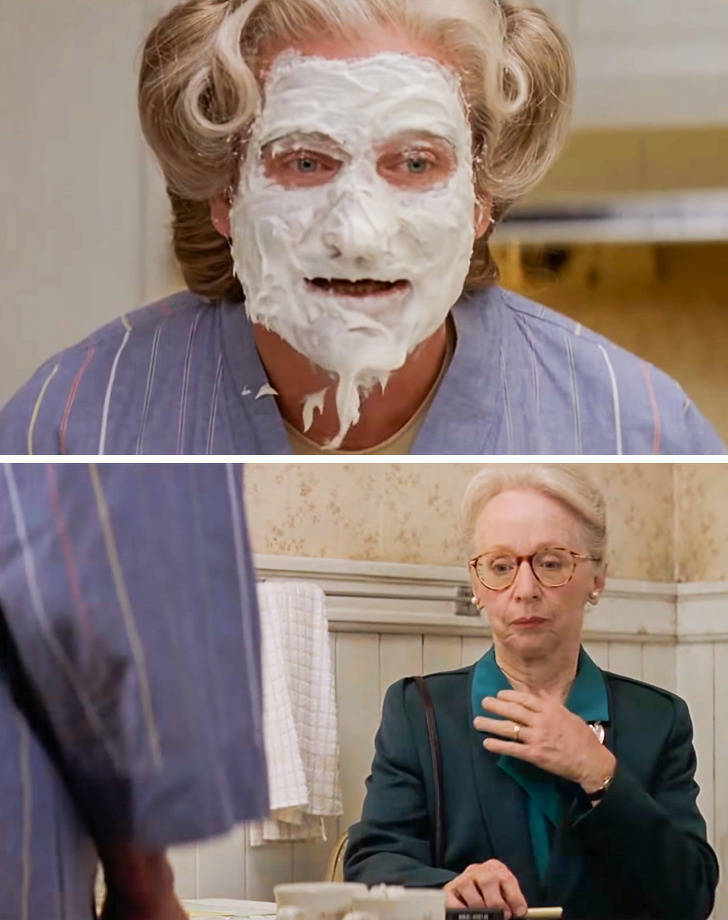 Just after the moment when Robin Williams’ character falls into a cake with his face, the cream from his chin falls into a cup. It wasn’t in the original script but the actor quickly found an elegant way out of the situation and said, “Oh there you go, you got your cream and your sugar now,” so the moment was left in the film.

Back to the Future Part III
15 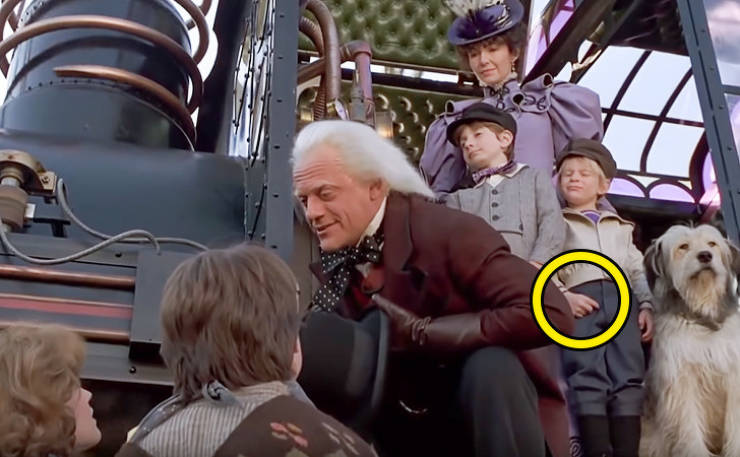 In the final scene of the film, you can see Doc’s youngest son showing a rude gesture that many people thought was too much. But most likely, the young actor was just trying to let the director and other members of the crew know that he needed to go to the bathroom. During editing, it was probably just overlooked but attentive viewers still managed to catch it.