Some Movie Details Need To Be Explained (24 pics) 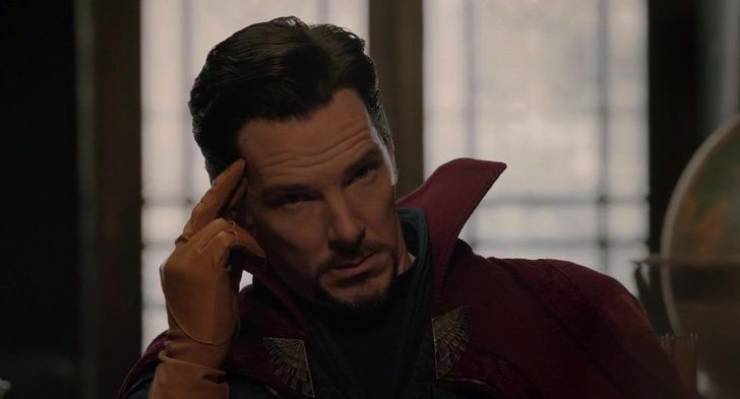 Thor: Ragnarok is the only Marvel film where Doctor Strange appears wearing his classic suit with yellow gloves. This is a reference to the original comics. 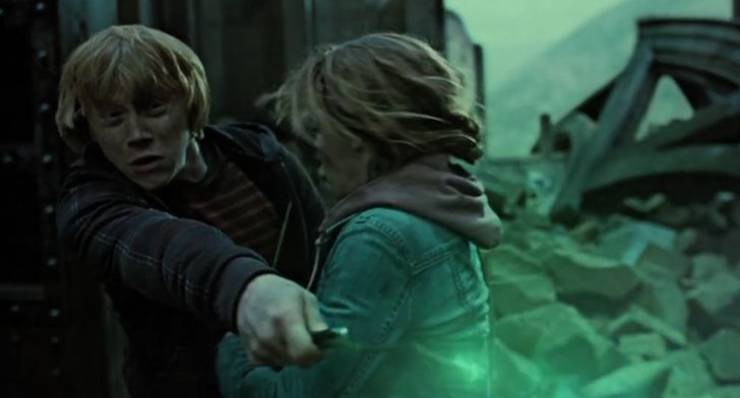 In Harry Potter and the Deathly Hallows: Part II, Ron uses a spell with a green glow — this is the visualization of the unforgivable curse, Avada Kedavra. None of the main characters had used it in the films before. But when faced with death, Ron probably decided that it was the only way him and Hermione would survive. 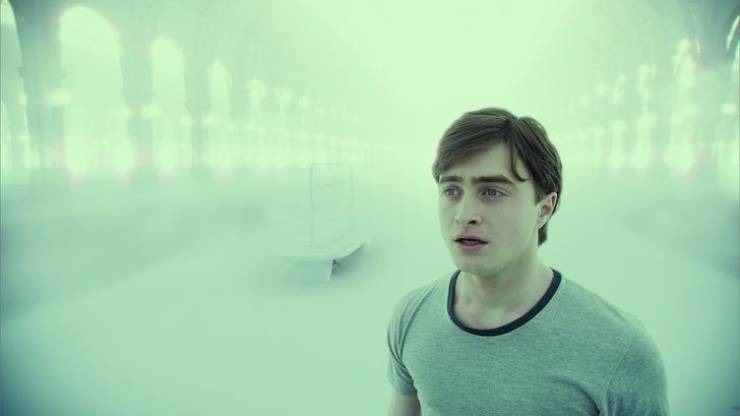 In the same film, we also see Harry Potter without his scar or glasses. It’s all because the scene is not set in the real world and we see the soul of the main character. His bad vision and his scar are not present in this state.
In the book, Harry was actually naked but then, because of embarrassment, clothes suddenly appeared. 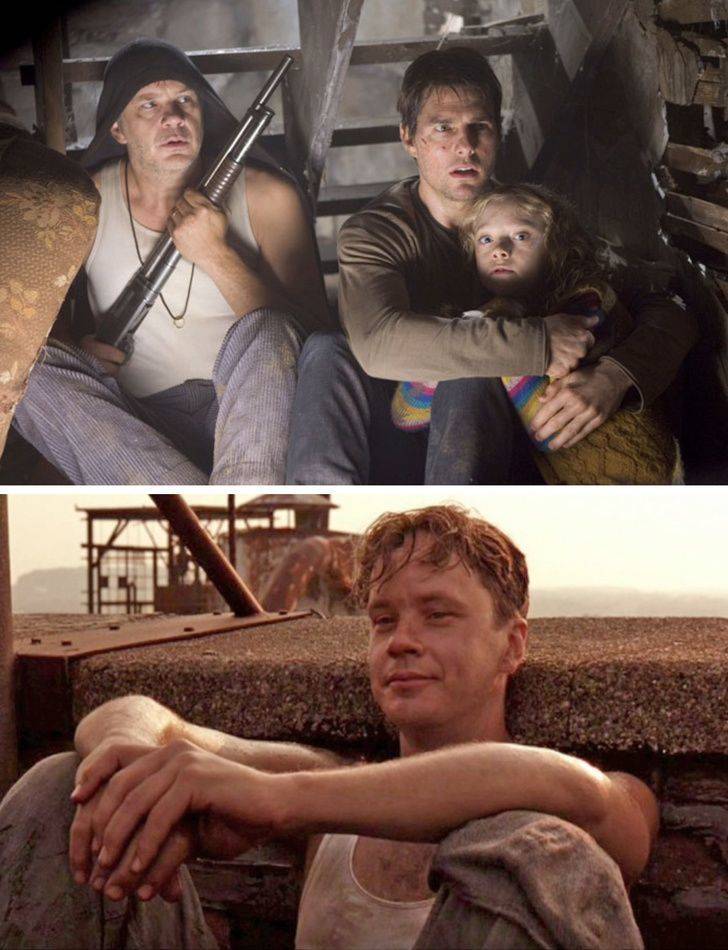 In War of the Worlds, Tim Robbins’ character suggests Ray dig an underground tunnel. This was how Andy Dufresne escaped from prison in the iconic film, The Shawshank Redemption. Andy was also portrayed by Robbins. 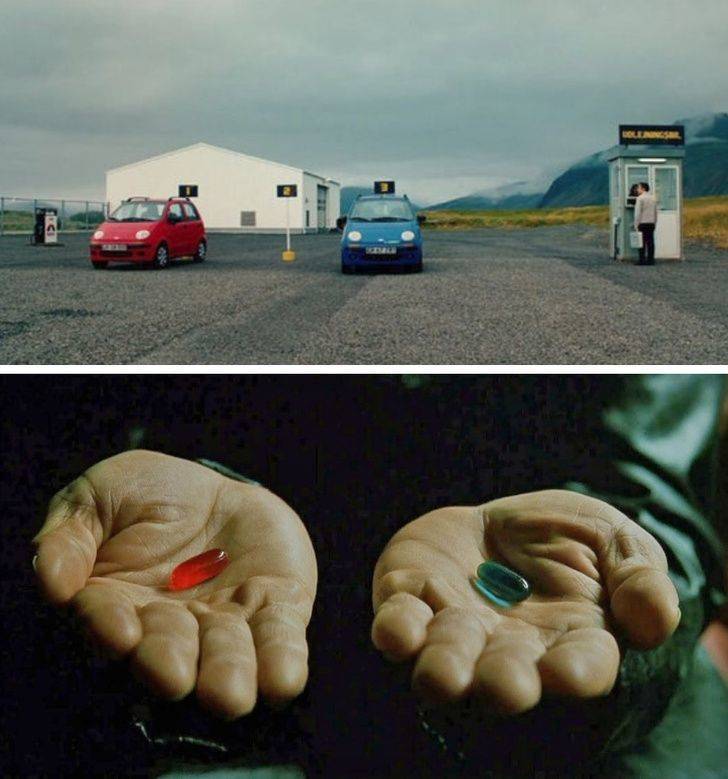 In The Secret Life of Walter Mitty, the main character is presented with a choice when he arrives in Greenland: should he pick the red or blue car? Does this ring a bell? 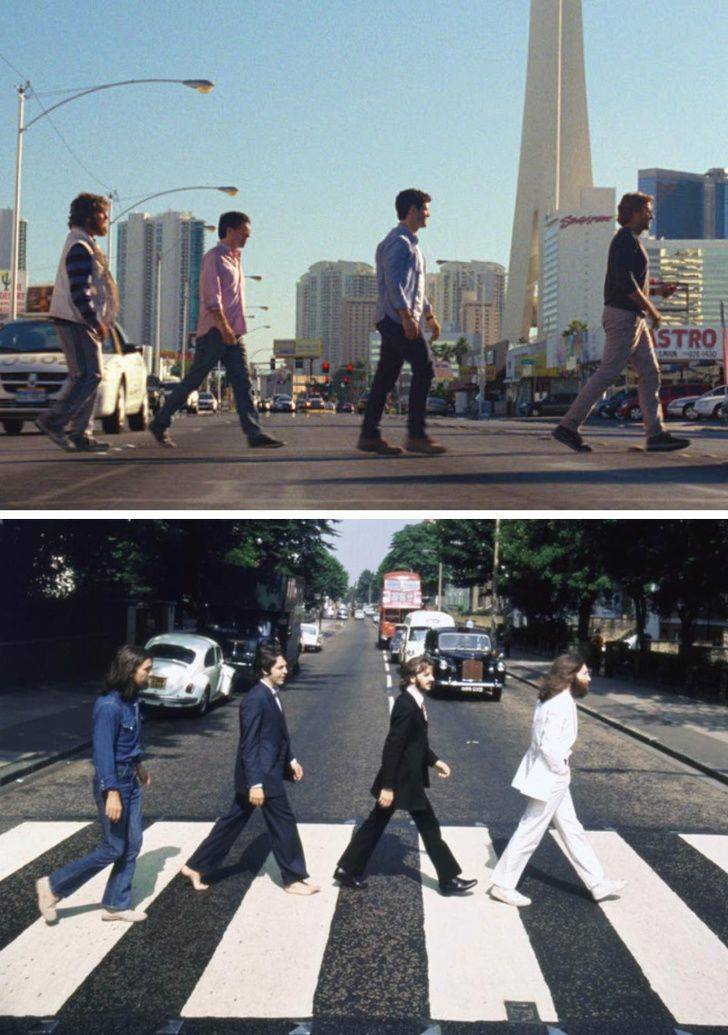 One of the scenes in The Hangover is very similar to the cover of an iconic Beatles album. 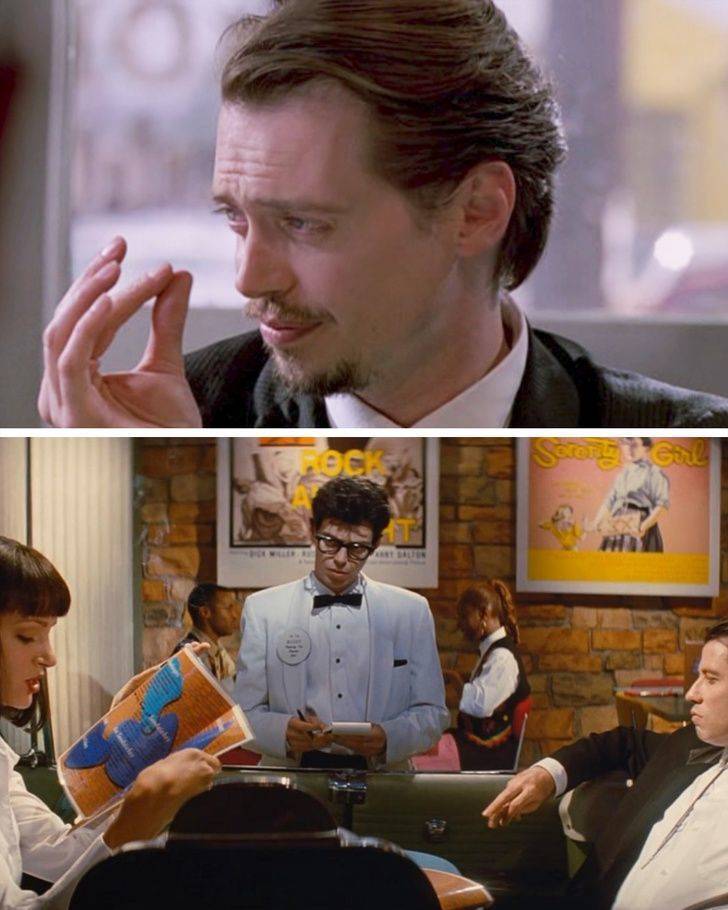 In Reservoir Dogs, Steve Buscemi’s character has a rule about not giving tips to waiters. It’s ironic that he played the role of a waiter in Pulp Fiction that Mia Wallace and Vincent Vega ran away from. 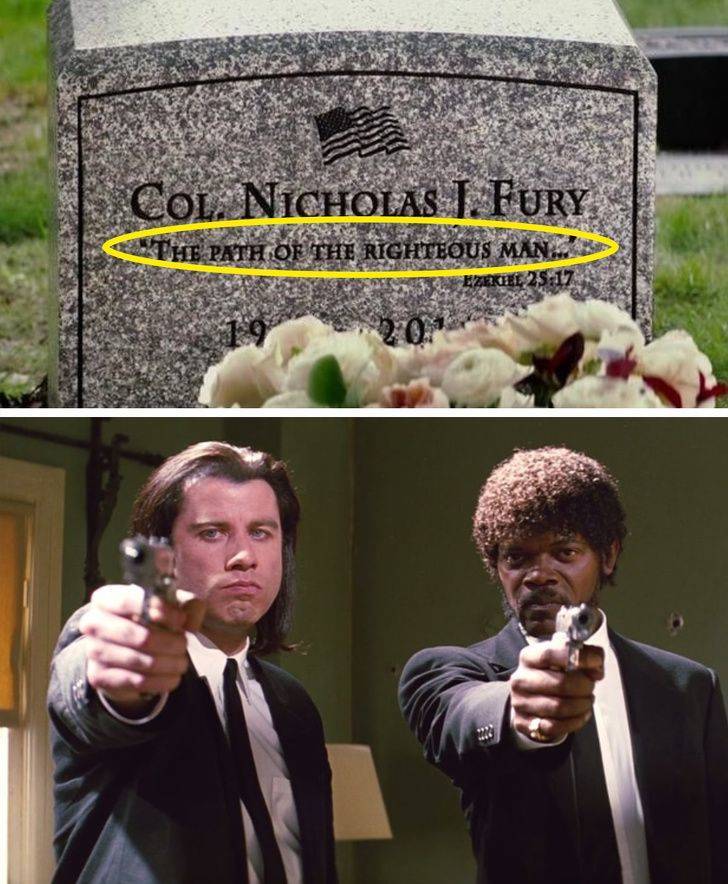 In Captain America, Nick Fury’s gravestone has an engraving that reads, “The path of the righteous man”. This is the exact verse Jules from Pulp Fiction quotes. Both roles were played by Samuel L. Jackson. 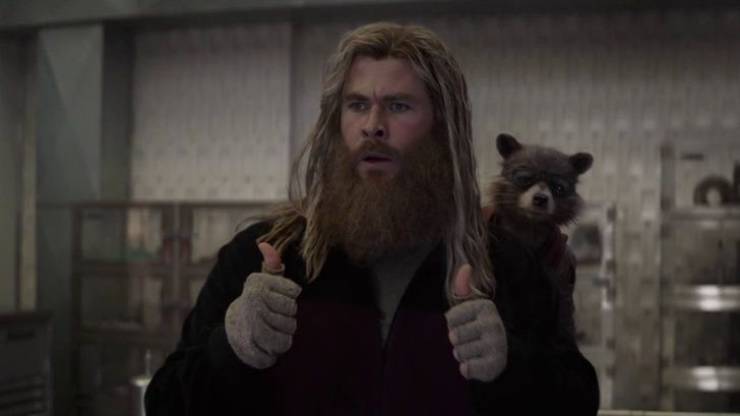 In all the scenes in Avengers: Endgame, Thor wears gloves. He does this in order to hide the stitches from the costume Chris Hemsworth had to wear to make his character look fat. 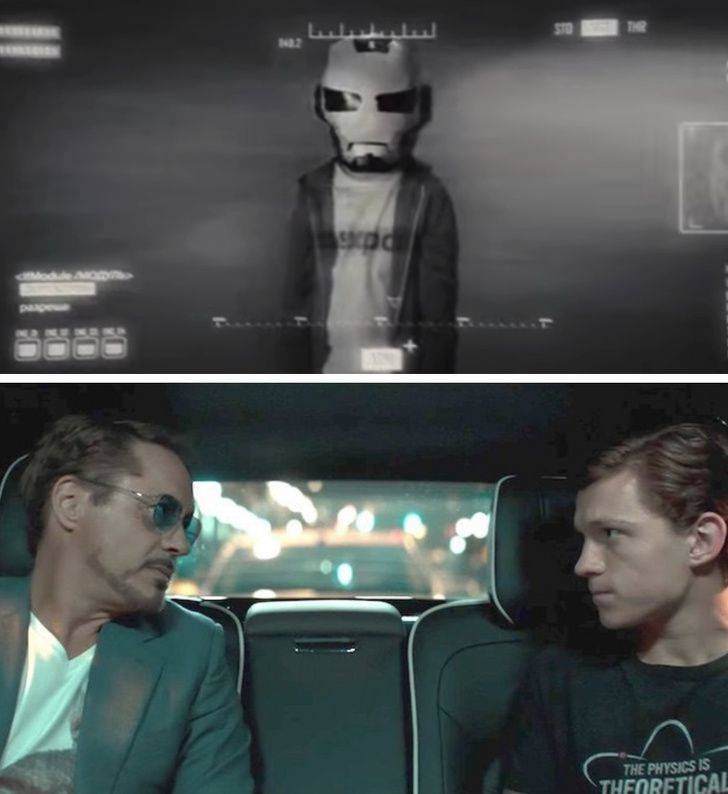 The boy wearing the Iron Man mask that is saved by Tony Stark later becomes Spider-Man. Tom Holland who played Spider-Man confirmed it. 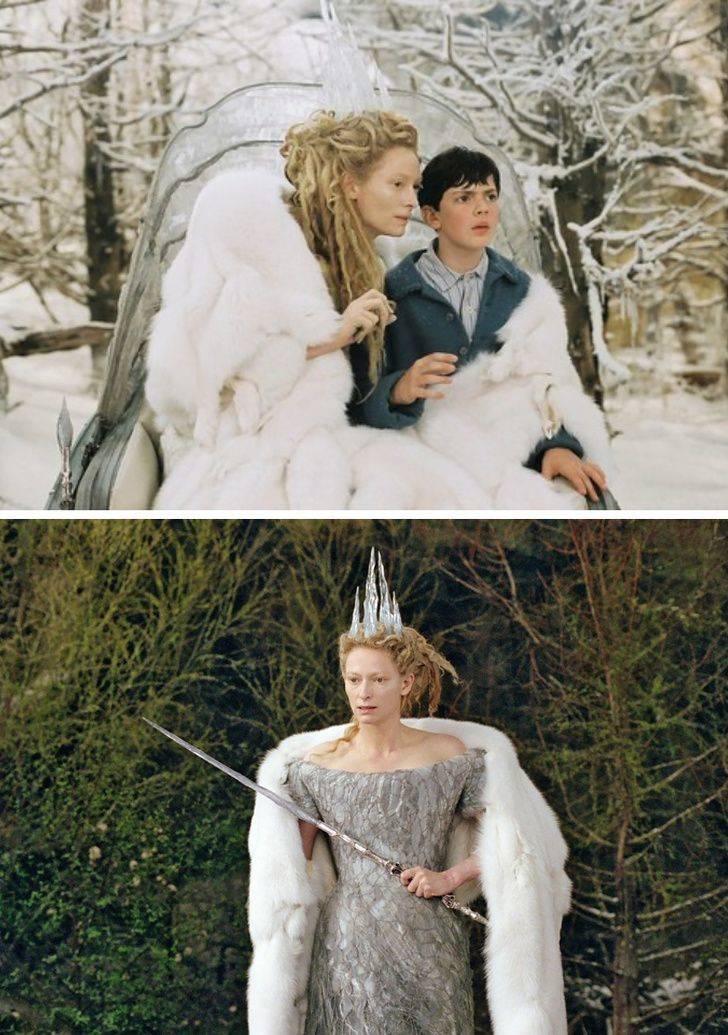 The ice crown of the White Witch from The Chronicles of Narnia: The Lion, the Witch and the Wardrobe melts and decreases in size when she starts to lose her power. 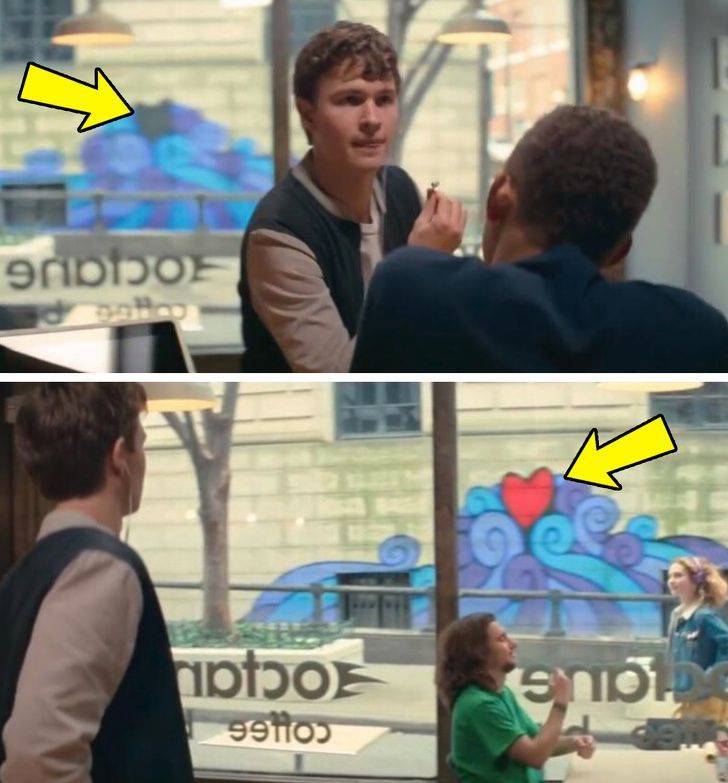 In Baby Driver, the scene that portrays the character falling in love is done in a very beautiful fashion. Pay attention to the changes in the graffiti colors after the main character meets Deborah. 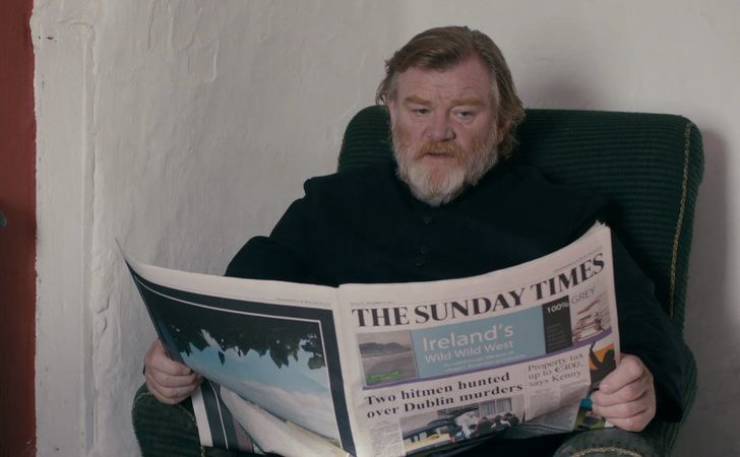 “Two hitmen hunted over Dublin murders” — this is what the headline of the newspaper Brendan Gleeson’s character is reading in Calvary. This is a reference to In Brugge where the actor also played the main role. 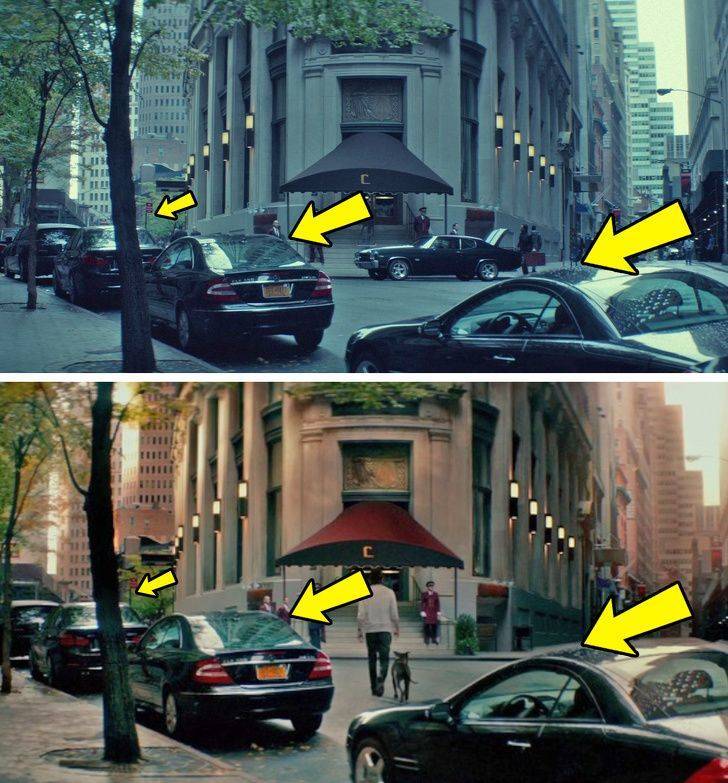 In John Wick: Chapter 2, the cars near the hotel are in the exact same places as they were in the first film even though the shooting was done 3 years apart. The authors were this specific because the events of the 2 films take place within 1 week. 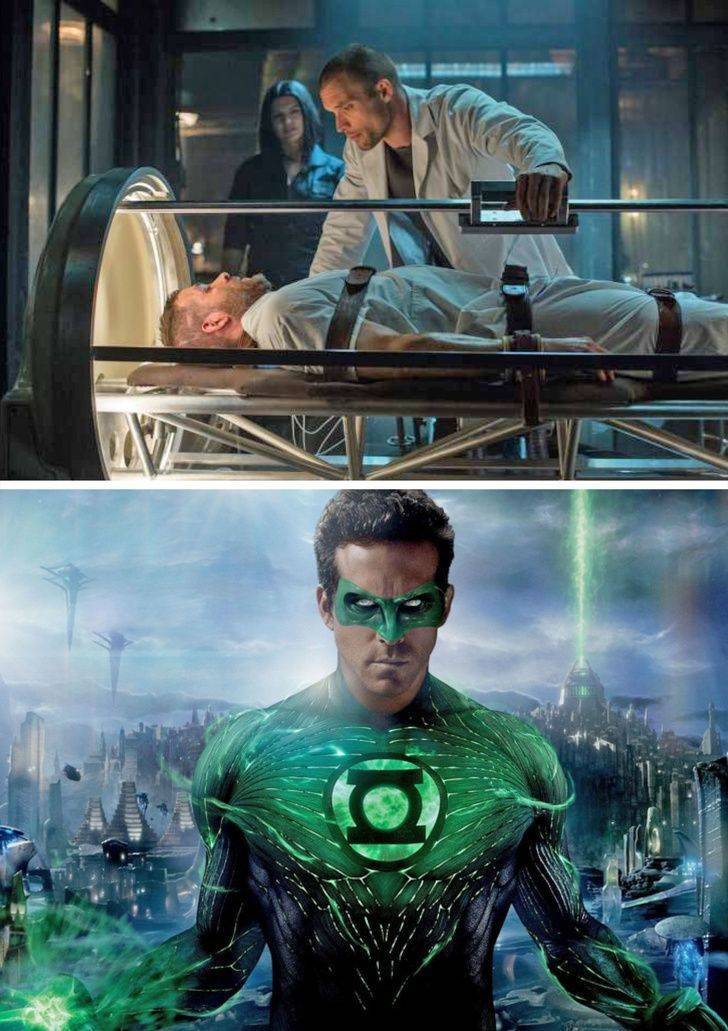 In his jokes, Deadpool often breaks the fourth wall and almost mocks Ryan Reynolds who plays the role. So, when his character was taken into experimental surgery, he asked, “Please, don’t make my suit green.” This was in reference to Reynolds’ role in Green Lantern. 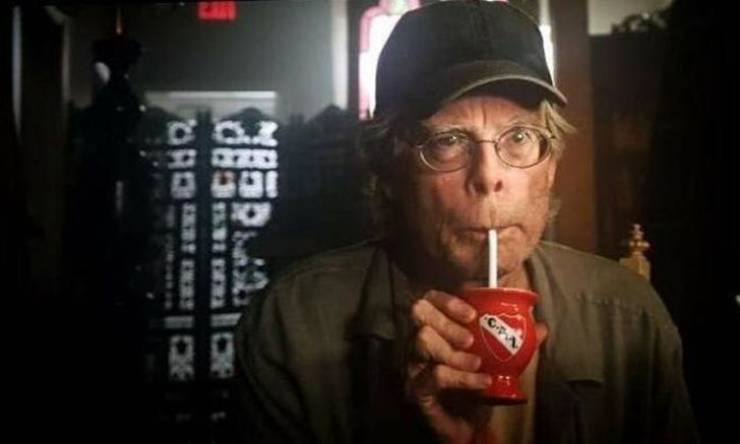 In the sequel to It, we see Stephen King’s cameo where he portrays a charismatic antique shop owner that sells Bill his old bike. Stephen King also criticizes Bill for the bad ending of his book — this is the same thing that King had been criticized for over the course of his entire career. 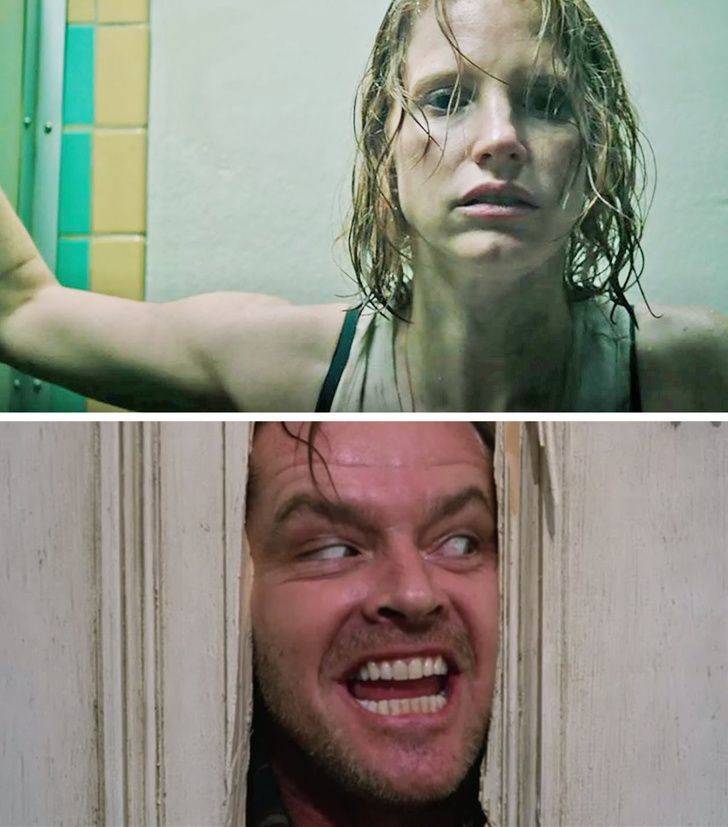 In It: Chapter Two, there’s a reference to the iconic film, The Shining. The moment when Beverly is in the bathroom and different people are trying to get in, one of them says the famous phrase, “Here’s Johnny!” 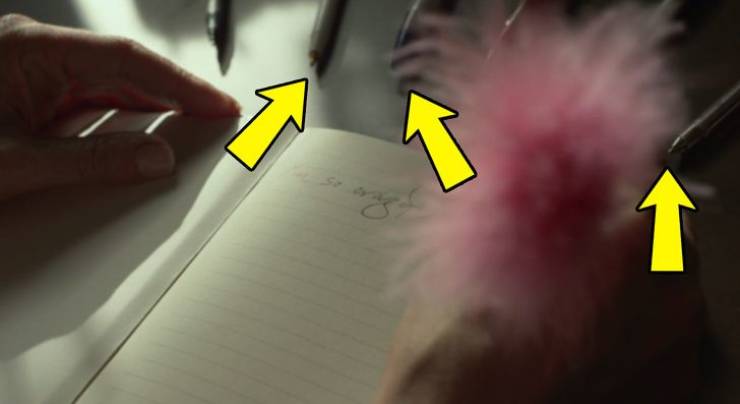 At the very beginning of Gone Girl, you can see Amy using several different pens while writing. She needed them to fake the diary. 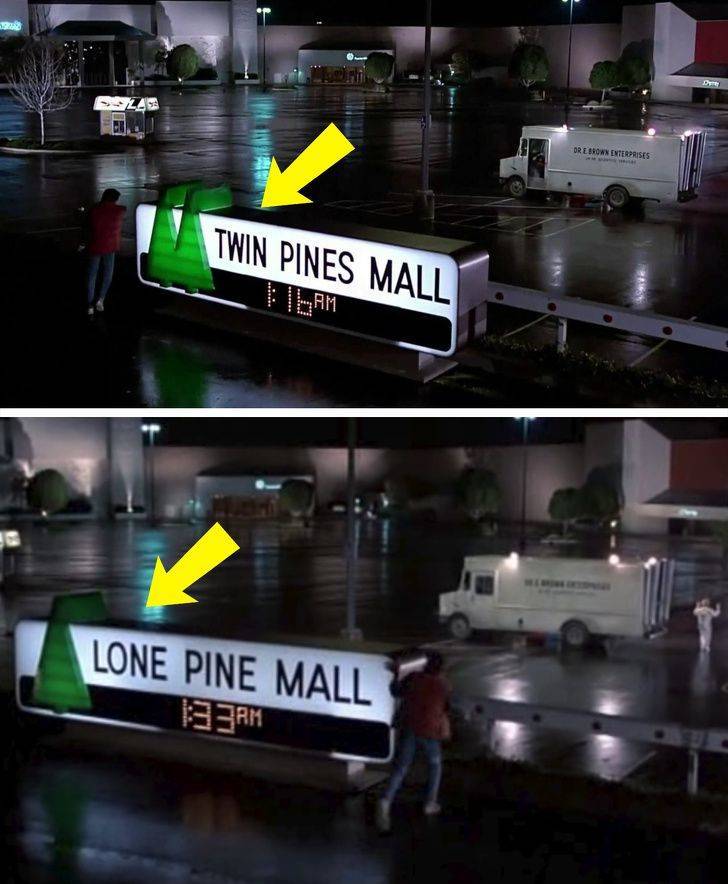 At the beginning of Back to the Future, Part II, Marty meets Doc at a shopping mall called Twin Pines that was named after the 2 pines that were there before the mall was built. But after his trip to 1955, the DeLorean bumped into one of the trees, which resulted in the mall eventually being named Lone Pine. 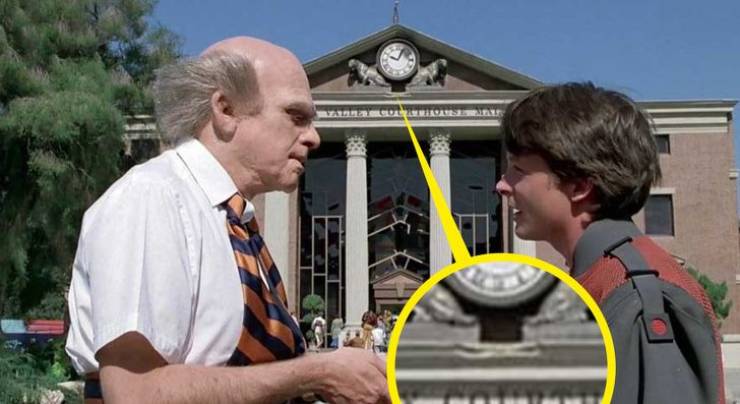 And the ledge that Doc broke in the first part of Back to the Future was also broken in the sequel. 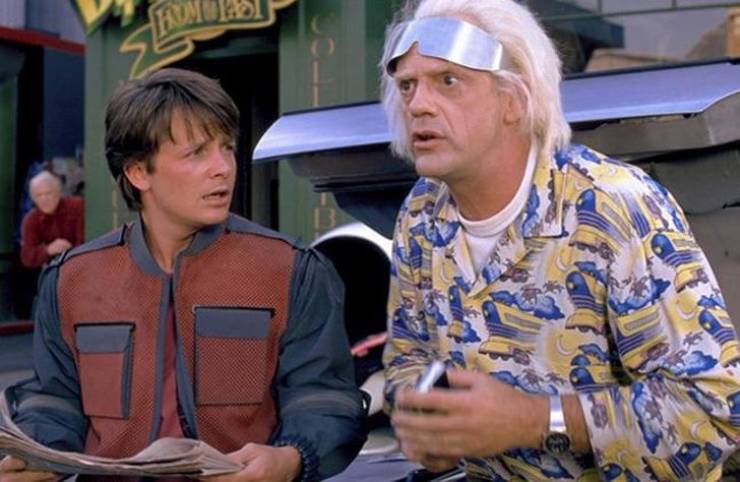 The movie’s second installment also had a small spoiler in it that referenced the third movie of the franchise. Look at the pattern on Doc’s shirt that has trains and horses on it. 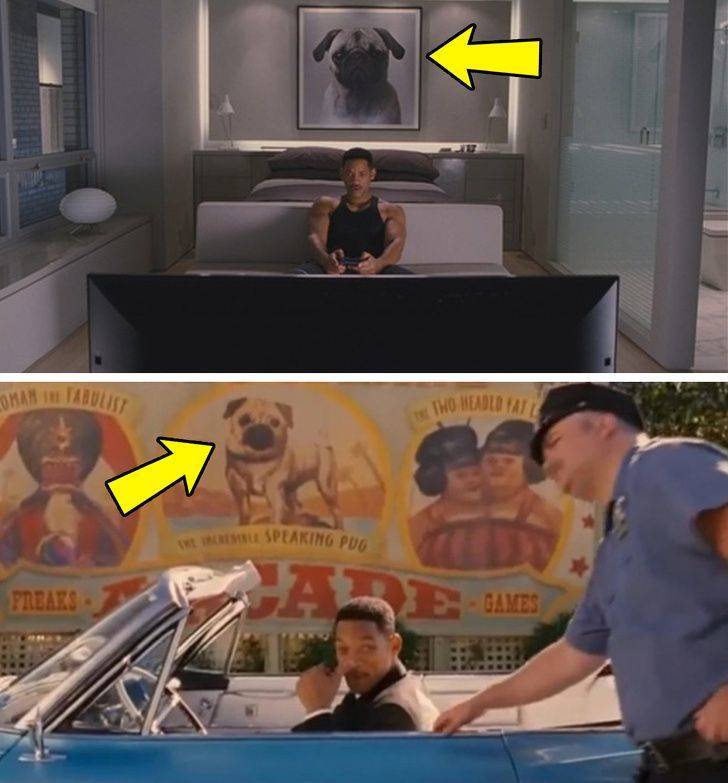 In Men in Black 3, you can see Frank’s dog you already know from the previous films. Its portrait is in J’s room from the future. Also, when he came to the future, J parked near the poster announcing a performance by a speaking pug. 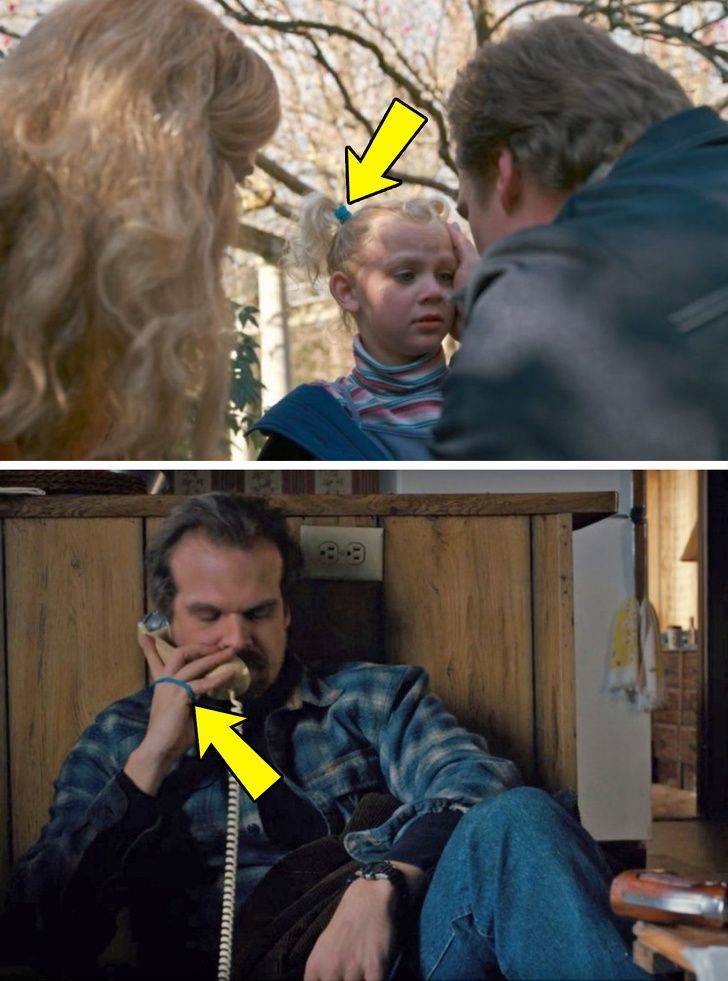 In the first season of Stranger Things, sheriff Jim Hopper wears a blue bracelet. Only after a series of flashbacks do we find out that it’s the hairband of his daughter who died. 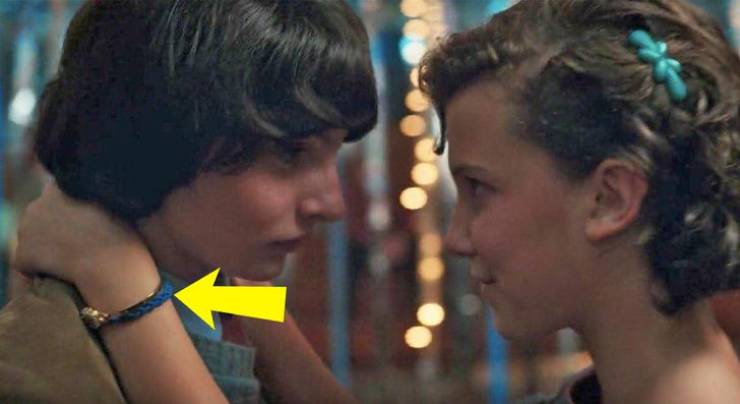 And at the end of season 2, during the ball, you can see the same hairband on El’s hand. Jim started to take care of El and gave it to her.

Following 7 month s ago
I have to say that this was kinda dumb. Actors play all kinds of roles and some of them end up crossing in details. Big deal.
Reply