Our Planet Has So Many Natural Wonders! (27 pics) 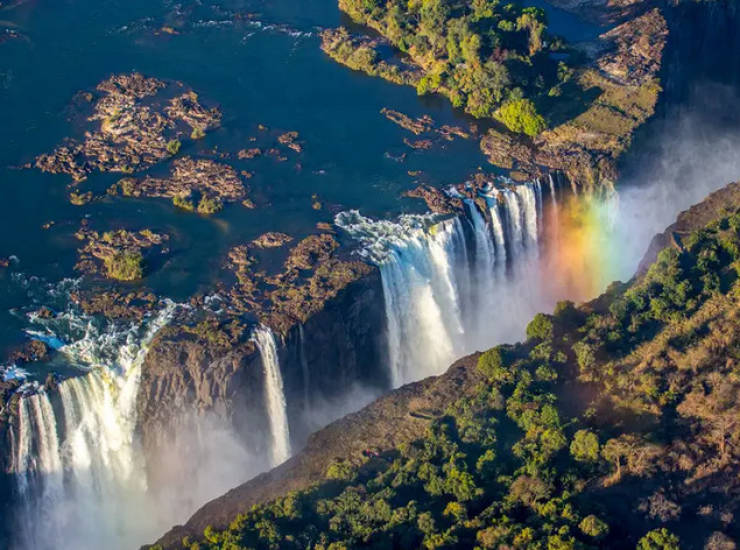 Two times as wide and double the depth of Niagara Falls, Victoria Falls is widely considered to be the world's largest waterfall, according to the Encyclopedia Britannica. The roar of the rushing water is so great that it can be heard from a whopping 24 miles away, while the rising mist from the falls can be seen from more than 30 miles away, according to victoriafallstourism.org. One of the world's youngest volcanoes, Parícutin buried two local villages in ash when it first erupted in 1943. That same year, it rose a whopping 1,475 feet from the Earth. Parícutin reached its peak at 7,480 feet in 1952, the year it finally stopped erupting, according to Encyclopedia Britannica. 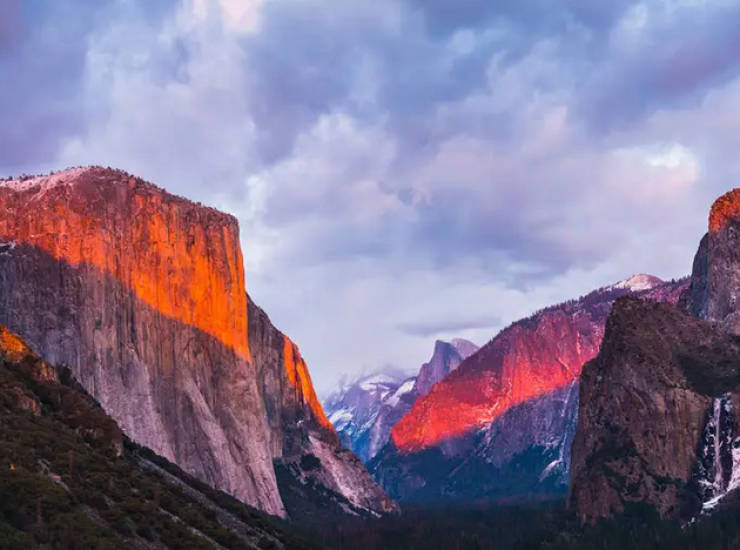 Known for its stunning cliffs, burnt-orange sunsets, and bubbling waterfalls, Yosemite is one of the most widely-renowned and popular national parks in the US. Yosemite's El Capitan was featured in the 2018 Oscar-winning documentary "Free Solo," but you might also recognize the monolith as the default background on many generations of Mac computers. 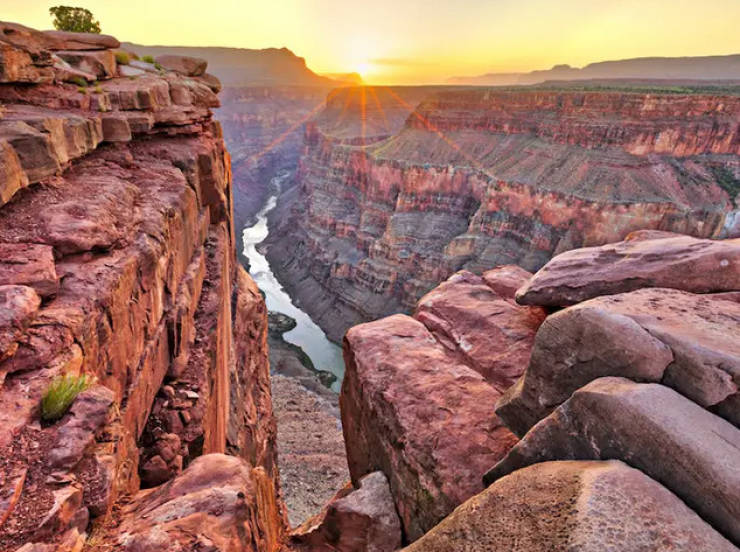 The Grand Canyon is an immense geologic wonder that was forged by glaciers millions of years ago. Its red rocks change color with the position of the sun, making for a stunning backdrop to any photo. Hiking the mile down into the canyon or rafting along the Colorado River are both popular activities among visitors, according to the National Park Service. 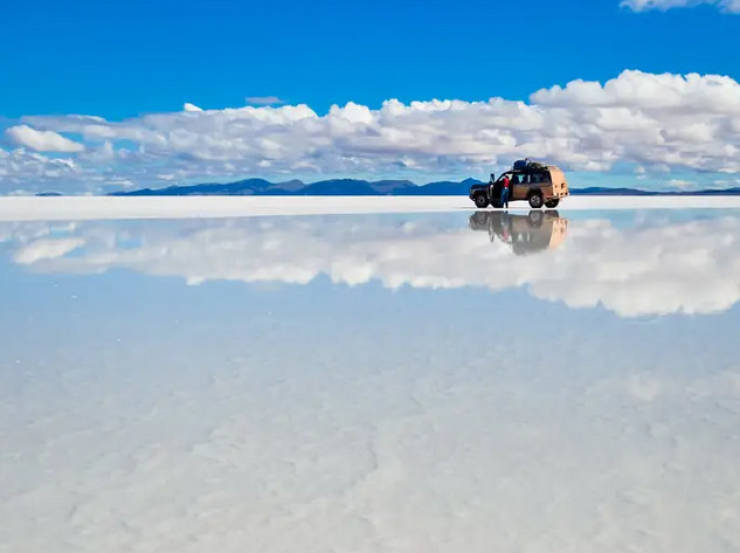 The largest salt flat on the planet, Salar de Uyuni is a 4,086-square-mile expanse of salt-crusted earth, according to National Geographic. When nearby lakes overflow, however, the region transforms into a stunning reflective pool that looks absolutely otherworldly. 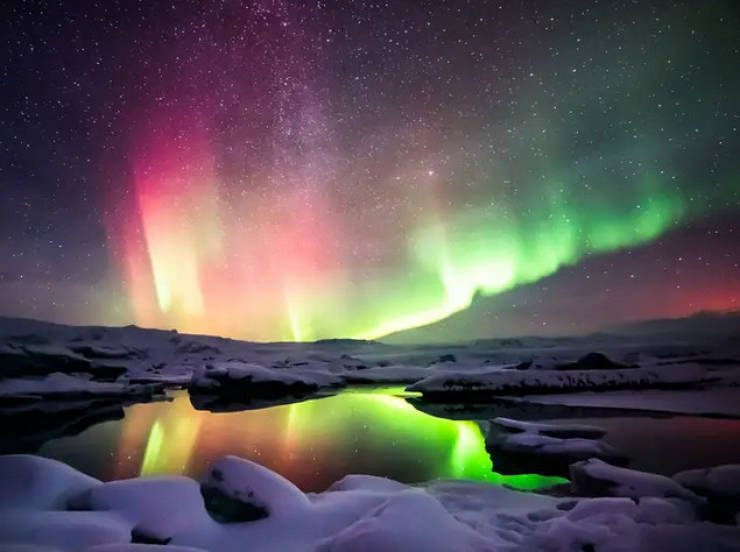 Also known as the Northern Lights, Aurora Borealis is the display of dancing lights near the Arctic Circle. The stunning explosion of colors is created by the collision of various gaseous particles with charged particles from the sun's atmosphere, according to Northern Lights Centre. 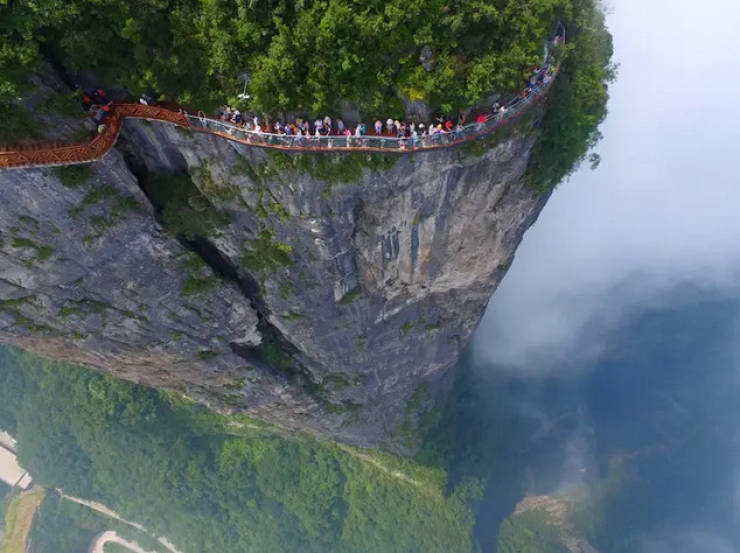 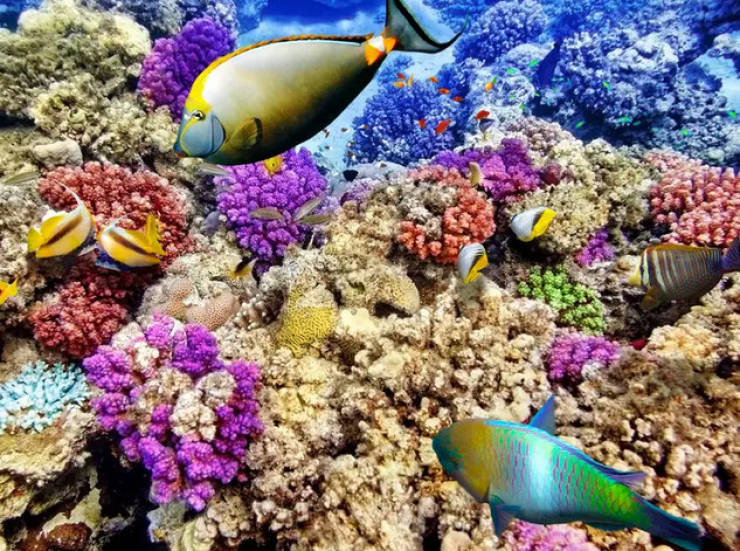 Home to the largest coral reef system in the world, the Great Barrier Reef is among the best scuba diving destinations on the planet. Stretching more than 1,800 miles down Australia's east coast, the reef is longer than the Great Wall of China and can be seen from outer space, according to greatbarrierreef.org. 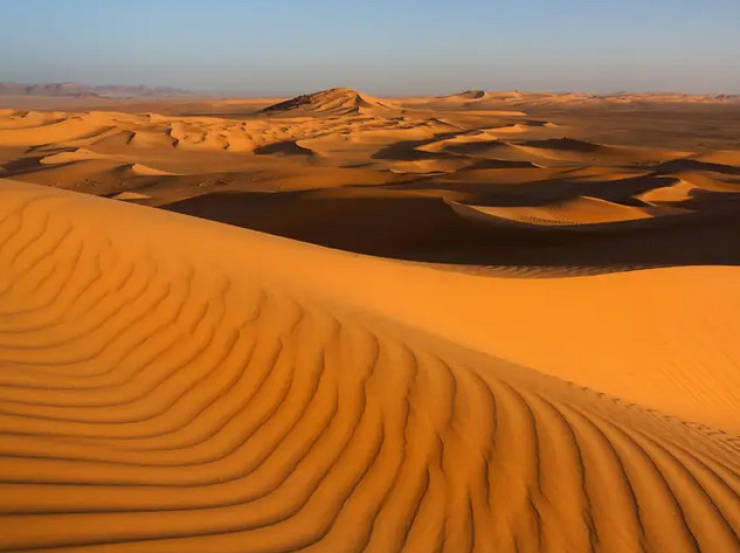 Spanning 11 African countries, the Sahara is the largest desert in the entire world at 3.5 million square miles, according to Live Science. Its sheer vastness would be enough to make the Sahara one of the most impressive natural wonders on the planet, but its rolling red sands and windswept dunes make for a landscape unlike any other. 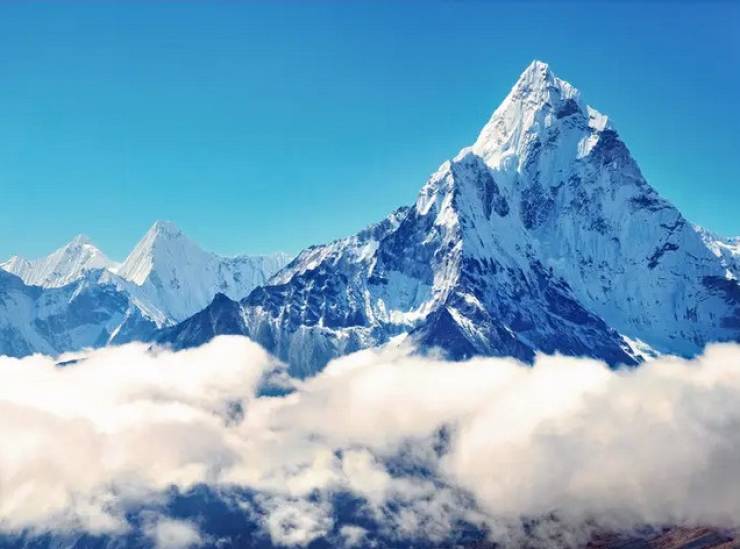 The tallest summit on Earth, Mount Everest stretches a whopping 29,035 feet into the sky above the border of Nepal and China, according to Encyclopedia Britannica. Ascending this mammoth Himalayan peak is an impressive feat attempted by few, and accomplished by even fewer. 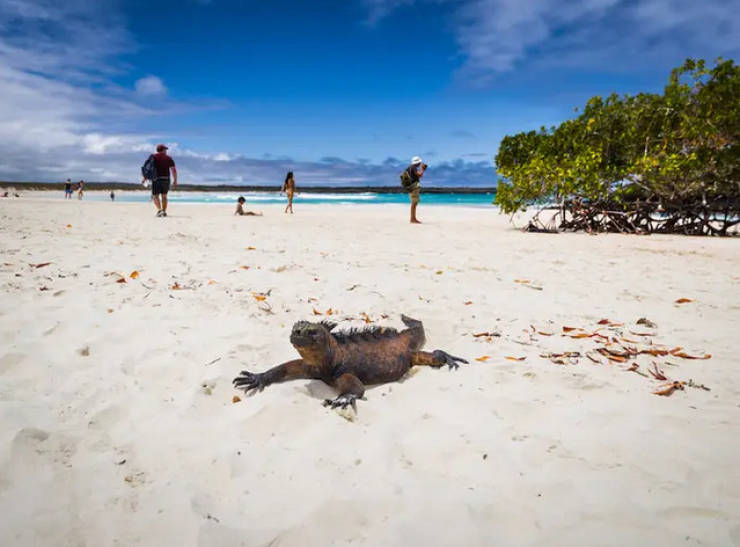 Famous for inspiring Charles Darwin's theory of evolution, the Galapagos Islands are known for their unique and fearless wildlife, according to National Geographic. The iguanas, sea lions, penguins, finches, and tortoises that inhabit the picturesque islands are certainly not camera shy — they'll approach humans without hesitation. 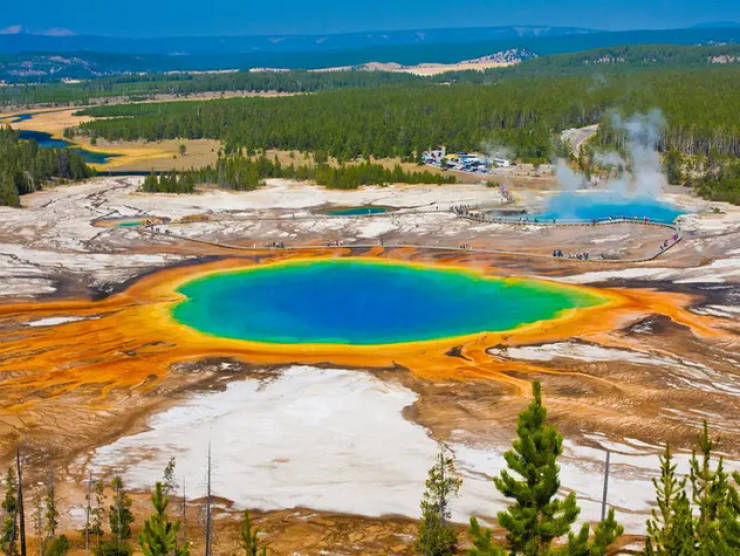 Though it isn't the most famous feature in Yellowstone National Park, the Grand Prismatic Spring is certainly the most visually stunning. Larger than a football field and deeper than a 10-story building, the Grand Prismatic Spring fans out into brilliant rings of green, yellow, and orange due to the heat-loving bacteria that call it home, according to Yellowstone Park. 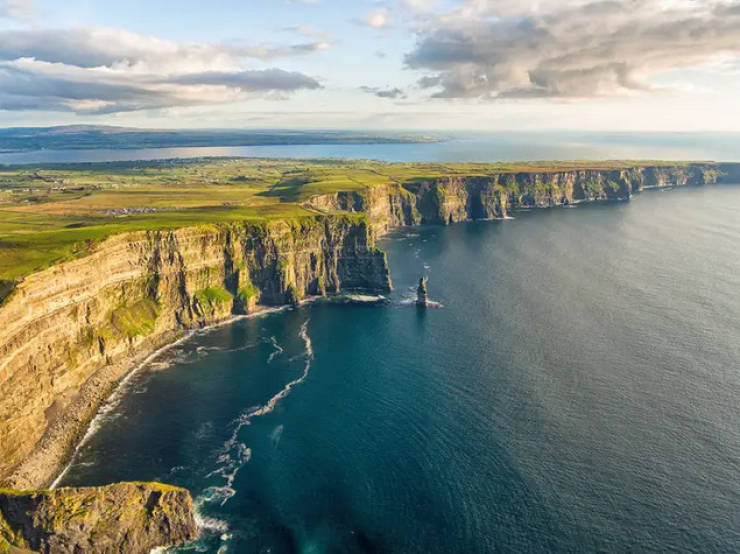 The Cliffs of Moher, one of Ireland's most popular tourist destinations, are a five-mile stretch of 700-foot bluffs overlooking the majestic Atlantic Ocean, according to its official website. The grass-covered cliffs and banded rocks are striking against the backdrop where the sea meets the sky. 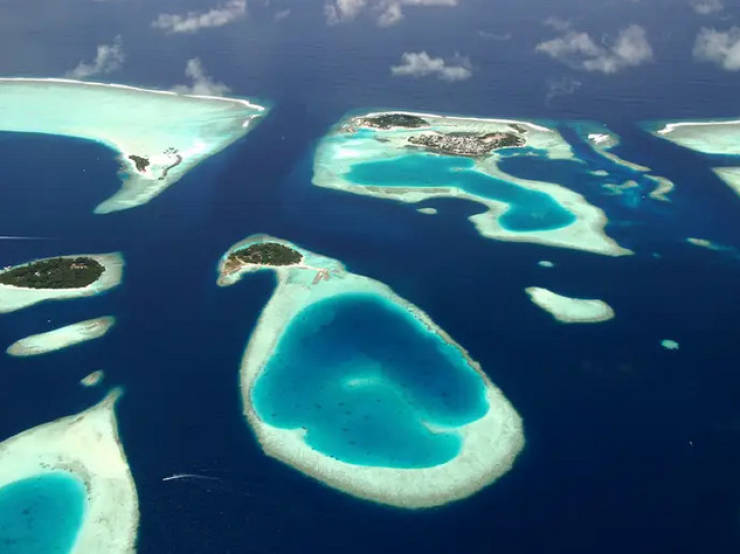 Located in South Asia, the Maldives is a tropical nation comprised of 26 atolls, or coral-based islands, according to the country's tourist website. Its white-sand beaches and stunning crystal-clear waters attract tourists from far and wide, while its coral reefs are home to one of the most astounding arrays of sea life in the world. 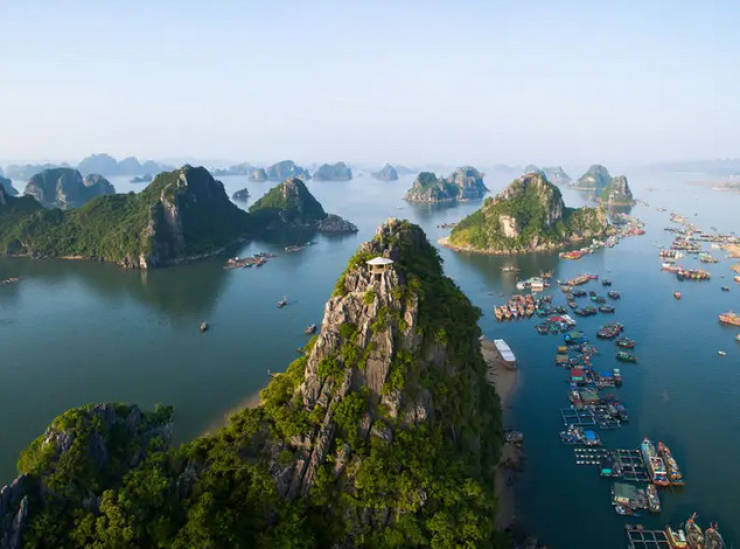 Northeastern Vietnam's Gulf of Tonkin is home to Ha Long Bay, an astounding assortment of more than 1,500 undisturbed, hulking limestone islands and islets covered in greenery, according to National Geographic. The region is a popular spot among hikers, kayakers, and scuba divers. 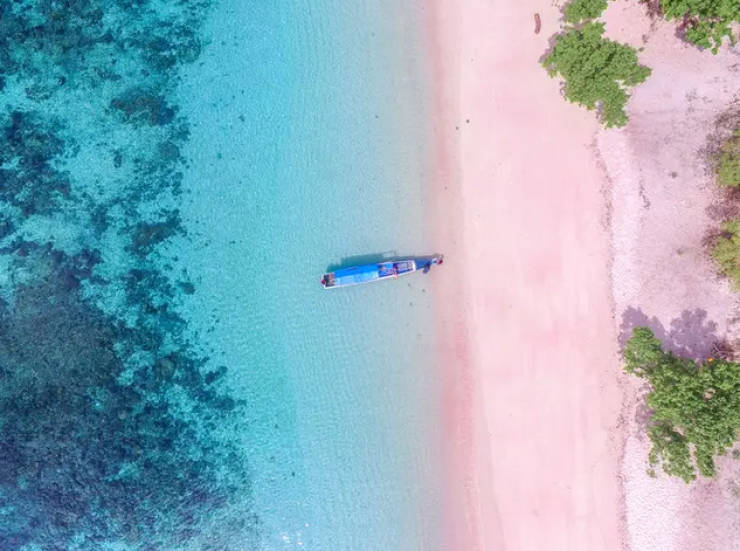 Known for its giant lizards that bear the same name, Komodo Island is also home to gorgeous tropical forests, renowned diving sites, and gorgeous beaches — one of which boasts pink sand and teal blue waters. 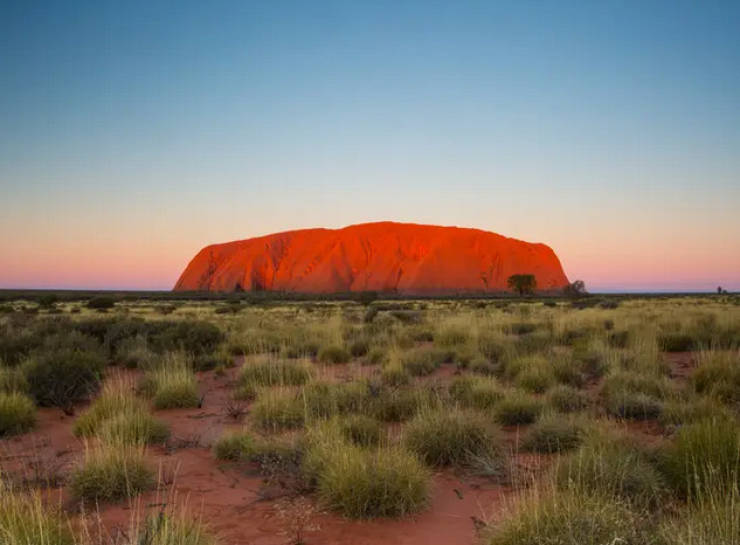 Uluru — also known as Ayers Rock — is a stunning rock formation located in a particularly remote region of the Australian Outback. The rock brilliantly reflects the beautiful hues of sunrise and sunset in the vast desert landscape. 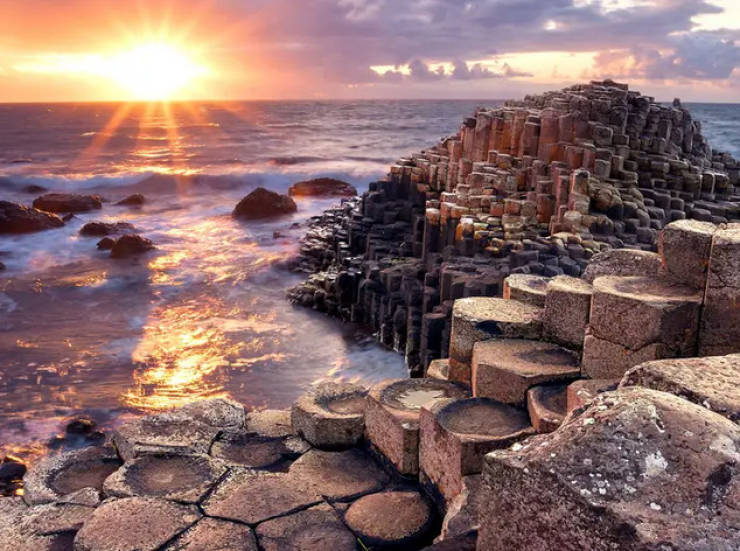 Formed by volcanic activity some 50 million years ago, Giant's Causeway is an assortment of tens of thousands of black cylindrical basalt rocks stretching out into the sea that separates Northern Ireland from Scotland. The unique display has long inspired stories of giants traversing the ocean, according to UNESCO. 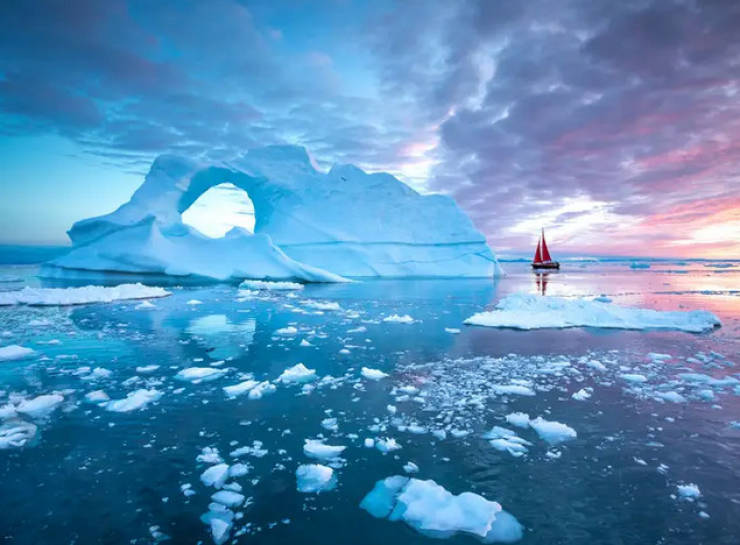 Icebergs are such a common sight in Greenland that locals once used the structures to track the changing of the seasons or identify specific towns, according to the country's tourist website. While climate change has certainly taken a toll on Greenland's stunning ice formations, visitors can still see plenty of icebergs floating in the country's waters today. 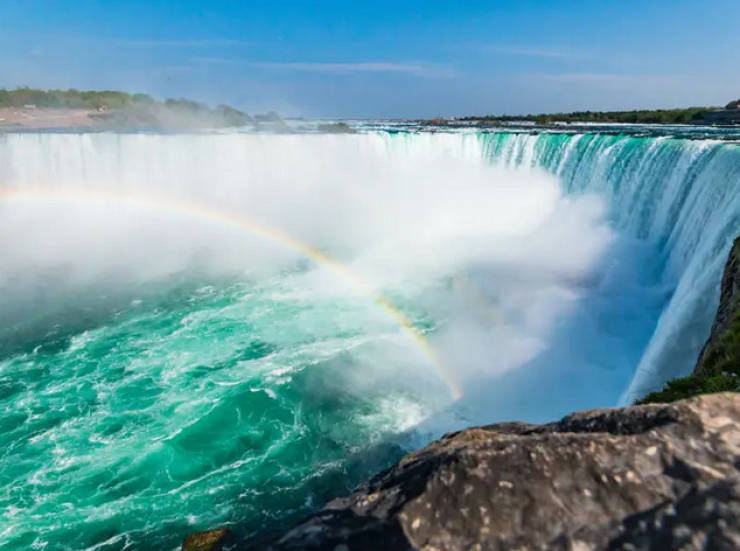 Arguably the most famous waterfall on the planet, Niagara Falls is actually comprised of three separate parts. American Falls and Bridal Veil Falls are in New York, but the most famous section of the falls is located across the border. Canadian Falls — also known as Horseshoe Falls — drops 167 feet and stretches more than 2,700 feet across, according to World Waterfall Database. Visitors can even venture beneath the falls by boat on Maid of the Mist tours. 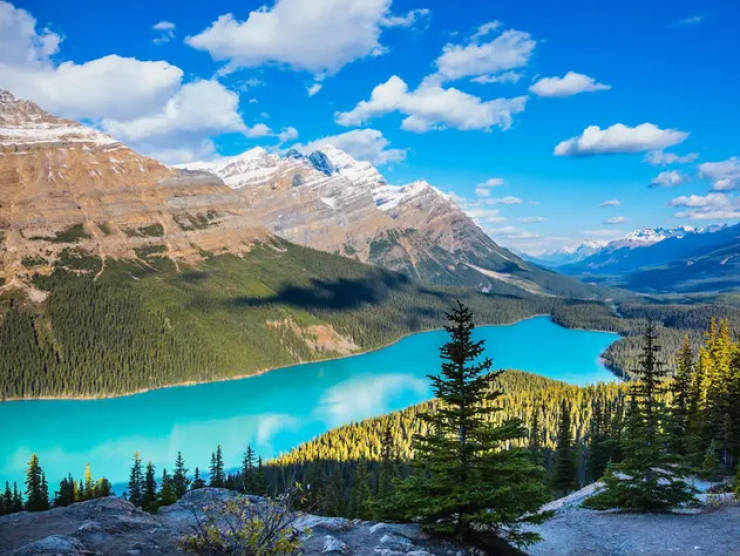 Peyto Lake, a glacier-fed lake in Canada's famous Banff National Park, is known for its breathtaking blue hue. Coupled with the picturesque surroundings of the Canadian Rockies, Peyto Lake is a must-see for any nature enthusiast. 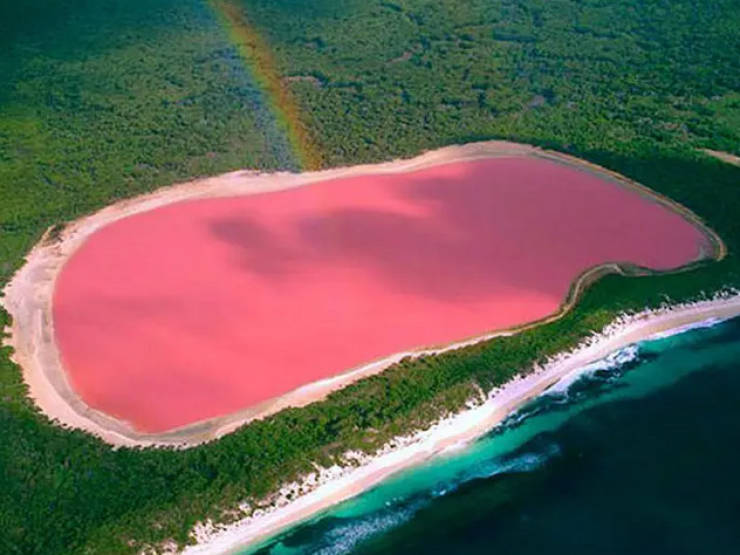 Situated mere feet from the deep blue waters of the Indian Ocean, Lake Hillier is a famous site thanks to its naturally bubblegum pink water. The lake derives its unique color from the red pigments secreted by bacteria that live in the water, according to How Stuff Works. 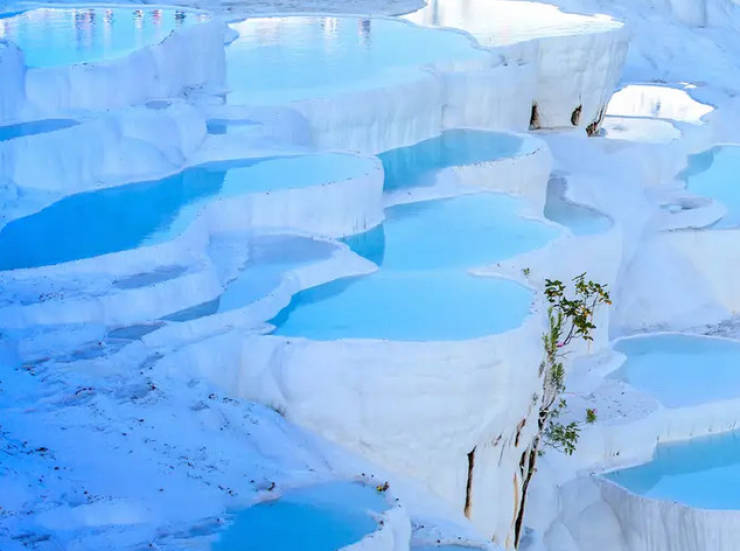 Pamukkale — which translates to "Cotton Castle" in Turkish — boasts a landscape of petrified waterfalls, mineral forests, and travertine terraces filled with thermal waters, according to UNESCO. 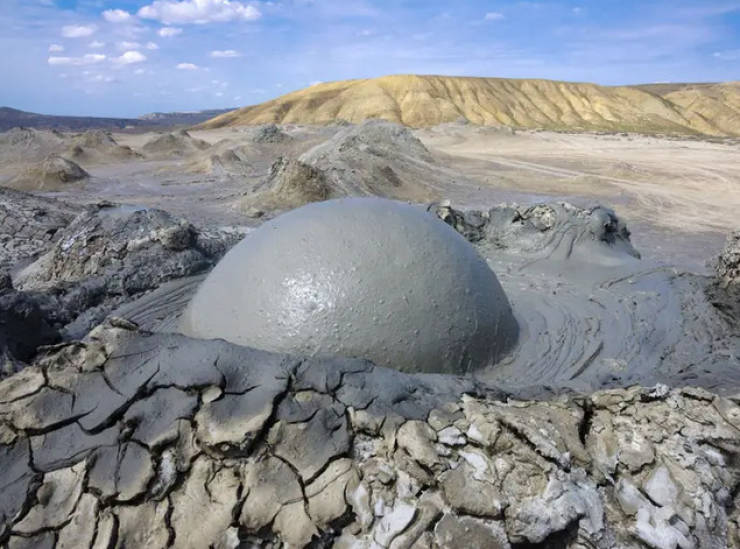 Located in central Azerbaijan, the mud volcanoes of Gobustan National Park gurgle with a combination of methane and sludge. Occasionally, however, the methane builds up and the cones erupt into flames, according to Slate. 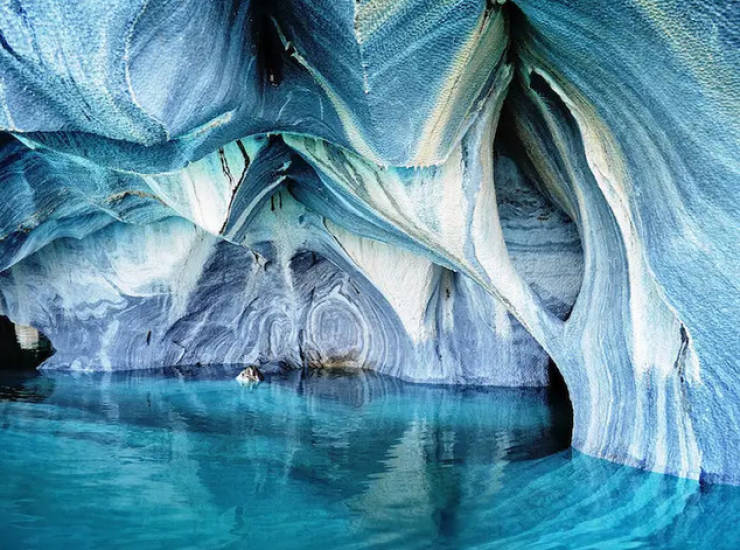 The Marble Caves in the heart of Patagonia boast streaky pastel-colored walls that surround ice blue lake water. Only accessible by boat, the waves are considered one of the most isolated natural wonders of the world, according to Chile.travel. 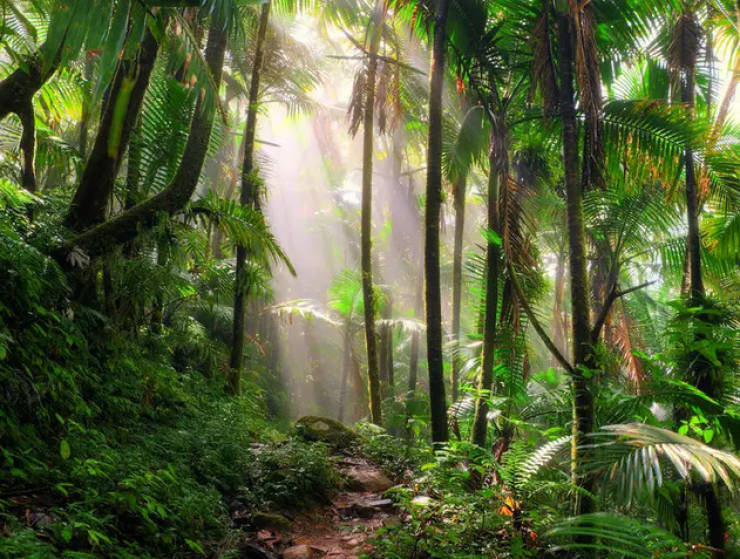 El Yunque National Forest in Puerto Rico is one of the most ecologically diverse forests in the US despite its relatively small 29,000-acre spread. Home to parrots, snakes, frogs, and lizards, El Yunque is also the country's only tropical rainforest, according to the USDA. 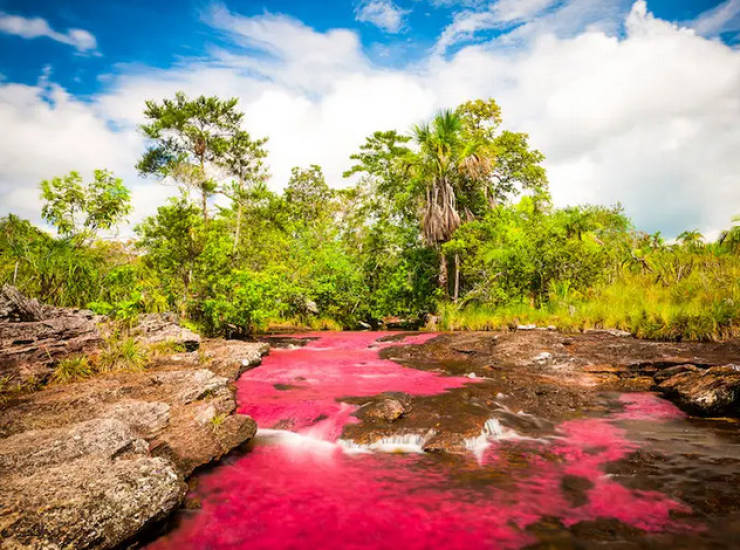 Dubbed the "river that ran away from paradise," Caño Cristales is just like any other bubbling brook for most of the year. However, between the wet and dry seasons, a species of plant called Macarenia clavigera blooms beneath the surface of the water, transforming the river from its usual blue hue into a brilliant red, according to Atlas Obscura. Yellow and green sands that are visible beneath the surface add further bursts of color to the river.