Real Facts That Could Make You Suspicious (22 pics) 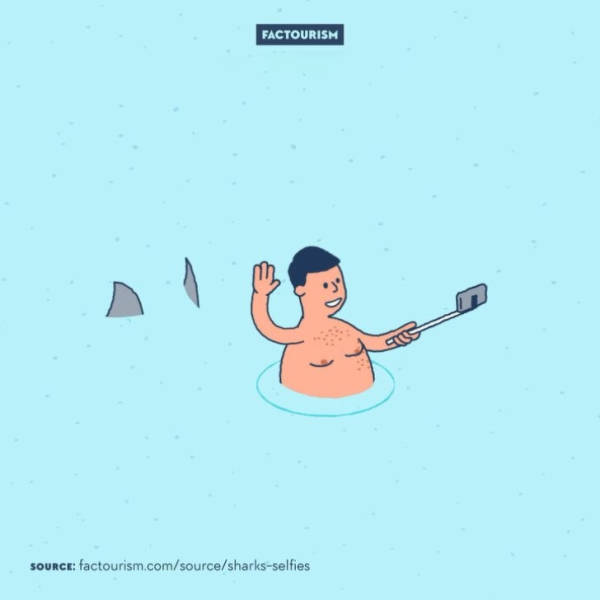 In September 2015, a 66-year-old tourist fell off the stairs while trying to take a selfie near the Taj Mahal and died. This tragic event became the 12th death caused by selfies that year, whereas sharks had killed only 8 people. 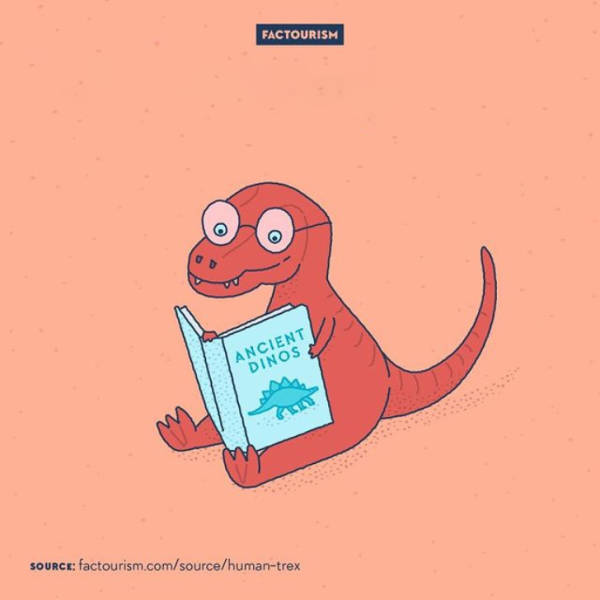 Today, planes fly slower than they used to in the past. 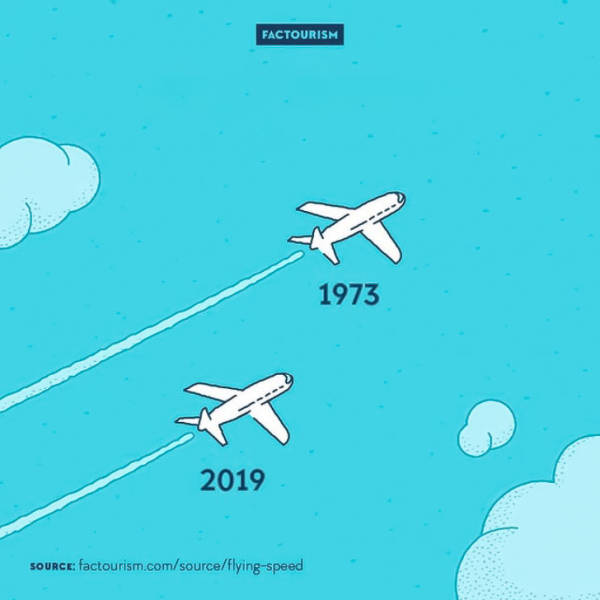 Today, a direct flight from New York to Houston takes 4 hours. In 1973, the same flight would’ve taken a little less than 3 hours. The thing is, the price for fuel has increased significantly since then. And the air companies understand that they are able to save millions of dollars per year if they just fly slower.

Cleaning at home is just as harmful for your health as smoking a pack of cigarettes. 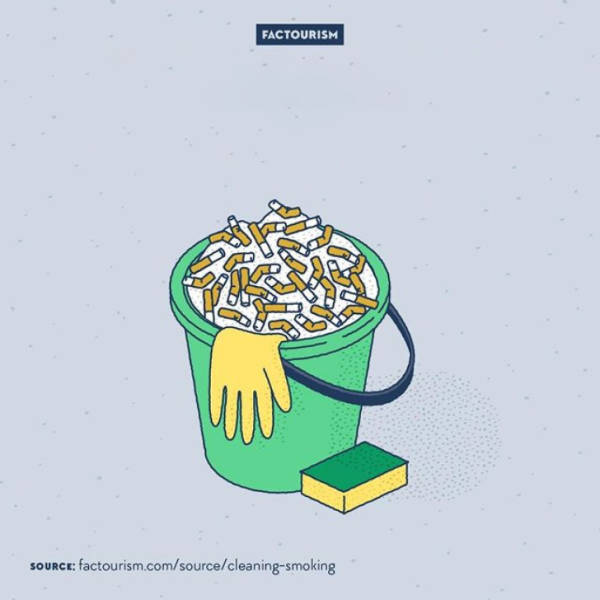 Inhaling the chemicals contained in home detergents increases the risk of developing asthma by up to 43%. The chemicals irritate the mucus of the breathing pathways and can lead to long-term changes in how they function.

There are so many different kinds of apples, that if you eat one of each kind per day, it would take you 20 years to try them all. 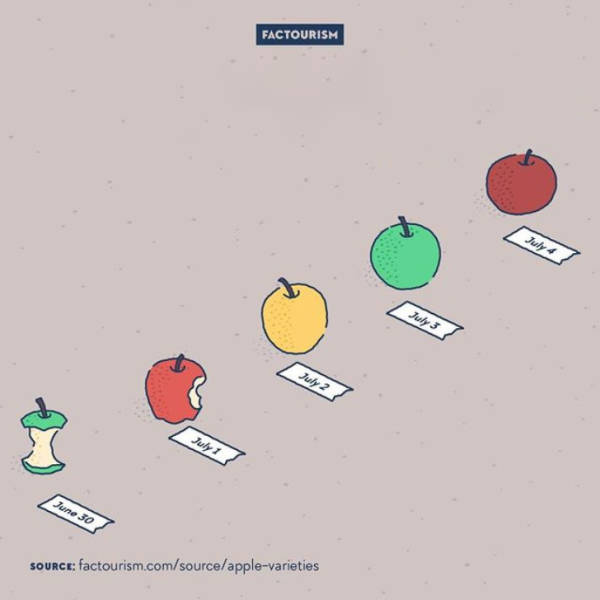 Wine glasses are 7 times bigger now than they used to be in the past. 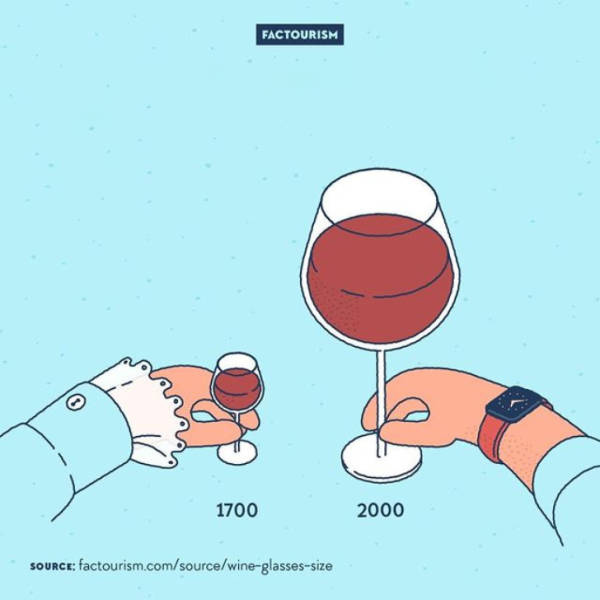 At the beginning of the 18th century, a glass of wine could only hold 66 ml of the drink. And today, people often drink from glasses that can fit half a liter. So, in the past 300 years, they have increased in size by 7 times, and the most significant changes have happened in the past 20 years as the consumption of wine has increased.

Steve Jobs chose the name Apple because it was before Atari in the phone book. 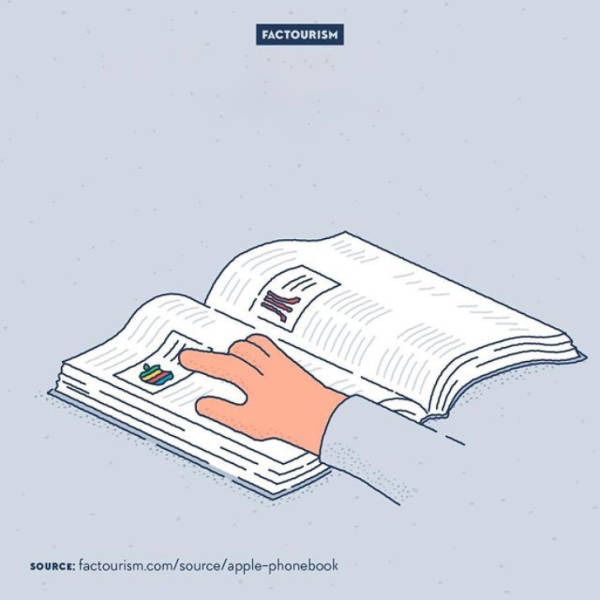 There are several legends about how the name Apple was chosen. The most realistic story is when Steve Jobs and Steve Wozniak were driving and Jobs said, “I’ve got a name: Apple Computer.” The guys continued to try to come up with different names, but they couldn’t. Later Jobs said, “And also remember that I worked at Atari, and it got us ahead of Atari in the phonebook.”

Cows that are called by their names produce 258 more liters of milk per year compared to those that don’t have names. 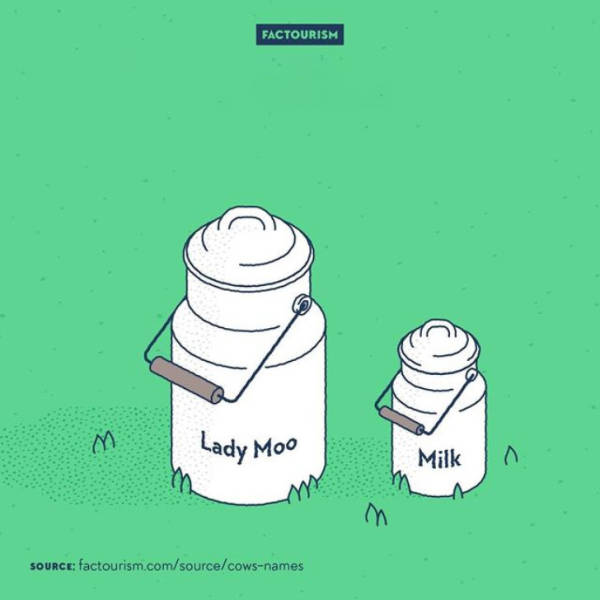 A study by scientists offers farmers a smart and easy way to make their cows produce more milk: all they have to do is be more attentive to them, pet them, and say their name more often. Researchers think that the cows that have names and are called by them feel more relaxed, whereas stress hormones reduce the production of milk. 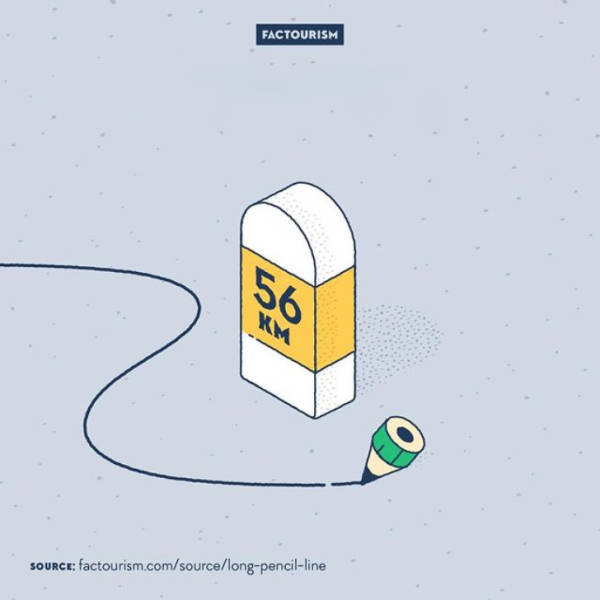 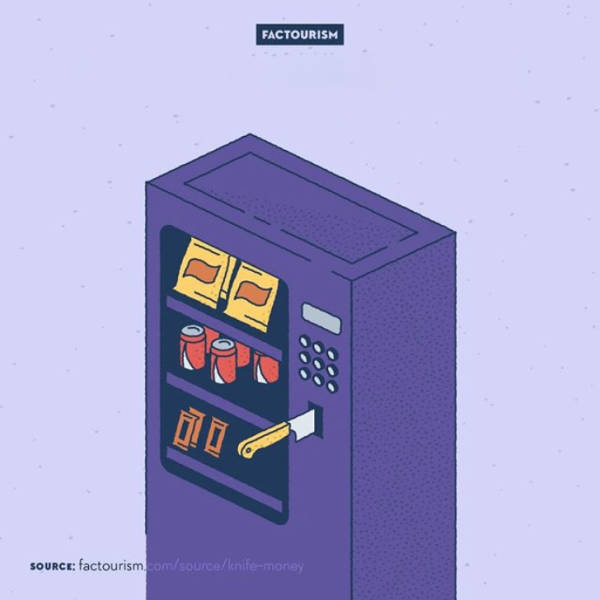 Bronze knives played the role of money in the territory of China between 600 and 200 years BC, during the reign of the Zhou dynasty.

Thanks to flat screens and high resolution, dogs can watch TV just like humans. 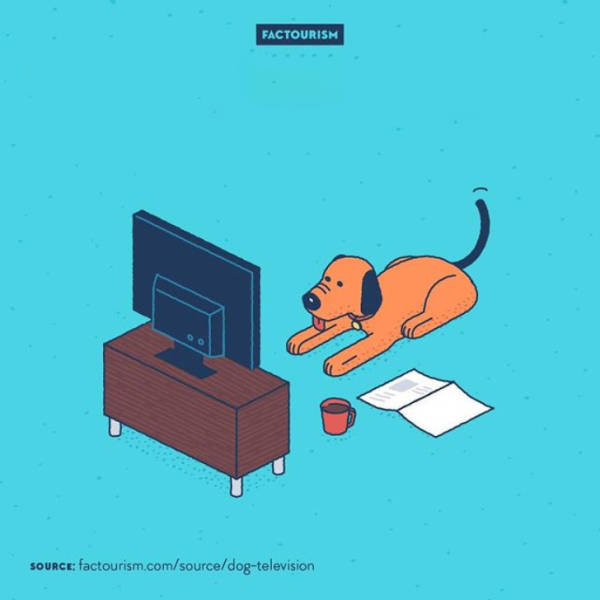 The picture on a standard TV screen is updated 60 times per second. For the human eye, pictures that appear faster than 50 HZ are seen as continuous motion. And dogs see separate pictures at 75 HZ, because their eyes are designed to react to motion. This is why the video on the screen is probably seen by dogs as separate pictures: the animals most likely see this motion as unrealistic, so they are not interested in it. But modern technology allows us to make high-res screens: this video doesn’t seem to be unrealistic to our pets and seems to hold their interest.

Another reason why dogs don’t watch modern TVs is that the screen is at a level that is comfortable for human eyes. If you put it on the floor, your dog will most likely be interested in what is going on. 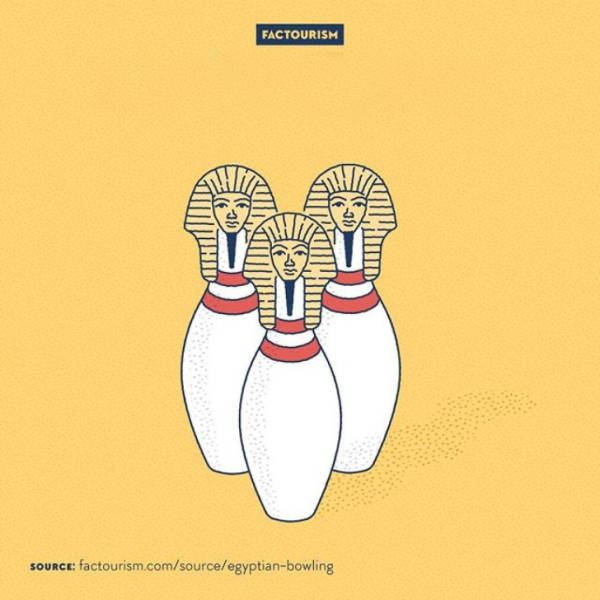 Bowling was popular in Ancient Egypt 5,000 years ago. Egyptians bowled in huge halls, with 2 people playing at the same time (every player was at the end of a 4-meter lane). One person threw a big ball and the other one threw a small one.

Only 5 modern countries have never been colonized by Europe. 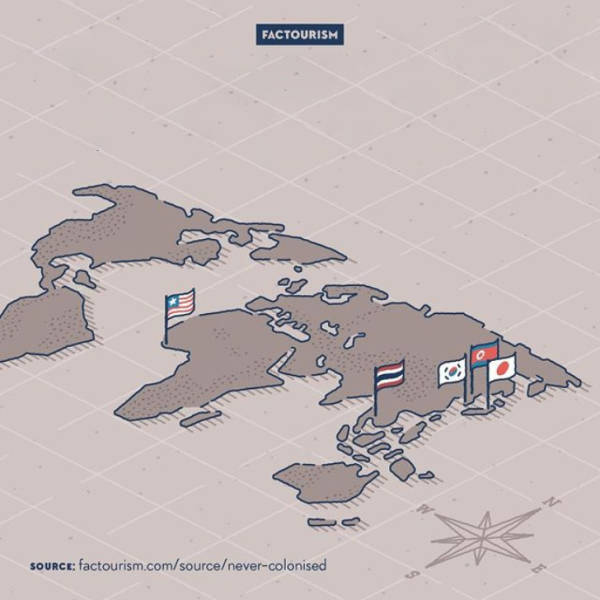 Almost every country on the planet was colonized during the period from the beginning of the 16th century until 1960. Some countries were either under protectorate or mandate, and others were completely ruled. And only 5 modern countries were able to avoid European reign completely: South and North Korea, Japan, Thailand, and Liberia.

Rabbits can sense the smell of other rabbits that have been killed in the feces of predators. 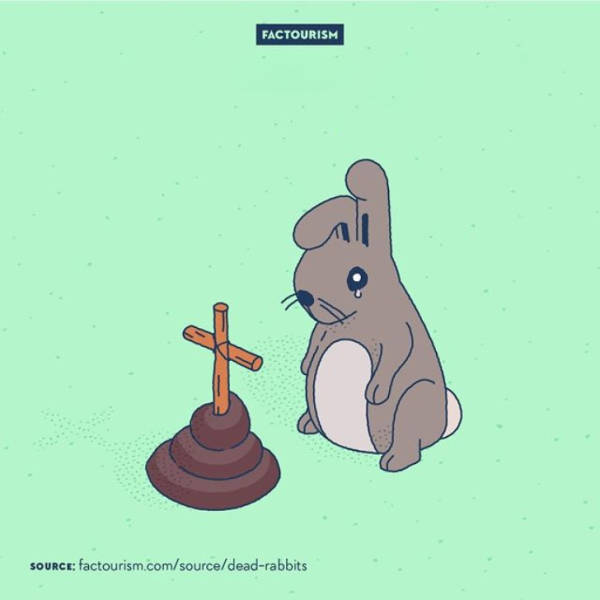 European rabbits are prey for 30 different kinds of predators, so it is not surprising that they have developed a lot of different ways to adapt and survive. New studies by scientists have proven that rabbits can sense the smell of their own kind in the feces of ferrets. This gives them a chance to avoid the places where their predators live.

The amount of Nutella sold in the world in a year is enough to cover more than 1,000 soccer fields. 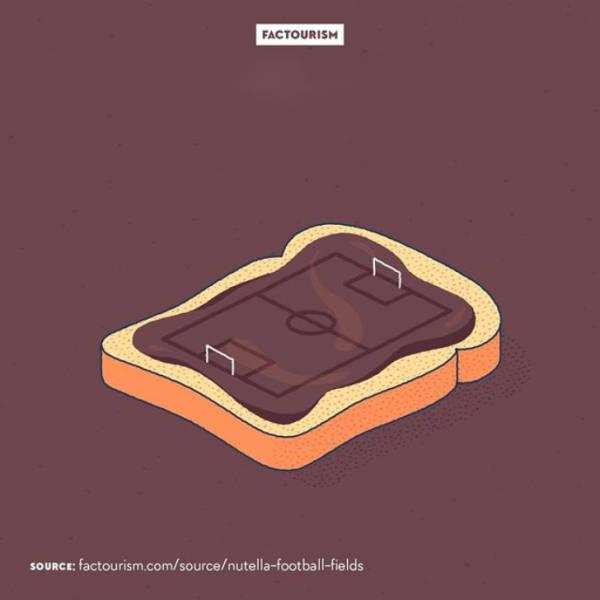 Nutella was first produced in 1940 and children and adults loved it so much that they (and we) still eat a lot of it. And if every single bought bottle of Nutella per year was put on toast, it would be possible to cover more than 1,000 soccer fields with them.

It takes 12 bees their whole entire life to make one teaspoon of honey. 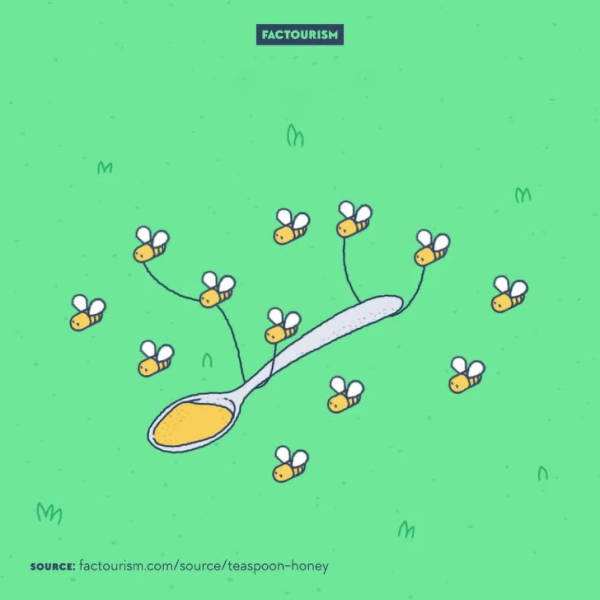 During its entire life (bees live for 4-5 months), an average bee produces only about 1/12 of a teaspoon of honey. So, one teaspoon of the sweet product you put in your tea in the morning took 12 bees’ lives to produce.

Most people can tell the difference between hot and cold water when it is flowing. 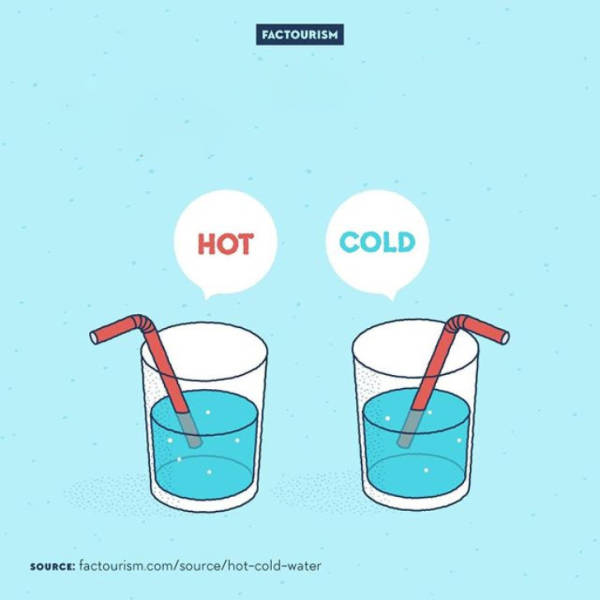 96% of people can tell the difference between hot and cold water by ear. A company called Condiment Junkie, that specializes in sound design, came to this conclusion. You can check here to see if you are part of the 96%. 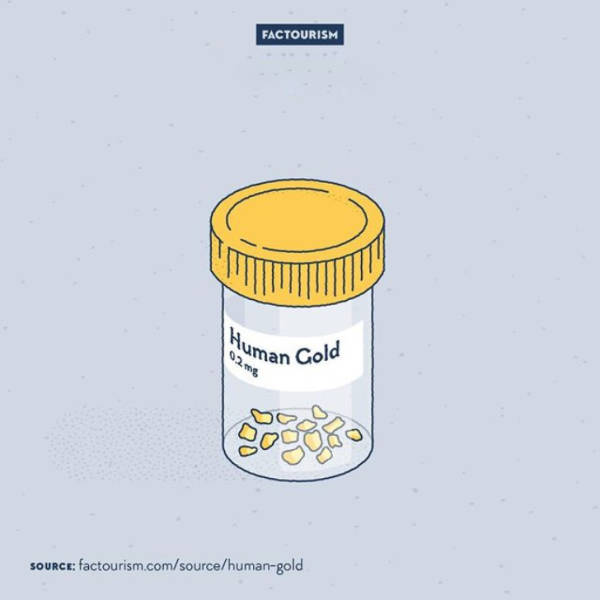 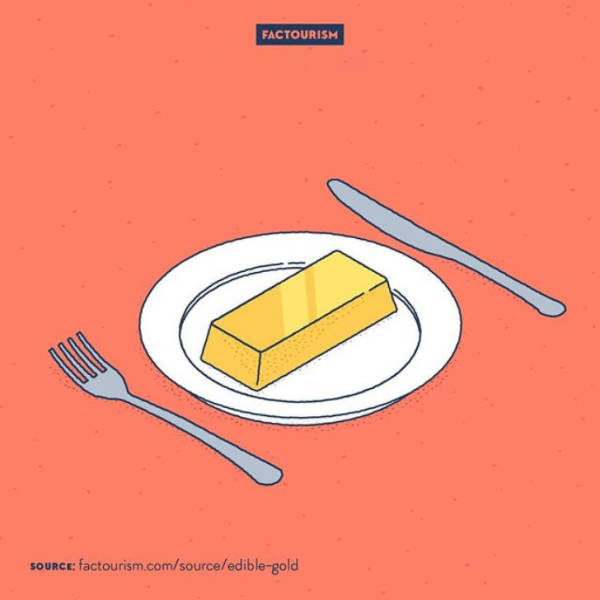 Food can be incredibly expensive. For example, in New York, you can eat a burger that costs $600 — with lobster, truffles, and... gold leaf.

You can eat a portion of 24-carat pure gold and be healthy. Pure gold goes through the digestive system and doesn’t get absorbed. So, rich people don’t have to be afraid of anything. 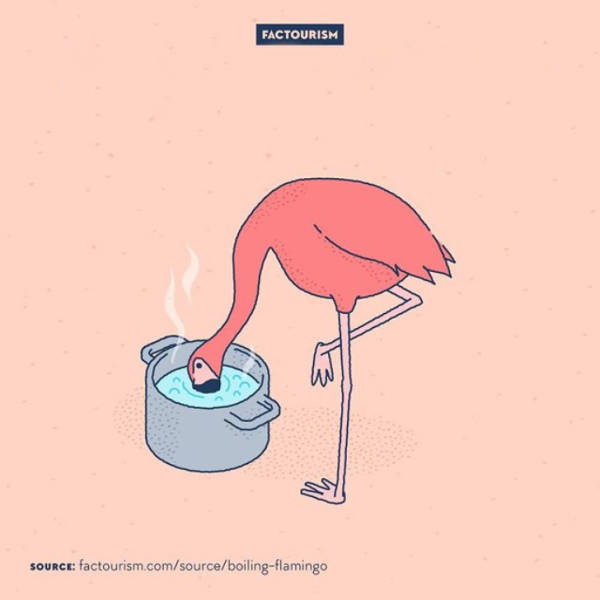 These birds can drink water that is almost boiling. The thing is, most lakes where flamingos live have a very high concentration of salt. And the only source of potable water for them are boiling geysers.

Being a bad driver is partially a genetic trait. 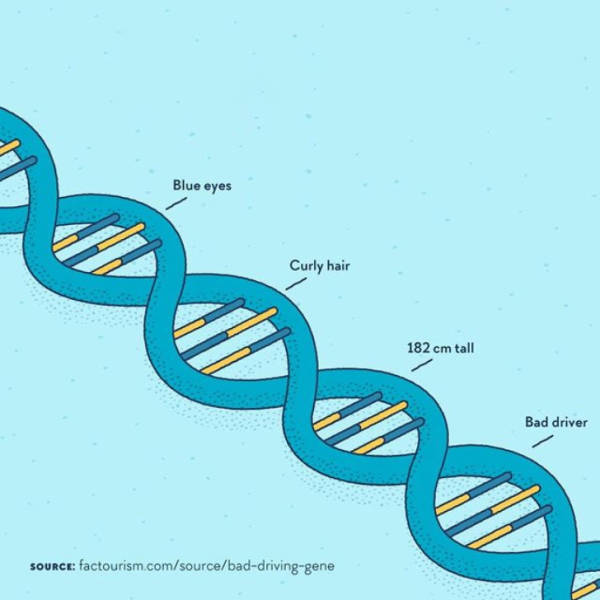 A small study showed that the inability to drive can be inherited in your genes. 29 people took part in the experiment: 22 without the so-called driving gene and 7 people that had it. The participants with this gene showed results that were 20% worse in the simulation tests, and other tests, than other members of the group.

Fanta was created in Nazi Germany because there were problems with the shipment of the syrup for Coca-Cola. 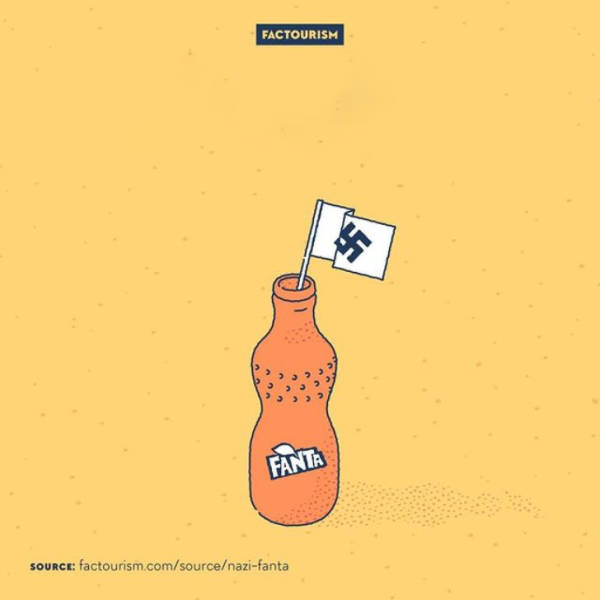 This drink appeared in Germany in 1940. Because of the embargo that the Allies of World War II imposed, the shipment of the syrup that is necessary for the production of Coca-Cola was stopped. So, a new syrup was created from the products that the country had. It is based on milk whey and apple mash. The drink was very different from what we know now.

Other 6 month s ago
#9 This would mean the average word stretches about 1.24m or just over 4 feet. Didn't measure it, but that sounds like an awful lot for most of the words.
#11 What does resolution have to do with refresh rate?
Reply
0