Guy Loses Three Of His Close Ones, Sells Everything And Goes On An Adventure With His Pet Ferret (16 pics)

Charlie quit his job and went traveling with his pet ferret, Bandit 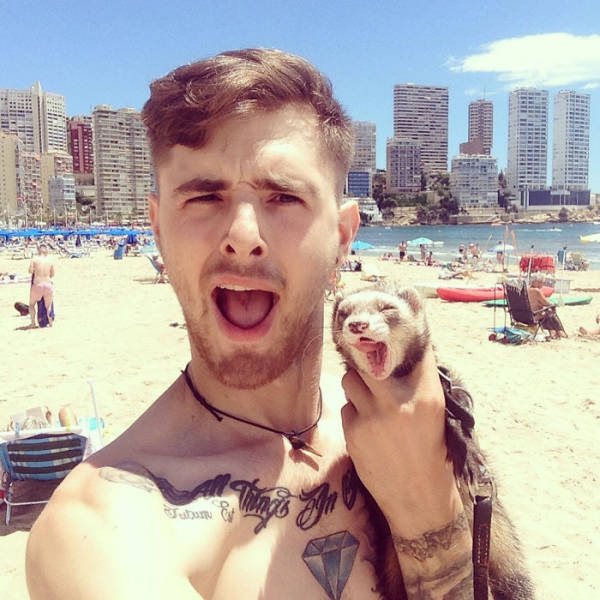 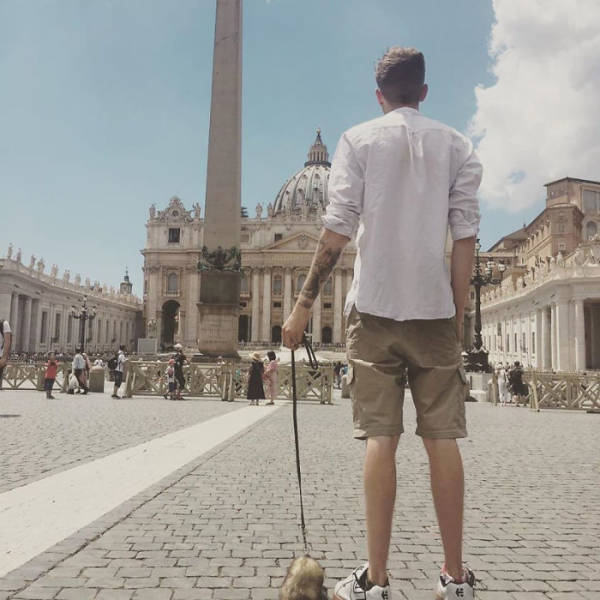 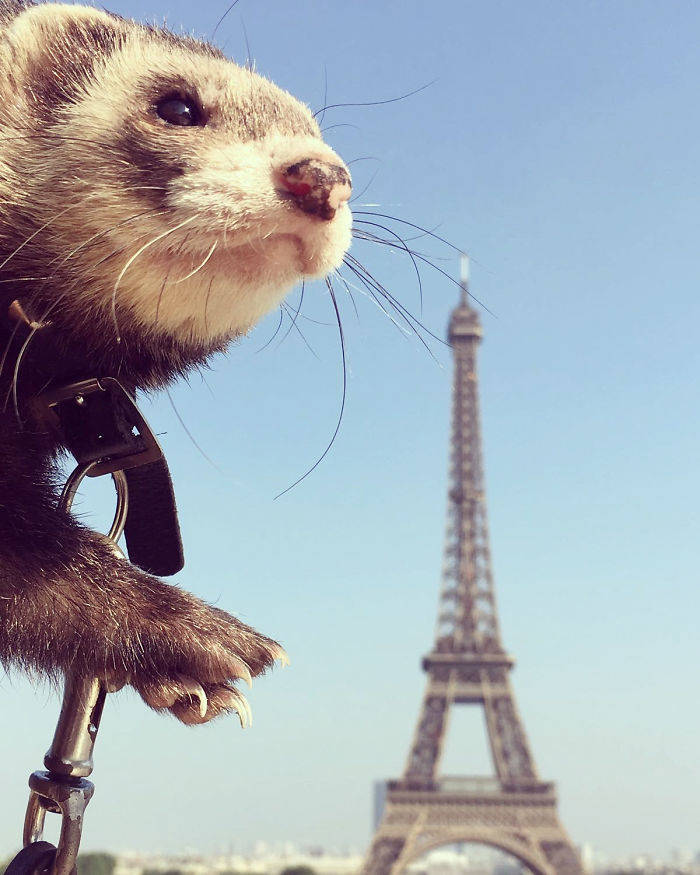 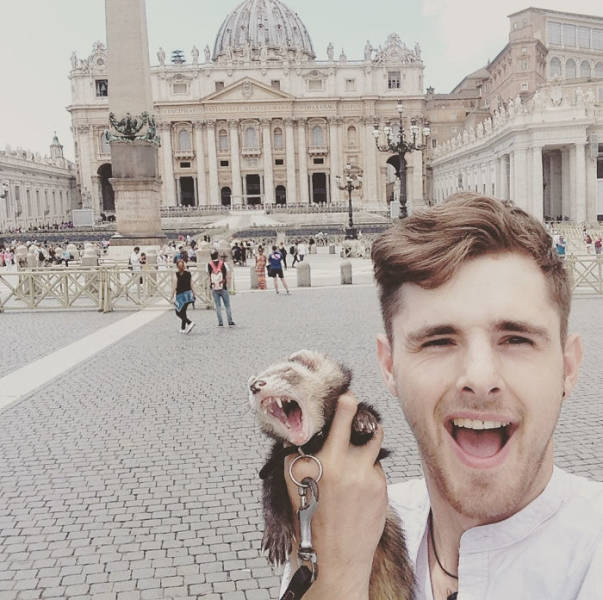 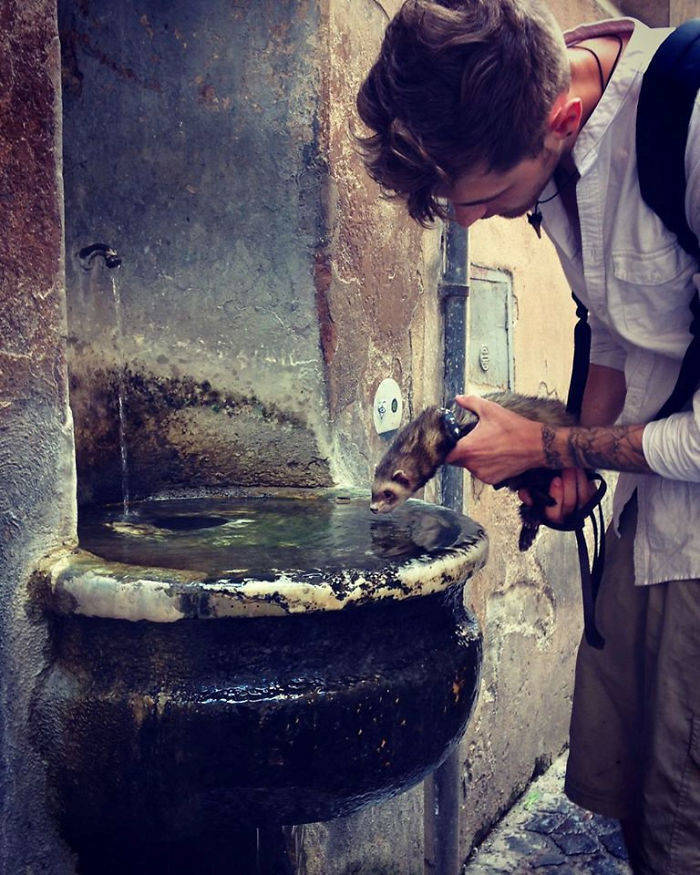 According to Charlie, traveling with Bandit was very easy. “Just like a dog, he had a lead, collar and walked for miles which is quite unique to ferrets. When he got cold, he’d jump inside my jacket, or if he was hot he’d splash in water!”

“Carrying him around hot countries was challenging, so we used to carry a cool bag with us everywhere for him to keep the heat out, especially in places like Pompeii… yes… we did walk Bandit through Pompeii! He would eat kibble, raw eggs and occasionally meat, but that was tricky to keep when we were on the road in the camper.”

Charlie had some helpful advice for people who are currently in a dark place. “You’re here. You’re alive. You’re breathing, even if sometimes it doesn’t feel like it. Because you’re still here, there’s still something to learn, there’s still someone to teach and there’s a reason to your suffering.”

“Maybe it’s that goal you have, family you want to support or even just a school education you want to achieve,” he said. “Whatever it is, these challenges you face are revealing the person you were placed here on Earth to become, and if you quit now, the light of your life’s work will quit too, refusing the world the teaching you came to give, and only you can give! You’re down, but you’re not out, because a winner never quits, and a quitter never wins!”

Together, they visited 14 countries 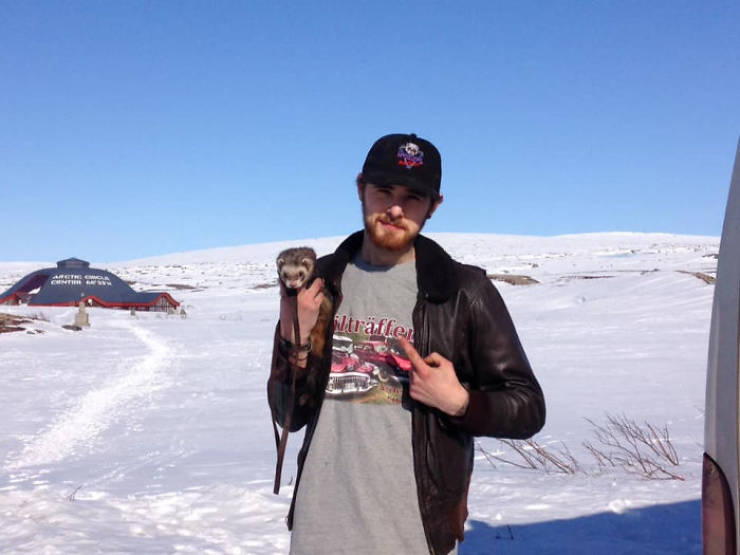 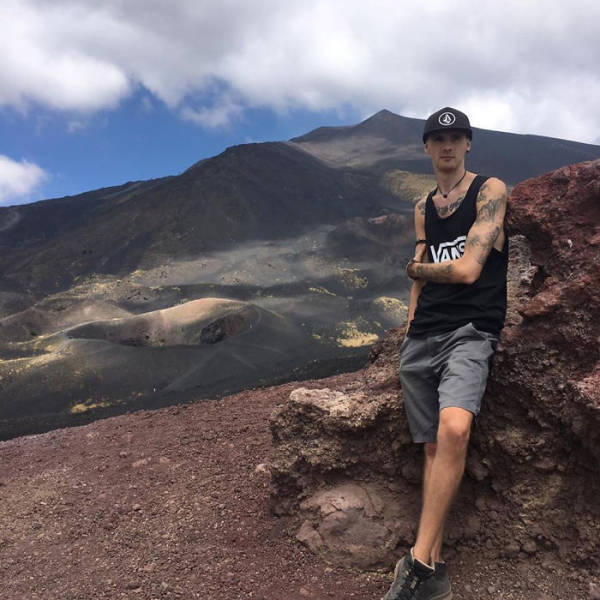 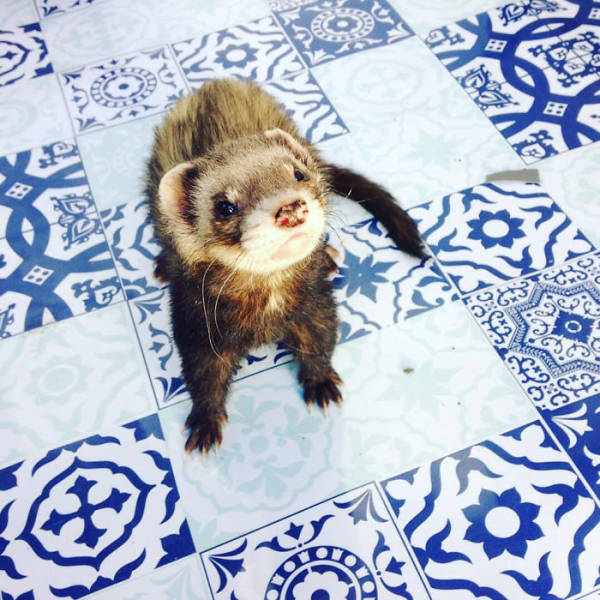 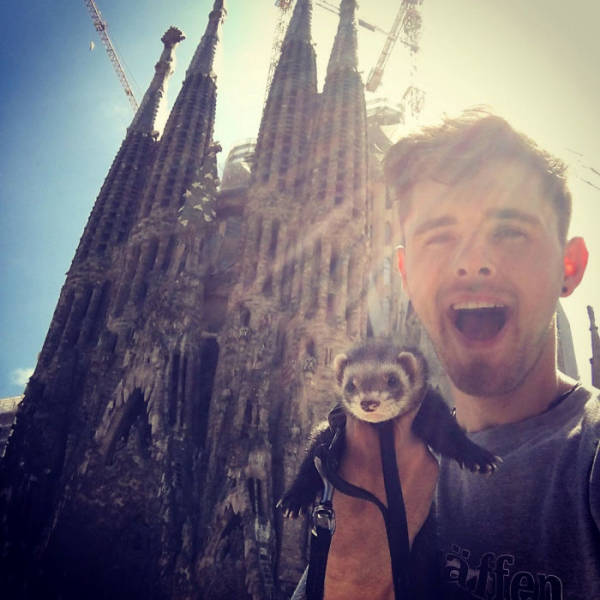 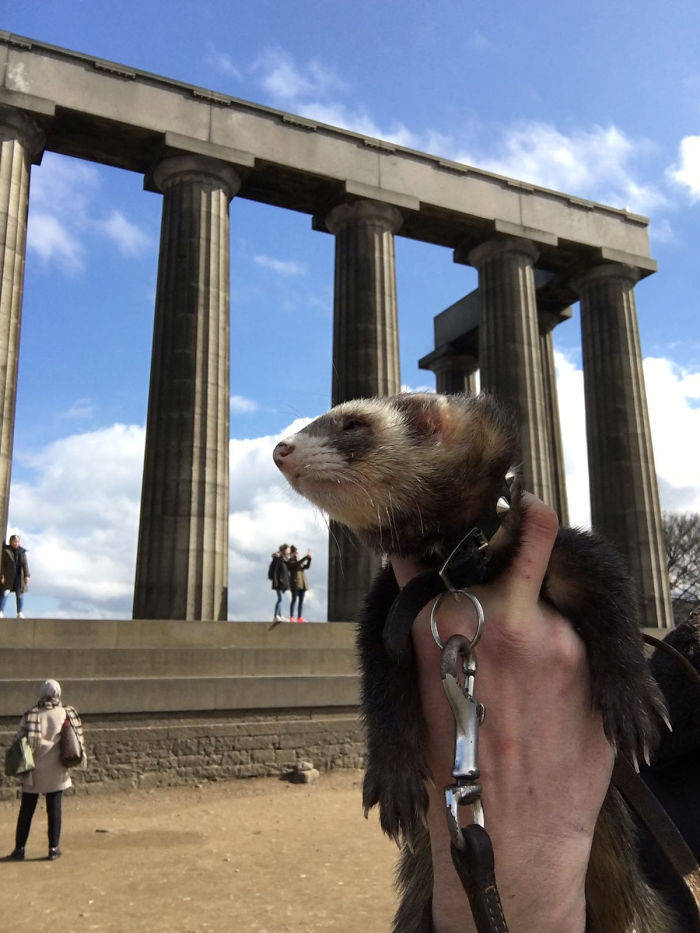 Unfortunately, Charlie had some sad news for Bored Panda. According to the ex-RAF airman, Bandit passed away shortly after they finished their travels. “Bandit and I parted ways when he packed his spiritual rucksack and hitchhiked heavens highway a year ago. It was a week after we returned to England, so it was the perfect end to our crazy adventures. We raised lots of awareness for mental health and veteran charities, so I decided to be an active player in this field by writing a book called ‘Before Our Adventures,’ focusing on how I overcame my attempted suicides, homelessness, and a number of close family deaths all with the help of Bandit the ferret.”

After finishing his travels, Charlie started his own business. “I then started a company called ‘Adventure Bandits’ where I coach and teach children to embrace nature, learn about themselves and develop strengths all through the ancient skill of bushcraft, your kind of Bear Grylls kind of stuff! It’s immensely rewarding. So for now, my only adventures are inspiring people across the world and carrying on the essence of the world bandit and I set out to do—make people smile and help them find a reason to be happy!”

Charlie rescued Bandit from an animal sanctuary in 2015 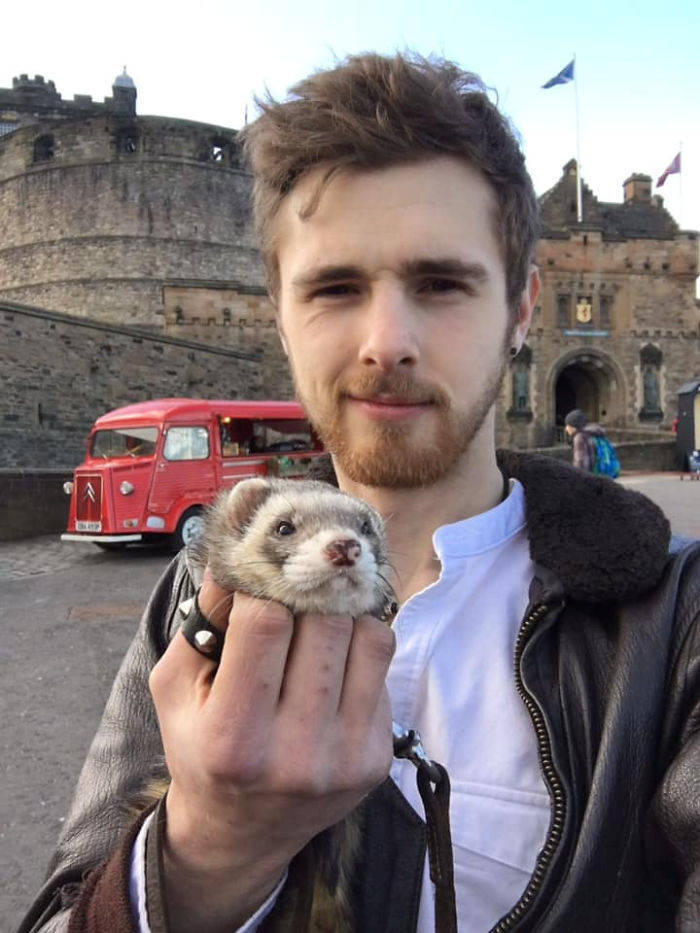 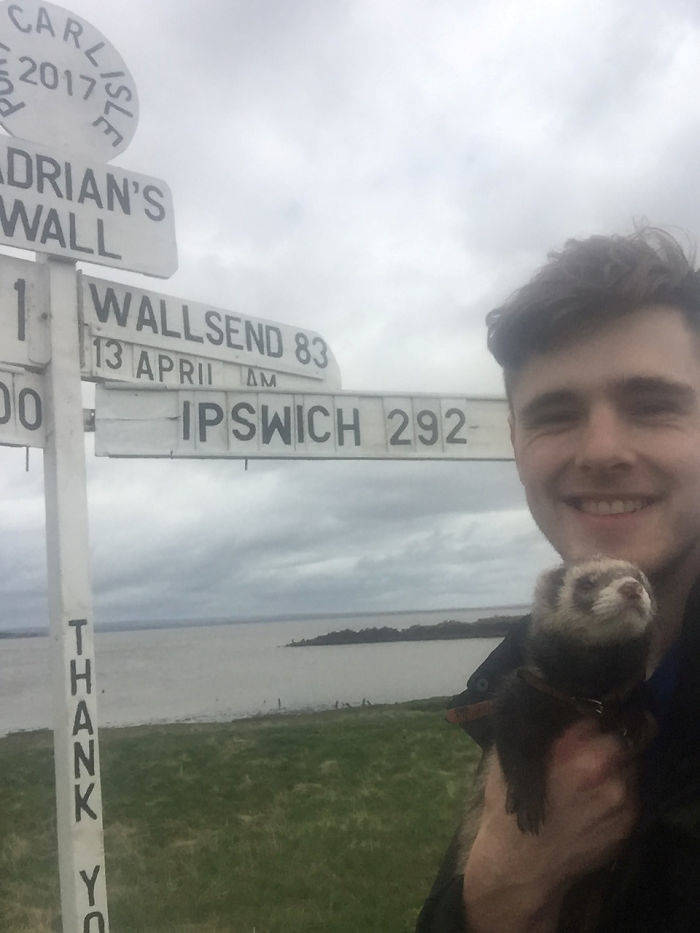 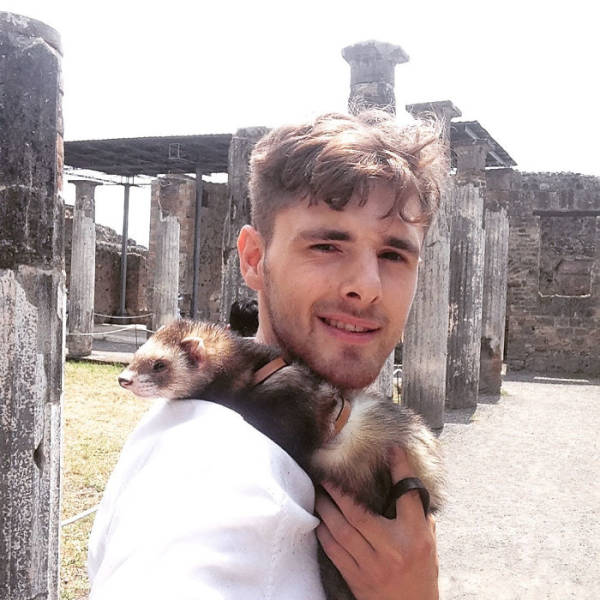 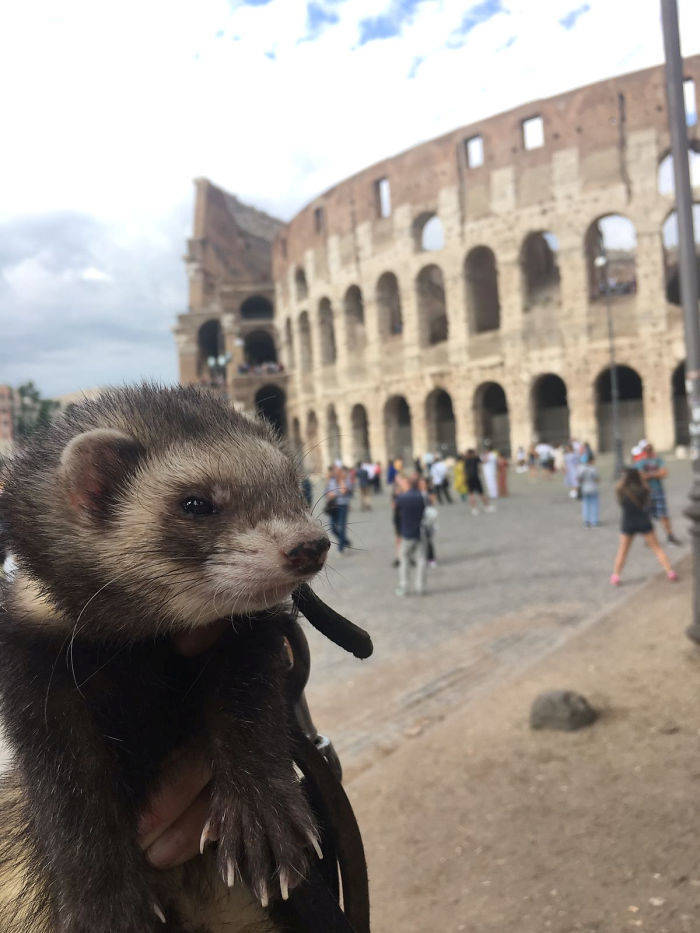 Bored Panda was also interested to know what people who feel tied down at work or school should do if they want to travel but are afraid to do it.

“Start small and build up! I still remember the first walk I took with Bandit. I had dreams of seeing some amazing places, and I always knew I would, I never talked myself out of being able to see these places.”

Charlie continued: “Within 2 years. Bandit and I went from our first walk to having visited 14 countries, visiting countless BBC studios, winning awards, and most of all, seeing the best side of everyone we meet.”

“Tonight, just before you sleep, write down the goal of the destination you want to go to and who with, stick it above your bed, and even in those darkest times, you’ll find a reason to achieve that reality. Put so much emotion into it that a life lived without achieving that goal or similar will not be worth living. You’ll be amazed at your innate power to achieve what you set your mind to,” Charlie said.

He added: “If you don’t, just ask yourself, what’s the alternative of not living the life you have in mind for yourself. If that alternative doesn’t make you smile, which it won’t, you’ll know the alternative isn’t worth living for! Go get ‘em, tiger!” 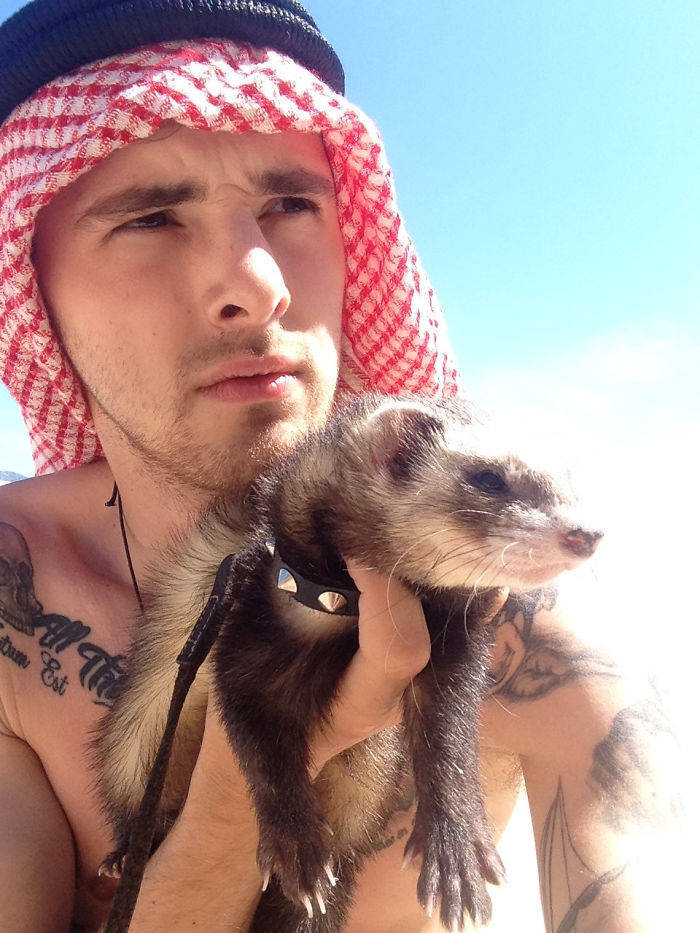 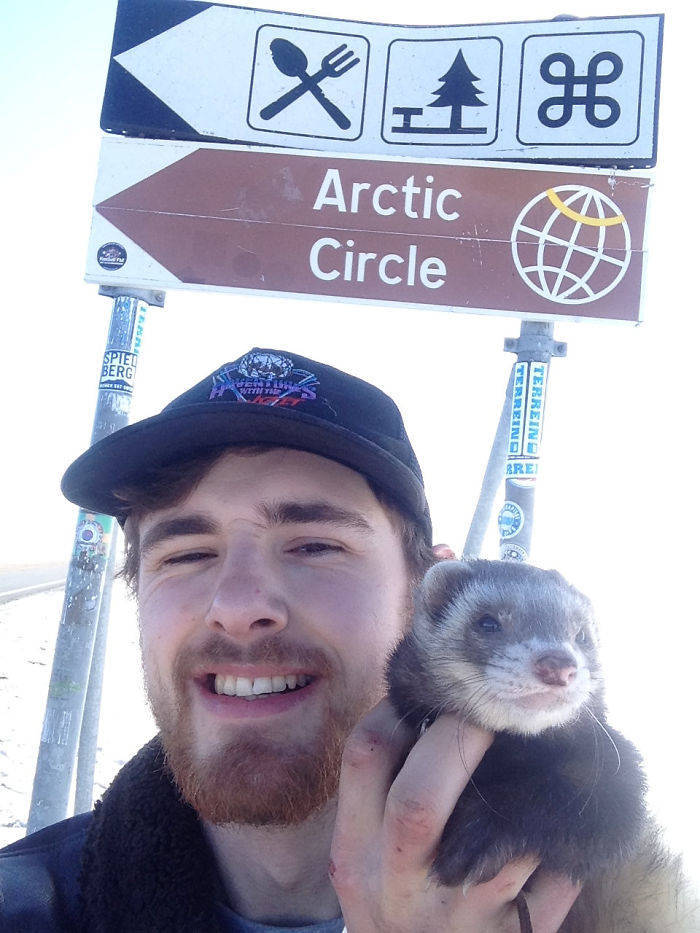 “Travelling was the most amazing experience of my life and it was completely liberating. We followed the sun across the world and camped under the stars in amazing places. It was beautiful and I spent it with my best friend,” Charlie told the media. “I have less money now but I am much wealthier as a person.”

The Brit rescued Bandit the ferret from an animal sanctuary back in 2015 and even had him stay with him while he was working for the RAF in Coningsby.

In March of 2017, Charlie lost his mother who was just 53. After that, his best friend Will Moss passed away at the age of 22. That same year, Charlie’s adopted mother died from a heart attack. Charlie was depressed and had suicidal thoughts at that point.

But his mental health quickly improved when he set out to travel with Bandit. Together, they raised awareness for various charities, including for motor neuron disease which his mother suffered from.

“It was horrible for me but I didn’t want to get into a rut because of it all. I did think about killing myself a couple of times. I didn’t know where to turn. It took a lot of courage for me to do what I did. At the time I was living in a nice flat, had a good job and had three cars,” he revealed. “I had a lot of savings behind me and I was lucky enough to be very secure. But it was all just ‘stuff’ to me and didn’t really mean anything. I decided to get rid of the lot — and set off with Bandit.”

According to Charlie, he visited some “incredibly scenic places” and “camped next to some of the most famous places in the world.”

“It was incredible to do it with Bandit. He has seen me at my best and my worst and has always been with me. Bandit has been with me through thick and thin,” Charlie complimented his pal. “The trip was completely liberating and I really did have an amazing experience. I needed to just go out and do something for me. It’s easy to get stuck in a rut but there’s no need to. I feel so much better for what I did.”

Compilation 1 year ago
TLDR if you are rich enough you can just quit your job and travel a lot.
Reply
1

Predator 1 year ago
Yup must be nice, I lost a lot but can hardly afford to travel to the corner store.
Reply