“The Simpsons” Have Recreated Tons Of Famous Photos! (15 PICS) 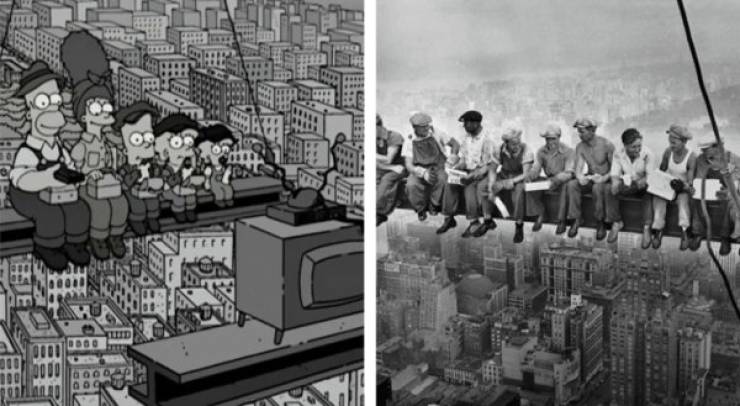 They definitely did not have stunt doubles when the original picture was taken in 1932. 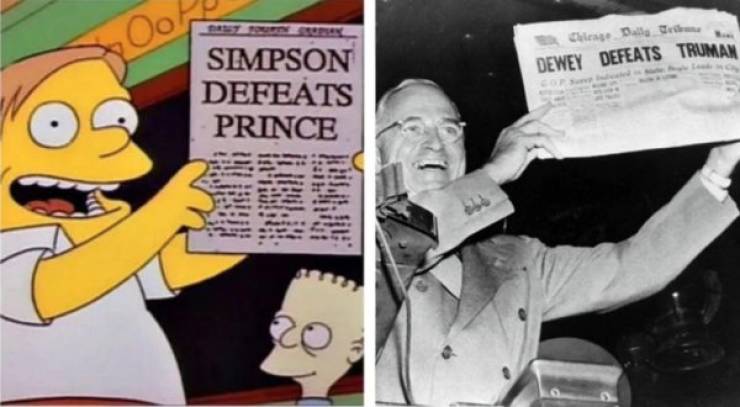 Just like Truman, Martin Prince unexpectedly defeats Bart in an election for class president (after no one but Martin and his friend Wendell actually vote), and he holds up the erroneous headline from The Daily Fourth Gradian after his win.

The Duff Blimp Suffers The Same Fate As The Hindenburg. 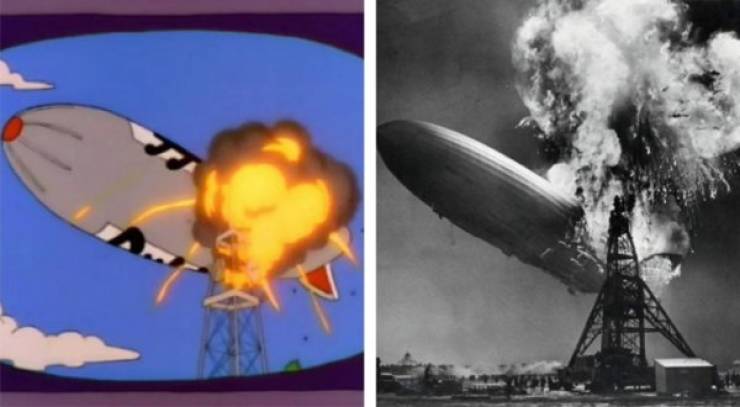 Barney wins a chance to pilot the Duff Beer blimp, the scene ends the same way. Newsman Kent Brockman exclaims, “Oh, the humanity,” which were the same words famously uttered by Herbert Morrison, a radio journalist covering the event and, ultimately, the disaster. 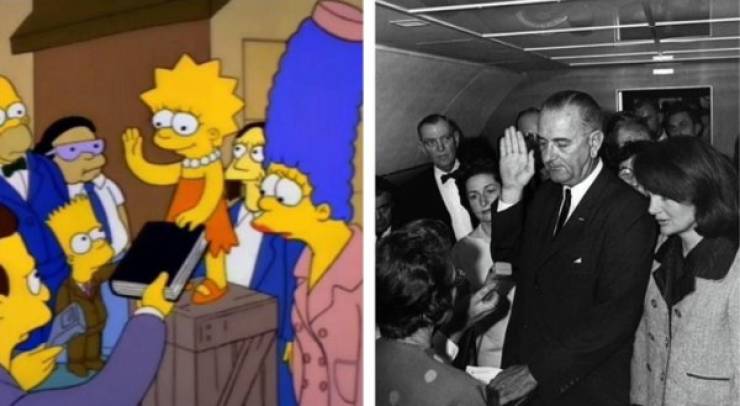 Lisa comes in second for the Little Miss Springfield pageant, but takes over the title when the winner gets struck by lightening.

When The Simpsons Leave Australia, It Mirrors The Famous ‘Fall Of Saigon’ Helicopter Pic 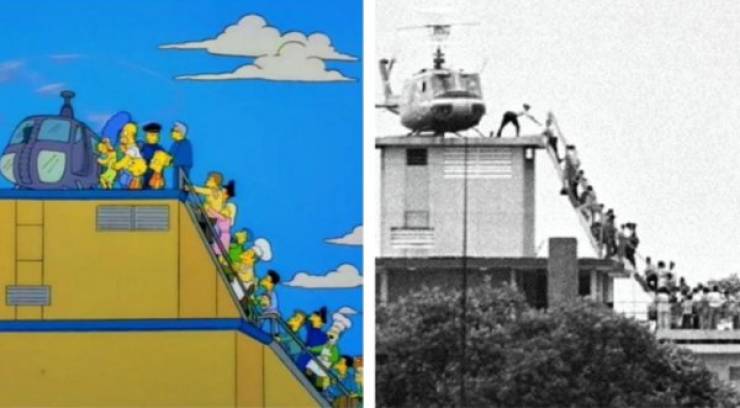 The Simpson family takes a trip to Australia during the sixth season of the show so Bart can personally apologize for an international phone calling prank that’s gotten out of hand. But instead of apologizing, Bart continues to antagonize the Australians, and the family has to flee in a helicopter while a local mob chases them.

The Be Sharps’ Second Album Mirrors The Beatles’ ‘Abbey Road’ 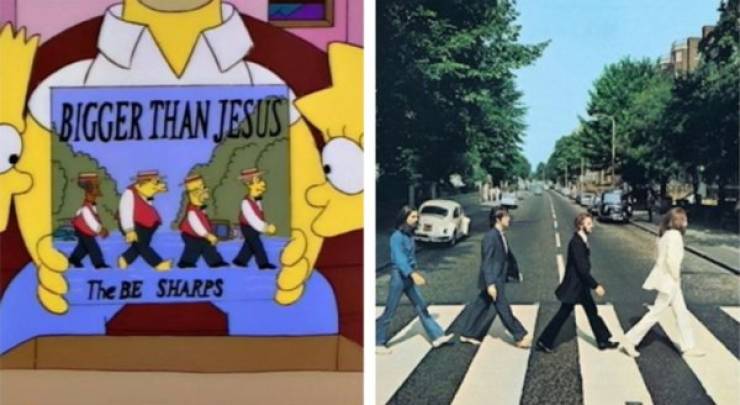 One episode details Homer’s time in “The Be Sharps,” a barbershop quartet whose arc plays out an awful lot like the real-life Beatles. When Bart asks Homer if they ever screwed up like the Beatles and claimed they were “bigger than Jesus,” Homer replies, “all the time! It was the title of our second album,” and pulls out the LP. The title pokes fun at a real-life John Lennon comment that the Beatles were “more popular than Jesus” in an interview in 1966.

When Milhouse Cries, He Channels The ‘Weeping Frenchman’ Photo From 1941 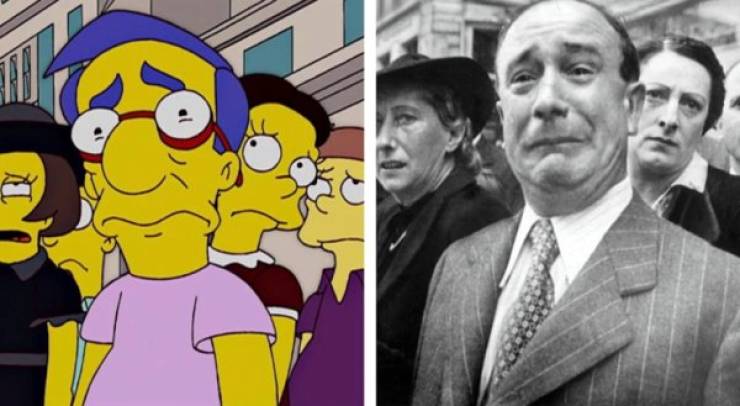 As French regiments marched through Marseilles on their way to Africa, an onlooker (Jérôme Barzotti) epitomizes the reaction of the fallen nation as the exiled troops leave the country. The image appeared in the 1943 propaganda film, Divide and Conquer.  For Milhouse, his lamentation comes from the dismantling of all-things-children, including a local toy store.

Grandpa Sits In The Middle Of A Famous ‘Woodstock’ Photo 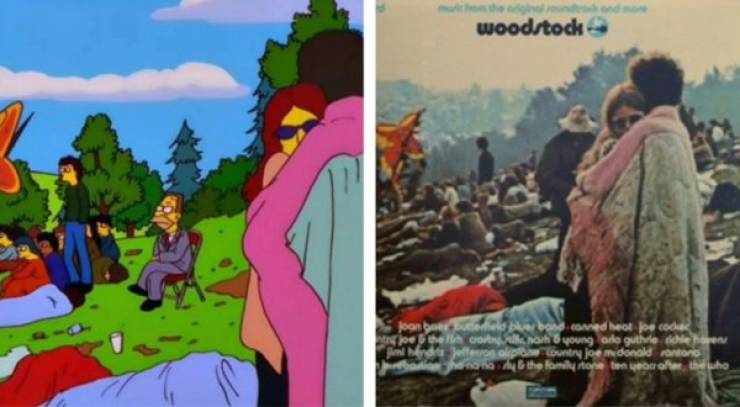 We see a flashback of the ultra-square Abe Simpson dragged to the festival by his free-spirited wife, Mona. A young Homer was present too, although he was much more receptive to Hippie culture. 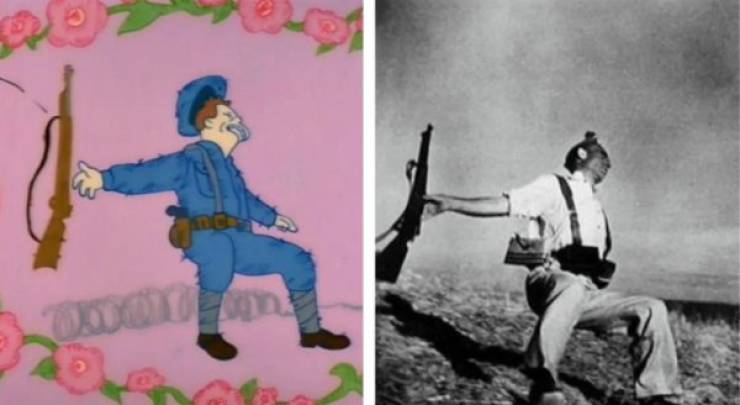 “Falling Soldier” was a photograph taken by Robert Capa during the Spanish Civil War in 1936. Initially an anonymous image, the picture captured the exact moment a bullet hit one of General Francisco Franco’s soldiers, providing a jarring realism that would go on to characterize 20th century war photojournalism. 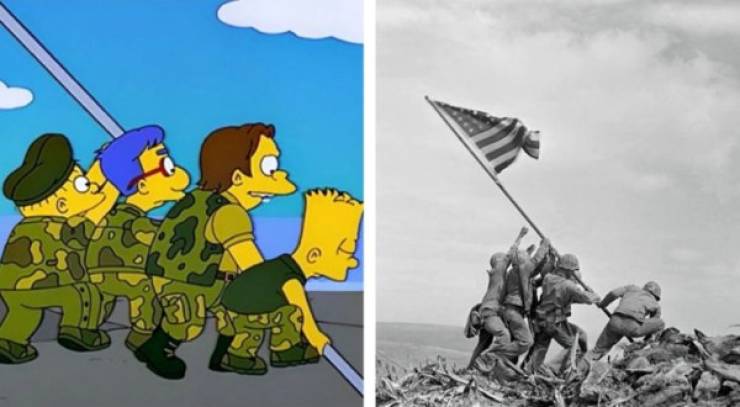 The Simpsons has referenced this famed photo several times, like the episode where Bart joins a boy band that’s revealed to be a recruiting tool for the navy.

Ravi Shankar Appears On ‘Classic Krusty,’ Reminiscent Of His Appearance On ‘The Dick Cavett Show’ 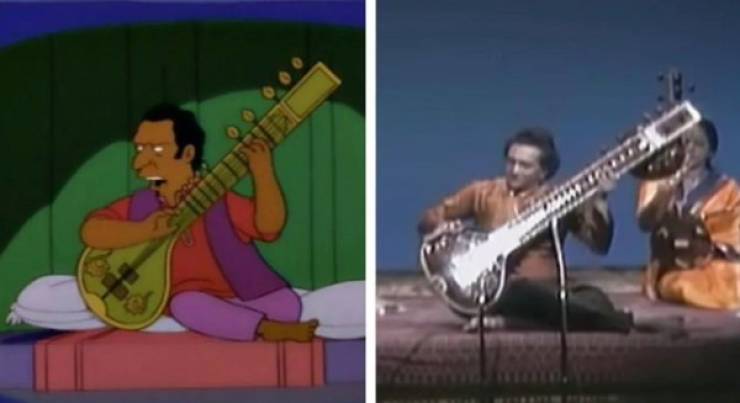 When Bart is stuck inside all summer with a broken leg trying to watch a marathon of “classic” Krusty The Clown Show episodes that are extremely boring, he catches an episode where Shankar plays sitar on The Krusty the Clown Show, complete with a flubbed Krusty introduction. In real life Shankar was famous for his collaborations with George Harrison, among many others. 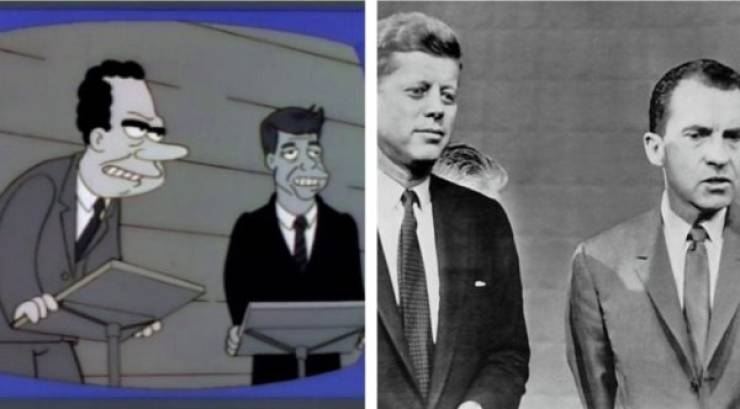 During a tour of the Duff brewery, visitors are shown historical commercials for Duff Beer. One commercial features Richard Nixon and John F. Kennedy, parodying the famous televised debates between the two men in 1960. During the commercial, Nixon appears as a curmudgeonly contrast to the attractive, charismatic Kennedy – comparable to how the actual debates were perceived by the American public.

Mr. Burns And Richard Nixon Both Have A Pic With Elvis 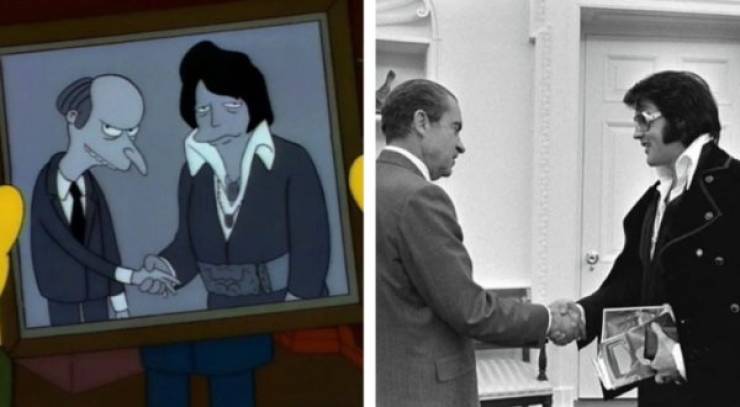 Presley’s goal from the meeting was “to get the credentials of a federal agent,” something he achieved when Nixon gave him a Bureau of Narcotics and Dangerous Drugs badge. 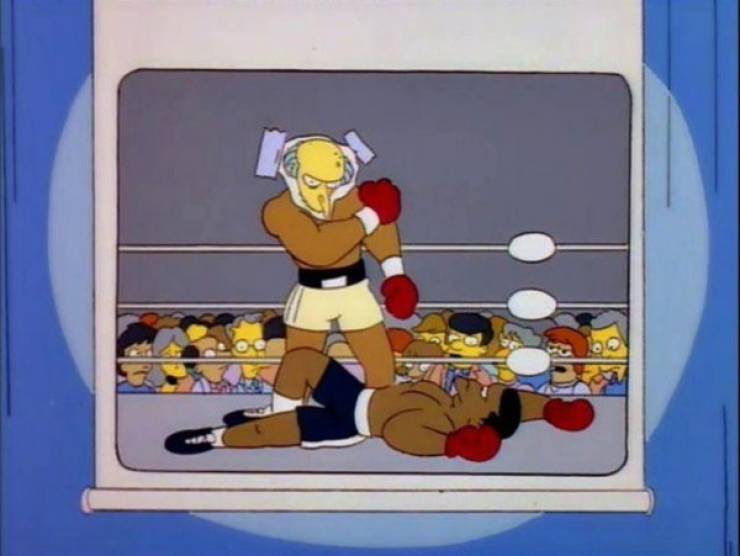 For Mr. Burns’ birthday, Smithers prepares a slideshow entitled “Montgomery Burns: A Life,” which features a series of bizarre and overtly fake pics from the life of Homer’s boss. One such pic features Burns’ head inserted onto Ali’s as he stands victoriously over Liston (as well as pics of Burns raising a flag at Iwo Jima and posing in Marilyn Monroe’s famous white dress.) 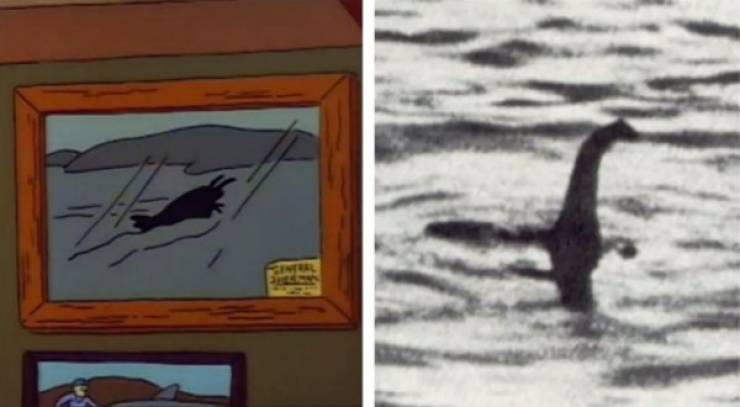 General Sherman, the legendary catfish that lives in the depths of the aptly named Catfish Lake is, according to lore, “a hundred years if he’s a day.” An image of General Sherman that hangs in the bait shop at Catfish Lake looks much like a widely-circulated photo of the so-called Loch Ness Monster in Scotland. 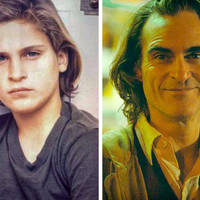