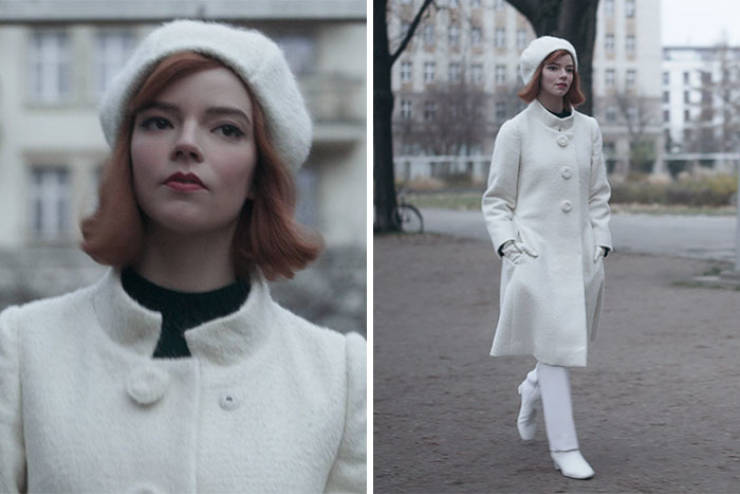 For her last outfit in the final episode, Beth is wearing a glamorous all-white outfit with a hat. Along with the bubble on the top of the hat, the outfit turns Beth into a visual representation of the white queen chess piece. "The idea, of course, is to convey that she is now the queen on the chessboard and the chessboard itself is the world," the show's costume designer Gabriele Binder said in an interview with Vogue.

Alma's Death Might Have Been Foreshadowed In This Scene 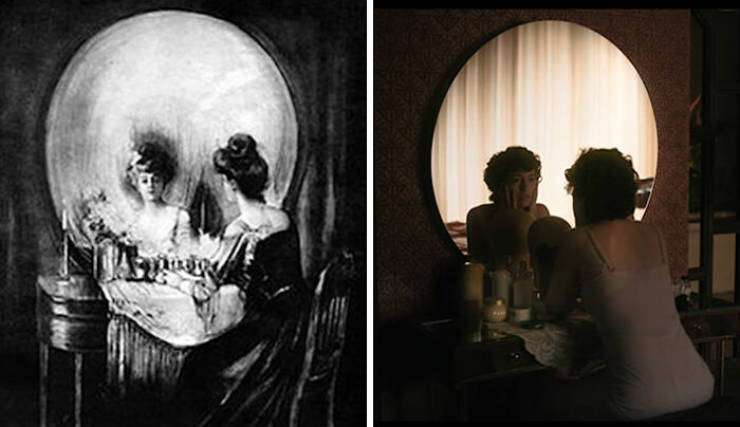 One of the most fascinating details that most viewers have probably missed was this one pointed out by a user on Reddit. In this scene, Alma is seen looking in the hotel mirror—the setting of the shot resembles a famous visual pun drawing by the 19th century illustrator Charles Allan Gilbert called "All Is Vanity." The illustration portrays both a woman looking into a mirror and a human skull. This scene was the very last time Alma is seen alive in the show.

Cleo Might Have Been A Russian Mole Sent To Sabotage Beth 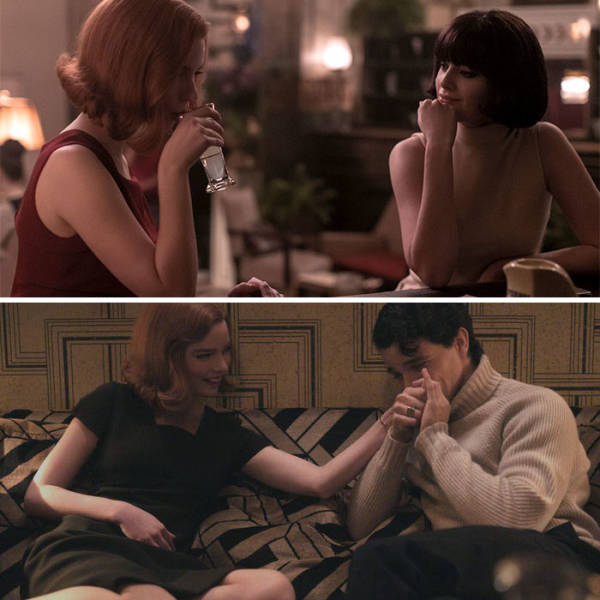 Cleo is a mysterious French fashion model who meets Beth at Benny's apartment and then, the night before Beth's game against Borgov, she tempts Beth into an alcoholic binge. A lot of viewers find it suspicious the way Cleo shows up coincidentally the night before Beth's vital match with Borgov. There's a theory going around on Reddit that Cleo was actually working for the Russian teams to sabotage Beth. Considering that, it makes sense why she doesn't appear ever again in the show after Beth's match.

And in case you'd like more convincing, there's a scene in the last episode when Beth asks Townes how he managed to get a visa at the last minute and he reveals that the Russian embassy may have helped since they thought he would distract her. As you may remember, Cleo was the only person to whom Beth revealed her feelings for Townes. And it raises a natural question—how would the Russian embassy know that Townes could be a distraction for Beth?

Whenever Beth Plays Chess On The Ceiling, It's Always With Mr. Shaibel's Original Set 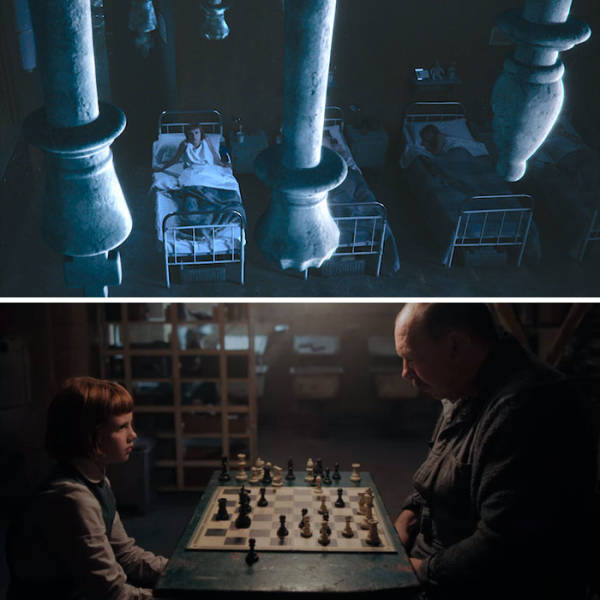 Throughout the miniseries, there are many scenes where Beth is visualizing a chess game on the ceiling. If you look close enough, you'll notice that in each of the ceiling games, the chess pieces are those she used when learning to play chess with Mr. Shaibel.

The Gameplay In The Show Is Precisely Authentic 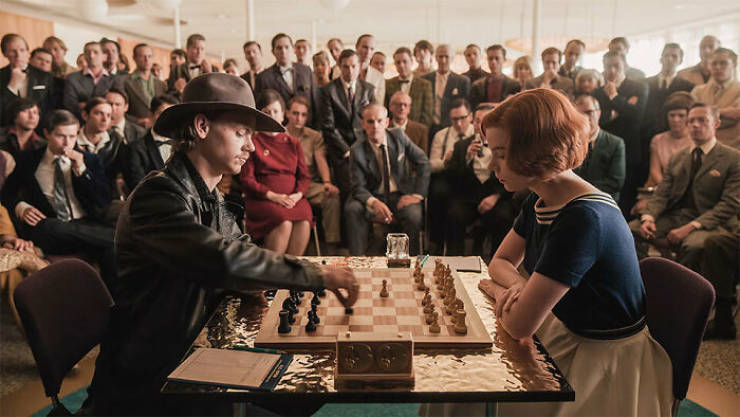 If you aren't a chess player, you probably won't notice and appreciate how authentic all the matches portrayed in the show are. In a press release prior to The Queen’s Gambit’s release, Netflix revealed that one of their main objectives "was to ensure that if a chess pro sat down to watch the series, they wouldn’t be taken out of the story because of the inaccuracy of any moves." 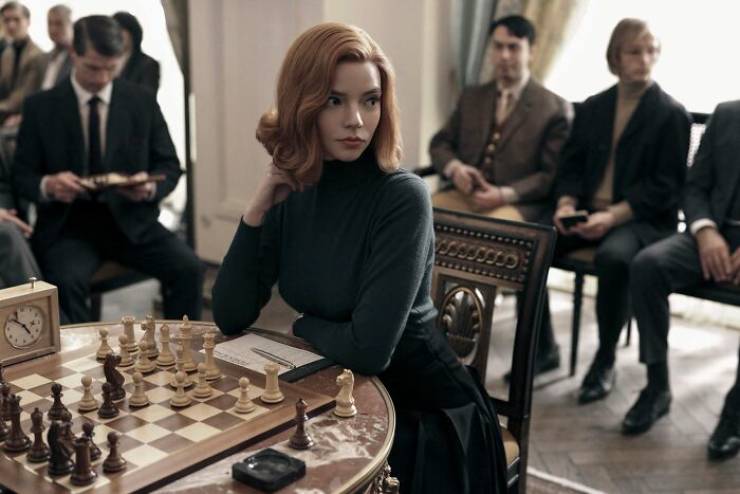 There's one interesting detail about the structure of the show. As you know, "The Queen's Gambit" miniseries consists of seven episodes. The show structure might be echoing the seven squares a pawn must cross on a board to become a queen.

Harry Beltik's Playing Style Was Based On A Real Chess Player, Magnus Carlsen 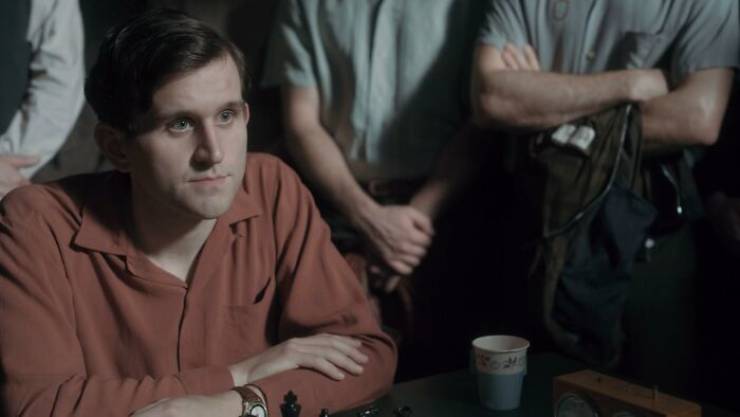 Most of the cast of the show didn't know how to play chess—the choreography of each game and the playing style of each character were planned out by real-life chess consultants and coaches. Then actors had to memorize how and when to place each piece for specific shots. Apparently, many of the matches and players were inspired by famous real-life chess players.

For instance, Harry Beltik's playing style was based on the Norwegian chess grandmaster Magnus Carlsen. "We each choose a character," the actor Harry Melling told Vulture in an interview. "I focused on a real chess player, Magnus Carlsen. He's very interesting because he's very quick and his hands are very straight in line with the pieces." 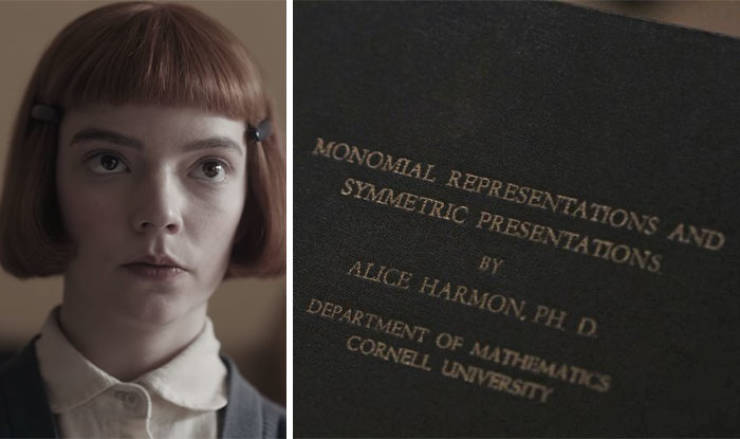 In the very first episode, Beth is seen picking up a book written by her mother, Alice Harmon, titled "Monomial Representations and Symmetric Presentations." This scene was an indication given to the audience that the girl's mom was a talented mathematician. Beth appears to have inherited this trait. Later in the series, there's one scene of Beth sitting in a math class and being the only one who could correctly define what "binomial" means.

One Of The Newspaper Clippings Mr. Schaibel Saved Has A Headline "Beth Harmon Proves Not All Women Are Stupid" 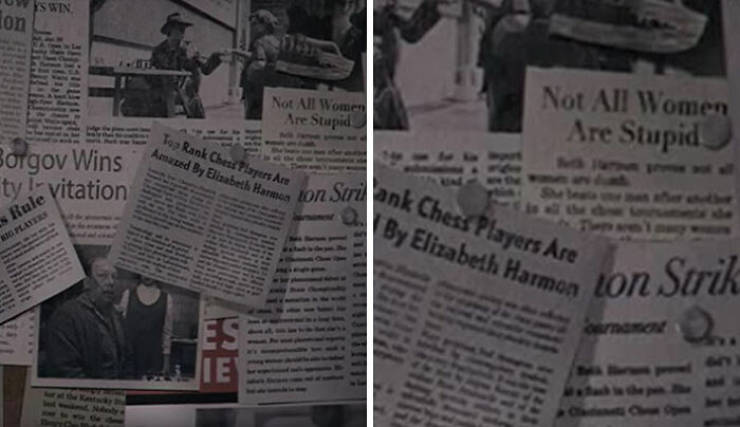 Among all the newspaper clippings praising and acknowledging Beth's success that Mr. Schaibel has saved in his basement office, there's one with an opening line saying "Beth Harmon proves not all women are stupid." This detail is yet another clue highlighting the misogyny Beth had to face.

In The Last Episode, Beth Still Uses The First Chess Set She Ever Bought 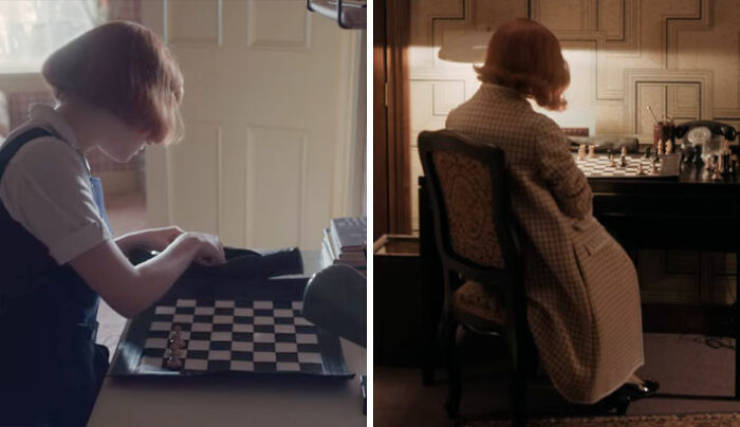 After Beth wins her first cash prize at a chess tournament, she goes shopping and buys her first-ever chess set. In episode seven, when Beth goes into her hotel room to work out how to beat Luchenko, she is seen still using the same chess set. 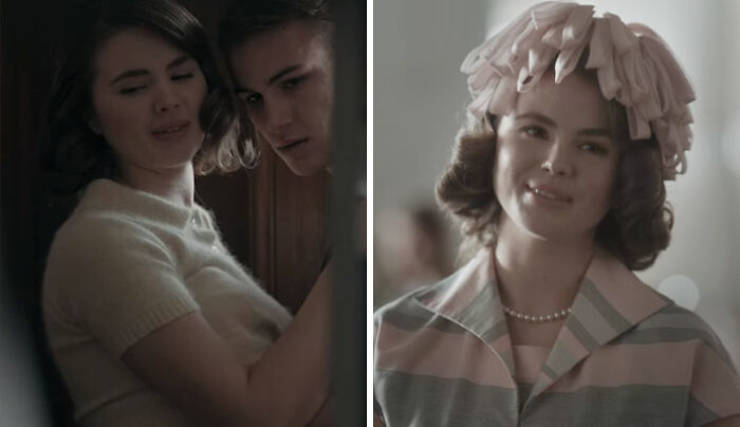 Margaret is the girl from Beth's high school who is seen bullying Beth for her brown chunky shoes. In one scene, Beth catches Margaret making out with her boyfriend in the school's library. In that very scene, Margaret says this: "I wouldn't be caught dead in Ben Snyder's." A few years later, in episode five, Beth runs into Margaret while shopping at Ben Snyder's department store. What can we say, a truly satisfying full-circle moment.

Towards The End, Beth's Shades Of Lipstick Become Similar To The Ones Alma Used To Wear 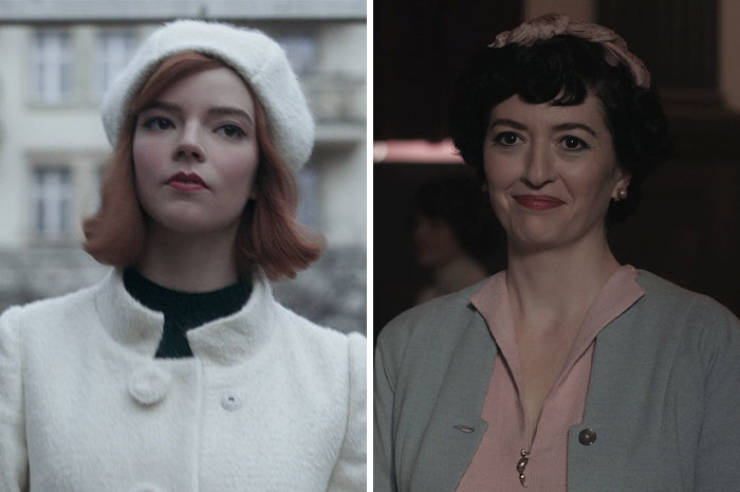 Turns out, there's a secret message behind the lip colors Beth wears towards the end of the show. "Alma's dark lipstick is one of her key characteristics. Makeup designer, Daniel Parker, planned that as the series progresses, Beth's own shades of lipstick are more and more similar, as an ode to her second mother," Netflix revealed in a video.

Throughout The Whole Show, Plaids And Checks Are Used In Beth's Outfits "To Evoke Chess Boards" 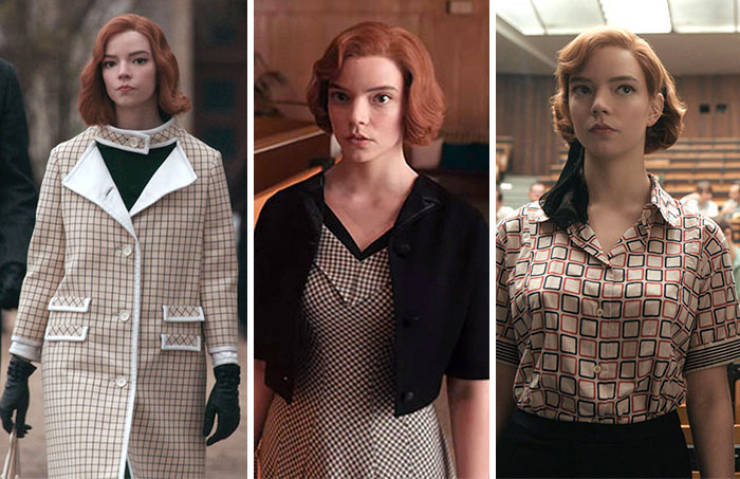 Many of Beth's outfits feature plaids and checks. "I always try to mirror what is happening inside a character with what they are wearing on the outside and the checks are something that I thought would be immediately interesting to Anya’s character, as she would intuitively choose to wear pieces that are connected to chess. The contrast of the check print also mirrors the nuances of the game itself—it’s decisive, it’s win or lose—which you would not have with, say, a floral print," the show’s costume designer Gabriele Binder said in an interview with Vogue. 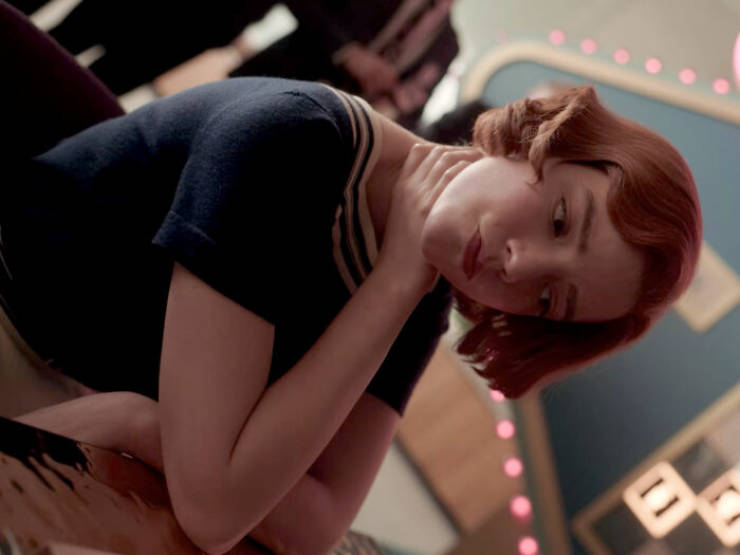 The 'Dutch tilt' or 'Dutch angle' is a cinematic shot in which the camera angle is deliberately slanted to one side. This technique is usually used to portray psychological uneasiness or tension in the subject being filmed. In the Las Vegas tournament, when Beth realizes she's about to lose to Benny Watts, the camera begins tilting and moving asymmetrically around Beth creating the 'Dutch tilt.'

With Her First Chess Winnings, Beth Bought The Shoes That All The Popular Girls Were Wearing In Her High School 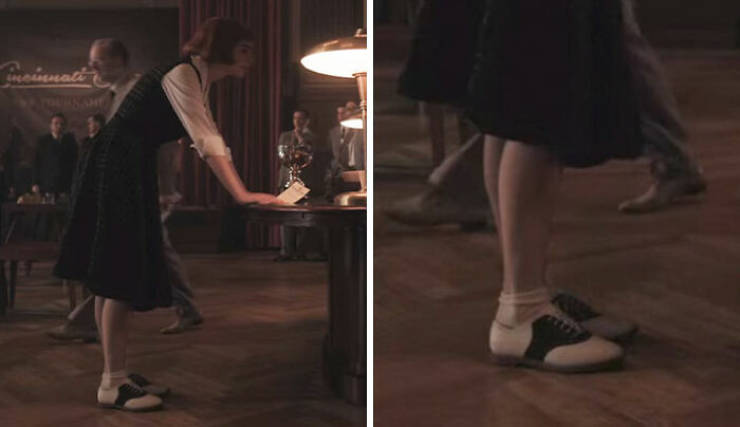 As you probably remember, on her first day of high school, Beth got bullied by the popular girls for her chunky brown shoes. In that same scene in episode two, the camera goes down to show that all these girls are wearing black and white Oxford-style shoes.

Later in the episode, Beth wins her first cash prize at a chess tournament and goes shopping—she buys her first chess set and a dress. But what you might not have noticed is that she also bought herself a pair of those shoes that all the popular girls wore. You can see Beth wearing them in the next episode when she and Alma arrive at the hotel. 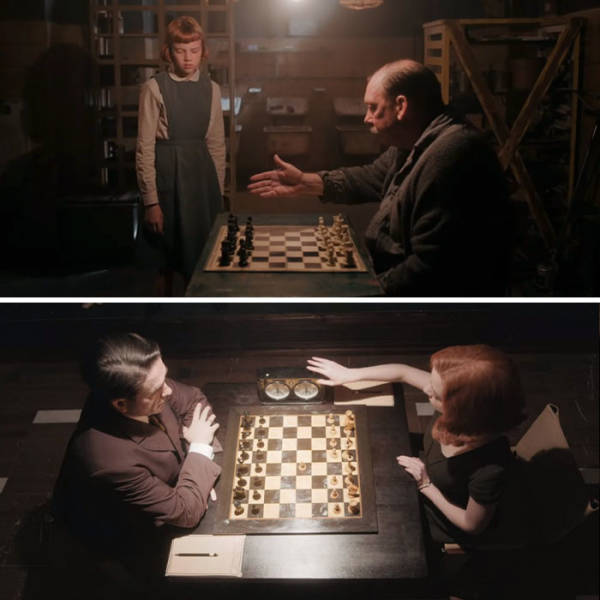 As you may remember, in Beth's first game of chess against orphanage custodian Mr. Shaibel, he plays white, placing him at an advantage. It all comes a full circle when Beth plays white in her final game against Borgov. 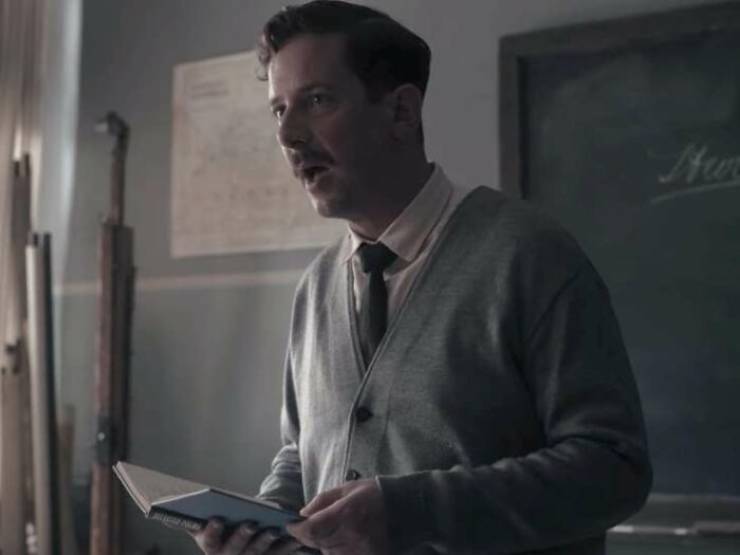 Throughout the whole show, there are quite a few references to real-life famous women who achieved success in fields mostly dominated by men. For instance, in one of Beth's school classes, the teacher is reading a quote from a poem 'Not Waving But Drowning' written by Stevie Smith. She won the Queen's Gold Medal for poetry and was awarded the Cholmondeley Award for Poets in 1966.

Another example—in her house, Beth's adoptive mother Alma had many prints by 19th-century French artist Rosa Bonheur. Just like Beth, Bonheur found success at a young age among the space of French painters, which then was mostly dominated by men.

In Her Final Match, Beth Wears A Dress Very Similar To The One She Wore In The First Episode 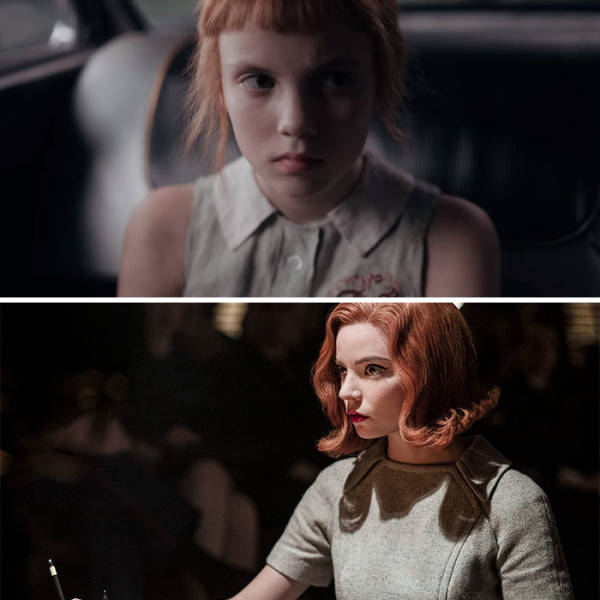 In the first episode, Beth is wearing a light grey dress with a collar. Fast forward to the last episode, during the last match, she is seen wearing the same color dress that also happens to have a collar. "In episode one, Beth is wearing a dress that her mother made for her, tenderly embroidered with her name. The colour of this dress represents Beth’s sense of ‘home’. We wanted to create a moment when she could once again come ‘home’, which is why she is wearing the same colour dress in her final tournament in Moscow—the dress she is wearing when she is winning. We wanted to use this colour to show that she finally feels confident and that her mother is with her," the show’s costume designer Gabriele Binder revealed in an interview with Vogue. 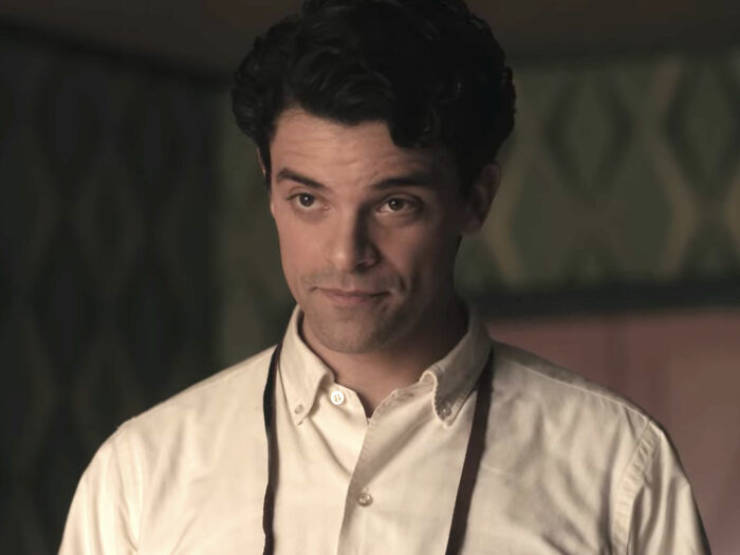 In episode three, when Townes was taking photos of Beth in his hotel room, he asked her to say "Ruy López!" which is one of the most common chess game openings. 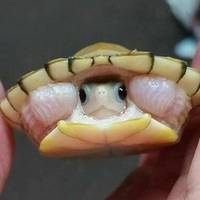 Roberta 10 month s ago
why is it misogyny all the time? ive met more women that think other women are stupid. shaming and vanity is in their blood.
Reply